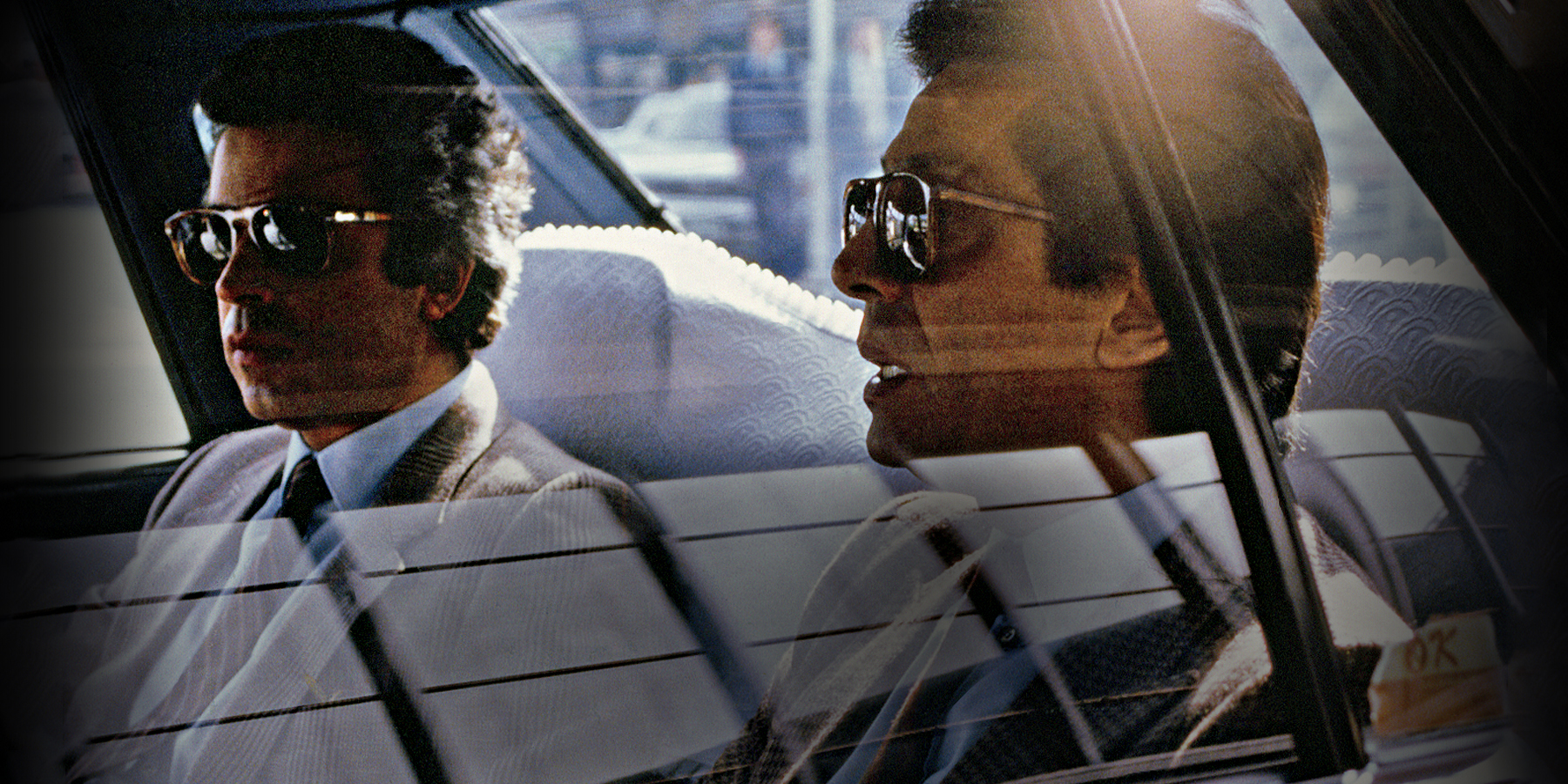 In Private, Giancarlo Giammetti, Valentino’s longtime partner, provides a scrapbook-style glimpse of the glamorous life that he and the Italian fashion designer have shared over the past 50 years. 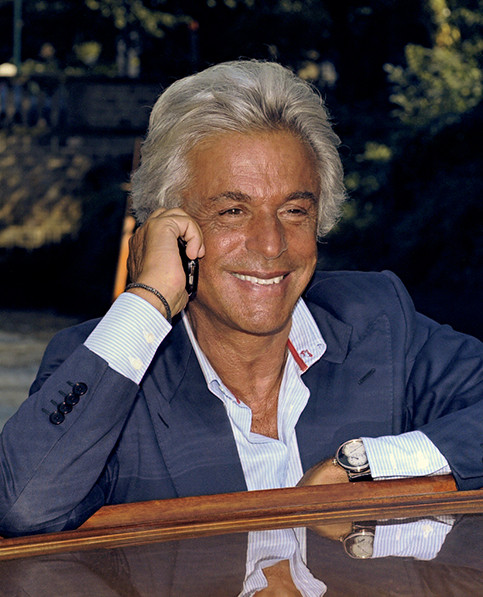 November 27, 2013Giancarlo Giammetti poses at the 2008 premiere of the Valentino documentary The Last Emperor; Assouline has just released a new book of his photographs of his and Valentino’s glittering world. Top: The duo drives through Rome in the 1980s, a decade during which Valentino became a true global brand. All images © Giancarlo Giammetti/Assouline.

Are you a person who likes your coffee-table books to be as large and as heavy as, well, an actual coffee table? If so, then you have plenty of new choices this seson. One of the most impressive — Private by Giancarlo Giammetti — weighs in at 12-plus pounds, but don’t let the heft fool you. Inside, the book is all lightness and gossamer.

If the name Giancarlo Giammetti doesn’t immediately ring a bell, then you are probably not a fashionista. Otherwise, you’d know that Giammetti is the longtime business partner of the Italian couturier Valentino. And if you saw the documentary The Last Emperor, a behind-the-scenes portrayal of Valentino and his world, you are aware that Giammetti was as instrumental to the success of the label on the commercial side as Valentino was on the creative. (Much to the dismay of their many fervent fans, the duo retired in 2008.)

The two were lovers first — beautiful young Italian boys from the north (Valentino) and the south (Giammetti) who met by chance at Rome’s Café de Paris in 1960. Valentino was a fledgling designer who wanted to launch his own business and asked Giammetti, who knew little about spread sheets, to join him on the journey. Their dream clientele: the world’s most elegant and, more often than not, aristocratic women.

Nothing succeeds like talent, and Valentino Garavani had it in abundance. Creating beautiful apparel for the likes of Marella Agnelli and many more of Italy’s wealthiest ladies led to commissions from Babe Paley, Gloria Guinness, Jayne Wrightsman and others on the international best-dressed list (when it still meant something). They sought out Valentino for gorgeous gowns, elegant daytime wear and even when they needed wedding dresses: Jackie Onassis, Marie-Chantal of Greece and, more recently, Anne Hathaway all wore Valentino down the aisle. They also searched him out for his company. To be one of Valentino’s chosen is to be part of one of the most elite of inner circles. 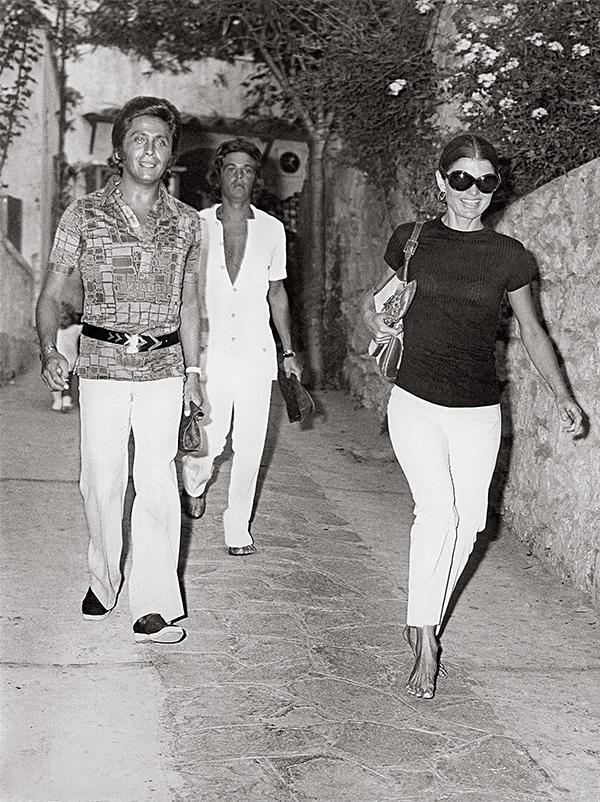 A photo of Valentino and Giammetti strolling with a barefoot Jacqueline Kennedy Onassis on Capri in 1971, illustrates, like all the images in Private, the pair’s glamorous life.

The Valentino business grew exponentially, expanding into accessories, fragrances, ready-to-wear and franchises, and it was sold several times. Still, Valentino and Giammetti remained in control until their retirement five years ago. All the while, Valentino was the star of the show with Giammetti content to be in the background, seeing that all ran smoothy, being his partner’s confidant and, as it turns out, taking pictures constantly.

Private: Giancarlo Giammetti, published by Assouline, is a head-spinning collection of these photographs, culled from some 57,000 images — including everything from Polaroids to cameraphone photos posted on Instagram. You could call it a chronicle of the good life, but, truth be told, it is an existence far better than “good,” because no two men in fashion have ever lived more sumptuously or glamorously or taken more pleasure in all that they experience together than Valentino and Giammetti.

No longer lovers — they haven’t been for years — but still inseparable, they have partied, yachted, skied, sunned (Valentino more than Giammetti), attended the ballet and opera, private-jetted around the world. They are the embodiments of la dolce vita; not even Fellini could have dreamed them up.

Their domiciles are many, each one more exquisite than the next. Valentino’s château outside Paris is fit for a modern Sun King. And there is no other apartment in Paris that could rival Giammetti’s 1930s Art Deco duplex, decorated by Peter Marino, situated on the Left Bank and filled with Twomblys, Warhols, a Picasso and furniture by Ruhlmann, Jean-Michel Frank and the Lalannes.

Private covers several decades of the Valentino-Giammetti “tribe,” as Giammetti calls them, living large. Apart from a few serious full-page portraits, there are many more snapshots, designed as collages, of pretty people at play. See them living it up in Capri, Gstaad, Hollywood, the Greek Islands, Paris, the French Riviera — everywhere one yearns to be. At Elizabeth Hurley’s wedding in Rajasthan, Giammetti wears a brocade Nehru jacket embroidered in gold and looking every bit the maharajah.

See them living it up in Capri, Gstaad, Hollywood, the Greek Islands, Paris, The French Rivier — everywhere one yearns to be. 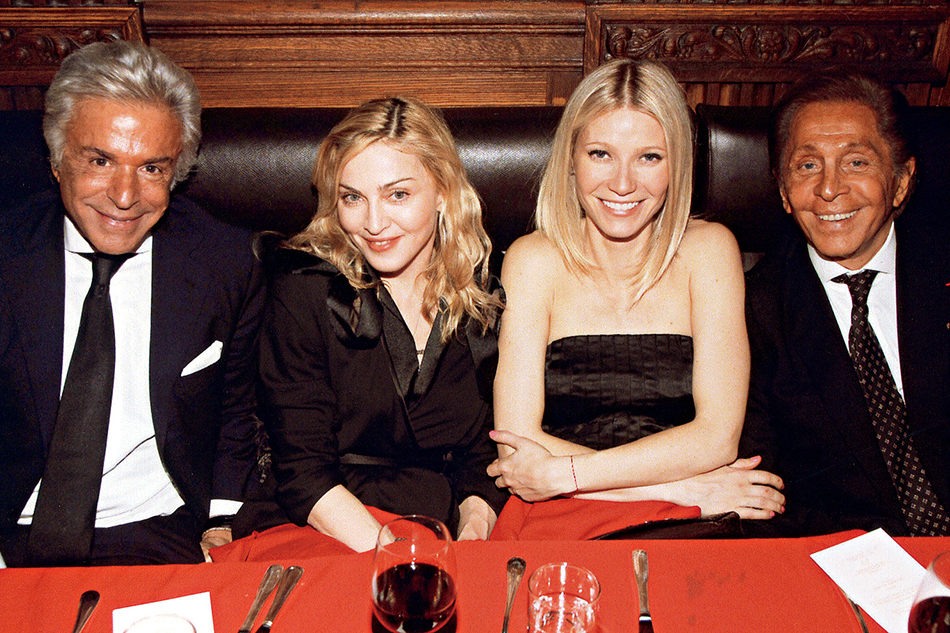 Madonna and Gwyneth Paltrow, shown here in 2008 at the Venice Film Festival, are among the duo’s star-studded inner social circle. 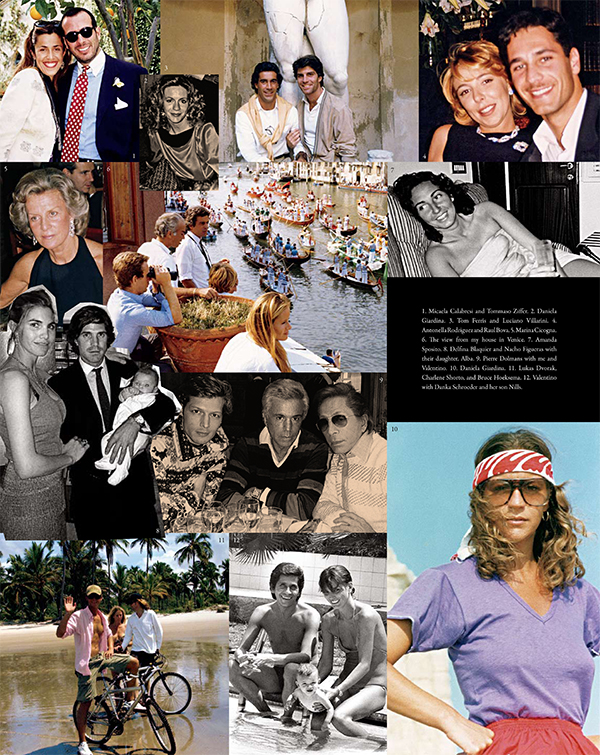 Scrapbook-style pages filled with Giammetti’s own snapshots give readers a candid view of his private life.

Even in retirement, Giammetti is busier than ever. Still handsome, his once-dark hair now silver, and ever charming and courtly, he is anything but boastful about his life and his accomplishments — even though he is entitled to be.

In New York for a series of parties timed to the release of his book, Giammetti recently spoke to 1stdibs.

You’ve taken some 57,000 photographs over your lifetime. How did you organize such a massive number of images, and where were they stored?

Thank God, they were very well organized in albums and in diaries, but I decided to hire a professional archive company in Italy to put them in order. It took two years.

And then you had to choose what would be in the book.

You say in the book that your major job was allowing Valentino to be Valentino. Is this still the case now that you are retired?

Well, you know Valentino is quite a spoiled man, but I adore him. He let me do whatever I had to do in my part of the business, and I tried to help him in any and every way I could. Maybe people know me a bit better because of the movie [The Last Emperor] and now the book. It was not my role or my choice to be a celebrity. 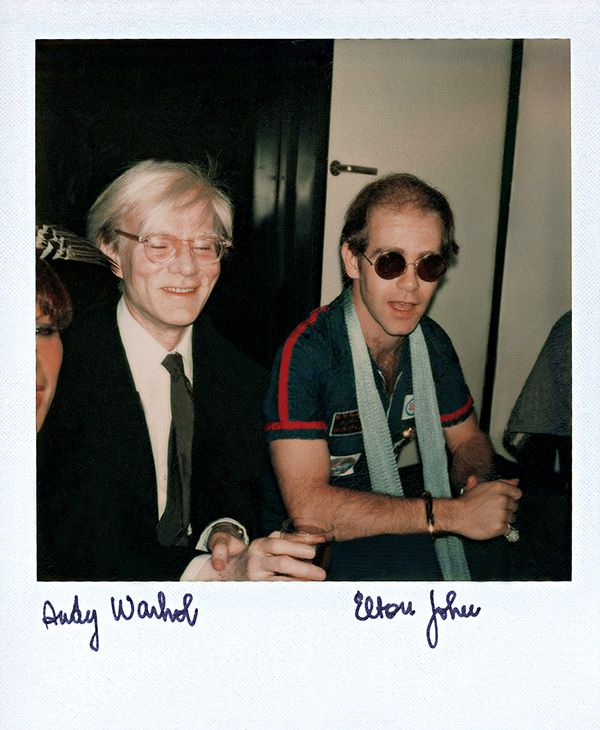 Giammetti photographed his friends, included Andy Warhol, at Club Sept, which, he writes, “was the coolest nightspot in Paris during the 1970s. Going there was like church — you couldn’t miss it.”

And speaking of the movie, what did you think when you first saw it?

I hated it. I felt naked. I thought it would be a nice little movie about fashion and glamour and the making of clothes for a collection. Then suddenly, it was about my life…my private life. We had long conversations with Matt Tyrnauer [the director] and, to his credit, Matt held very firm about his artistic freedom, which he had every right to do. In the end, I realized that it was a movie about two real people, not celebrities, with everyday challenges. Those who saw it loved that aspect of it.

You and Valentino have known and worked with the most beautiful and elegant women in the world — Babe Paley, Marella Agnelli, Audrey Hepburn, Grace Kelly, Elizabeth Taylor, Jacqueline Onassis and so on. Was there one quality they all had in common?

Yes, they were all powerful women. Their power, however, did not just come by virtue of money or family background. They were very concentrated on their vision and dedicated to their way of living. The only exception was Elizabeth, who was often distracted…going from one moment to another, but she had her reasons: her relationships with the men in her life, her own ongoing health problems and, most of all, her work to find a cure for AIDS. When people talk of Elizabeth Taylor today, they completely forget how generous she was and how much she did to raise money and awareness for AIDS research. 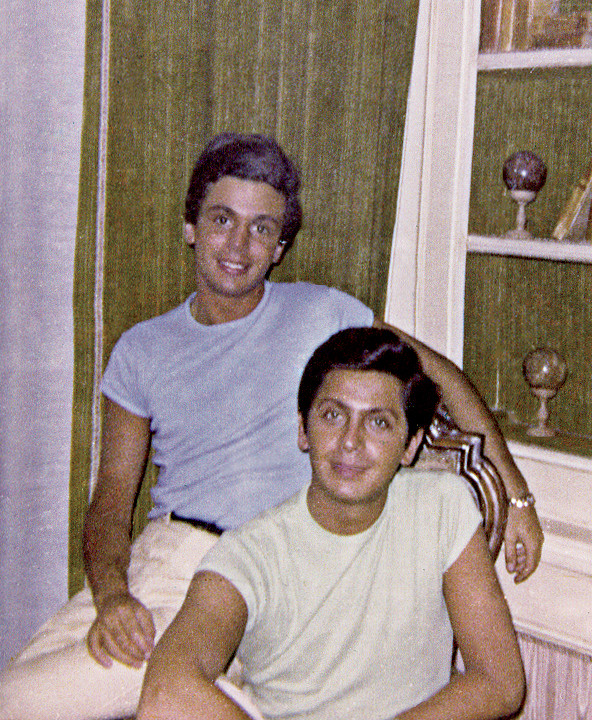 “Valentino was incredibly seductive, with his deep tan, blue eyes and soft but intense way of speaking,” writes Giammetti of their early days together. Here, they’re in St. Tropez in 1963.

Private covers different periods in your life. Was there one that stands out as “the Golden Age” for you?

Yes, the beginning, especially in the 1970s when we would come to New York and spend time with people like Diana Vreeland and Andy Warhol. At the same time, we were working in Italy, when Rome was a provincial place and life was less complicated, easier. Both were inspiring.

The book has put you front and center. How does this feel?

I didn’t do anything more than to create something to remember. It is a compilation of what I did. I always kept a diary and would write six lines every day. My camera helped me record the moments. This is a scrapbook of my life, nothing more.

Not all of the photographs were taken by you. There is a striking portrait of a young Giancarlo on the back cover of the slipcase. Who shot that?

Francesco Scavullo. It was the first portrait ever taken of me. I treasure it.

You have a new apartment in New York…

It makes me feel like a tourist again. I am very high up and can see all of Manhattan. I simply love being here.

PURCHASE THIS BOOK
or support your local book store