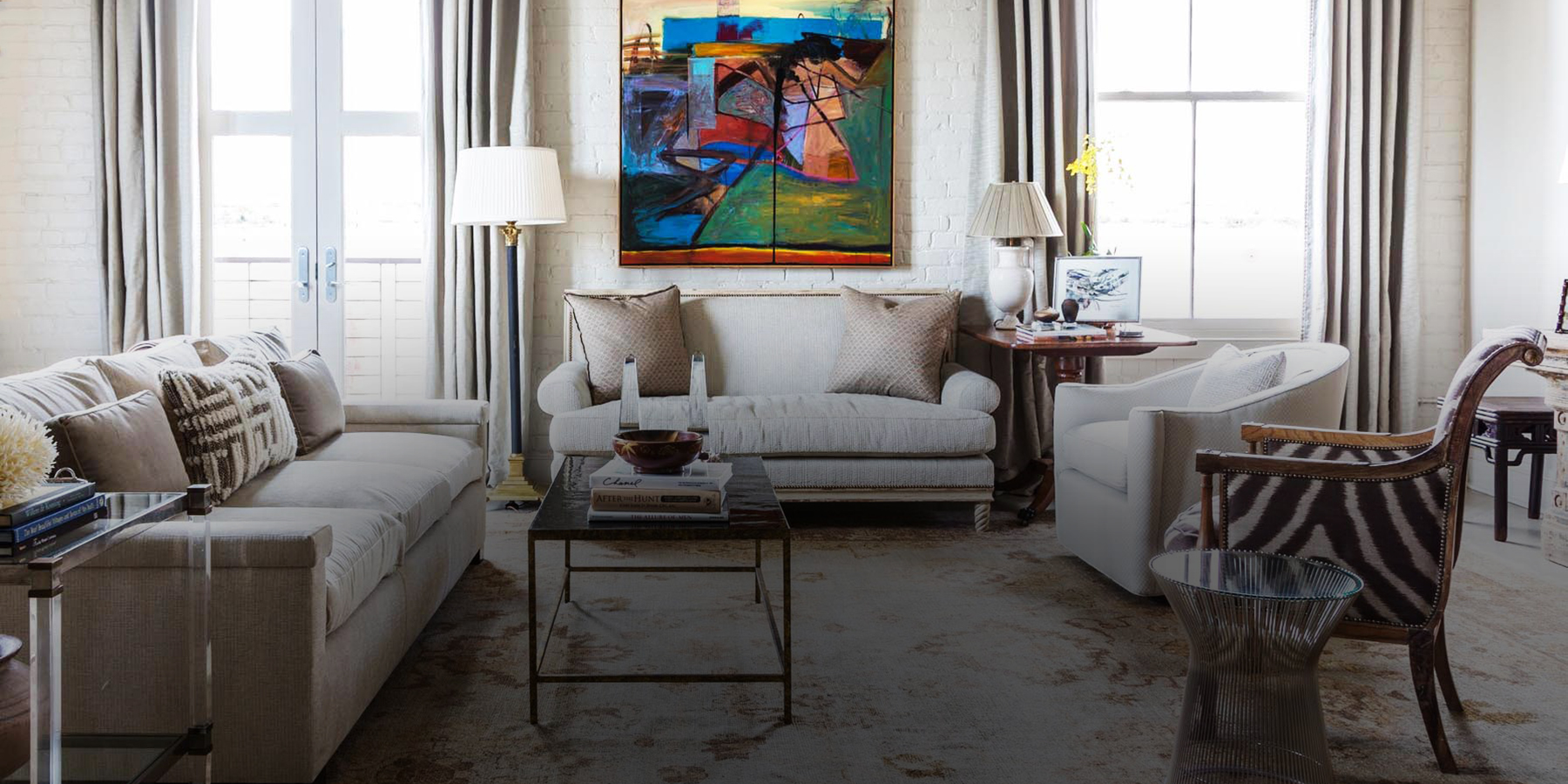 After studying and working in New York, Los Angeles, Rome and Copenhagen, these designing siblings are bringing their sophisticated style back home to the Big Easy. 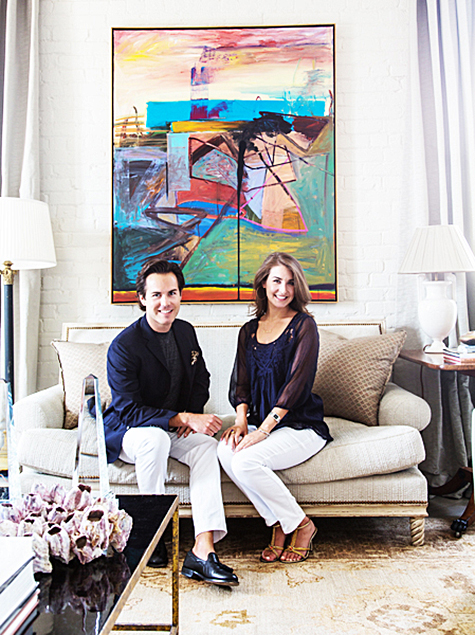 Not every set of siblings can start a successful business together. But for Christina and Chad Graci, working as a pair is working out quite well indeed. “Chrissy and I have always been very much on the same page with our lives and our careers and what we needed to do,” says Chad, before going on to joke, “And it just kind of makes sense: It’s not like we can have two businesses with the same name doing the same thing in the same city.”

Born, bred and now once again based in New Orleans, the duo formed their company, Graci Interiors, a few years ago, after returning to the Crescent City following a decade-plus of study, travel and work that took them, sometimes together, sometimes separately, to Rome, Copenhagen, Los Angeles and New York. Along the way, Chad, now 33, and a graduate of the five-year architecture program at Louisiana State University, put in time with Greg Jordan, David Easton and Bill Sofield‘s Studio Sofield, while Christina, 29, who studied interior design at LSU and is also a fine-art painter, worked under Victoria Hagan and Rogers & McDaniel.

New Orleans, however — where their father started his career as an architect before becoming a doctor — remained in their hearts and on their minds, exerting a constant influence on their aesthetic. “The city’s historic aspect and its architecture have always affected me,” says Christina. “We grew up visiting the French Quarter every weekend from our home in Metairie, seeing the buildings, the different antiques shops. The European feel is such an innate part of the city, and I think both Chad and I internalized that.” 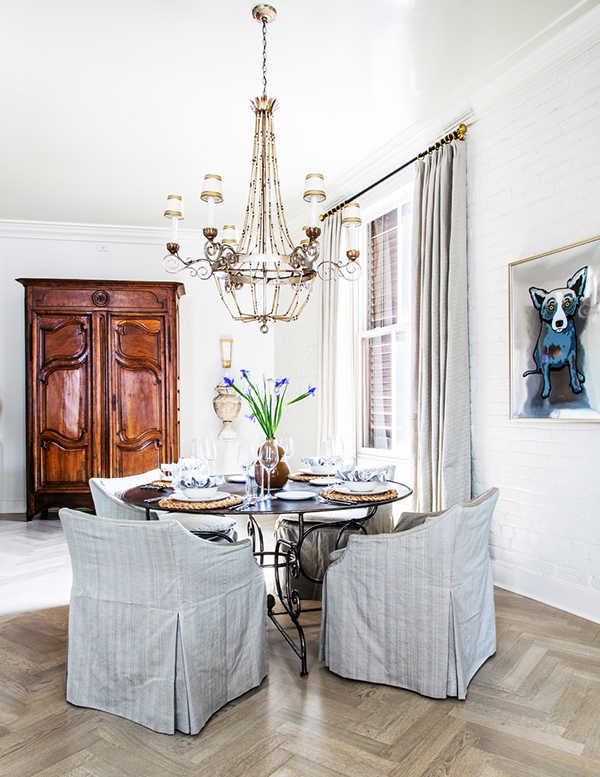 In a loft in New Orleans’s Warehouse district, the Gracis combined an 18th-century armoire, which conceals a mirrored bar inside, with contemporary art purchased at New Orleans Auction.

“We grew up in this place that was kind of not American, not European, but somewhere in between, with all these converging cultures,” agrees Chad. “You see it in the stores and the architecture, the nexus of all these different aesthetic periods, represented and juxtaposed one onto another. It really makes you look at the way you put things together as a designer.”

“And nothing here was new or bright and shiny,” Christina continues. “Everything had a story, and that gave us this huge appreciation for anything that is vintage.”

“Generations of Southern people have hauled around things from great-grandmother to grandmother to mother,” concludes Chad. “Everyone held on to everything, and that helped us learn to reuse and repurpose the same stuff but to make it new and fresh.”

Since its inception, Graci Interiors has been commissioned to create showhouse rooms for both NOLA Fashion Week and the New Orleans Home & Design Show, and New Orleans Auction asked the firm to curate a vignette of lots for one of its recent sales. Currently, the siblings are keeping things fresh at their new studios on Magazine Street. Chad just completed the restoration and renovation of a light-filled, neutrally toned, luxed-up loft in the city’s Warehouse District, and he’s now turning his attention to a pared-down raised Victorian near Audubon Park. “I’m excited about it because the client has an incredible collection of English antiques from the eighteenth and nineteenth centuries,” he says of this commission. “We’re going to use a lot of that, then pair it with slick twentieth-century pieces, lots of Karl Springer and Paul Evans from the seventies.” 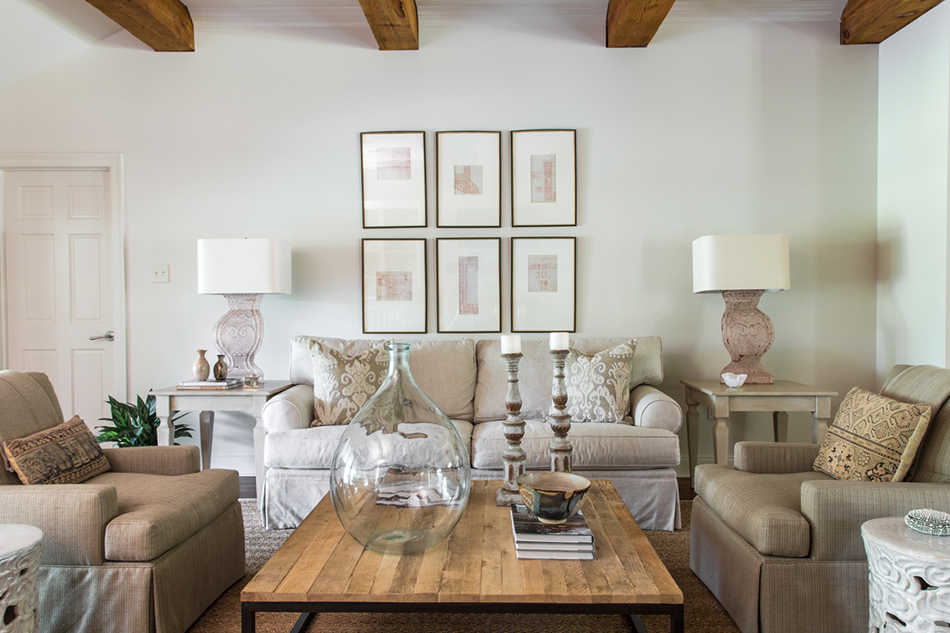 In the family room of a home in Baton Rouge, Louisiana, a symmetrical arrangement of furniture and accessories makes the open floor plan feel more intimate. 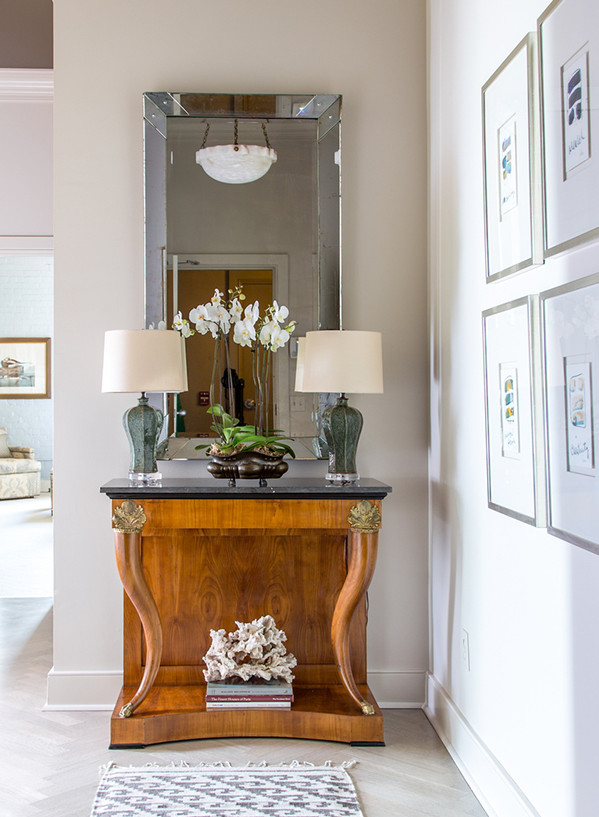 The entryway of the Warehouse District loft shows off Chinese earthenware lamps and a French Art Moderne mirror from Houston’s Carl Moore Antiques; the wool runner comes from a market in Puerto Vallarta, Mexico.

Christina, meanwhile, has taken on the big-picture exterior and interior schemes for a new 100-home residential development in Baton Rouge, where she will also decorate the model house, and she continues to paint, showing her soothing, abstract work at Baton Rouge’s Louis DeAngelo Gallery and Houston’s Segreto Gallery.

As for how they work together, even on their separate projects, the Gracis admit to having very different design processes — his methodical, hers more organic — but they find that they complement each other well: “We’re very good at helping one another out, bouncing ideas off each other,” says Chad. “It’s an invaluable thing to have another set of eyes you trust.”

But when you’re working all-day, every day beside your little sister or older brother, surely it can’t all be smooth sailing, right?

“There are bumps along the road, of course,” admits Chad. “And we have our moments — we’re siblings — but five minutes later we’re all, ‘Ok, where are we going shopping?’”

Chad: A mix of Holy Ghost, the Generationals and Grace Jones

Chad: I’m really into Clyfford Still right now. I just paid a visit to the Clyfford Still Museum, in Denver, and was really moved not only by the incredibly chic, understand architecture of [Brad Cloepfil’s] spaces, but also Still’s evolution as an artist. One can really see the progression of the textural qualities and color choices in his works. Of course, I also admire my sister’s incredibly subtle, sophisticated work, and I’ve been proud to see her evolve as an artist over the years. 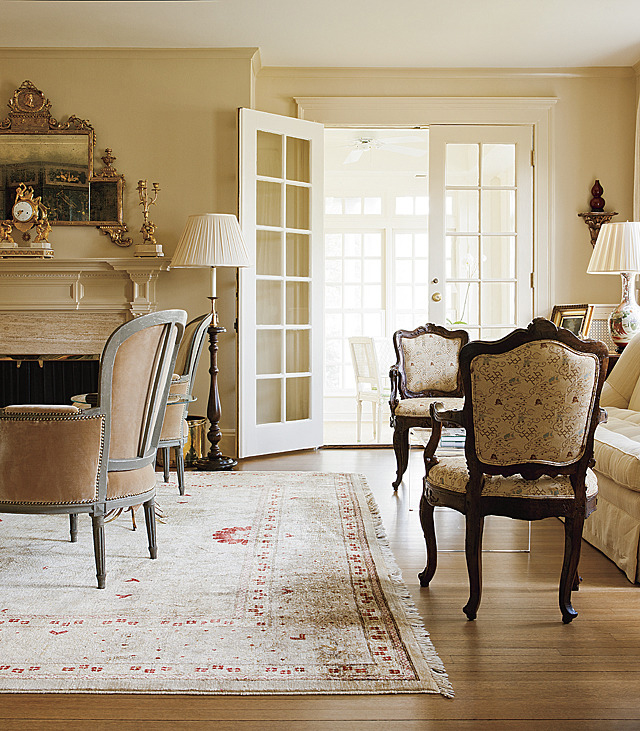 Christina: Being an artist has really made me appreciate the work of many others, from realist painters to more abstract artists. I love so many and am inspired daily by them, but I am an especially huge fan of Hunt Slonem and George Dunbar.

Christina: Color truly inspires me. I love finding new, unique hues to incorporate not only into my interiors but also into my artwork. I am absolutely inspired by other cultures and history as well. Chad recently took a trip to Italy and came home with some amazing photos of antique mosaic flooring and patterned antique textiles. The different shapes and color combinations are endless.

Christina: Suzanne Kasler’s use of color is inspirational, while I just love how Phoebe Howard mixes new and old furniture for a completely inviting and complete space. Victoria Hagan’s simple and precise approach to interiors really appeals to me, too. Working for her made me appreciate the idea of “less is more.” 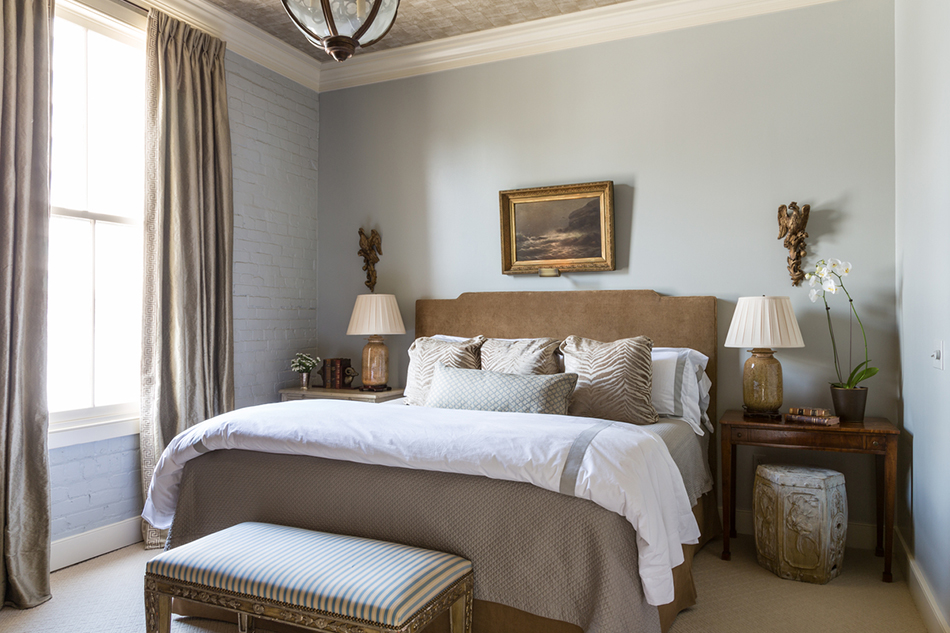 The color scheme for the loft’s bedroom grew out of Farrow & Ball’s Light Blue; the hanging bronze lantern is from Mac Maison, in New Orleans. 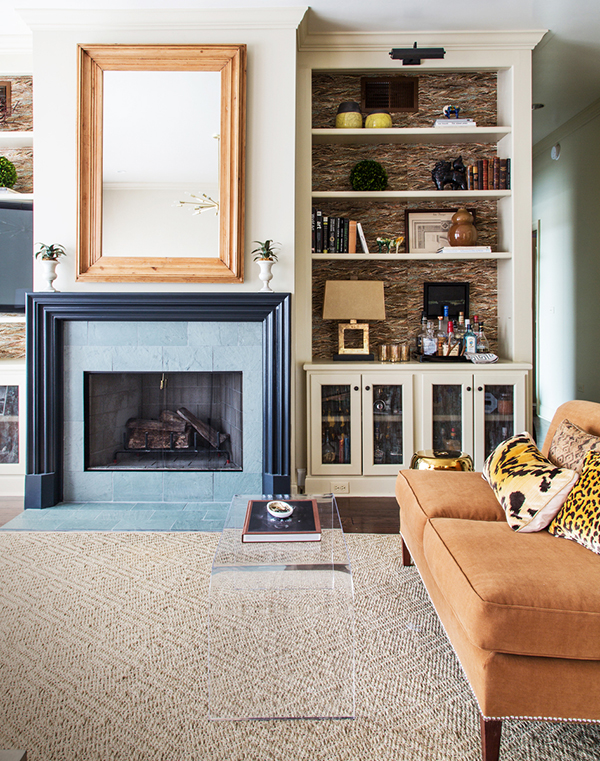 A range of rich earth tones, from brown to celadon, define this penthouse in downtown New Orleans.

Chad: Eleven 79, in New Orleans, and Dolce Vita, in Beverly Hills. (As you can see, I have a fondness for storied Italian restaurants.) Also: Cache Cache, in Aspen, and Babbo in New York.

Christina: Houston’s in New Orleans is definitely a go-to for both Chad and myself. We are always there and never get tired of the menu. Lately, I’ve been frequenting Le Petite Grocery, and Mr. B’s is always a staple.

Christina: The Windsor Court Hotel, New Orleans. My boyfriend and I are always at the Polo Lounge. The ladies in my family have had Christmas tea there yearly for more than two decades.

Christina: Once again, the Polo Lounge at the Windsor Court, listening to the nightly jazz band 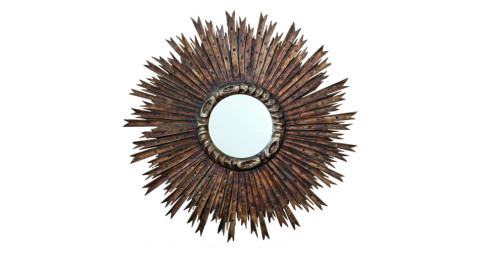 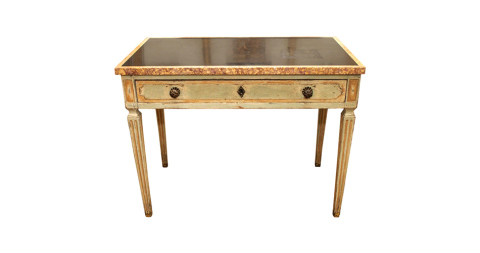 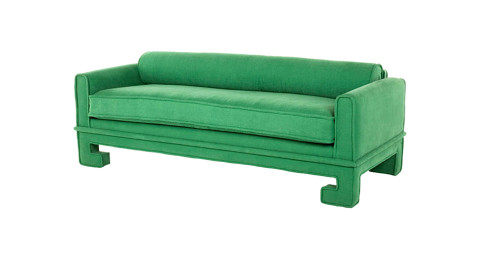 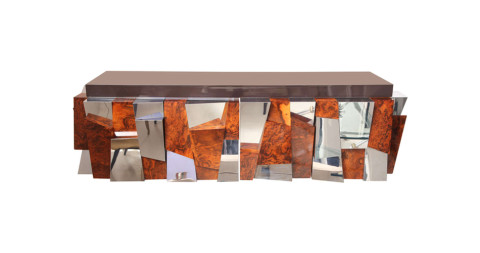 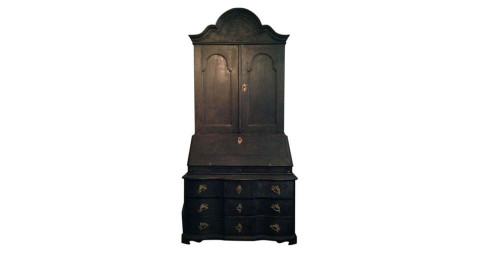