Greg Natale Has a Knack for Using Pattern 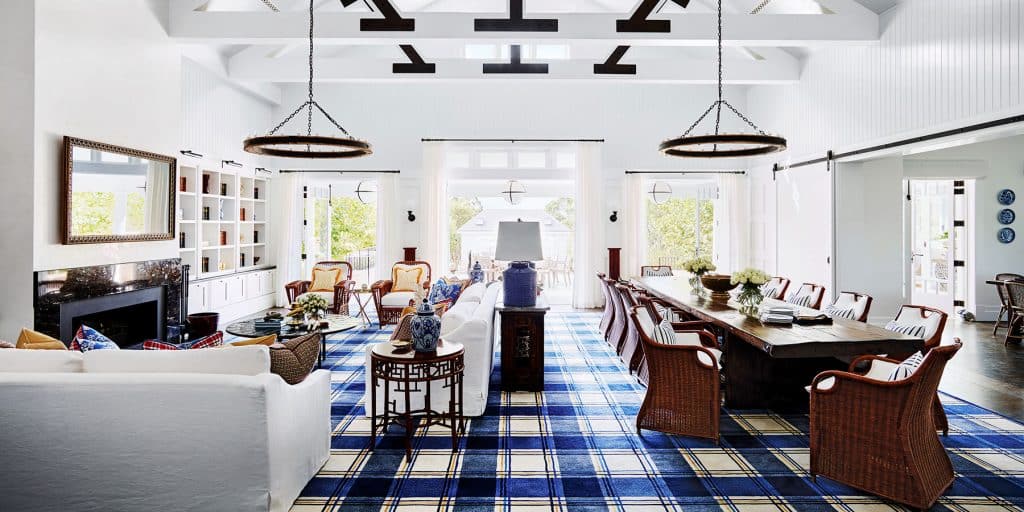 A new book highlights the Aussie designer’s passion for decorative motifs, from plaid to floral and everything in between.

I was blown away by the sets of Dynasty,” recalls Australian interior designer Greg Natale. “By Alex’s office and apartment and the Carrington house. They were so grand and dramatic.” Born in 1974 to Italian immigrant parents, Natale grew up in the Sydney suburbs watching American soaps with his four older sisters. Is it any wonder he knew he wanted to be an interior designer from an early age? (Another formative influence: Stanley Kubrick’s 2001: A Space Odyssey. “The shot of the French-style room with the illuminated floor is still etched in my mind.”) At 15, Natale tried to get rid of a sofa he didn’t like in his parents’ house by placing an ad in the local paper. He spent one whole summer tearing down wallpaper in a sitting room and repainting the space bright pink.

In his recently released monograph, The Patterned Interior (Rizzoli), the designer traces his love of bold motifs to that family home. “In the Natale house, the pattern was on the floors,” he says during a long-distance call from Australia. “There was ceramic tile with different patterns in every room. It was in the bathrooms, it was in the kitchen, it was in the living rooms, it was on the balconies, it was in the bedrooms.” As he writes in the book’s excellent introduction, referring to the work of his eponymous firm, “Pattern is an essential part of everything we do. . . . I’m sure there’s a patterned molecule hiding somewhere inside of me.” 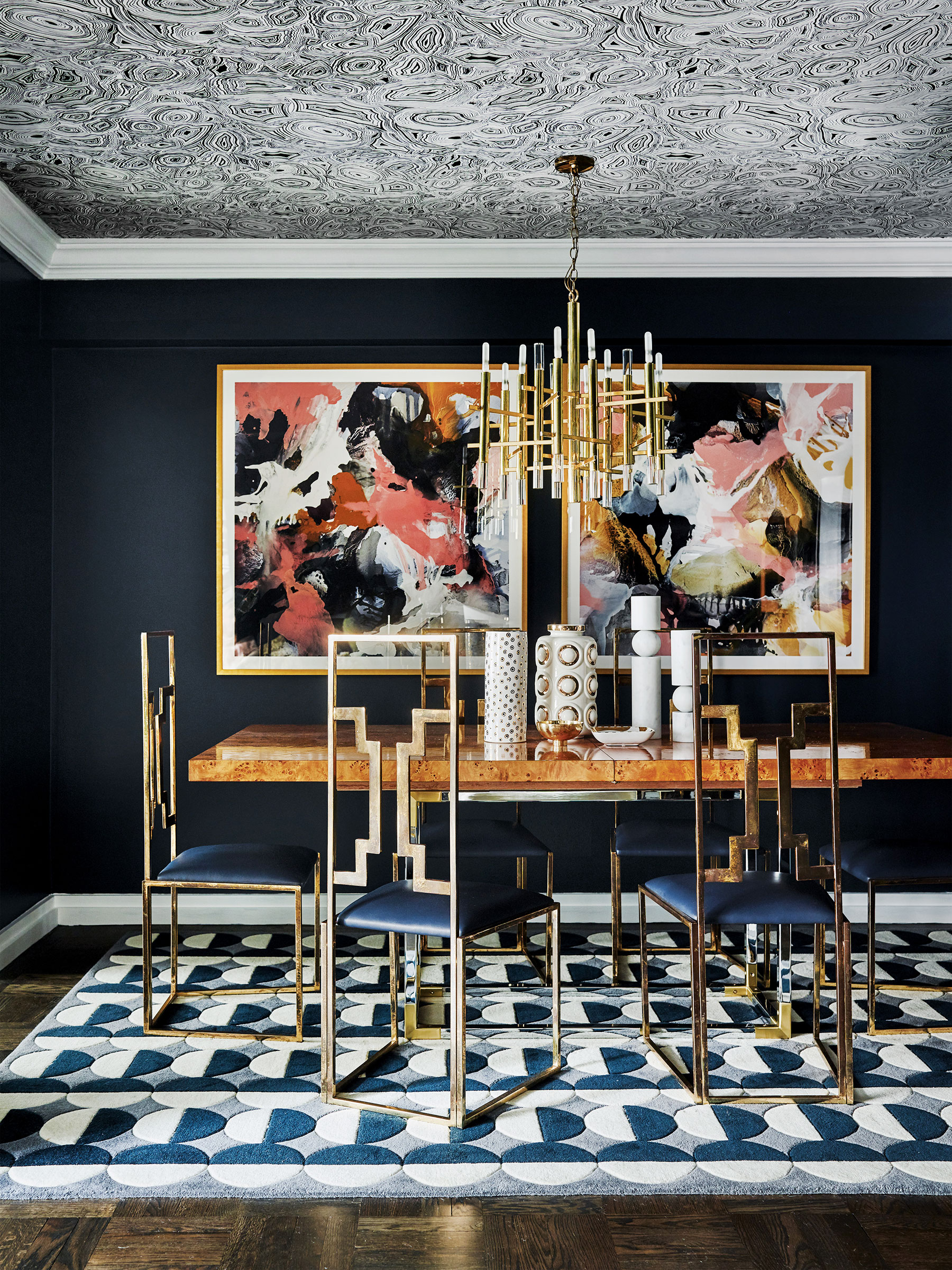 In this dining room of a New York apartment, a Gaetano Sciolari chandelier hangs over a table surrounded by vintage brass chairs. The paintings are by Scott Petrie, and the London rug is by Natale.

The 12 projects presented in the book illustrate his point. They range from a New York apartment, where Natale used a malachite-patterned wallpaper on one ceiling, to a sprawling estate in New South Wales, where he installed a massive blue-plaid rug in the main living room. Also in the mix are a rustic property in Oklahoma with Navajo-inspired textiles and his own two-bedroom flat overlooking Sydney Harbour Bridge, where he covered the walls with a gold-and-white marbleized paper. The mostly black Barwon River House, in Victoria, Australia, meanwhile, was largely inspired by a moody bachelor pad Natale created for himself some 15 years ago. A particularly arresting photo of the estate in the book shows a long hallway in which the chain-link motif on the ceiling echoes that of the custom rug underfoot. “There’s something so luxurious, cocooning and transporting about a space where the ceiling mirrors the floor,” he writes.

None of these projects, however, grace the book’s cover. Instead, Natale chose an image of a 3,750-square-foot duplex he created for a couple and their two children on Sydney’s ultra-fashionable Tamarama Beach, featuring a hand-painted de Gournay wallpaper depicting a luxuriant scene of birds and flowers. With more than a touch of glee, Natale recounts that the unit formerly belonged to the Australian minimalist designer Ian Moore. “He’ll probably fall over backwards when he sees what I’ve done to his apartment,” Natale says, chuckling. The rest of the decor incorporates numerous gold accents, as well as a banana-leaf paper in the master bedroom — a nod to the iconic maximalist restaurant in the Beverly Hills Hotel. 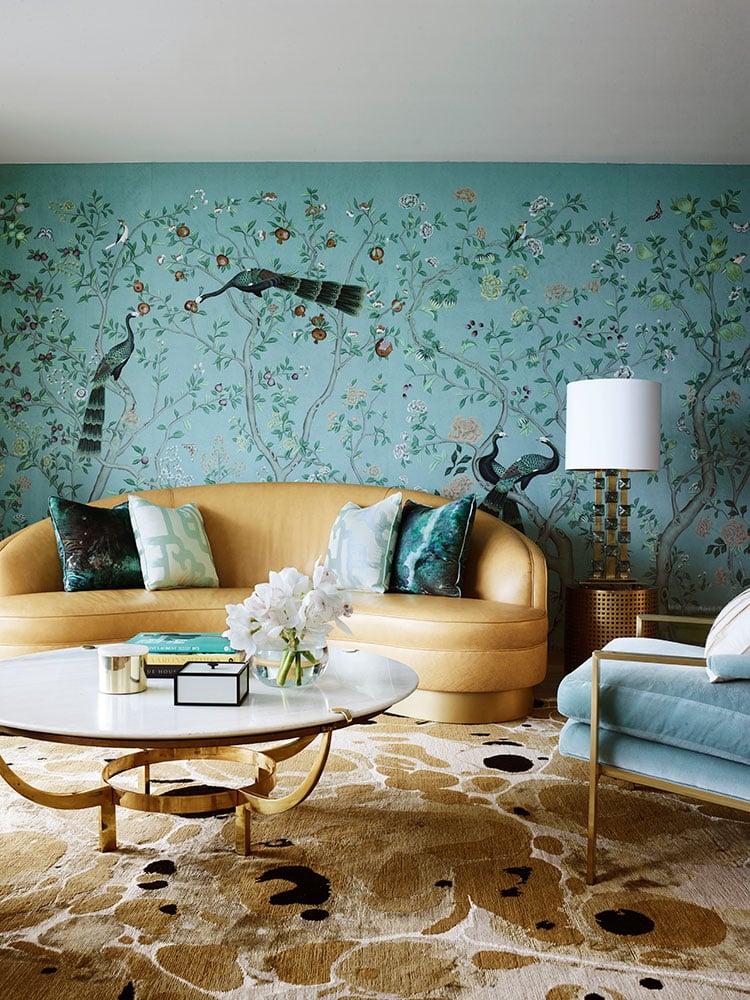 The living room of a Tamarama Beach penthouse is a “study in curves,” says Natale, starting with the gentle arc of the Dorothy Draper sofa, which is echoed in the round vintage coffee table and the organic pattern of the designer’s Ink rug. 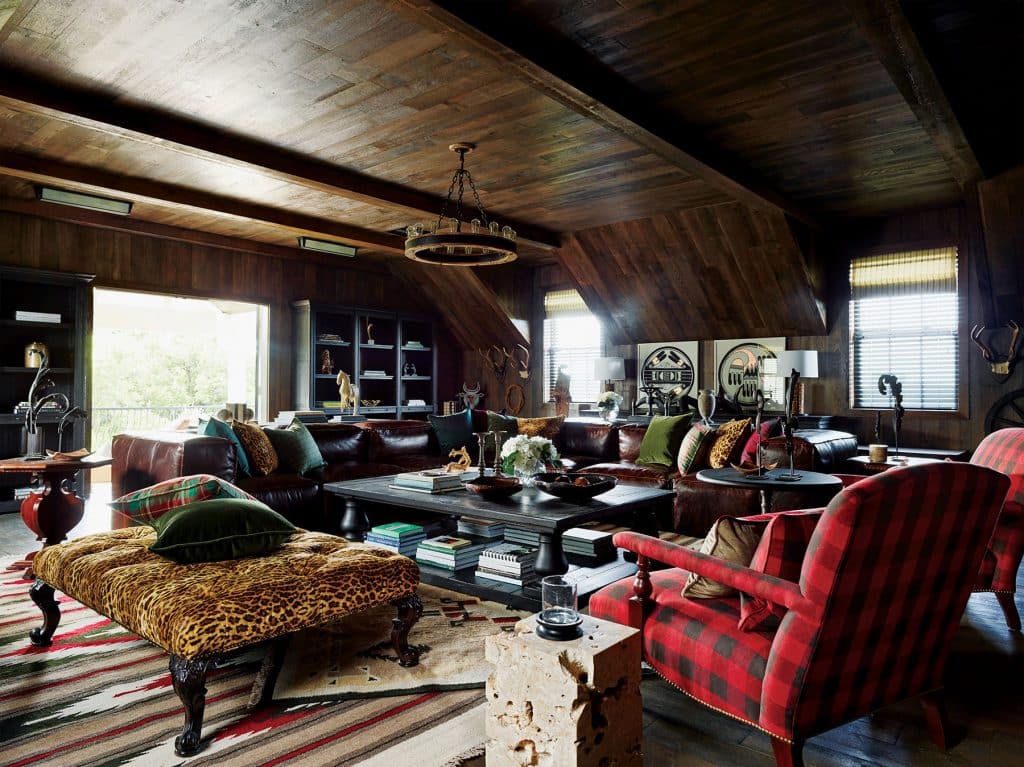 In this country house in Oklahoma, Natale added beams to highlight the barn-style roof and chose furniture upholstered in a mix of prints and patterns “to create a laid-back, cabin-like ambience.” 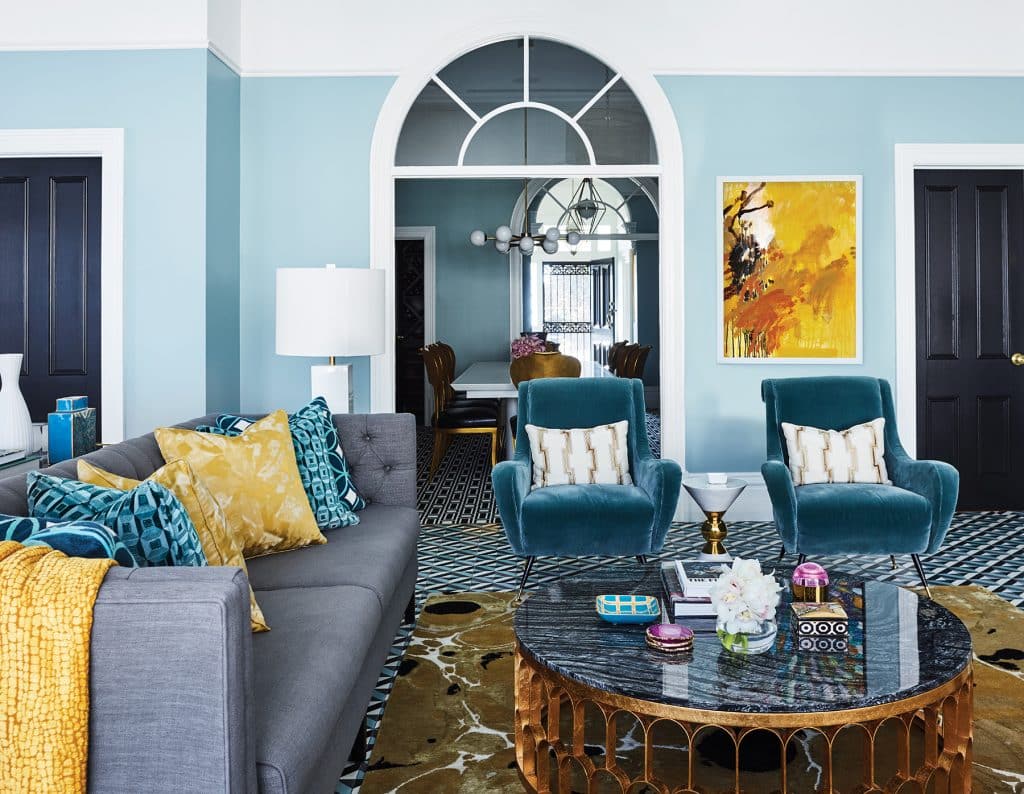 The warm hues of the Jo Davenport painting are reflected in the throw pillows and blanket in this Geelong, Australia, living room. 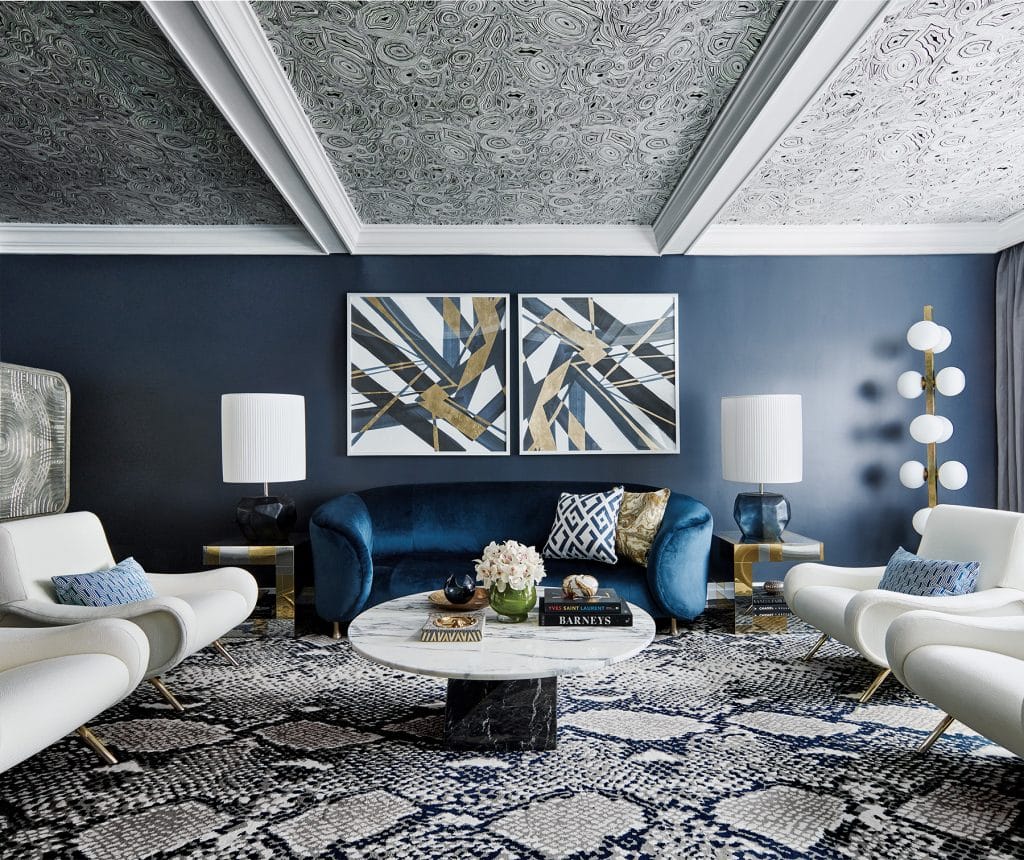 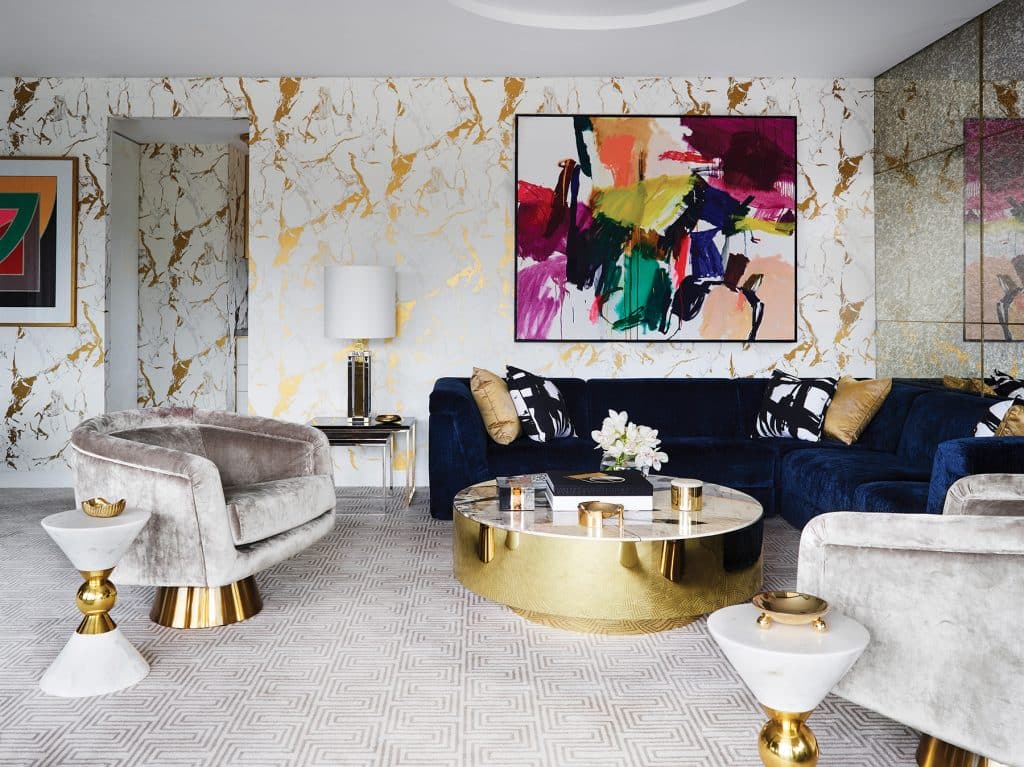 Natale writes that in the living room of his own Sydney apartment, gold marbled wallpaper “adds a glamorous organic touch,” while the navy-velvet-covered sofa was inspired by the abstract strokes of the Waldemar Kolbusz painting hanging above it.

Although the Tamarama Beach home is supposed to serve as a surf pad for the clients, it is hardly the kind of laid-back environment that invites you to shimmy in with sand-covered feet. But Natale is the first to admit that he doesn’t do casual. “I suppose it’s just who I am,” he explains. “It’s more the glamour thing that I like.”

“Greg definitely has a more formal approach,” says Tanya Buchanan, editor in chief of Sydney-based shelter magazine Belle. “His work is brave and edgy. He’s opened the door for more color and experimentation in interior design in Australia.” 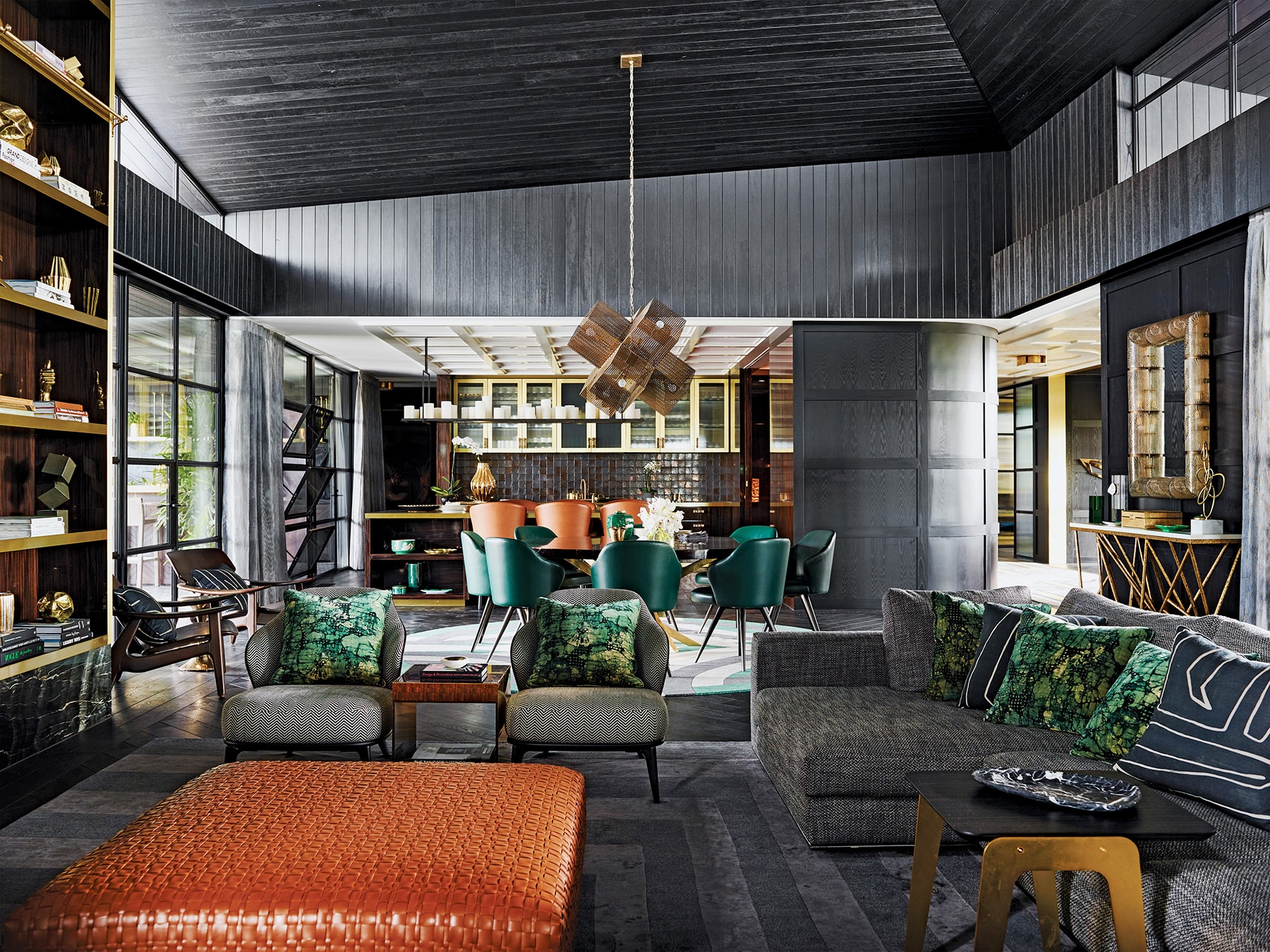 In the living and dining areas of this Victoria, Australia, country house, Natale added pops of green to provide “a tonal link to the outdoors,” he writes. “Against this, a range of grays, blacks and metallics complete the palette, with geometrics, grids, long lines and indulgent curves combining for a richly patterned mélange.”

The way Natale tells it, he made a very calculated choice to develop his trademark aesthetic. He studied extensively — three years of interior design at Sydney’s Design Centre Enmore, followed by visual arts at Sydney College of the Arts and then architecture at the city’s University of Technology —  and hit the job market in 1996, when the Australian interiors world was dominated by minimalism. “Everything was white, everything looked the same,” he recalls. “It was very inspired by what was going on in London with John Pawson and David Chipperfield. When I started my own business, I thought, ‘If I do that too, I’m not going to stand out.’ ” Setting up his firm, in 2001, he decided to adopt a much more decorative approach. Natale’s first solo project was a one-bedroom apartment for his eldest sister, Sabrina. He created an overall look for the home by using a custom-colored print by legendary Australian designer Florence Broadhurst for the wallpaper, blinds and bed linens. It was published by both Belle and Wallpaper* — and within no time at all, Natale’s phone was ringing off the hook. 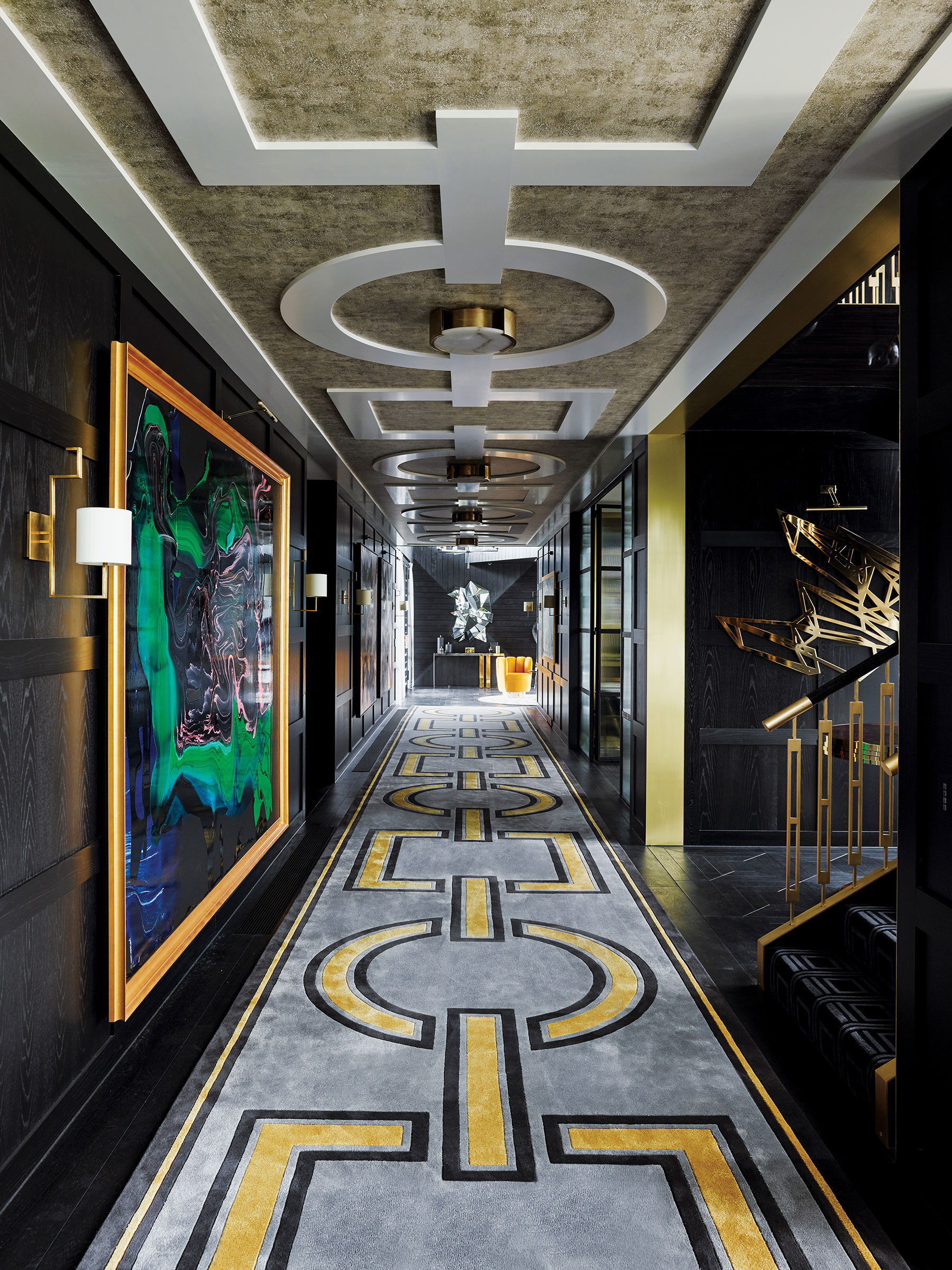 A rug of Natale’s design runs the length of the hallway in the Victoria house, its motif (a “super-sized version of a chain link pattern”) mirrored by the molded ceiling above.

Ask him about his aesthetic influences, and he’ll mention designers of the past like Giò Ponti, David Hicks and Verner Panton. One can also discern in his work echoes of both Kelly Wearstler and Jonathan Adler. For Natale, it’s important that his rooms have visual impact. He loves metals (especially brass and chrome) and combining black and white. “The contrast creates drama,” he states. He also adopts a very tailored approach to his interiors. “It’s like how I dress,” he explains. “Even if I buy something off the rack, I go straight to the tailor to have it altered.”

His first book was actually entitled The Tailored Interior and in both that and the current tome, Natale leads the reader through his design approach, proffering numerous tidbits of advice along the way. “A note about color,” he writes in his first book, “I never consider it a starting point and recommend you do the same. To start with a particular shade can be both inhibiting and intimidating, directing your choice too early in the process.” He also cautions against buying a patterned sofa: “The piece is so large that a bold pattern will dominate the room.” 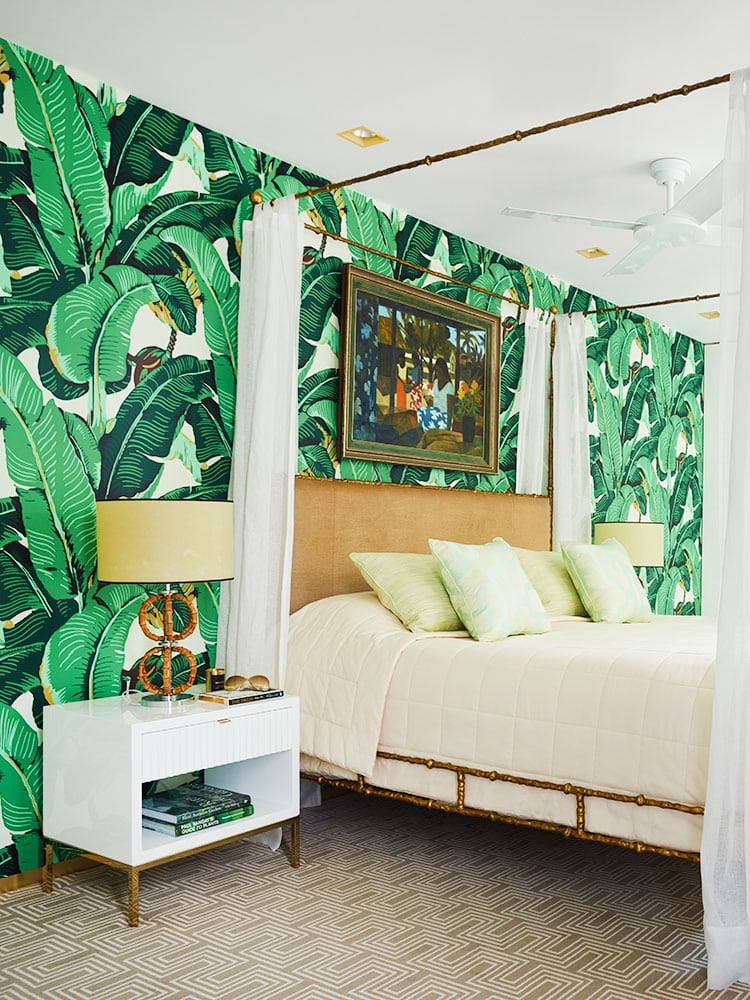 In the master bedroom of the Tamarama Beach penthouse, Natale used banana-leaf wallpaper as a nod to the iconic Beverly Hills Hotel restaurant.

In addition to his eye for design, Natale’s drive and commitment earn high marks from Belle’s Buchanan. “He’s very focused,” she says. “He could have been frivolous and bought himself a gorgeous house or something, but he has reinvested in his business.” Natale has also developed various licenses over the years, which include collaborations with the Australian firm Designer Rugs and the French furniture brand Grange. During the 2018 Salone del Mobile furniture fair, he unveiled a tile collection for Bisazza featuring motifs based on malachite, the Great Barrier Reef and moiré fabric. “He uses pattern in a very original fashion,” says the firm’s communication director, Rossella Bisazza, “and displays a taste for a luxury that is both discreet and very masculine.”

Natale recently launched his own accessories collection, comprising vases, bowls, boxes and trays in marble, brass, shell and ceramic. He’s looking to open his first store, in Sydney, next year. He has a few more long-term goals, too, prominent among them designing either a plane or boat. “They’re always quite glamorous, aren’t they?” he asks, rhetorically. “That would be the ultimate dream.” 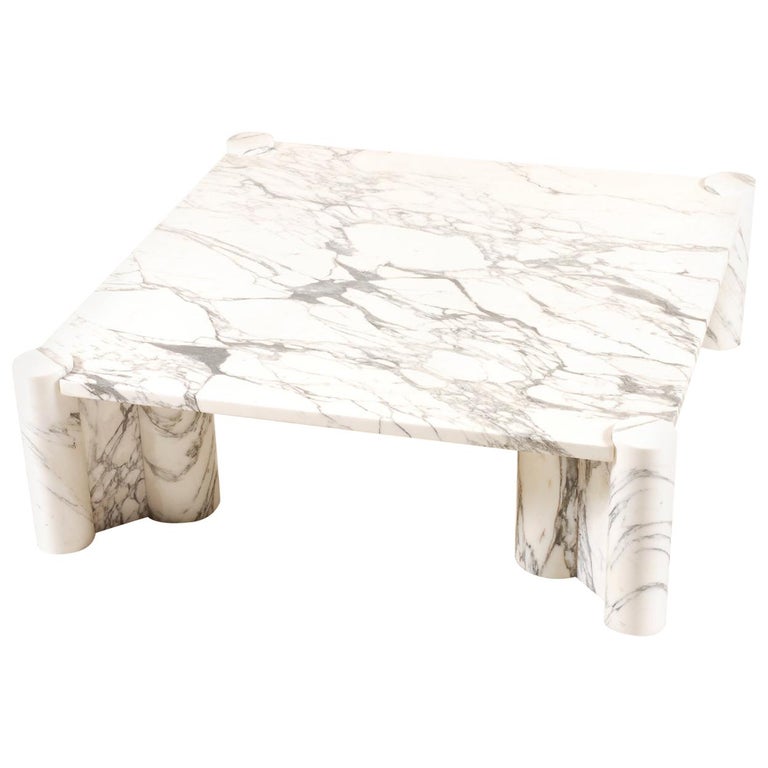 “This is a classic, and for me, the materiality is key. The form of the table is almost secondary to the beauty of that natural stone, but it’s still such a smart, elegant piece. I love its monolithic character. There is a softness in its robustness.” 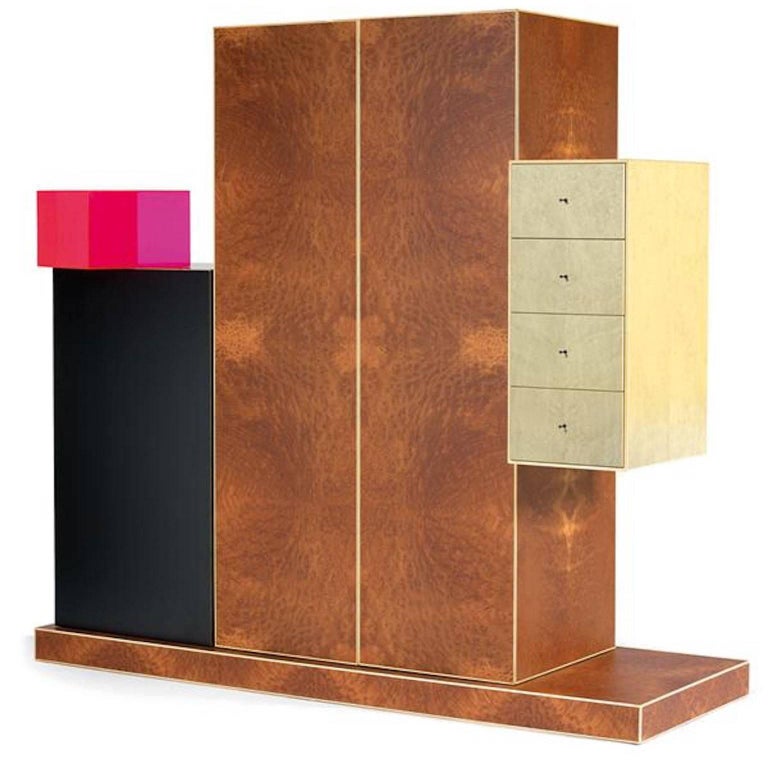 “This piece is so sculptural. It’s playful, yet it’s also very refined and functional. Sottsass was a genius.” 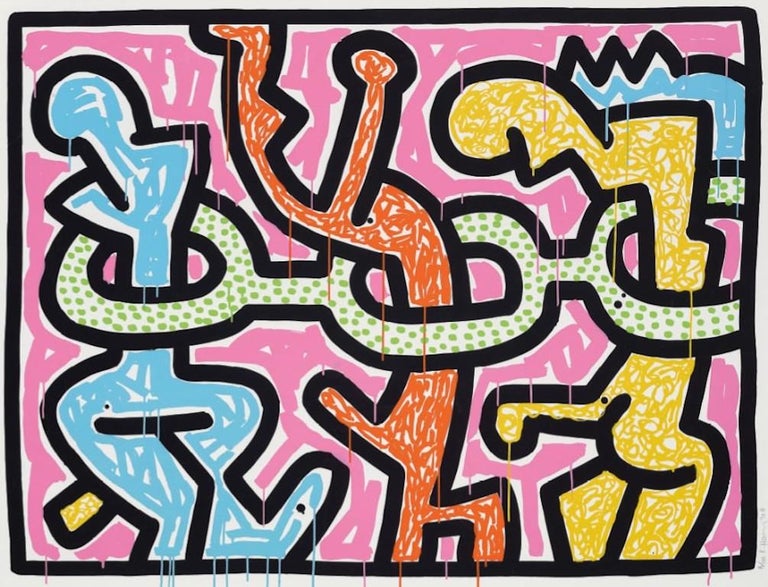 “I’m a big fan of Haring’s work. It has an energy and timelessness that keeps it relevant. Street art is as big as ever, practiced by the likes of Retna and Banksy and their contemporaries, and Haring was really the forefather of it all. I love to collect his pieces.”

“This piece is so sexy. I’m having a love affair with vintage glass at the moment, and the interlocking, sculptural aspects of this piece really break up all the metal we are using in our work. Pieces like this Murano chandelier are beautiful companions to the metallic gleam.” 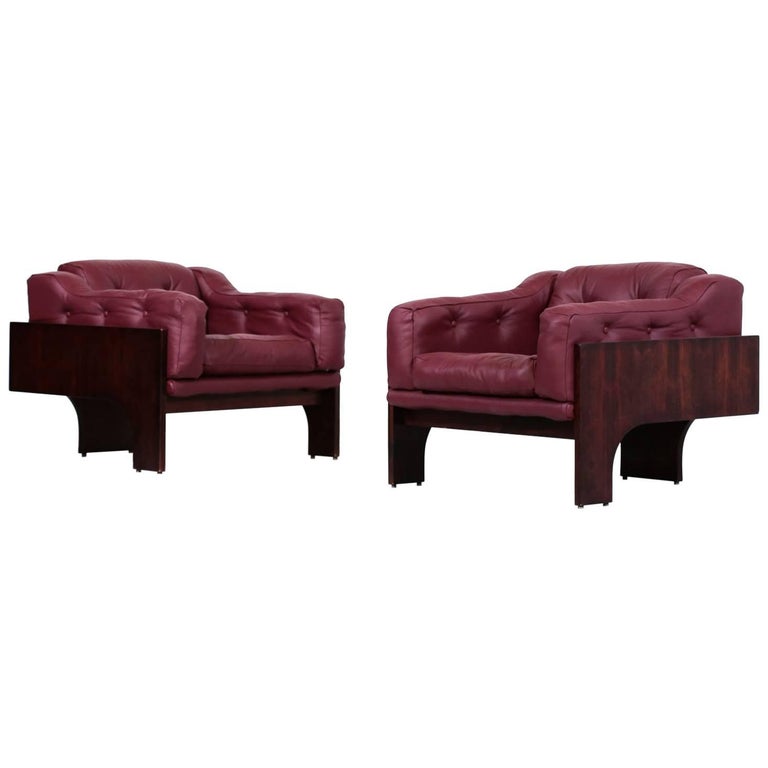 “I think the form of these chairs is so interesting. I am loving the combination of the burgundy and the rosewood. These are statement pieces that demand to be positioned in the middle of the room. They are beautiful from all sides and need to be appreciated in this way.”