Showhouse Tour: A Home for the Holidays 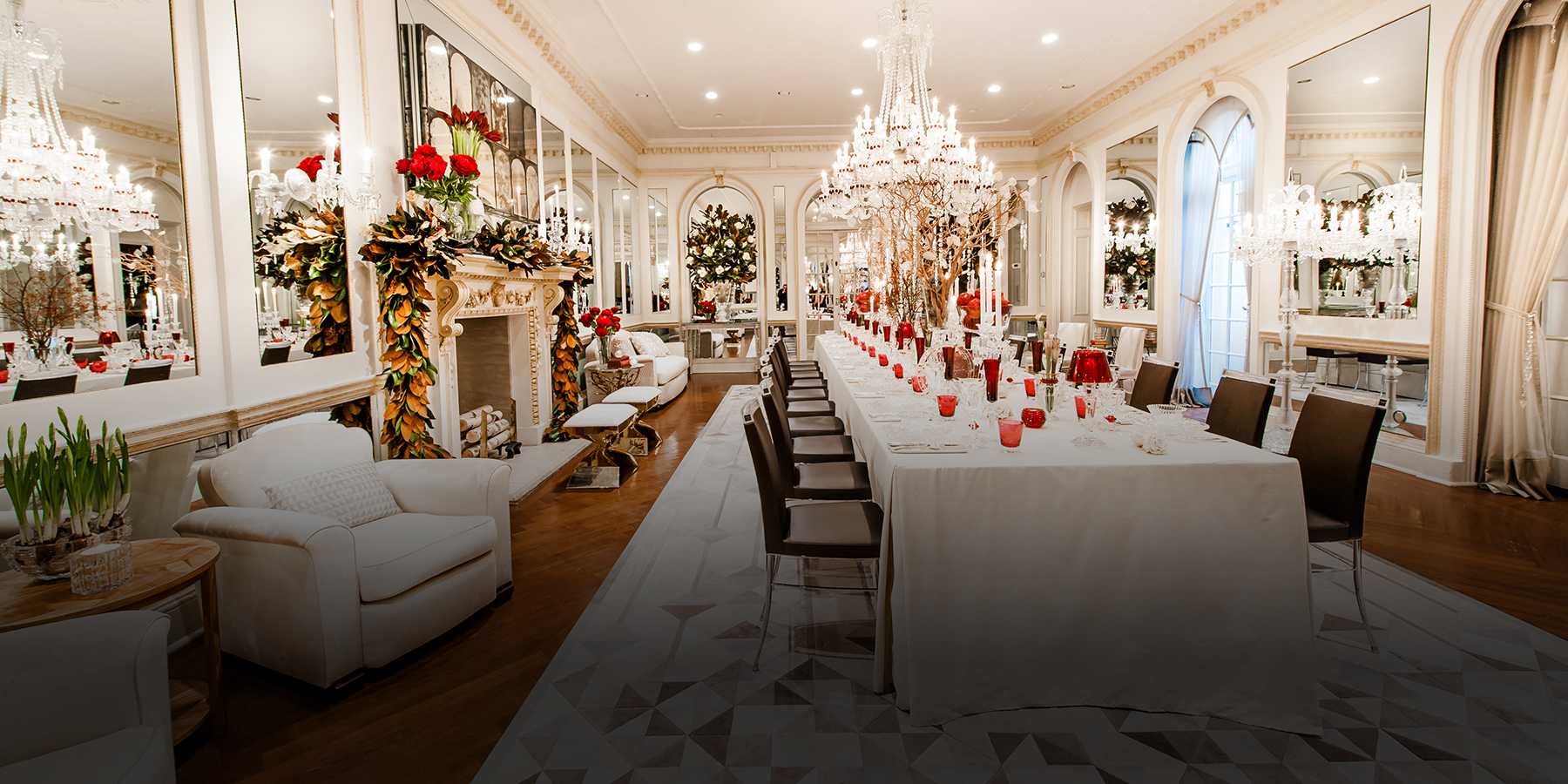 The season is off to a sparkling start at Holiday House, set in a grand mansion on New York's Upper East Side. With the help of 1stdibs dealers, 23 interior designers have let their imaginations run wild — to spectacular effect and to benefit the Breast Cancer Research Foundation. 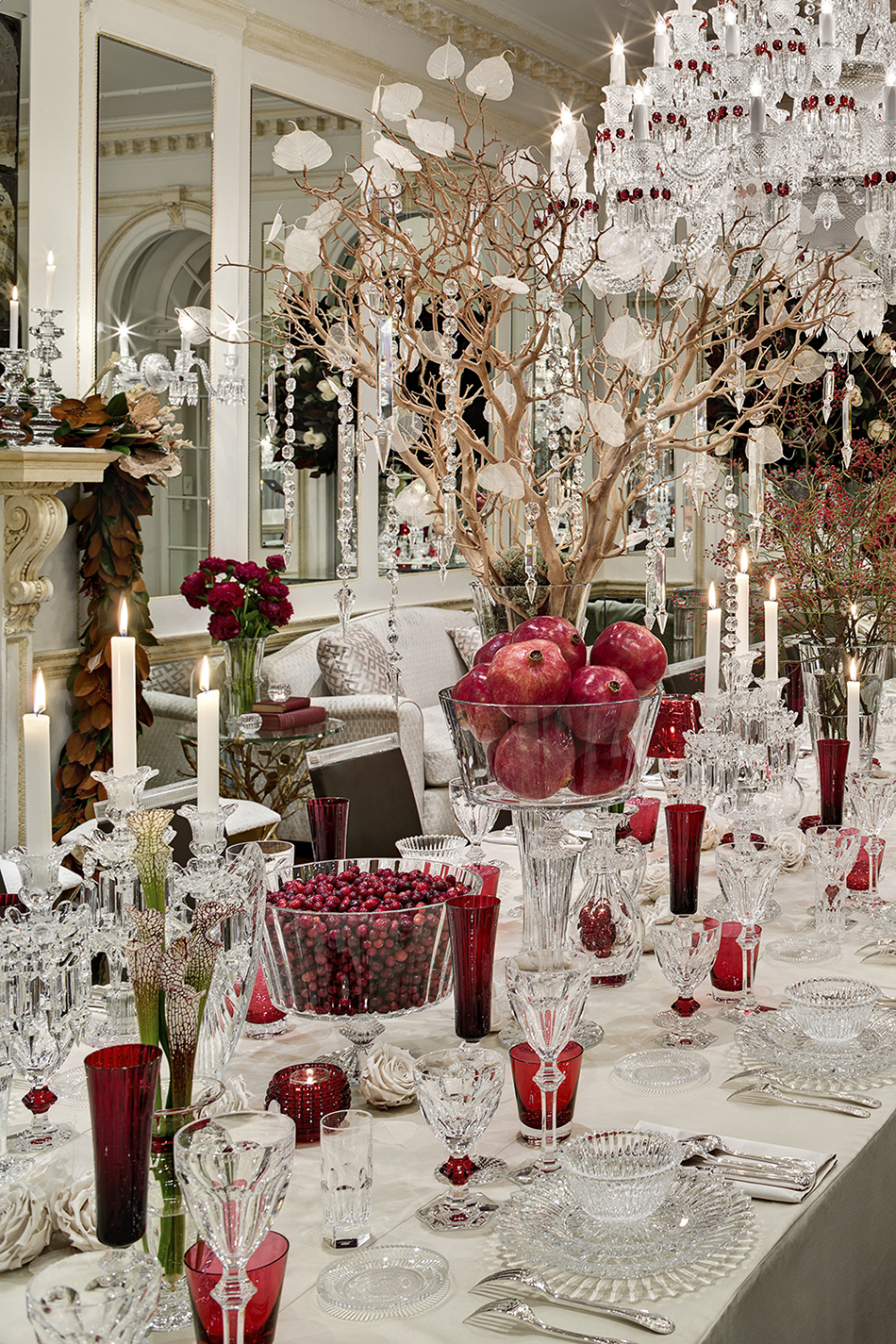 Gleam and glam, sparkle and splendor… there could be no more festive kickoff to the holiday season than a visit to Manhattan’s Holiday House, the month-long decorating extravaganza that benefits the Breast Cancer Research Foundation (BCRF) and is open to the public through December 21.

Masterminded for its seventh year by Iris Danker, herself an interior designer and breast cancer survivor, and sponsored in part by 1stdibs, Holiday House transforms the 75-foot-wide Academy Mansion, built in 1921, into a lavish showcase for the unfettered imaginations of 23 top designers, many of whom sourced furnishings, lighting and accessories from 1stdibs.com and the 1stdibs showroom at the New York Design Center.

“Galerie des Glaces,” Amy Lau’s dramatic treatment of the grandest of the mansion’s reception rooms (seen above), was inspired by nothing less than the Hall of Mirrors at Versailles. Baccarat, the artisanal French crystal company, which celebrates its 250th anniversary this year, partnered with Lau to provide a 20-place tabletop setting fit for Marie Antoinette, along with 20 crystal-trimmed dining chairs and a show-stopping 48-arm chandelier. (The Baccarat items will be sold by silent auction, with a percentage of proceeds going to the BCRF.) Looking for additional pieces that could hold their own against such sumptuousness, Lau turned to 1stdibs dealer Maison Gerard, which loaned Jules Leleu settees and armchairs, a pair of 1960s lacquered-wood slipper chairs by Jacques Quinet and Art Deco straw-marquetry side tables by Andre Groult, all reflected in mirrored panels Lau installed to line the walls and frame the room’s arched Palladian windows. 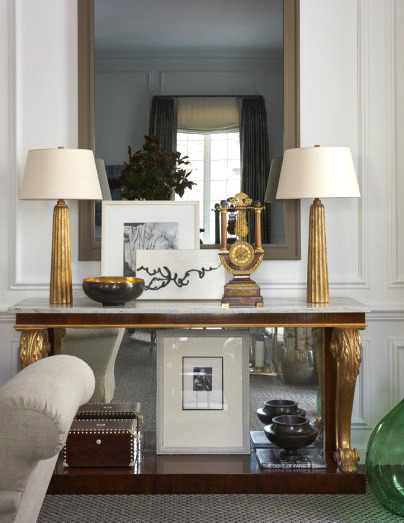 In the mansion’s wood-paneled former dining room, meanwhile, designer Ally Coulter envisioned “An American in Rome.” She explains: “This is how I’d want to live in Rome, with a mix of contemporary pieces and antiques — and a red Vespa.” The scooter is there, along with Old Master paintings; contemporary furnishings by American designers Ralph Lauren, Dakota Jackson and John Lyle; and finds from 1stdibs vendor Newel, including a pair of 19th-century Venetian grotto armchairs with carved-seashell backs and a pair of high-style 1960s Italian chrome table lamps.

Tall windows on two sides light up Matthew Patrick Smyth’s serene “25th Anniversary” sitting room, which celebrates 25 years of Traditional Home magazine and which he sees as “traditional but not stuffy, with roots in good classic design that still looks very ‘today.’ ” Smyth balanced a late-Regency scrolled-arm mahogany sofa from Lee Calicchio, a circa-1820 rosewood center table from Sutter Antiques and a pair of Regency marble-top console tables from Florian Papp with more recent works, including a 1940s French chandelier in brass, Lucite and glass from Lerebours Antiques and a contemporary abstract painting from Fred Giampietro — all found on 1stdibs. “I don’t know how I’d do business without it,” Smyth says. “These days, clients want things fast. I’m on 1stdibs at six in the morning and ten at night.” 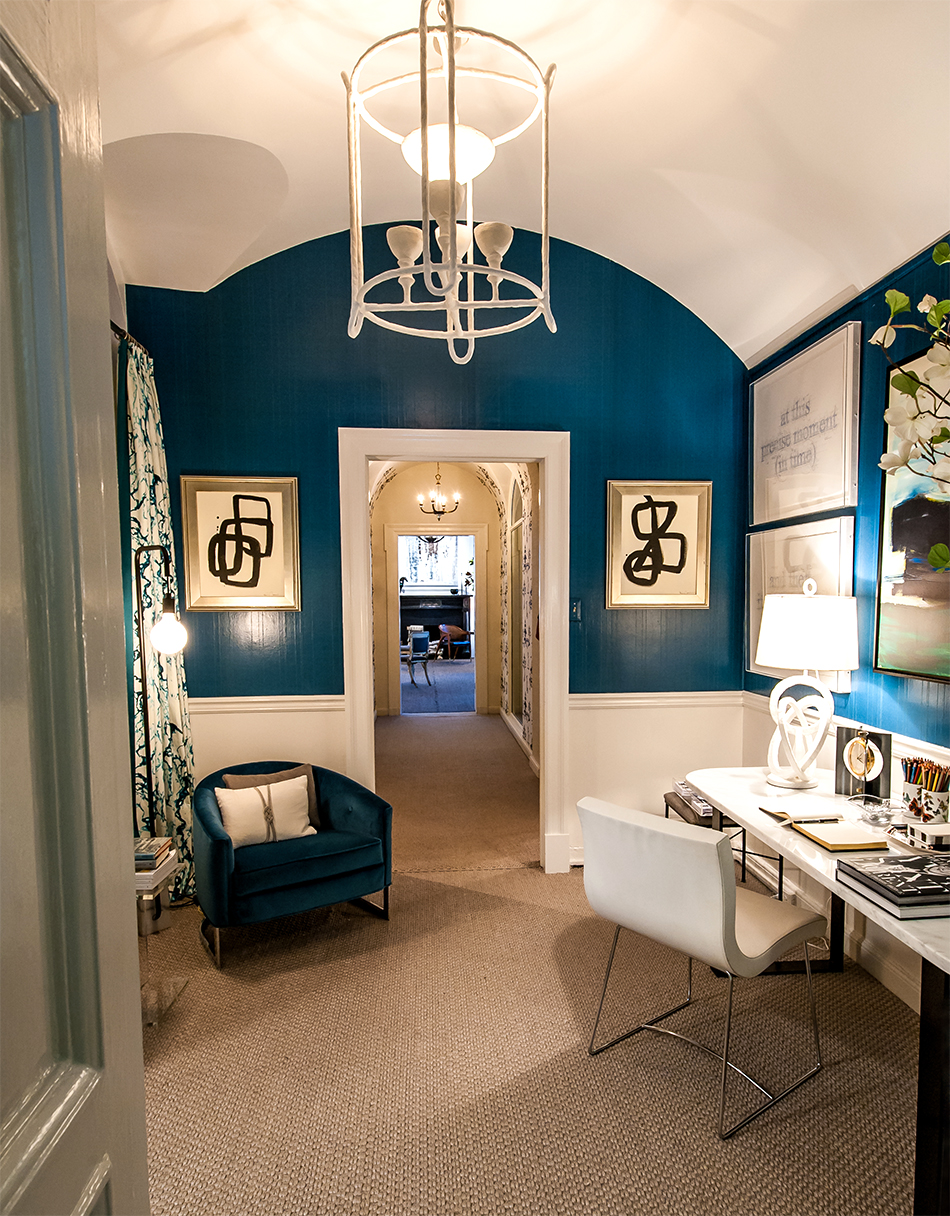 The Mediterranean palette of Rachel Laxer’s “Midsummer Holiday” study mixes with furniture, art and objects meant to evoke the 1970s style of Halston, Warhol and Studio 54.

While many of the rooms at Holiday House have an urban winter-wonderland feel, Boston-based designer Gary McBournie took a different tack. “Caribbean Island Holiday” is a lively tropical retreat whose walls are tented with summery striped fabric. Bamboo étagères from S. Julian, a mid-20th-century teak console from Horseman Antiques and a pair of neoclassical torchère lamps from David Duncan Antiques complete the scene.

Joan Dineen of Dineen Architecture + Design named her inviting ivory guestroom “On Holiday with Friends.” She says that “practically everything came from 1stdibs. It’s our go-to.” There’s a contemporary oak multifaceted side table by Italian designer Achille Salvagni from Maison Gerard and several pieces, including 1950s chiseled-crystal Fontana Arte wall sconces and a round wall mirror framed with chipped chunks of glass by the Italian Ghiro Studio, from longtime 1stdibs dealer Donzella. Dineen lauds both galleries for “not just mining the past for great design, but recognizing that it continues, and supporting it.”

“Midsummer Holiday,” a teal-and-white fantasy boudoir by designer Rachel Laxer, was inspired by the chic ’70s style of Halston and Warhol. The designer envisions it as a “refuge for an elegant, strong woman” — hence the vintage photos of Jackie O. Among the many 1stdibs finds in the room are 1970s Milo Baughman barrel-back chairs upholstered in plush velvet from new vendor Reeves Antiques. “I get up early to hunt 1stdibs’s Saturday sales,” Laxer says. “I’m online when the new postings go up at eight A.M.”