Why ‘Holiday’ Is the Best Travel Magazine That Ever Was 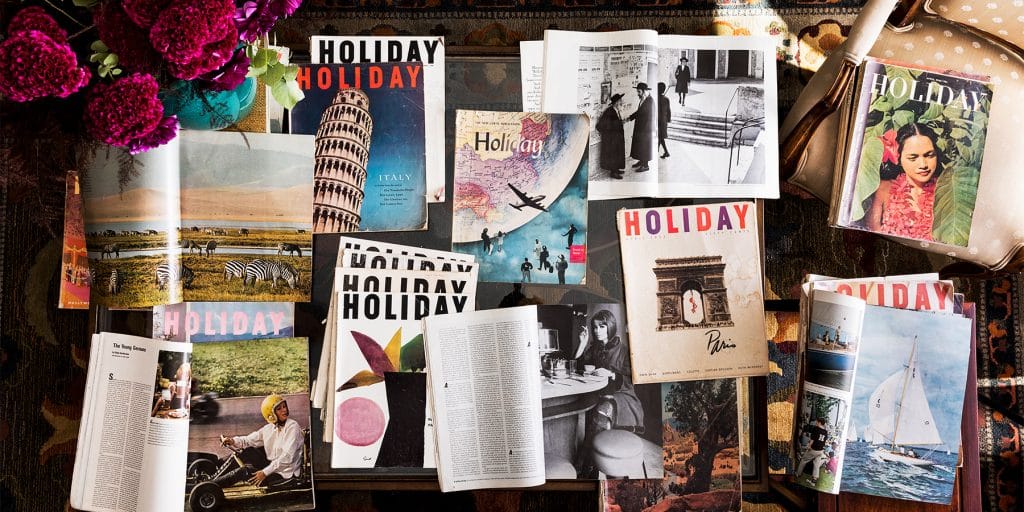 In print from 1946 through 1977 — and recently relaunched — the periodical has published works by such modern masters of prose and photography as E.B. White and Joan Didion, Slim Aarons and Henri Cartier-Bresson. 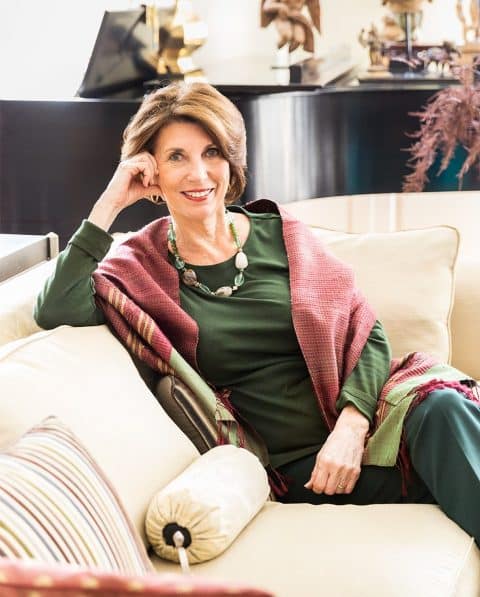 November 10, 2019Longtime editor in chief of Travel + Leisure and Town & Country Pamela Fiori, photographed here in her Manhattan apartment, has just released a new book that celebrates Holiday, the magazine where she began her career. Top: An array of covers and spreads from Fiori’s home archive of Holiday issues. Styled by Sarah Cave; hair and makeup by the John Barrett Salon

Pamela Fiori knows how to travel. And where. And with whom. Over the course of her five-decade career in publishing, she served as the longtime editor in chief of Travel + Leisure and Town & Country, even creating the latter’s travel-focused spinoff. Along the way, she transported readers around the world from the comfort of their living rooms, and she inspired them to get up and out of those living rooms to go explore the world themselves — always in style, and usually tucking torn-out magazine pages, with articles she’d assigned or even written, into their suitcases.

But before her time at T+L and T&C, there was Holiday, the magazine where Fiori started her career in 1968, as a fact checker, following a four-month stay in Florence, Italy and eventually to other parts of Europe. That Continental journey gave her the travel bug, but it was working at Holiday that ensured she’d never be rid of it. The periodical, she writes in the introduction to her new book, Holiday: The Best Travel Magazine That Ever Was (Rizzoli), took “readers on journeys that lifted their spirits and engaged their curiosities.” 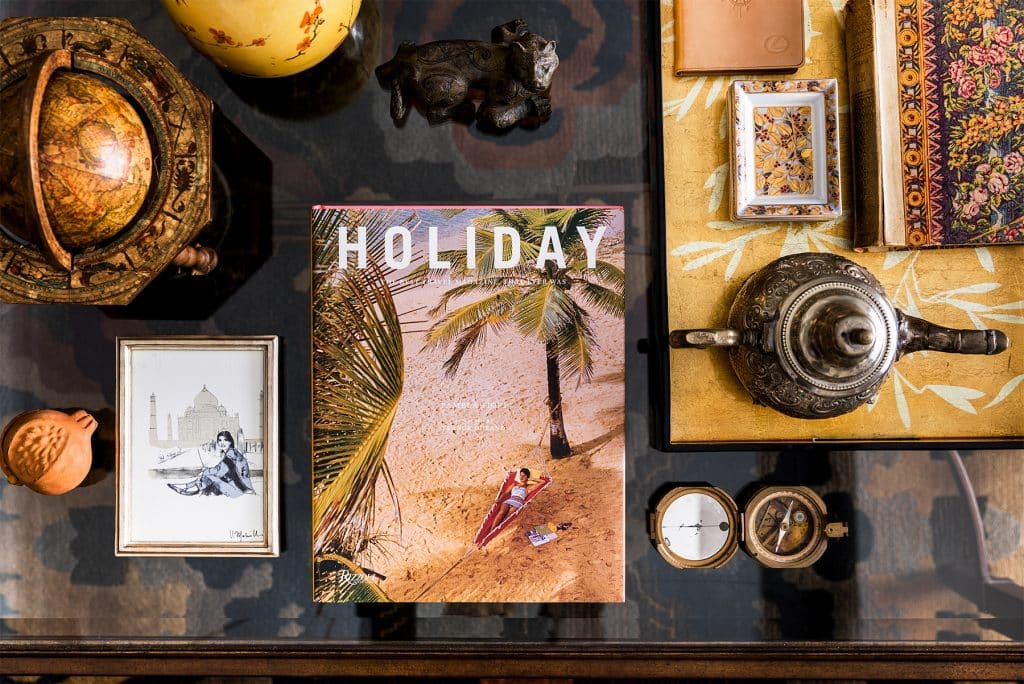 The book, Holiday: The Best Travel Magazine That Ever Was (Rizzoli), is surrounded by momentos from Fiori’s life and travels, including a drawing of her at the Taj Mahal by Victoria Molinelli; a compass from the 1940s belonging to her husband, Colt Givner; a vintage Indian teapot given to her by the photographer Oberto Gili; and an antique globe.

Launched in 1946, Holiday was arguably the country’s first travel magazine, but having no obvious direct competition didn’t mean it was lazy about its editorial. To the contrary, its editors commissioned work from the greatest literary lions and award-winning photographers and illustrators of the day. Its pages presented deep dives into lands both far-flung and close to home, with a focus on telling compelling, transporting stories not just about places but about people, too — often including the stunning houses they called home.

The new book features scores of the best, most captivating articles and images from Holiday’s 30-year run, as well as an afterword by Paris-based graphic designer Franck Durand, who relaunched the magazine in 2014 and whose atelier oversaw creative direction of this volume.

Fiori recently spoke to Introspective about the book and what puts Holiday in a class of its own. 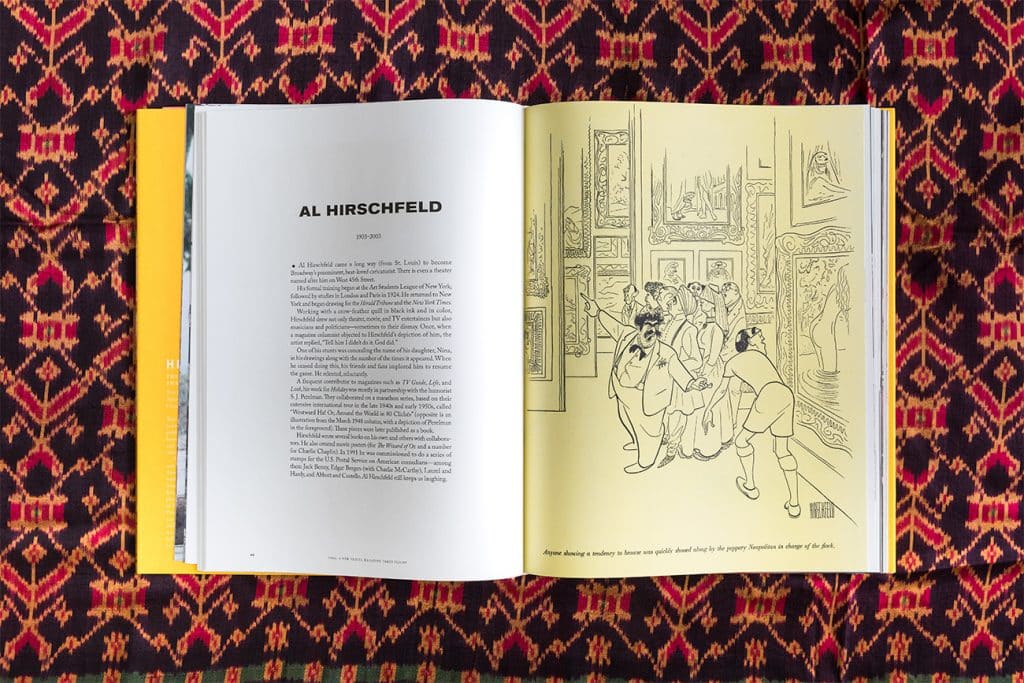 Among the top talents who contributed to Holiday was caricaturist Al Hirschfeld. Most of his work for the magazine, Fiori writes, was done with humorist S. J. Perelman. “They collaborated on a marathon series, based on their extensive international tour in the late 1940s and early 1950s, called ‘Westward Ha! Or, Around the World in 80 Clichés.’ ” The illustration here is from their March 1948 column.

We’ll begin with the big question: What is it that made — and still makes — Holiday the best travel magazine ever?

Apart from its being the first of its kind, Holiday was literary, artistic and photojournalistic. All its contributors were held to a high standard and were given the space to tell a comprehensive story.

There was nothing similar before in magazine form, unless you consider National Geographic, which was and is more anthropological. Today’s travel magazines do not the have the size, breadth or depth. And I should know: I edited one of them — Travel & Leisure — for many years. 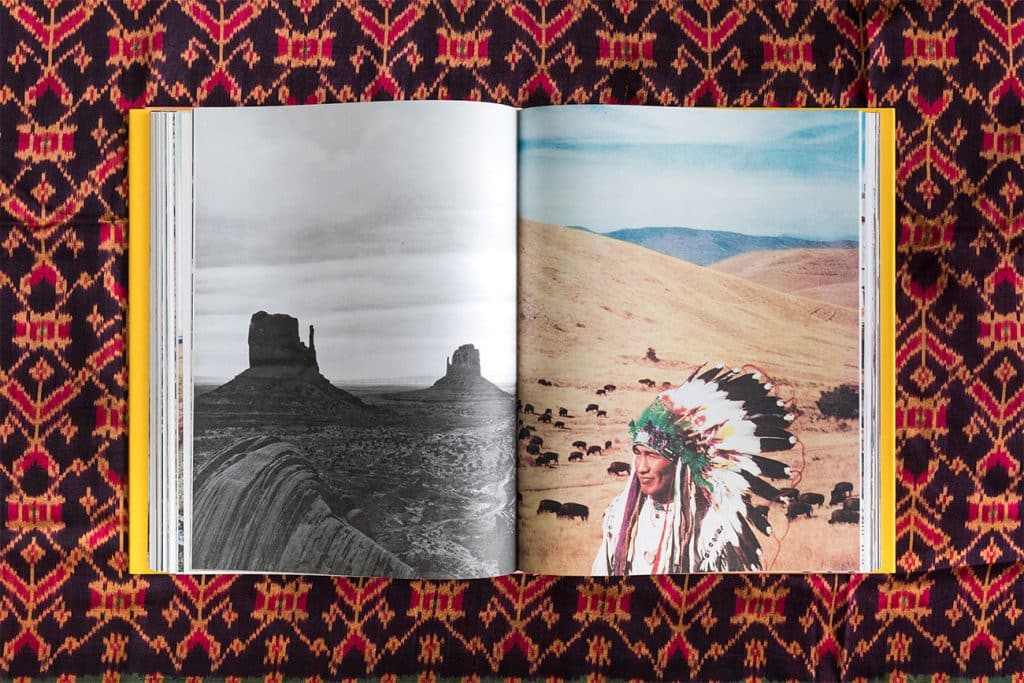 Holiday’s purview spanned the globe, to be sure, but the magazine also covered and depicted domestic destinations, as exemplified by this spread from the book. At left is a photo of Utah’s Monument Valley by an unknown artist, which ran in Holiday in January 1953; at right is a portrait by Arnold Newman of Patrick Adams, a member of the Native American Flatheads tribe, from the February 1956 issue.

Let’s start with one of the earliest: E.B. White’s magnificent essay “Here is New York,” published in the late nineteen forties. Then there is Budd Schulberg’s pungent take on Hollywood; Joan Didion on Sacramento, where she grew up; Laurens van der Post on Russia and Japan; Kenneth Tynan on Havana; the list literally goes on and on. 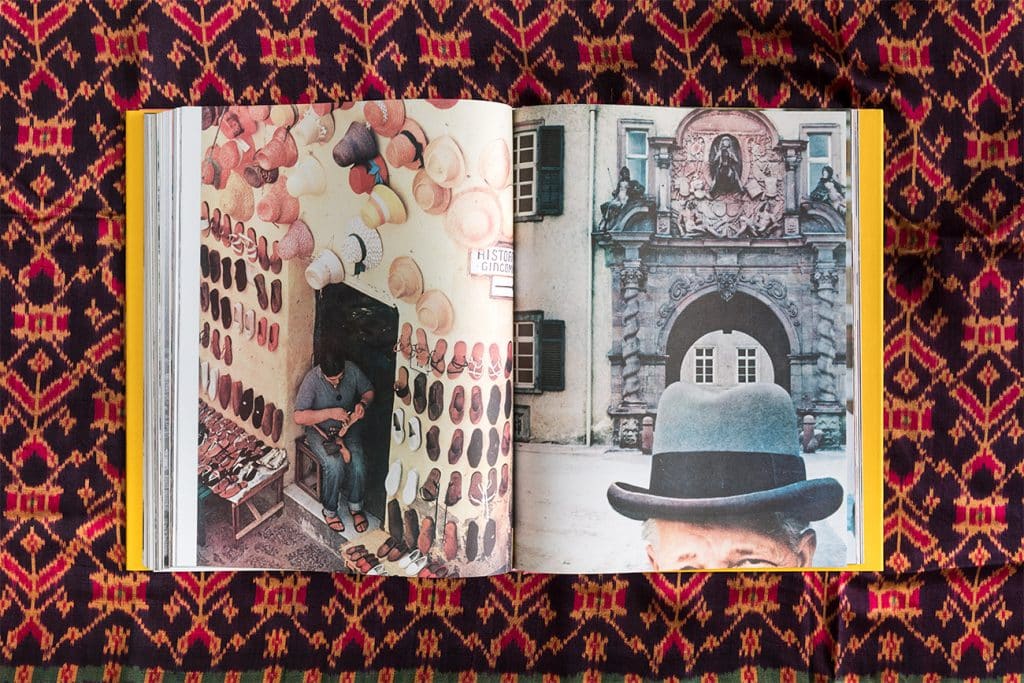 Burt Glinn photographed a shoemaker in Positano, on Italy’s Amalfi Coast, for the June 1962 issue of the magazine, while Elliott Erwitt shot in Bad Homburg, Germany, for that year’s January issue.

Holiday wasn’t just about beautiful places, of course, but also about the beautiful people doing beautiful things in those places, and the book is full of boldfaced names. Was that part of the editorial mission of the magazine? 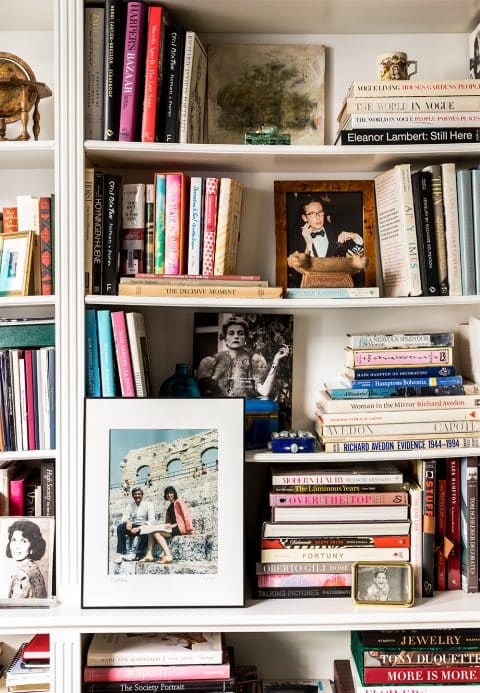 Perched amid books on fashion, jewelry, design, art, photography and more is a photo from a mid-1980s trip to Verona, in northern Italy, showing Fiori and Givner in the city’s ancient Roman amphitheater.

The line “Attractive people doing attractive things in attractive places” is attributed to photographer Slim Aarons [a regular Holiday contributor], whose post–World War Two career was all about luxury, and he adhered to that prescription like no one else. So, yes, that aspect was part of the vision — beautiful people, beautiful places. But it wasn’t the only part. Holiday editor Ted Patrick and his successors were intent on truth telling, on well-rounded narratives about destinations, including many of the world’s most complicated and challenging places, so that they were not whitewashed in any way.

1stdibs readers will be particularly intrigued and inspired by the depictions of fabulous houses, interiors and gardens in the magazine. Which stand out for you?

Almost any of Slim’s photos fit that bill. But even more memorable to me are the images by such greats as Robert Capa, Henri Cartier-Bresson, Elliott Erwitt, Arnold Newman and Burt Glinn. Credit for the design of Holiday goes directly and properly to Frank Zachary, its brilliant art director. 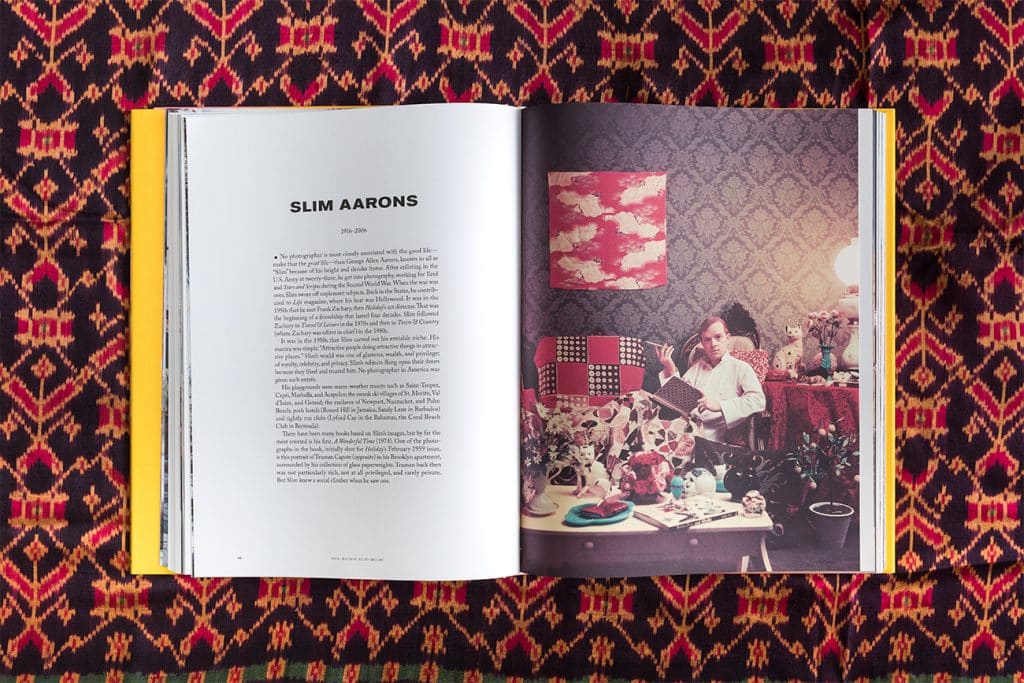 Slim Aarons shot this portrait of Truman Capote in Capote’s Brooklyn apartment with his collection of glass paperweights for Holiday’s February 1959 issue. “Truman back then,” Fiori writes, “was not particularly rich, not at all privileged, and rarely private. But Slim knew a social climber when he saw one.”

Beyond photographers, the magazine also often enlisted artists and graphic designers to create its covers and illustrations. Can you tell us a bit about the most notable of these collaborations?

One of my favorite illustrators was George Giusti, whose covers were like Abstract Expressionist paintings. Ludwig Bemelmans was another — he both wrote and drew for the magazine. Likewise, Ronald Searle and John Rombola. Perhaps the most antic collaboration was that of caricaturist Al Hirschfeld with humorist S.J. Perelman. Patrick sent them on a round-the-world trip titled “Westward Ha!” which was one of Holiday‘s most famous and hilarious series. 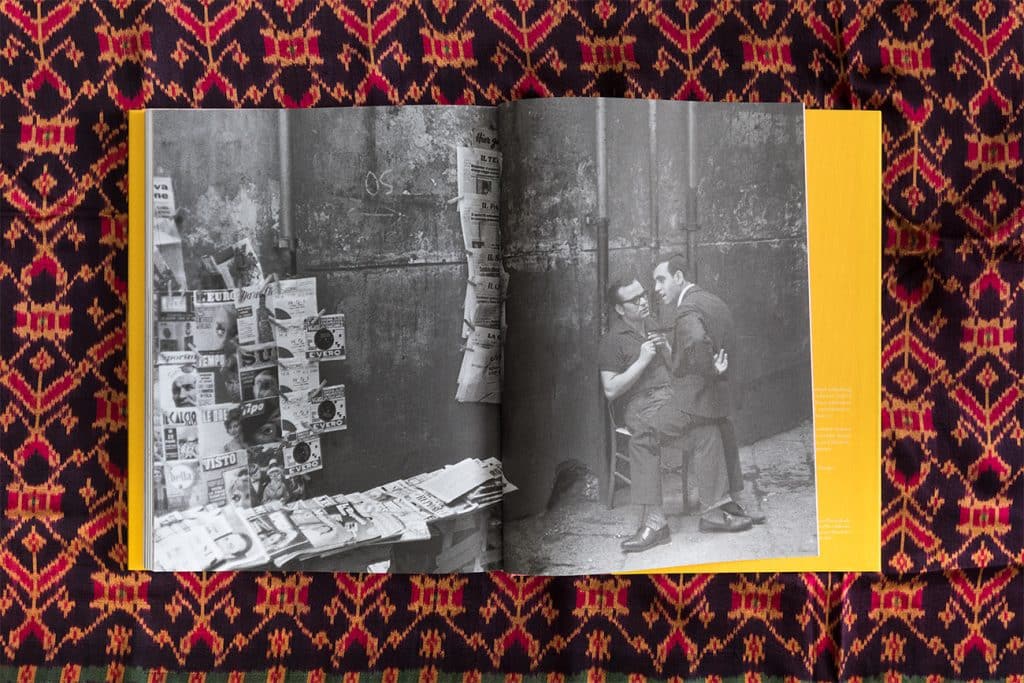 This image by Henri Cartier-Bresson — who is cited by Fiori as “[t]he twentieth-century photographer to whom all others genuflected” —  was shot in Naples, Italy, and ran in the January 1961 issue. “His way of capturing ordinary people and situations gave them depth and permanence,” Fiori writes. “His images are unflinching and unforgettable.” 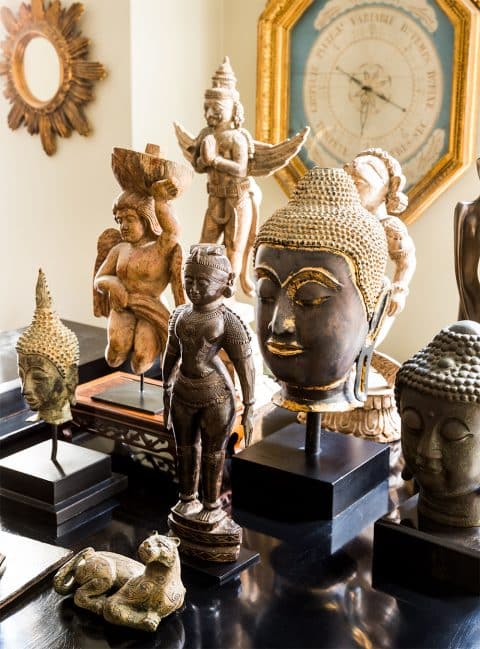 On the piano are arrayed antique Buddhas and other sculptures, mostly made by artisans in Thailand, India, Indonesia and elsewhere in Asia.

Was there anywhere the magazine didn’t — or wouldn’t or couldn’t — go?

Interestingly, there is only one photo of wildlife in East Africa. I suppose that’s because photo safaris had not come into fashion in the nineteen fifties and hunting was still allowed. There is little on Central America, nothing on Patagonia, Antarctica or the Galapagos, and not nearly enough about West Africa.

From your own travels, do you have favorite furnishings or decor finds that you brought back with you? Or design ideas you incorporated in your own homes?

The strongest influences were my trips to Africa, India and Asia. After a safari in South Africa, I completely redid our bedroom in our weekend house to resemble a lodge. My husband said, “Do me a favor. Don’t go on any more trips to exotic places.” Fat chance.

Where did your wanderlust come from?
From the movies, especially The Wizard of Oz. The moment I saw it as a young child, I wanted to follow the Yellow Brick Road — and in many ways, I did, sans the witch and the menacing monkeys.

Travel, it seems, has changed your life, and in a variety of ways. How do you think it can change the lives of others? In other words, how do you think about the power of travel?

There’s not a doubt in my mind that travel — as opposed to tourism — can be life changing. The expression “Travel is its own reward” couldn’t be more true. It is the ultimate escapism and the best, most uplifting education on earth. Unless you are on a business trip, with limited time and exposure, and if you are open-minded, each trip you take will send you back home with perceptions that will alter your outlook forever.

But don’t take it from me. Get out there and see for yourself. 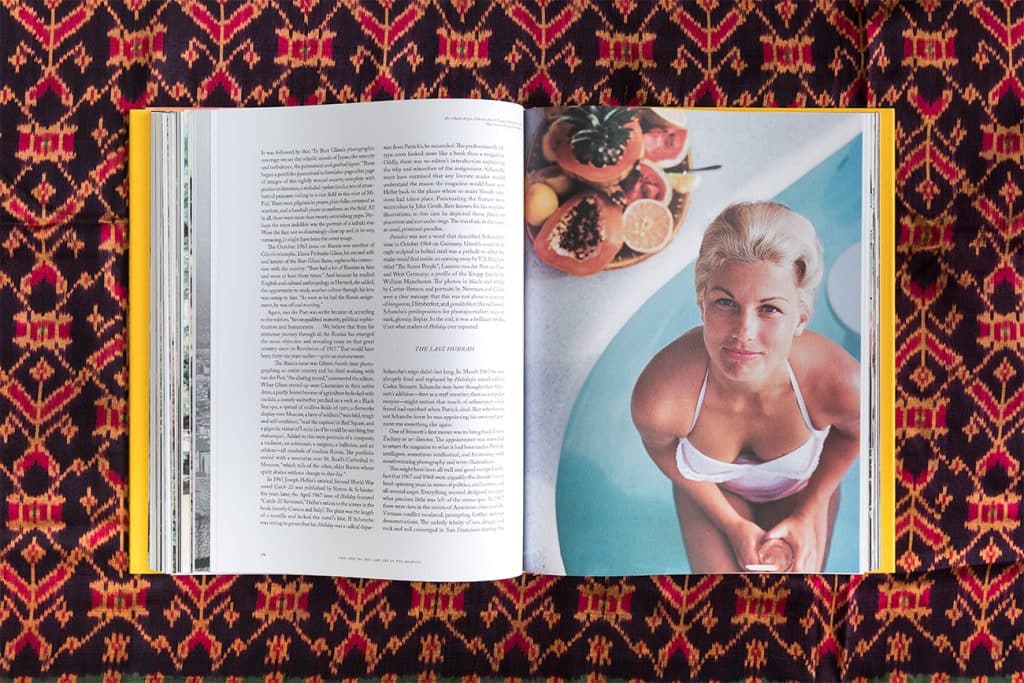 Aaron’s “mantra was simple,” Fiori writes. “Attractive people doing attractive things in attractive places.” He turned his lens on many of them for Holiday, producing such indelible, transporting images as this one, of Mrs. Charles Rogers at the Villa Vera Spa & Racquet Club in Acapulco, Mexico, which ran in the magazine’s November 1961 issue.

What do you hope readers will take away from the book?
Inspiration, stimulation and an appreciation of truly great writing, evocative photography and glorious illustrations. 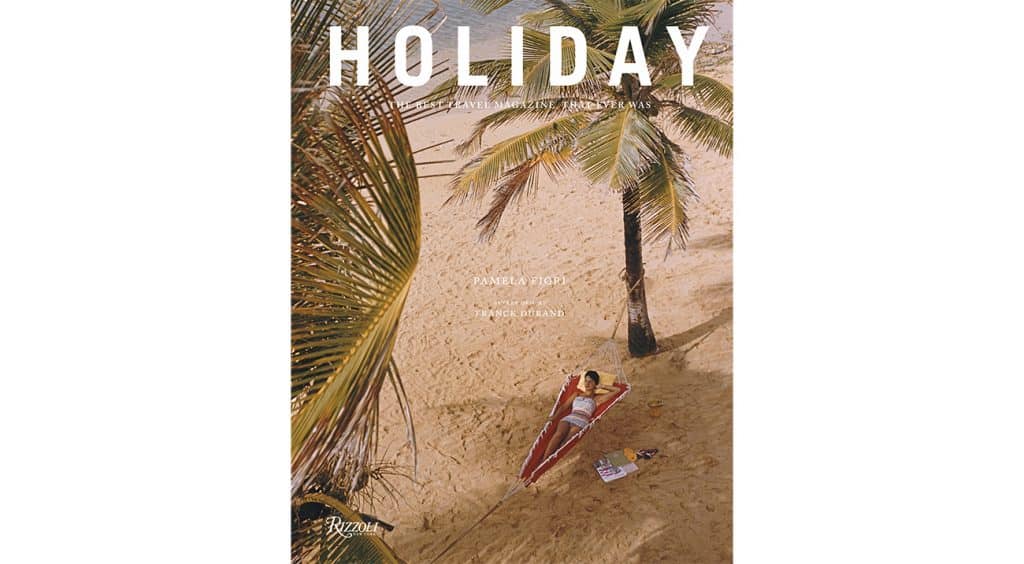 Or support your local bookstore.