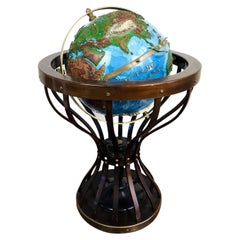 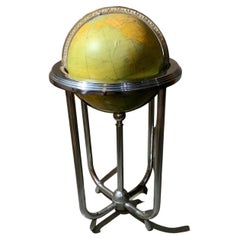 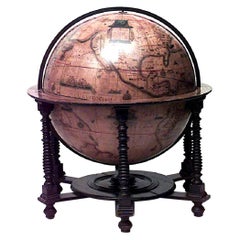 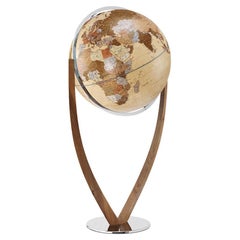 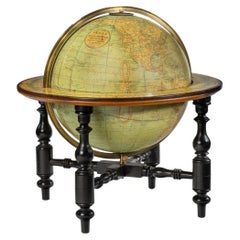 Huge Vintage Illuminated Globe with Brass Stand
Located in Berlin, DE
Wonderful and rare illuminated globe with a brass stand. The globe is rotating and adjustable in high.
Category

Terrestrial Globe French 18th Century, Swinging Structure
By G. A. Rizzi-zannoni
Located in Milan, IT
Designed, created, and built to be hanged to the ceiling in order to spin and play with it. Rare are the cases of pre-revolutionary French globes, and most of all the swinging ones. ...
Category

Globe, Late 20th Century
Located in Roma, IT
Terrestrial globe, realized in the late 20th century in plastic to imitate hard stones, with the golden metal axis and black resin base. In very good condition  This object is shipp...
Category

Antique Terrestrial Globe Walnut Base Published in 1950 by Vallardi Pubblisher
By Vallardi
Located in Milan, IT
Terrestrial globe published in the 1950s by Vallardi publisher, drawn and engraved by A. Minelli, papier-mâché sphere covered with paper printed by engraving on copper plate and wate...
Category

Antique Terrestrial Globe Walnut Base Published in 1950 by Vallardi Pubblisher

Pair of Louis Philippe Table Globes by Charles Dien, Paris
Located in Essex, MA
One terrestrial and the other celestial. With bronze chapter ring. Ebonized wood bases. Signed by maker and dated 1844.
Category

Large and Extremely Rare Terrestrial Globe by Newton
By Newton Globes - Planer & Newton
Located in Lymington, Hampshire
A large and extremely rare 24-inch terrestrial globe by Newton Our most magnificent and rare globes were a pair of 24-inch Newton globes. These too were updated in 1852 (terre...
Category

Large Terrestrial and Celestial Globe with Astrological Signs, Circa 1970

A Large-Sized Italian Heavily Foxed Velum Covered Globe on Wood Stand, 19th C.
Located in Atlanta, GA
An Italian 19th century large globe on wooden stand. This velum covered globe is heavily foxed and has nice age to it which makes only the countries on the lower half of the globe vi...
Category

French Art Deco World Globe Light
Located in Chillerton, Isle of Wight
A French Art Deco 10” world globe light The globe is in fair condition with a little surface scratching, it has a stepped painted metal base and stands 16” high, the diameter of t...
Category

Hand Painted Zodiac Floor Globe
Located in Stamford, CT
Hand painted Zodiac floor globe with turned wooden base. Please note of wear consistent with age including minor wear and cracks to the wood and minor paint loss to the globe itself.
Category

Tellus Globe
By David Linley
Located in London, GB
This striking piece features a 50cm diameter globe elevated on a dark charcoal veneered stand with caps, brace detailing and a highly polished base in nickel. The globe rests on thre...
Category

1920s Library or Classroom Terrestrial World Globe with a Cast Iron Base
Located in New York, NY
Terrestrial globe from the late 1920s. The metal globe is set on a decorative cast iron base, and was likely used in a classroom or library setting. This can be seen at our 2420 Broa...
Category

Rare Pair of Table Globes by Cary, Each Dated 1816
By John & William Cary
Located in Lymington, Hampshire
A rare pair of 9 inch table globes by Cary, each dated 1816. These globes are by John and William Cary and show the geographical and political borders drawn up following the Congress...
Category

Rare Pair of Table Globes by Cary, Each Dated 1816

Italian Globe with Astrological Signs
Located in Douglas Manor, NY
2-310 Italian globe with astrological signs is a reproduction of a globe originally made in Italy in 1507.
Category

Celestial Globe Signed Smith, London, 1820
By Smith & Son
Located in Milan, IT
A celestial globe. Over a tripod-shaped foot that rises with a central element with moved profile, is connected to the brass meridian, which holds at the ends of the globe. The base ...
Category

American Victorian Brass Meridian Globe
Located in New York, NY
American Victorian (circa 1880) globe of the world with a brass meridian and raised on a turned wood pedestal and round base (BAKER, PRATT & CO)
Category

Antique and vintage globes can prove unique and interesting accents to your living space, whether on their own as provocative conversation pieces or part of a small collection dotting the shelves where your sculptures and other decorative objects live.

Globes are among the most ancient of scientific instruments. During the Age of Exploration, they were vital for navigation, bringing sailors home after perilous journeys on different trade routes. Globes didn’t just detail continental formations, they might also show astronomical positions — adventurous seafarers of the day would rely on stars’ positions in traveling the great waters ahead of them. Antique globes offer a glimpse into specific time periods and how peoples of the past navigated the world around them. These were tools that identified a region’s borders, the names of countries, territories and more as the Earth’s geography was once known or imagined. As information about a place became available to geographers over time, globes became more accurate.

Not all globes depict the Earth and its countries, landmasses and bodies of water. The models that do are known as terrestrial globes, while globes that detail the position of the stars and other heavenly bodies are called celestial globes.

Quite surprisingly, the construction of globes remains relatively unchanged from the 16th century. The base starts as two papier-mâché hemispheres, which have a wooden support pillar attached via the north and south poles. The hemispheres are joined with glue or sewn with string and are subsequently topped with more paper or even thin fabric. Lastly, the globe is covered with plaster, ready for the design to be pasted on top.

Perhaps even more surprising is that the decorative function of globes has not changed much since the 16th century. They’ve been given as gifts for hundreds of years, as globes have always been beautiful objects whether they’re in your home office or your living room, lining your mantel alongside other globes of different sizes. Recent globe designs offer modern variations in style and features, such as interior lighting, automatic rotation and more.

Today, vintage trunks and luggage have reappeared as furniture or decorative home accents in a bedroom or foyer. This likely owes to wanderlust, nostalgia and a shared love of good design. Decorating with globes is similarly rooted in the allure of travel and a penchant for the stylish finishing touch that collectibles bring to our homes. Antique globes add welcome doses of color and contrast to a house or apartment’s neutral corners, their sea blues and algae greens popping against reclaimed wood interiors or stone fireplaces.

On 1stDibs, you can find a collection of authentic antique and vintage globes including mid-century modern, Georgian, Art Deco editions and more.