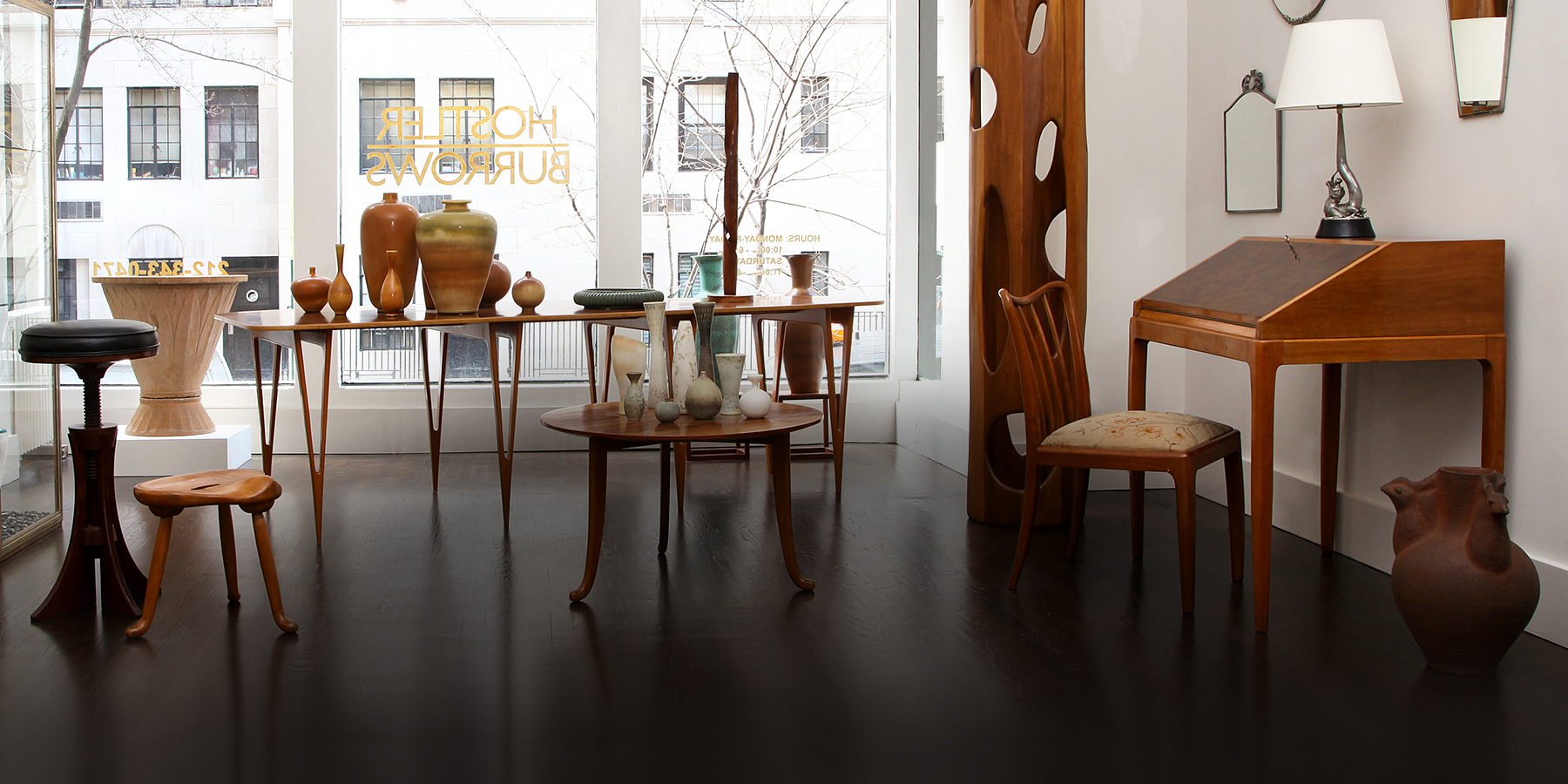 The dealer-couple behind renowned New York gallery Hostler Burrows — celebrated for its emphasis on lesser-known, early-20th-century Scandinavian design and a stunning collection of ceramics — has relocated from Tribeca to a light-filled space on East 10th Street, amid a burgeoning row of antiques dealers south of Union Square. 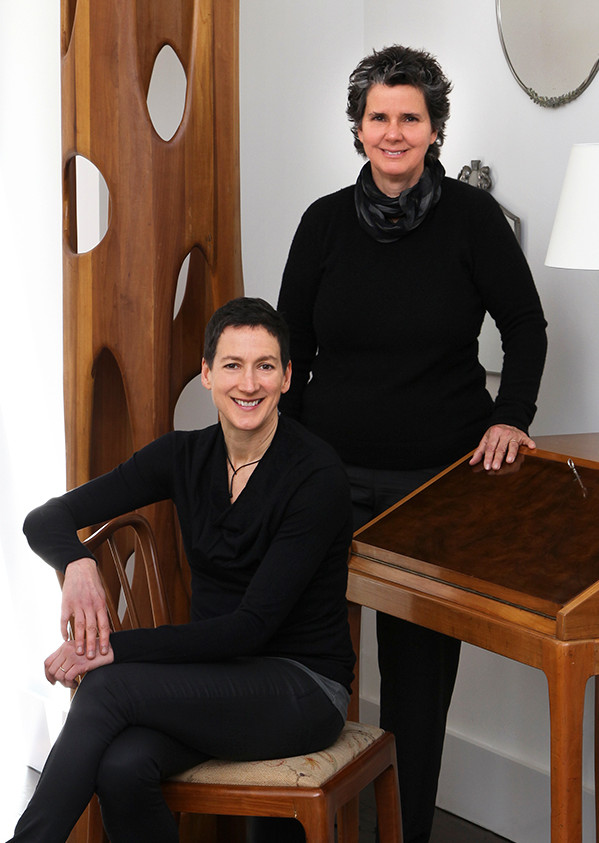 March 27, 2013Juliet Burrows (left) and Kim Hostler founded their eponymous New York gallery in 1998. Top: The pair orchestrated a total gut renovation of their new space (formerly a real estate office) before moving in, turning two floors into one and enabling natural light to pour in.

When someone goes to the trouble of moving in Manhattan, very often it’s in the pursuit of more space. Not so with Hostler Burrows, which recently relocated from its 2,500-square-foot gallery in Tribeca to a spot almost half that size on the budding antiques-mecca that is East 10th Street, south of Union Square. “The nature of the business has changed, with more happening online and at fairs,” says Kim Hostler, who founded the gallery with her wife, Juliet Burrows, in 1998. “The space began to feel almost too big and overwhelming at times. It was just time for a fresh start.”

Today that fresh start takes the form of a floor-through space with high ceilings, an oversize bay window affording a classic New York view of the leafy street, a garden area in back (“which will be landscaped if it ever gets warmer,” says Burrows) and an original marble fireplace with a mantel that’s ideal for displaying the duo’s prime inventory of ceramics.

Specializing in 20th-century Scandinavian design, Hostler Burrows — which was called Antik up until a few years ago — puts an emphasis on the names you’re less likely to have heard of (Wiinblad, Hjorth, Wanscher) alongside ones that are more familiar (Juhl, Mogensen, Frank), but not the blockbusters (Saarinen, Wegner, Jensen). Those expecting a preponderance of blonde, angular wood will be greeted instead with a sensually curved settee upholstered in bright fuchsia velvet by the highly influential Swedish designer Carl Malmsten, circa 1940, or a cast-iron garden planter, circa 1930, by Anna Petrus, a Swedish designer who worked in hard materials like stone and iron and often wove Greek mythological imagery into her work. 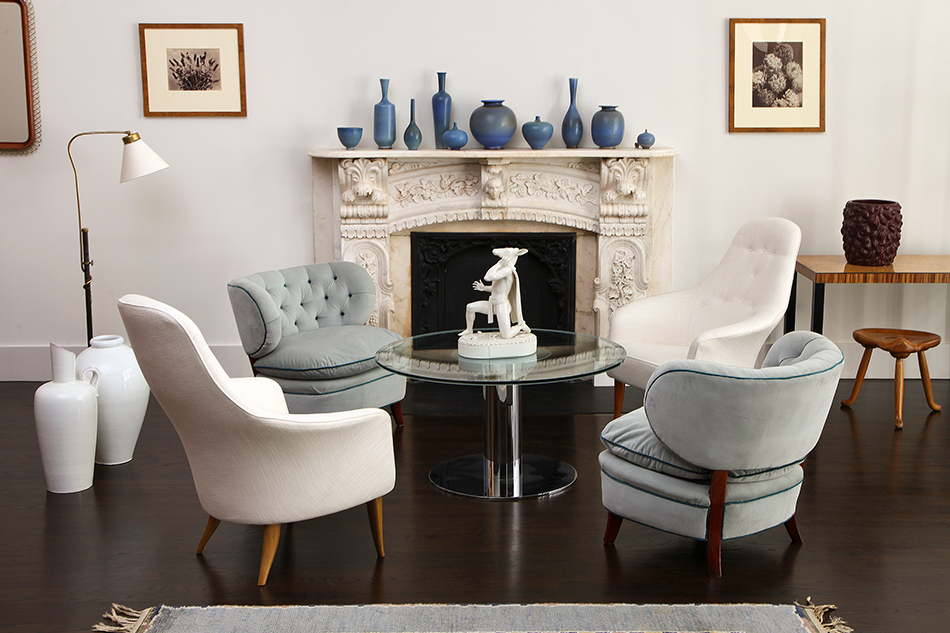 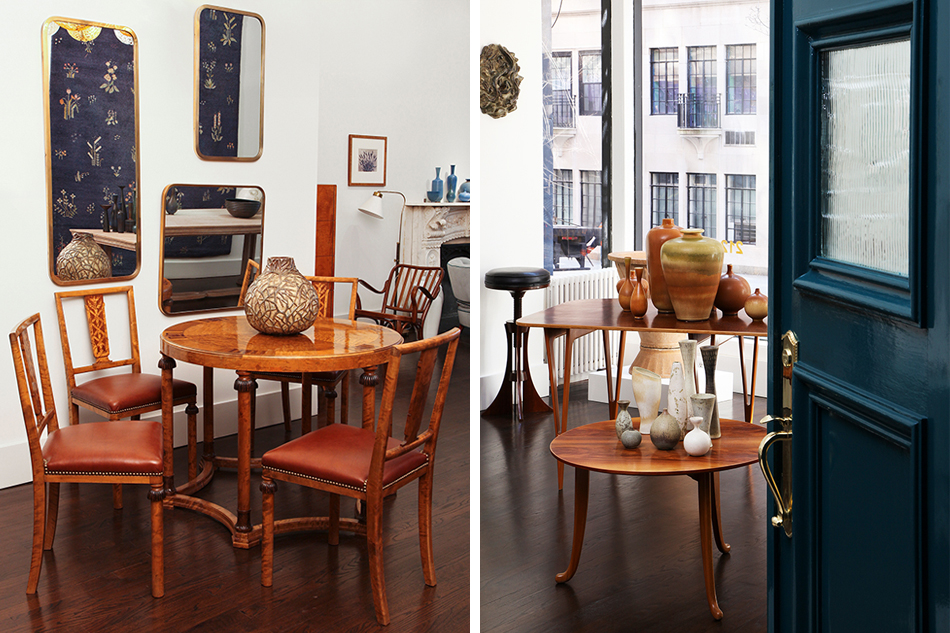 “Ceramics are our first love and what people know us for,” says Juliet Burrows. Pieces include, at left, a large vase, ca. 1950, by Axel Salto, which sits atop an inlaid table with an octagonal base, ca. 1926, surrounded by four rare inlaid birch-and-leather chairs, ca. 1930, all by Axel Einar Hjorth. 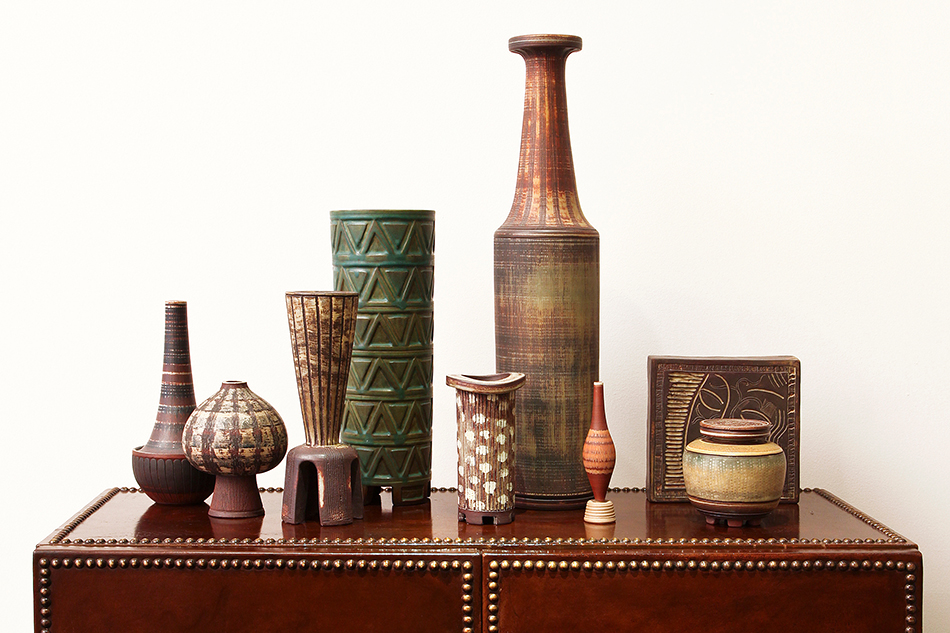 Vessels from the Swedish ceramicist Wilhelm Kåge’s 1950s Farsta series are considered the most desirable of his designs and relatively rare. 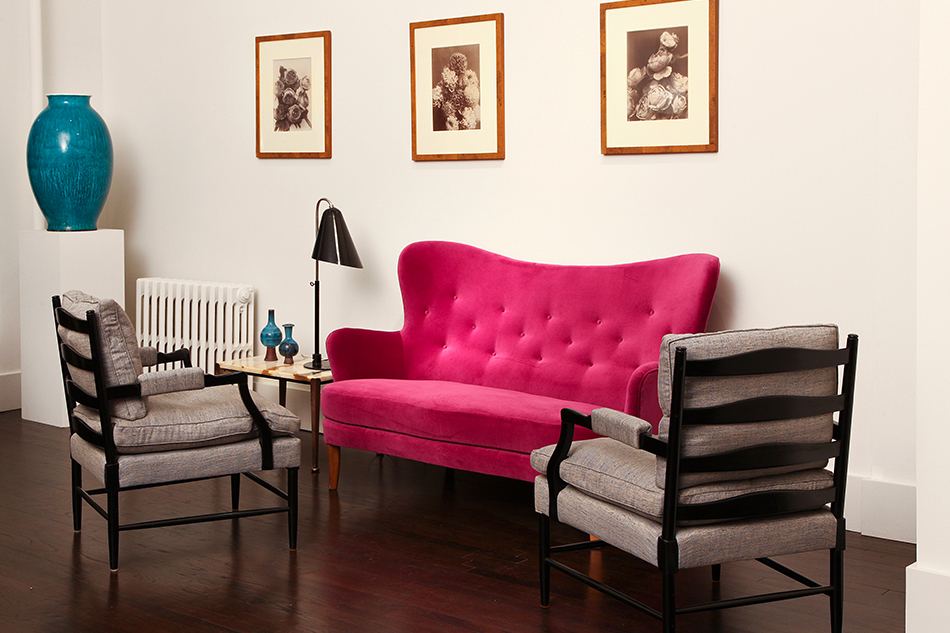 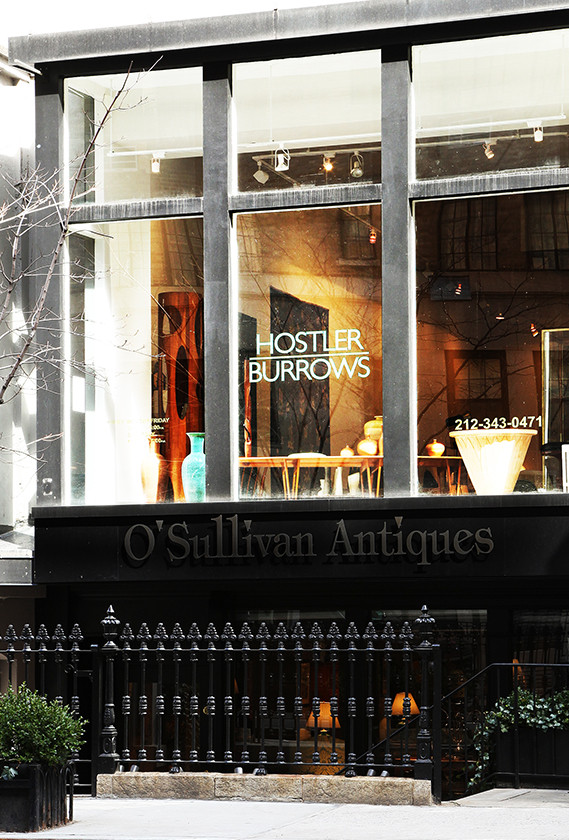 Hostler Burrows further sets itself apart from the Scandinavian crowd by largely focusing on design from the 1920s, ’30s and ’40s, as opposed to mid-century. Of equal standing with the furniture is their collection of ceramics, ranging from an Axel Salto “budding style” green vase, whose bumpy surface is a pleasure to touch, to a collection of intricately patterned stoneware vessels from Wilhelm Kåge’s Farsta series. “Ceramics are our first love and what people know us for,” says Burrows. With the new space, Hostler Burrows has also started selling art: Currently on offer are sepia photographs of plants and flowers, scientific looking in their detail, taken by Charles Aubrey, amazingly, in 1864.

Naturally, not all the inventory can be displayed in the current space. For years, Hostler Burrows was known as a go-to source for large dining tables, but these would quickly pile up Tetris-style in the new shop. As an alternative, says Hostler, they’ve retained a warehouse space in Tribeca where they can meet clients and show them big pieces. The opportunity to focus solely on smaller-scale furniture and accessories in their new location suits them just fine. “The place we created reflects our taste and is a perfect setting for us to express ourselves,” says Hostler. “We wanted the feeling of a very clean, edited environment, almost like a stand at a fair, and I think we achieved that.” Also like a fair stand, the more intimate space allows them to change around the inventory more easily and reconfigure it to accommodate exhibitions.

As for the new neighborhood, the pair couldn’t be more pleased. “Tenth Street was definitely an area we had been looking at when considering a move, as it’s a great destination for twentieth-century design and decorative arts,” says Burrows, “and we wanted to be in an area with more colleagues from our field.” Indeed, Hostler Burrows’s new neighbors include fellow 1stdibs dealers Maison Gerard, O’Sullivan Antiques, Bernd Goeckler Antiques and Ritter Antik, among others. “Tribeca has also changed tremendously in the last ten to fifteen years. It is much less of an arty, avant-garde neighborhood and has become more of a residential area for the financial world,” says Hostler. “Already we’ve had much more walk-in traffic than we were accustomed to in the old gallery.”

Indeed, on a recent early-spring afternoon, passersby steadily dropped in; between visits, Hostler worked on a press release for the Aubrey photos, and Burrows rushed off to pick up the couple’s two daughters, 8 and 11. The last six months have been a whirlwind, but they’re finally starting to feel settled. Says Burrows: “We’re here, we’re fully committed, and we’re open six days a week.” 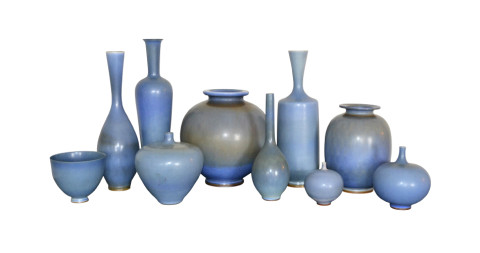 Berndt Friberg’s vases stand apart in the field of 20th-century ceramics for their purity of form and perfect execution. We pieced this collection of cornflower-blue vases together over many years, and it is an exquisite representation of Friberg’s mastery of his art form. The delicacy of the forms and control that Friberg maintained throughout his process, from the wheel to the final glazing, are evident in these varied shapes, ranging from the most tapered and sinuous to the more spherical and bulbous. 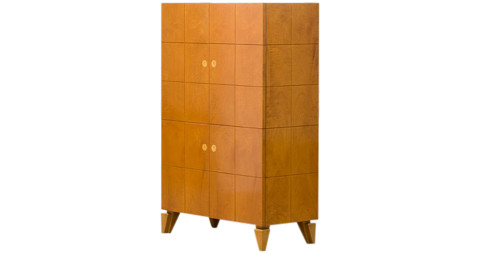 Look at the feet on this cabinet. Axel Einar Hjorth was a genius, a furniture designer with an incredible range of aesthetics and materials in the many pieces he designed over the years as director of the Interiors Department at Nordiska Kompaniet and in his private studio. This cabinet was a commissioned piece for a house in Gothenburg in 1942 and shows the restraint and craftsmanship of a master at the height of his powers. The architectural lines and jewel-box details of this case piece are stunning, right down to the modernist feet on which it is so subtly elevated. 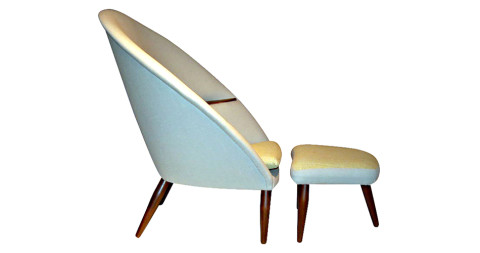 Nanna Ditzel is one of the rare Scandinavian women who gained fame for her furniture designs as well as the jewelry she created for Georg Jensen. For us, this is a rare chair and ottoman that have an unmistakeable femininity. The wide arc of the back envelopes the sitter in a womblike embrace, and the inset armrests in teak are surprising in a subtle and elegant way. The ottoman becomes a visual extension of the chair. 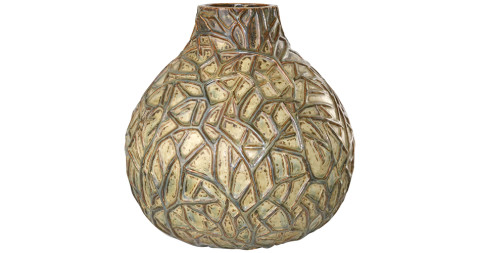 At this point, most people interested in design are at least acquainted with the extraordinary work of Axel Salto. His visionary ceramics, created at Royal Copenhagen in the 1940s and ’50s, were inspired by the forces and energy of the natural world, and they continue to engage and challenge the viewer with their sculptural and powerful presence. This large-scale vase exudes a visceral energy as the vines seem to move and “grow” across the surface of the beautiful Sung glaze. 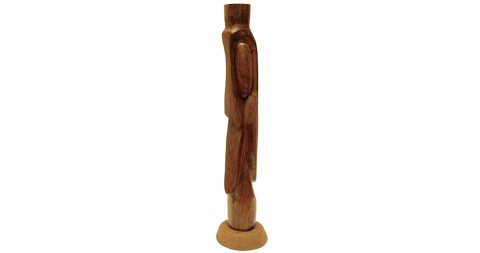 This is one of our rare non-Scandinavian items. Dorazio was an American sculptor who worked in wood and collaborated with some of the great musicians and choreographers of modern dance in New York during the 1960s and ’70s, creating set designs for Eric Hawkins Dance Company. We are pleased to represent his estate and to be showing his works in the new gallery. His sculptures possess Scandinavian qualities: clean, modernist lines, richly crafted wood and evidence of the artist’s hand.