At Hyde Park Antiques, a Love of Design Runs In the Family 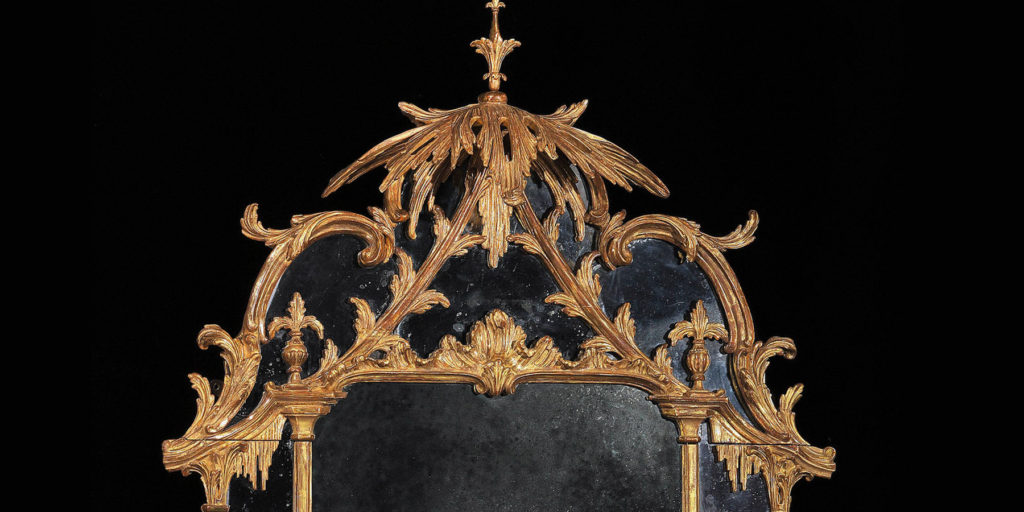 You might say mahogany is imprinted on the DNA of the Karr family, specialists in British design from the Georgian and Regency periods. 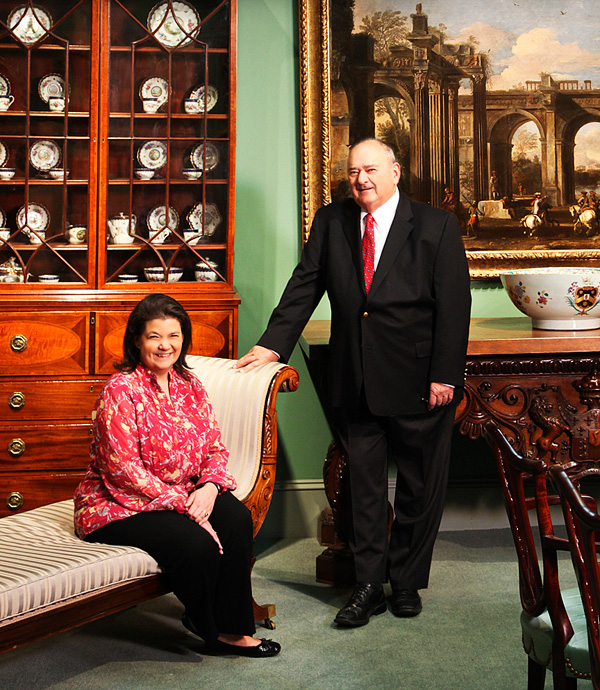 December 12, 2012Together Bernard Karr and his daughter, Rachel — along with his wife and her mother, Barbara — run Hyde Park Antiques, a New York gallery specializing in English design from the Georgian and Regency periods.

Stately, 47-year-old Hyde Park Antiques can trace its roots to a life-altering first date back in 1965, when Barbara Marsak visited Bernie Karr’s Manhattan apartment and found it filled with boxes. The domestic chaos didn’t owe to the usual habits of a bachelor: Karr, who worked for a nonprofit, was painstakingly gathering inventory in hopes of opening his own antiques gallery. “A German beer stein was resting on an American tripod table, under a Continental painting,” remembers Barbara. “I thought: Here is a man who likes not just stuff, but special things. And that made him seem much more special himself. Little did I know how involved with it all I’d soon become!”

Within months of that first date, Bernie opened Hyde Park (named after his favorite London park) on Third Avenue and 27th Street and filled it with antique rugs, Continental furniture and Americana. He and Barbara married a few months later, over Labor Day weekend. “The gallery was closed anyway, so we didn’t lose any precious business,” Bernie recalls with a laugh.

Almost five decades later, the Karrs remain devoted to each other and to their two-story gallery, situated for the past 33 years on Broadway, a few blocks below Union Square, in a 19th-century cast-iron building. “Over time, our love of English design prevailed and eventually we decided to focus our energies on great Georgian furniture,” says Bernie. “I’m proud to say we have the most extensive collection of period English design from the Georgian and Regency periods in the United States.” 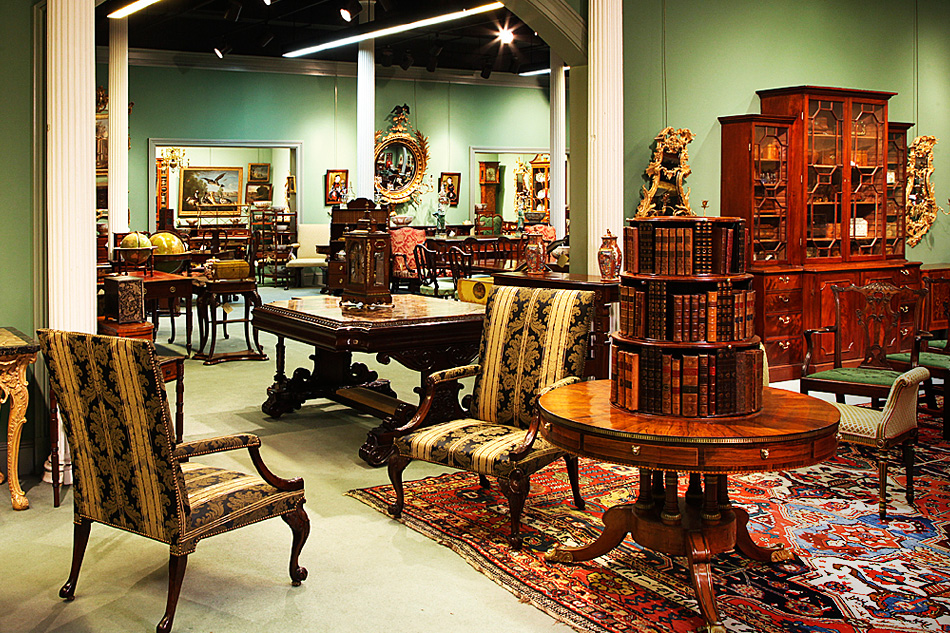 While Hyde Park focuses on British 18th- and 19th-century design, it also carries a selection of Chinese porcelain, English ceramics and a variety of paintings. 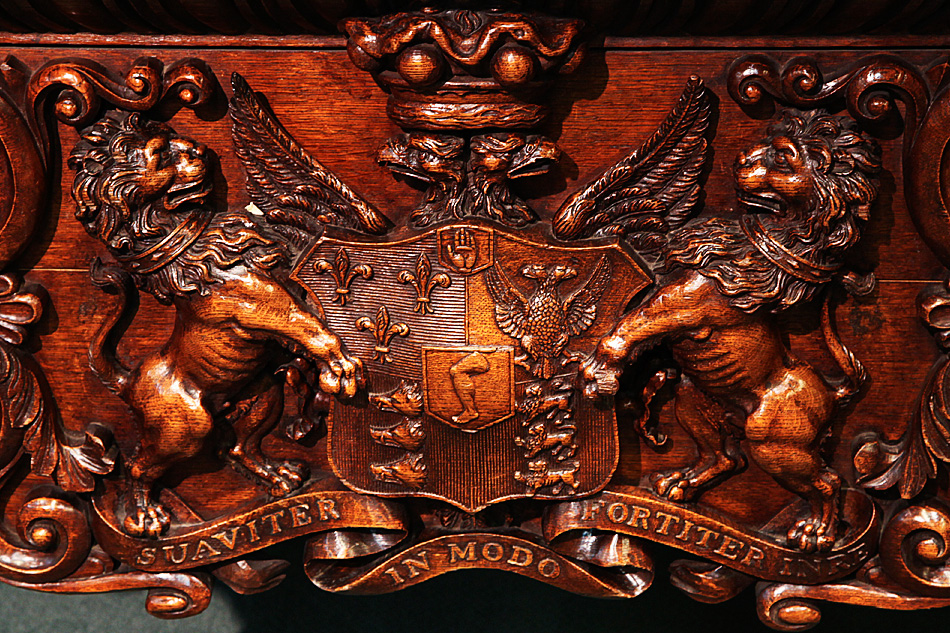 A central cartouche enlivens one in a pair of 19th-century Glynllifon console tables. 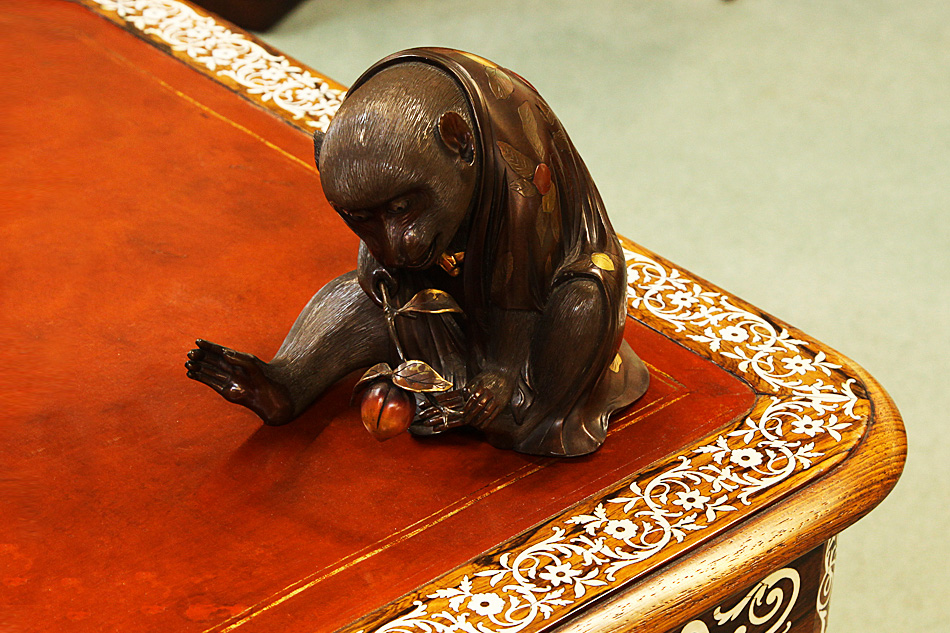 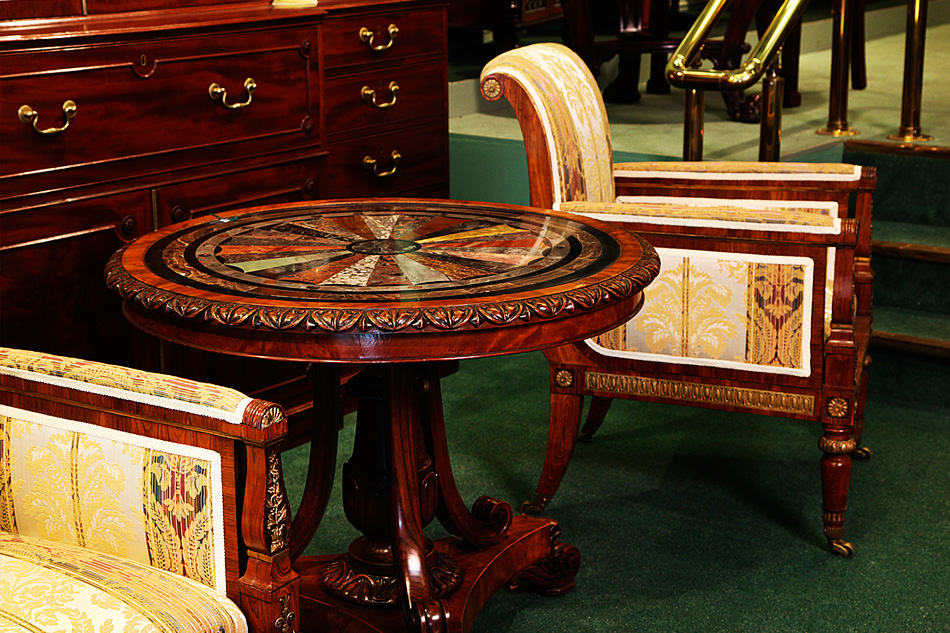 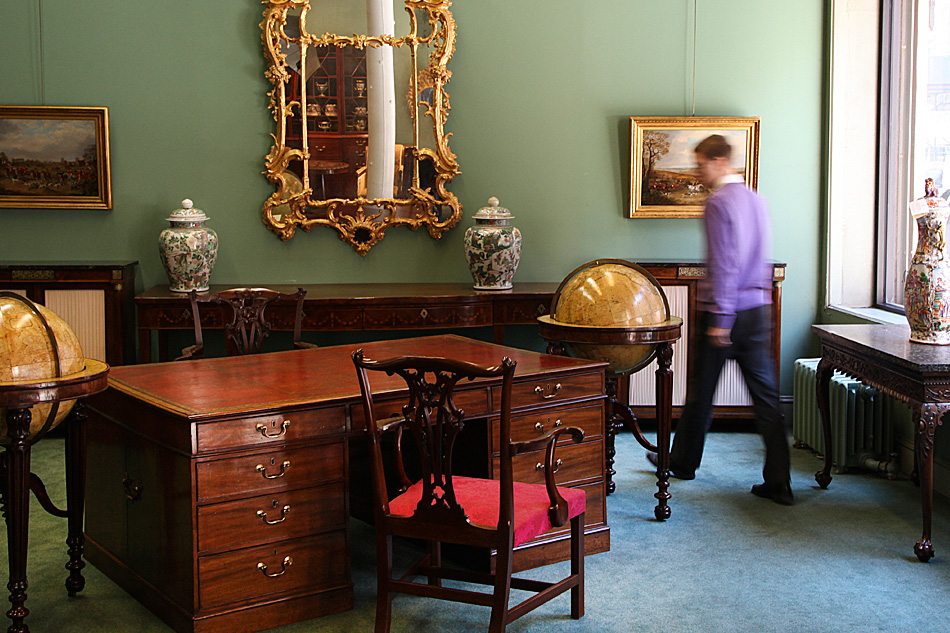 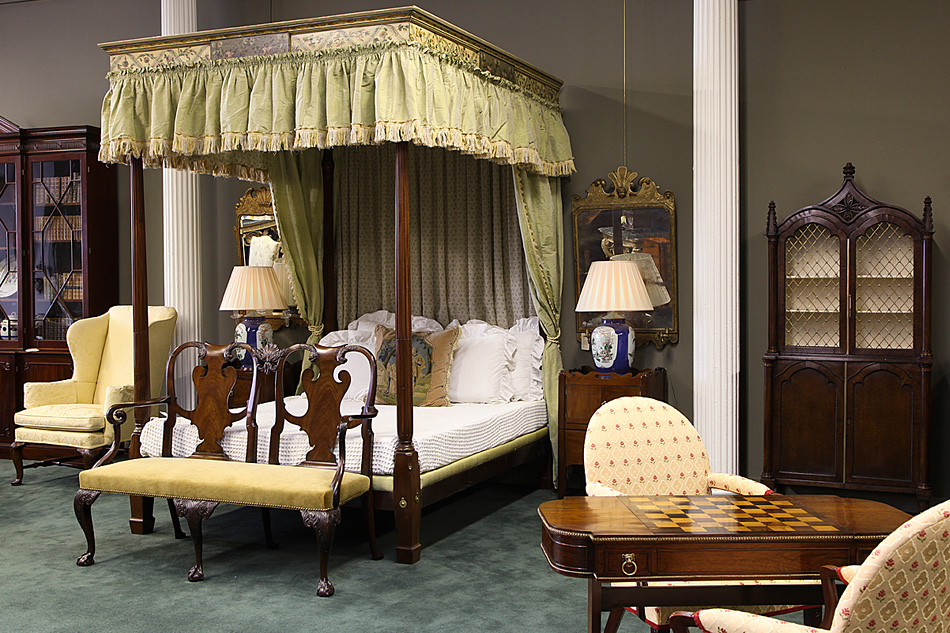 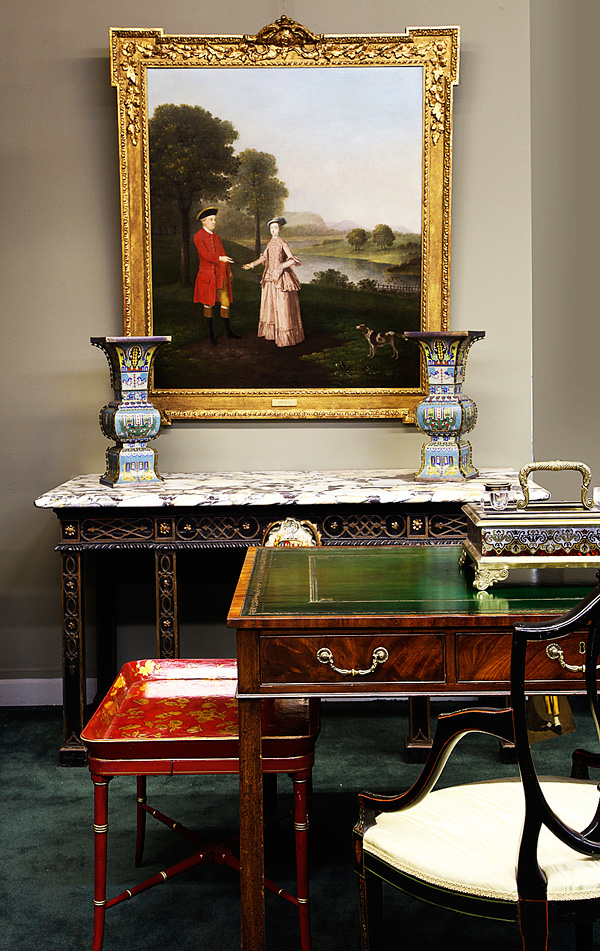 A portrait by 18th-century English painter Arthur Devis hangs over a George II ebonized-and-gilt-marble-top console table that commemorates the marriage of Thomas Pelham to Anne Frankland in 1754, and it bears the arms of both families. In the foreground is a Regency writing table in mahogany, ca. 1785, and a Victorian gilt papier-mâché tray, ca. 1850.

The Karrs’ daughter Rachel, who admits to practically growing up in the store, officially joined the family business in the mid-1990s when she was 25, and she says she felt destined to be there. “I must have mahogany in my DNA,” she says. “When you grow up surrounded by beautiful things and an appreciation for their history, it is hard to think about spending your days without them.”

A stint in her early twenties at the book-publishing house Harry N. Abrams, where she spent a lot of time looking at beautiful fine-art photographs, still serves her well when it comes to arranging thoughtful vignettes throughout the store’s almost 20,000-square-feet of space. “We do not cluster all of one style together,” says Rachel. “Rather, we believe that a Regency writing table can and does look lovely with a Georgian Chippendale chair.” It would also look right at home sharing real estate with other distinguished Hyde Park pieces, such as a George III carved-mahogany library armchair attributed to Thomas Chippendale, circa 1770, or a 117-piece “Palace Ware” Chinese Export dinner service.

What roles do the family members assume when it comes to the store’s daily operations? “No one really has a title here,” Rachel explains. “We have long been jacks-of-all-trades and always will be.” That means, every Karr at some point has wrapped porcelain, kept the books, unloaded new items from the truck, created a dazzling booth for the Winter Antiques Show at the Armory or welcomed customers from around the world. “One late night back in the seventies, Rudolph Nureyev was buzzing to be let in,” says Barbara. “I didn’t realize at first that it was the world-famous dancer, who was also a collector of fine art and antiques. You just never know who is going to walk in — and when!”

The egalitarian way in which the Karrs relate to each other also applies to how they regard their customers. “Hyde Park Antiques has always been open to everyone,” says Bernie. “Even when the other galleries around us were trade-only, we were the first to display price tags. We always want to be accessible.”

The Karrs share their thoughts on a few choice pieces 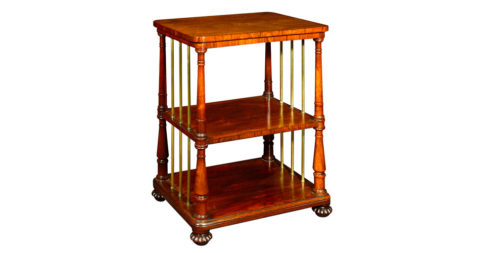 This is a William IV rosewood two-tier stand, ca. 1830. It has brass supports and is raised on four gadrooned feet. It’s such a practical piece for today and could be used in many different ways while the color and vibrancy of the wood make it visually interesting. Who couldn’t use a bit more storage? 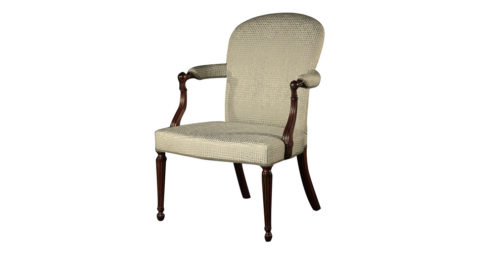 This is one of our absolute favorite chairs in the inventory. We love everything about it, from the proportions to the finely carved terminals on the arms and the round, tapering legs. It could work in any room, in any setting, and it is extremely comfortable. 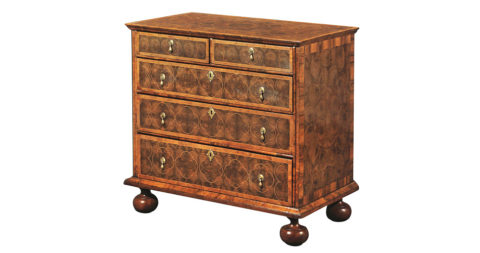 This chest dates to 1700. The term “oyster veneer” refers to the cut of the veneer, specifically the cross-cutting of small branches to create the “oyster” pattern that’s clearly visible not only on the top of the chest, but also on the sides. The cabinetmaker took the time to match these individual veneers perfectly, creating an almost modern feeling with the geometric pattern. 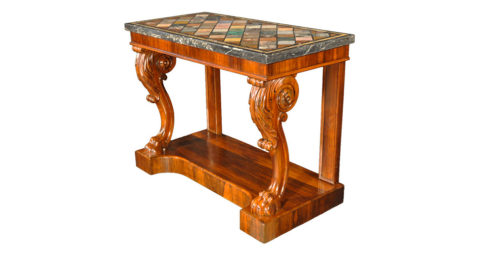 This console table dates to 1825. The specimen-marble top was considered one of the ultimate souvenirs from a Grand Tour of Europe. We have always loved the idea that an Englishman or Englishwoman would arrive in Italy, select a top such as this and have it shipped back to London, where a favorite cabinetmaker would create a custom base. 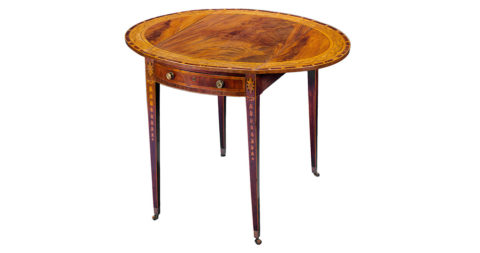 This Pembroke table is truly a superb example of a very typical Georgian form. This table is mahogany and has a lovely band of marquetry inlay on the top and along the square tapering legs. It dates to 1785. Raised on its original castors, this type of table was meant to be movable and was often used for bedside meals. 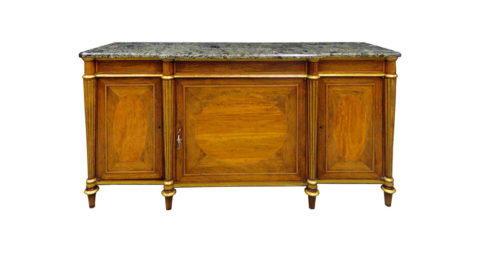 This is a very elegant cabinet, circa 1810. Its design is in the manner of Henry Holland (born 1745), one of the great English designers. He was an important figure in the move away from the foliate carving that had been so popular in the Georgian eras, toward the simple and much cleaner lines of Neoclassicism, which became popular in the Regency period. The use of superb wood, along with the geometric panels flanked by columns, give this piece a contemporary feel.