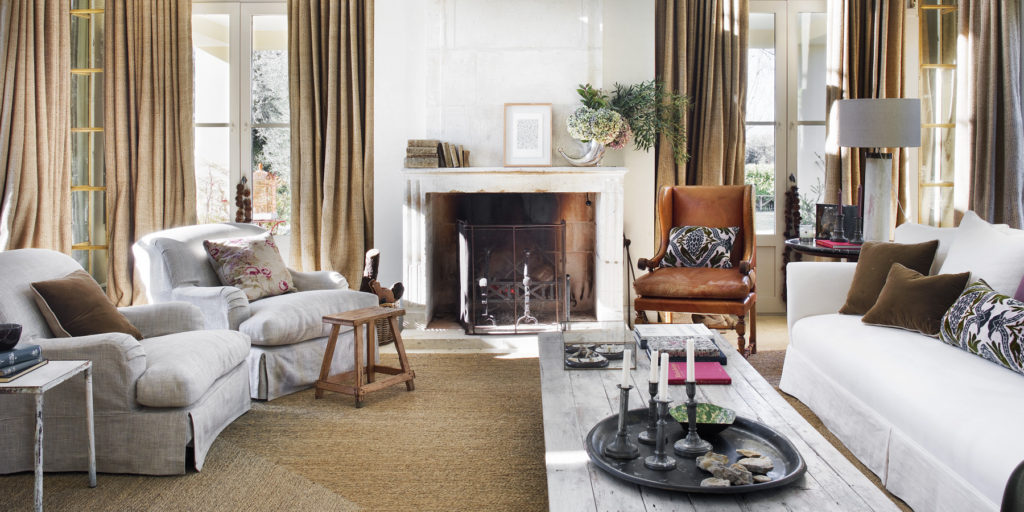 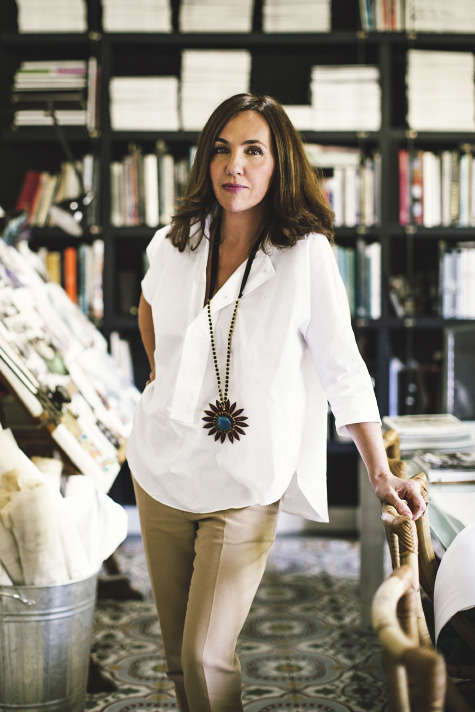 January 9, 2017Isabel López-Quesada, pictured here in her Madrid studio, started her interiors business in 1983, but her reputation really took off when she converted a former wax factory into her own awe-inspiring home, workspace and showroom. Portrait by Pablo Gómez-Ogando. Top: The living room of this country house in Toledo, Spain, features rustic finishes and comfortable seating for a relaxed, lived-in feel. Photo by Montse Garriga

Isabel López-Quesada discovered her passion for her profession at an early age.

“When I was thirteen years old, my mother had to do some redecorating around the house, and she called out to me and my sisters, ‘Who’s coming with me?’ ” López-Quesada recalls. “So, I went with her. By the time we had finished making the rounds of the shops, I’d announced, ‘I’m going to be a decorator.’ And I meant it. I knew what I wanted to do for the rest of my life.”

As an adolescent, López-Quesada collected international design magazines — not easy to come by in the culturally isolated Spain of the 1970s — the way other girls her age collected records and posters of pop stars. By the time she was 20, she had opened her own studio. Early influences were Spanish and Portuguese decorators such as Duarte Pinto Coelho, Pascua Ortega, Paco Muñoz and Fernando Benjumea.

In the following years, her studio achieved a moderate degree of success, but the catalyzing event in López-Quesada’s career — the “before and after moment,” as she puts it, the one that launched her to a whole new level of recognition and clientele — came in 2001. That year she embarked on an ambitious but highly personal project: the conversion of a former wax factory and warehouse into a studio, showroom and home for herself and her family.

Located in El Viso, a discreetly posh neighborhood of Madrid, the factory was built in the 1930s on what were then the outskirts of the city. Working with architect Pablo Carvajal and landscape architect Fernando Caruncho, López-Quesada converted the small-scale industrial compound, which was still impregnated with the romantic aroma of wax, into a virtuoso example of mixed-use functionality, elegance and comfort. 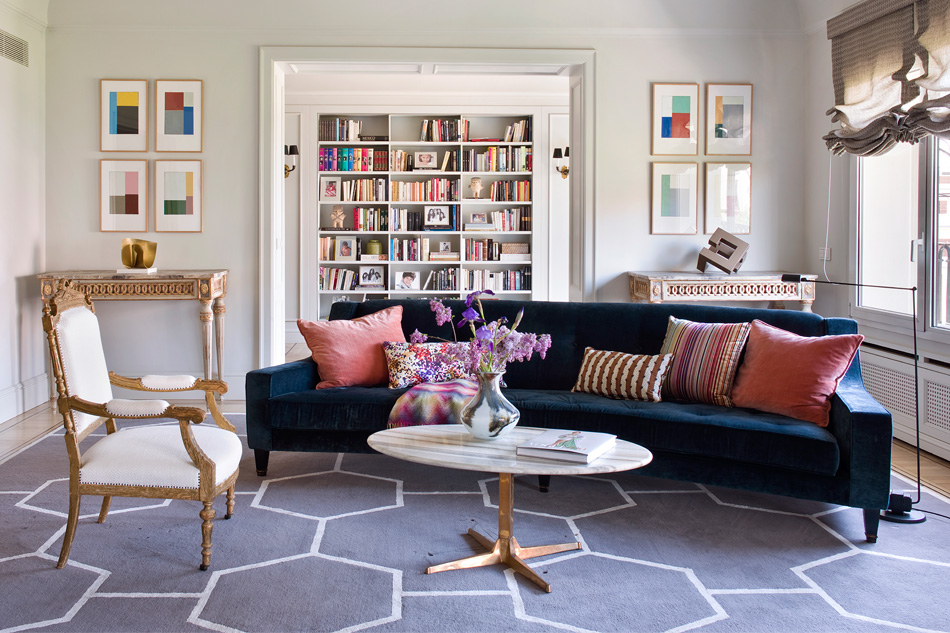 In the living room of this Madrid apartment, López-Quesada created an eclectic mix of furniture, including a contemporary marble-topped coffee table and a classic armchair with nail-head details. Photo by Montse Garriga 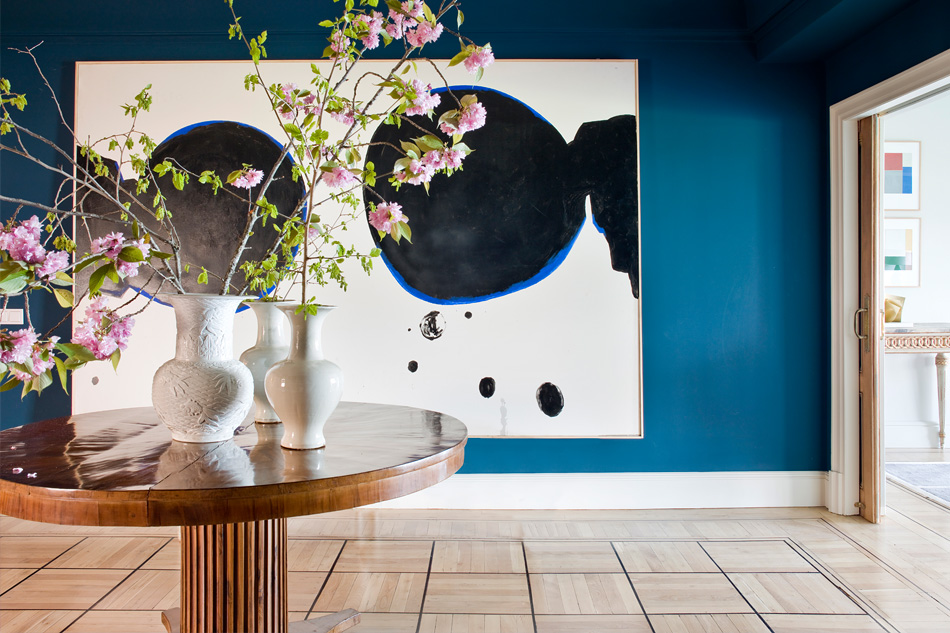 A wall-size painting by Pin Morales pops against the deep blue walls of the home’s entryway. Cherry blossom branches are displayed in a trio of white vases. Photo by Montse Garriga 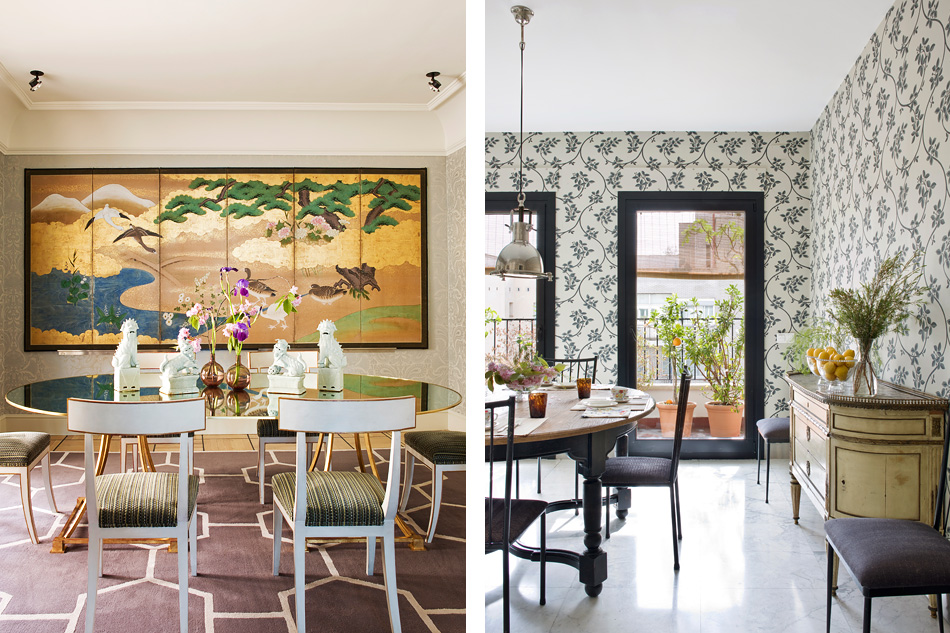 Left: A collection of ceramic Chinese foo dog figures is arranged on the mirror-topped table in the dining room, whose back wall sports a painted screen. Right: Industrial-style pendant lights hang over the kitchen table, contrasting with the botanical wallpaper. Photos by Montse Garriga 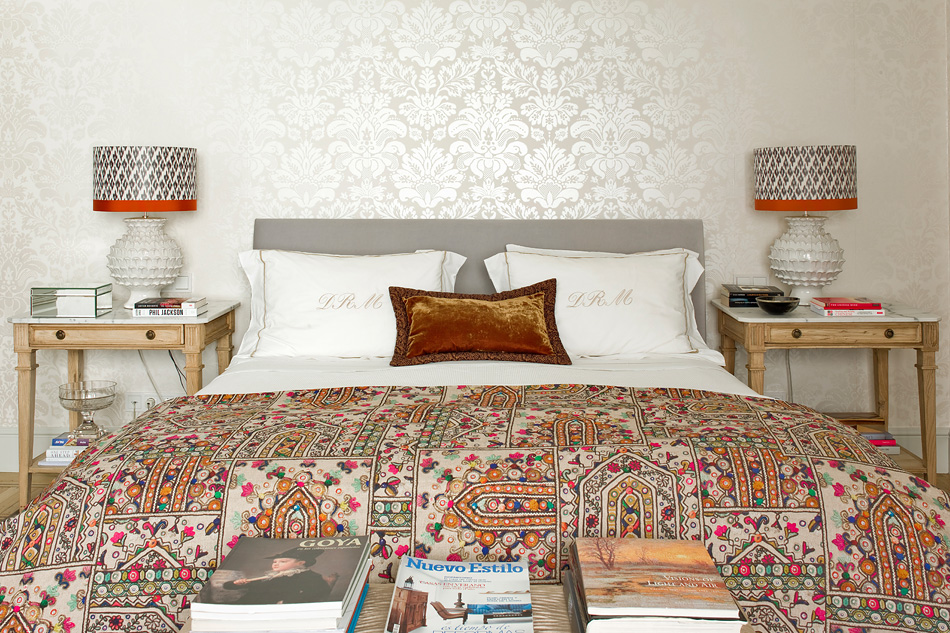 The bedroom of the Madrid apartment features a playful mix of patterns, while the matching bedside tables and lamps create a sense of symmetry. Photo by Montse Garriga 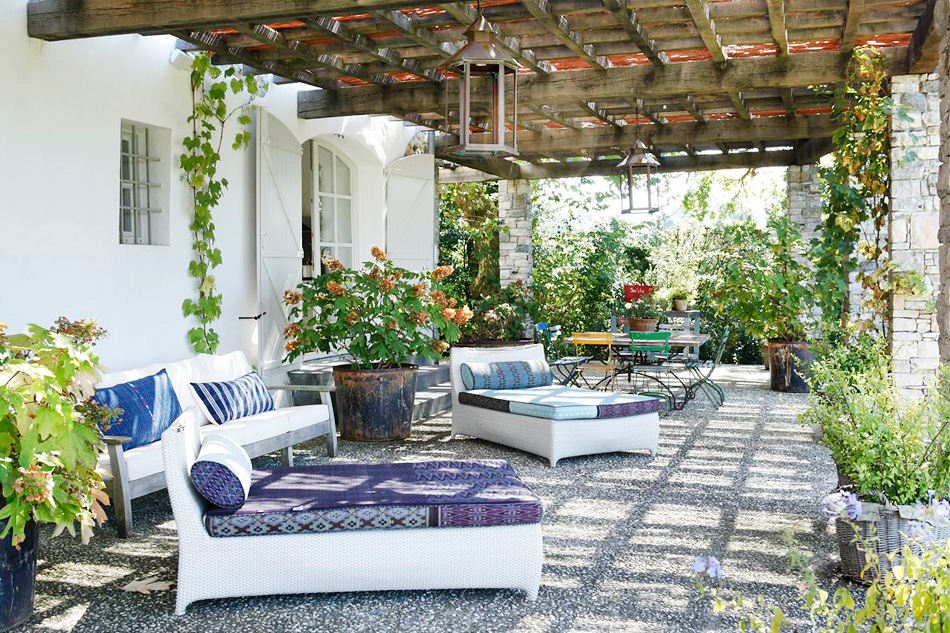 For a farmhouse in Biarritz, France, that López-Quesada designed in 2010, she created a rustic bohemian outdoor space under an oak pergola that shelters wicker daybeds with ikat cushions. Photo by Richard Labougle 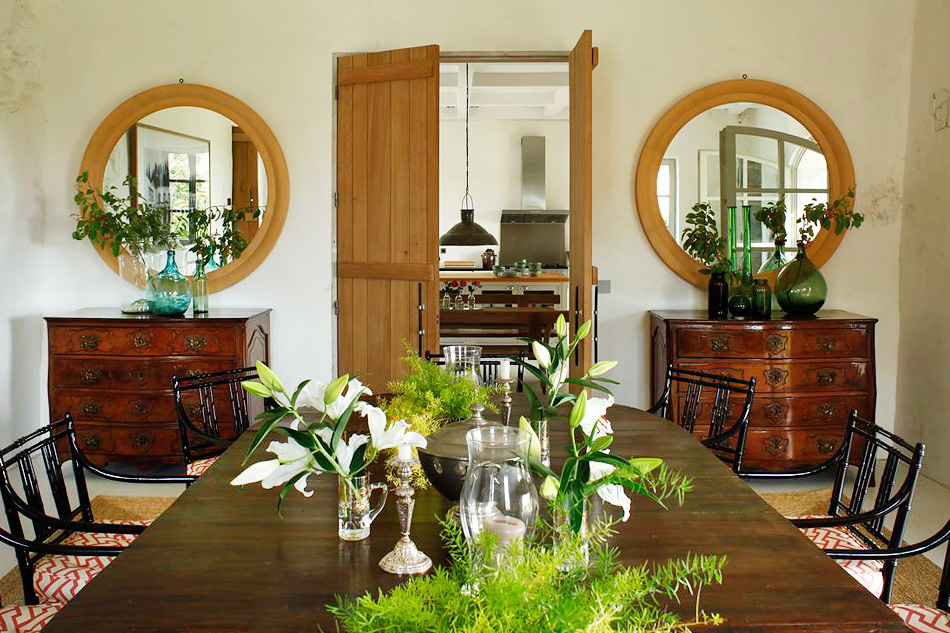 In the dining room, round mirrors and chests of drawers flank the double wood doors, which lead to the kitchen. Flowers and greenery are displayed in groupings of mismatched glass vases. Photo by Richard Labougle 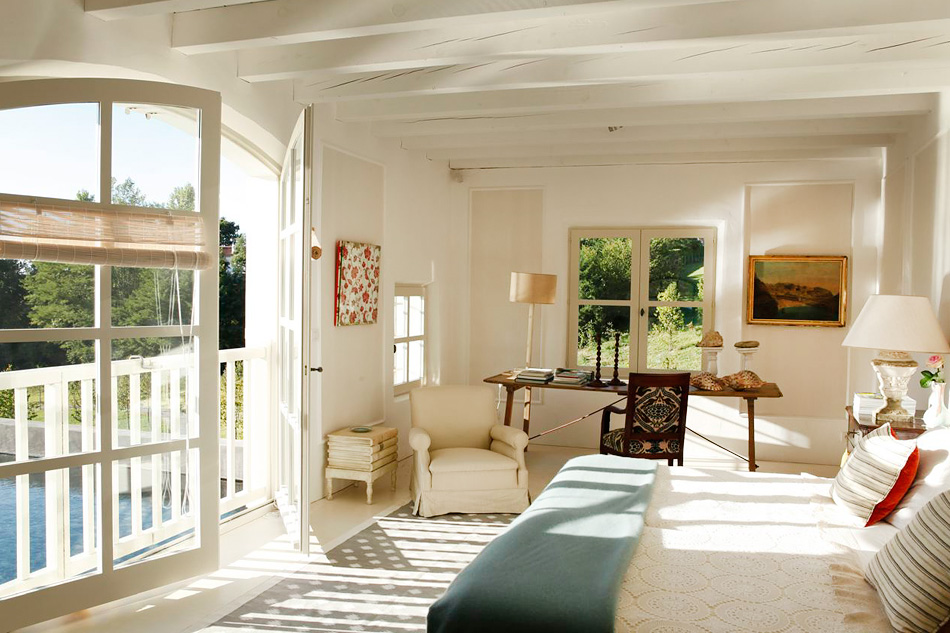 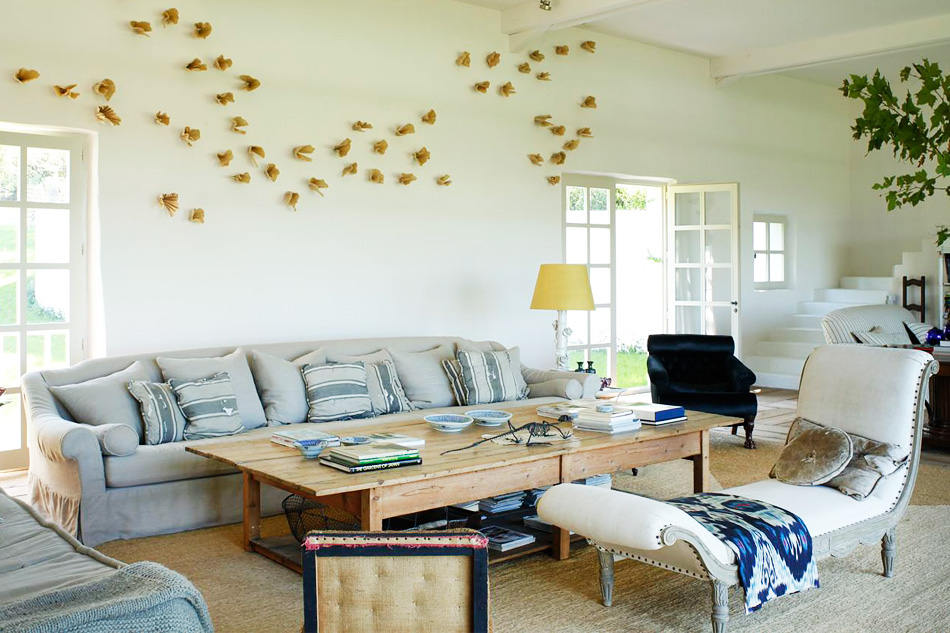 Migration, 2006, an installation by Gloria García Lorca, spans the wall above the extra-long sofa and coffee table. The chaise longue is by Becara. Photo by Ricardo Labougle 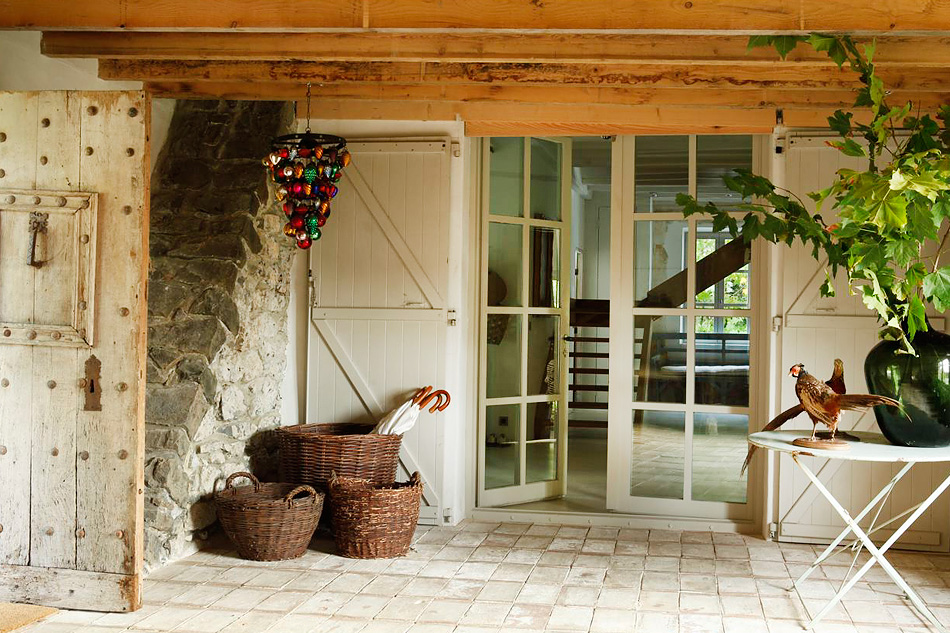 A chandelier of brightly colored bulbs and a pair of stuffed pheasants add a touch of whimsy to this space. Photo by Richard Labougle 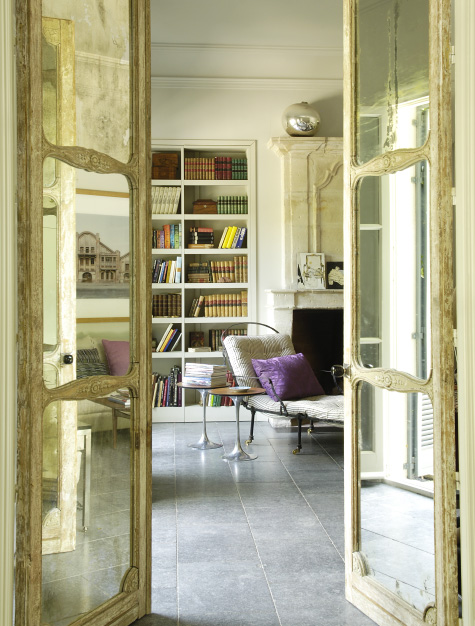 The reclaimed doors leading into López-Quesada’s Madrid living room were from a French palace. Photo by Ricardo Labougle

From the street, the simple facade, with its metal door and ivy covering, gives no hint of what lies behind. Once inside, however, you feel that you’ve been transported into a hidden oasis amid Madrid’s urban mayhem. The studio and showroom occupy the building closest to the street, their different uses overlapping and intermingling within the two-story structure’s continuous open spaces.

Behind that building, and separated from it by courtyards, leafy passageways and other landscaped barriers, is the family residence. Here, the interior spaces are airy and light-filled, punctuated by plants, books and flowing water. López-Quesada has furnished the rooms with a cohesive mix of antiques and mid-century objects — an 18th-century Swedish bench in the entrance hall and a 1950s coffee table in the living room, for example — as well as contemporary art by the likes of José Dávila, Gonzalo Lebrija and Luis Feito López. Altogether, the home radiates sobriety without severity, simplicity without austerity and ease without effort.

Particularly prominent are textures, old and new. There’s the exposed wood of restored furniture, the different weaves of the varied fabrics employed and the rich patinas of recycled tile work. At the same time, López-Quesada freely uses contemporary objects and materials, including innovative textiles, poured concrete and waterproof plaster made to resemble corten steel, as in the curling “Richard Serra” shower she created for a sumptuous summer residence in Greece. 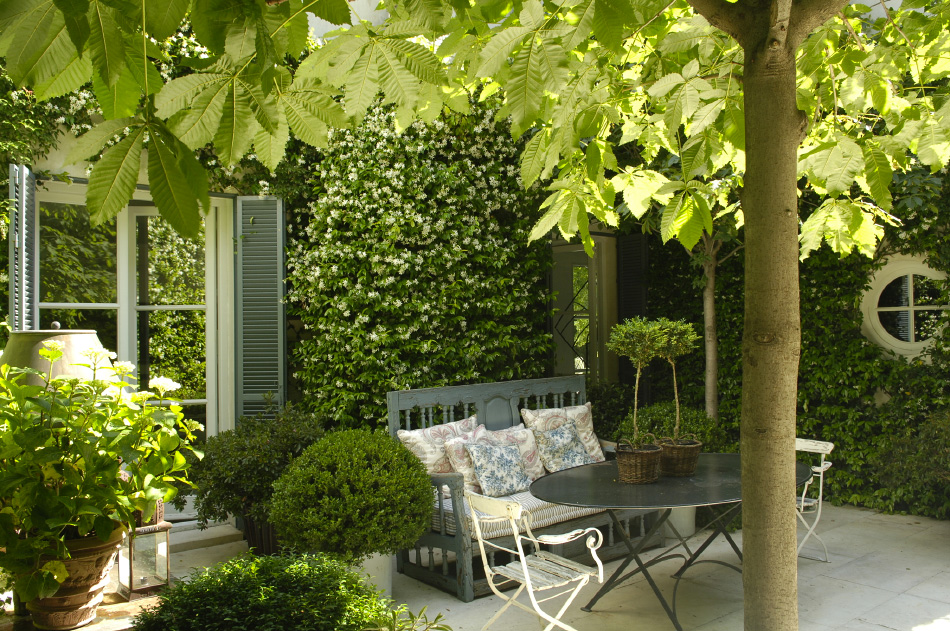 “In my profession, we live in this world of splendor, of dreams and luxury and beauty,” López-Quesada says. “But we also have a great deal of contact with the real world, with the artisans, artists and craftspeople, people who work with their hands.” 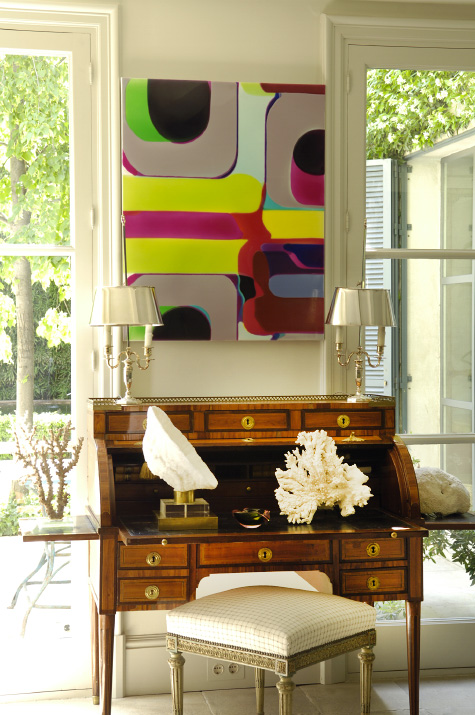 A contemporary artwork hangs above an antique roll-top desk in López-Quesada’s home, illustrating her signature eclecticism. Photo by Ricardo Labougle

In person, López-Quesada emanates strength and sensibility. She speaks of her work with pride and chooses her words with care, her conversation accompanied by the steady, penetrating gaze of her dark eyes. Married to an investment banker and the mother of three grown children, López-Quesada is particularly pleased with her reputation for sensible management — “no foolishness, no excess expenses, a housewife’s mentality” — in her work. And she feels compelled to preserve not only the objects and materials that populate her designs but also the techniques and ways of life of those she works with.

“In my profession, we live in this world of splendor, of dreams and luxury and beauty. But we also have a great deal of contact with the real world, with the artisans, the artists and craftspeople, people who work with their hands,” she says. “We help preserve that sector by bringing it to our clients. It’s a dichotomy. It’s a bit like Robin Hood, but it works. And it’s very satisfying, because the world of wealth has an emptiness to it. It doesn’t interest me.”

Today, the 54-year-old designer cites as inspirations such 20th-century icons as Jean-Michel Frank — “What he does with wood is incredible,” she says — as well as Renzo Mongiardino, John Stefanidis, Le Corbusier and the Bauhaus. She is a fan, as well, of “the glamour” of Italian furniture designer Gabriella Crespi. And she has a particular fondness for 18th-century furnishings, which she acquires throughout Europe, as well as for 20th-century design; among her preferred sources are the Spanish dealer Ramón Portuondo and the Madrid shop Bakelita. But she also frequently incorporates contemporary art into her projects and is an avid collector herself, acquiring works through her sister Inés López-Quesada, a contemporary art dealer at Travesía Cuatro Gallery, in Madrid. 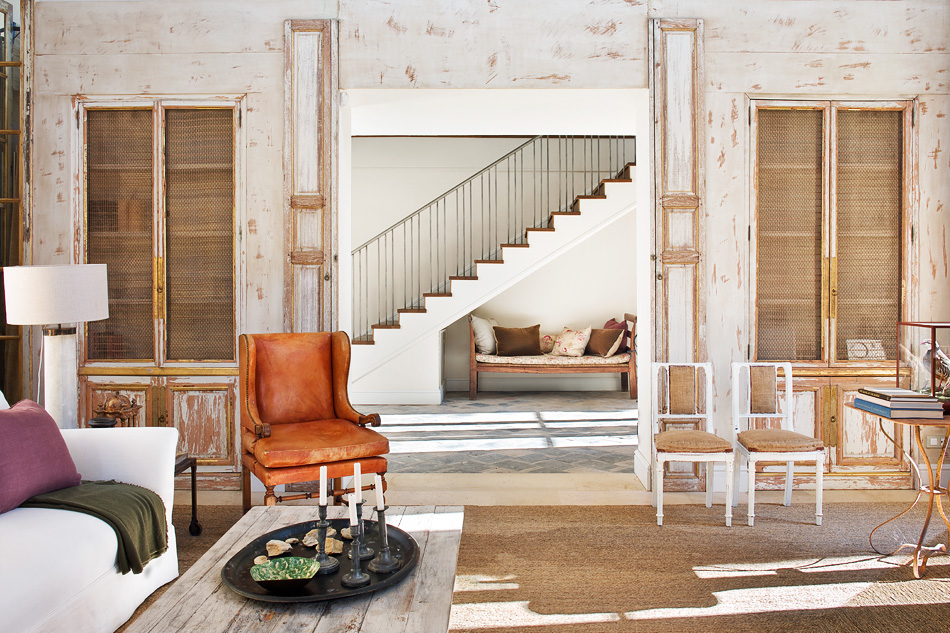 The unfinished walls in the living room of this Toledo, Spain, country house add to the home’s rustic vibe. López-Quesada designed the residence in 2015. Photo by Montse Garriga 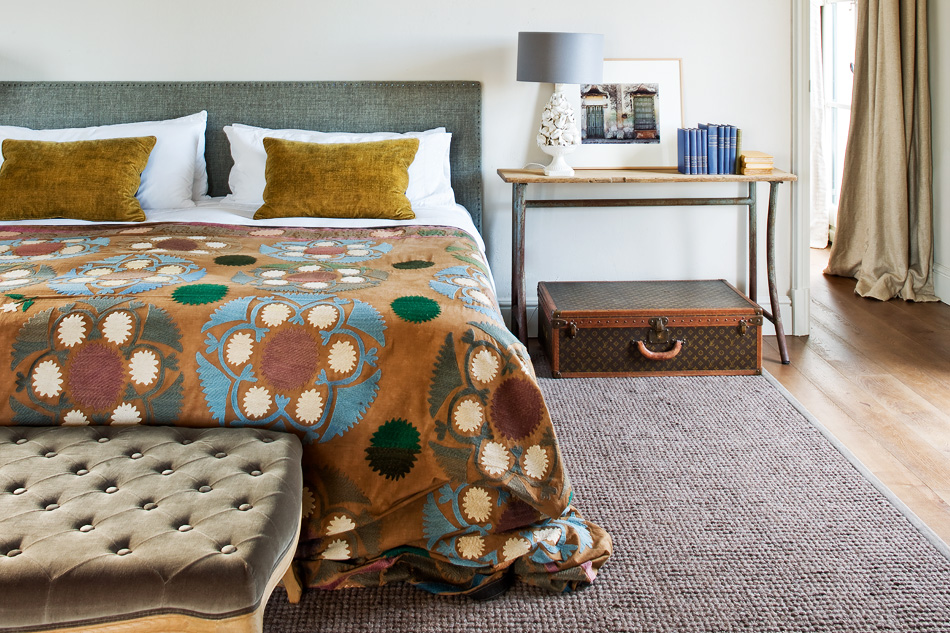 The bedroom includes vintage touches like a Louis Vuitton suitcase with nail-head trim and a tufted velvet bench. Photo by Montse Garriga 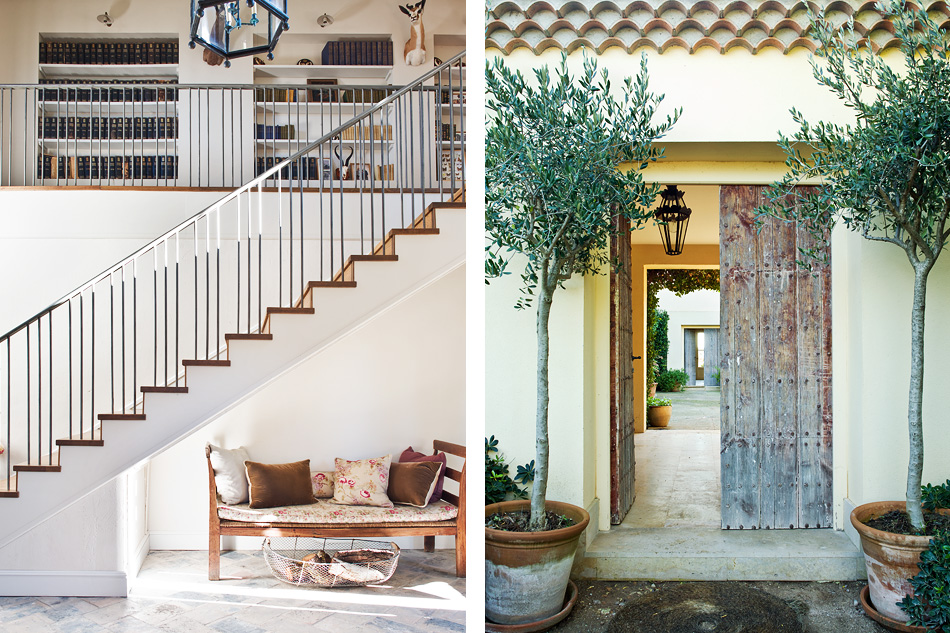 Left: On the stairway landing are built-in bookshelves interspersed with mounted animal heads. Right: Flanked by potted trees, the entryway leads through the home to the courtyard. Photos by Montse Garriga 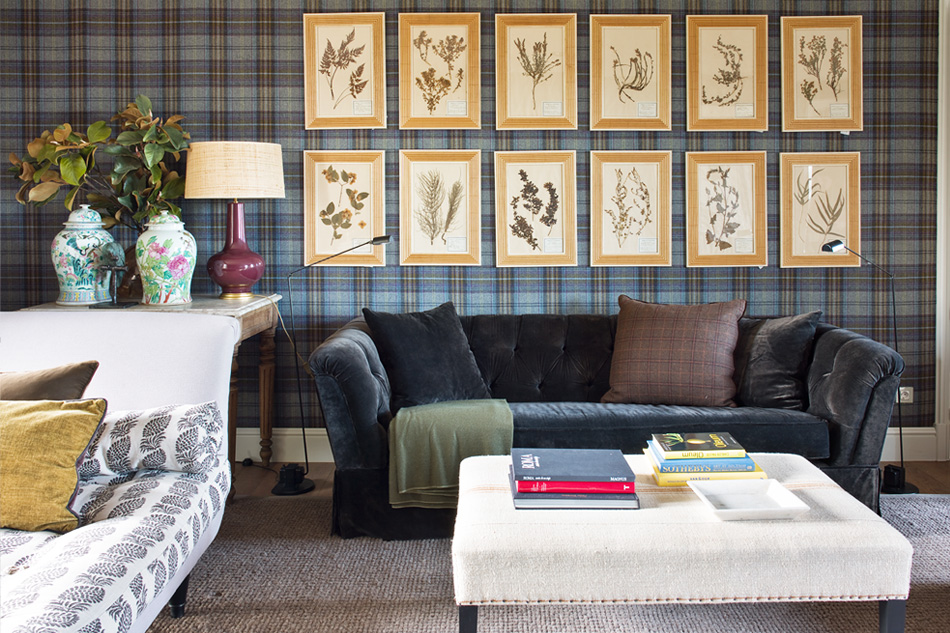 A series of botanical prints hangs above the velvet tufted sofa in this cozy, texture-rich space. Photo by Montse Garriga 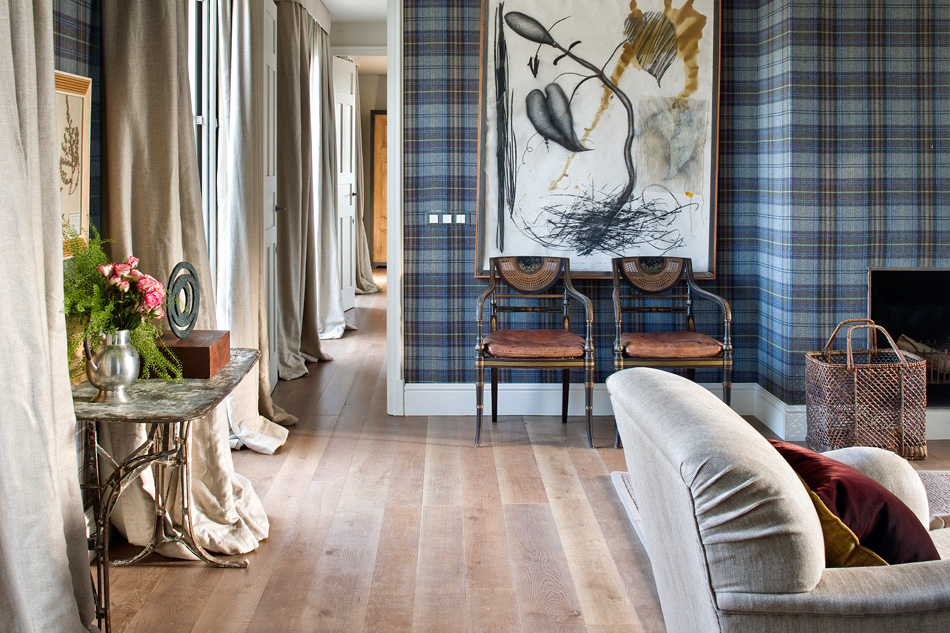 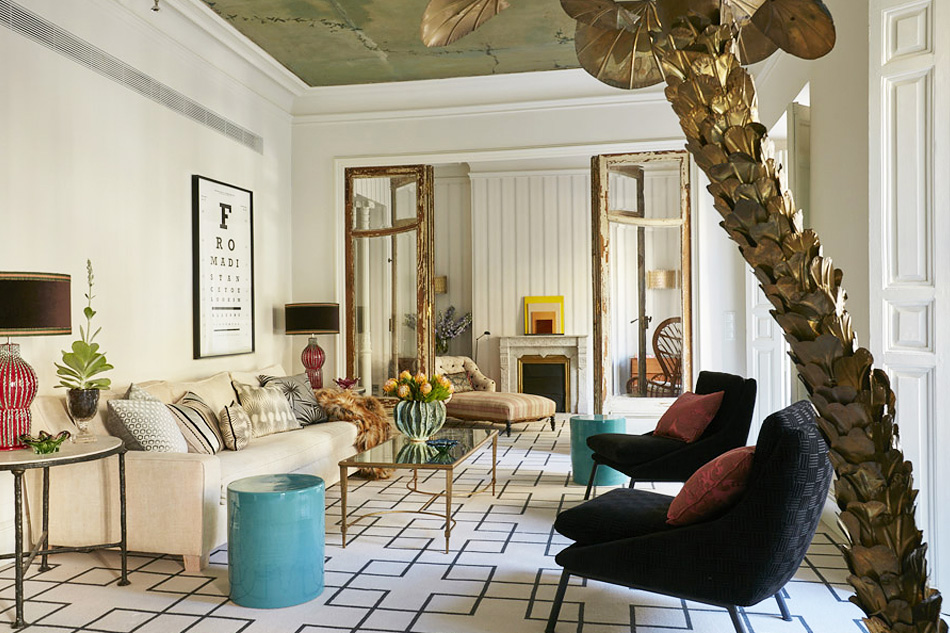 Hanging above the sofa in this Madrid pied-à-terre is Untitled, 2015, by John Isaacs. The room contains a lively mix of furniture and accessories, including a golden palm tree and a pair of bright red English lamps. Photo by Richard Labougle 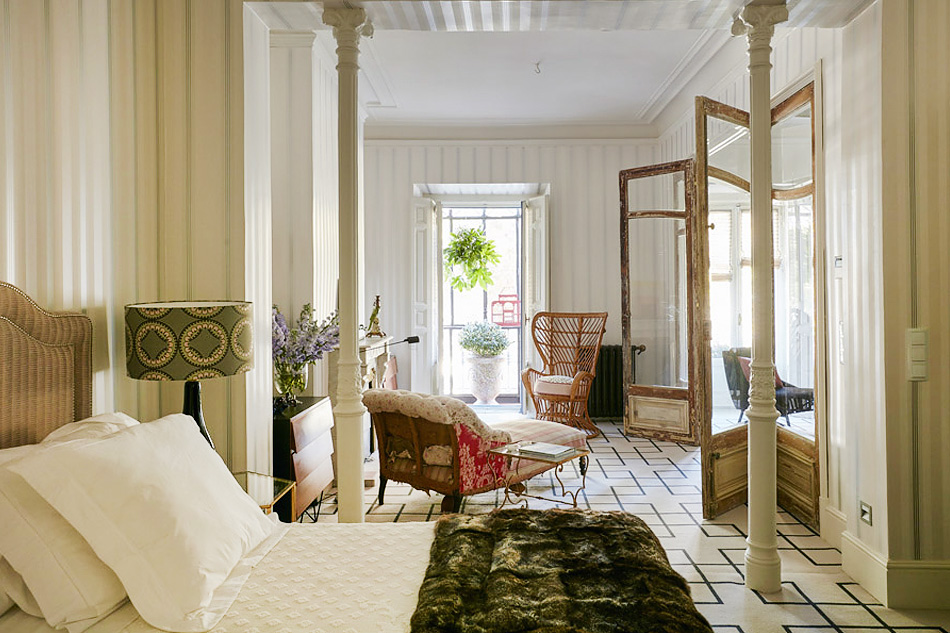 The airy bedroom suite includes a light-filled sitting area, which is separated from the living room by a pair of distressed French doors. Photo by Richard Labougle 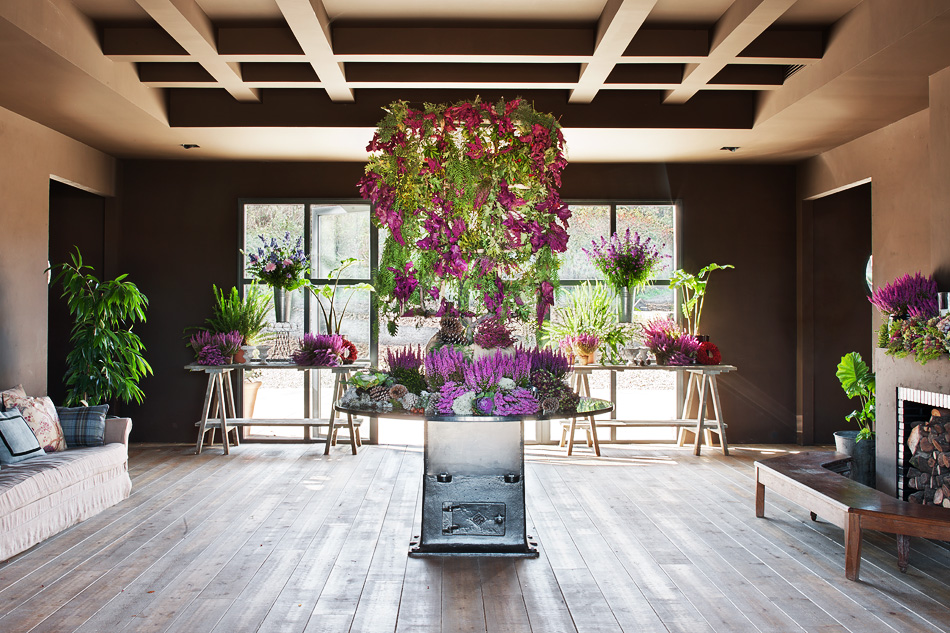 López-Quesada designed Las Tenadas, an estate-turned-event-space outside Madrid, between January and May of 2014. Photo by Montse Garriga 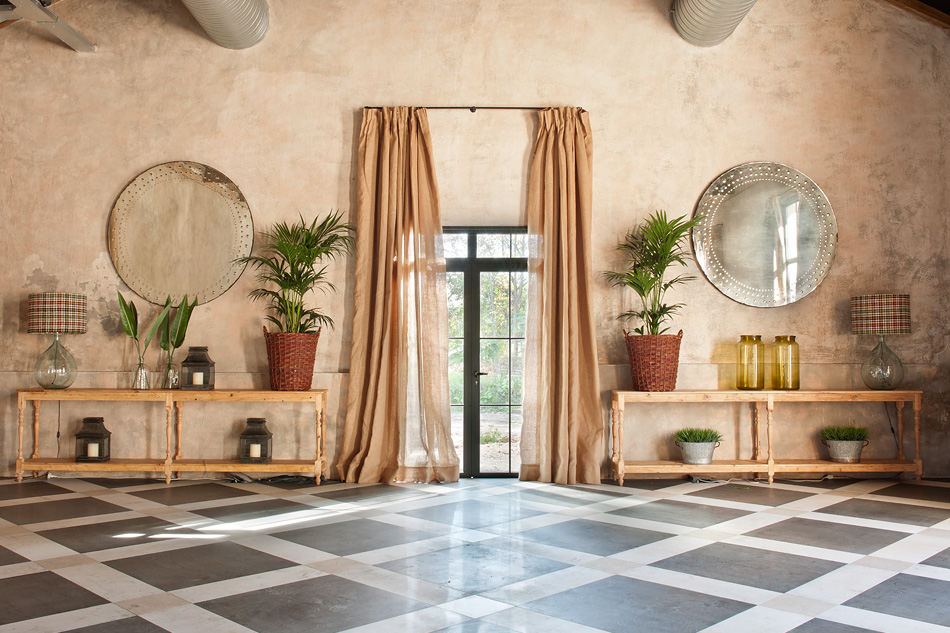 She cultivated an air of rustic elegance in the space, which has high ceilings with exposed beams, bricks and ductwork. Photo by Montse Garriga 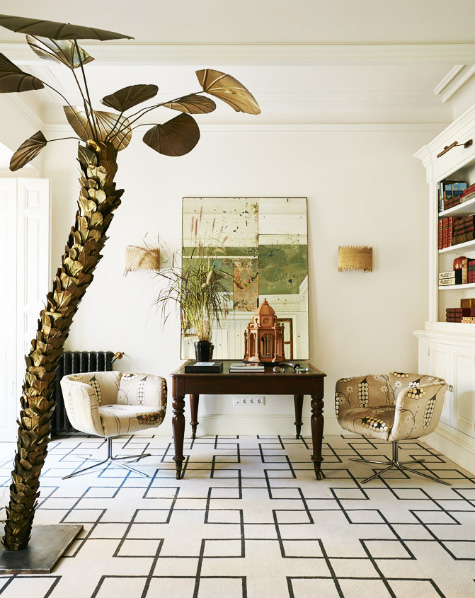 In this room in an 18th-century Madrid pied-à-terre, López-Quesada balanced the bold carpet and vibrant accent pieces with neutral walls. Photo by Ricardo Labougle

While López-Quesada’s El Viso compound established her as Spain’s go-to designer for projects involving conversion and repurposing, it also helped extend her client base beyond Spain, through the coverage it received in the international press and extensive word of mouth. The intervening years have brought her commissions such as a residence in a converted barn on a former dairy farm in Chadds Ford, Pennsylvania, and a current project in Malta that involves seamlessly consolidating three existing houses and a garage into a single-family compound.

Not all of López-Quesada’s projects, however, involve reuse. In fact, although decorating private residences remains her primary focus, she has also established a sort of parallel career working for such corporate clients as Telefónica (Spain’s leading telecommunications company) and Iberia Airlines. For the renewable-energy company Acciona, she decorated the executive headquarters in a distinctly corporate-modern style, matching the company’s vibe with decor items like Barcelona chairs and a cashmere-covered sofa of her own design while employing a simple palette of browns and earth tones.

In addition, she has decorated Spanish embassies in Doha, Dakar and — her favorite — Tokyo, whose interiors she redid in 2005. The embassy’s 1920s building was designed by an American architect (who was also a priest) in a distinctly American idiom: large transom windows, a predominance of wood, an abundance of moldings. López-Quesada took great pains to retain the original feel while adding lavish carpeting and her treasured 18th-century antiques.

Indeed, her capacity for eclecticism, in López-Quesada’s view, is perhaps her strongest suit and the source of her greatest professional satisfaction. “It’s like being the kind of actress who can play any role. For example, like Meryl Streep, you can play a teary-eyed New York City divorcée, or you can sing and dance in Mamma Mia!” López-Quesada says. “That’s what’s best — to not always do the same thing, to have what actors call different registers. You can be dramatic, or you can be funny, or you can do whatever you want.” 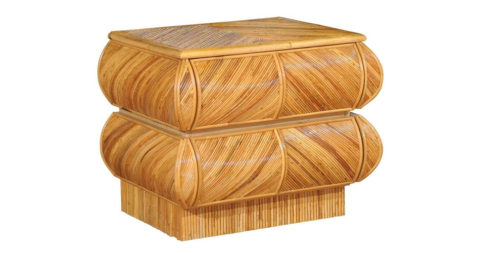 “I wouldn’t mind using this in one of my projects in the Caribbean.” 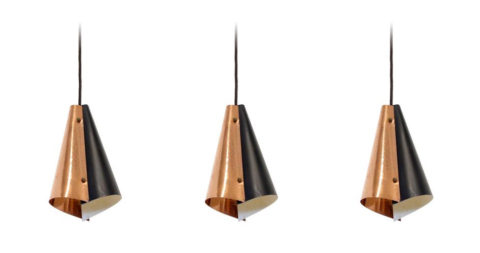 “I like that there are three of them, the combination of black and white and gold, and I like their form.” 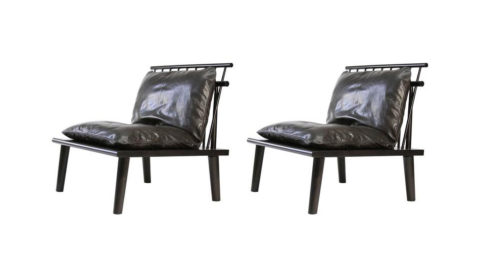 “Their shape is amazing. And then there’s that leather.” 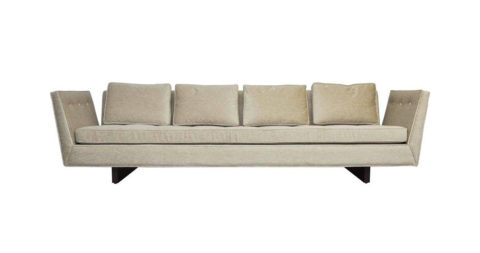 “I love the overall line, with those open arms. And it’s so incredibly long. It’s super cool.” 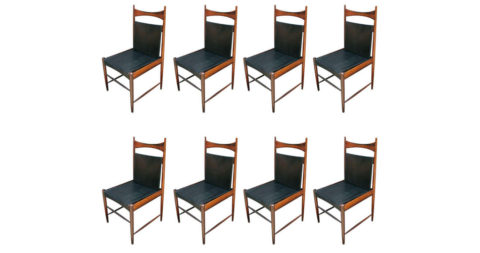 “I love the combination of wood and black leather. I would use them in a dining room design.” 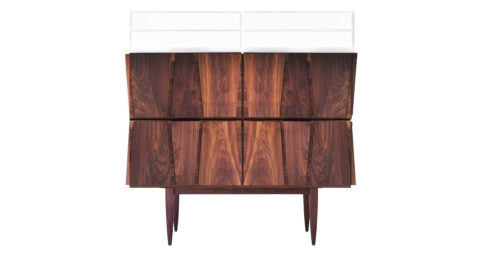 “The wood is wonderful.”