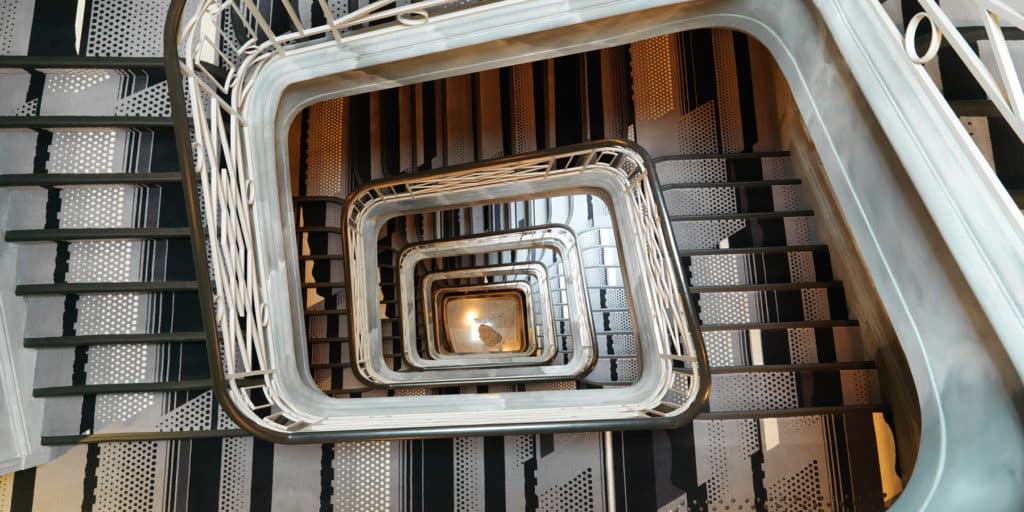 At a new boutique retreat in the aristocratic 1st arrondissement, the French designer extraordinaire has put a surprising noir-ish spin on Art Deco, French Moderne and mid-century style, with a touch of Louis XVI thrown in for good measure. 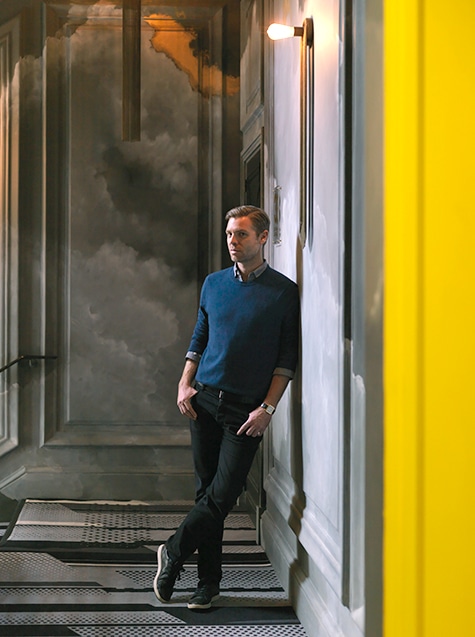 August 7, 2017At Paris’s recently opened 45-room Nolinski hotel, French architect and interior designer Jean-Louis Deniot (above) reimagined a former office building as a fantastical place to spend the night. Top: A spiraling central staircase brings guests up to their rooms from the hotel’s ground floor public salons. All photos by David Oliver, unless otherwise noted

Paris is no stranger to high-design hotels. Most recently, the years-long renovations and relaunches of two of the city’s grandest of grande dame palace hotels have pulled focus: The Ritz now sparkles with new 18th-century-inspired decor by Thierry W. Despont, and the Crillon was reimagined by a team that includes Tristan Auer, Chahan Minassian, and Karl Lagerfeld.

Amid all this, a small jewel box of a hotel quietly made its debut last September. The Nolinski comprises 45 rooms and suites, plus a brasserie, the clubby Grand Salon and a subterranean spa and pool, all spread across the six floors of an 1880 Haussmannian edifice near the Palais Garnier, Palais Royal, Louvre and Tuileries.

To convert the former office building into a hotel, the Evok group, the hotel’s owner, turned to designer Jean-Louis Deniot, known for creating elevated, eclectic residences in France and abroad. At the Nolinski, Deniot transformed what he describes as “classic office space, with white walls and drop ceilings” into the epitome of his signature timeless, tailored and unequivocally luxe look.

A carefully curated mélange of eras and aesthetics — Louis XVI and Art Deco, mid-century modern and contemporary — extends from the Carrara marble entry to the jade-hued Grand Salon, up the stair hall, which Deniot had painted with a stormy-sky-evoking mural, and into the guest rooms. In these, unique artworks and antiques selected by Deniot ensure a residential ambience. 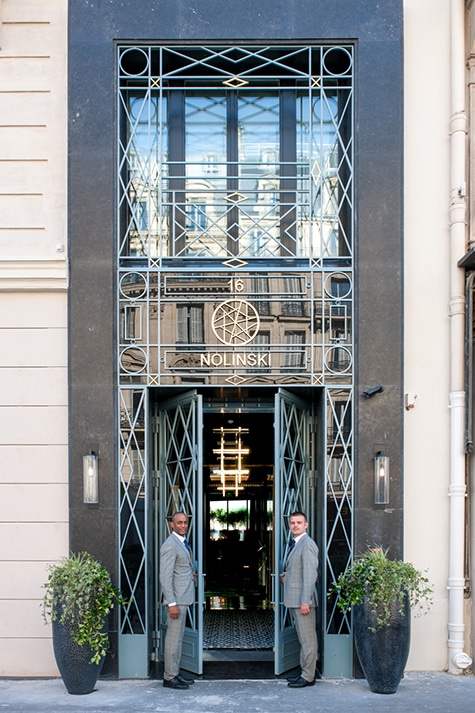 The hotel occupies a late-19th-century Haussmannian building whose staid exterior belies the wonders found within. Photo courtesy of the Nolinski Paris

The main idea was to realize something very Parisian. So, I based the decoration on that of a private house, following a residential format and progression from entryway to entrance hall, Grand Salon, private salon and so on. I wanted to give a particular atmosphere to each area. I created the guest rooms like apartments, so that travelers, when entering, can appropriate the space as their own. It becomes personal. It was important for me to try to draw away from a hotel atmosphere and to get closer to a private feeling.

The Palais Garnier and the Comédie Française. I had the idea to create a contemporary version of theatrical decor, as if the guests were on a stage.

The aim was to avoid any white or bright reflective surfaces.

Everything has been treated with dark finishes to immerse the visitor instantly in an atmosphere that remains rigorously the same both day and night. I borrowed my palette from the colors of the Parisian sky at dusk, with rich, moody tones of gray, blue and green.

With the theatrical idea in mind, we selected all materials to captivate the audience’s curiosity. We used mostly polished finishes, such as bronze and high-gloss panels, and lots of decorative painting hand rendered by artists. We displayed those finishes to surprising effect, using something unconventional, never before seen. 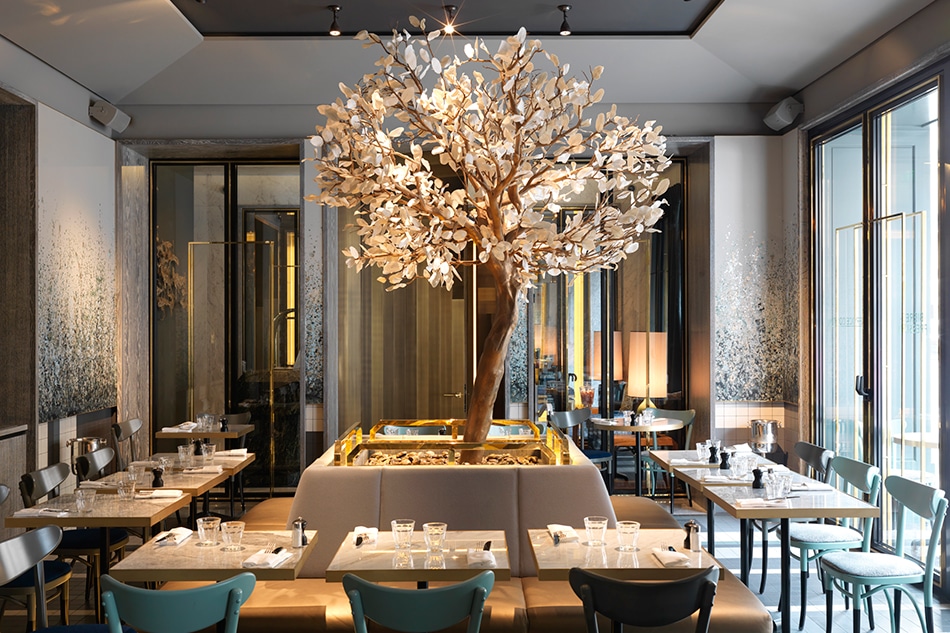 Deniot says he used “typical French materials” in unexpected ways in the hotel’s restaurant, Brasserie Réjane. These include ceramic tiles for the floor and painted canvas on the wall, oak for the chairs, brass in the ceiling lights and tables and eglomise glass for the mirrors. 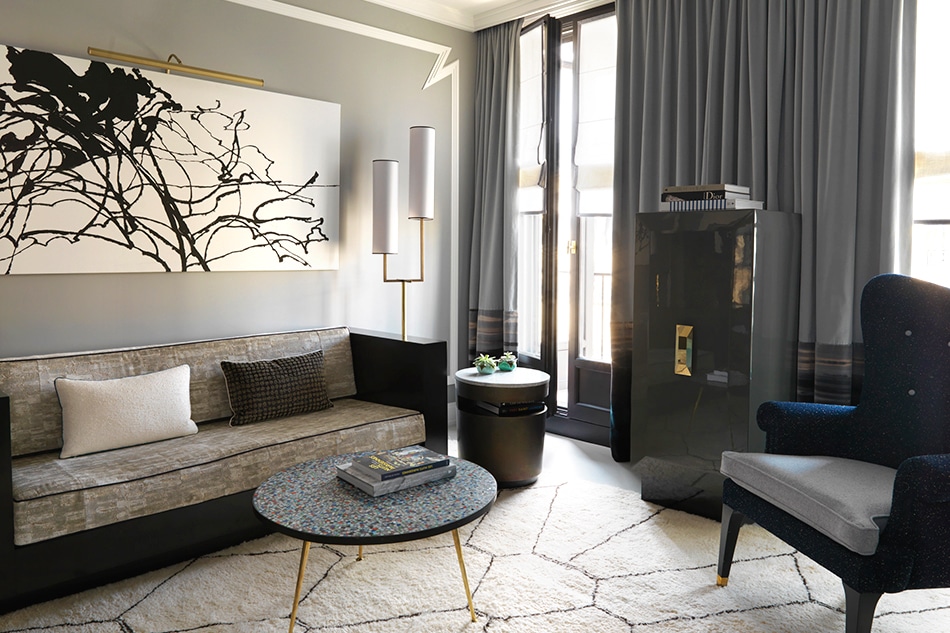 “In the rooms,” says Deniot, “a mix of seating shapes and forms … offer a panorama of eras, styles and tastes, ensuring an unexpected but harmonious encounter of genres.” 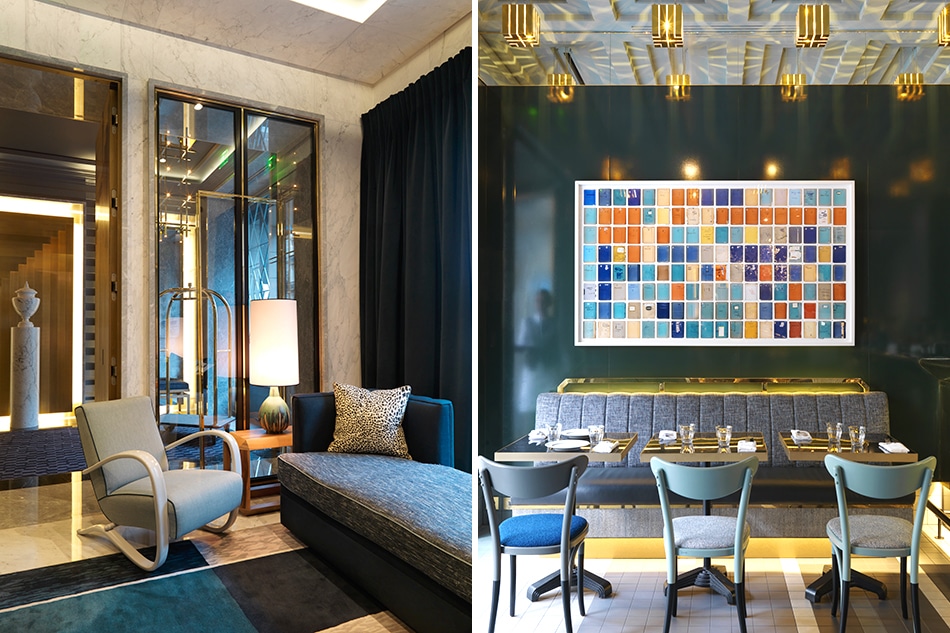 Left: The furnishings in the reception area wouldn’t be out of place in a high-end Parisian home. Right: Deniot dipped the legs of classic bistro chairs in black lacquer to provide contrast with the pastel hues he used on the rest of the frames. 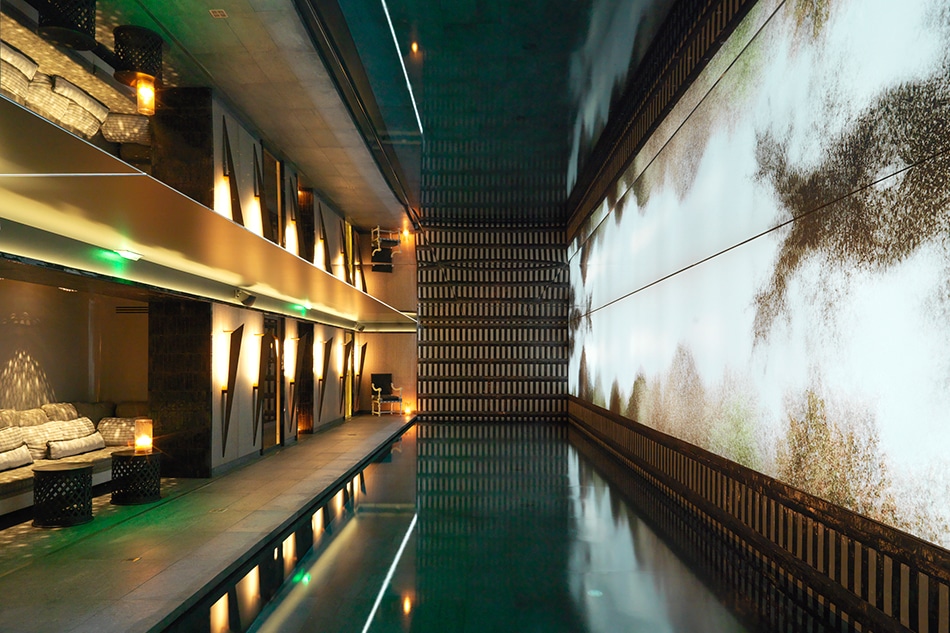 Blown-up, backlit, highly abstracted images of countryside scenes line one wall of the subterranean pool area. Deniot added a mirrored ceiling above to create a double-height effect intended to mitigate any feelings of claustrophobia. 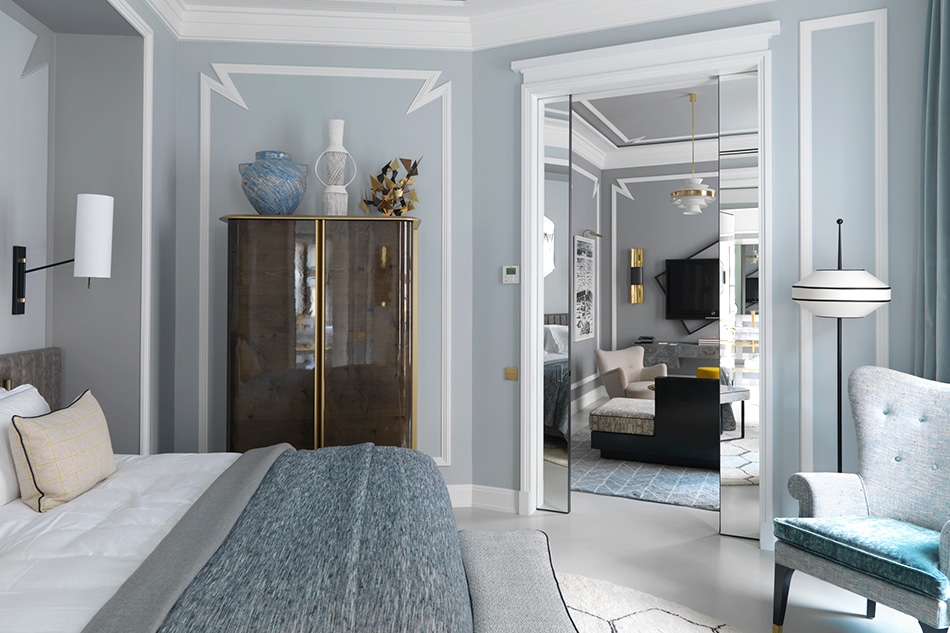 The guest rooms, like the whole of the hotel, mix eras and aesthetics, from Louis XVI to mid-century modern, Art Deco to contemporary 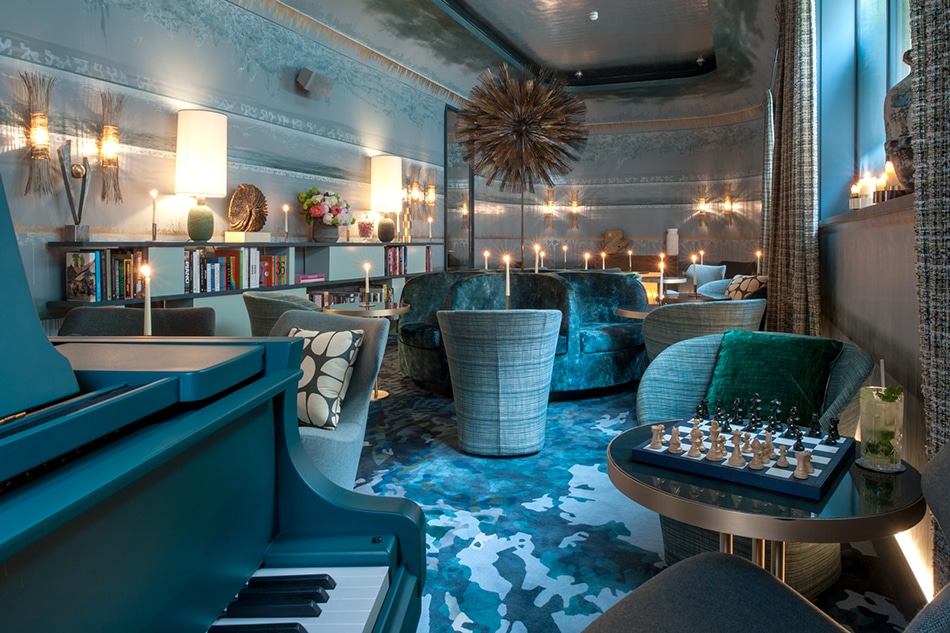 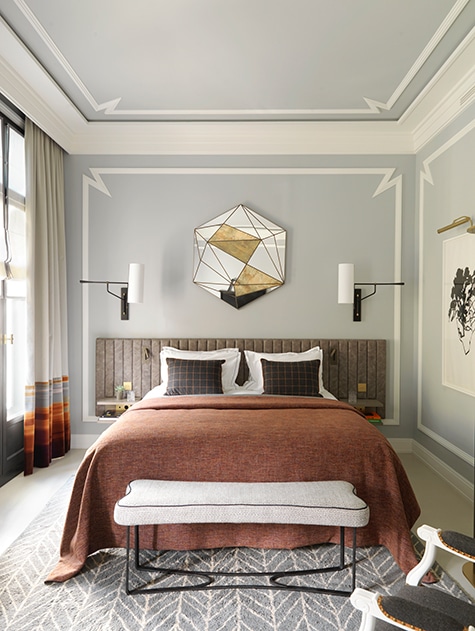 Deniot replaced existing wood floors and carpeting with cement slabs. On top of these, he put shaggy rugs whose pattern references the herringbone floors typical of French homes. In a related touch, the classical molding on the walls features an unexpected geometric motif in the corners.

Each specific area has a slightly different palette and unique elements to discover. The lobby’s green-and-white marble suggests a stately and spare entrance hall. One of the vestibules features a custom-painted abstract ceiling pattern, which has been identically mirrored on the laser-printed wall-to-wall carpet. The Grand Salon has a custom rug made with more than forty colors and an abstract painted wall that refers to French seventeenth-century panoramic scenes. In the brasserie, I used typical French materials — including ceramic tiles for the floor and painted canvas on the wall, oak for the chairs, brass in the ceiling lights and tables and eglomise glass for the mirrors.

In the guest rooms we used traditional French paneling with a geometric profile as an accent. We replaced wall-to-wall carpet or wood floors with cement slabs, placing on top of them shaggy rugs that carry the herringbone wood-floor pattern to reference another typically French component.

I believe that eclecticism is the basis of convivial decoration, allowing a room to give an impression of spontaneity and naturalness. The ambience of the dining room, for example, owes much to its mix of mid-century furniture from Italy, France and the United States. In the lobby, I placed a sofa inspired by a Californian piece from the 1950s next to chairs by the Czech designer Jindřich Halabala from the 1930s.

As for the Grand Salon, it mixes very contemporary seating with a double sofa whose design refers to a very famous piece by Mies van der Rohe. 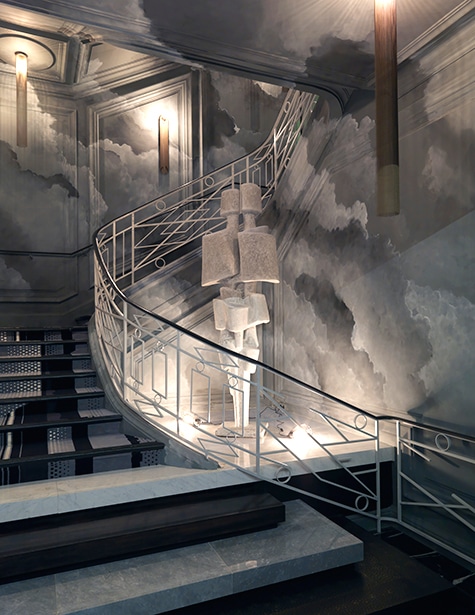 “The mural makes the original architecture all but disappear, opening up the confined space into something that feels limitless and boundless,” Deniot says of the Mathias Kiss painting he commissioned for the walls of the staircase. Inspired by stormy Parisian skies, the mural, Deniot continues, is “a poetic way to bring guests up to their private quarters.”

In the rooms, a mix of seating shapes and forms — some from the Louis XVI period, others, like a little round Sputnik pouf, from much later — offers a panorama of eras, styles and tastes, ensuring an unexpected but harmonious encounter of genres.

I am in love with the bronze-panel doors in the entry hall, which connects to the lobby and reception area, the central stairs and the Grand Salon. The patinated panels look like woven bronze.

The stormy-sky mural painted by artist Mathias Kiss in the stair hall. I really enjoy the juxtaposition of Kiss’s abstract treatment on top of the original building’s rather academic 19th-century design. It loosens up the formal structure. The mural makes the original architecture all but disappear, opening up the confined space into something that feels limitless and boundless. It’s a poetic way to bring guests up to their private quarters.

I finished the seating area of each suite with a one-of-a-kind vintage piece — an armchair, a console, a cocktail table, a lamp. Doing so adds a unique, one-of-a-kind element to every suite. 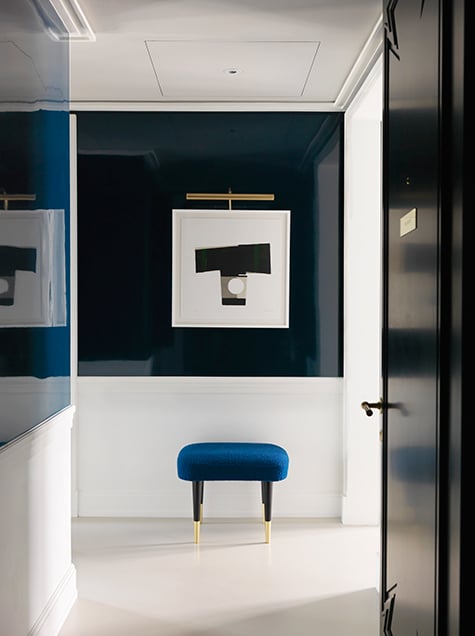 “We used mostly polished finishes, such as bronze and high-gloss panels, and lots of decorative painting hand rendered by artists,” explains Deniot. “We displayed those finishes to create an effect of surprise.”

In terms of art, it’s the wall sculpture above the front desk, Clouds of Bronze by Silas Seandel — which I found through 1stdibs. It holds pride of place.

I favor the rooms and suites on the building’s second floor, where the ceilings are at their highest, something typical of classic Parisian buildings. I really enjoy medium-sized rooms with the tallest ceiling possible. It gives that instant palatial feeling.

Each room has an elaborate illumination system that’s meant to emphasize a private, residential feeling. There’s no typical overhead recessed hotel lighting here but instead floor lamps, picture lights, articulated wall lamps and strips of light under the bed and in the crown molding to show off the velvet drapes.

In addition, I placed sculptures and ceramics on the rooms’ armoires, which I designed as traveling trunks, giving the impression that the pieces displayed on top came straight to Paris as souvenirs gathered on trips to South Africa, Greece and Japan, just as they might have in a private home rather than a hotel.

Channel the Nolinski’s look with items hand-picked by Jean-Louis Deniot. 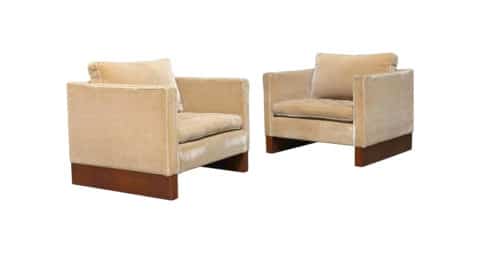 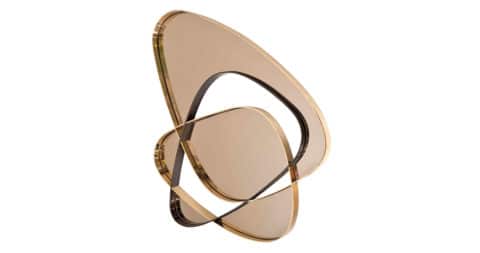 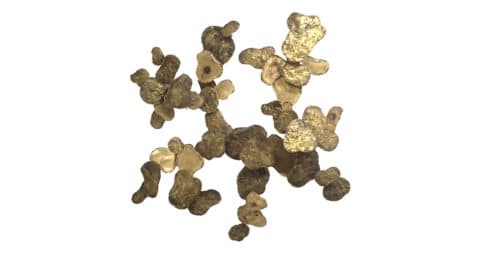 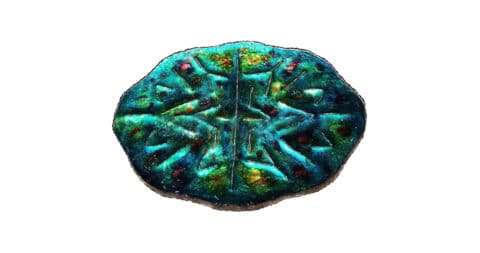 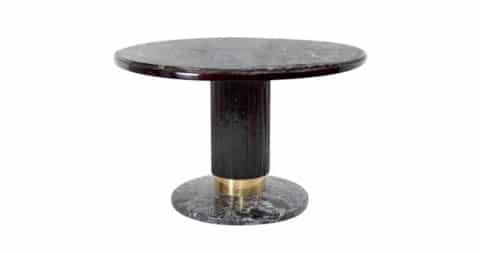 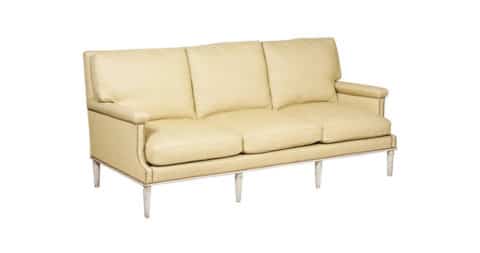 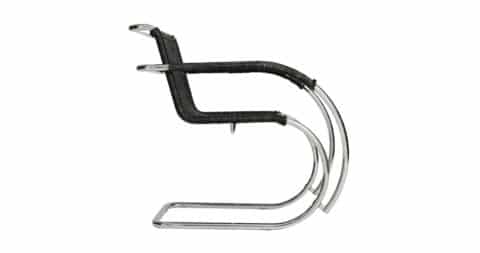 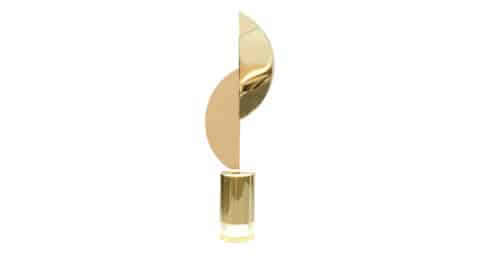