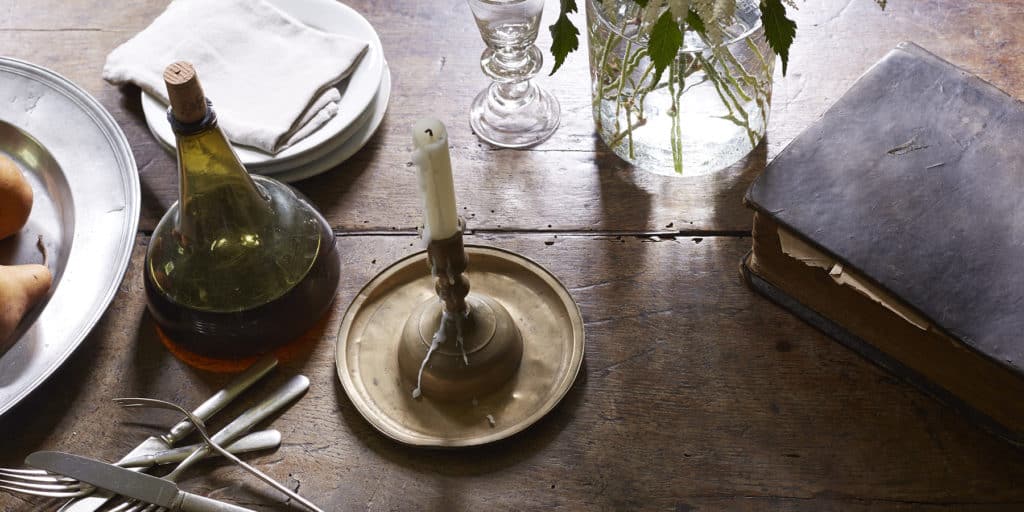 Anchored every year by the Winter Antiques Show in New York City, January is the time that collectors get particularly excited about American antiques. See how utilitarian colonial-era furniture is sculptural and can seem almost modern in a storybook Connecticut cottage. 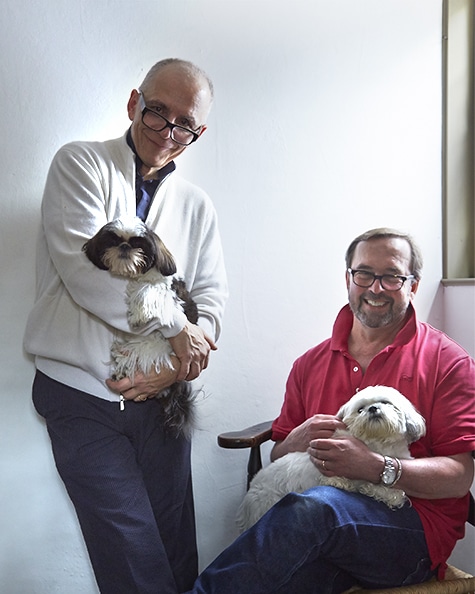 January 16, 2017Interior designer Robert Couturier (left) and his husband, Jeffrey Morgan — seen here with their dogs — have added a circa 1710 home to their estate in Connecticut’s Litchfield County, which they’ve dubbed Dover House and filled with artifacts true to its early-18th-century origins in Upstate New York. All photos by Stephen Johnson

Two decades ago, when legendary Manhattan-based interior designer Robert Couturier, a native Parisian, met his now-husband, the Connecticut-born historic preservationist Jeffrey Morgan, their tastes were poles apart. “I didn’t know much about American decorative arts,” says Couturier, famed for creating grand-scale, lavishly decorated interiors on four continents. “Jeffrey said he wanted to show me some 18th-century paneling, which to me meant something gilded and carved.” Instead, Couturier recalls, Morgan brought out “a plank of wood with bits of paint on it.”

Coming from Europe, where America’s early-furniture patrimony “is disdained as excessively simple,” as Couturier puts it, he was a bit taken aback. “It comes from a different world, different way of thinking, different everything.”

Although Couturier’s taste today still leans toward the French, formal and sumptuous while Morgan likes his antiques local, simple and austere, each man has come to appreciate the other’s aesthetic, and they’ve resolved any decorating differences by having more than one house on their 16-acre property in the scenic Litchfield County, Connecticut, town of Kent: a neoclassical-style residence, which they built in 2002, with decor masterminded by Couturier, and a pair of rustic 18th-century cottages furnished mostly by Morgan. 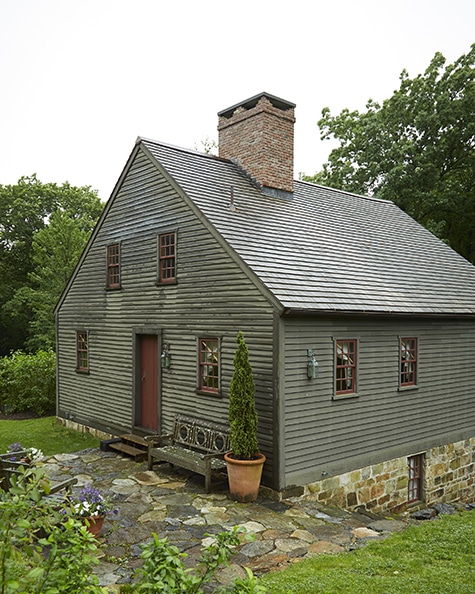 “It was a rescue house,”  Morgan says of Dover House. He found the building in New York’s Dutchess County, where it had been gradually falling into a state of ruin. It now serves a guesthouse.

Their latest acquisition is a circa 1710 pitched-roof cape-style building they call Dover House, which they moved from its original spot in New York’s Dutchess County after Morgan discovered it gradually falling into ruin. “It was a rescue house,” he says. Following a painstaking restoration, it’s now a serene retreat for the couple and the occasional guest, as well as a showcase of museum-quality early American furniture, some pieces three centuries old, from New York State. “I’m a purist,” Morgan says. “I was a complete New England snob before, but I figured that since I’ve got a New York house, it was time to delve into New York State furniture.”

For his part, Couturier says he finds such informal, country-made Colonial American furniture interesting to incorporate into homes of other styles and periods, “very sparingly, as a piece of art.” He states, however, that in a setting like Dover House — where soft light entering through the small-paned windows gently illuminates beamed ceilings, whitewashed walls and wide-plank floors — the collection of wooden pieces look “appropriate and absolutely beautiful.”

Good news for today’s collector: The market for early American furniture, which has at times been hot, is “a little soft these days,” Morgan says.

“It’s not a bad time to buy, and you can do it without spending your retirement funds.” 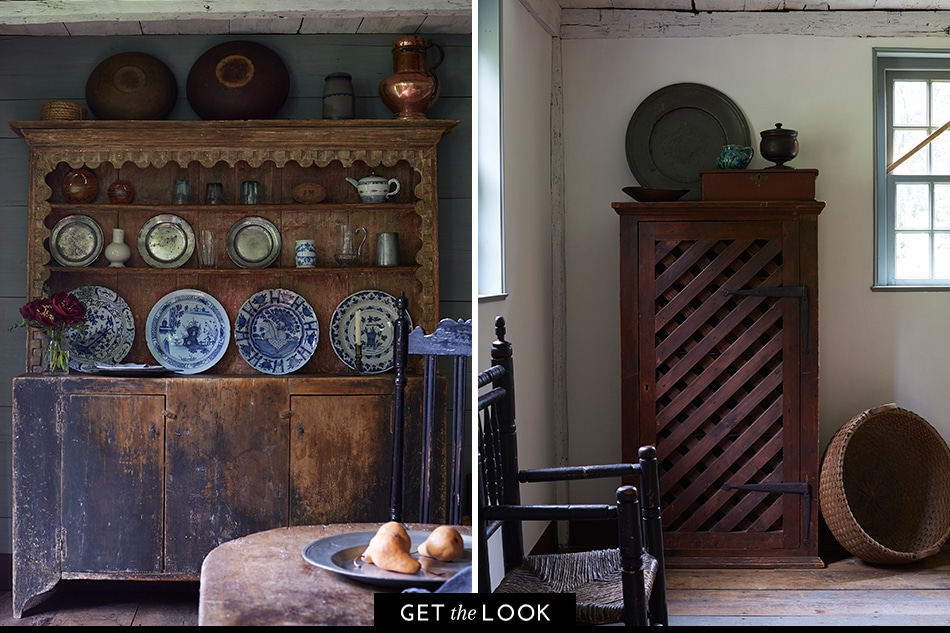 Left: One of several exemplary pieces of early-American furniture at Dover House is a cupboard that would have been called a dresser or a pewter, since a lot of plates were made of pewter and were likely stored in such a thing. It was made in Upstate New York’s Mohawk Valley in the 1760s, and Morgan scraped off later coats of paint to reveal small traces of the original blue and red. Right: The Hudson Valley food-storage cupboard with unusual crosshatching is in “one hundred percent original condition,” says Morgan — never painted and with all its original hardware. The only thing missing is the linen panel that would have been tacked inside the door to keep flies out. 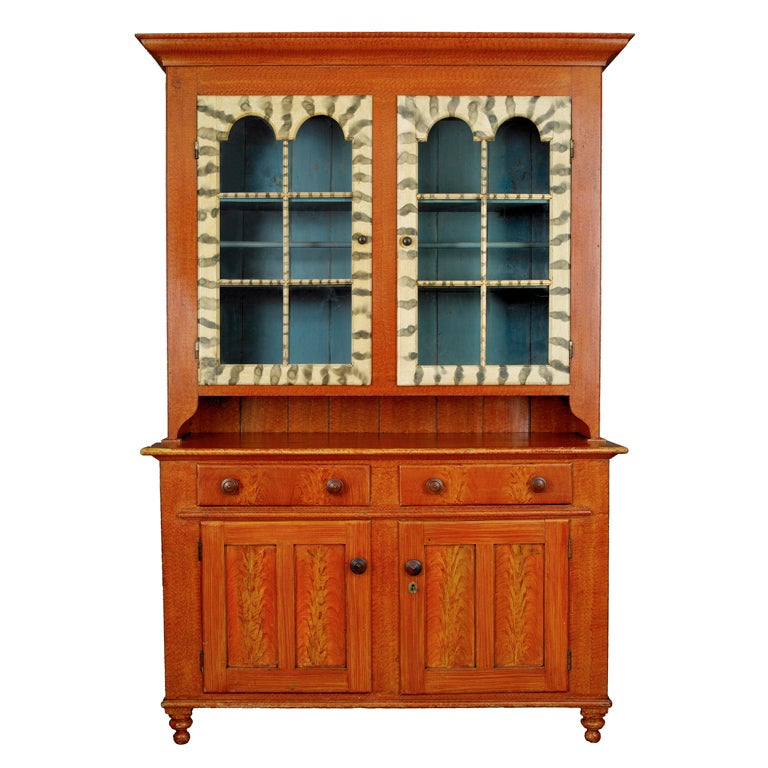 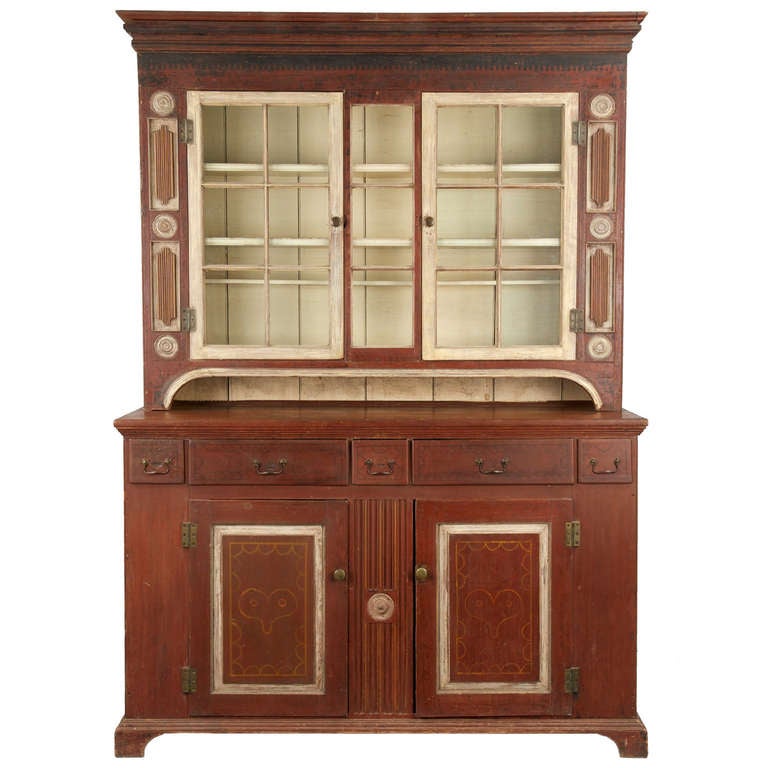 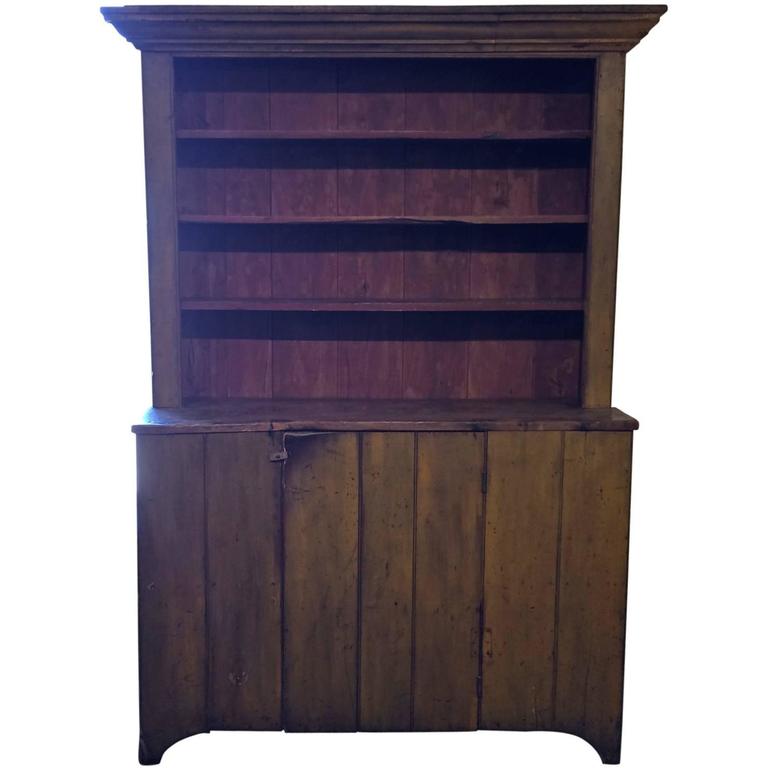 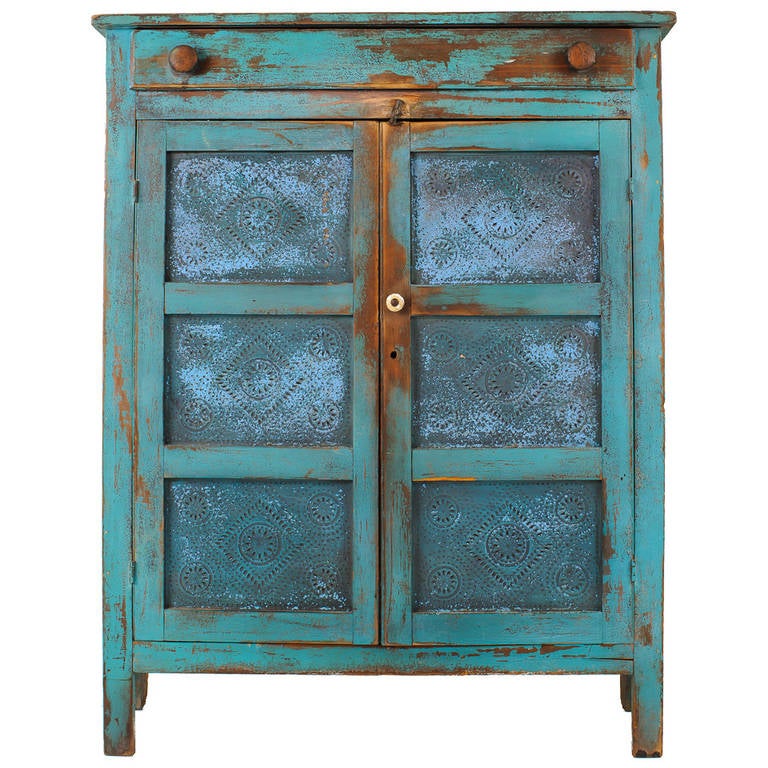 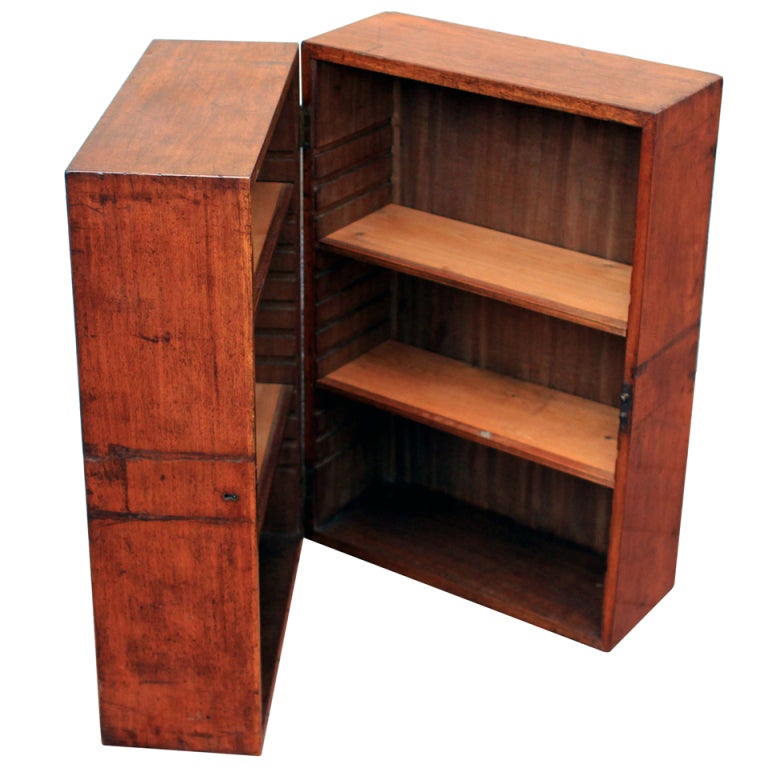 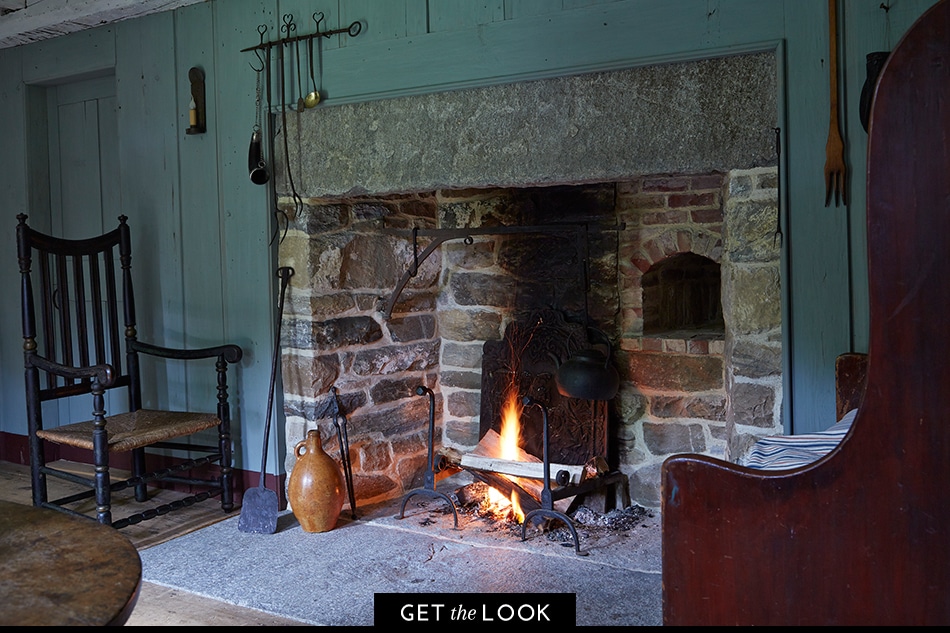 The yoke-top armchair with reeded banisters is a “really nice Hudson Valley form,” Morgan says, noting that this particular piece was made near New Rochelle in the 1720s and is in totally original condition “except for slightly later paint over the original green.” Opposite the armchair, on the other side of the fireplace, is a high-backed settle with raised panels on both front and back, also from New York State and pre-Revolutionary. 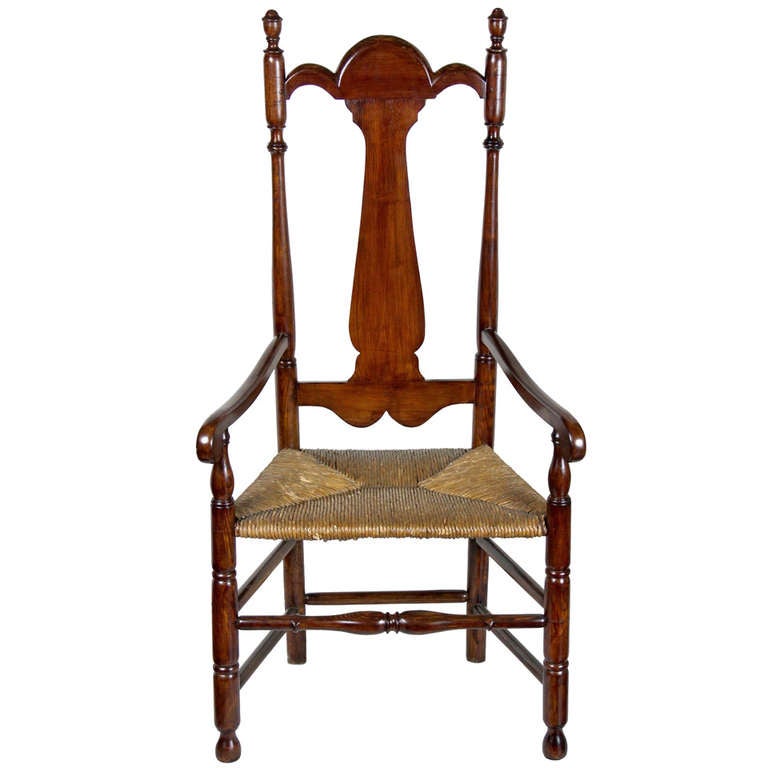 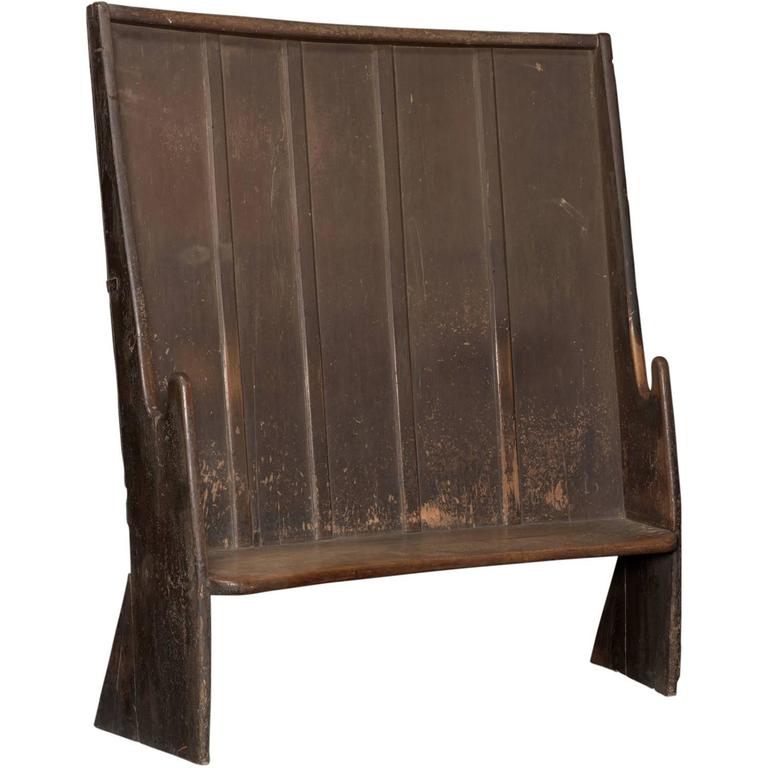 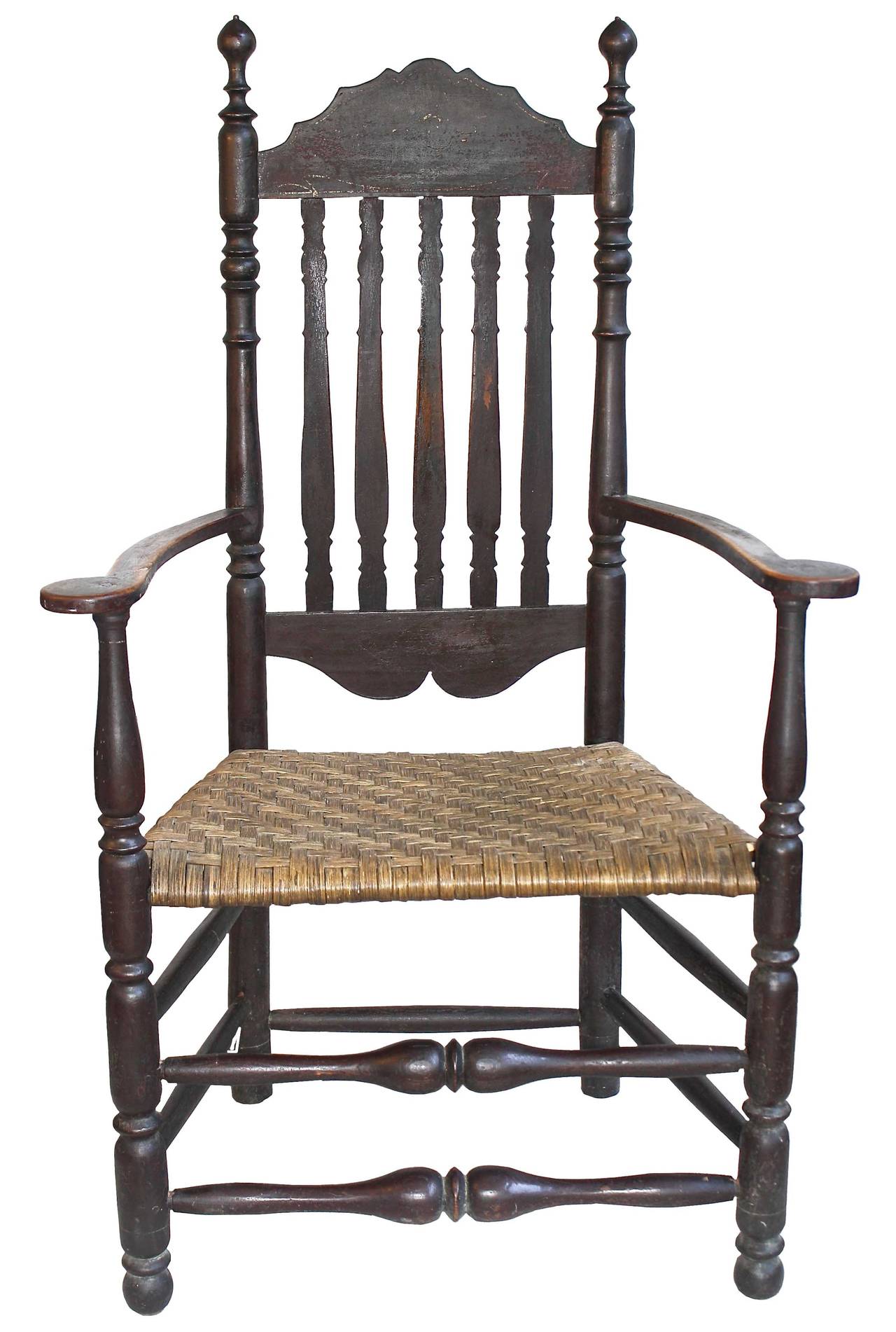 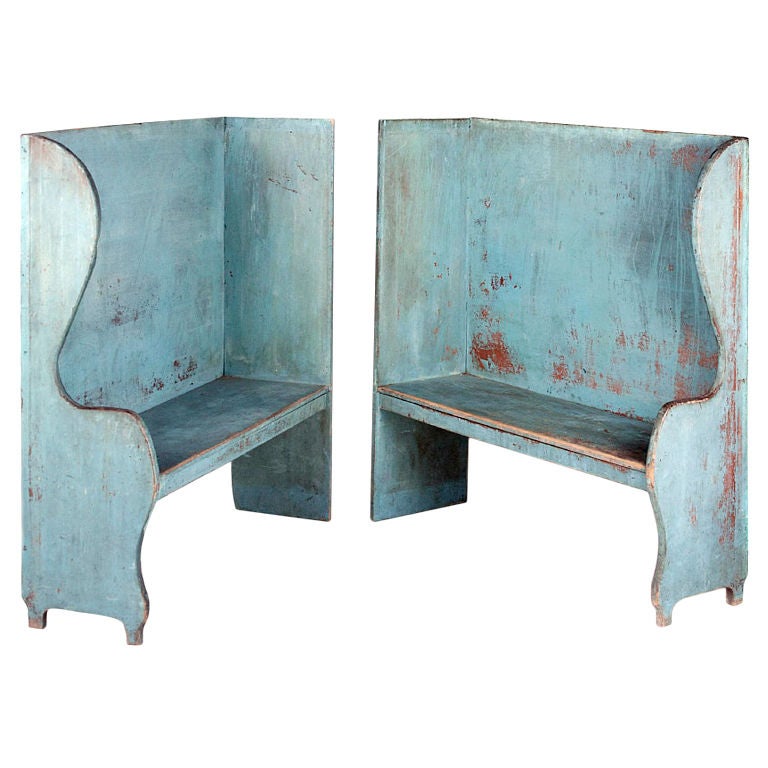 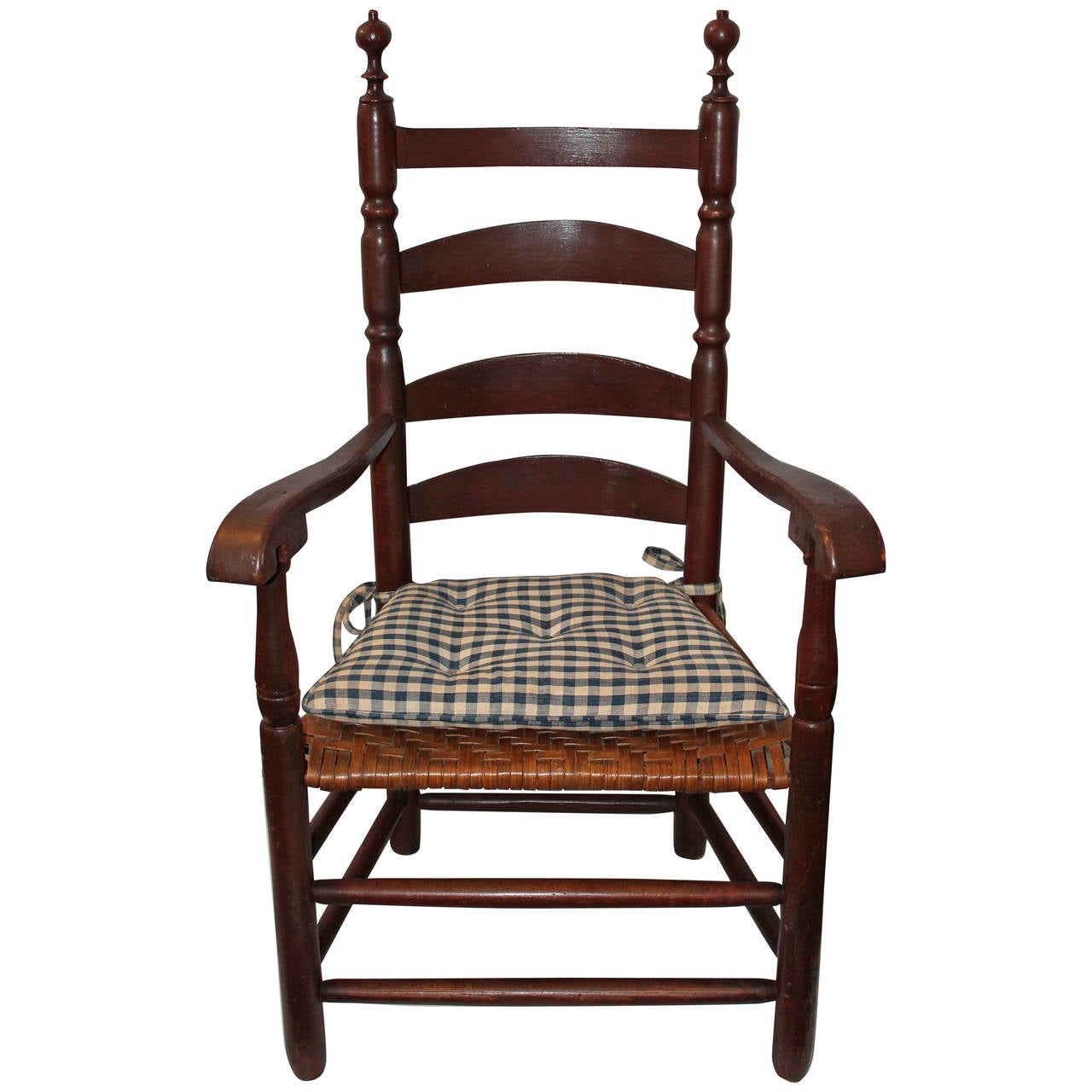 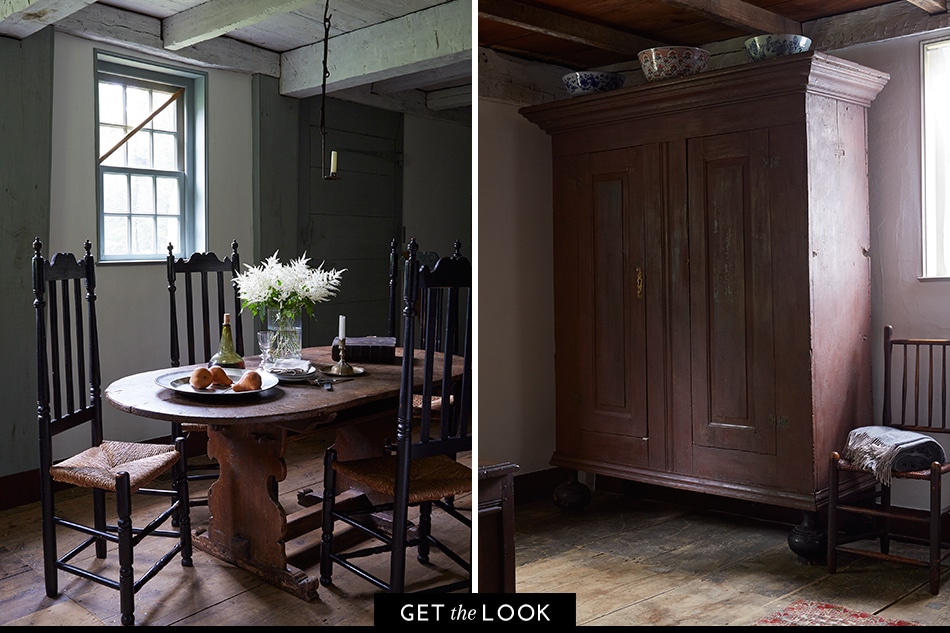 Left: These lower Hudson Valley dining chairs, from the 1760s or ’70s, have an “interesting crest and really good finials,” Morgan says. The trestle-base dining table is Dutch and dates back to 1670, around the time it was brought to the U.S. from Leiden. Right: The monumental pine kas (Dutch for armoire) with turned maple feet was probably made in New York’s Ulster County in the very early 18th century. The red color is a second coat of paint applied over a teal blue layer that shows through just a tad. “Surface condition is extremely important” in early American country furniture, Morgan says. “It even takes precedence over form.” 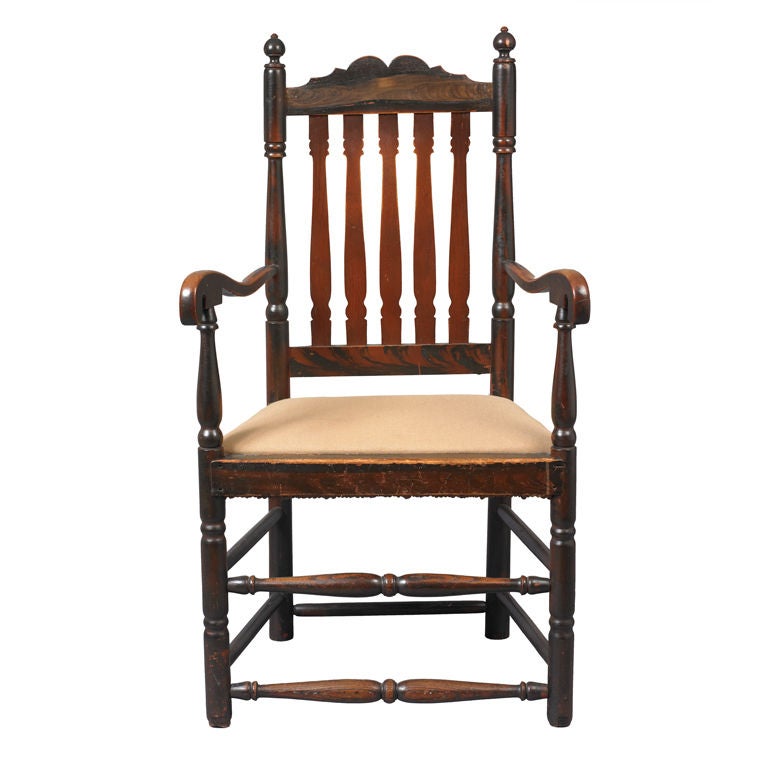 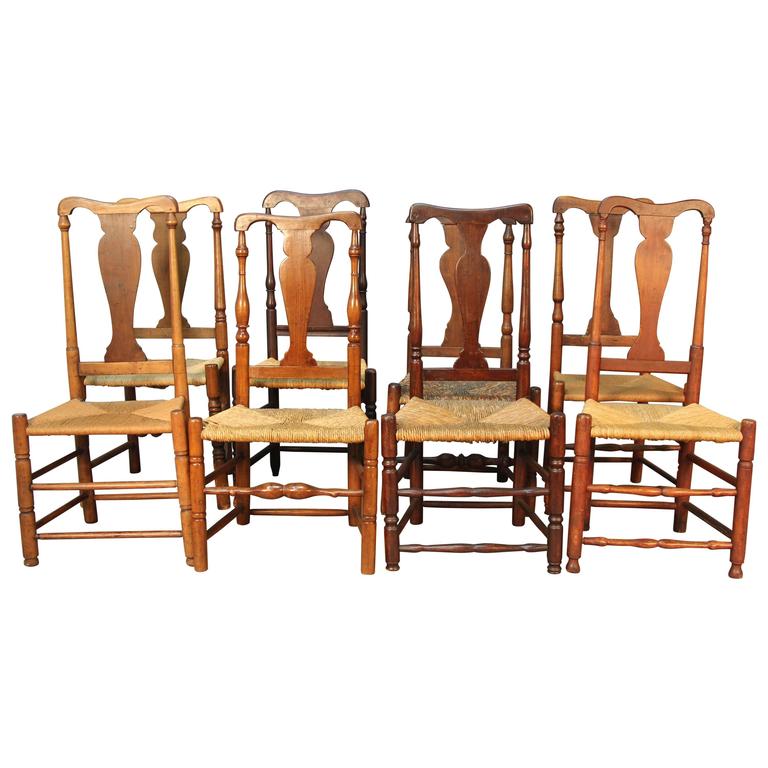 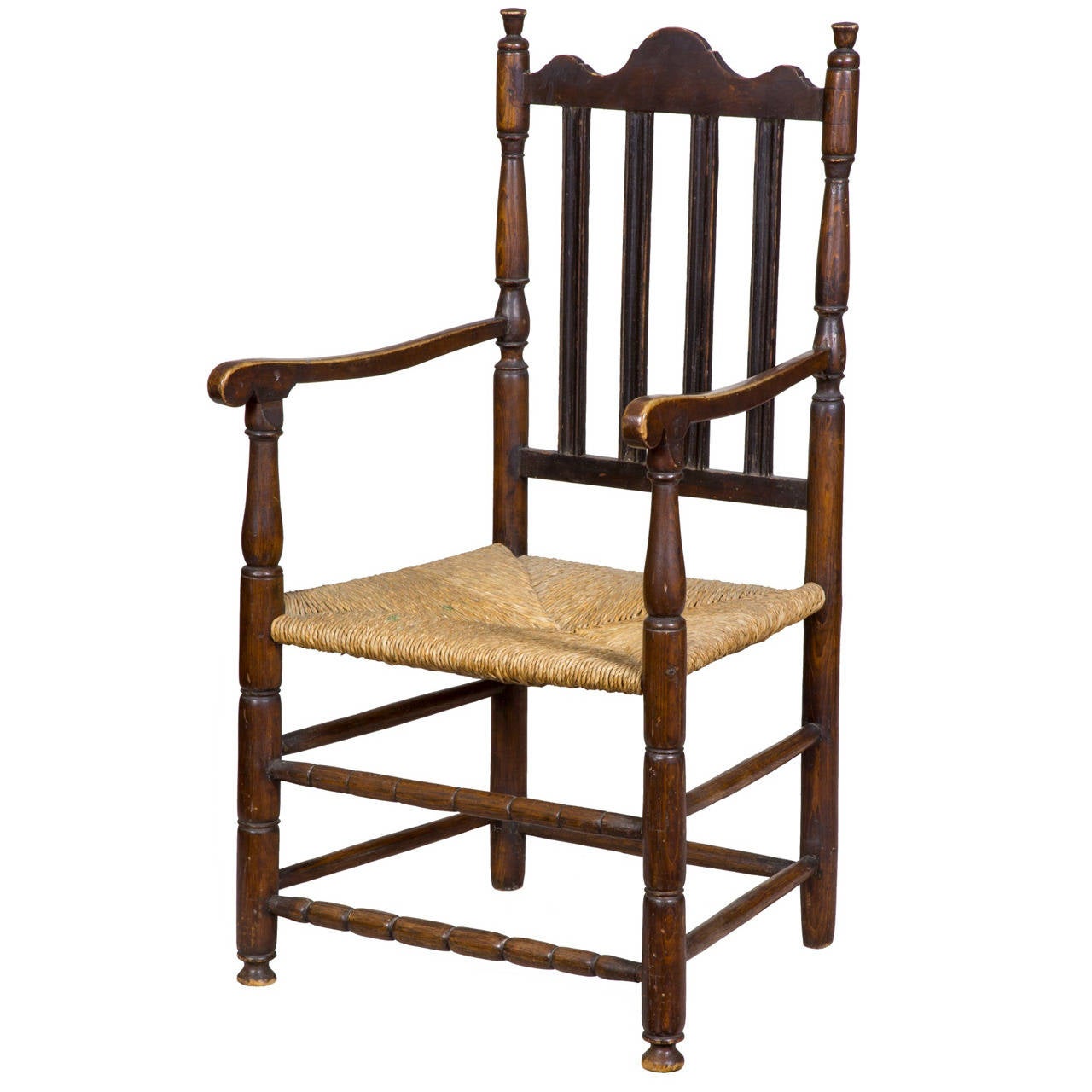 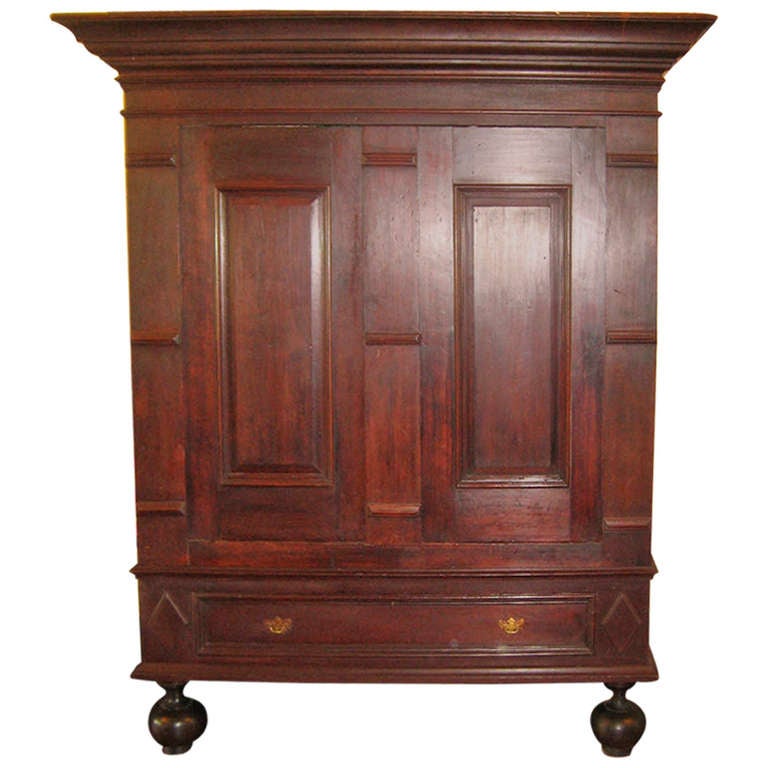 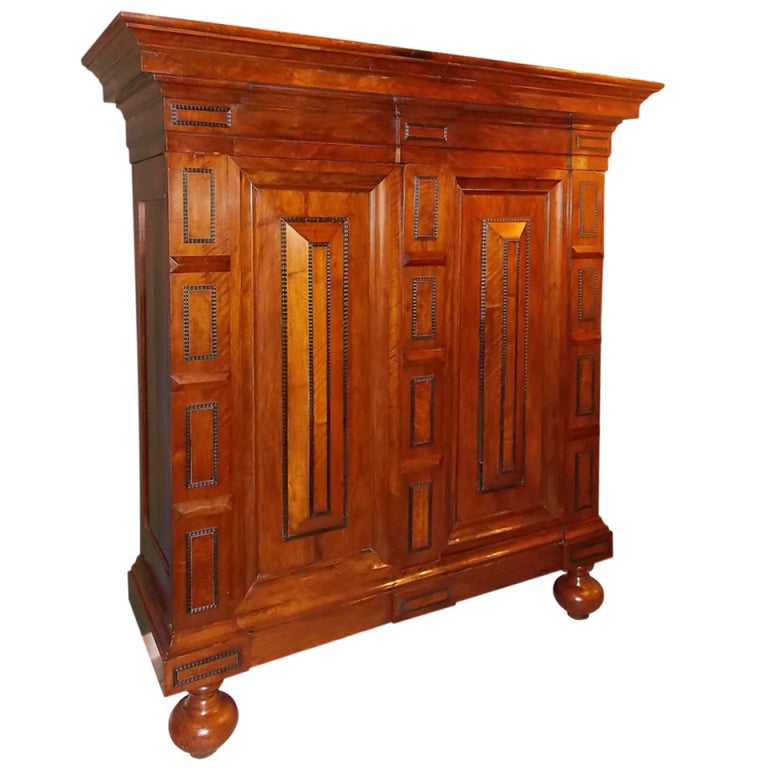 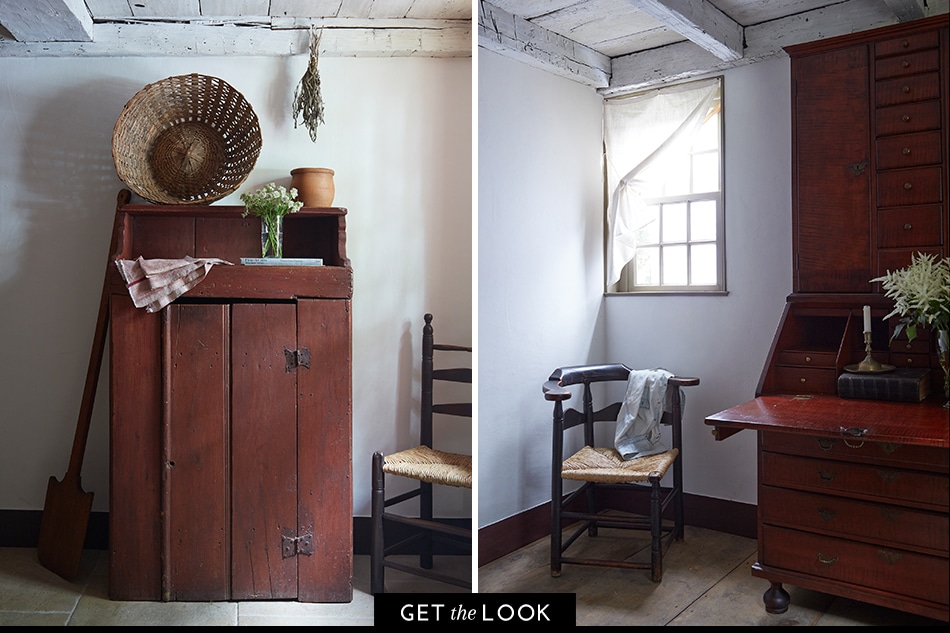 Left: What Morgan calls a “funny little red cupboard” — with a cutout shelf on top, shadow molding and great big butterfly hinges — is a real oldie, probably crafted before 1700. He found it in a shop on the New York–Massachusetts border. Right: The circa 1730s curly maple secretary is a little more formal than most pieces in Dover House and its provenance is less clear. It was made either in New York State or near the Connecticut–Rhode Island border, Morgan says. 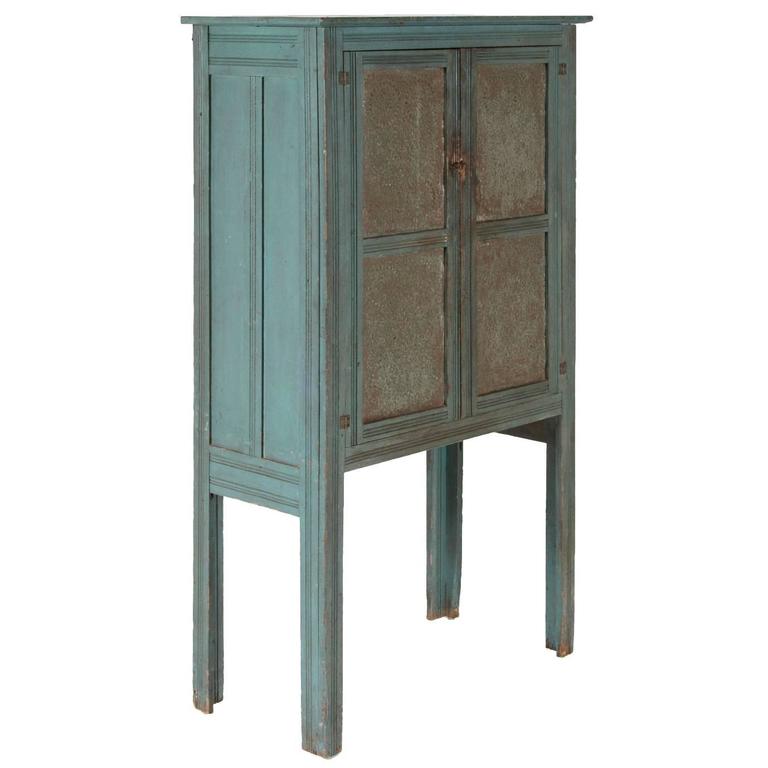 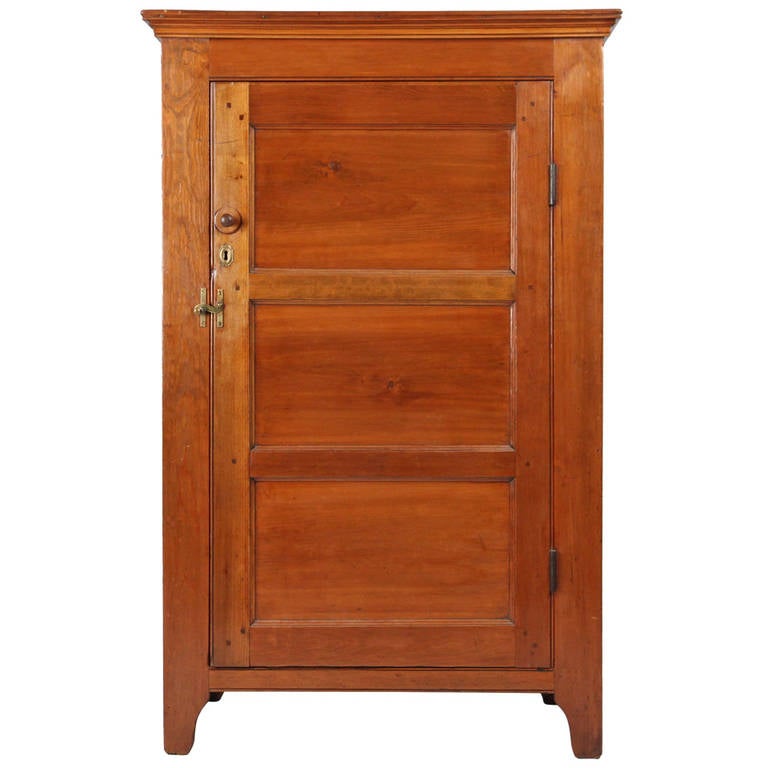 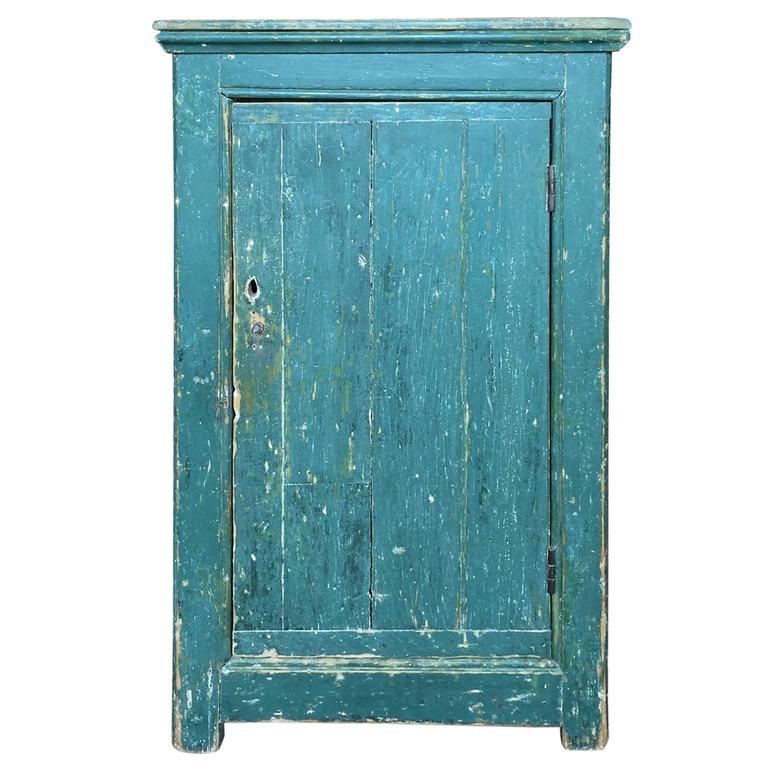 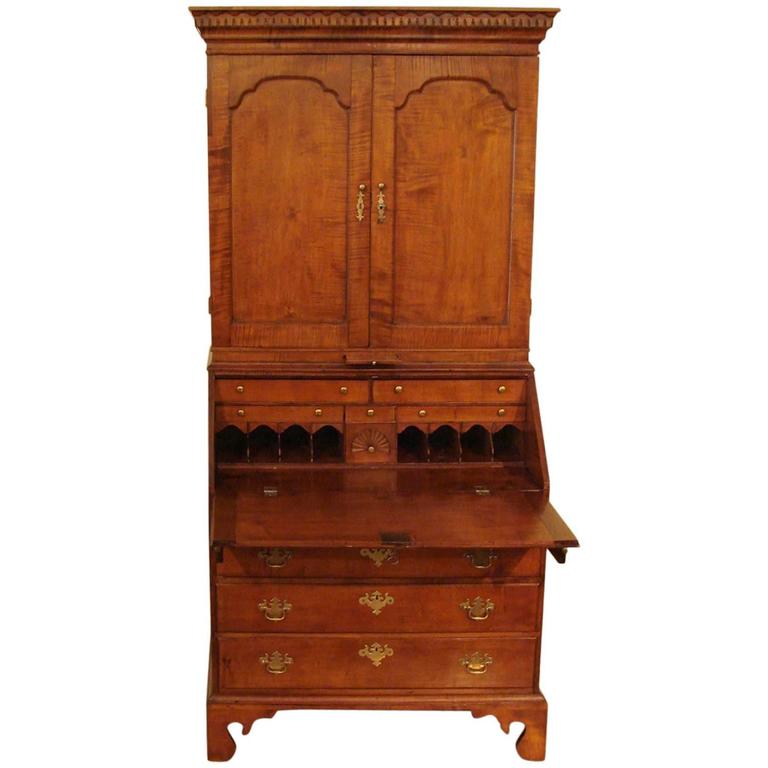 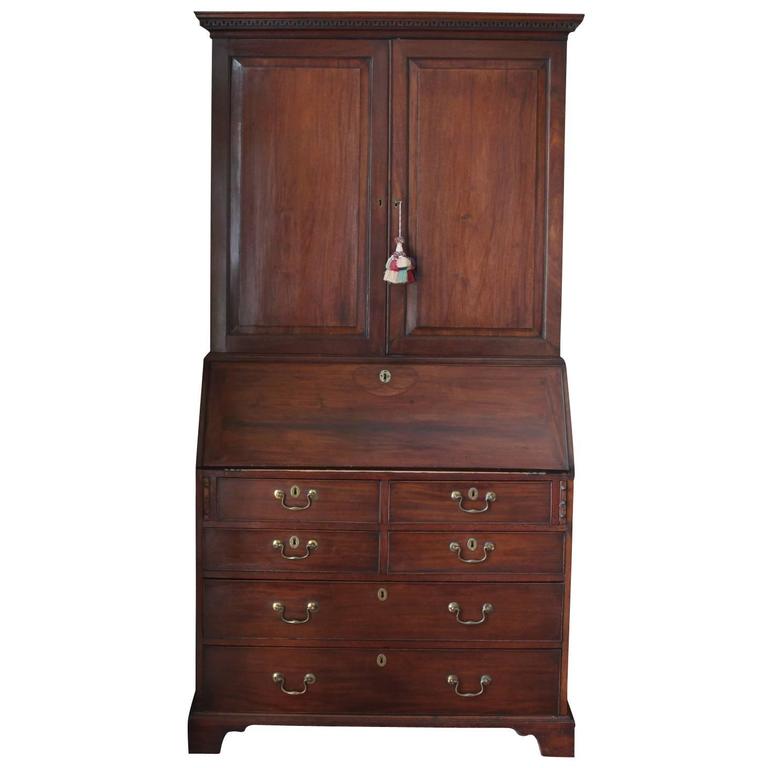