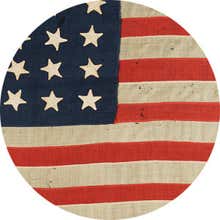 Though the pieces are timeless, folk art emerged as a collecting genre only in the 1920s. Then as now, collectors focused on American artifacts. The earliest were prompted in part by the awareness of a nation changed: in that decade, for the first time the majority of U.S. citizens lived in cities, rather than on farms and in small towns. At the same time, the ascendance of modernism in art and design was countered by promoters of the Colonial Revival style. That movement drew from attics and barns old hand-carved furniture, stilted 19th-century family portraits, weathervanes and butter churns.

The best folk art items were purchased by an odd mix that included bohemians and intellectuals, along with J.P. Morgan and members of the Chrysler and Rockefeller families (who began funding, for instance, the restoration of Colonial Williamsburg in Virginia in the 1920s). If nostalgia played a role, the primary motivation for folk art collectors was — as it is today — a recognition of the artistic merit and cultural significance of pure, honest expressions of the human impulse toward beauty.

Simplicity is its hallmark, yet folk art defies a simple definition — and covers a vast amount of ground. Folk art has been called "the art of the everyday": objects created by people, with no formal training in the arts, for use in their daily lives. These include everything from tools and toys to quilts, baskets, jugs, dowry chests and duck decoys. Folk art is generally made by hand; works might be carved, sewn, chiseled, knitted, hammered, woven or embroidered and more. Such techniques were passed down through the generations — one reason folk-art collecting has been described as "a kind of archaeology." Folk art reveals the inherent values and traditions of a community, through time-honored crafts, decorative motifs and pictorial subject matter.

All folk art intrinsically reflects a sense of pride. "Americana" is folk art that does so overtly:  through work that honors civic ideals and celebrates national and local achievements. Americana includes flags, bunting, carved bald eagles, and needlework with allegorical figures representing Liberty and Democracy; or helmets and buckets used by a volunteer fire brigade; or the trappings of fraternal organizations such as the Oddfellows. Collectors of Americana typically also collect American antique furniture that, while made in the workshops of a master cabinetmaker or joiner, reflects regional stylistic traits, tastes and quirks.

Almost all folk art is anonymous — and the prominent exception being signed work by early 19th-century itinerant portrait artists like the New Englander Ammi Phillips, whose 1835 portrait of a young girl and her pets was the first piece of folk art to sell for $1 million at auction. Until relatively recently, work by Phillips and his ilk was the prime focus of folk art collectors: the folk art of the Northeast defined the category. But recently, more attention and more scholarship have been devoted to the folk art of other regions: to the South, and the artwork of enslaved African Americans and their descendants; and to the Southwestern and early Latino folk art. Born in a time of change, folk art collecting is changing along with the nation.

Rare Patriotic Presidential Applique Quilt from 1925
Located in Los Angeles, CA
This is such a fine example of Americana at its best. This fantastic applique quilt has the profile of George Washington and Abe Lincoln along with the Uncle Sam hat and the Patrioti...
Category

American Federal Period Cast Iron Eagle
Located in York County, PA
This cast iron eagle is one of the earliest sculptural forms that one will encounter in the marketplace. It is also one of the most attractive and iconic depictions of what some Amer...
Category

Pennsylvania Backgammon Board, Signed "Wise"
Located in York County, PA
PENNSYLVANIA BACKGAMMON BOARD, SIGNED "WISE" WITH IMAGES OF A WAGON WHEEL AND A STAR OF DAVID, 1850-1880 Found near the town of Milford, in the northeast corner of Pennsylvania, is...
Category

Mariner's Compass Quilt with Swag and Bow Border
Located in Darnestown, MD
Elegant version of the always desirable Mariner's Compass quilt pattern. It is an extremely difficult pattern to execute with the numerous fine points and this is particularly well d...
Category

Rare George Hunzinger Rocking Chair with Patented Steel Webbing, 1869
By George Hunzinger
Located in Bridgeport, CT
Fine form and condition, with one broken strap and geometric moulding at upper right missing. The back with the wire webbing flanked by bamboo form frame, and bold swirled arms with ...
Category

American Empire Side Table with Writing Surface in Mahogany, circa 1825
Located in Miami, FL
A fine Empire work table in mahogany on foliate-carved, baluster-turned pedestal resting on quatre-form base and terminating with winged carved lions' paw feet. Top opens to baize-li...
Category

American Empire Side Table with Writing Surface in Mahogany, circa 1825

Patriotic Crib Quilt
Located in Darnestown, MD
The construction of this Patriotic Crib Quilt is as unusual as the combination of motifs. Each of the black background areas is actually made of thin strips of satin (about 1/4" wid...
Category

Early 19th Century Original Surface Child's Chair
Located in Los Angeles, CA
This amazing untouched surface is to beat the band. It was found in New England & the chair is in great condition and has wonderful form. It has been well love and used.The wear is...
Category

Monumental Overmantel or Pier Mirror in the Aesthetic Taste
Located in New York, NY
American, third quarter of the 19th century. Pine, gessoed and gilded, with mirror plate. Measures: 81 ½ in. high, 59 ½ in. wide. Condition: Excellent. The gilding has been cle...
Category

Monumental Overmantel or Pier Mirror in the Aesthetic Taste

Caesar's Crown Quilt
Located in Darnestown, MD
Beautifully quilted version of a Caesar's Crown quilt. The diamond shapes of the border are repeated in each crown block, making for a nice interplay between the two. It is also inte...
Category

Rufus Porter Mural from New Hampshire Tavern
By Rufus Porter
Located in Milford, NH
Mural by Rufus Porter from Prescott Tavern in East Jaffrey, New Hampshire, circa 1824. This panel was removed from the tavern prior to its being torn down in 1950. This mural hung in...
Category

Pair of Heartback Hepplewhite Chairs
Located in Asheville, NC
This stunning pair of heartback Hepplewhite mahogany chairs were created during the American Federal period, and popular throughout the eastern seaboard to the Carolinas from 1780 -1...
Category

Economy Patch Quilt
Located in Darnestown, MD
Squares within squares such as this are called an Economy Patch quilt pattern. It is made of a terrific combination of late 19th century printed fabrics. Consistent use of yellow squ...
Category

LeMoyne Stars and Maple Leaves Quilt
Located in Darnestown, MD
This is an early and unusual quilt combining LeMoyne Stars and Tulip patterns. It is made with a wonderful array of early 19th century fabrics. The tan sashing was the perfect color...
Category

American (New Hampshire) Carved Eagle
Located in Natchez, MS
New Hampshire Eagle carved from Tulip Poplar with gilt and paint decoration. This by oral tradition came from a New Hampshire courthouse from the center of the broken pediment in the...
Category

Pair of American Neo-Classical Pier Mirrors
By Historic New England
Located in New York, NY
Boston, Massachusetts, about 1820 Eastern white pine, gessoed and gilded, with ebonized liners and mirror Each, 65 1/8 in. high; 37 1/2 in. wide Inscribed (on back of frame and ba...
Category

Pier Mirror in the Neoclassical Taste

Cotton Crazy Quilt
Located in Darnestown, MD
This Cotton Crazy Quilt is truly a collage of fabrics. The center has the structure of a Nine Patch within a Diamond in a Square. This unusual touch pulls in your eye before wanderin...
Category