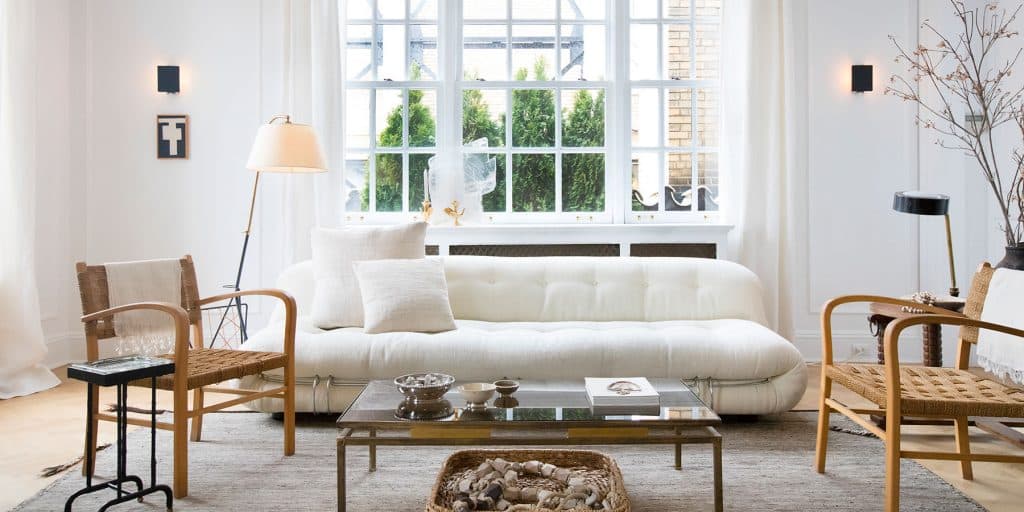 The designer may be best known for transforming homes on reality TV, but his passion lies in creating highly personal, livable interiors. 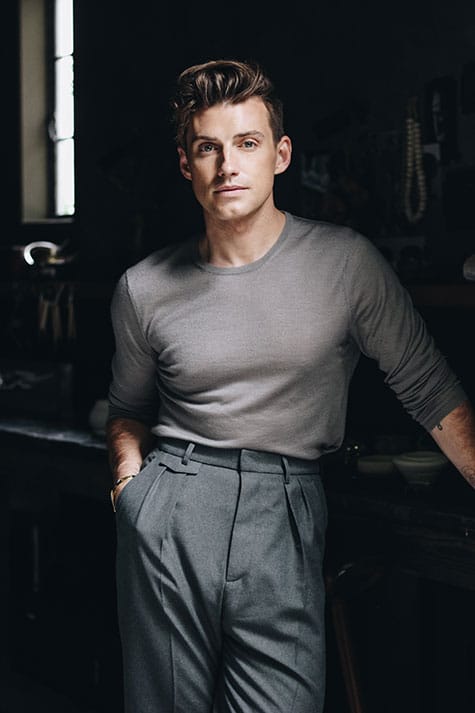 I’ve probably cried seventeen times today,” Jeremiah Brent remarks on a recent Friday afternoon. Although perhaps prone to hyperbole, the designer and self-described “spontaneous crier” has more reason than usual to be emotional, as it’s his daughter’s third birthday. She was his first child with his husband, the equally telegenic designer Nate Berkus — son Oskar was born in March — and with a name like Poppy Brent-Berkus, she seems destined to be a decorator.

Brent and Berkus married in a lavish 2014 celebration at the New York Public Library — the first same-sex couple to do so — and since then have cemented their status as an industry power couple. In addition to thriving solo careers (Brent has offices in New York and Los Angeles, and Berkus’s firm is headquartered in Chicago), they have a popular home-makeover show, “Nate and Jeremiah by Design,” whose second season recently wrapped up on TLC.

On the show, Brent and Berkus help homeowners complete renovation projects that, for reasons ranging from debilitating health issues to ill-conceived DIY attempts, have become financially and physically impossible for them to complete. In one of the first season’s episodes, Brent and Berkus come to the aid of a newlywed couple who tore apart the walls and floors of their bungalow seeking a more open-concept style. The problem was, neither their construction skills nor their budget matched their zeal for demolition. “Everyone likes to buy a sledgehammer, but no one can buy a tape measure,” Brent quips.

Of course, he recognizes that the wildly accelerated timelines and instant gratification of a home transformation on TV are nearly impossible to replicate in real life. “There are a gazillion people working behind the scenes,” he says. Not that the realities of reality TV came as a surprise to Brent, who is something of a small-screen veteran by now, having appeared as a regular on Bravo’s “The Rachel Zoe Project” and OWN’s “Home Made Simple.” 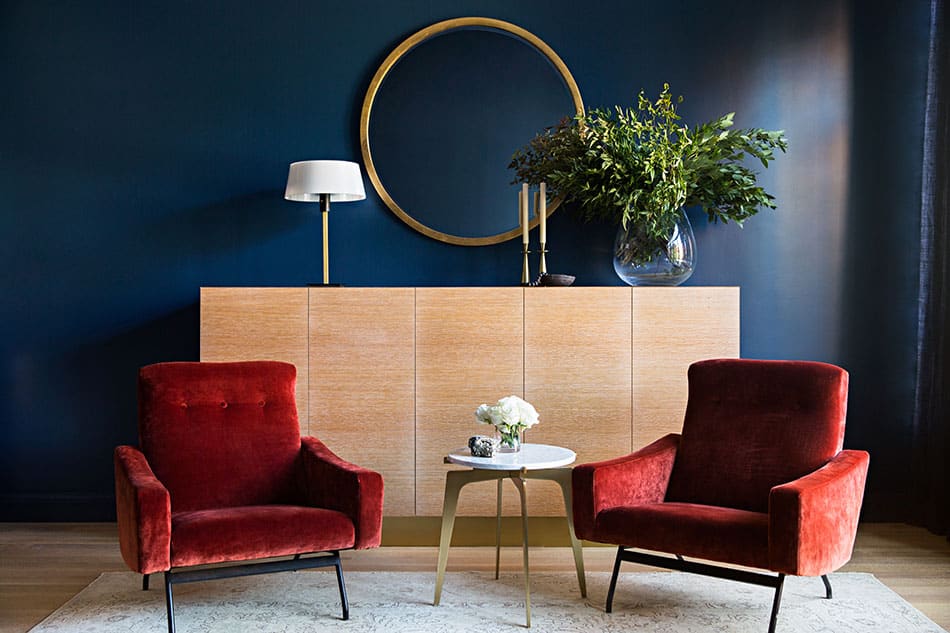 In the living room of a West Village apartment, Brent paired Joseph-André Motte armchairs with a Gabriel Scott Prong side table. Photo by Brittany Ambridge 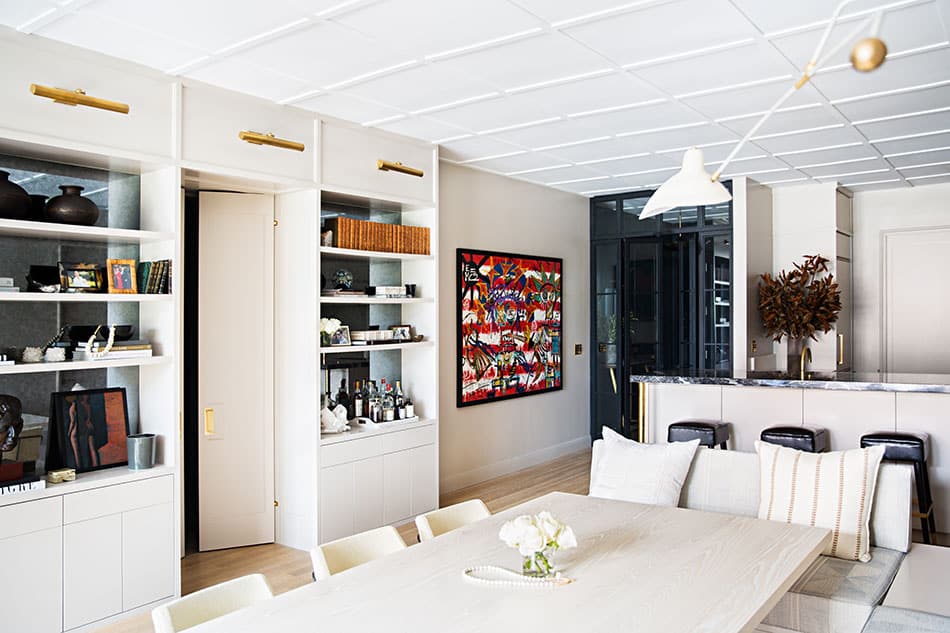 The kitchen and dining area features an Andrianna Shamaris table surrounded by 1950s school chairs and a banquette topped with cushions upholstered in Pierre Frey fabric. Photo by Brittany Ambridge 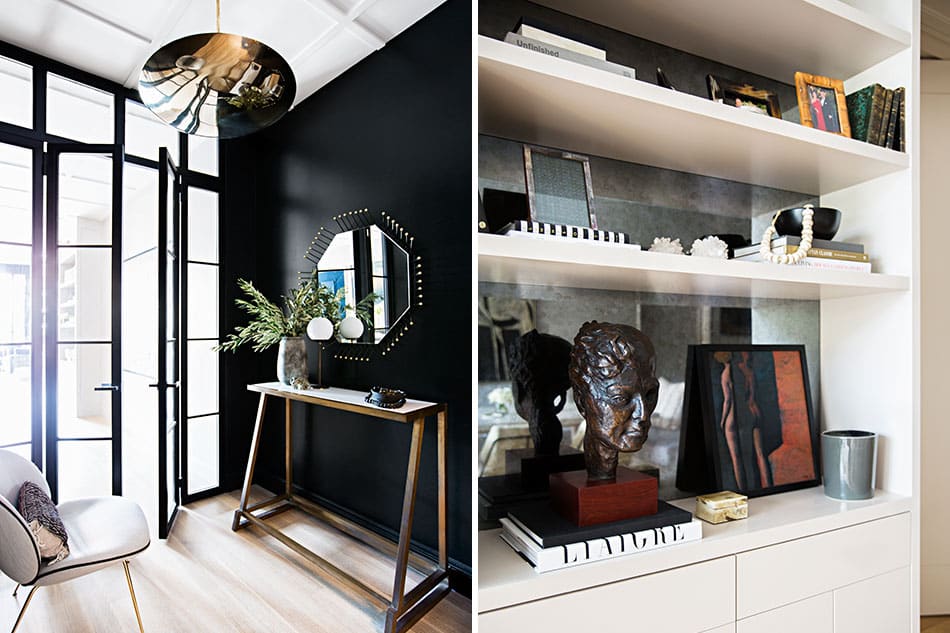 Left: Brent balanced the moody black walls of this entryway with a crisp white ceiling and light wood floors. Right: Mirrors add visual interest to the built-in bookshelves in the kitchen. Photos by Brittany Ambridge 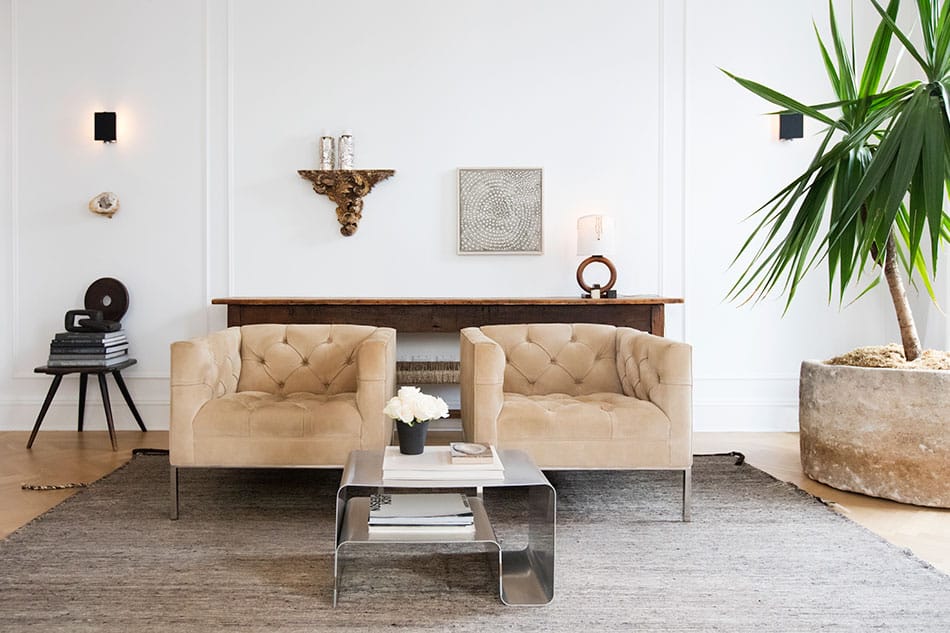 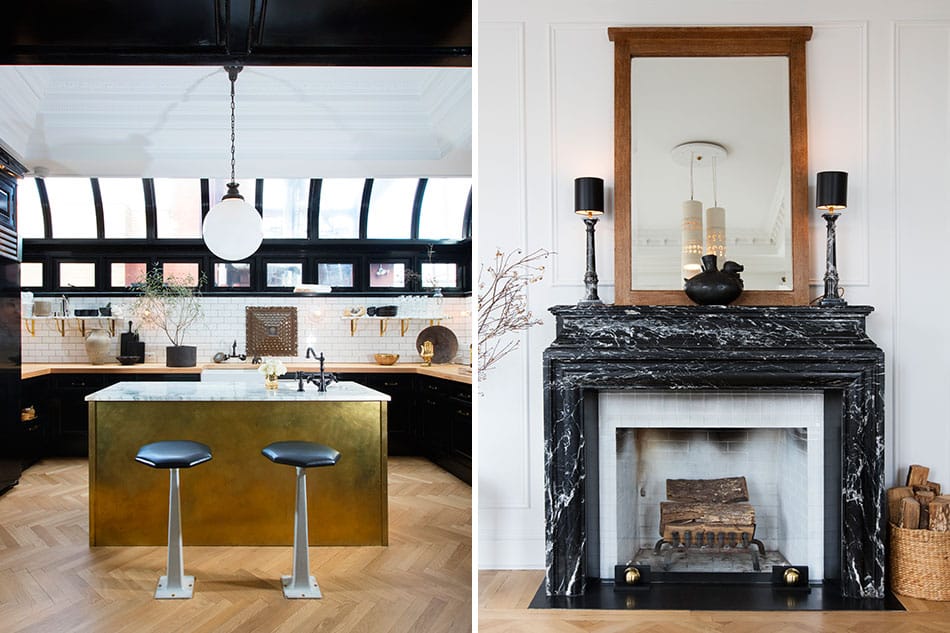 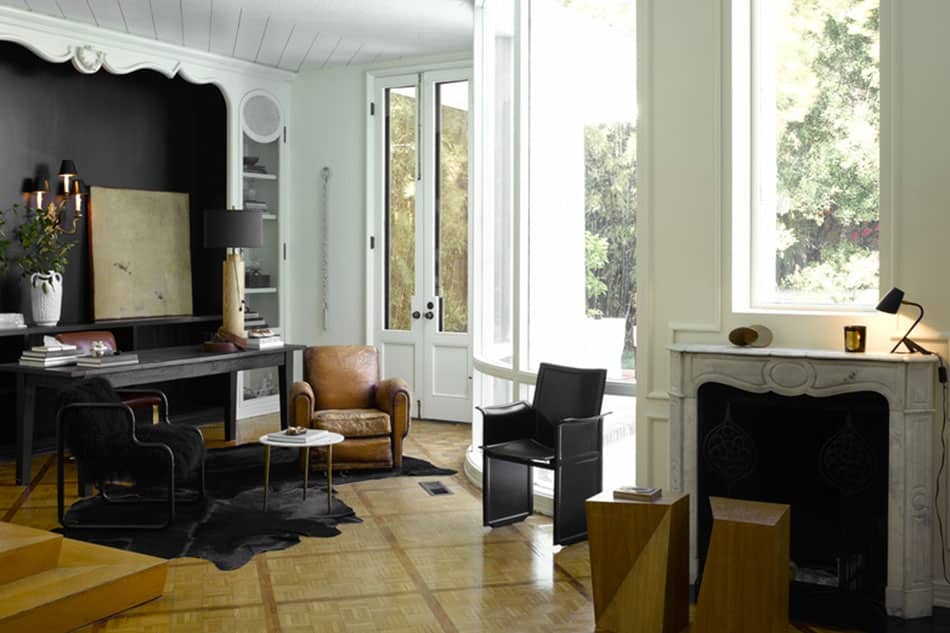 Brent describes the style of this Los Angeles home as between “Mad Men” and ultramodern. This space features the original 1939 moldings by architect John Elgin Woolf and marble-inlaid parquet flooring. Photo by Douglas Friedman 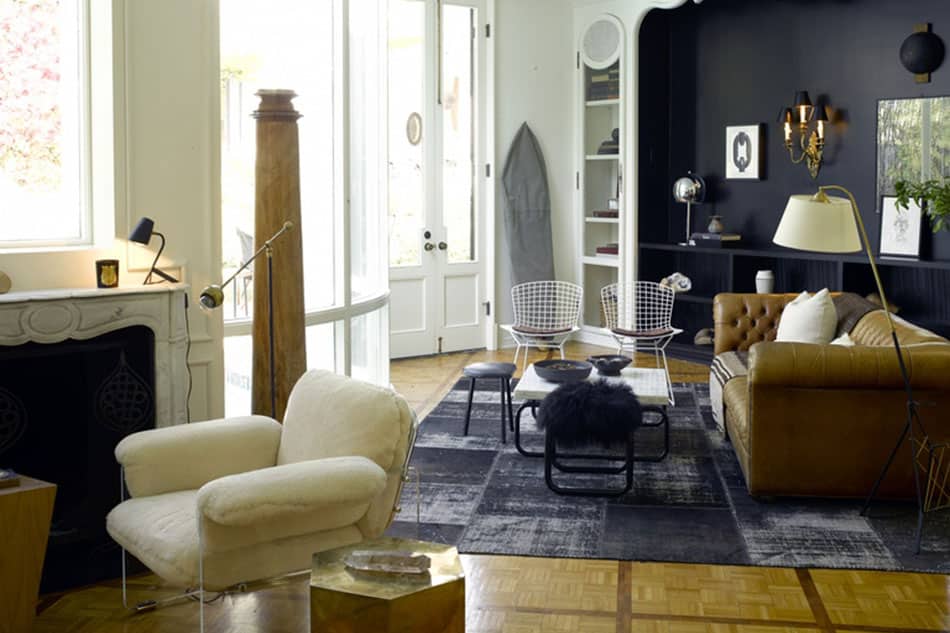 The living room includes a shearling-upholstered armchair by Pace Collection and a pair of Harry Bertoia for Knoll wire chairs with alligator cushions. Photo by Douglas Friedman 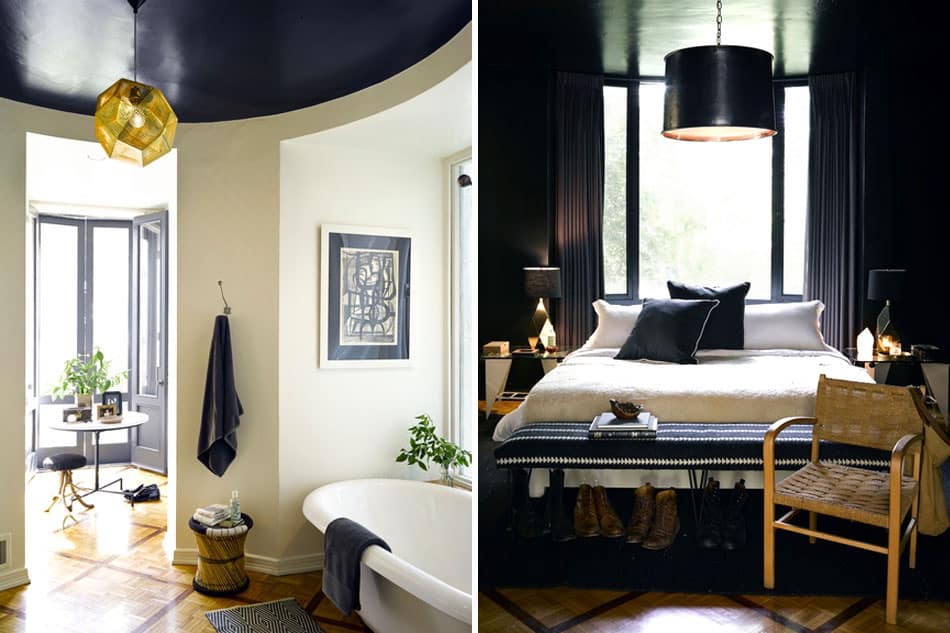 Left: A Tom Dixon pendant lamp illuminates the master bathroom. A 1950s art print is mounted above the tub. Right: The master bedroom, with its black-painted walls, includes a copper drum light fixture sourced from 1stdibs. Photos by Douglas Friedman 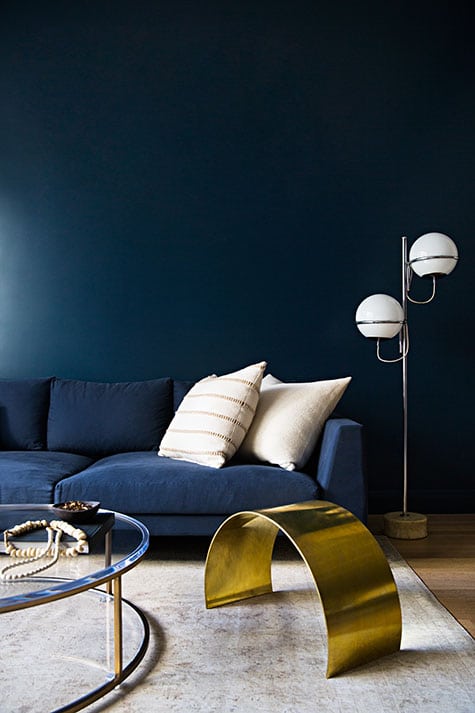 The living room of this West Village apartment features rich navy walls and a custom sofa upholstered in a matching shade of Schumacher fabric. The brass Arc stool is by Ash NYC. Photo by Brittany Ambridge

“TV’s fun, and I respect it for what it is,” Brent says. “It’s a great opportunity to connect with people. But,” he adds, “I don’t take any of it too seriously. It doesn’t fuel me creatively.” Instead, he gets his artistic adrenaline rush from collaborating with his staff at Jeremiah Brent Design, which he founded in 2011. “In my firm, I get to work with a lot of great creative people. There’s no ego for me. I don’t pretend to know everything,” he says. “Or anything.”

His self-deprecation belies his abilities, evidenced in interiors that blend elements both rustic and modern, bohemian and sophisticated. In a West Village living room with ink-colored walls, a contemporary Gabriel Scott side table is flanked by red-velvet-upholstered mid-century modern armchairs. In an open-concept Pacific Palisades home, a marble center table is paired with a rattan stool, and a nickel canopy bed is topped with a Moroccan wedding blanket.

“I like to experiment with styles,” Brent says. “I don’t want to be the designer who just has the one aesthetic I do really well.” He concedes, however, that he has definite preferences: “I  gravitate toward cleaner lines, natural materials, vintage furniture.” Among his favorite designers are Charlotte Perriand, Jean Prouvé, Harry Bertoia and Frank Lloyd Wright. Then there’s Jacques Adnet, whose name Brent cites throughout our conversation and whose Crystal Ball lamp (“I’m trying to decide if I need it”) the designer is currently coveting. “He was one of the most talented people in the world.”

Pursuing a career in interior design seemed like a natural fit for the Modesto, California–reared Brent, who says he “grew up as the kid who spent weekends going to open houses with my mom.” His interest wasn’t restricted to aesthetics. “I loved to imagine how people could live in the home.” How people live is a principle that guides his work today. “In the firm, we’re about creating moments and experiences that clients will have in them.” 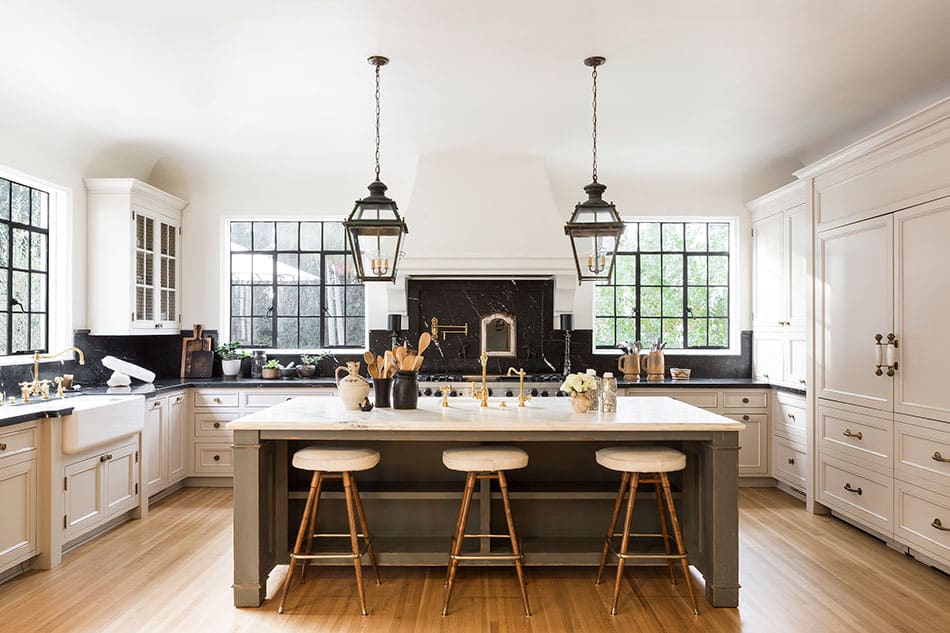 A pair of 19th-century French lanterns hangs over the marble-topped island in Brent and Berkus’s recently renovated Los Angeles home. Photos in this slideshow by Christopher Dibble 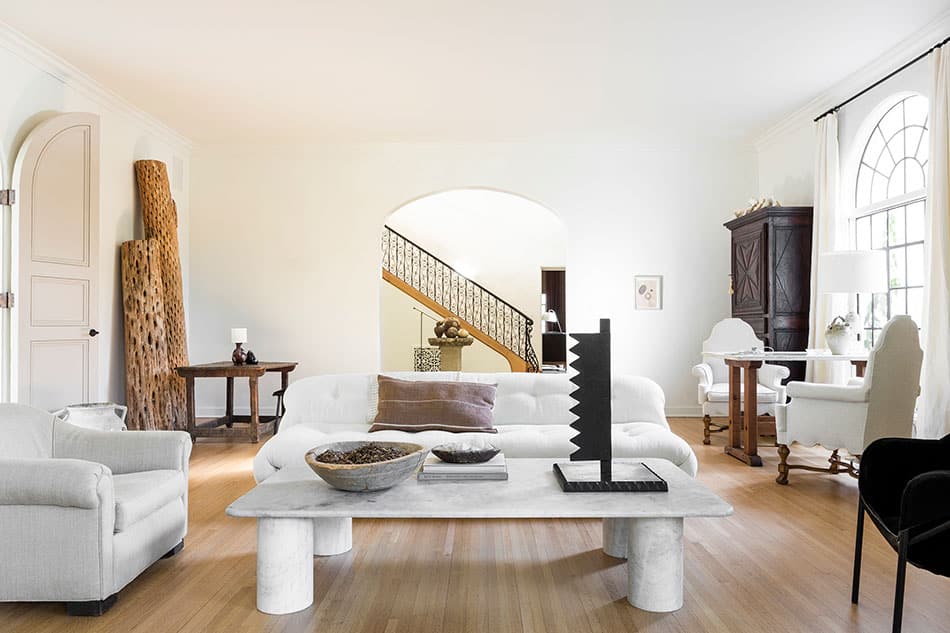 In the living room, they paired the Afra and Tobia Scarpa Soriana sofa from their New York townhouse with a marble cocktail table from Hollywood at Home. 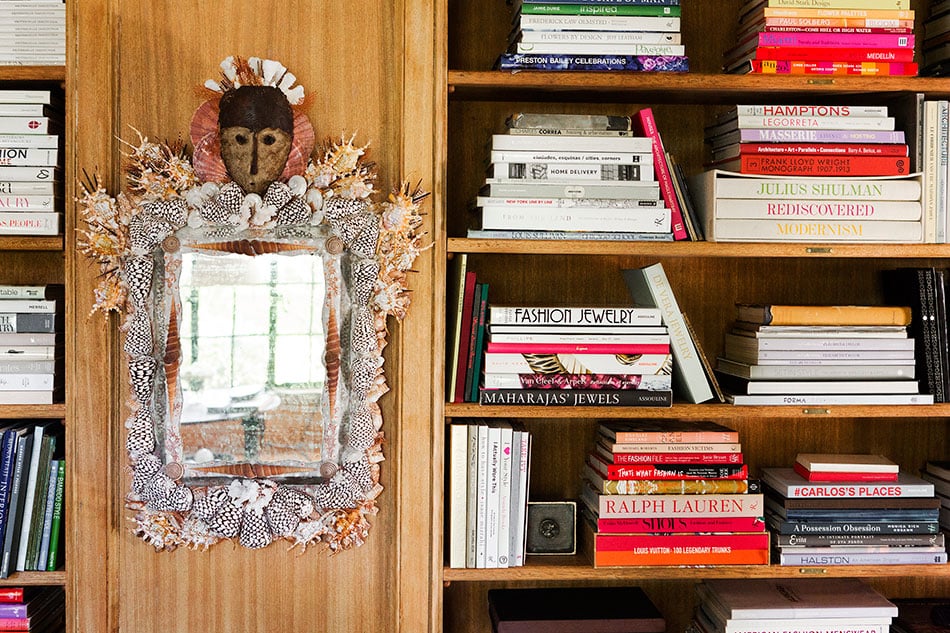 In the library, a quirky Matthias Vriens-McGrath shell mirror from Atelier MVM is mounted between bookcases. 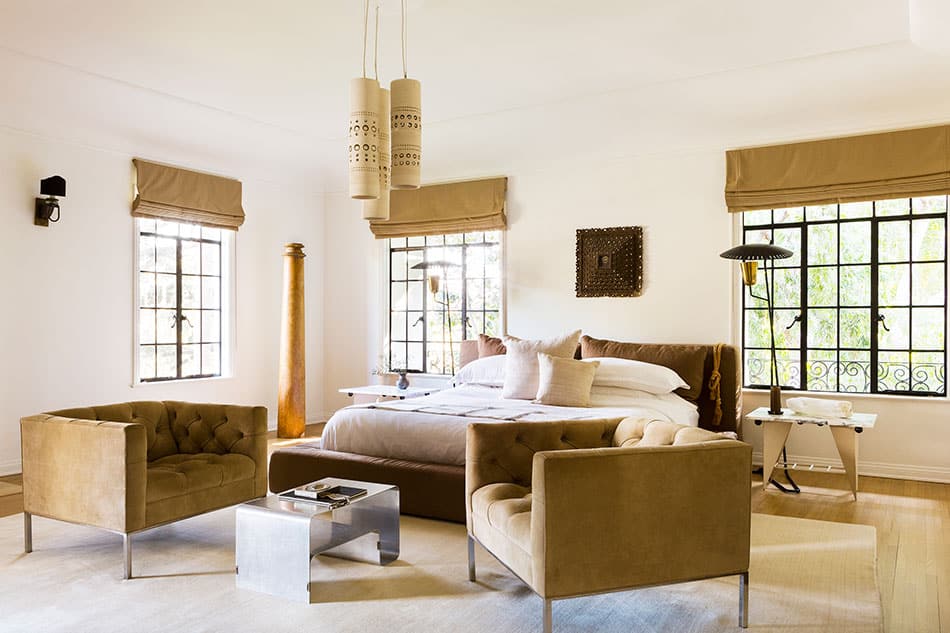 Brent and Berkus took the tufted-suede armchairs and steel table from the living room of their New York townhouse to create a sitting area in their L.A. master bedroom. 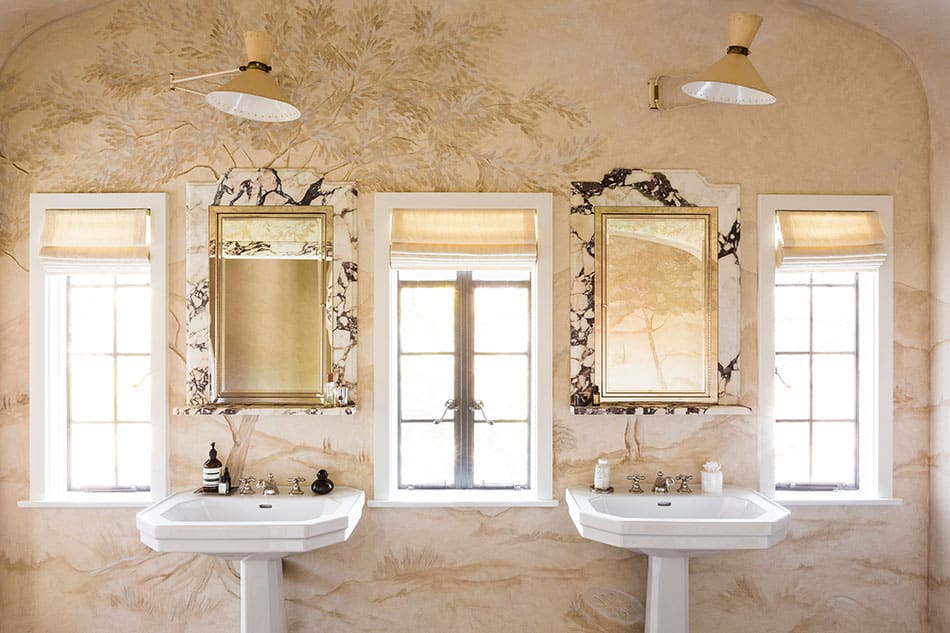 The master bath features a pair of sinks and mirrors with marble surrounds plus walls adorned with a mural by James Mobley. 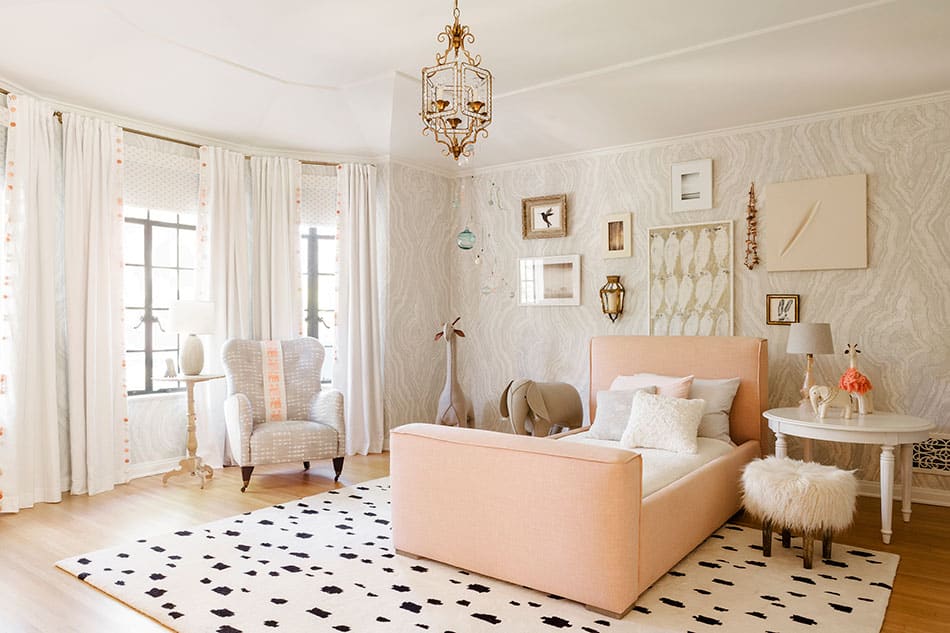 Poppy’s bedroom has wallpaper by Zak+Fox and Apparatus in the same design that adorned her New York nursery. A painting by Hunt Slonem is mounted above her pale-pink-upholstered bed. 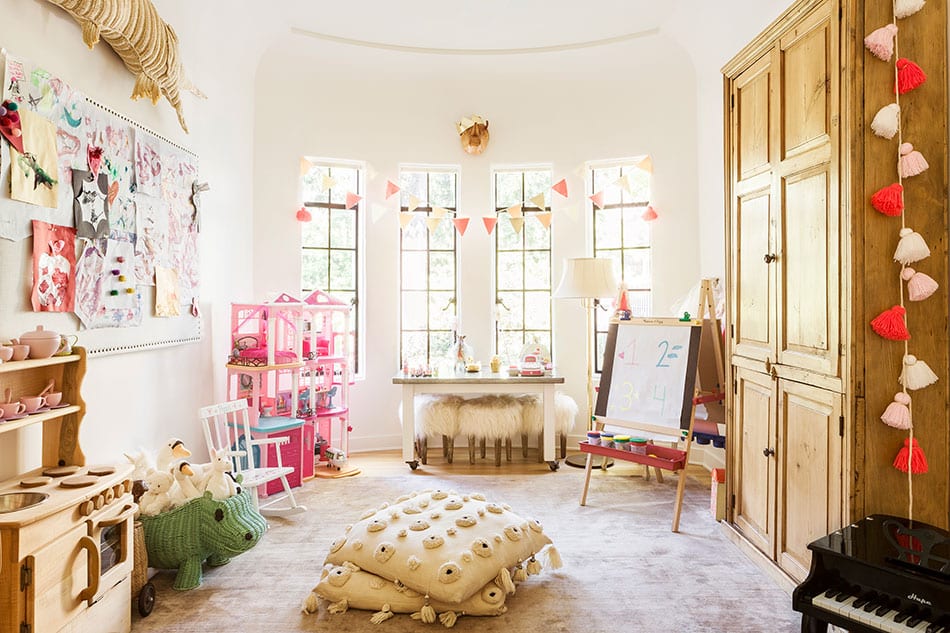 Punctuated with pink accents, Poppy’s playroom includes a fabric board with nailhead trim for displaying her artwork, a table with a trio of furry stools and, of course, a Barbie Dream House. 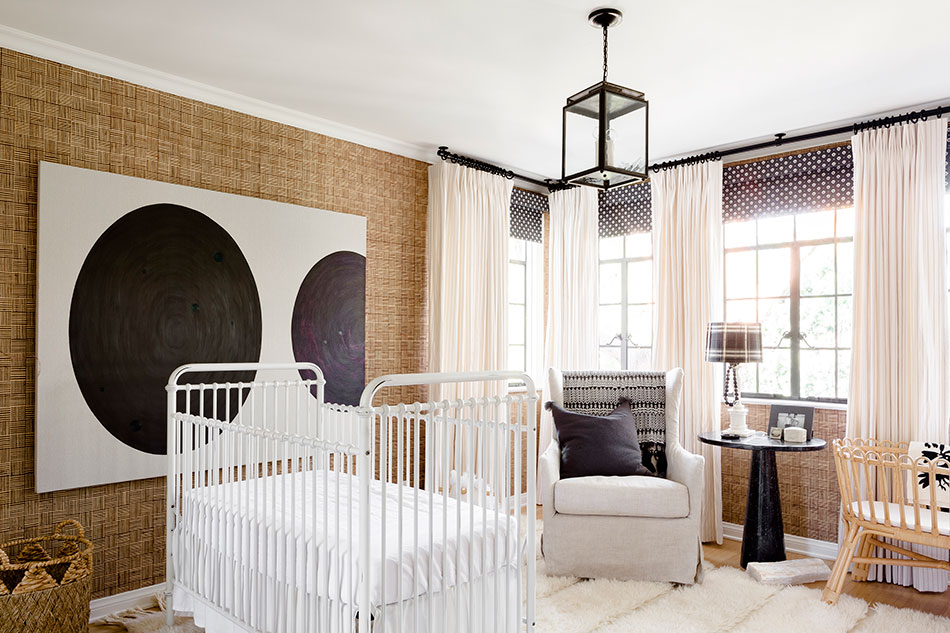 The walls of Oskar’s nursery are covered in sturdy grasscloth. The room also contains Poppy’s old crib, plus a low rocking chair, a fluffy area rug and a rattan bassinet. 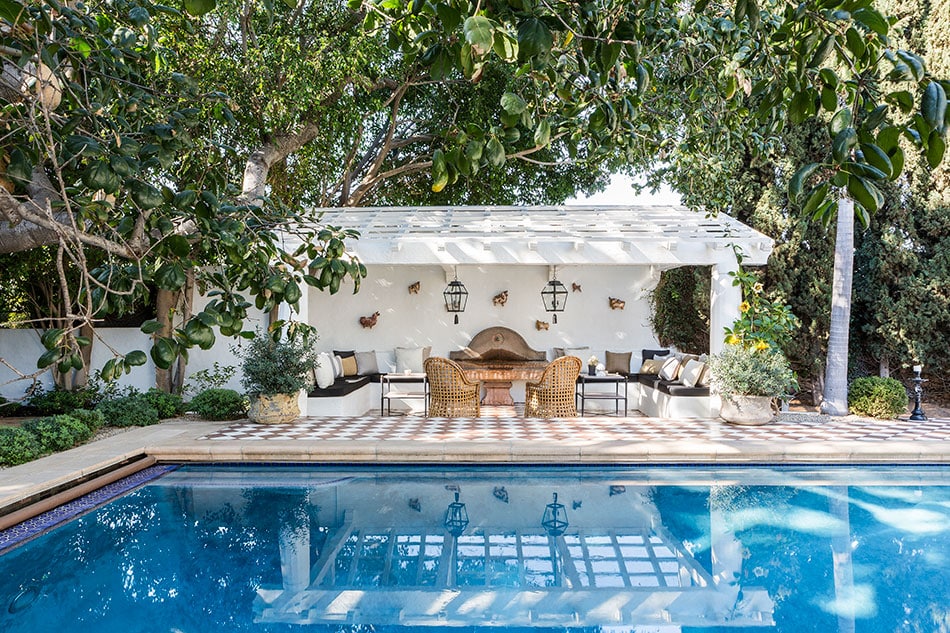 The poolside cabana features banquette seating and a pair of Kreiss chairs. 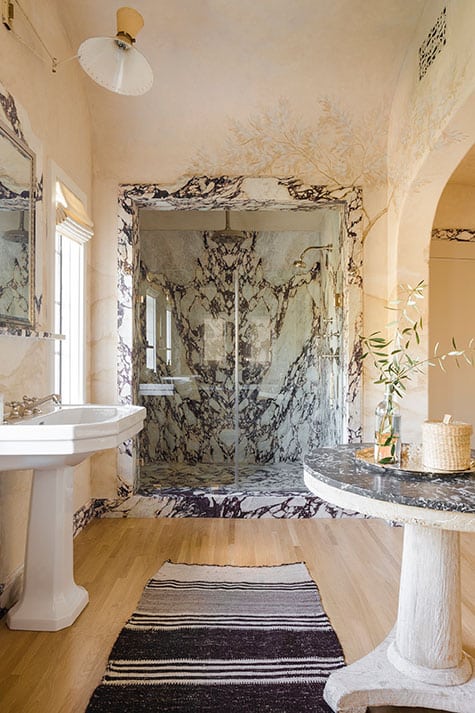 That includes his own Los Angeles home, a 1928 Spanish Colonial that he and Berkus recently renovated. The couple’s affinity for neutral tones is evident throughout the residence — even in the nursery. The only exceptions to the apparent no-color rule are the books in the library and Poppy’s pink-tinged bedroom and playroom, because even two grown men who also happen to be designers are no match for a toddler’s commitment to the Barbie Dream House aesthetic.

How does he juggle the responsibilities of a growing family with work? It’s a question often broached to working mothers but rarely fathers. “That’s been at the top of our minds lately,” he admits. “It is a balance, and we’re trying to find it. We have the luxury of owning our businesses separately, but that’s a different kind of stress.” When it comes to designing a home together, the pair has learned to expertly navigate what can be a relationship minefield. Brent, who explains that they moved frequently early in their relationship, estimates that they’ve lived in at least six homes as a couple. “We design really well together, but we don’t order pizza well together,” he says, adding with a laugh, “He doesn’t like to share.”

Pizza conflicts aside, the two clearly have no problem accepting and embracing each other’s personal histories. Just consider the name of their infant son: Oskar was the middle name of Berkus’s former partner, photographer Fernando Bengoechea, who died in the 2004 tsunami in Sri Lanka, where they were vacationing. Berkus told People it was Brent’s idea to honor Bengoechea in this way. The generous gesture, which some might find unthinkable, is perfectly in keeping with Brent and Berkus’s partnership, both in design and in life. As Brent says, “We complement each other.” 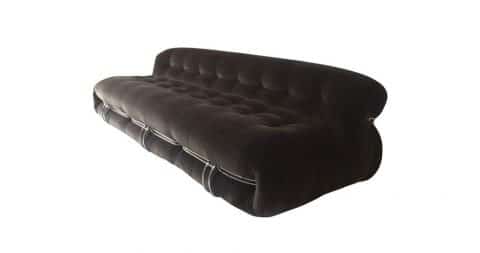 “This sofa is one of my favorite pieces. Timeless, elegant and impactful, it’s the perfect piece to ground any space or design aesthetic.” 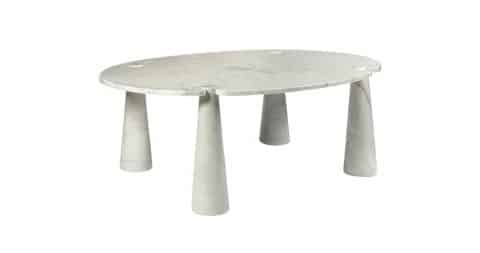 “Marble is one of my favorite decorative details, and this table feels like the perfect blend of masculine and feminine.” 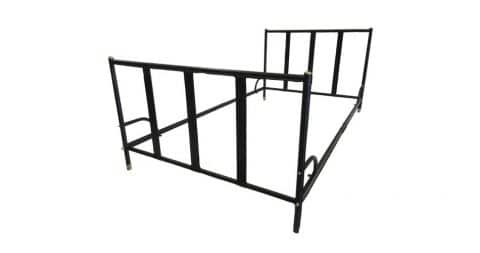 “Jacques Adnet is timeless. His pieces showcase the beautiful synchronicity that occurs when romantic meets utilitarian.” 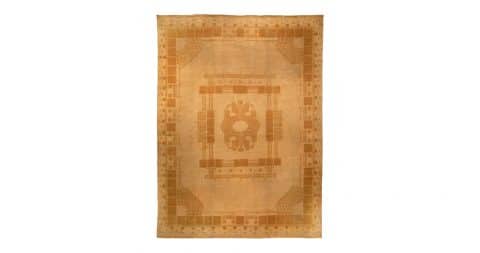 “What can I say other than that I am madly inspired by anything Viennese. This rug feels warm, historical yet contemporary.” 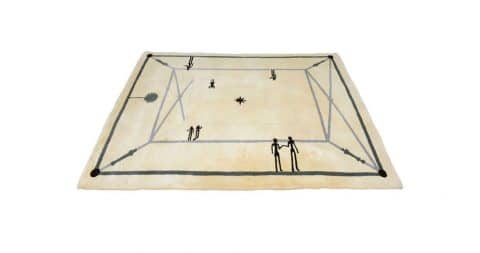 “Giacometti is known for his beautiful furniture, but his rugs are some of the most spectacular pieces I have seen.” 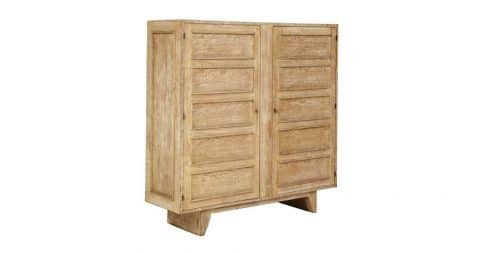 “Not only is this cabinet masculine and modern, but the soft rounded edges make it the perfect addition to any home.” 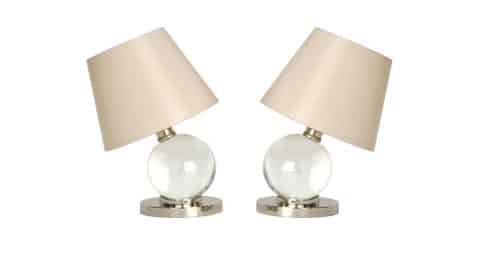 “I love the imperfect perfection of these lamps. They carry significance with their design but do not obstruct visually.”