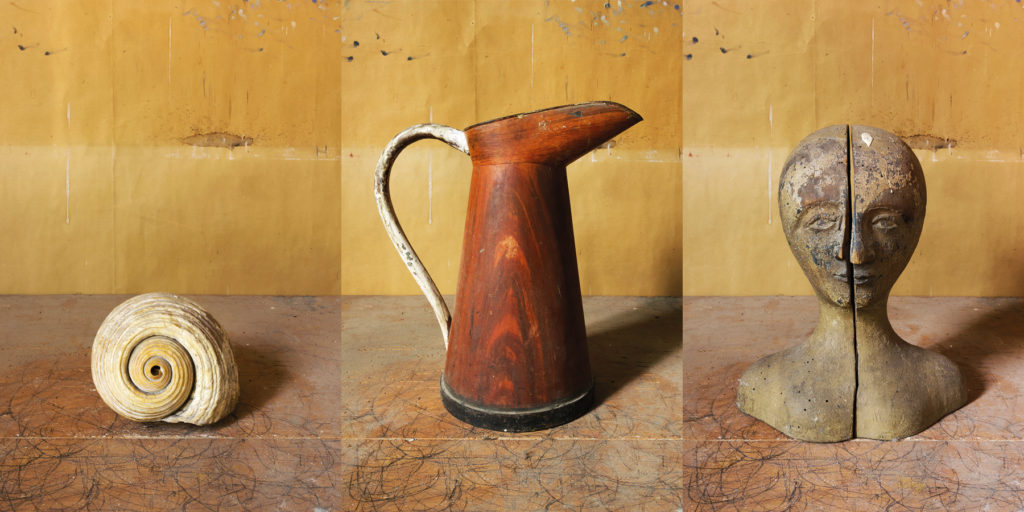 Joel Meyerowitz traveled to Italy to shoot his own versions of the painter’s haunting still lifes. What he came up with has a poignancy all its own.

by Barbara A. MacAdam 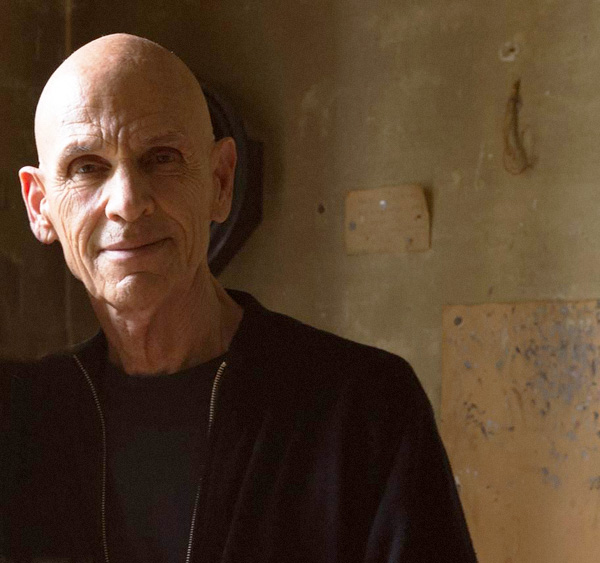 May 30, 2016To create the images in his latest book, Morandi’s Objects, Joel Meyerowitz visited the Bologna studio of Giorgio Morandi and photographed the belongings of the late, great still-life painter, three examples of which we see at top. All photos © the artist, unless otherwise noted

Photographer Joel Meyerowitz recalls how he became involved — intimately — with the work and sensibility of the obsessive still-life painter Giorgio Morandi. It all began last year, when Meyerowitz was spending a sweltering summer in Italy. “It was so hot you couldn’t go out,” he says. “I would sit in a studio just studying the objects around me.” It was then that he thought about how Morandi (1890–1964), with whom Meyerowitz had been fascinated since his art-school days in the ’60s, “would sit in the studio in his Bologna home for days on end, living with his mother and these objects.” So he decided to visit Morandi’s humble atelier in person.

“I was looking for the spirit each object had,” says the 78-year-old photographer, whose recently released book Morandi’s Objects (Damiani) showcases some 270 of the dust-coated items Meyerowitz closely examined in the studio. “I was even looking into the background behind the objects and wondering, ‘Can you turn a cylinder around and around and find on one turn that there is a different quality?’ ” 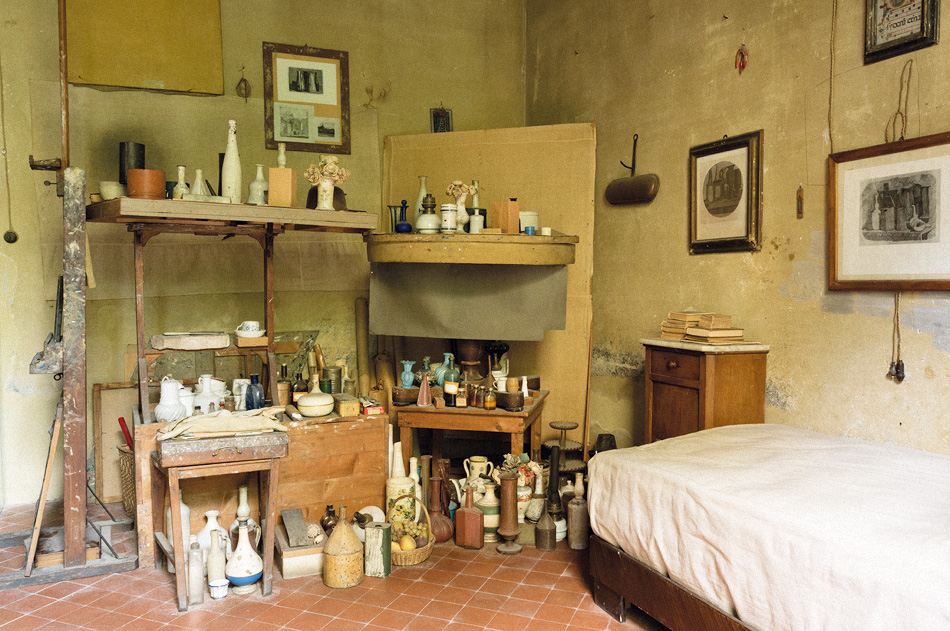 “I sat at Giorgio Morandi’s table in exactly the same place that he sat for more than 40 years,” Meyerowitz writes in the book. “On his table the same slant of light glowed for me as had for him.” 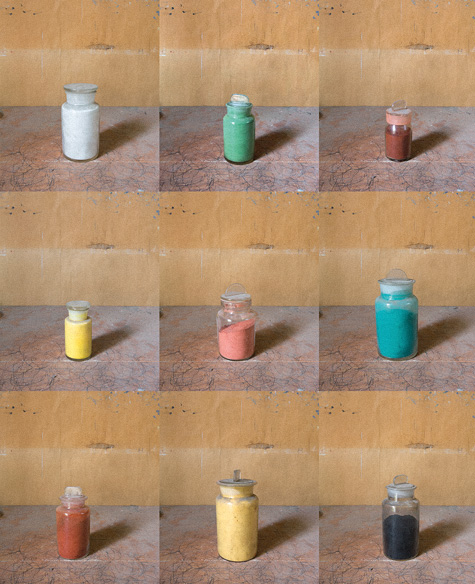 While spending time in Bologna, Meyerowitz reflects, “I discovered how extraordinary a colorist Morandi was. I held ten bottles of pure pigment that he ground himself, and from them I could understand how he diluted them to the paler tones one sees in the garments of saints in paintings by Giotto, Piero della Francesca and Masaccio.” 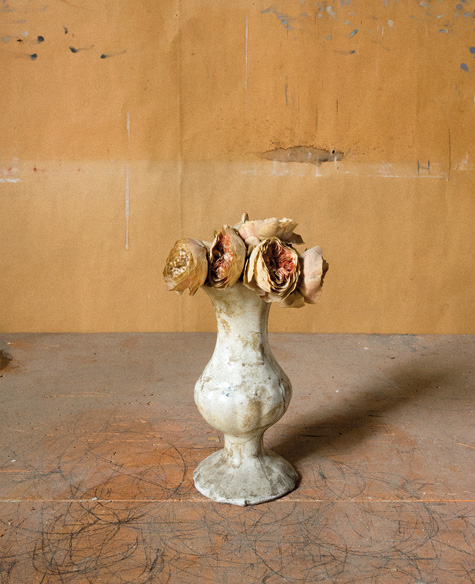 Meyerowitz shot the objects on the same heavily marked table where Morandi had worked, and in front of the same paper affixed to the wall. 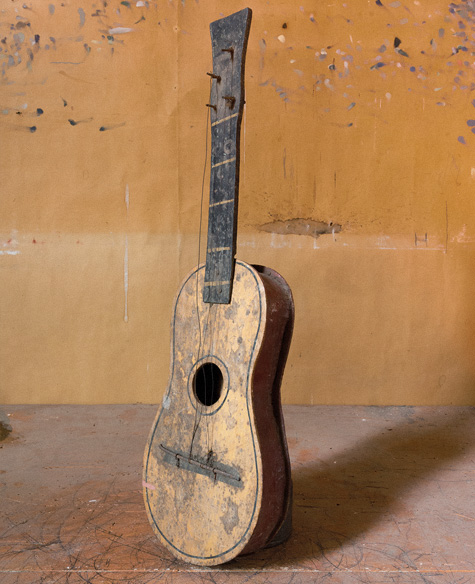 Whereas Morani usually painted groupings of things, Meyerowitz trained his camera on individual items, which feel almost like portraits. 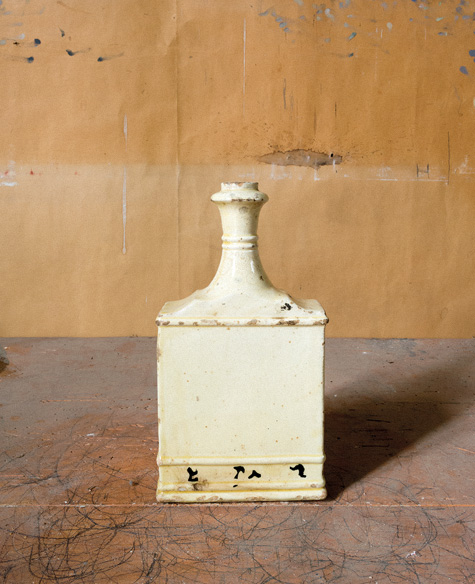 What many art lovers don’t realize is that Morandi manipulated the objects themselves, sometimes painting their surfaces to resemble plaster. 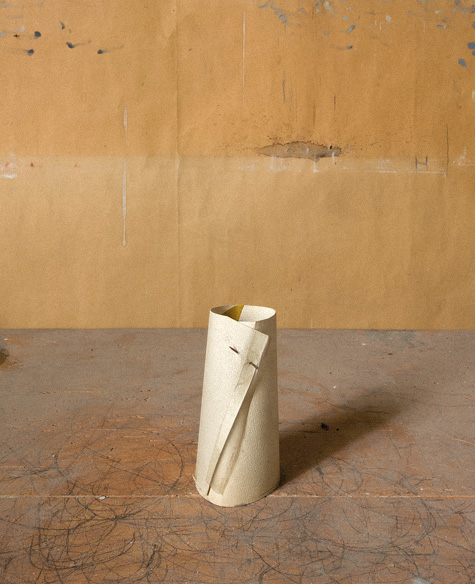 Morandi even came up his own shapes, which Meyerowitz captures tenderly.

Meyerowitz followed Morandi’s practice of studying the forms as the light and time changed, hoping to become enlightened. He looked at the pieces together and in relationship to one another. “Each time I picked up an object, I wondered if I could find something like a spirit, a personality,” he says.

In his essay for the book, Meyerowitz remembers how “in the ambient light of the room, I discovered how extraordinary a colorist Morandi was. I held ten bottles of pure pigment that he ground himself and from them could understand how he diluted them to the paler tones one sees in the garments of saints in paintings by Giotto, Piero della Francesca and Masaccio.” He realized, too, how “incredibly flat” the objects are, painted up against the background.

Through June 25, several of Meyerowitz’s photographs from the series can be seen at the Center for Italian Modern Art (CIMA) in New York, as part of a show dedicated to Morandi’s artistic output and his ongoing influence on contemporary artists. The pieces by Morandi, mostly from the 1930s, include a few dozen of his familiar paintings and works on paper, but also some of his lesser-known early metaphysical paintings and later minimalistic works. (Alongside these is a selection of works by artists who, like Meyerowitz, have been inspired by him, such as Tacita Dean, Wolfgang Laib and Matthias Schaller.)

Although Morandi’s expressionistic forms are often thought to have been fleshed out on the canvas, Heather Ewing, executive director of CIMA, explains that “Morandi manipulated many of his objects.” He poured yellow paint in one vessel, for example, which appears to give it a different shape. He painted the outside of some vases to make them look as if they were plaster, and he fabricated some out of paper and mixed his own pigments.  “We’re very excited to be presenting a new perspective on Morandi,” says Ewing. “Our installations are unique because they act as a springboard for careful and extended re-examinations of modern Italian art.”

In his photographs, Meyerowitz, in effect, appropriates and interprets the objects he found in the Bologna studio — capturing them from the same perspective, in the same positions, before the same paper tacked up on the wall and with the same markings visible. There are penciled circles on the table indicating where the items should be placed, as well as a horizontal line that is used to position them, like characters on a stage.

The relationship and repetition of the objects’ placement was of interest to Renato Miracco, a curator and art historian who co-organized a 2008 Morandi exhibition at New York’s Metropolitan Museum of Art. He points out that the artist made many versions of what appear to be the same paintings, each one only slightly different from the next. When Miracco installed three of the “same” works at the Met side by side, he was almost surprised to observe that viewers were not bored.

“Each time I picked up an object, I wondered if I could find something like a spirit, a personality.”

“What strikes them,” he realized, “is that the paintings are equal to our lives. Each life is totally different, but we move slightly, exactly as Morandi does with the painting. He makes little shifts, to the right or to the left. This relates to the viewer’s private life. We tend to like pretty much the same things all our lives. Morandi shows how we can change our lives with the same simple things and with the same subtle shifts.”

In the introduction to the book, Meyerowitz’s wife, the writer Maggie Barrett, notes that an artist’s “space is a secretive self-portrait of ritual and chaos; a place where the artist surrounds himself with bits and pieces of fabric, string, rusty nails, here an unwritten postcard, there a book of poems, a bus ticket, a vase of long-dead flowers gathering what to the outsider appears to be dust, but to the artist is the patina of time.” Such would apply to both Morandi’s and Meyerowitz’s art. 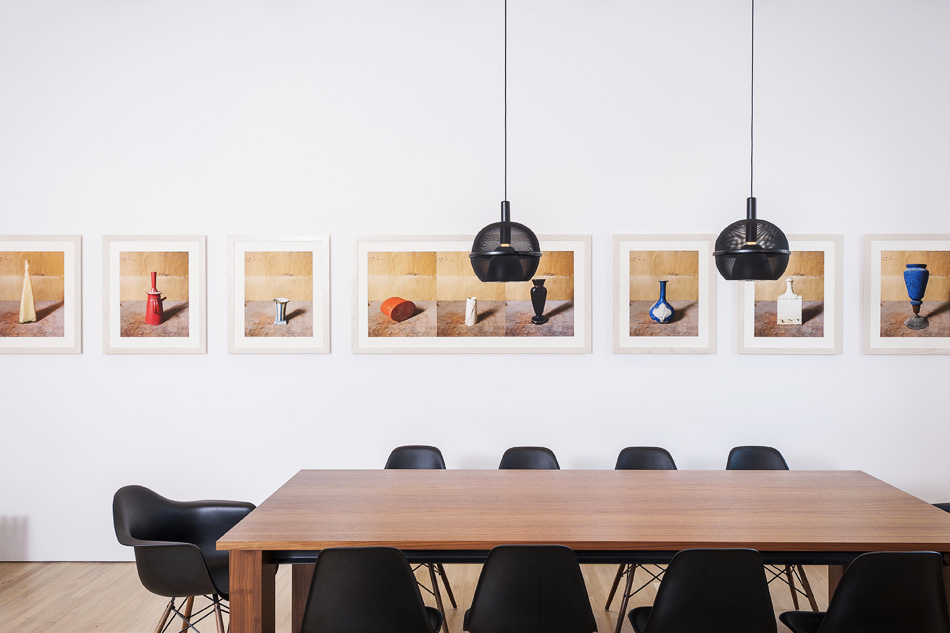 Several photos from Meyerowitz’s series are currently on view at the Center for Italian Modern Art in New York, in an exhibition dedicated to Morandi’s work and his influence on contemporary artists. Photo by Walter Smalling Jr. 2015, courtesy of CIMA 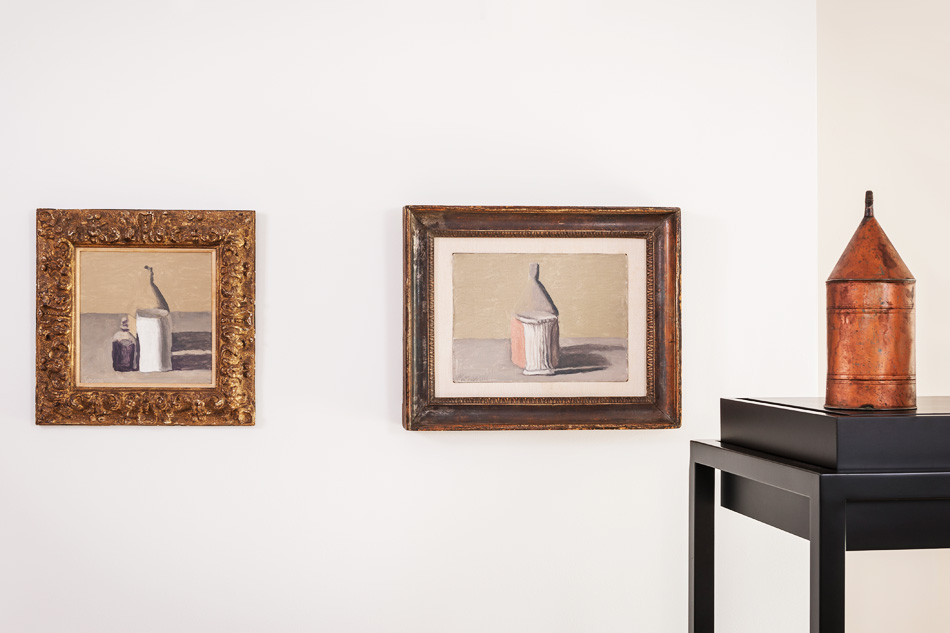 This vignette in the CIMA installation demonstrates how Morandi would paint multiple versions of a scene, each one only slightly different from the next. Photo by Walter Smalling Jr. 2015, courtesy of CIMA 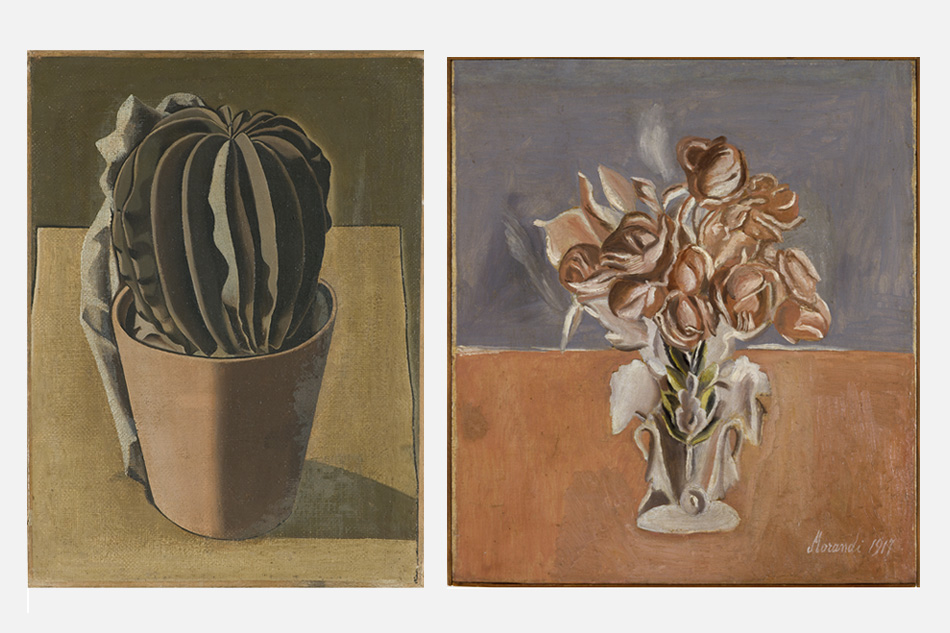 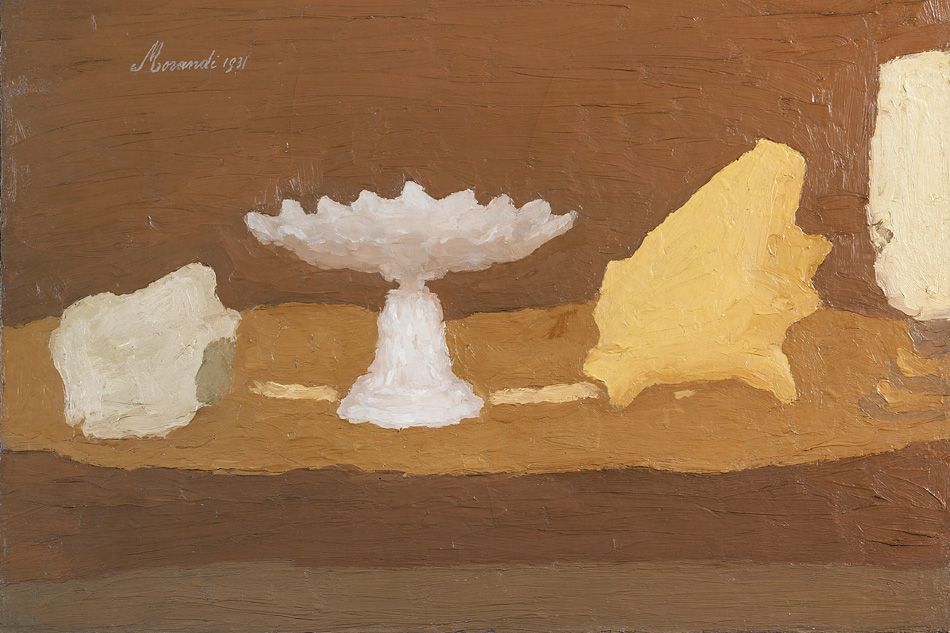 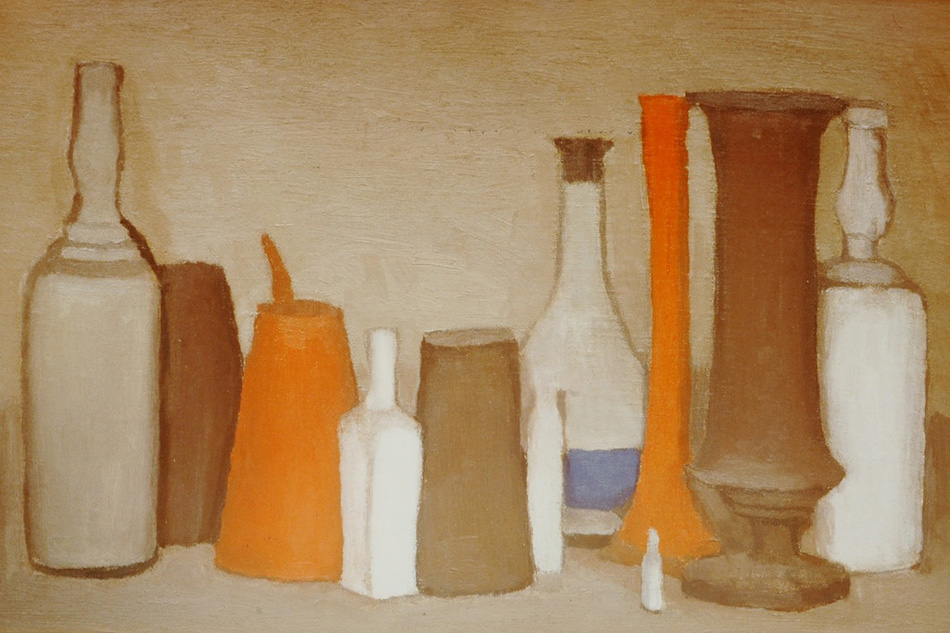 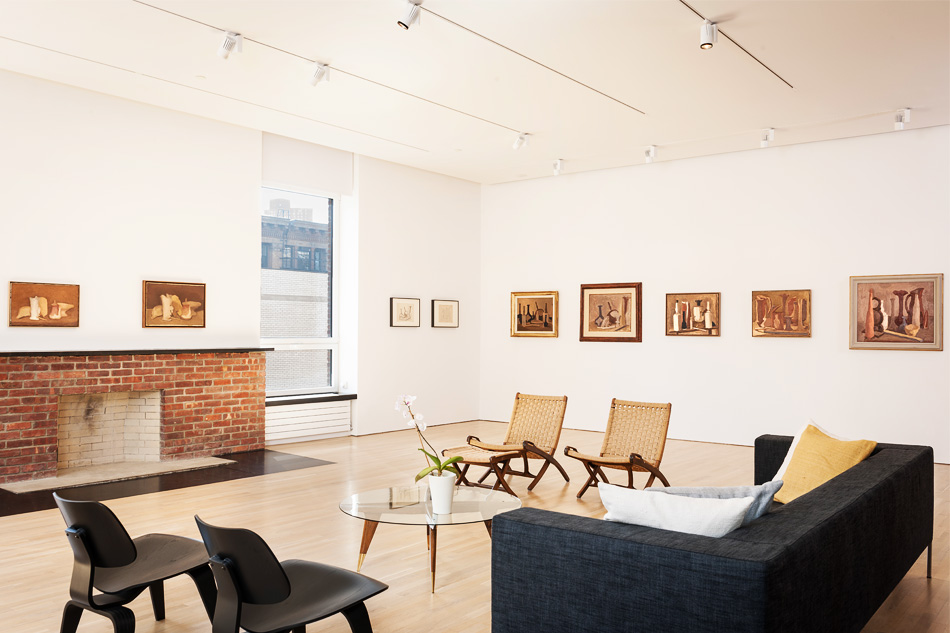 Visitors to CIMA can lounge among the artworks to get a sense of what it’s like to live with them. Photo by Walter Smalling Jr. 2015, courtesy of CIMA 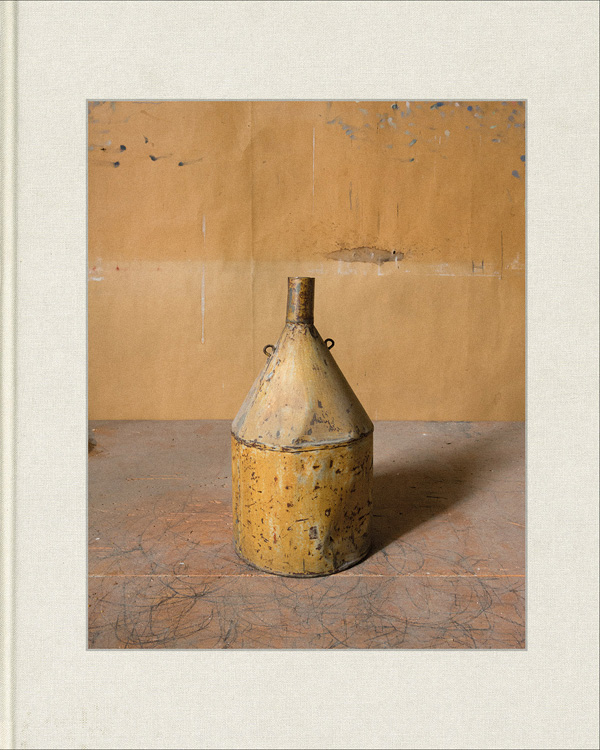 The cover of Morandi’s Objects features a solitary photo and no text.

Also in the book, Meyrowitz writes in his essay, beautifully titled “The Ordinary Sublime”: “I sat at Giorgio Morandi’s table in exactly the same place that he sat for more than 40 years. On his table the same slant of light glowed for me as it had for him. . . . Morandi, I can only guess from spending time in his studio and holding his objects, could commune with these humble forms precisely because their personae were available to him through their pure mathematical simplicity of form.”

Musing on his “journey” into Morandi-land, Meyerowitz told Introspective that he was left wondering, “How do I go home, and how do I work with my still lifes? I try to think of the objects in the same room with the same light as sixty years ago. I want to see if I’m up to the task.” He continues: “The objects I’ve been collecting have a relation to Morandi only in spirit. How will that ultimately affect my work?”

Entering Morandi’s world “is like entering a lightless room,” says Miracco. “Slowly, we begin to understand the colors of our surroundings, primarily because we are used to a constant and repetitive bombardment of instantaneous images. We can say that Morandi is to the art world what slow food is to the culinary world. He’s the quintessential slow artist.”