John Berggruen’s Latest Opening Is His Own 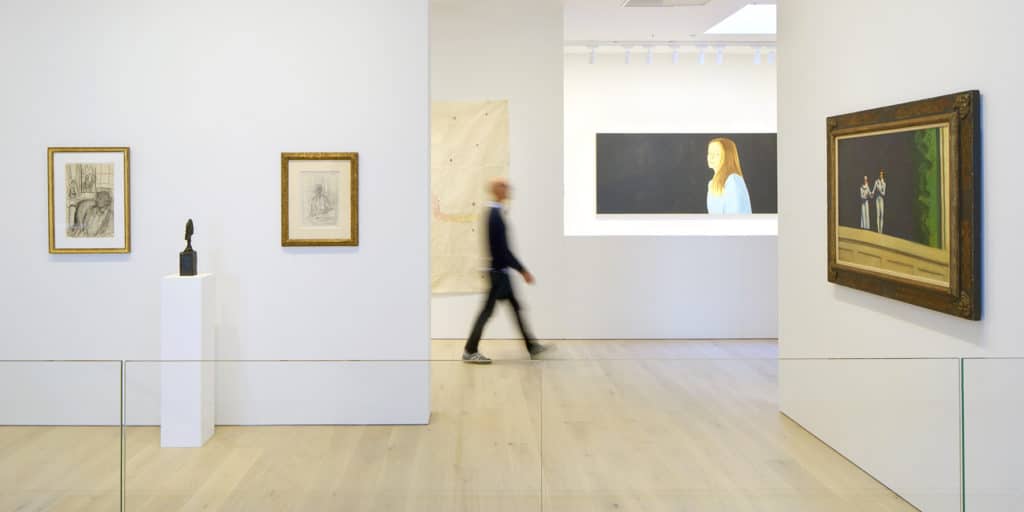 The veteran art dealer, along with his wife and business partner, Gretchen, has launched a multistory gallery in San Francisco. 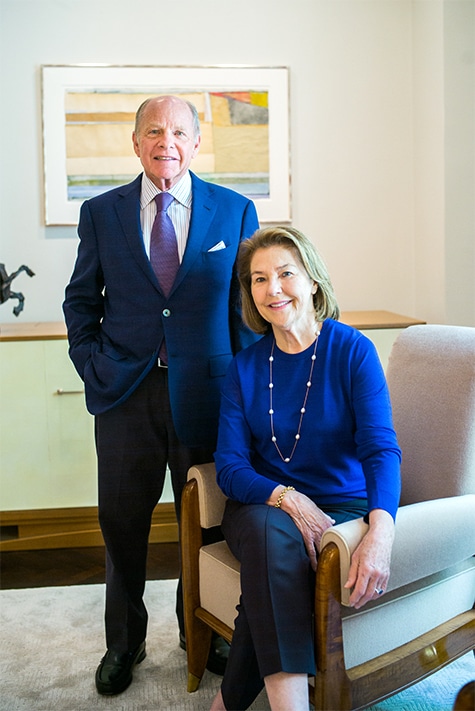 February 6, 2017San Francisco’s John Berggruen Gallery — overseen by its eponymous owner and his wife, Gretchen — has been a major player in the contemporary-art market for more than 40 years (portrait by John Dolan). Top: The couple recently opened a new tri-level space near the San Francisco Museum of Modern Art. All photos by Bruce Damonte, Courtesy of Berggruen Gallery unless otherwise noted

Before I moved to the West Coast more than 30 years ago, I knew only one name on the San Francisco gallery scene: John Berggruen.

Reviews of Berggruen’s exhibitions of artists with even better-known names — Frank Stella, Manuel Neri, Roy Lichtenstein — appeared sporadically in the New York art magazines to which I then contributed, alongside his occasional staid advertisements. When I finally got to know the John Berggruen Gallery as a regular visitor (I was the longstanding art critic for the San Francisco Chronicle), it proved to fit the mold of the sleek Manhattan venues that had tested my nerves and judgment as a novice critic.

Much later, I learned of the greater fame of Heinz Berggruen, John’s late father, whom he began to know only as a young adult, his parents having divorced when he was a child. John was born and raised in San Francisco, while his father returned to Europe. Heinz Berggruen knew Pablo Picasso, Henri Matisse and other modernist luminaries in early postwar Paris, and he represented their work. The elder Berggruen later became famous for gifts, loans and sales of canonical 20th-century artworks to the German state. He tried at first to discourage John from entering the art business, deeming it unwisely risky, but he finally gave the younger man his start in 1970 by consigning him lithographs for sale at a meager commission. This toehold gradually grew into a high-profile and highly successful contemporary art gallery.

Having occupied the same address in a swank downtown San Francisco shopping district for more than 40 years, Berggruen closed in late 2016 and has now reopened in a three-story corner building just a few blocks from its old address. The new gallery adjoins the Gagosian Gallery’s recently inaugurated street-level space, directly across from the renovated, vastly expanded San Francisco Museum of Modern Art, which welcomed back visitors last May following a three-year hiatus. (As a young man, Heinz Berggruen worked as a curator at SFMOMA’s ancestor, the San Francisco Museum of Art.) 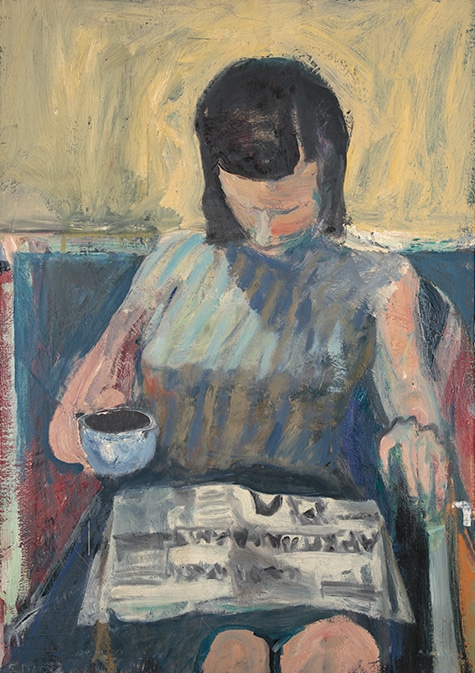 Woman with Newspaper, 1960, by Richard Diebenkorn, is on view in “The Human Form,” the Berggruens’ current exhibition, up through March 4.

The new Berggruen gallery’s 10,000-square-foot interior, reconfigured and refined by the local firm Jennifer Weiss Architecture, incorporates two floors of exhibition rooms, plus storage and a project and event space.

John Berggruen and his wife and longtime business partner, Gretchen, also stand out among their home city’s collectors for the discrimination and insider access that their private holdings represent. A visit to their home — an art-filled little corner of San Francisco heaven — about 20 years ago left as strong an impression on me as any domestic space I’ve seen here has. My recent second visit found many artworks added and a few repositioned. It once again made me wish that I never had to leave.

The art-viewing experience begins even before you set foot in the Berggruens’ home: Outdoor sculptures by Mark di Suvero, Barry Flanagan and Nathan Oliveira set their house apart from its Russian Hill neighbors more discreetly and unmistakably than a nameplate ever could. But their 1854 shingle-style house shows its true distinction on the inside, thanks to a subdued, gloriously fenestrated rebuild by architect Robert A. M. Stern.

The Berggruens both attended San Francisco State University in the 1960s, but they never met while there. After college, she worked writing grants and organizing events, occasionally controversial ones, for the Oakland Museum of California until its then-director, George Neubert, suggested that a top-drawer gallery would be the best place for her to learn all the aspects of exhibition management that interested her. John, who had by then already gotten his start in business, soon hired her. 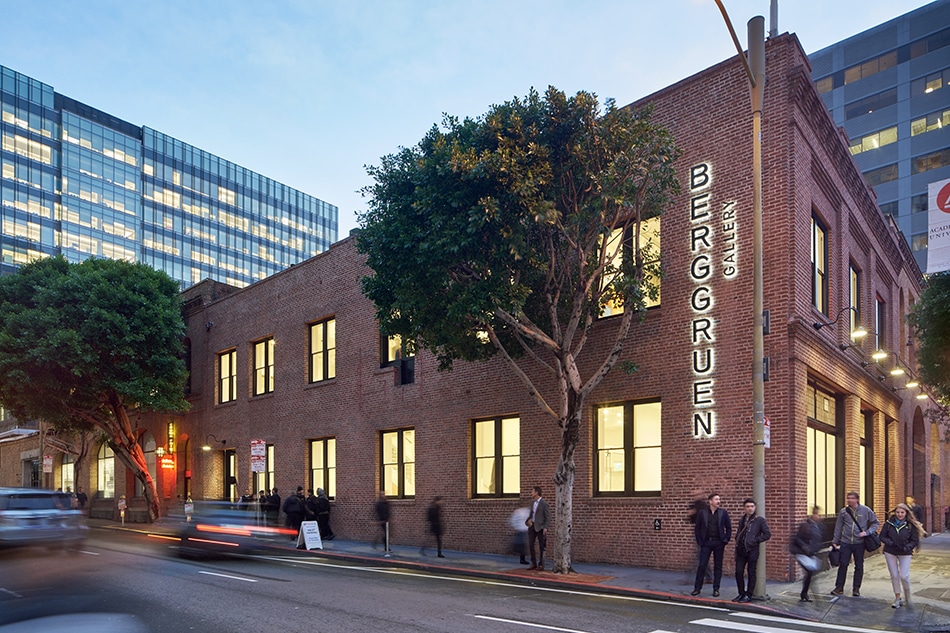 The gallery’s new home is at 10 Hawthorne Street, just around the corner from SFMOMA. 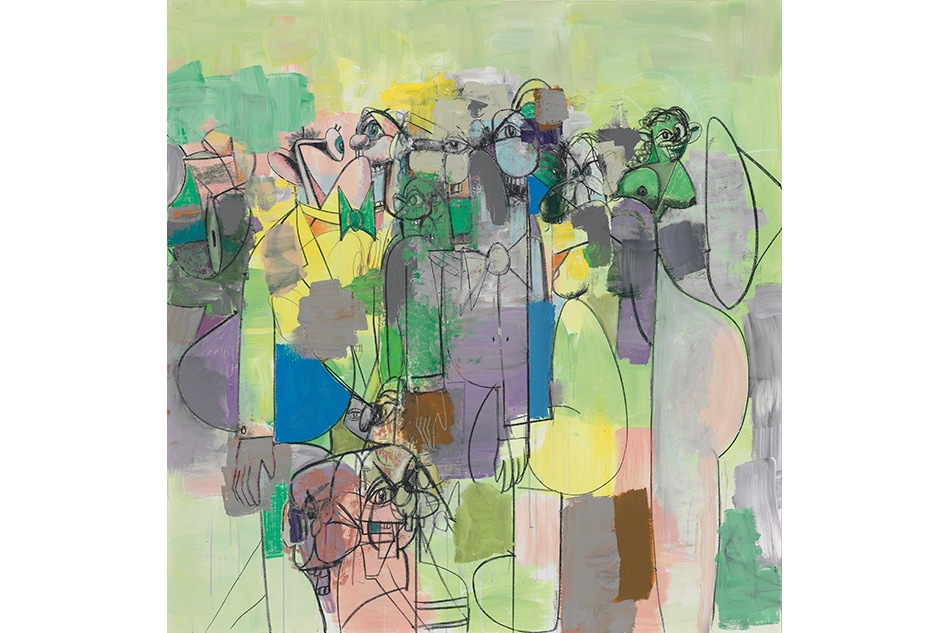 George Condo painted Abstracted Figures, another piece in “The Human Form,” in 2011. 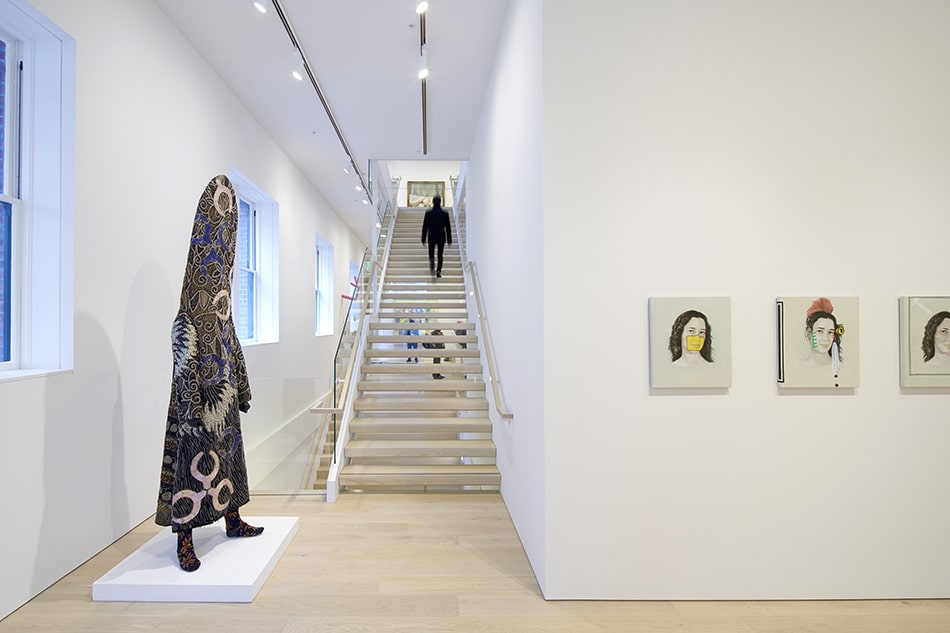 Inside the gallery, a 2005 Nick Cave Soundsuit stands near Adriana Varejão’s Kindred Spirits I, 2015. 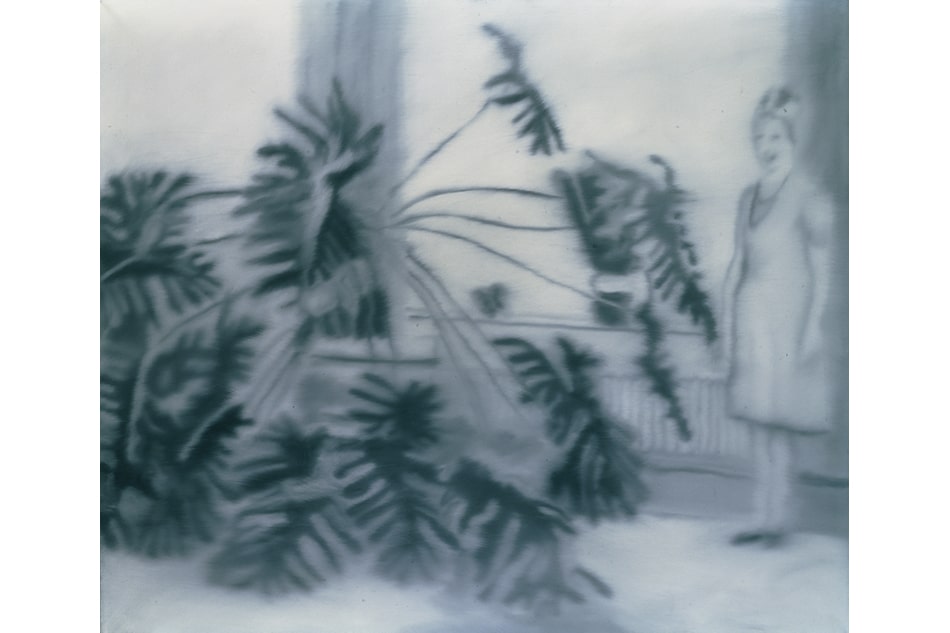 Gerhard Richter‘s 1967 Philodendron is also in the show. 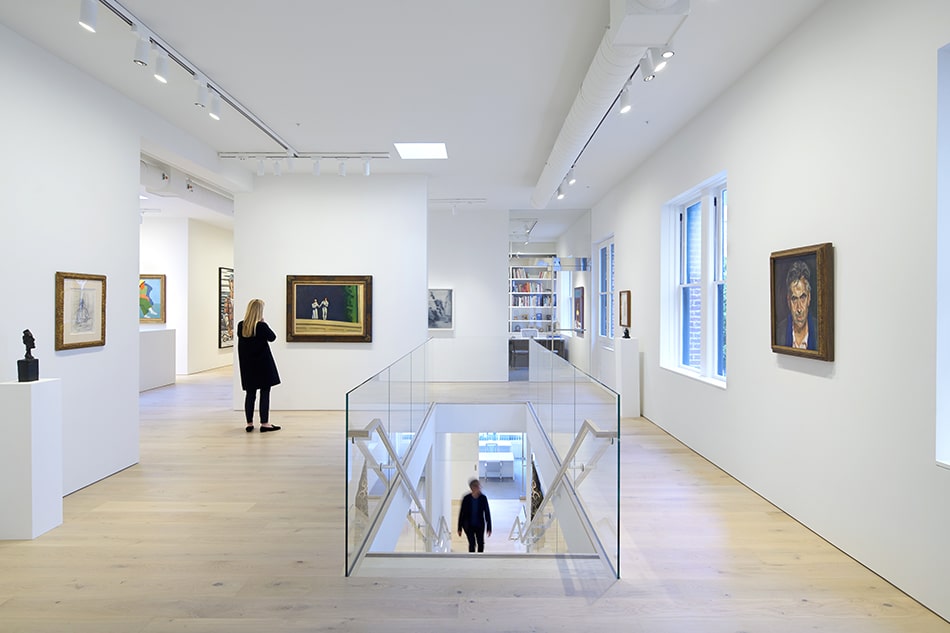 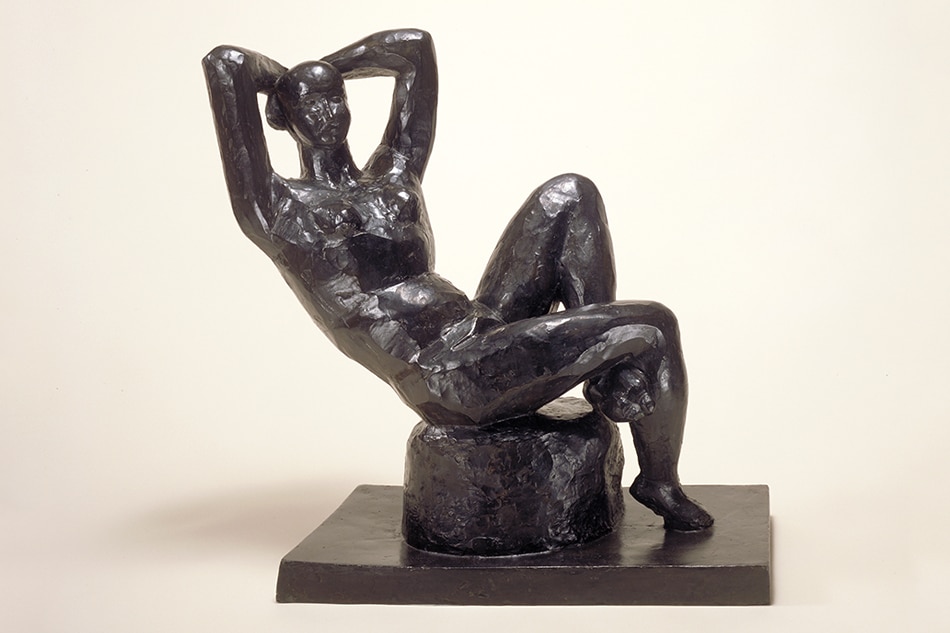 With Henri Matisse‘s Large Seated Nude (Grand nu assis), 1922–29, “The Human Form” reaches back into the early decades of the 20th century. 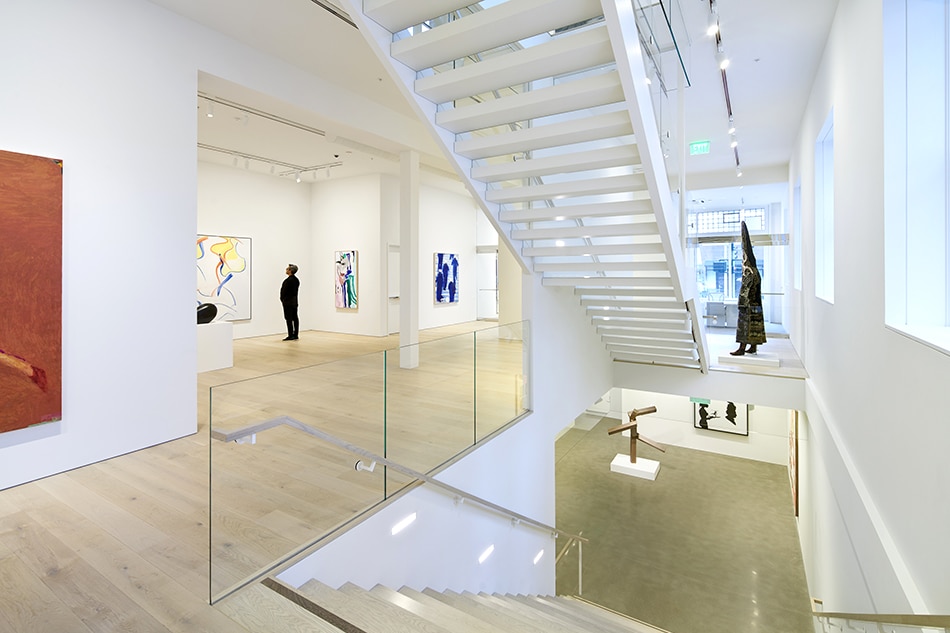 The gallery’s location on a corner allows natural light to pour into its exhibition spaces through windows on two exposures. 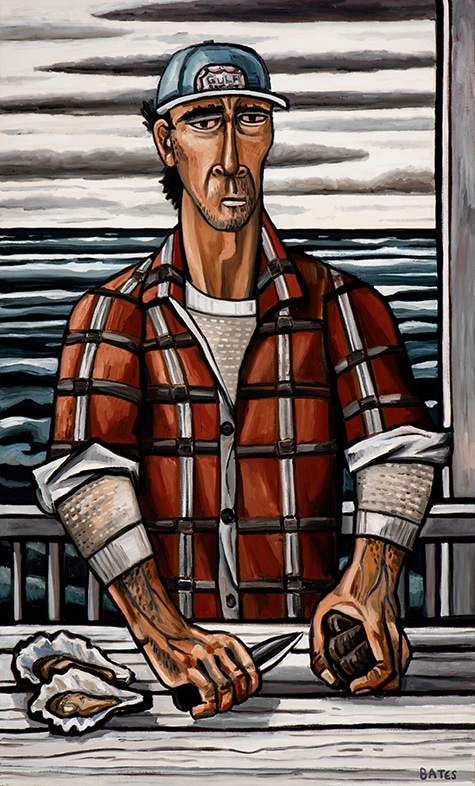 One of the most recent works in the show is David Bates‘s The Oyster Shucker, made in 2016.

They worked together for nine years while she raised the two children from her first marriage. “We had a great relationship, but it wasn’t at all romantic,” Gretchen says.

“We had a professional relationship that was solid in a non-romantic way,” John concurs. “That really helped when we did get married, in 1985. We’ve now worked together for forty years and been married for thirty of them.”

Sitting in their living room, surrounded by defining examples of the art of Richard Diebenkorn, Wayne Thiebaud, Ed Ruscha, David Hockney, Martin Puryear and other contemporaries they have represented, the Berggruens literally see the city at their feet, commanding a treetop — it feels almost cliff’s-edge — view of downtown San Francisco and the Bay.

Given this level of fulfillment and success, why, I wondered aloud, would the Berggruens, both now in their 70s, undertake a new chapter in a career already as good as unparalleled.

“You’re not the first person to ask me that,” John says. “Several times over the past five years, I walked into Grant Avenue” — his longtime former business address — “and thought, ‘You know, I’m tired of this place, tired of being on the same street. I wanted a new experience.’ At one point, I even discussed with Gretchen just having an office gallery, where I’d have works of art, meet people by appointment and so on, like Bud Holland did in Chicago — he was one of my mentors. And Gretchen said, ‘No, you’d never like that in the end.’ There was never any talk between us of retirement.”

They looked ahead to SFMOMA’s reopening and decided that its neighborhood would be the area in which to find a new venue.

“We looked for a building worth moving to for about five years, on and off,” Gretchen says. “But I wasn’t really willing to move until we completed our archive. We now have great archives, everything we’ve ever done.” Today, they can plot their entire exhibition history, trace every sale of an artwork that they’ve made — important when they want to borrow something back for a show or assist an institution with the loan of a work — and access all the critical and journalistic responses to what they’ve done. Gretchen especially views this as foundational for all the future projects they may undertake. “It’s extraordinary to see how many of our exhibitions represented the first showing of an artist in San Francisco, the first on the West Coast or the first for an artist, period. I think it’s been a real contribution to the city.” 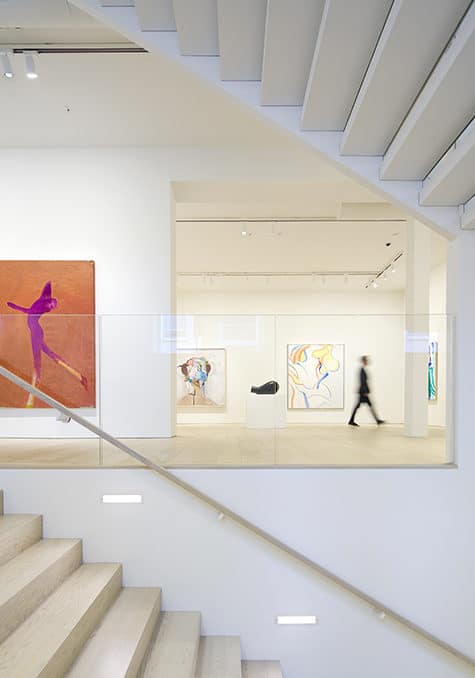 John remembers with particular pride his successful first approach to Diebenkorn. Already recognized as a giant among West Coast creatives, the artist agreed to a solo show of paintings in 1975, four years before the great museum retrospective of his drawings, which traveled nationally. In 2004, the Berggruens marked another milestone by acquiring from John’s father (in partnership with Mitchell-Innes and Nash, of New York) a portfolio of 26 late drawings by Picasso, which they went on to show, a feat that no other San Francisco gallery could have achieved. The final exhibit at Berggruen’s old address brought to the city the first solo show of paintings and drawings by acclaimed British talent Bridget Riley.

Having heard many gallerists speculate that the days of the brick-and-mortar showplace are numbered, I wondered whether the Berggruens see themselves bucking the tide by going deeper into an enlarged, fixed address. “Not necessarily,” John says. “We see what our colleagues do in New York and London, but it’s not my personality or basic metabolism to be able to sit in my home and be a private dealer. I like the energy of a gallery and being able to share works of art and exhibitions. It’s always stood us in good stead in terms of making sales, which is important.

“Art fairs and the Internet introduce us to new collectors,” John continues, “but there are those people who still like to come to a shop, without the pressure, and talk leisurely with Gretchen or me or some of our staff. I think there’s something wonderful about walking into a gallery like the new one we’re embarking upon where there are discoveries.” 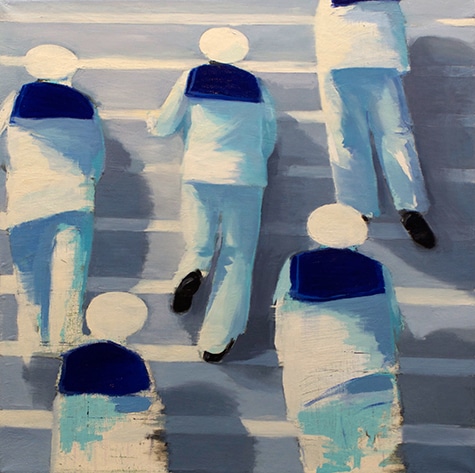 Christopher Brown‘s Sailor Steps is another 2016 work in “The Human Form.”

In their new gallery, the Berggruens plan to debut solo exhibitions by artists, including Diana Al-Hadid, Sarah Morris, Tom Sachs, Alicia McCarthy and Spencer Finch, whom they have so far only placed in private collections or in group shows. John is quick to add, however, that “we’re not disowning any of the artists we’ve worked with in the past, such as David Bates and Christopher Brown.”

The opening exhibition is a survey show titled “The Human Form” (on view through March 4), which presents a cross section of works expressing the theme its title denotes. It also evokes the Berggruens’ history of exhibiting significant artworks of the 20th century, both regional and international, and hints at paths forward in contemporary art. It includes works by Alberto Giacometti, Matisse, Edward Hopper and Willem de Kooning, among other eminent modernists, and more recent artworks by such younger contemporaries as Cecily Brown, George Condo, Antony Gormley and Kehinde Wiley.

Yet the excitement generated by the Berggruens’ reinvigorated venture plays against the background of a local economy that’s thriving at and near the top but is less and less hospitable to the creative class. “I worry very much that if you want to be the complete art and culture city that San Francisco aspires to be,” Gretchen says, “if you can’t keep artists working in reasonable proximity to the city, if not within it, and if you can’t afford to bring shows from all over the country, all over the world — and we would like our program to be more international because the art world is more international — this city really needs to decide whether it’s sophisticated enough to support quality galleries here or whether we are still provincial.”