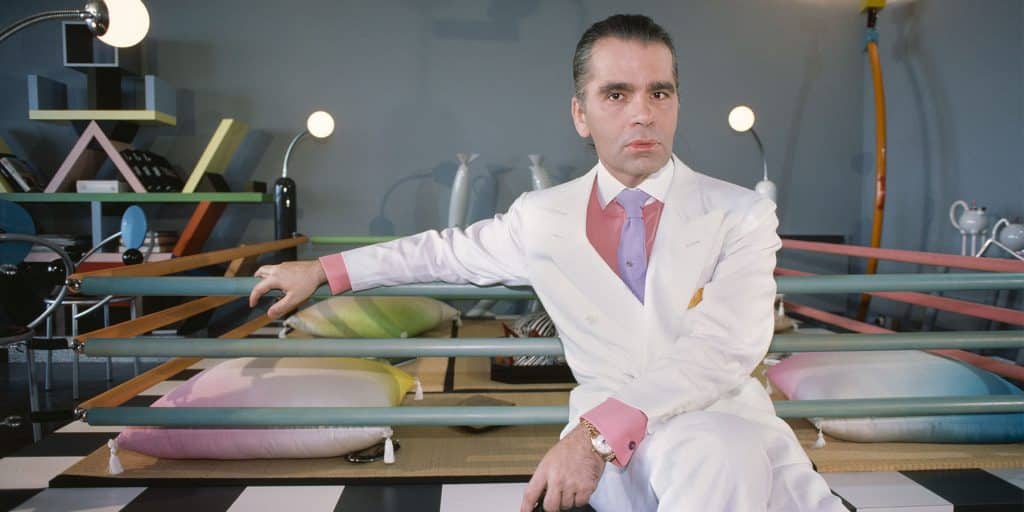 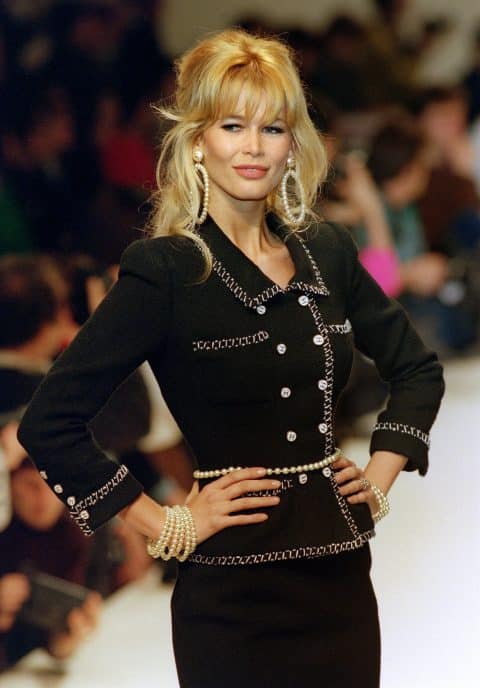 More than a mere tastemaker, Karl Lagerfeld devoted himself to the continual pursuit of chic. “My life and my job,” the designer, who died on February 19, once said, “is to forget myself.” An outsize, instantly recognizable personality — his ponytail powdered like an 18th-century viscount, his eyes perpetually shielded by dark glasses, wearing fistfuls of chunky silver jewels — Lagerfeld was, above all, an avatar of style. During his five-decade career designing for Chanel, Fendi, Chloé and many others, Lagerfeld was a quintessential chameleon, ever evolving to embody the times. That gift for malleability extended to his life as a collector of art and design, allowing him to wholly immerse himself in one era or movement before abandoning it for the next. “He represents the soul of fashion: restless, forward-looking and voraciously attentive to our changing culture,” Anna Wintour, Vogue editor-in-chief and Lagerfeld’s longtime friend, said when presenting him with the British Fashion Award for Outstanding Achievement in 2015.

Born in Hamburg (in 1933, ’35, or ’38 by varying accounts), Lagerfeld packed his bags for Paris in 1954. His design for a coat won him the International Wool Secretariat and landed him a job with the celebrated couturier Pierre Balmain. He went on to become the designer of Jean Patou, eventually realizing that his seemingly endless ideas could fuel a career as a designer-for-hire. As such, Lagerfeld lent his vision to everyone from Loewe and Max Mara to Krizia and Charles Jourdan, nimbly moving among a diverse range of styles. It was an unprecedented way of working in the days when freelance was still a dirty word. During the late ’60s and ’70s, he refashioned Chloé to reflect the free spirit of the day and, beginning in 1965, joined forces with the Fendi family, taking it from sleepy furrier to fashion’s haute-est stratum. 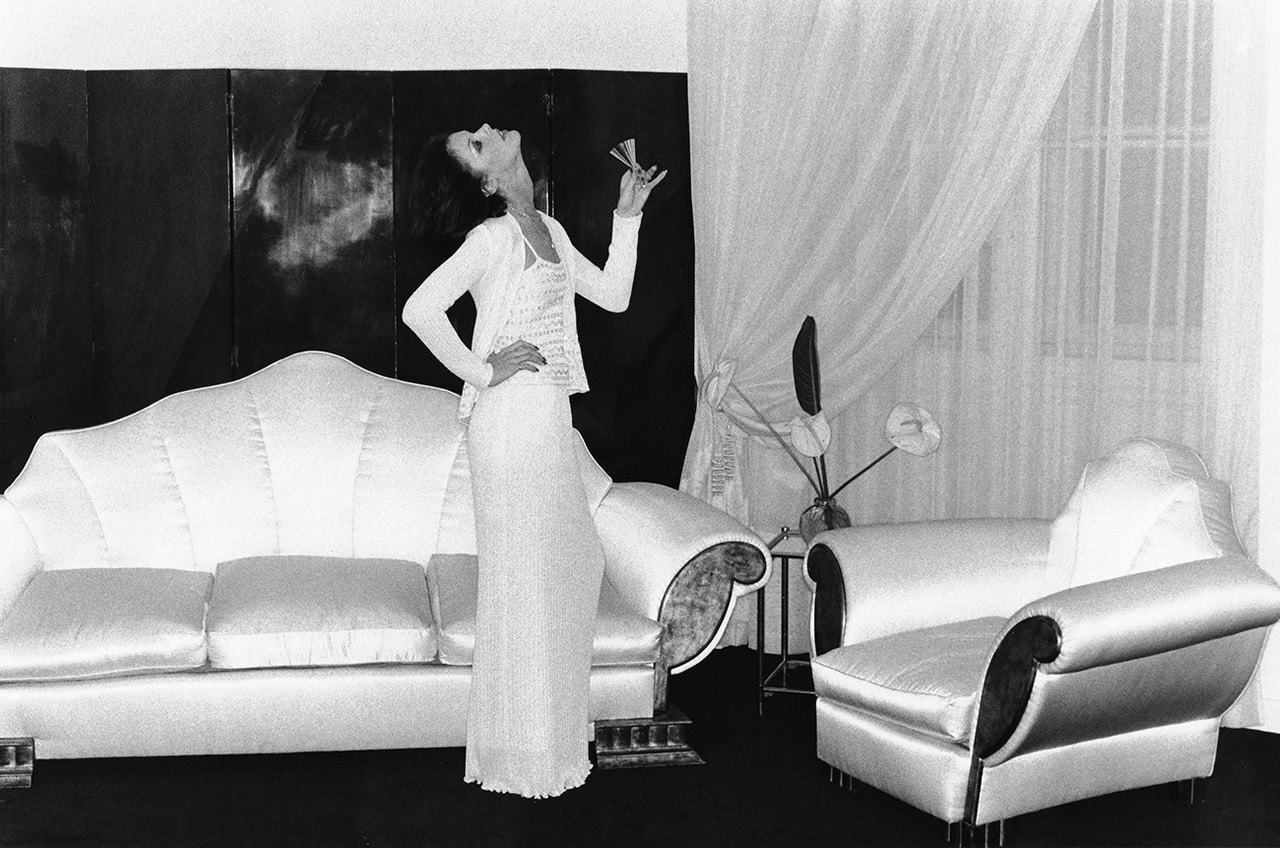 Because of his track record for reviving and reimagining brands that had grown stagnant, in 1984 Lagerfeld was handed the reins at Chanel, which had been gathering dust since its founder’s heyday. From his first collection, Lagerfeld injected the venerable house with a frisson of modernity. He riffed on its iconography — tweed skirt suits, pearls, camellias — accenting a lexicon of Chanel-isms with tastes of the moment. “His great talent was his ability to identify, articulate and frequently anticipate changes in the zeitgeist,” says Andrew Bolton, Wendy Yu Curator in Charge of the Metropolitan Museum’s Costume Institute. “Effectively, he invented the language of late twentieth- and early twenty-first-century fashion.” 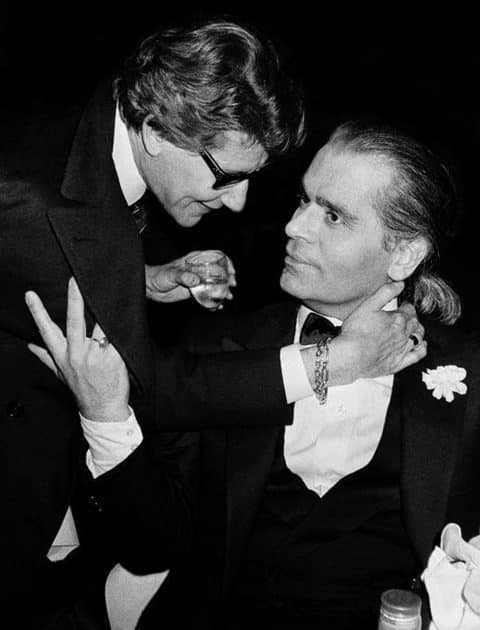 Despite producing eight collections a year for Chanel, as well as four to five for Fendi, Lagerfeld never faltered in proposing new ideas each time he put pencil to paper. “His knowledge was encyclopedic and omnivorous,” recalls Amy Fine Collins, who first met Lagerfeld in the mid-1990s when profiling him for Vanity Fair. “Condensed into all his designs was a comprehensive familiarity with civilization and culture of all periods. Although he was continually looking into the future, and hyperaware of the present, his work always revealed his easy fluency with the past.”

The results transcended seasonal trends and quickly rose to the status of cult collectibles, enabling Chanel to grow into a multibillion-dollar business. “It’s no surprise that nineteen-nineties Chanel continues to be highly coveted some thirty years later,” says vintage fashion dealer Kiyana Roberson, of Newfound Luxury. “We field inquiries from collectors the world over requesting Chanel costume jewelry and handbags from this era, and I don’t see that changing anytime soon.” 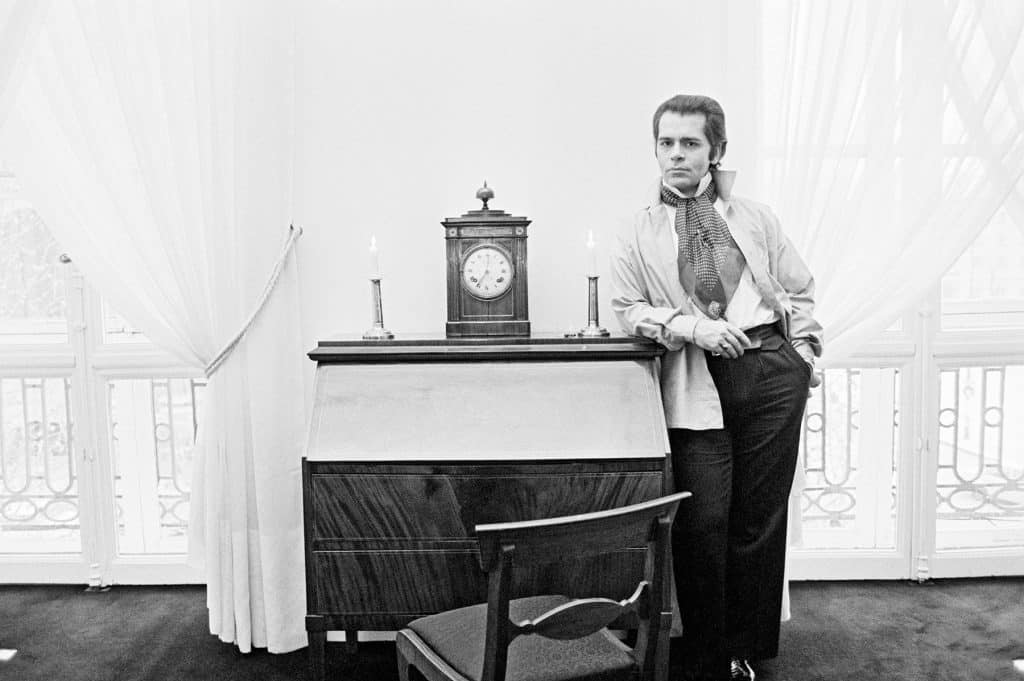 Lagerfeld stands in his Paris apartment in this undated image. Photo by Jacques Pavlovsky/Sygma via Getty Images

Although he was on a ceaseless hunt for novelty, Lagerfeld delved into the past with equal aplomb. An avid scholar of aesthetics, Lagerfeld collected everything from Old Master paintings to Belperron jewelry to Memphis furniture, amassing collections that rivaled those of the finest museums. Observes Arie Kopelman, who served as Chanel’s president and COO from 1986 to 2004, “There are three things it takes to be a great collector: knowledge, taste and money. Karl had all three in great abundance.” By the mid-’90s, Lagerfeld had his treasures spread across seven homes in four countries. He owned an estimated 250,000 books; the weight of his Paris apartment’s library once caused the floor to collapse, sending tomes plummeting into the level below. Ever the bibliophile, Lagerfeld founded a bookshop, 7L, on the rue de Lille in Paris in 1999. 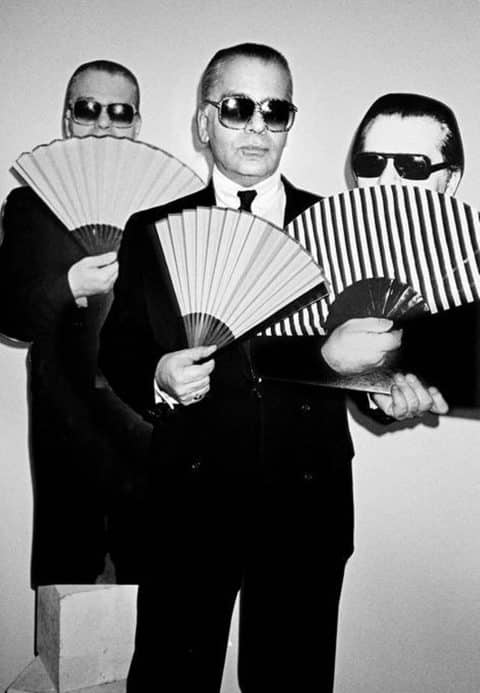 Lagerfeld collected with the same laser focus he brought to his work. It is evident already in the 1970s, in his Art Deco apartment on Paris’s rue de l’Université brimming with works by Eileen Gray, Jean Dunand and Émile-Jacques Ruhlmann. Later, all remnants of Deco were banished in favor of Louis XV extravagance, with Lagerfeld sleeping in a bed once owned by Madame de Pompadour. In the early 1980s, his Monte Carlo apartment, designed by Andrée Putnam, was conceived as a shrine to the postmodern effervescence of Memphis Milano. In 1991, its contents were sold off in a sale at Sotheby’s.

Keith Johnson, of Urban Architecture, a dealer specializing in Memphis, purchased some 20 pieces from that landmark sale, including a group of Riviera chairs by Michele De Lucchi and Michael Graves’s Plaza vanity. “It was a scholarly approach,” Johnson says of Lagerfeld’s curation. “The moment a new, revolutionary movement like Memphis came along, he immediately recognized it, far earlier than anyone else, and jumped into it in great depth.” Lagerfeld’s collection, and its sale, bolstered Memphis’s status as an important design movement. “Because of his imprimatur,” Johnson recalls, “immediately after that auction, Memphis sales skyrocketed.” 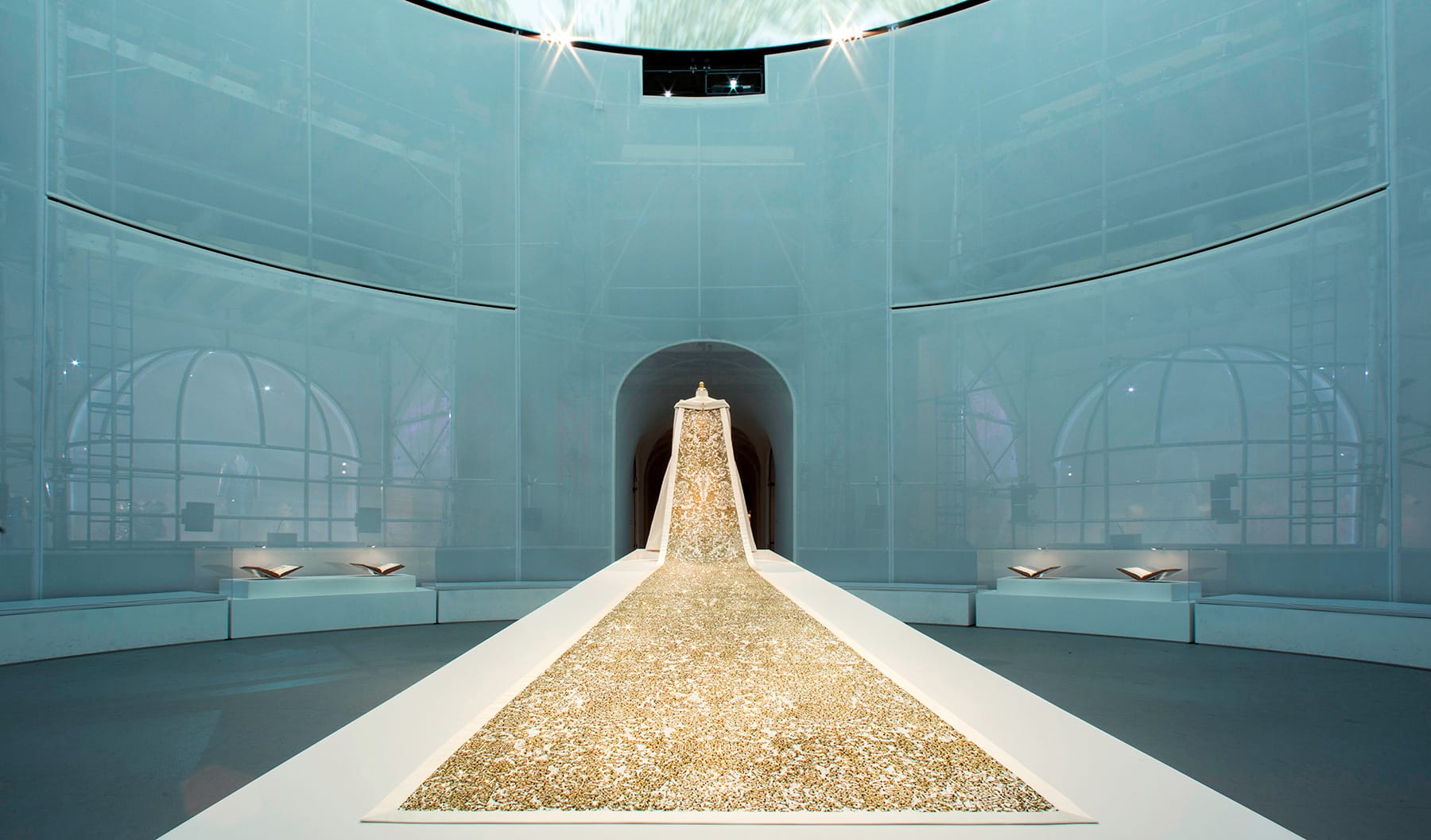 A Chanel wedding ensemble on display at the Metropolitan Museum’s Costume Institute during the spring 2016 exhibition “Manus x Machina.” According to the Met, Lagerfeld described the dress as “haute couture without the couture,” because it was hand molded, machine sewn and hand finished.

That wasn’t the only time one of Lagerfeld’s collections hit the auction block: A Christie’s sale in 2000 contained 400 lots of the designer’s Old Master works and antique furniture by such greats as Jean-Henri Riesener and Pierre Boulle; a Sotheby’s sale in 2003 featured 240 pieces of his blue-chip Art Deco furnishings. While most collectors spend their lives gradually building and evolving their collections, Lagerfeld was unsentimentally efficient. “His apartments have been a series of successful sincerities,” Putman told Vogue in 1983. “He goes to the end of an obsession for each place: and then he gets rid of stuff.” 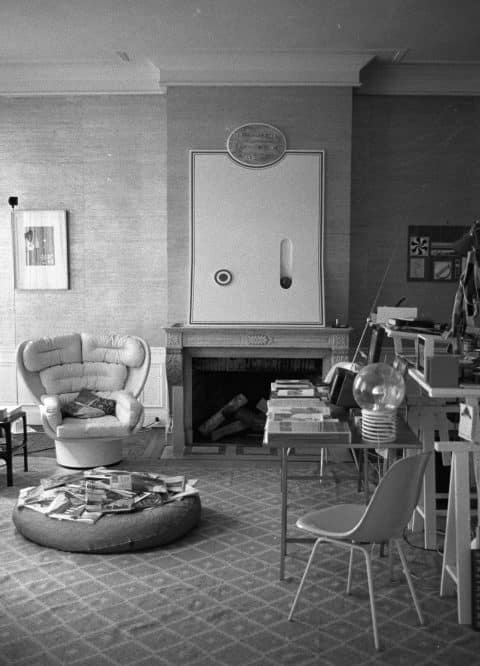 Just as every fashion collection saw Lagerfeld jumping off from a new point of inspiration, each space offered him an opportunity to explore a different aesthetic obsession. His Rome apartment was Wiener Werkstätte; his Fontainebleau château was Gustavian; his John Pawson–designed New York pied-à-terre was Deutscher Werkbund. Although the speed with which Lagerfeld embraced and abandoned styles may suggest a serial dabbler, it was simply a byproduct of his unflinching eye for the next big thing. In his book Catwalk, Patrick Mauriés quotes Lagerfeld as saying : “The most important piece of furniture in a house is the garbage can! I am supposed to do, I’m not supposed to remember.”

In recent years, the designer set his sights firmly on the here and now. In a 2003 interview, he told Point de Vue: “I create dresses for today, and therefore I must live in a decor of today.” For Lagerfeld, that meant trading Martin Carlin and Jean-Michel Frank for Mark Newson and the Bouroullec brothers. In 2008, he commissioned Zaha Hadid to design the Chanel Mobile Art Pavillion, a sleekly futuristic structure that traveled the world displaying artworks inspired by the brand’s iconic quilted handbag. That same year, he moved into a new Paris apartment that echoed Hadid’s architecture: all glass, metal and cutting-edge tech. Here, Lagerfeld’s decor strictly featured works of contemporary design, including an Amanda Levete sofa and Barber & Osgerby tables from Established & Sons. 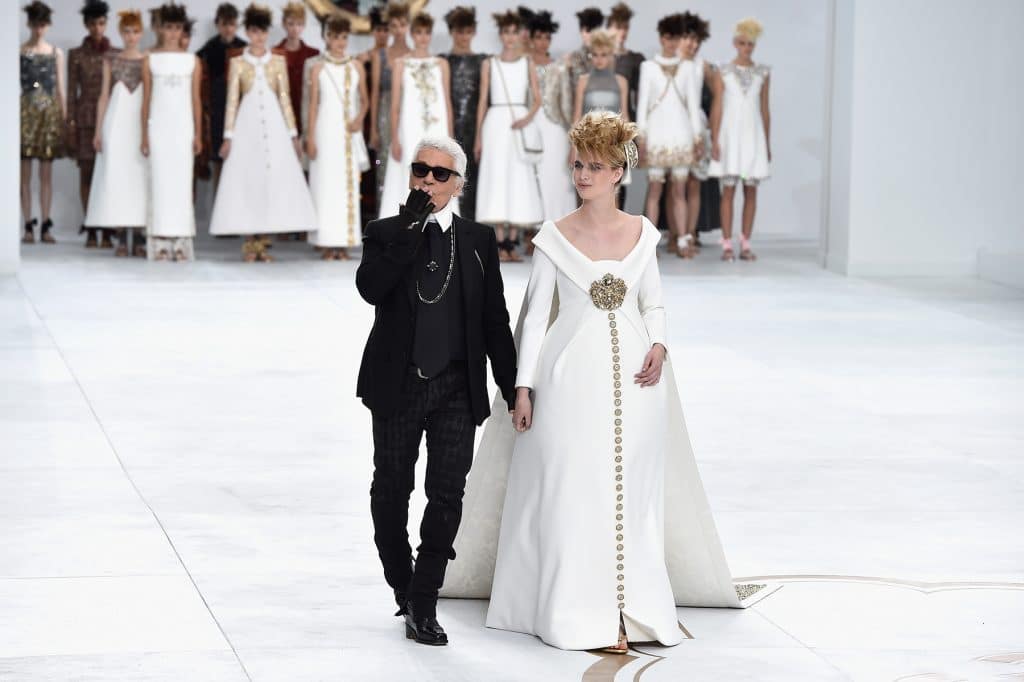 Lagerfeld and model Ashleigh Good walk the runway at the conclusion of the Haute Couture Fall/Winter 2014–15 Chanel show at the Grand Palais during Paris Fashion Week. Good is wearing the dress that was later featured in the Met’s “Manus x Machina” exhibition. Photo by Pascal Le Segretain/Getty Images

It’s fitting that Lagerfeld’s lifetime of collecting culminated with a temple of modernity. With all the many personas Lagerfeld inhabited over the years, the one constant was his desire to transmit the pulse of his time and place. “He taught me to be perpetually inventive,” Darré reflects. “He was always drawing at full speed, always a new, blank page to begin again.”