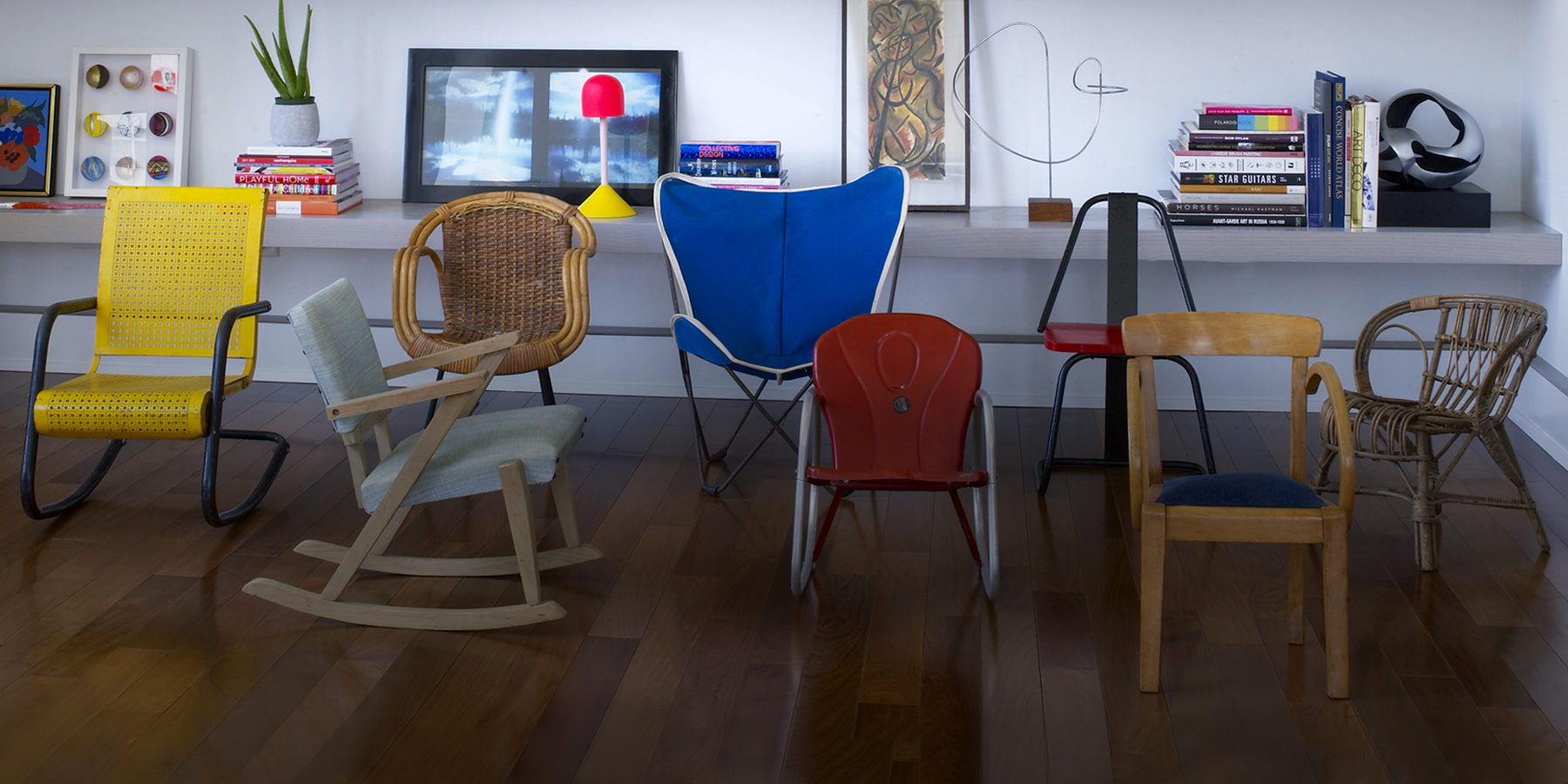 The New York shop Kinder Modern specializes in 20th-century design for the junior set, stocking a stellar selection of children’s-sized furniture and objects by such prominent architects and designers as Hans Wegner and Friso Kramer.

by Stephanie Vanamee | photos by Alexandra Rowley May 21, 2014 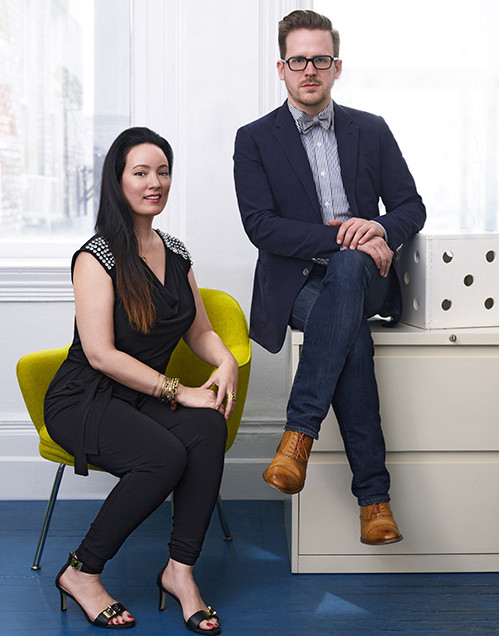 Lora Appleton and Bachman Brown Clem founded Kinder Modern, seen above, in 2012. Prior to that, Appleton ran a design studio called Edge Lab and Clem worked as an interior designer, which he still does today.

It’s a chilly spring morning in New York, and Lora Appleton and Bachman Brown Clem, owners of Kinder Modern, a gallery specializing in vintage children’s furniture, are buzzing around the small space near Madison Square Park that serves as both their showroom and an office for Clem’s interior design business. Checking her phone now and again, Appleton rearranges the pint-size furniture on the shelves that line one wall, furiously tossing her long chestnut hair from one side to another, and Clem fiddles with his bow tie (he likes it slightly off center), poking fun at his partner — and at himself. It doesn’t take much for him to crack through her steely façade and reduce her to giggles.

Appleton and Clem first met in 2007, when she hired interior designer Amy Lau to revamp her grandmother’s apartment on Central Park South. A design fanatic and, in her own words, “not easy to work for,” Appleton oversaw the project, working closely with Clem, who was Lau’s assistant at the time.

Five years later, the two reconnected. By then, Clem had struck out on his own, launching Bachman Brown Designs, and Appleton had just returned from London, where she had been on tour with her husband, rock musician JJ Appleton. The couple now had a son, Willem, and had recently bought an apartment in Tribeca. Excited to collaborate again, Appleton hired Clem to help her decorate. 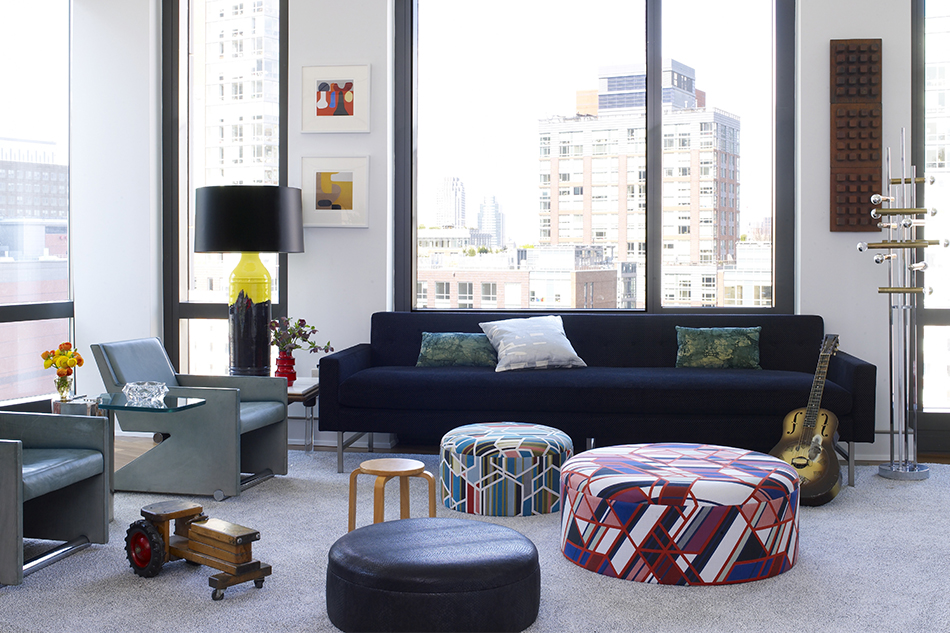 In Appleton’s own Tribeca living room, decorated by Clem, a child’s stool by Alvar Aalto fits in seamlessly with custom ottomans and a Gaetano Sciolari floor lamp. 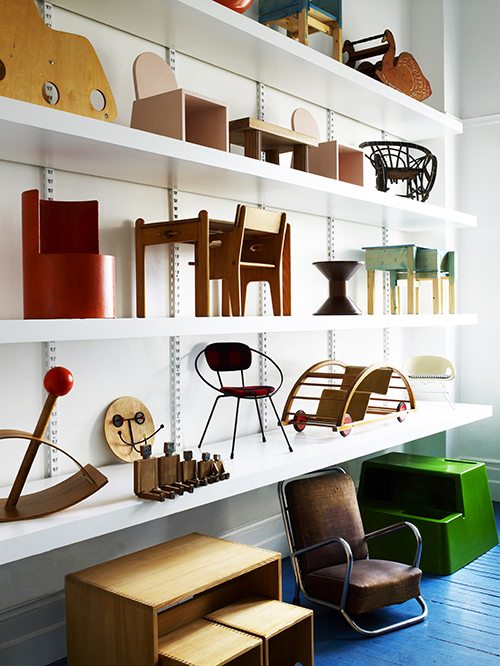 The by-appointment showroom, located just west of Madison Square Park, is stocked with all manner of kid-friendly vintage finds.

With a shared passion for vintage furniture and beautiful yet livable spaces, they found that working together again was a dream. “And then one night, I get the call,” laughs Clem, a Texas native. They’d been sourcing furniture for Willem’s room and were looking for unique alternatives to the mass-produced children’s furniture that floods stores today. Clem continues: “Lora said ‘We should start a gallery that specializes in twentieth-century children’s furniture.’ And what did I say? ‘It’s f-ing brilliant,’ that’s what I said.”

From there, things moved quickly. Taking buying trips to France, the Netherlands and England, among other places, Appleton and Clem pieced together a collection. The result is a range of furniture and objects, most of it designed specifically for children either by architects or furniture designers. “What I’ve learned in my research is that a lot of these pieces really came from the hearts of these designers,” says Appleton. For example, Hans J. Wegner’s Peter chair and table, made in 1944, were a gift for Wegner’s close friend and fellow designer Børge Mogensen when his son was born. Other pieces, like the Toucano lamp, designed in the late 1960s by Steven Scarloff, weren’t expressly made for children yet have a whimsical, kid-friendly feel.

One of Clem’s favorite pieces, a “teeny tiny rope chair from the nineteen sixties,” was in pristine condition when they bought it from a New York estate not long ago. While they’re grateful for the finds that seem unused, Clem and Appleton are big on the idea of their clients really living with the pieces they buy. “I feel strongly about design for living, not design for a pretty picture,” says Clem, who incorporates the gallery’s pieces into the homes of many of his clients who have children. 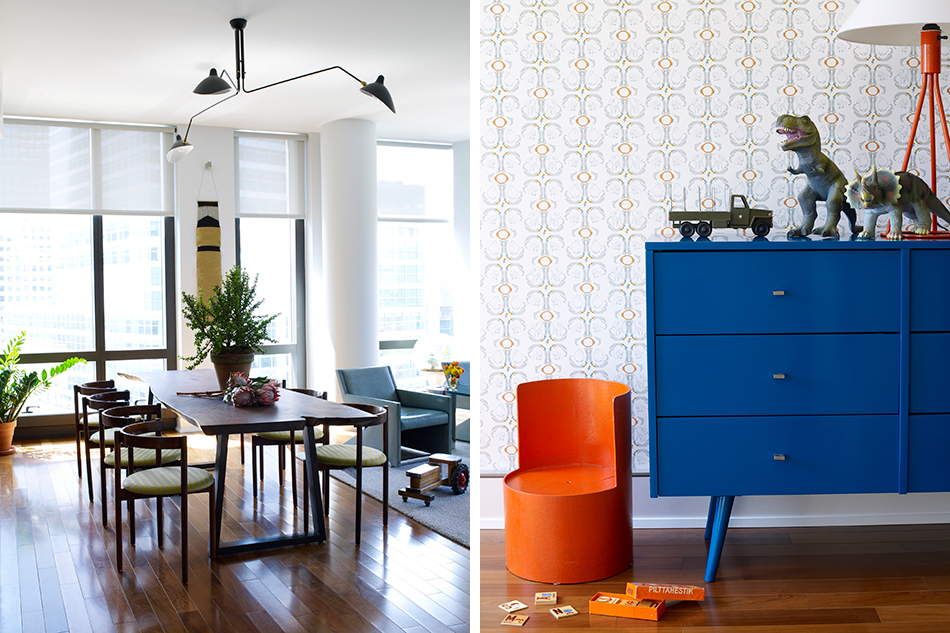 Left: In the dining room of Appleton’s home, a Serge Mouille lighting fixture hangs above a table from Brooklyn-based Uhuru Design. The vintage toy tractor dates from 1960 and is available through Kinder Modern. Right: In the bedroom of Appleton’s son, Willem, an orange Tomotom chair by Bernard Holdaway sits beside a Paul McCobb dresser. 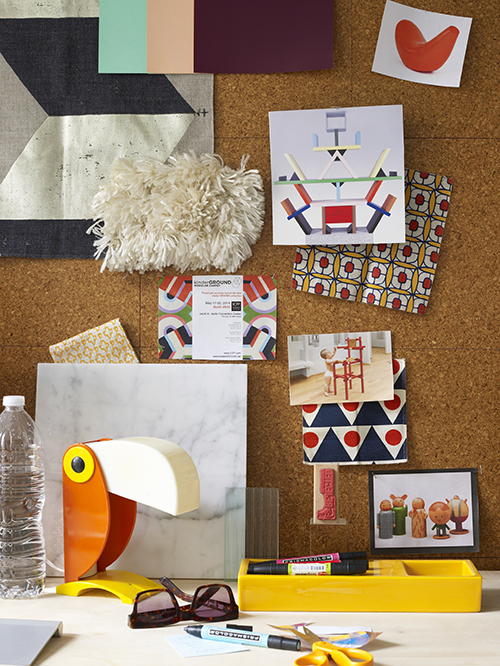 A cheerful Toucano lamp by Steven Scarloff for OTF Verona, Italy, made in the late 1960s or ‘70s, brightens a desk in the showroom. Kinder Modern stocks both items specifically for children as well as pieces that might appeal to them.

And rarely does a piece make it to the showroom floor without first getting approval by Kinder’s resident tester: Willem, now four. “He is always around the inventory, and he’s really curious. ‘Where did you get this, mommy? What is it for? What is it made of?” says Appleton, noting that having the pieces around the house provides an early hands-on lesson in design history for little ones.

Last fall, the Brooklyn Museum acquired four of Kinder Modern’s pieces. “We got a mention in the New York Times when we first opened, and soon after we got a ring from Barry Harwood, the decorative arts curator,” says Appleton. “He’s a collector of children’s furniture himself and has become a real champion of ours.” The pieces will be on display at the museum later this year. And anyone who visited the high-profile design fair Collective 2 two weeks ago couldn’t have missed the gallery’s colorful corner booth.

As the business grows and Clem and Appleton become even more familiar with the market, Kinder Modern is expanding in new directions. At New York’s recent International Contemporary Furniture Fair, they debuted Kinder Ground, a kid-friendly modular carpet system in 37 styles. “I have never seen more amazing ideas come out of one person,” says Clem of his partner. “We have lines of lighting we want to do, furniture, you name it, she’s got ideas. I can’t keep up!”

TALKING POINTS
Appleton and Clem shares their thoughts on a few choice pieces. 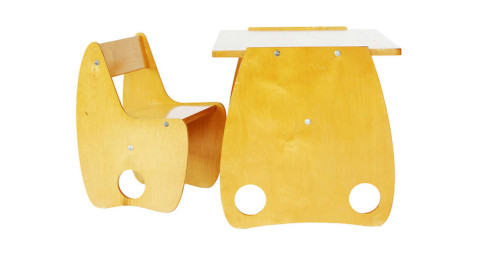 The lines of this piece are so playful, but they still have a sophisticated feel. Postwar German architects Albrecht Lange and Hans Mitzlaff were known for their groundbreaking furniture design, especially chairs. It certainly would fit well in a child’s room, but we could also see the chair with a stack of books on it elsewhere. 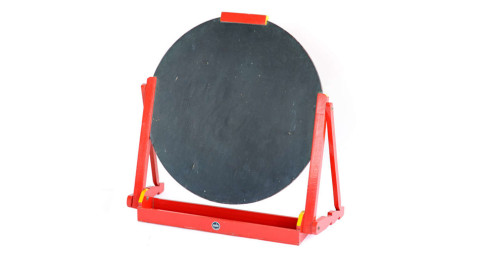 This blackboard’s austere form and bright primary palette caught our eye. Dutch designer Ko Verzuu, head of the Netherlands’ ADO Workshops from the 1930s to the ’50s, had a team mostly made up of patients at a nearby sanatorium that helped the mentally ill transition back into mainstream society – an unusual arrangement that resulted in some very interesting designs. 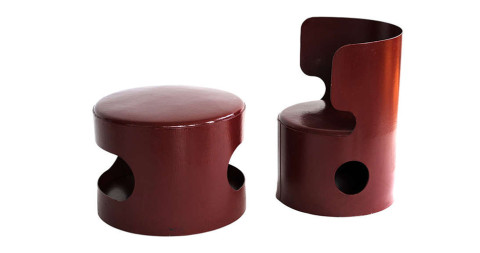 We love the materiality of this item. Avril designed a very prolific collection of cardboard items that were produced in his stepfather’s factory in Loiret, France, between 1966 and 1974. The strength of this material is impressive, and the colors and shapes are quite novel for the time. One of Avril’s gifts was his ability to make his furniture playful while keeping it extremely elegant. 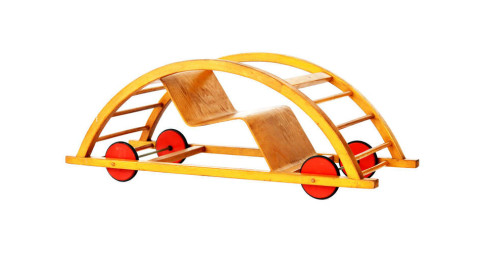 The Brooklyn Museum acquired this piece from us, but we were then able to locate a second one. It’s a mixed-use item: a rocker in the shape of a car, and when flipped over it becomes a pedal car. The genius is really the molded-plywood seat that can be used from both sides. 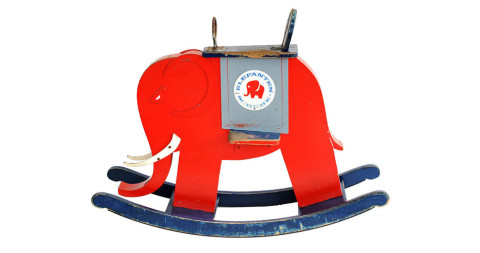 With its De Stijl–inspired design, this rocker is phenomenal. We see a ton of rocking horses and other animals, but rarely do we see such an amazing piece of this scale. We found it in the Netherlands, but it’s actually German and was most likely used as a store prop for the shoe company Elefanten Schuhe. Countless people have told us that they recall it from their childhoods. It’s sturdy and able to be used. 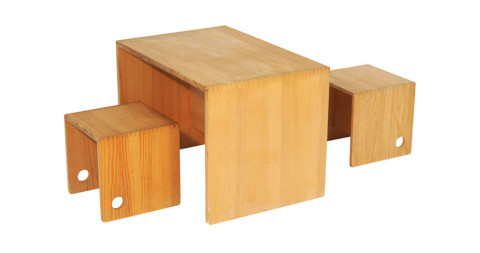 Made in Switzerland, this set features a table and two stools made of spruce wood. Each piece showcases Bill’s unique interlocking joinery technique and is hand-signed by the designer himself. We were thrilled to discover this rare piece at auction.