King Tut Returns — in the Biggest Exhibition Yet 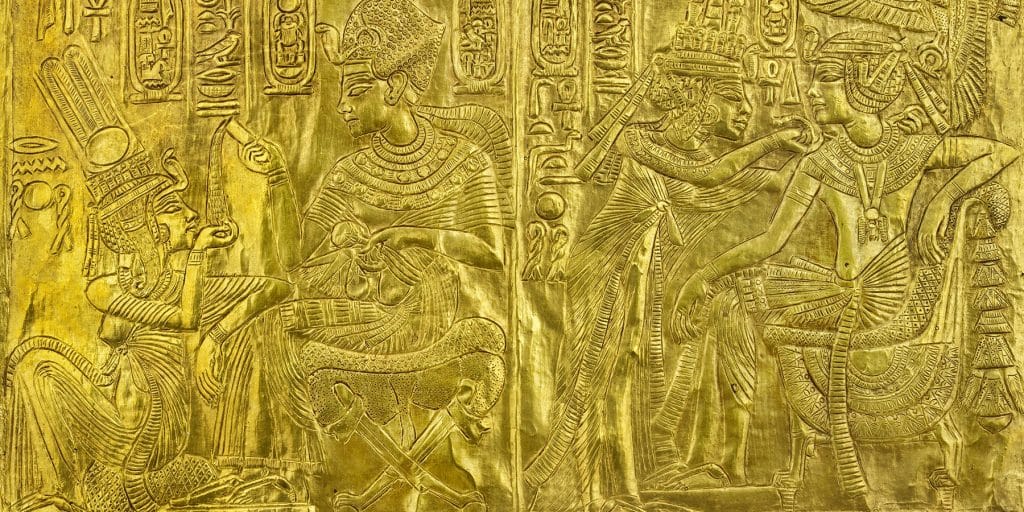 Treasures — 150 of them — from the boy king's tomb are on display in an international tour that will likely be the last time they leave Egypt. 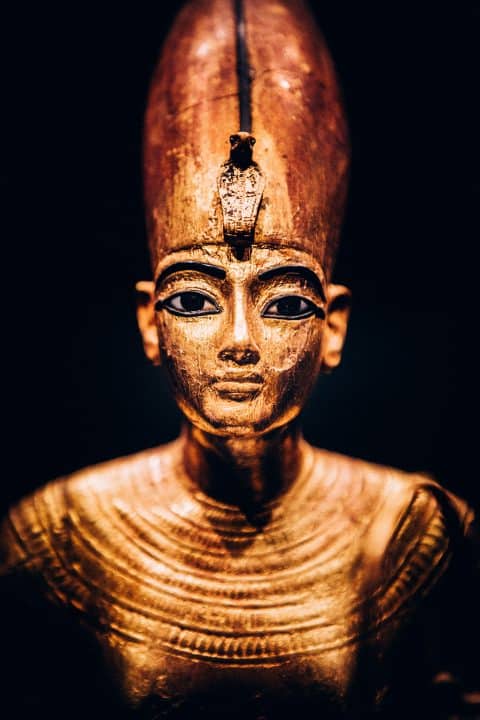 October 14, 2018“Treasures of the Golden Pharaoh,” at the California Science Center, features 150 artifacts from the tomb of the pharaoh Tutankhamun, which was discovered in 1922 (photo by IMG). Top: Detail of a gilded wooden shrine that depicts scenes from the daily life of of King Tut and his wife, Ankhesenamun. (photo by ©Laboratoriorosso, Viterbo/Italy).

But nothing could match the mania that followed the almost-accidental find in 1922 of Tutankhamun’s tomb in the Valley of the Kings. In the nearly 100 ensuing years, our fascination with Egypt has exploded, moving from academia to nearly every aspect of modern art, design and culture.

To celebrate the centennial of Tut’s unearthing, the California Science Center, in Los Angeles, is presenting “Treasures of the Golden Pharaoh” through January 2019. The monumental exhibition contains more than 150 artifacts and gold pieces, the largest gathering of objects from Tut’s tomb ever on public display outside Egypt. (By comparison, New York’s Metropolitan Museum of Art showcased 53 Tut treasures in its late-1970s exhibition, which recreated the excitement surrounding the tomb’s discovery and welcomed more than 8 million visitors, ushering in the modern age of the museum blockbuster.) The items are likely never to travel again once they return to their permanent home in the new Grand Egyptian Museum, currently under construction in Cairo.

“Treasures of the Golden Pharaoh” reminds us why the dazzling world of ancient Egypt continues to inspire. The display features exquisite rings found on Tut’s fingers, gem-encrusted body jewelry and gold sandals, as well as items the young king used in life, like elaborate carvings, sculptures and ritual objects.

Here, the California Science Center’s senior vice-president of exhibits, Dr. Diane Perlov, talks to Introspective about show highlights, such as Tut’s gilded ceremonial bed, perched high on beautifully gilded lion legs, and the ornate canopic vessels that held his mummified organs (the heart was to be weighed against the feather of maat, or “truth,” in the afterworld). 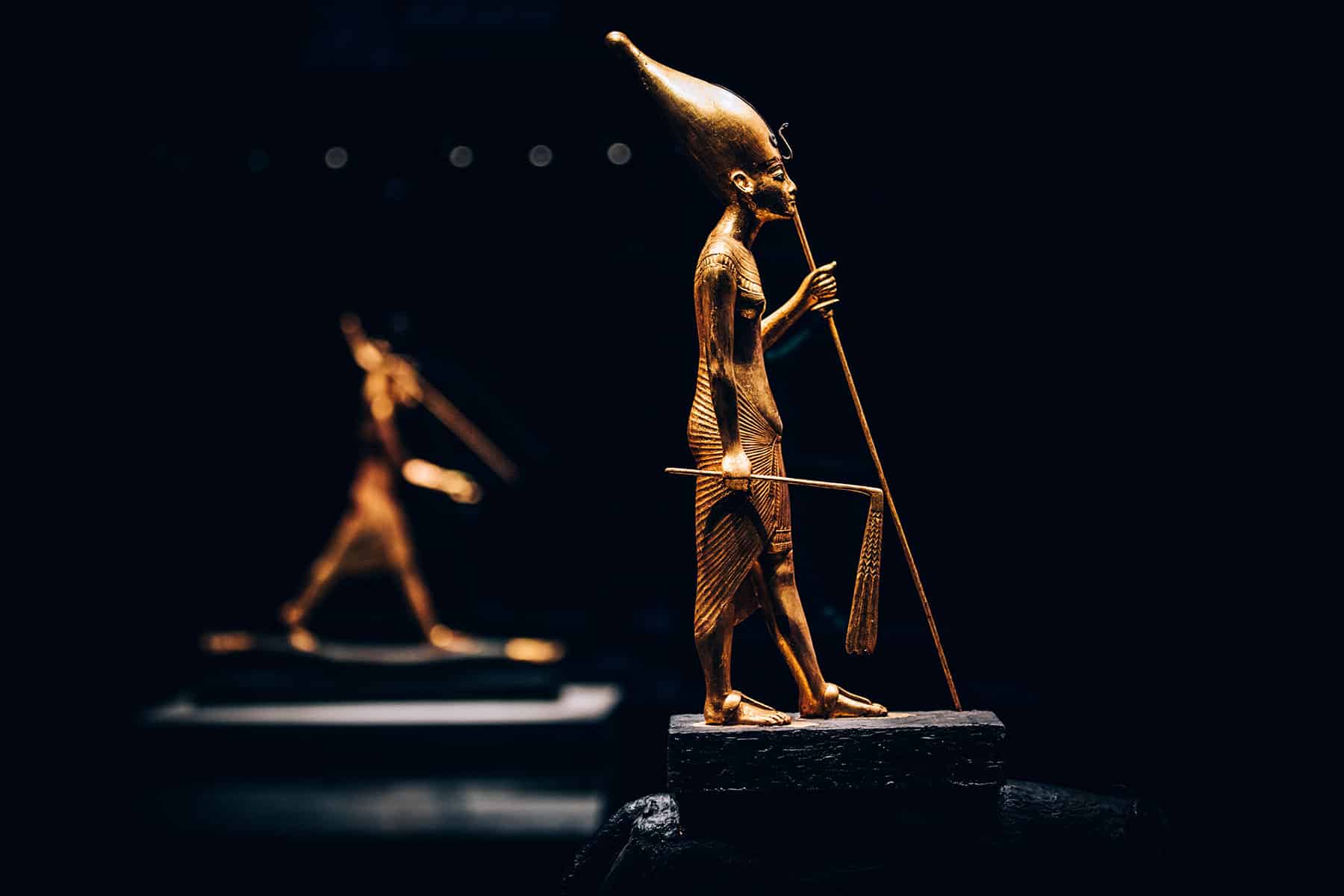 Gilded statues of King Tut are featured in the exhibit. Photo by IMG

Tut first visited California in the 1970s, attracting more than one million visitors to Los Angeles County Museum of Art — a record at the time. In 2005, nine hundred thousand people stood in line at the museum to see his tomb. Why again and why now?

This is the first leg of a ten-city, seven-year international tour. We are first in marking the centennial of British archaeologist Howard Carter’s discovery of the best-preserved tomb ever. The window his find opened onto ancient Egypt was groundbreaking, on historical, design and technological levels.

Is this the same old Tut-mania?

Not at all. First, previous Tut shows always added non-tomb Egyptian artifacts for context, because access to many of the tomb items was limited. The most Tut items ever shown was around fifty. Here, we have three times that, and all but one come directly from the five thousand key items recovered by Carter. 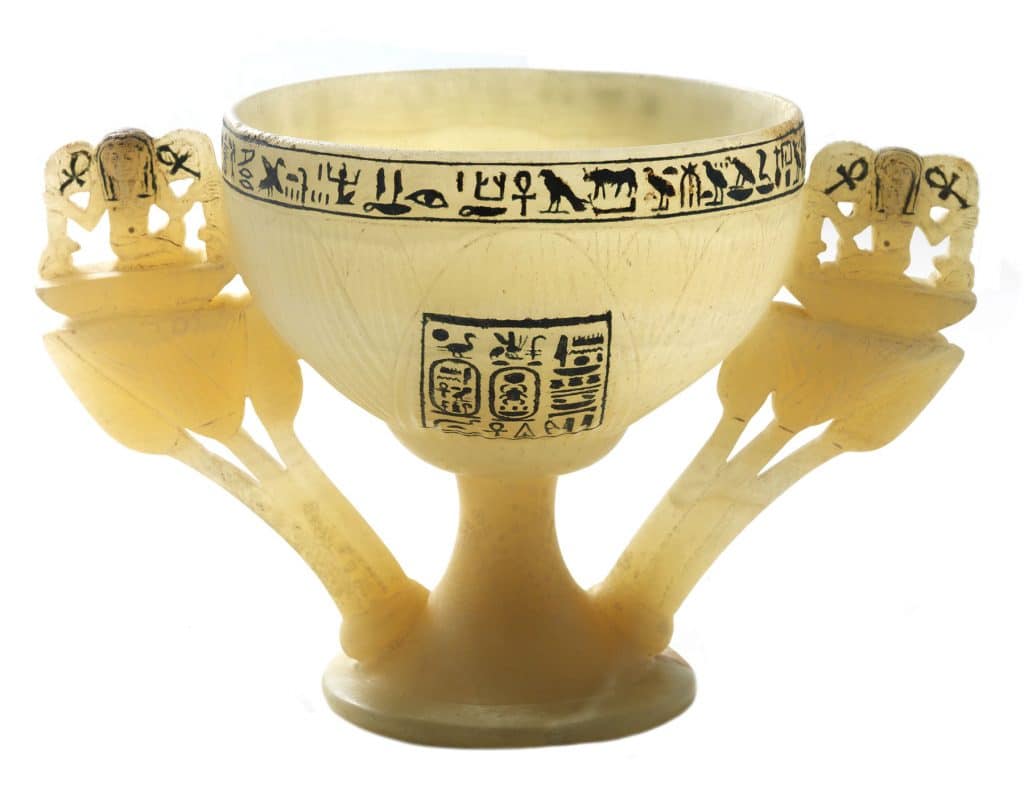 An alabaster chalice in the shape of a lotus, known as King Tut’s wishing cup. Photo by ©Laboratoriorosso, Viterbo/Italy 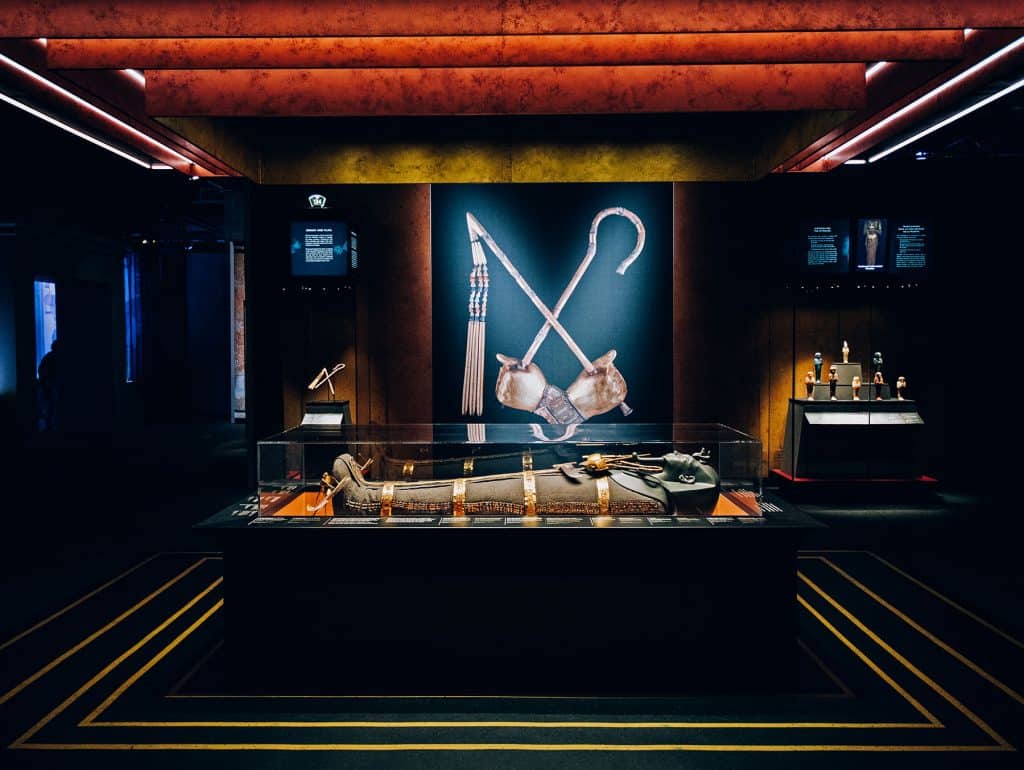 The mummy room in the “Treasures of the Golden Pharaoh” exhibition. In the background is a blown-up image of the crook and flail that are in a display case in the same room. In front is a reproduction of Tut’s mummy decorated with the actual gold bands covering the real one. The lines on the floor show how many sarcophagi encased the mummy. Photo by IMG 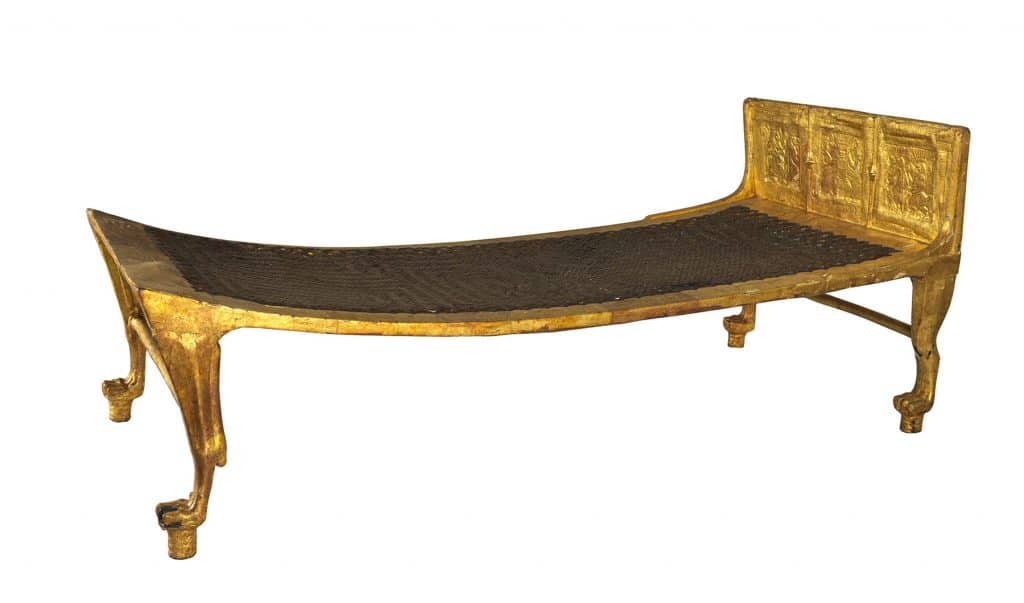 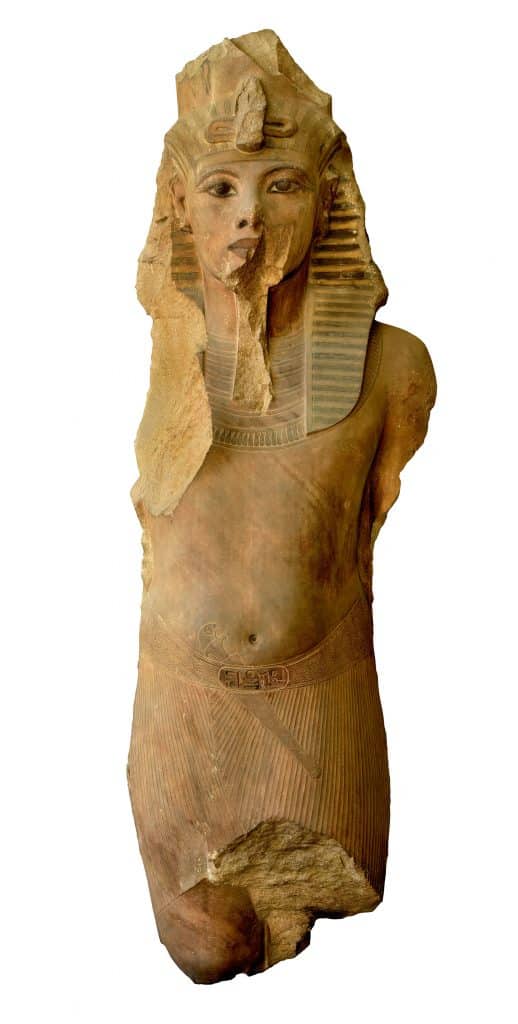 This quartzite statue of Tut is the only artifact in the show that was not in the actual tomb. The pharaoh who succeeded the young king removed his name from the belt around the figure’s waist and replaced it with his own. Photo by ©Laboratoriorosso, Viterbo/Italy 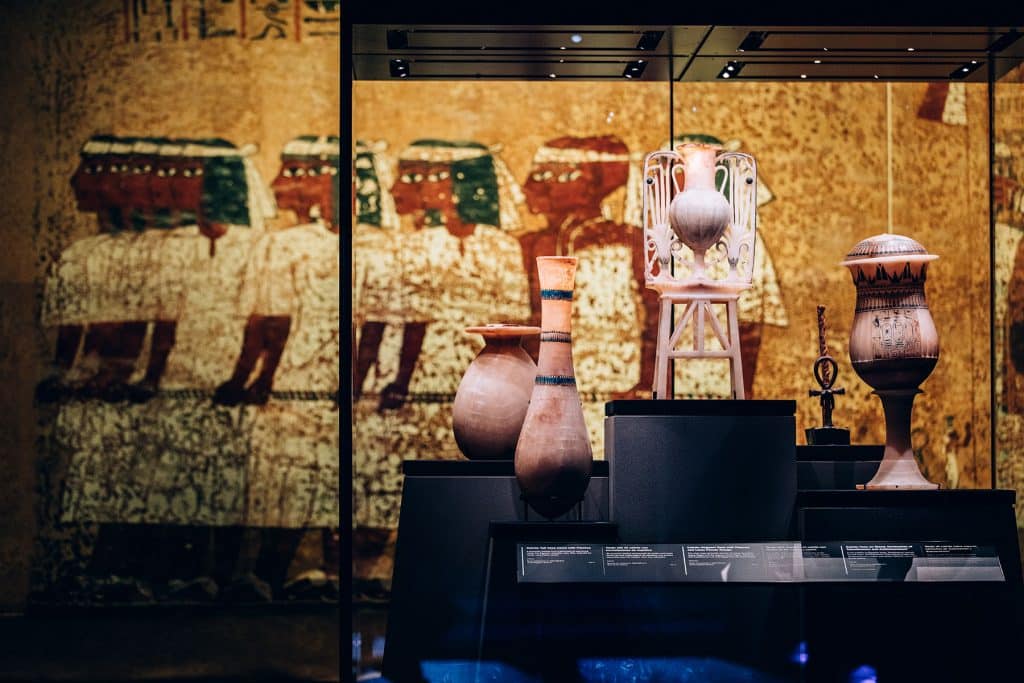 Calcite vessels are displayed in front of reproduced scenes from inside the tomb. Photo by IMG 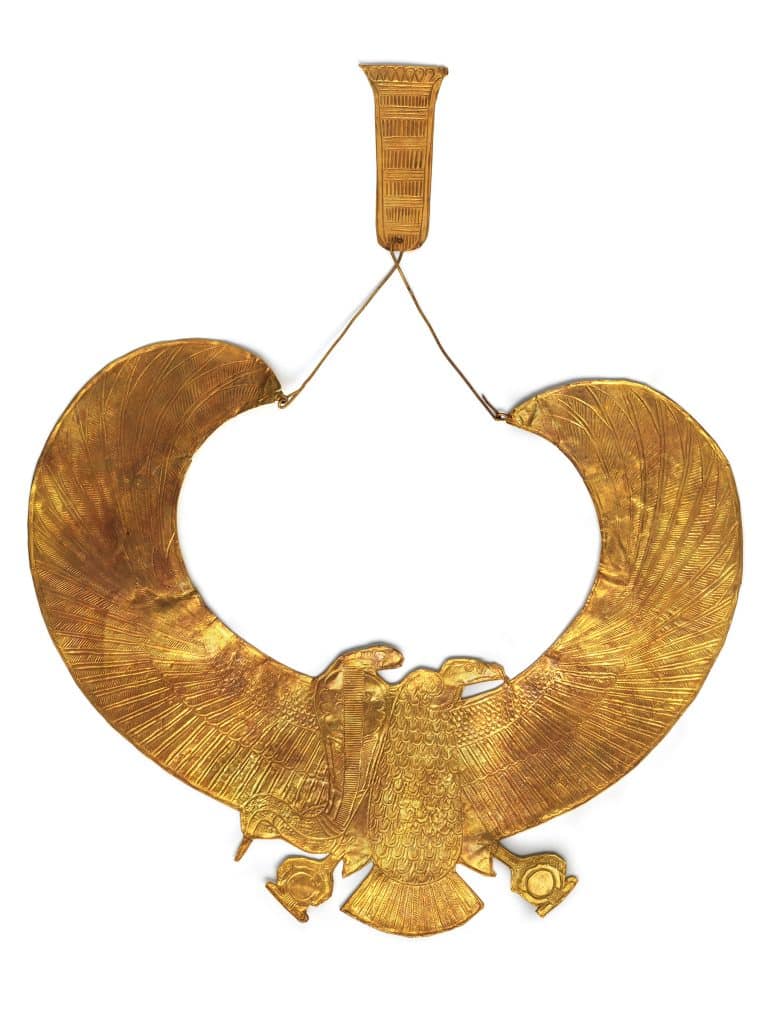 A gold Wesekh collar and counterpoise vulture with spread wings and an Uraeus, or serpent. Photo by ©Laboratoriorosso, Viterbo/Italy 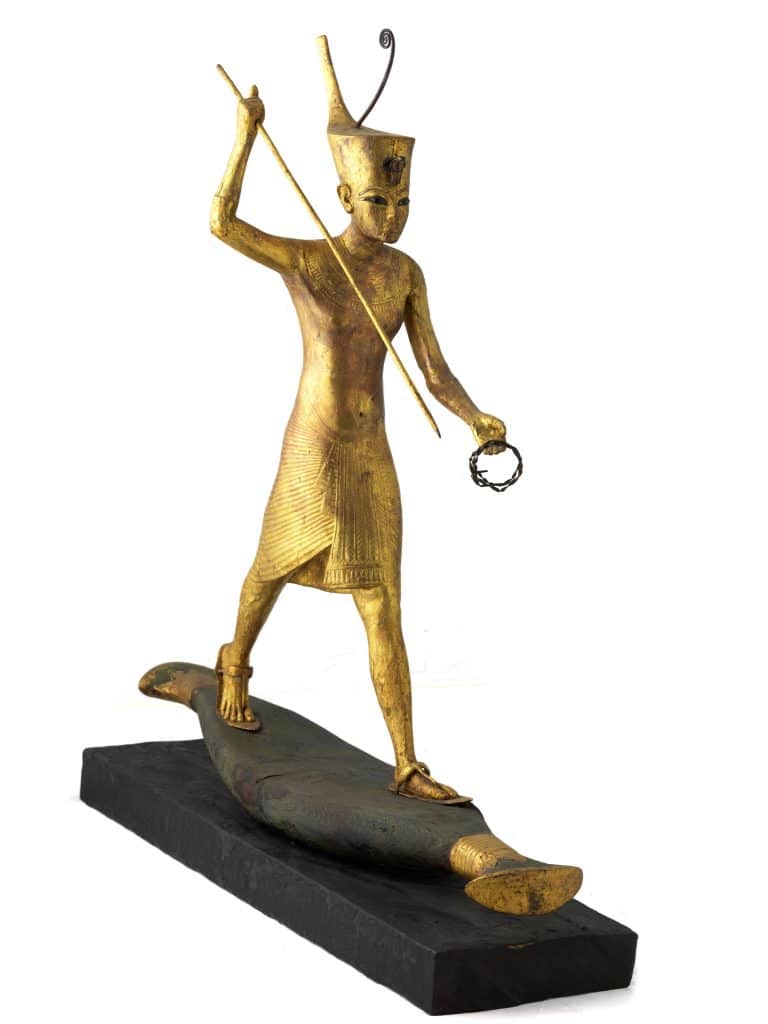 A close-up of one of the four gilded wooden figures of King Tut that were placed in his tomb to guard it. Photo by ©Laboratoriorosso, Viterbo/Italy 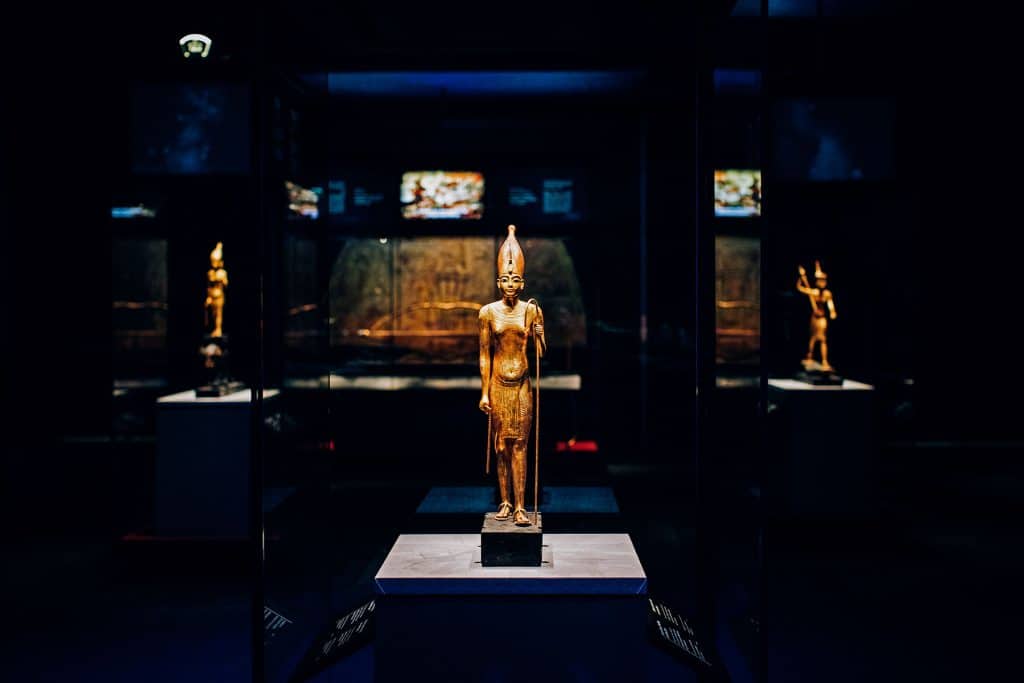 A display of gilded statues of King Tut. Photo by IMG 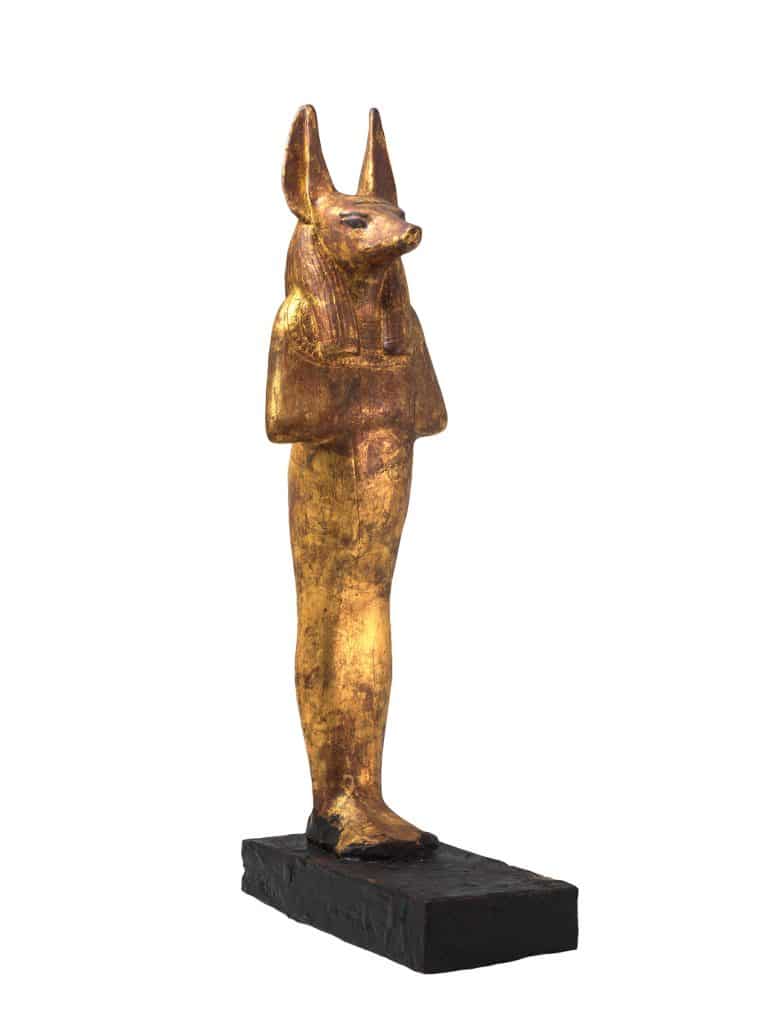 A gilded wooden figure of the jackal-headed Duamutef. Photo by ©Laboratoriorosso, Viterbo/Italy 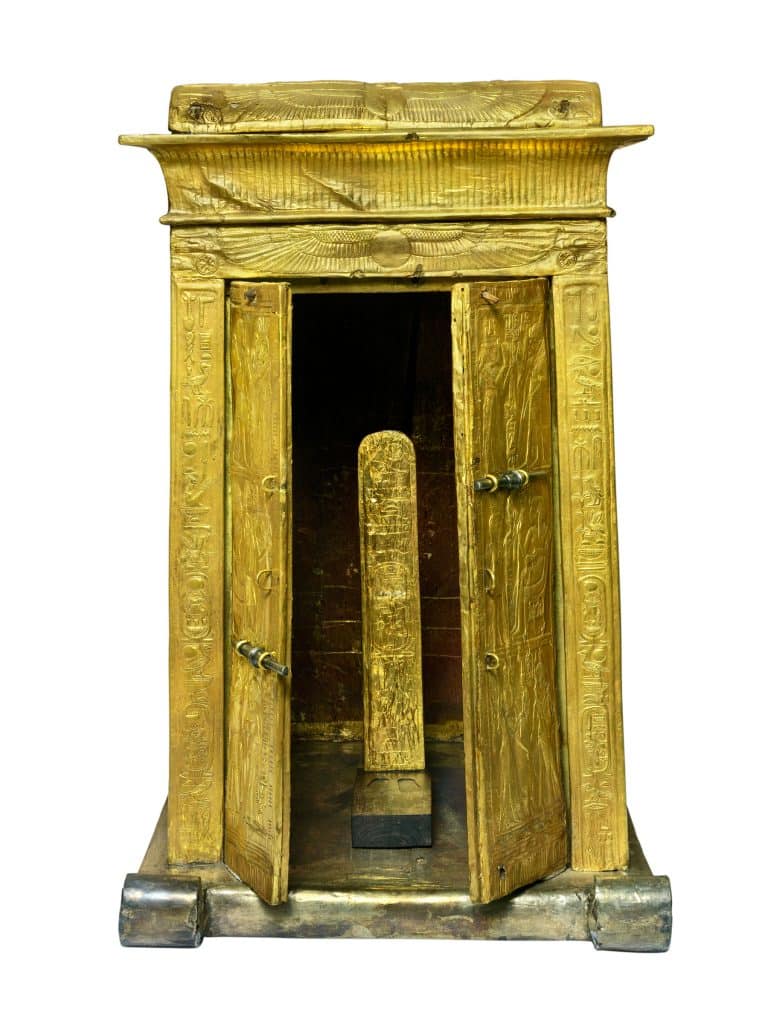 A gilded wooden shrine decorated with scenes from the life of Tutankhamun and Ankhesenamun. Photo by ©Laboratoriorosso, Viterbo/Italy

This is not the usual art history focus.

Everything about Egypt is historical, but, yes, we tried to take a more technological approach. Nine interactive galleries take viewers through the nine steps of the afterlife, a journey for which all these precious objects were intended. Seen this way, and not simply as separate museum collectibles, the objects reveal New Kingdom life and beliefs.

There are ample references to archeological and forensic techniques, which tell us a great deal about the boy king, whose father was the famous monotheist Akhenaton.

We wanted to include dazzling artifacts but also focus on how science and DNA analysis have been able to suggest an actual person who became pharaoh at nine and died around nineteen. For all the splendor, Tut had a clubfoot, likely walked with a cane and suffered a serious bone break that may have killed him. 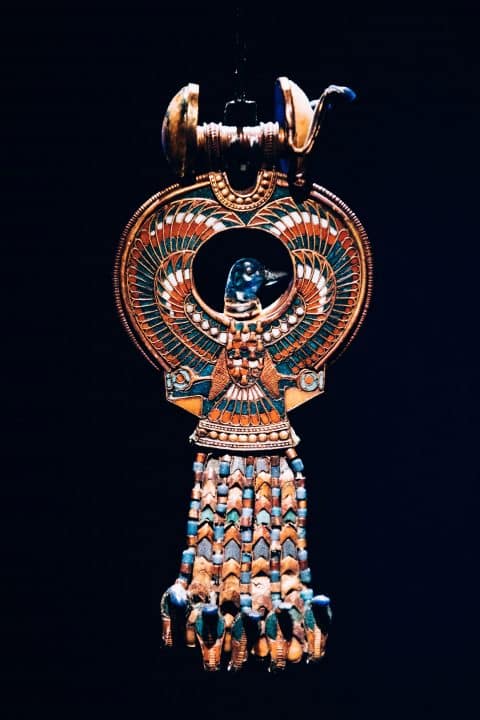 A piece of jewelry with a bird-like design. Photo by IMG

In ancient times, tombs were vandalized as quickly as they were sealed. Why did this one come down to us so untouched?

It is hard to imagine, but Tut was a minor pharaoh — what would have been buried with someone like Ramses staggers conception. Grave robbers and archeologists missed Tut’s tomb, and Carter was about to give up when he stumbled on it. The weather also conspired to preserve everything.

Each day at work, you get to walk through all this. Are there pieces that you find particularly compelling?

Yes. Both dramatic and simple things. There is a wonderful gilded six-foot figure intended to protect Tut. Then, there are the amazing functional craft and technological innovations — screws, bolts, complex latching systems that strike us as fully modern yet are thirty-five hundred years old and all made by hand. There’s also an actual linen glove, probably worn for chariot riding, which makes this remote, astounding history seem very human.