How Lina Bo Bardi Brought a Modernist Touch to Brazil 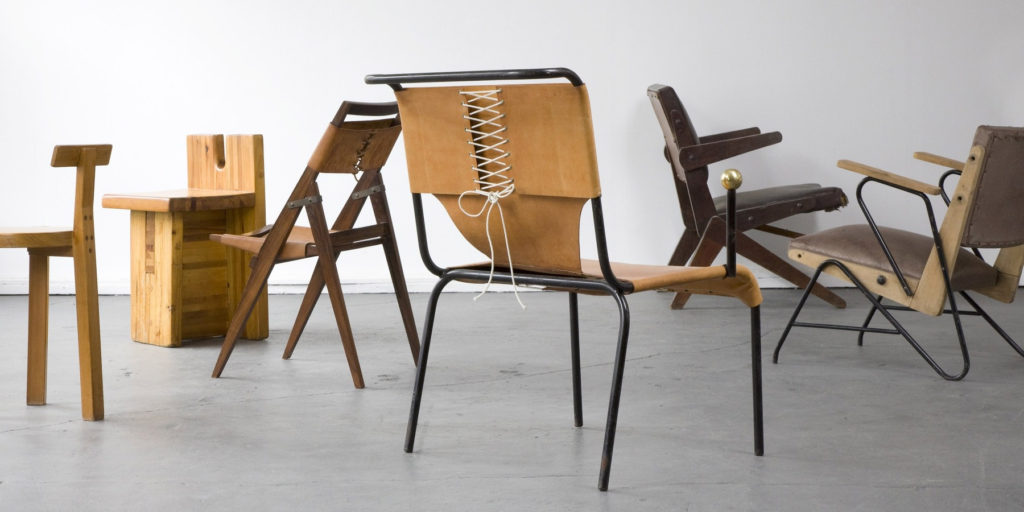 The renowned Italian-Brazilian architect built futuristic landmarks in the heart of São Paulo — and reshaped the way we sit. 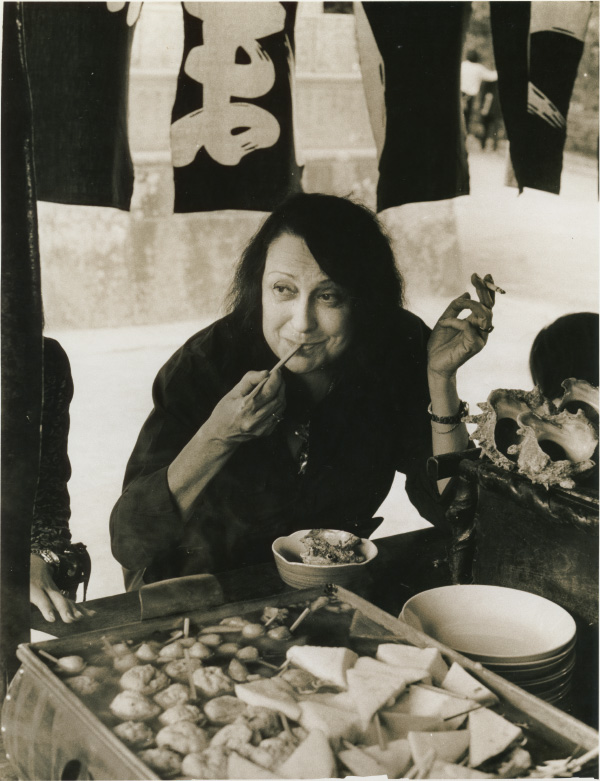 July 18, 2016The vivid architecture, furniture and life of Lina Bo Bardi serve as the focal point of “Line Bo Bardi: Together,” a traveling exhibition currently at the Miami Center for Architecture and Design (photo courtesy of Arper). Top: Bardi’s remarkable designs include the Girafa chair, 1980s; a pinewood seat for the SESC Pompéia in São Paulo, 1987; a folding chair with a jacaranda frame, ca. 1950; the Bola armchair, 1951; a lounge chair in Brazilian hardwood and leather, 1960s; and another lounge chair framed in bent iron with wooden armrests, ca. 1960. Photo by Joe Kramm, courtesy of R & Company

The São Paulo Museum of Art, known as the MASP, is one of that Brazilian city’s most extraordinary buildings. When the museum’s plans began taking shape, in the 1940s, municipal authorities made a seemingly impossible stipulation: Any new structure could not disrupt civic life on the Terraço do Trianon, a large and popular plaza in the middle of town where the MASP was to be sited. The Italian-born Brazilian architect Lina Bo Bardi (1914–92) came up with a brilliant solution. The building would be split in half. Two of its levels sit below ground, while two others — housing the main exhibition area and administrative office — are held aloft 26 feet above the plaza by four enormous red-painted concrete piers. Today, the urban carnival continues apace on the Terraço, and the building’s underside offers shady relief from the equatorial sun.

That elegant plan was only one of the triumphs achieved by Bardi, whose reputation is in the midst of a revival. In our present era, when the focus of the architectural profession seems to be celebrity status and commissions for ever-more-extravagant properties, attention paid to Bardi makes a refreshing change. She was an architect and furniture designer with talent, imagination and a social conscience, who developed a singular style — a blend of rationalist modernism and spirited populism. “Lina Bo Bardi’s most important legacy is her humanist approach,” says Noemi Blager, curator of “Lina Bo Bardi: Together,” a traveling exhibition on view now through July 29 at the Miami Center for Architecture and Design. “Bardi put people at the center of her projects.”

The show uses oddball art installations, films and wall-sized photography to create an immersive experience. It also has examples of Bardi’s most expressive furniture designs, like the Bowl chair — an upholstered hemispherical dish mounted on a four-legged circular metal base — newly released in a licensed edition by the Italian furniture maker Arper. The goal of the exhibition, Blager says, “is to communicate Bardi’s attitude, rather than make another exhibition of drawings and models. It is not about what her buildings look like, but what they feel like.” 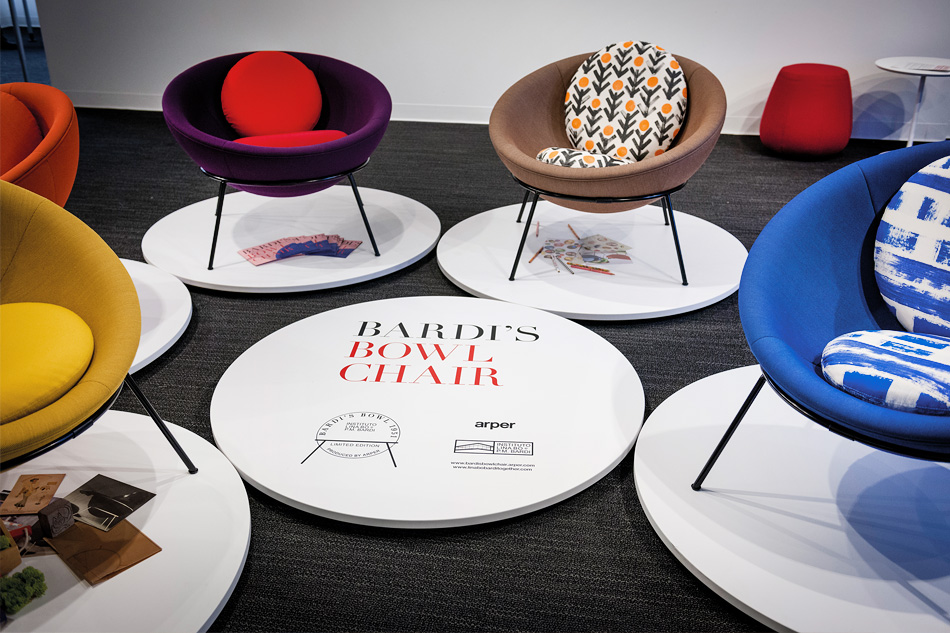 The star of the “Together” exhibition is the Bowl chair, which Bardi designed in 1951 but never mass-produced in her lifetime. Italian company Arper recently released the chair in a riot of colors and patterns. Photo by Sandy DeWitt Photography 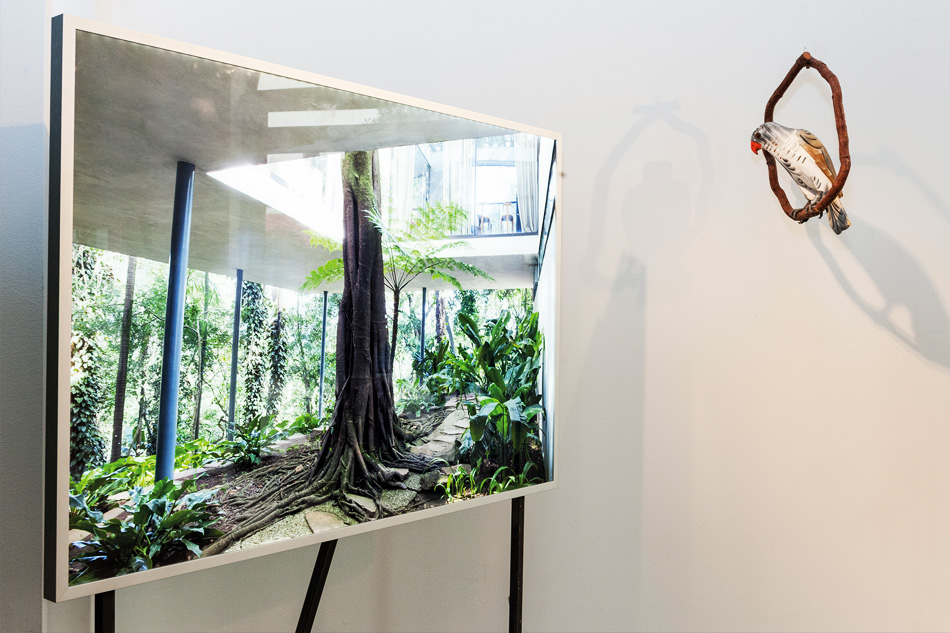 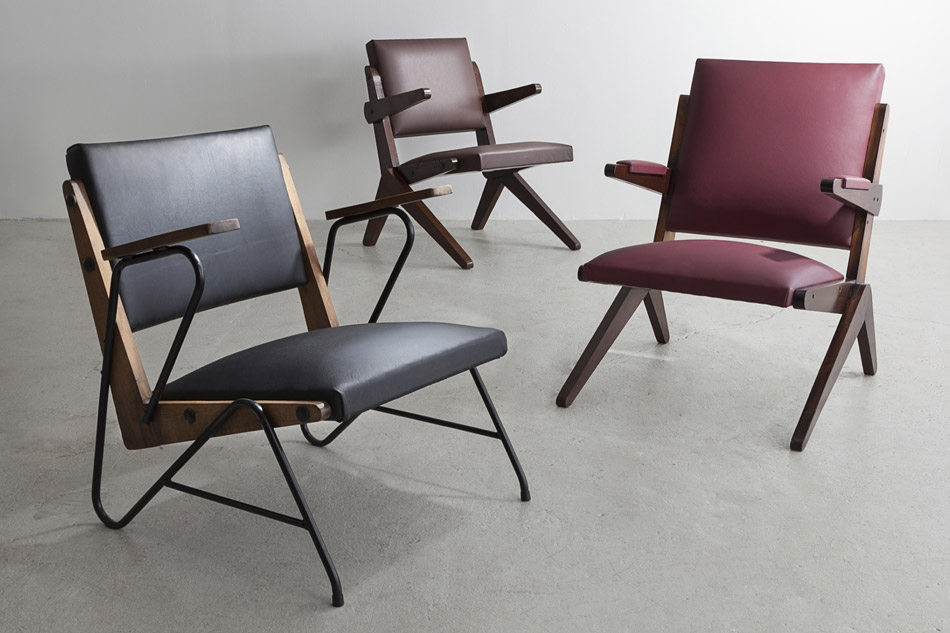 Three armchairs from the 1960s embody Bardi’s sleek yet comfortable brand of modernism. These seats are among the designer’s work highlighted in the recent book Brazil Modern: The Rediscovery of Twentieth-Century Brazilian Furniture (Monacelli Press), by Aric Chen, with an introduction by Zesty Meyers, co-owner of the New York gallery R & Company. Photo by Joe Kramm, courtesy of R & Company 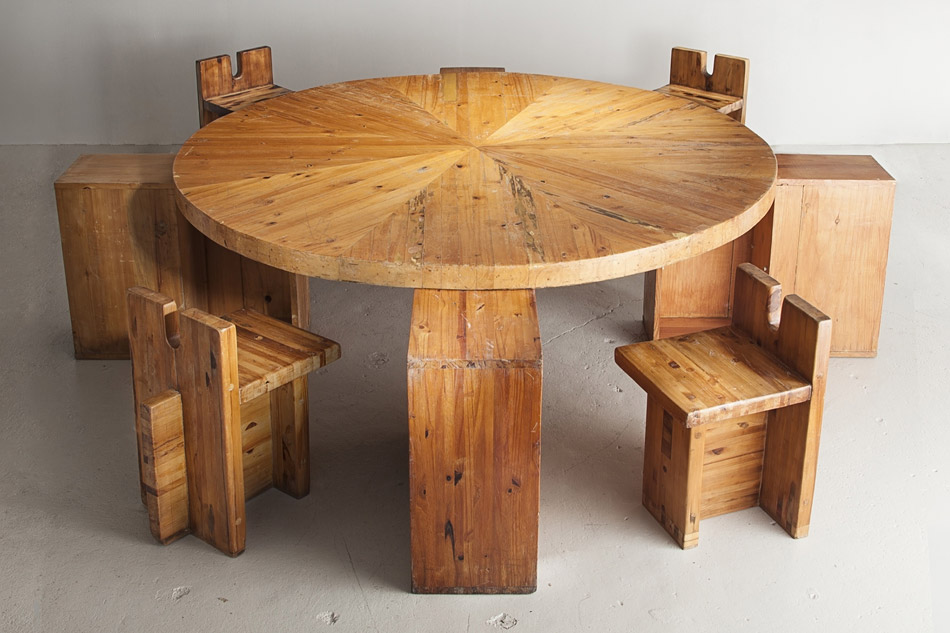 Bardi designed this pinewood table and chairs for the library and public spaces of the SESC Pompéia, in São Paulo, which is where “Together” is scheduled to travel in October. Photo by Joe Kramm, courtesy of R & Company 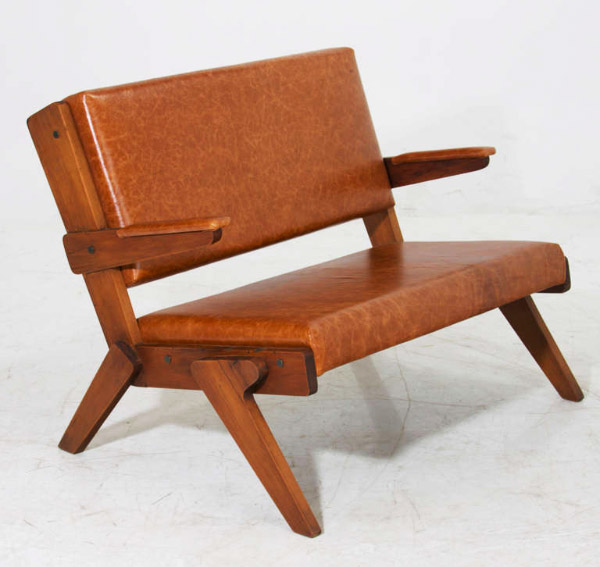 If it is an idiosyncratic show, it tells an idiosyncratic story: that of an architect who came to imbue the pure and lofty if somewhat bloodless tenets of modern design with the warm and earthy character of her adopted homeland. Achillina Bo was born in Rome and graduated in 1939 from the Università degli studi di Roma “La Sapienza” with a degree in architecture. She moved to Milan, worked with Giò Ponti, among other modernist luminaries, and began a career in design journalism. She served as an editor for Ponti’s groundbreaking magazine, Domus, and in 1945 traveled for the publication throughout Italy with a photographer, documenting the physical destruction wrought by World War II.

The following year, she married the art dealer and critic Pietro Maria Bardi. In 1947, the two sailed for Brazil, where Pietro had been invited to help establish the São Paulo Museum of Art, the first in the nation to exhibit modern art. Pietro intended to stay only a year in Brazil, but instead he became director of the museum and spent the rest of his career there. His wife resumed her work in journalism and soon launched her architectural practice. Her first building project was designing a house for herself and her husband on a hillside in what were then the outskirts of São Paulo. Built in 1951 and known as Casa de Vidro (or Glass House), it is a glass-walled box set on slim steel columns, inspired equally by the Bauhaus and Le Corbusier. Its interiors, with their mid-century furnishings, folk-art pieces and ethnographic curios, are reminiscent of those of Charles and Ray Eames’ house in California.

Because of Pietro’s ambitious schemes for making art and art education accessible to all, the MASP soon outgrew its first home. Bardi, who had created the interiors of the original museum, was a natural choice to design the second MASP, which was completed in 1968. It was one in a series of what the critic Martin Filler called “structurally audacious yet uncommonly comfortable, unapologetically untidy yet conceptually rigorous” buildings. 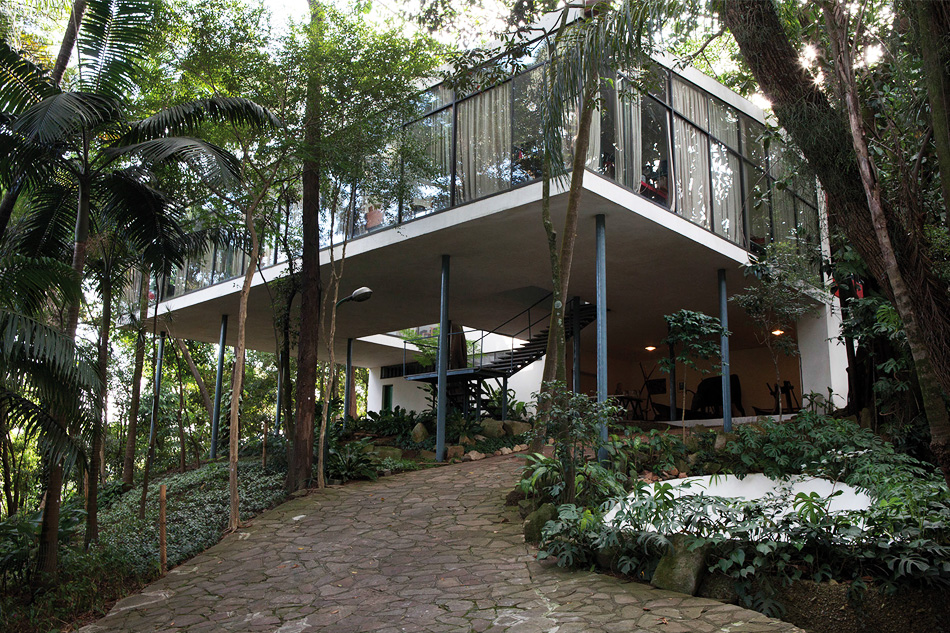 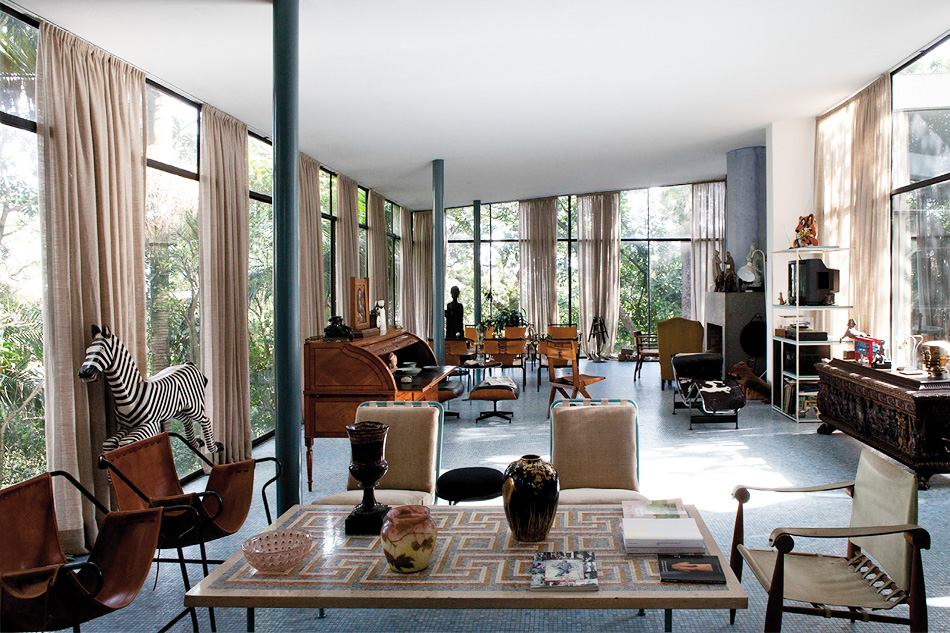 Inside Casa de Vidro are furniture pieces designed by Bardi, such as the tripod chairs, 1948/85; coffee table, 1950; and accent chairs, 1951, in the foreground. Photo by Ioana Marinescu, courtesy of Instituto Lina Bo e P.M. Bardi archive 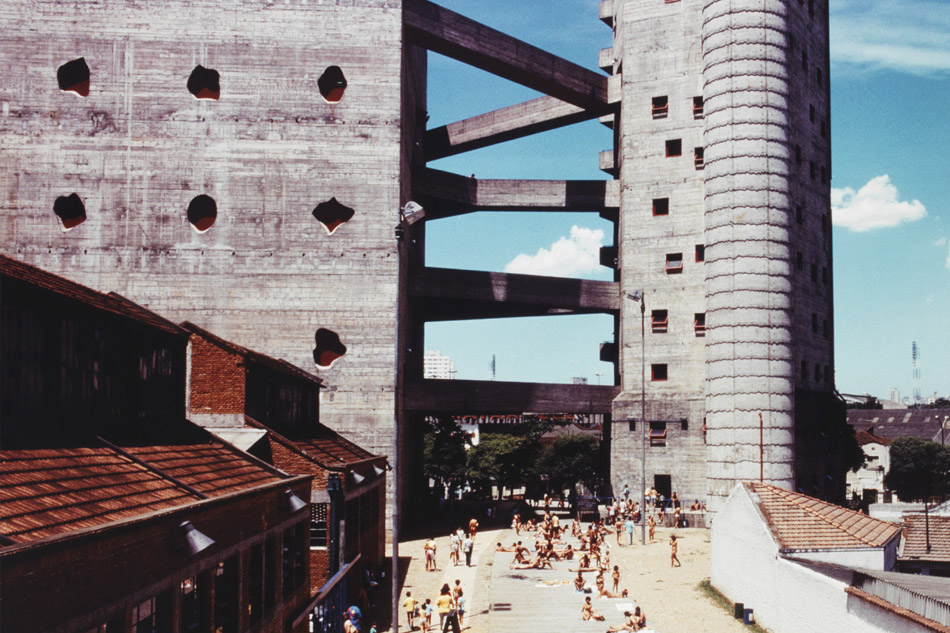 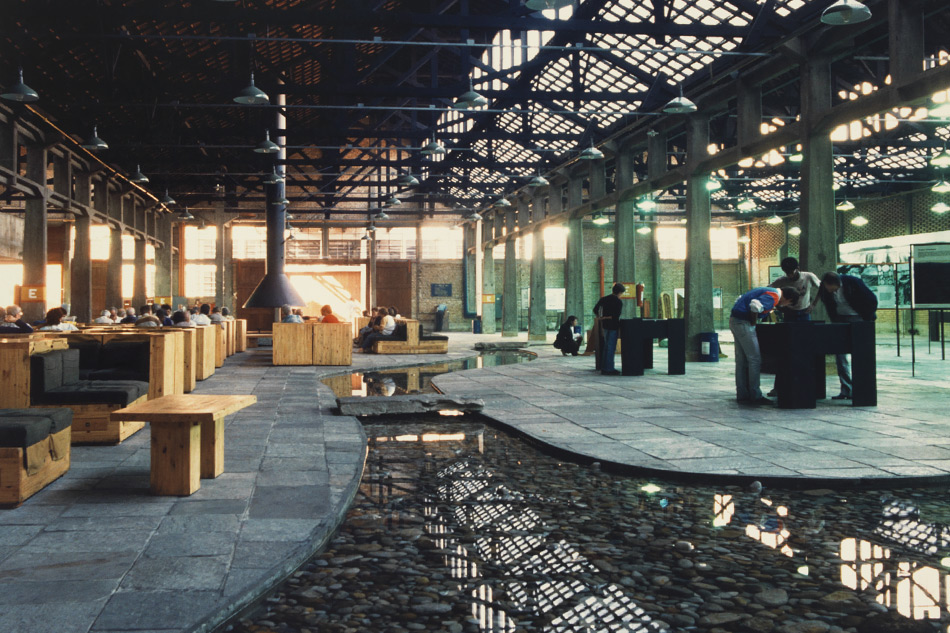 Completed in 1982, the SESC Pompéia is a place where the public can relax, socialize, take in culture and play games. Bardi also created the simple yet poetic furniture inside. Photo by Sérgio Gicovate, courtesy of Instituto Lina Bo e P.M. Bardi archive 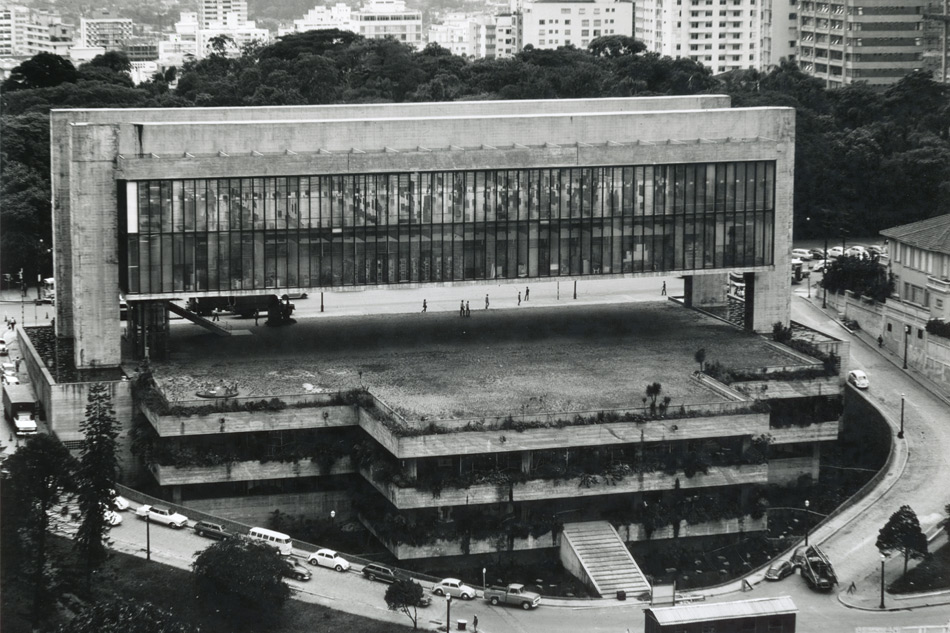 For the São Paulo Museum of Art, Bardi placed the exhibition spaces and administrative offices above and below a popular public plaza, which the city stipulated had to remain accessible when the museum was being planned in the 1940s. Photo by Luiz Hossaka, courtesy of Instituto Lina Bo e P.M. Bardi archive

In the late 1950s and early ’60s, Bardi spent much of her time in Bahia, one of the poorest, as well as most demographically and culturally diverse, states in the nation, working on designs such as the restoration of the Solar de Unhão. (A Salvador landmark from the 18th century, the building served as a transfer point for sugar shipments and was transformed by Bardi into a museum for modern art.) It was in these years that she became fully Brazilian. Her embrace of the country’s social mosaic was most fully expressed in her last major project, and her masterpiece: a combined cultural and recreational center in São Paulo known as the SESC Pompéia, which is the final stop on the “Together” tour in October. Built in stages between 1977 and ’82, the complex has as its core a renovated drum factory. In it, Bardi — to use architectural parlance — created a nonhierarchical environment, with equal prominence and care given to areas as disparate as theaters, sports facilities and places for old folks to sit and gossip or play chess. “Lina Bo Bardi could see people’s potential and helped them achieve it to the full,” says Blager. “A building like the SESC Pompéia empowers them and makes them feel good about themselves.” 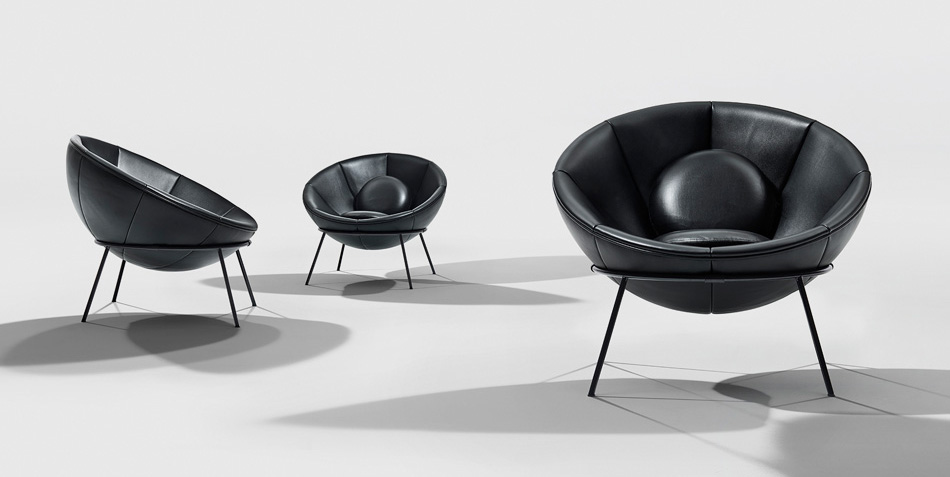 Arper also released a black leather Bowl chair as an alternative to the more colorful versions. Photo courtesy of Arper

As a furniture designer, Bardi demonstrated flair from the start. The Bowl chair, designed in 1951 but not manufactured until Arper recently issued it, is a marvel of versatility. The seat can be swiveled to satisfy any attitude of repose or dismounted to serve as a rocking baby crib. That same year, she made the throne-like Bola de Latão chair, which in place of arms has stanchions topped by brass balls. Its slung leather seat and backrest have unfinished edges secured with lacing,  giving the piece an artisanal, perhaps even sexual, air.

“It’s relaxed, but not completely relaxed,” says Carlos Junqueira, owner of the Brazilian design gallery Espasso. “It’s something like a sculpture you can sit in.” In the late 1950s and early ’60s, she designed cushioned chairs with wooden frames whose softened angularity recalls the work of Pierre Jeanneret and Marcel Breuer’s 1938 furniture designs for Bryn Mawr College. But Bardi’s furniture construction and aesthetic sensibilities evolved in tandem with her populist principles.

Her last chairs, designed for the SESC Pompéia, are built of solid wood, sturdy and durable with simple and graceful forms. They seem to suggest that the most interesting thing about a piece of furniture should be the person using it. In a way, they epitomize the design philosophy of Bardi, who once said: “Until a person enters a building, climbs steps and takes possession of the space in a ‘human adventure,’ architecture does not exist.”