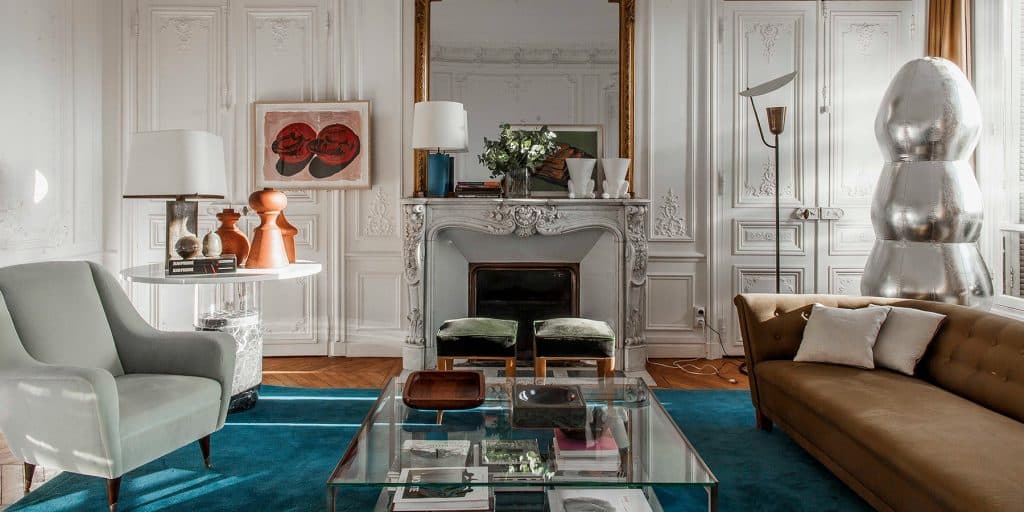 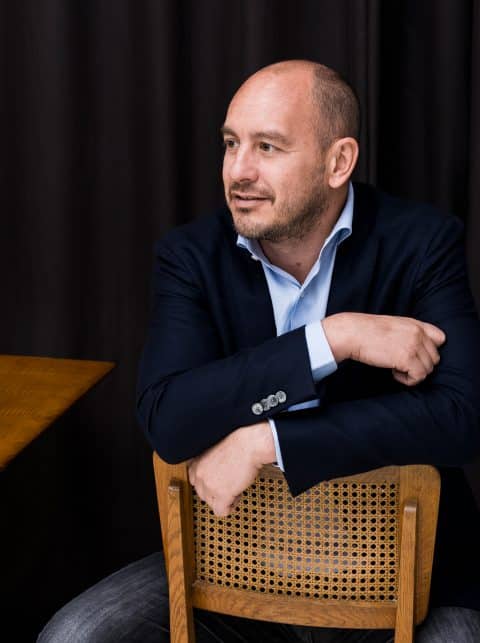 May 26, 2019Luis Laplace worked for architect Annabelle Selldorf in his native Argentina, as well as in Spain and the U.S., before starting his own studio in Paris. Top: The living room of Laplace’s Paris apartment features an Elsa Gullberg sofa, Mathieu Matégot floor lamp, Italian armchair, Maison Jansen stools and, at far right, Paul McCarthy’s Brancusi Tree, 2007. All photos by Babi Carvalho unless otherwise noted

When interior designer Luis Laplace was growing up in Buenos Aires, in the 1970s and ’80s, he spent a lot of time at the private airport that his grandfather, a pilot, had founded after the second World War. “My grandfather would take me with him on flights to see friends on the weekends and for holidays,” he recalls. “He was a very interesting man to travel with, and he understood my longing to see beyond the limits of my immediate neighborhood.”

Laplace’s mother, who ran the airport, was also a significant influence, as was his father, a lawyer, although the two divorced when Laplace was young. “My father had a far more traditional and structured outlook on life, compared with my mother,” he says. “But he also loved the freedom of dance. We would spend weekends with him watching Fred Astaire and Ginger Rogers films.” While neither parent was an artist, Laplace grew up with a great appreciation for the importance of art, and both his mother and father encouraged him to explore books, museums and galleries.

In design, Laplace established a career that was both artistic and structured. After graduating from the Universidad de Belgrano in 1995 with a degree in architecture and urbanism, he was hired almost immediately by Annabelle Selldorf, founder of Selldorf Architects, in 1996. A few years later, he moved to Mallorca, Spain, where he assisted on a project for two years before joining Selldorf’s practice in New York. “It was from Annabelle that I really learned the skill of interior architecture,” he says. “The older I get, the more I see that there is a big benefit to having one mind guiding everything from beginning to end.” He loved the excitement and energy of New York but moved to Europe after 9/11. “It upset me so much at a very deep level that I knew I had to leave.” In 2004, he set up his eponymous practice in Paris with his partner, Christopher Comoy, who has a legal and financial background. 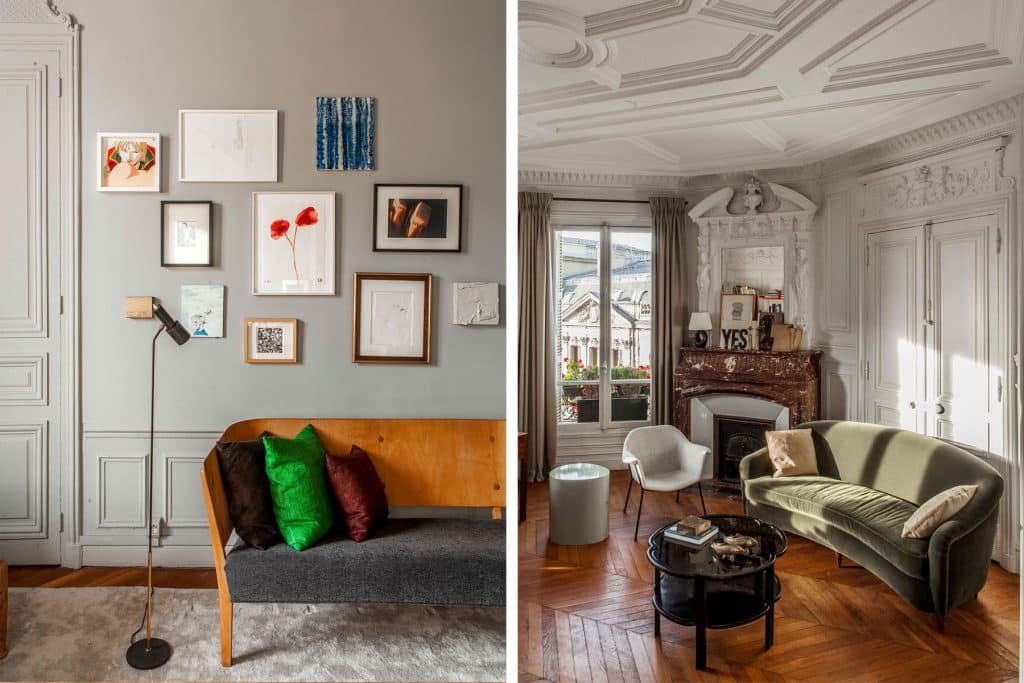 Left: In the study of his Paris home, the designer placed a Hans Agne Jakobsson floor lamp besides a Fritz Hansen sofa. Hanging above are works by Louise Bourgeois (I Do, 2010) and  Jean Cocteau (La mort du Toréador, 1955). Right: An Italian sofa and lacquered Maison Jansen coffee table elsewhere in the apartment both came from 1stdibs.

Today, the studio has a staff of more than 15 architects, designers and decorative arts experts who work from a handsome 19th-century structure facing Place Saint-Georges, in a neighborhood known as la Nouvelle Athènes. It also contains one exhibition space displaying the Laplace Bespoke collection — furniture, lighting and accessories of his own design — alongside antique, vintage and unique pieces that he has personally selected. This year, he opened l’Atelier Laplace, an additional space to welcome clients on the ground floor of the building, which has access to the garden terrace. “We like to welcome people here as if to our home,” he says of the studio. “It is a very convivial space, with a bar, lounges and a little garden. The idea is to show how we work in a very natural way.”

Within the same building is the couple’s own apartment, which Laplace has done up in a typically eclectic manner, mixing mid-20th-century pieces — such as Ignazio Gardella’s Digamma armchairs, a Mathieu Matégot floor lamp and a red Jacques and Dani Ruelland table lamp — with key pieces from his Bespoke line.

Laplace is a ferocious buyer of antique, vintage and modern collectibles for his clients. He admits to an addiction to such pieces. His own apartment, for example, contains a Murano glass Venini lamp and an Edward Wormley sofa, the latter bought from 1stdibs dealer MORENTZ, while the showroom often features items like Danish ceramics and Carlo Scarpa sofas sourced from the platform. “If there is one good thing about globalization,” Laplace notes, “it is that we can create spaces with pieces from all over the world — a seventies French table next to an Art Deco side table from Austria, or a Brazilian lamp next to an Italian sofa. What matters is that each object speaks to the next.” 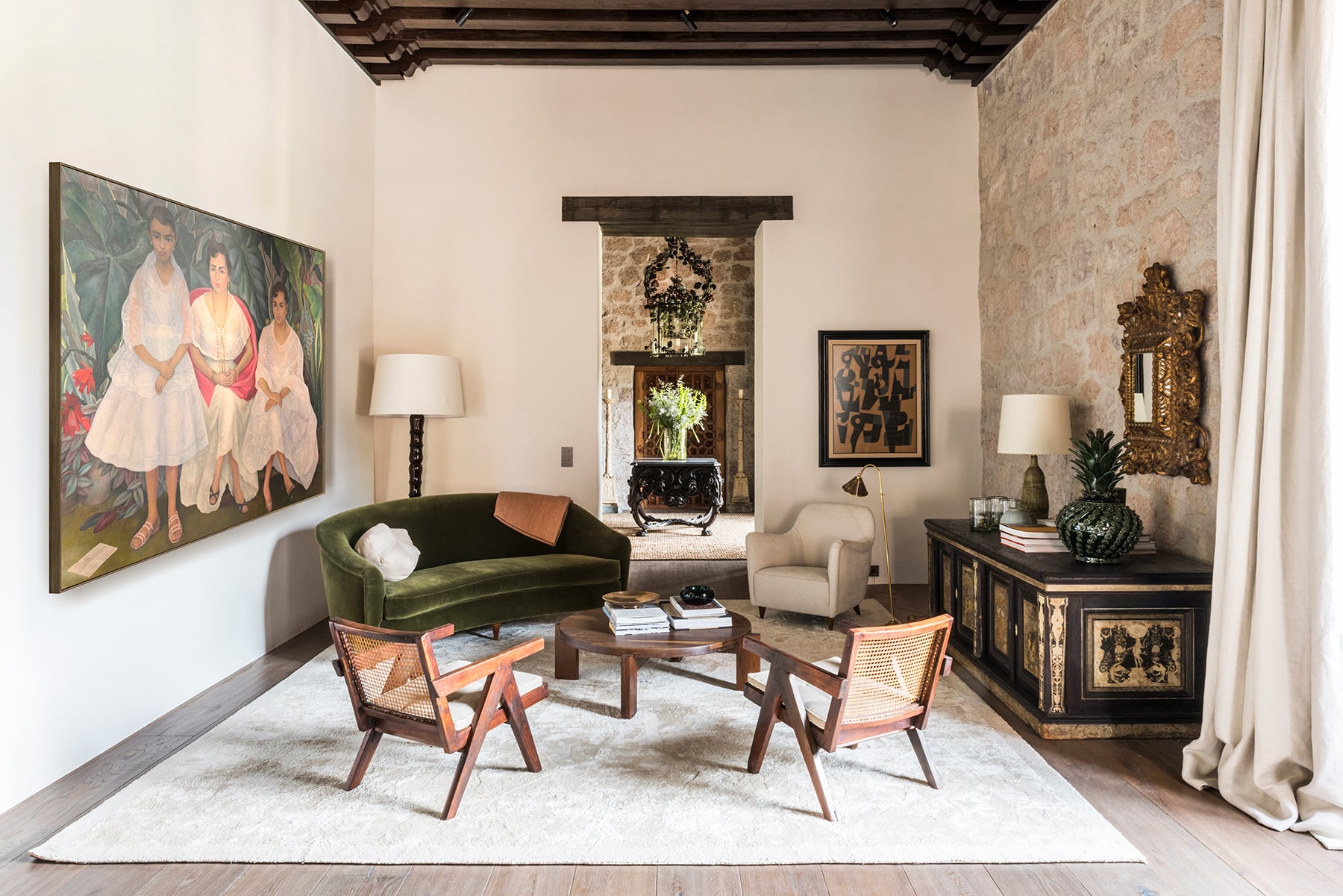 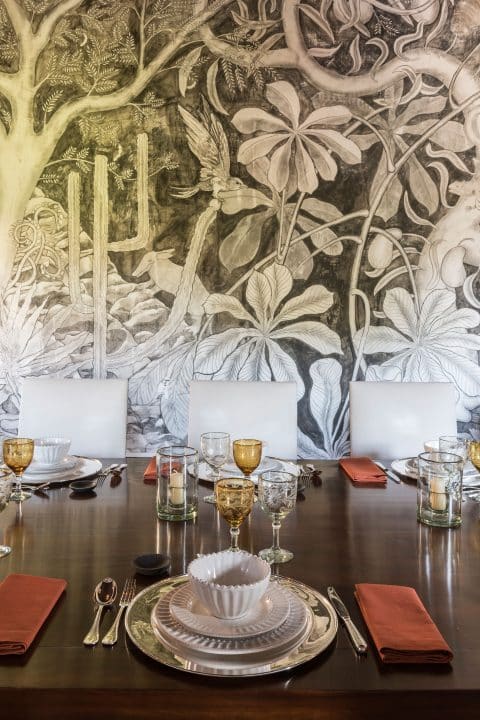 For the walls of the dining room in Casa Michelena, Laplace took inspiration from a Philip Guston mural in a nearby university library and commissioned local artist Jose Roberto Soto to create a fresco depicting flora and fauna found in the area around Morelia. The table and chairs are by Alfonso Marina and the silver by Christofle.

The thing that most sets Laplace’s firm apart from other design studios is its focus on art, as evidenced both by its projects for galleries and museums, like the one in San Sebastián, Spain, dedicated to the oeuvre of Eduardo Chillida, and by the private residences it creates for art collectors and artists, including a Parisian apartment for Cindy Sherman. “Art is always very present in our work,” he says. “We put ourselves into its service. We know art, we understand art, and we empathize with how collectors feel about art.” That has made him the designer of choice for such prominent collectors as Mick Flick, Nicolas Cattelain, Adriana Abascal, and Iwan and Manuela Wirth.

Laplace would never, however, design a decor specifically to “go” with the art it displays. He is keenly aware that doing so can hinder the homeowner’s creative flexibility. “The very last thing we would do is upholster a sofa to match a painting,” he explains. “We understand how important it is that people can switch their art around without the need to constantly redecorate.”

While many people come to Laplace with very specific briefs about how their art should be displayed, others look to him for guidance. “We help them enhance their collections and install them in the best way possible,” he says. Not surprisingly, he often visits leading art fairs with clients. 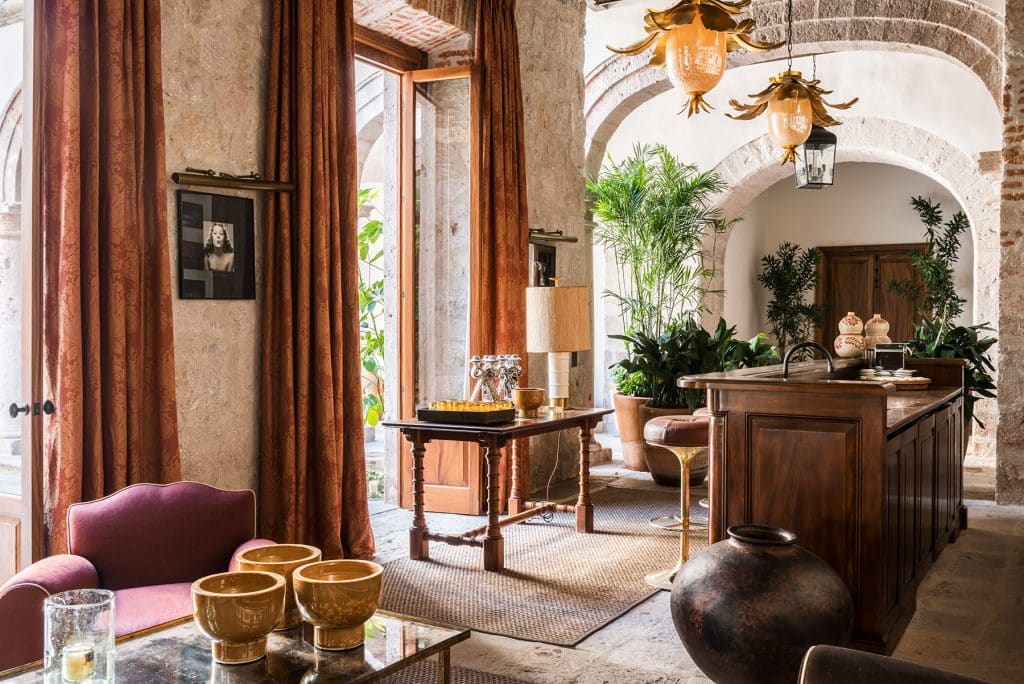 Argentine-born, Paris-based designer Luis Laplace reimagined Casa Michelena — an 18th-century mansion in Morelia, Mexico — to serve on its upper floors as his client’s private home (whose bar is seen here), with public spaces at street level. 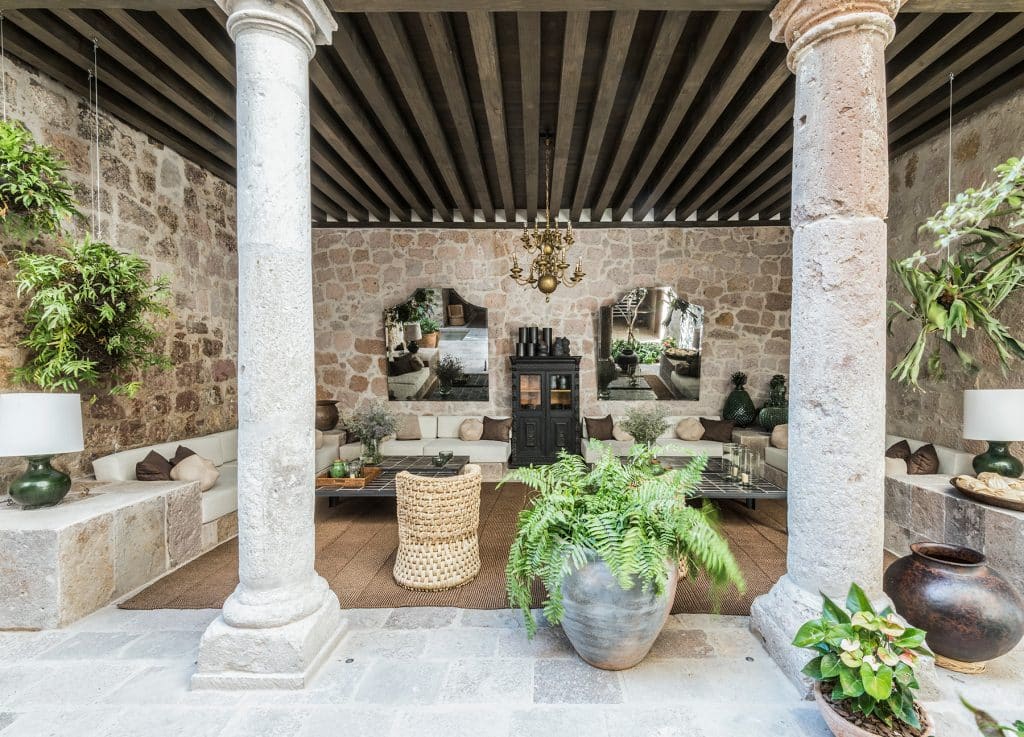 Casa Michelena is built around a series of colonnaded courtyards. Laplace turned this covered patio into an alfresco living room. 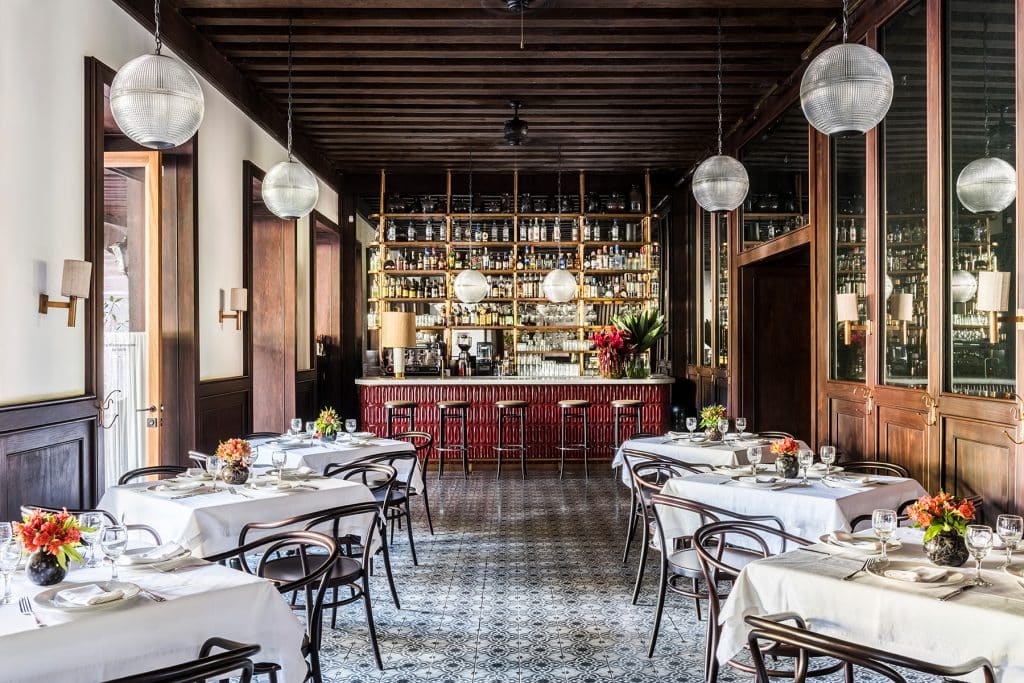 La Conspiración, the restaurant on the ground floor of Case Michelena, has Thonet chairs at every table. 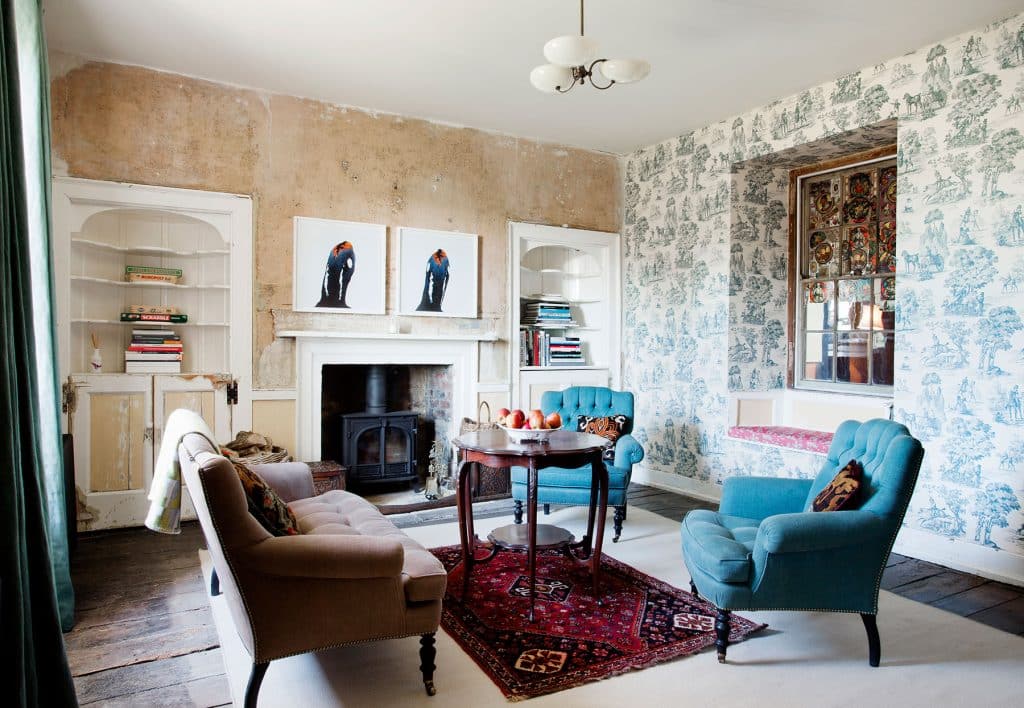 Roni Horn’s Untitled, No. 2, 1999, hangs over the fireplace in the living room of Durslade Farmhouse, an inn Laplace designed in England’s Somerset County. Photo by Aaron Schuman 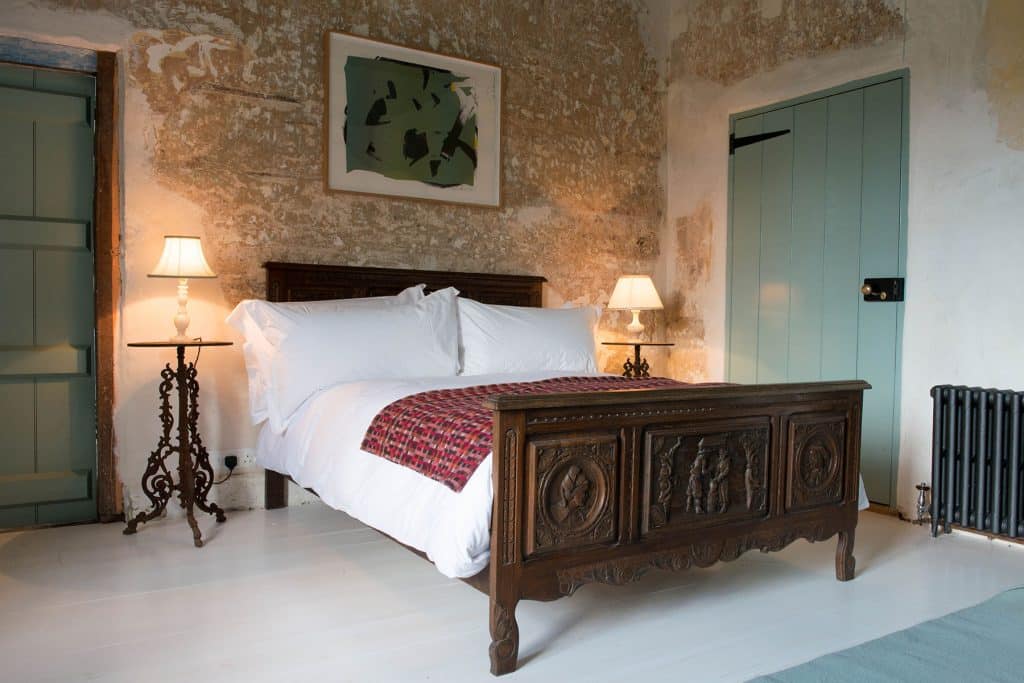 Laplace filled the inn with antiques and vintage items from various sources, many of them local, as well as contemporary art. Photo by Kevin Mitchell 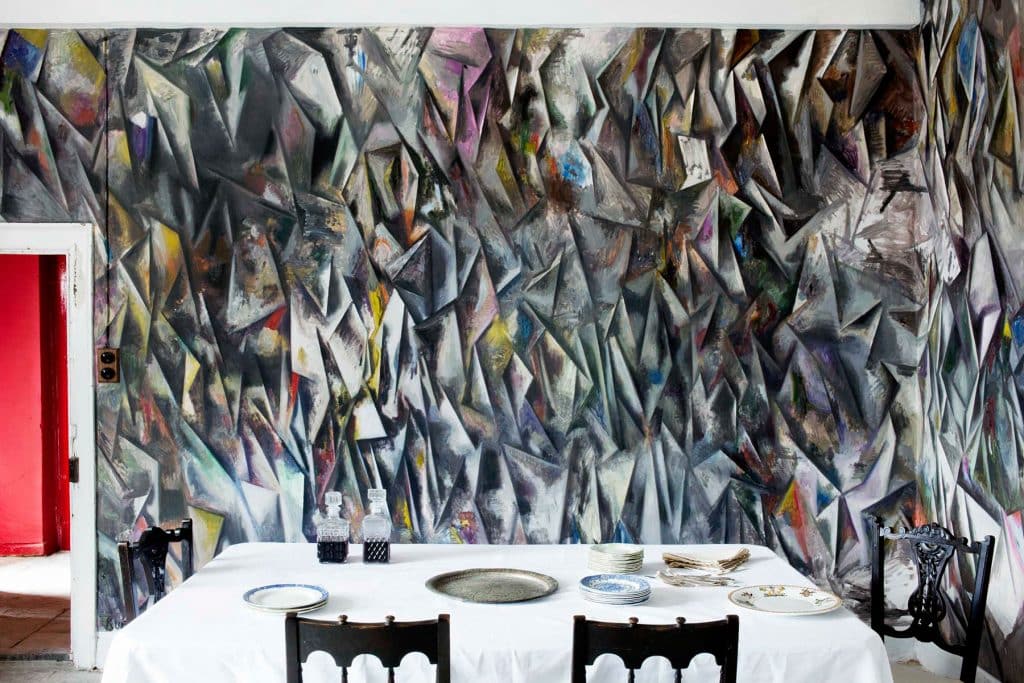 A fresco by Guillermo Kuitca steals the show in the dining room of Durslade Farmhouse. Photo by Aaron Schuman 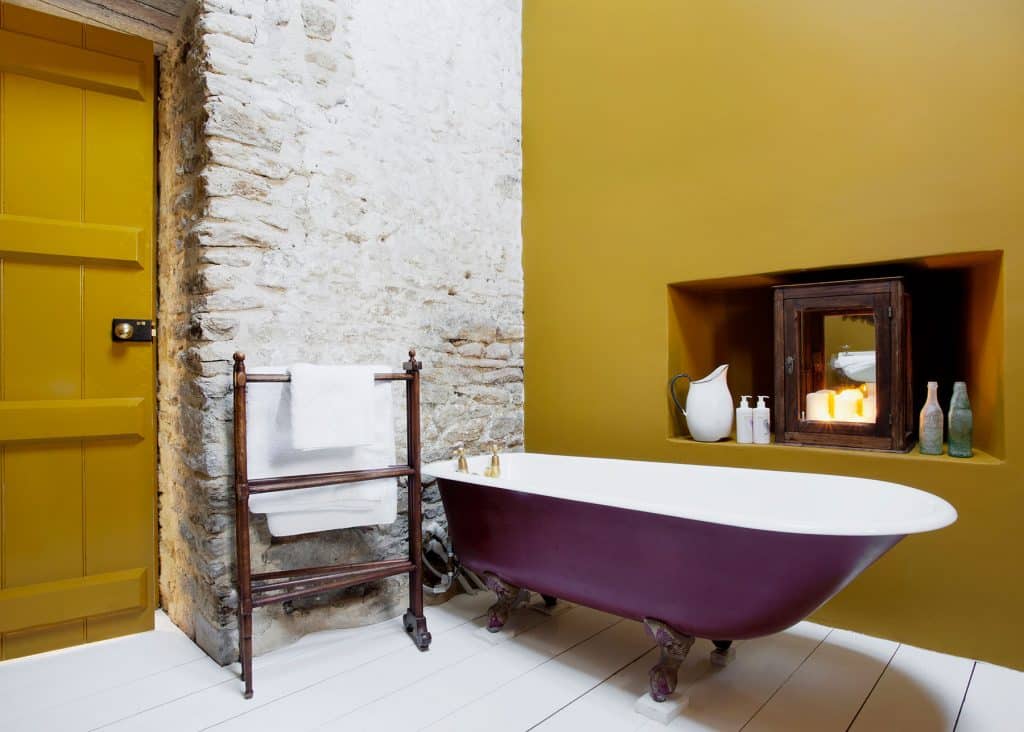 One of the inn’s bathrooms plays with complementary colors, contrasting the tub’s rich purple with the wall’s deep golden hue. Photo by Aaron Schuman

Currently, Laplace is working mainly on residential projects, in England, Spain, Germany, France, the U.S., Canada, the Balearic Islands and Mexico, among other places all around the globe. He is particularly excited about the large home he is designing in Careyes, in western Mexico, a 30,000-square-foot new build whose architecture and interiors he has fashioned as a seamless whole. “The advantage of working beyond Europe in this sort of location is that you are allowed to do something on such a scale,” he says of the 10-bedroom house. “It is carved into the rock overlooking the Pacific Ocean, and the combination of nature, coast and water is superb. We are playing with the effect of light at different times of the day, striving for the perfect balance between pure architecture and interiors.” To that end, he has created hidden, but strategically positioned, skylights to pull indirect sunlight into the house. 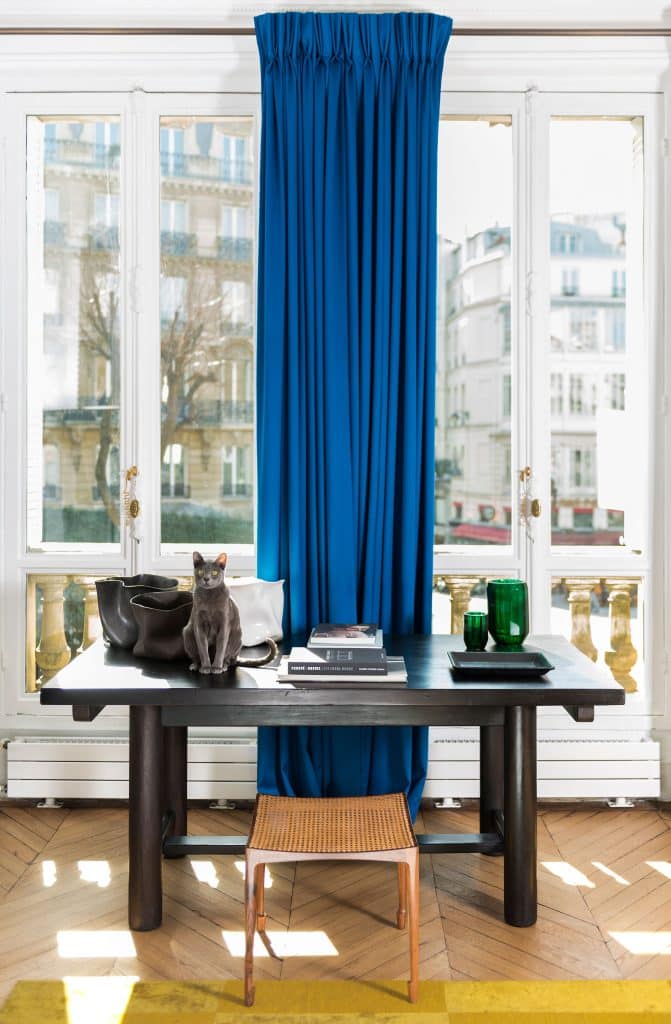 A Bernt Peterson stool sits at a desk topped by Daum vases in the offices of Laplace’s studio, which occupies the same 19th-century building overlooking Place Saint-Georges as his Paris home.

A star of the Laplace portfolio is Casa Michelena, in the Mexican town of Morelia, an 18th-century Hispanic Mexican stone mansion built around a series of courtyards. Owner Alejandro Ramírez Magaña, CEO of movie theater chain Cinépolis, commissioned him to both refurbish it as a secondary private residence and to include public spaces like a restaurant, café/bookstore and bakery. Laplace has sought out and commissioned local craftspeople who work in wood, stone, ceramics, textiles and copper — the last a speciality of the area. He went to local antiques dealers in France and Mexico to source the Spanish-influenced furniture so typical of the area but also brought in European touches, like the imposing 1950s Italian lanterns in the dining room.

For that room, Laplace drew inspiration from American artist Philip Guston’s impressive mural The Inquisition, which is displayed in the library of the university in Morelia, and commissioned a local muralist, Jose Roberto Soto, to create an epic work depicting flora and fauna of the region. Magaña is a huge collector of art by such luminaries as Diego Rivera as well as by local contemporary talent. Laplace mixed his pieces in provocative juxtapositions, as in the salon, where burnt paintings by Davide Balula face off against an abstraction by Carlos Mérida. “My aim was to allow my client to move the art around when he wishes,” he says, “and to have the versatility within the interior to bring new works in.” The decor also celebrates local Morelian ceramics with pieces like the huge pineapple-shaped ones, traditionally given as a housewarming gift, displayed on the fireplace mantel in the same room. 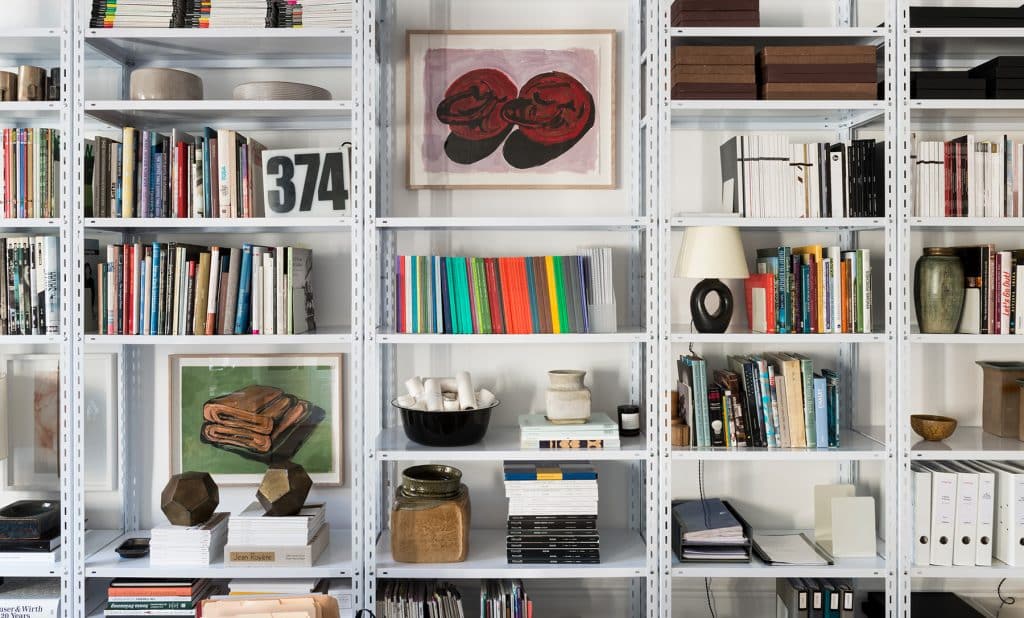 A collection of art and design books and various objets fill simple metal shelving in the Laplace studio.

Laplace prides himself on being pragmatic, believing he would have failed if clients complained they couldn’t sit comfortably or entertain properly. “I am not interested in the superficial or the spectacular,” he says. “My obsession is to fulfill the needs of the client first and make sure that everything works properly. True beauty follows from that.” He also sees it as his job to perform three distinct roles: architect, interior designer and art specialist. “Each of these must fulfill a different function,” he concludes, “yet all must come together harmoniously in the end.” 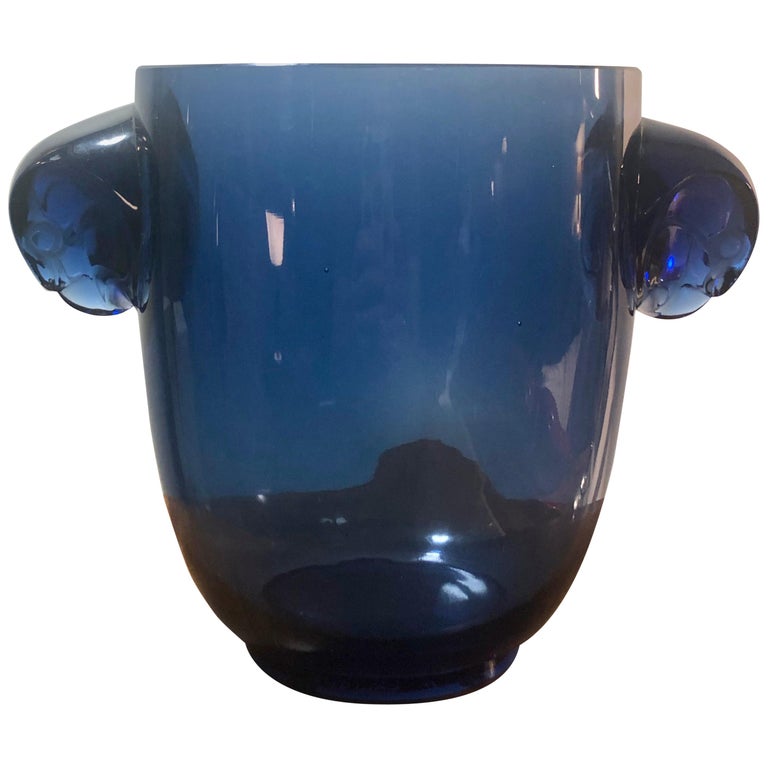 “Lalique glass vases dating back before World War Two always add a touch of color to a space. This one in particular has a beautiful deep blue, probably impossible to achieve today.” 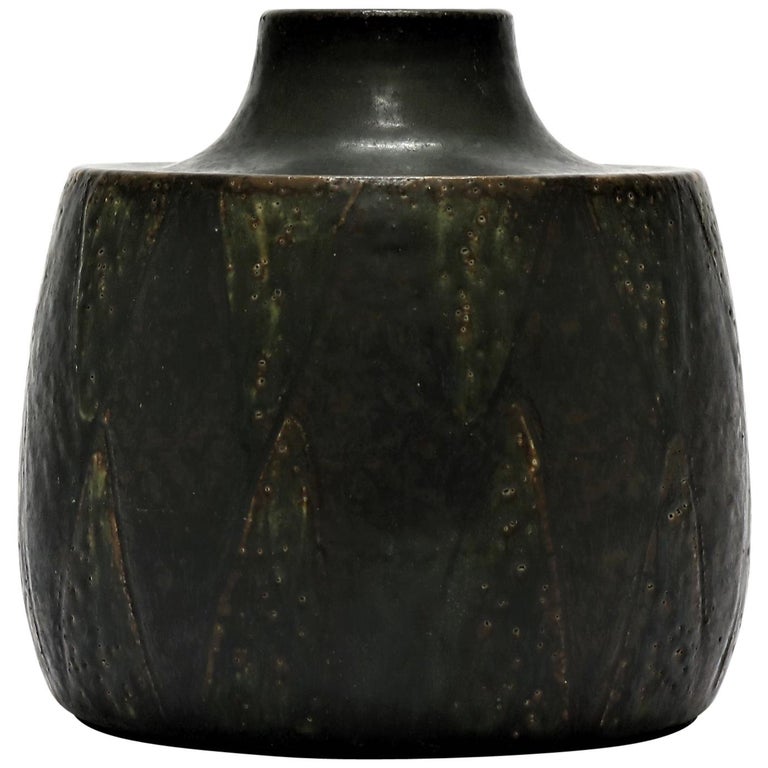 “Danish Saxbo ceramics are great to collect. I like how their roughness and earthy patina combine with their nuanced colors.” 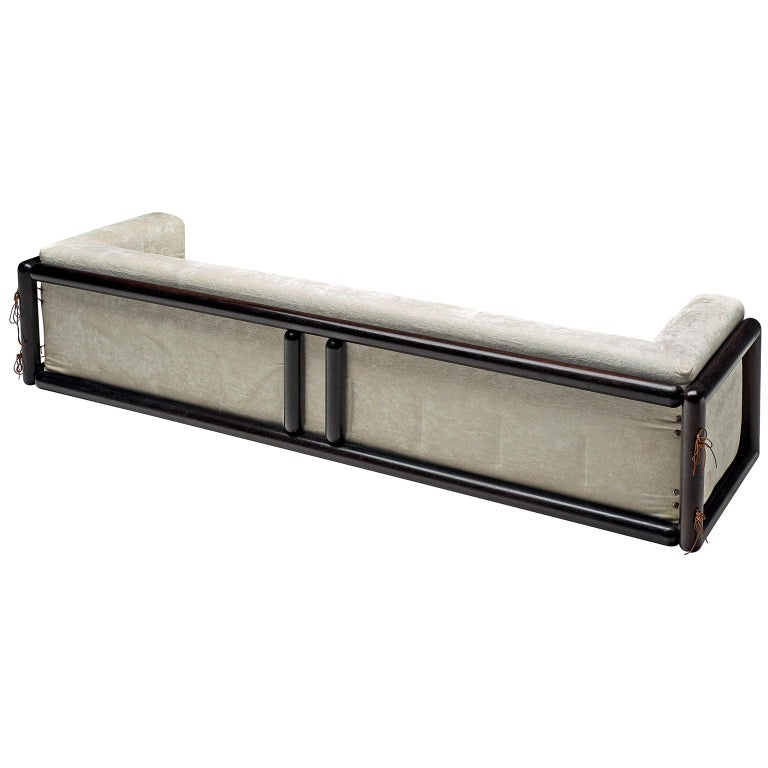 “We have installed a similar sofa in our new showroom in Paris. The proportions and simple design are perfect for a living room in any context.” 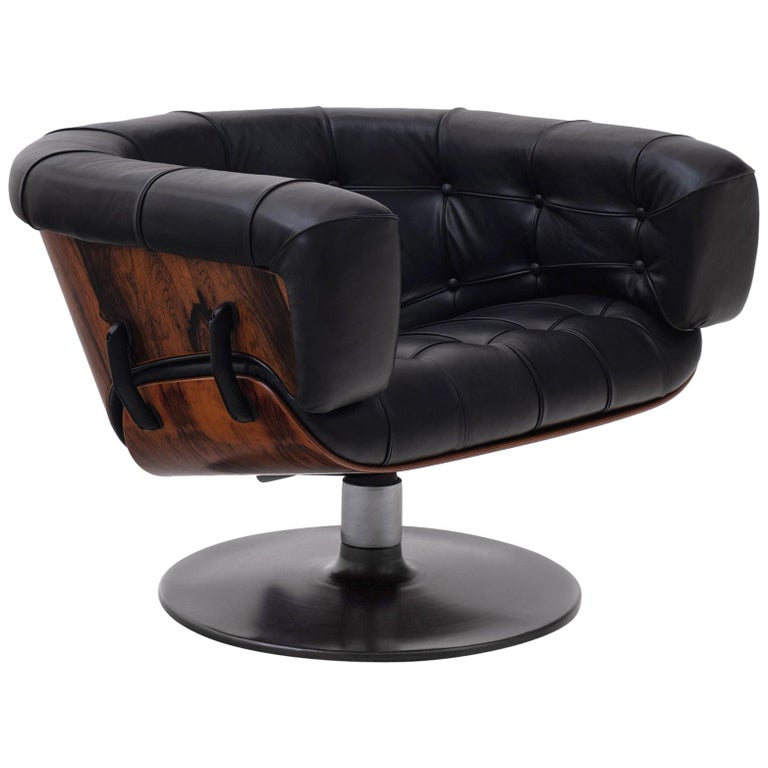 “I love the retro look of this piece. The details of the wood back are just incredibly graphic. Nice to install in a TV room or office.” 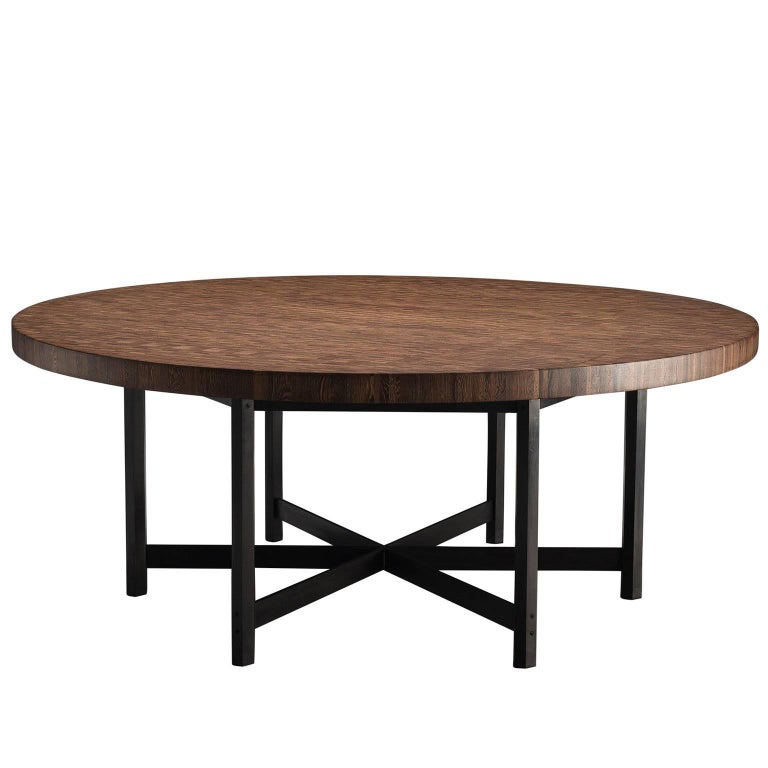 “I discovered Wabbes fifteen years ago when buying the table lamp he designed for Sabena, the Belgian national airline. The shape, simplicity of design and materials of this table are typical of his work.” 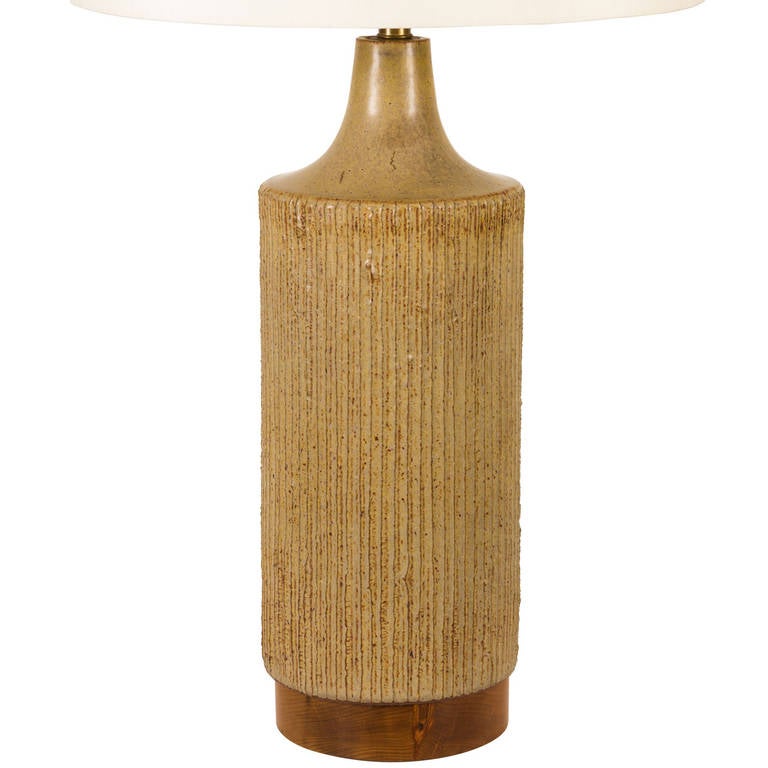 “A raw ceramic lamp with a nice wooden base like this brings warmth into a space.”