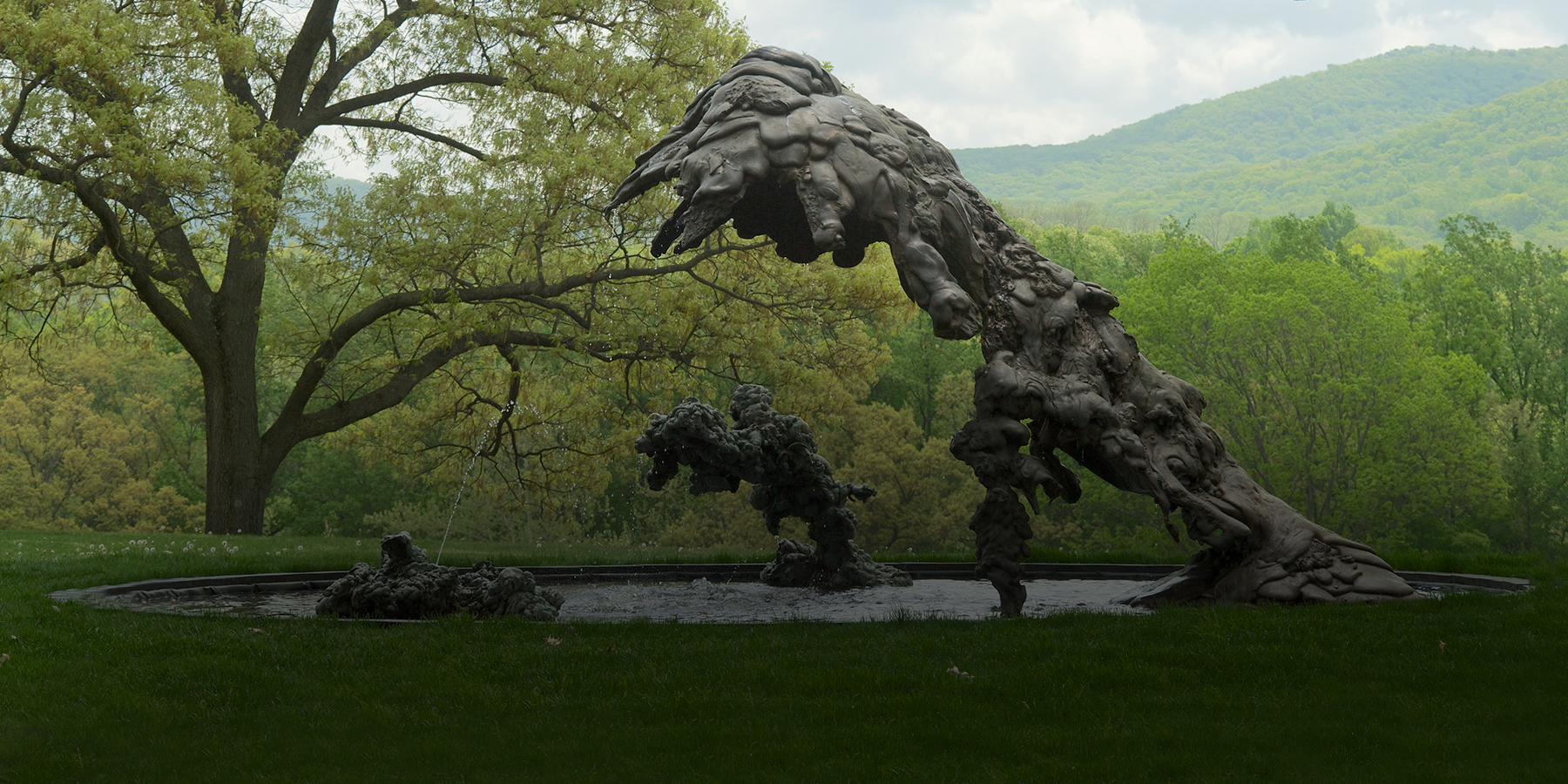 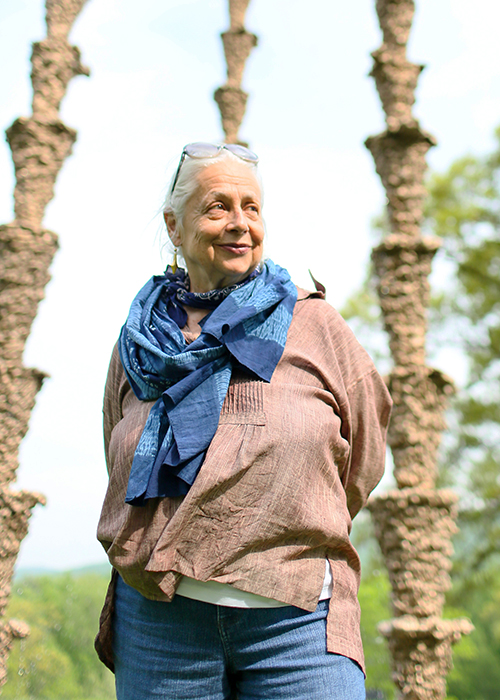 June 1, 2015Born in Louisiana, Lynda Benglis has always found inspiration for her art in her travels around the world; today, she splits her time between New York, Santa Fe and Ahmedabad, India (photo by Max Lakner/BFA). Top: This fountain was based on the mold she used for The Wave of the World, a 1984 World’s Fair commission. All photos by Jerry L. Thompson, © Lynda Benglis/Licensed by VAGA, New York, NY, unless otherwise noted

Notorious for having posed naked with a fake male appendage in a 1974 Artforum ad, among other provocations, Lynda Benglis has always made waves. Fresh off a bus from New Orleans in 1964, she took the New York art world by storm with her renegade tactics, creating visceral piles of foam or pools of poured latex that oozed in rainbow striations over expanses of floor — playfully disrupting the cold, male-dominated realms of Minimalism and Color Field painting with a wallop of female energy.

Now represented by Cheim & Read in New York, Benglis has spent her recent years somewhat more quietly, producing small works of tortured, torqued ceramic that seem to condense and compress all the power of her larger — and certainly showier — objects. But a current show at the Storm King Art Center in upstate New York brings her signature dynamism back to scale, peppering the park’s sprawling 500 acres with sizable sculptures in various mediums. Titled “Water Sources,” the presentation comprises nearly a dozen recent outdoor works and an exhibition of historical sculptures, primarily from the early ’90s, inside the museum building. These offer an apt introduction to Benglis’ visual vocabulary, referencing organic forms and textures that range from the geographic — evoking craggy aggregations of New Mexico’s rock formations — to the fluid, recalling percolations both chemical and bodily. 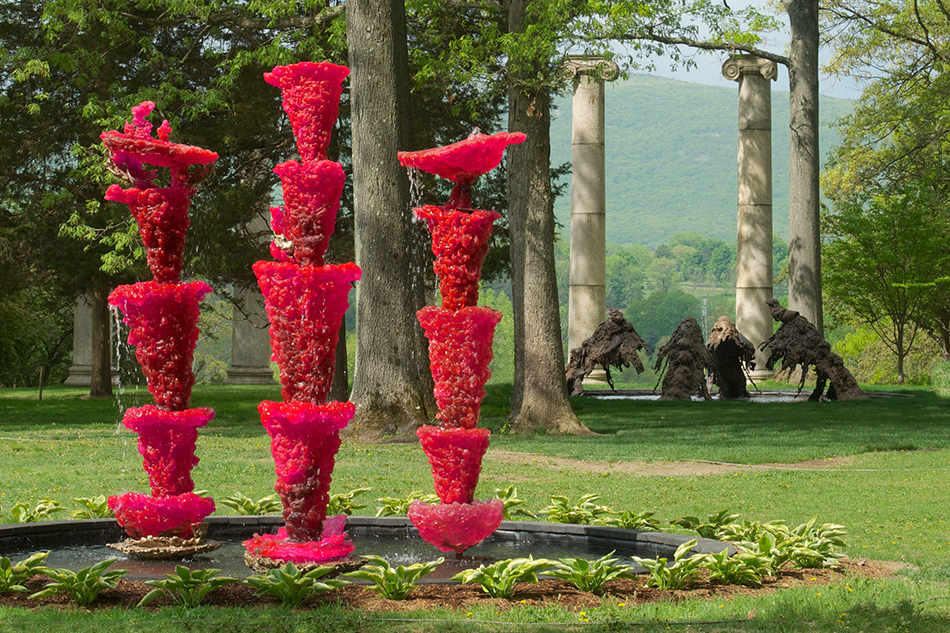 Pink Ladies, 2014, harkens back to the brightly colored — occasionally glitter-dappled — sculptures of the artist’s early days in New York. 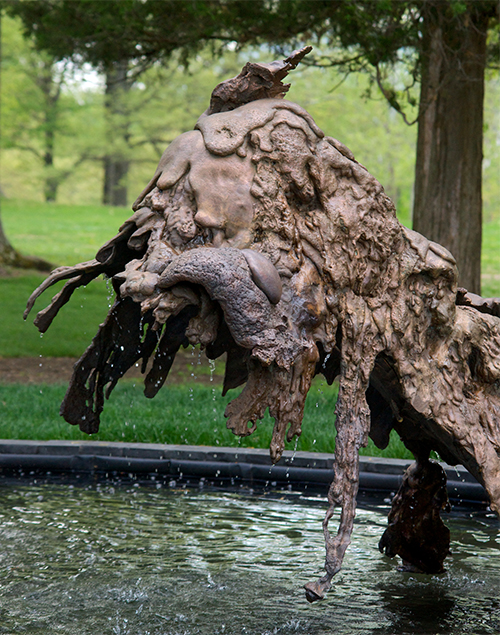 “It’s nice how they kind of sunk into the water like little dragons,” Benglis says, describing the four forms in North South East West, 2009. “But insects is the idea, too — they’re animated with the dripping of the water down their backs and sides.”

“There is a series of little sculptures that are named after real atomic explosions,” Benglis explains at the show’s vernissage, “because I was studying that at the time. And I also thought of moss, and growth and coral reefs — I’m a scuba diver, see. So all of these come out of my various experiences around the world. Some of them could be almost like cacti, too.”

Outside Storm King’s museum building, a series of fountains, each one ringed in stone, anchors the presentation. Crescendo reprises a sculpture Benglis created for the 1984 New Orleans World’s Fair by molding bronze over a weather balloon. Rising out of the water like an armored sea-monster, it reveals an endearingly puckered underbelly. To its left and right are small writhing heaps of piped metal, coated in a patina of gentle green, that Benglis says represent a mother and child.

There is, indeed, something corporeal about them — a human movement that evokes the twist of a torso — yet they are at the same time zoological, even bestial. “I thought of dancers on the surface of the water, like porpoises that you see in the Mediterranean,” the artist continues, her honeyed lilt evidence of a formerly pronounced Southern drawl. In another fountain, North South East West, 2009, a quartet of forms hovers around the pool, bending toward one another like thirsty water buffalo. “They are always delicate, see these delicate little things,” Benglis says, pointing out a baroque flurry of bronze where a classical sculpture might have a head — “but they’re configurative. I use that word to mean ‘with configuration,’ which is very important — to let the mind read in, the way you read into the clouds or tree formations. That leaves my sculptures kind of open.” 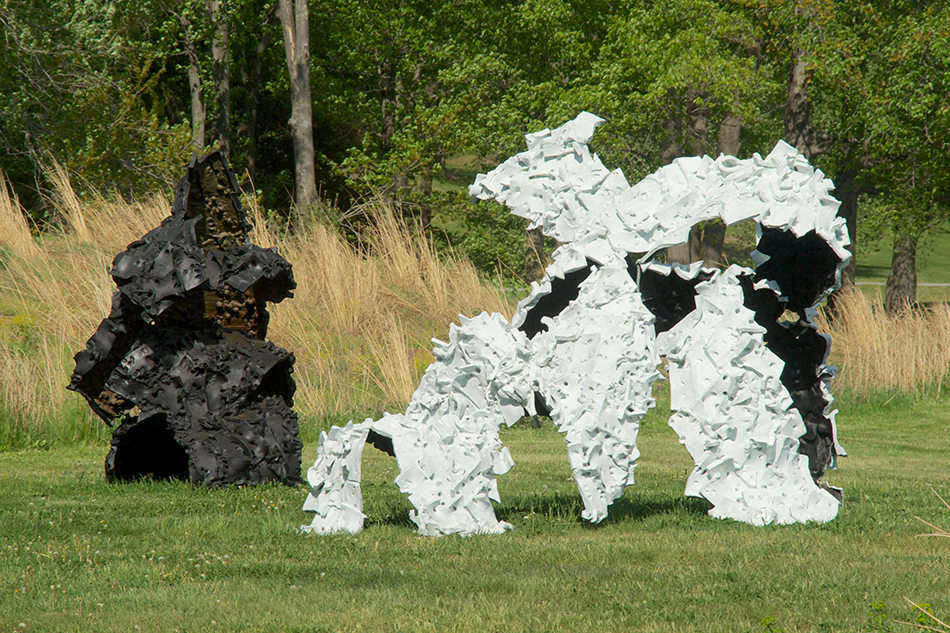 Set against the lush green of Storm King’s well-tended wilderness, the artist’s creations — here, Cloak-Wave Pedmarks and Migrating Pedmarks, both from 1998 — evoke a range of otherworldly beasts. 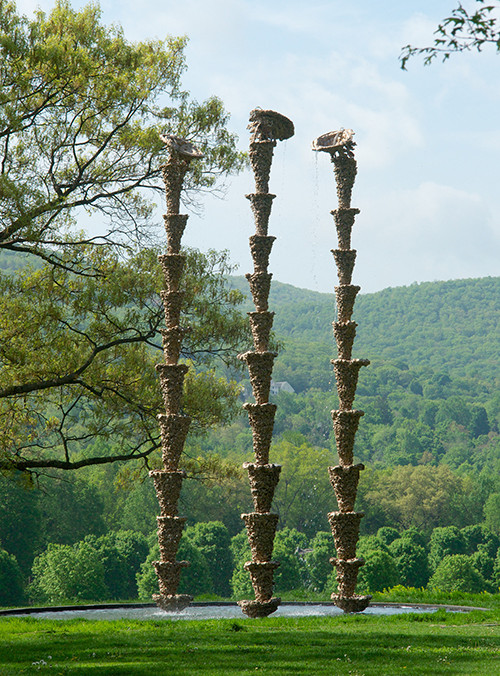 Created at a foundry in Walla Walla, Washington, where Benglis recently purchased a home, the cornucopia-like forms of these stacked fountain sculptures reference the idea of agricultural bounty.

The two remaining fountains introduce a new sculptural motif to Benglis’ arsenal. Featuring tall totems of stacked, cornucopia-like forms, one arrangement includes three golden towers, each slouching slightly. Titled Bounty, Amber Waves and Fruited Plane, 2014, these were produced at a foundry in Walla Walla, Washington, a region known for its wheat export, and they evoke Brancusi’s “Endless Columns” and Giacometti’s gangly figures of hammered bronze. Across the lawn, meanwhile, the semi-transparent, polyurethane forms of Pink Ladies, 2014, are somewhat more lively: Less than half as tall as their neighbors and colored a vibrant neon pink, they seem to be of a distinctly human scale despite their otherworldly hue.

As this installation makes clear, all of Benglis’ sculpture is shaped by a bright, energetic expressionism and a whimsical spirit of improvisation. “Once you put paint on a brush, you move the brush and you draw with it — and it’s the same with metal,” she says. “My work is abstract if I’m not drawing, say, a hippopotamus, or thinking about other kinds of beasts.” And although there is always a measure of intention in the way she sculpts, she appreciates the role of chance: Rather than work in a traditional studio, she explains, she has been collaborating since the early ’80s with a number of metal foundries, in particular the Modern Art Foundry in Queens, New York. “I tell them, make it be natural,” she concludes. “Make it be what it is.”