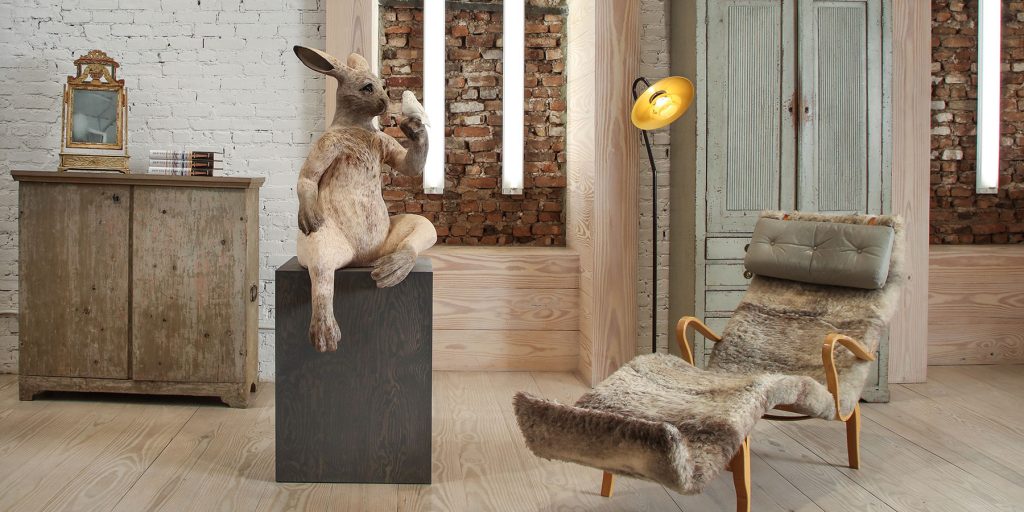 Swedish artist Margit Brundin's large anthropomorphic animal sculptures are on view for the first time in the United States at Dienst + Dotter Antikviteter, in New York. 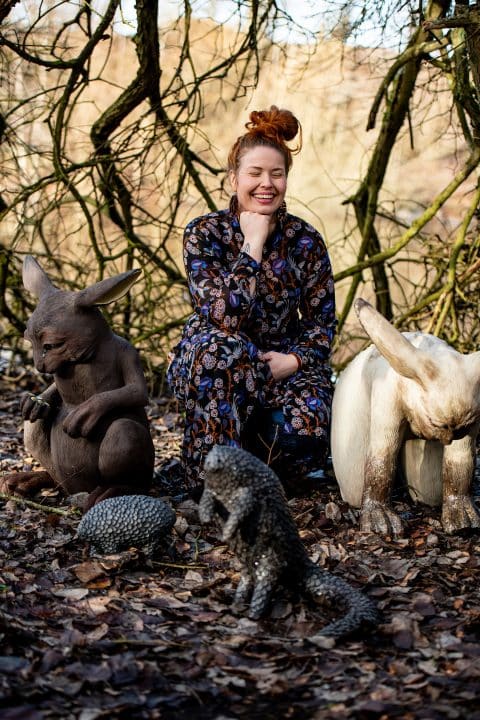 For Swedish artist Margit Brundin’s exhibition “A Place Behind the Oak Tree,” Dienst + Dotter Antikviteter, in New York, has installed 10 ceramic sculptures — of human-size hares — among its elegant Scandinavian furniture, art and objects from the 17th to the mid-20th century. These hares are doing some decidedly human things, in human positions: One is crouched, peering at its reflection in a pond-like mirror; another is seated, looking sympathetically at a bird perched on its hand; and a pair sit, leaning against each other’s backs. These creatures seem, to the human viewer, both familiar and disquieting. And that’s precisely the point, says their creator.

Brundin explains that her figurative sculptures, which are made by building up coils of clay and painstakingly incising the surface to represent fur, “create a narrative of the hare as storyteller. And you can project your own story on them. They invite you to open up your imagination.” 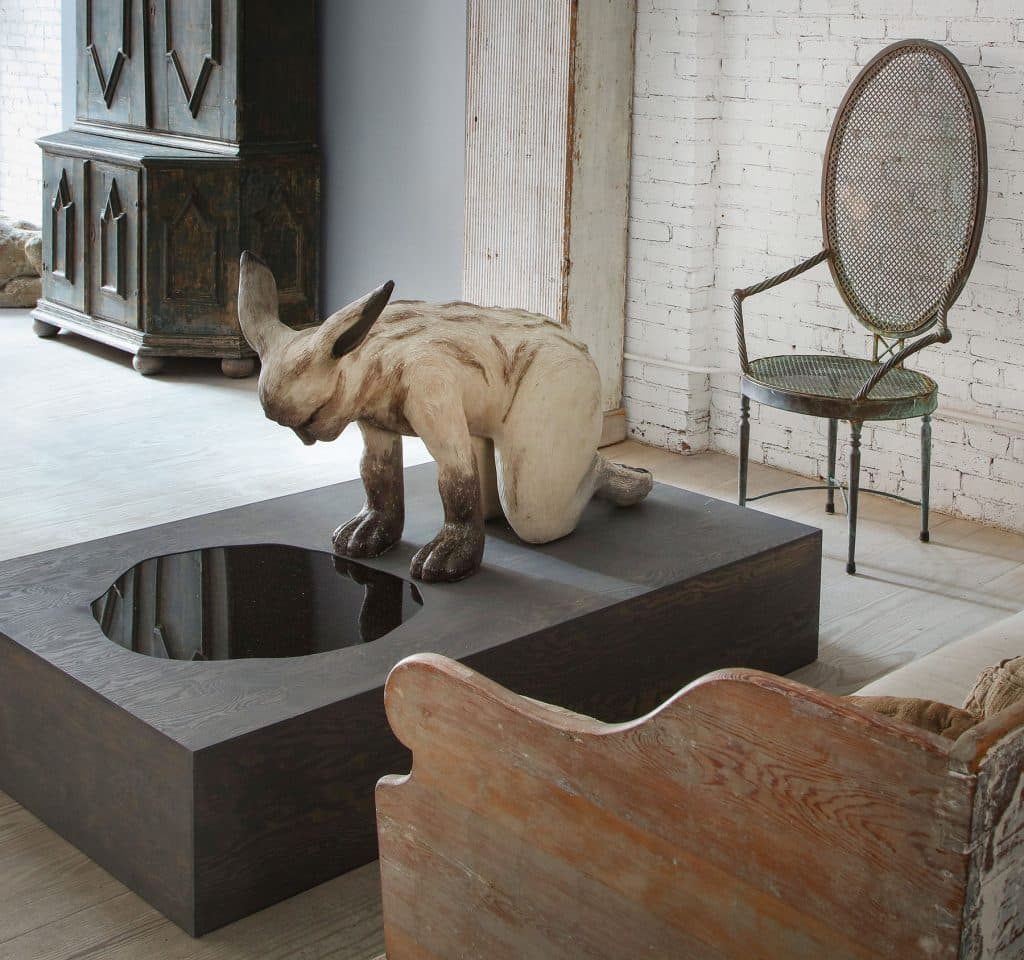 Mirror Mirror, 2018, is displayed among pieces like a ca. 1740 Baroque cabinet and a Gustavian transitional trågsoffa. 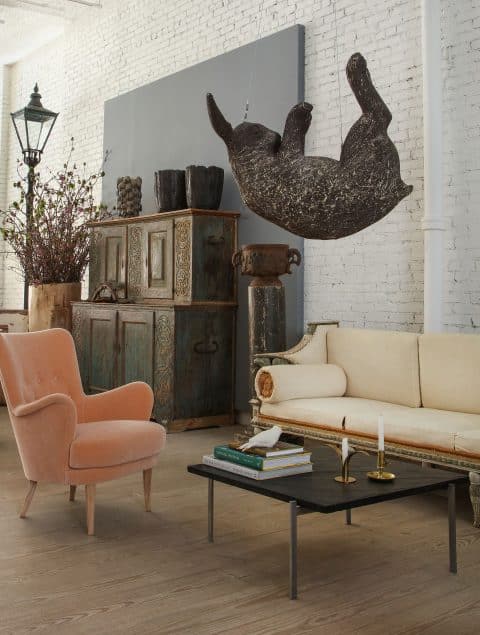 Brundin’s longtime fascination with animals acquired a particular importance when, at age 12, her mother died and her mother’s best friend gave her a horse. “I grew up in the countryside, with lots of animals around me,” she recalls. “This horse became my therapist — there was a wordless relationship between us that affected me and what I do now.” Although Brundin has depicted other creatures in her art, she eventually chose to focus on hares because it seemed easier to give them “a seriousness and emotions.”

Indeed, emotions — and plenty of them — are dramatically evoked in Brundin’s pieces. In Sit Beside Me, a hare is seated on a bench, “ankles” crossed, as if waiting for a companion to come along. In At the End of the Path, another rests on its haunches and looks dejectedly at its upturned paw, the pads of which are glazed a leafy green. The one in Stargazer poses on a bench, legs dangling, and gazes up wonderingly at a suspended moon-like orb. “I wanted him to look amazed at how small we are,” Brundin says. In Lean on Me, she wants the viewer to see that of the two hares who are leaning against each other, “the female has a more focused expression,” while the male stares off into space. Still, she says she created the piece as “a comment on friendship and support.” 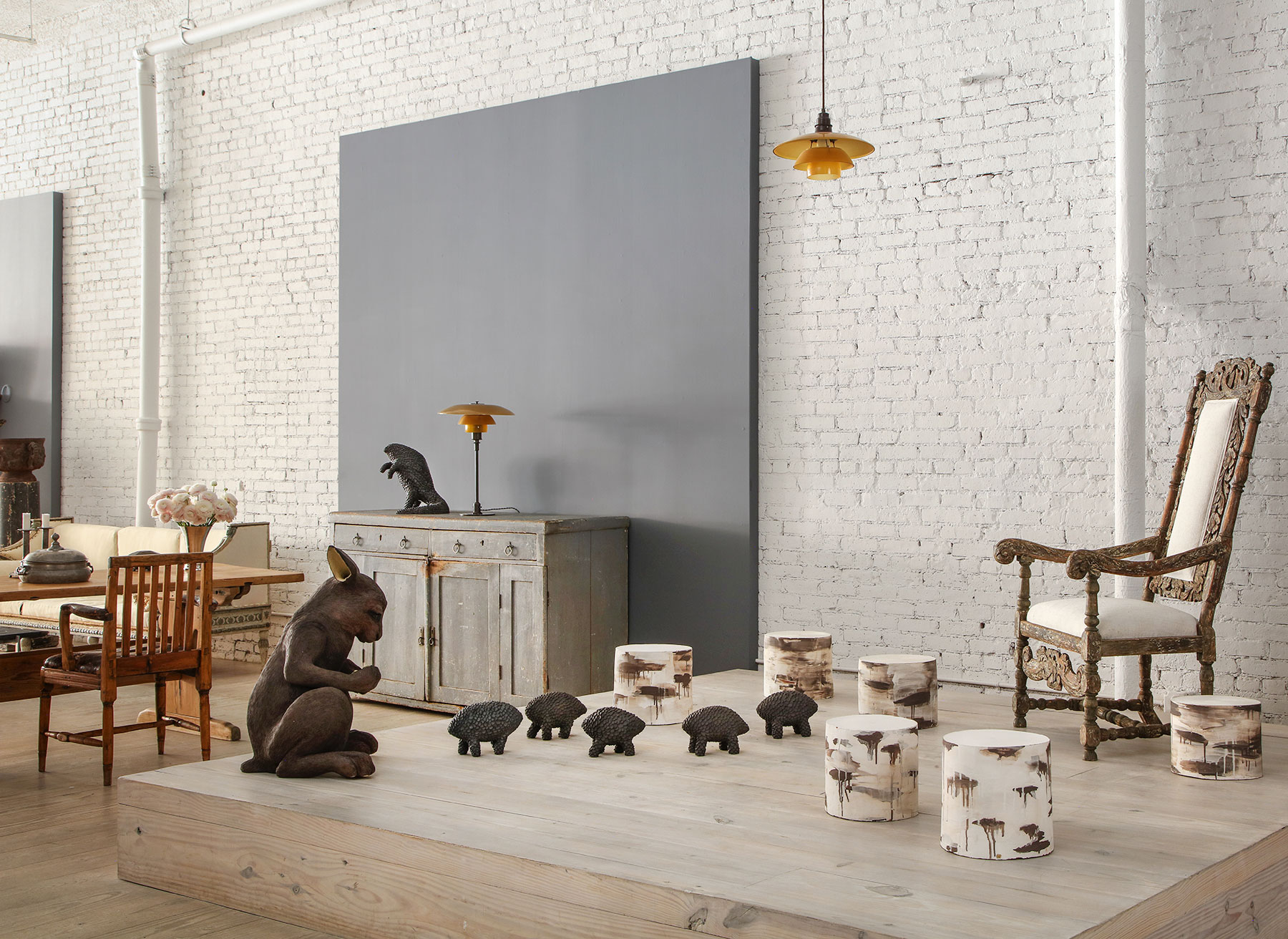 The hare in At the End of the Path, 2015, sits quietly in the foreground across from a ca. 1700 Baroque armchair. Against the back wall, another of Brundin’s works is displayed beside a ca. 1929 Poul Henningsen table lamp on a cabinet. 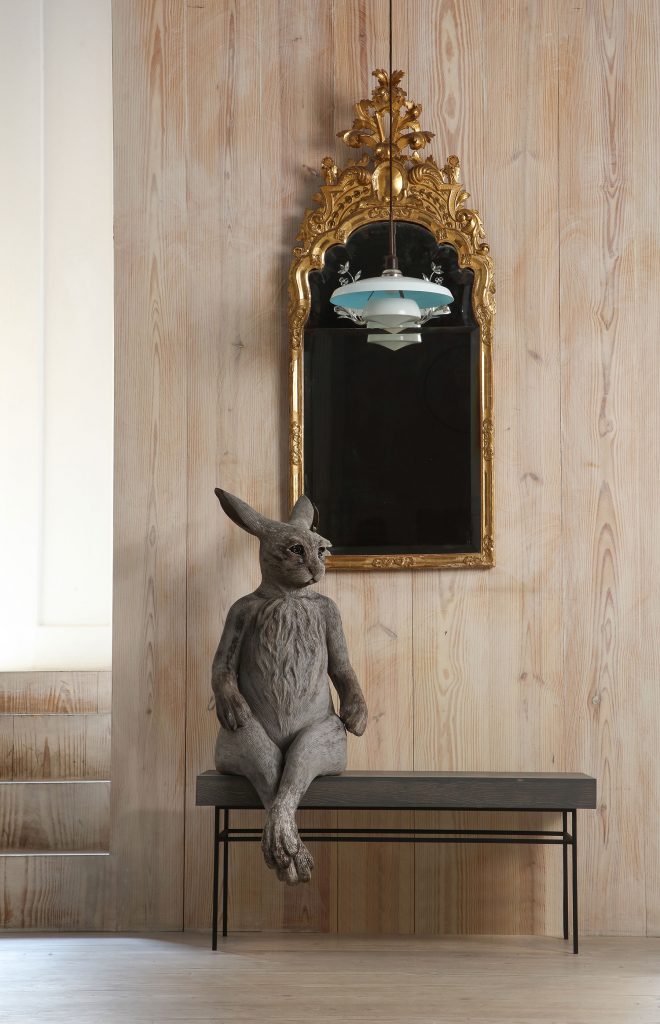 The hare of Sit Beside Me, 2018, perches on a bench below a Baroque mirror attributed to Burchard Precht and an NES pendant light.

Before starting work as a sculptor, in 2010, Brundin spent eight years at art school in Sweden. “I always ended up in the ceramics studio,” she recalls, remarking that clay is “a beautiful material — heavy and fragile at the same time.” Although her work is well received in her native country — Dienst notes that it regularly sells out at exhibitions — Brundin has to rely on government grants and part-time jobs to earn a living. It was through one such job, working as a dresser at the opera house in Malmo, that she met two dancers who happen to be friends of Dienst’s and who told the gallerist that she needed to see Brundin’s work.

A couple of years ago, Dienst visited Brundin’s studio, which is in the south of Sweden, and offered the artist her first exhibition in the U.S. “I fell in love with her work — and with her, which is important,” Dienst recalls. “She and I both love and are fascinated by animals. Animals were her confidants, playmates and friends. She’s emotionally invested in her work.” Nevertheless, Dienst adds, “these pieces are not sweet or sentimental. There’s almost a human quality in their bodies. That connection to nature is very Swedish” — characterizing much of the country’s design, too, she notes.

“You can project your own story on them. They invite you to open up your imagination.” 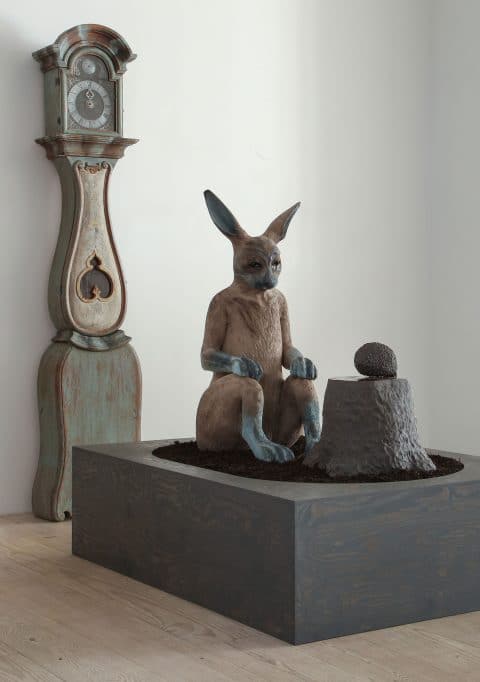 When asked how she chooses the artists whose pieces she exhibits alongside her furniture and objects, Dienst explains, “Their work speaks to me and makes me want to share it. It’s the same as buying a Baroque cabinet — it’s generally not something you’re used to seeing. I don’t have typical Gustavian pieces. Mine tell a story.” The dealer — who worked at the Metropolitan Museum of Art, as well as for the antiques dealer Didier Aaron and with the designer Jacques Grange — finds the traditional boundaries of design and art too restrictive. For Brundin’s exhibition, which runs through Labor Day, she was adamant about mixing the sculptures with the furniture and objects: “My goal was not to show Margit’s work in a white-box setting but rather with my antiques.”

This particular mix makes Brundin’s pieces even more arresting, reminding us that for all our aspirations toward beauty and perfection, we are only human. That realization has long been a part of Brundin’s life. “Being an artist is like being in therapy,” she says, drawing an analogy to the time in her youth when animals offered solace. “I used to have a horse, but now I work with clay.”