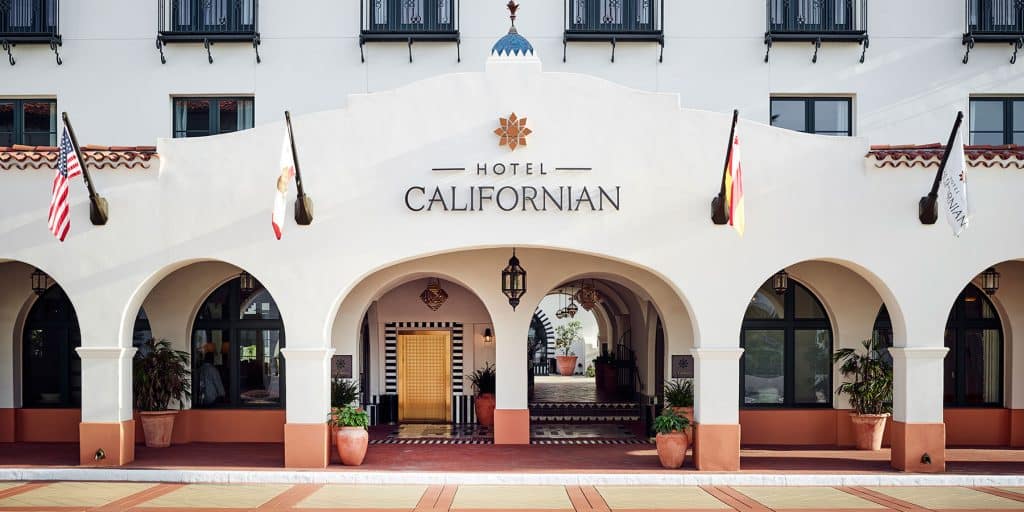 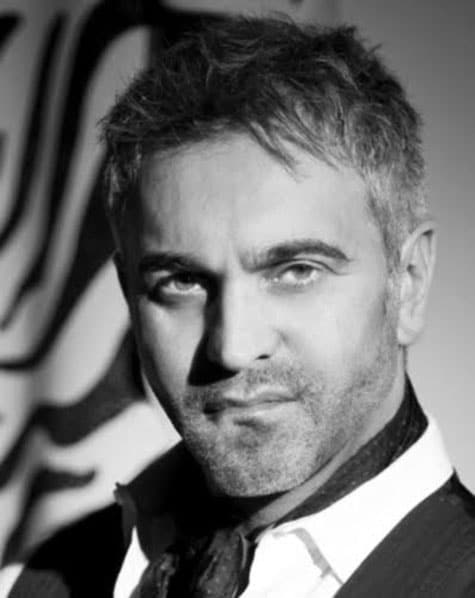 March 19, 2018Martyn Lawrence Bullard says he designed Santa Barbara’s Hotel Californian “as a modern-day fun palace, a resort-like place that captures the old-school glamour of the city and the playfulness of a beach retreat” (portrait by Tim Street-Porter). Top: The hotel’s facade takes inspiration from the local vernacular architecture. All images by Douglas Friedman

Thanks to the aesthetic ingenuity of British-born, Los Angeles–based designer Martyn Lawrence Bullard, a 1925 Southern California hotel has been reborn as a luxe 21st-century urban retreat. Downtown Santa Barbara’s Hotel Californian originally opened only days before a massive earthquake destroyed large swathes of the city, much of the new building included. Subsequently rebuilt, the hotel enjoyed a honeymoon period and then a heyday until the 1950s, when this area of town fell out of favor and began to decline.

The neighborhood, known as the Funk Zone, became something of an artists’ enclave. Over the past decade or so, it transformed into a popular, vibrant district filled with restaurants, bars and shops, and interest in the hotel’s site rekindled. Now, after a six-year redevelopment, the property has emerged as a 121-guest-room retreat, newly created but for the preserved facade, conceived in the region’s signature Spanish Colonial style.

For the rooms, suites and other spaces and amenities — including a rooftop pool and terrace, a ballroom, a gourmet bakery and café and a Mediterranean restaurant helmed by an alum of Napa’s French Laundry — Bullard custom designed nearly every element. Using the region’s local vernacular architecture as a jumping-off point, he created a version of Spanish Colonial that draws heavily from North Africa, swinging to the southern portion of the Iberian Peninsula and its telltale Moorish influences. These he combined with accent furnishings of an Italian mid-century-modern style, some of them actual vintage pieces, others designed by him in homage to the period.

Here, Bullard takes us on a tour of the old-meets-new hotel’s globe-spanning design. 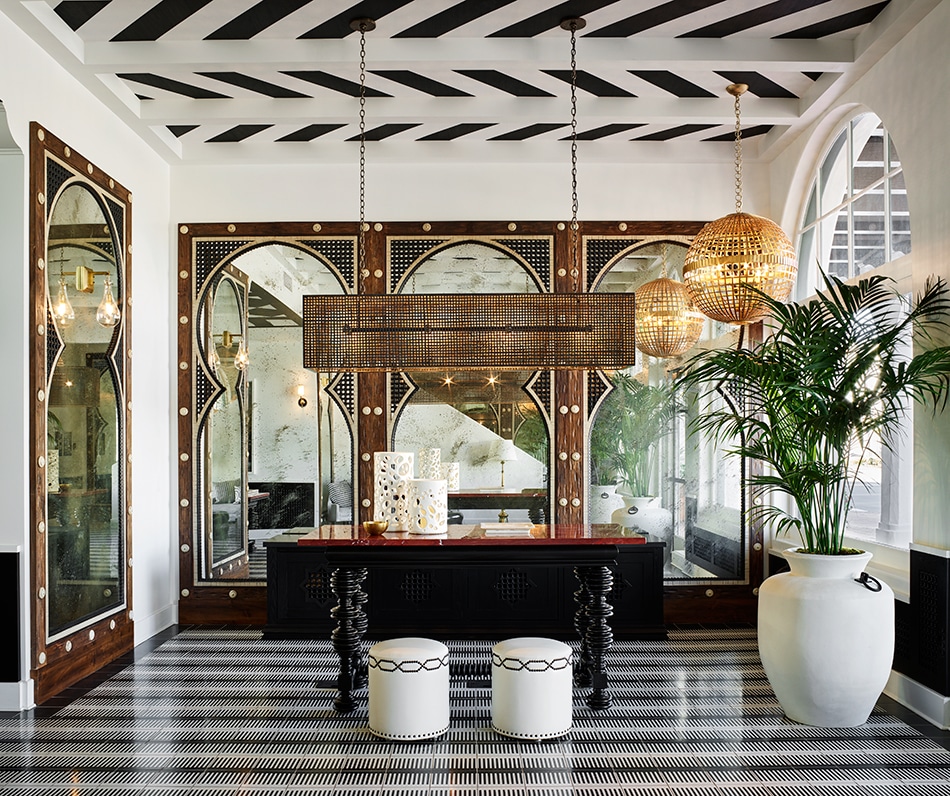 Throughout the hotel, Bullard spun a version of Spanish Colonial Revival style that drew heavily from the Moorish design influences found in the southern part of the Iberian Peninsula. Grenada’s Alhambra palace was a touchstone. 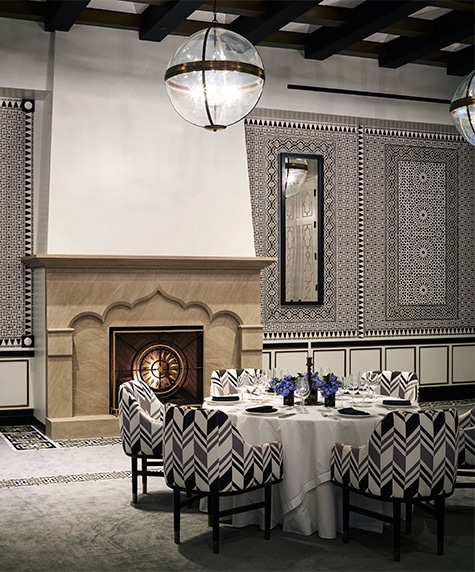 In the ballroom, Bullard covered the walls with different papers from his collection for Schumacher. He cut them in various sizes to craft what he calls “the magnificent mix-and-match look of the walls of a Moroccan palace.”

The goal was to create a new standard of hotel design for Santa Barbara, incorporating the feeling of the historic building, even though only a relatively small portion of its exterior was kept, and constructing around that a resort that felt original to the site yet fresh in its outlook and aesthetic level. The idea is one of restoration, something that disguises the fact that the property is almost a complete new build. We achieved this with historically based design motifs and vintage vibes for the furnishings.

Overall, I designed the hotel as a modern-day fun palace, a resort-like place that captures the old-school glamour of the city and the playfulness of a beach retreat. At the same time, and most importantly, I wanted it to express the joy of the renaissance that the city is currently experiencing — from its local wine-tasting possibilities to its fashion, design and beach life — especially in the Funk Zone.

The style was derived from the Spanish Colonial architecture that defines the aesthetic of Santa Barbara, whose beautiful mission was a major point of departure for the design. I wanted to borrow from this but spice it up to capture the imagination of today’s traveler. To do so, I added in an eclectic mix of Moroccan influences, pairing them with Italian mid-century furnishings and original, edgy art, most of it designed by my studio. The result is a sort of “Giò Ponti goes to Marrakech and then does a Californian beach resort” look. It’s totally unexpected, yet totally inviting and intriguing — just like all good vacations should be. 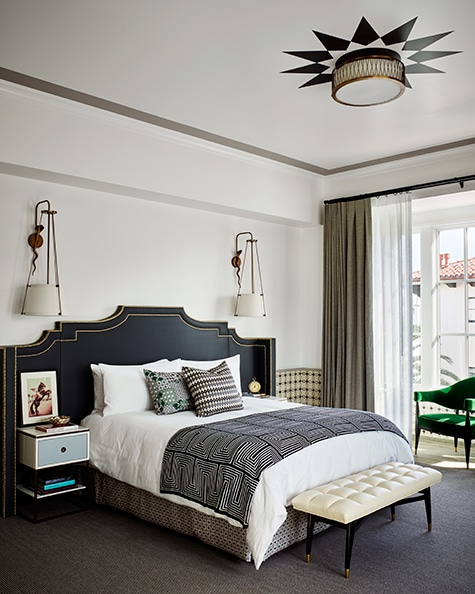 The bedroom of the more than 1,700-square-foot Presidential Suite features walls wrapped in tiles and a headboard designed expressly for the hotel by Bullard.

The palette is based on bold black and white contrasts, with pops of emerald greens, eggplant purples and saffron yellows. Many patterns punctuate the spaces, although mostly in tile work rather than fabrics. This is a nod to the historic elements of the architectural style, but the colors make it totally fresh and exciting.

The ceilings. Each public space has a larger-than-life design emblazoned atop it. The main lobby is done in a magnificent black-and-white Moorish design inspired by Spain’s Alhambra palace. Its moldings are deeply stepped, creating a particularly dramatic effect. In the historic lobby, I took the floor-tile design from the entry and blew it up by a hundred times, then had it stenciled on the ceiling, making a strong statement that really differentiates the hotel from any other.

Almost everything in the hotel is bespoke — the furniture, the fabrics, the wallpapers. Even the almost one million encaustic tiles used throughout the public areas and guest rooms were all custom designed, colored and manufactured for this project. 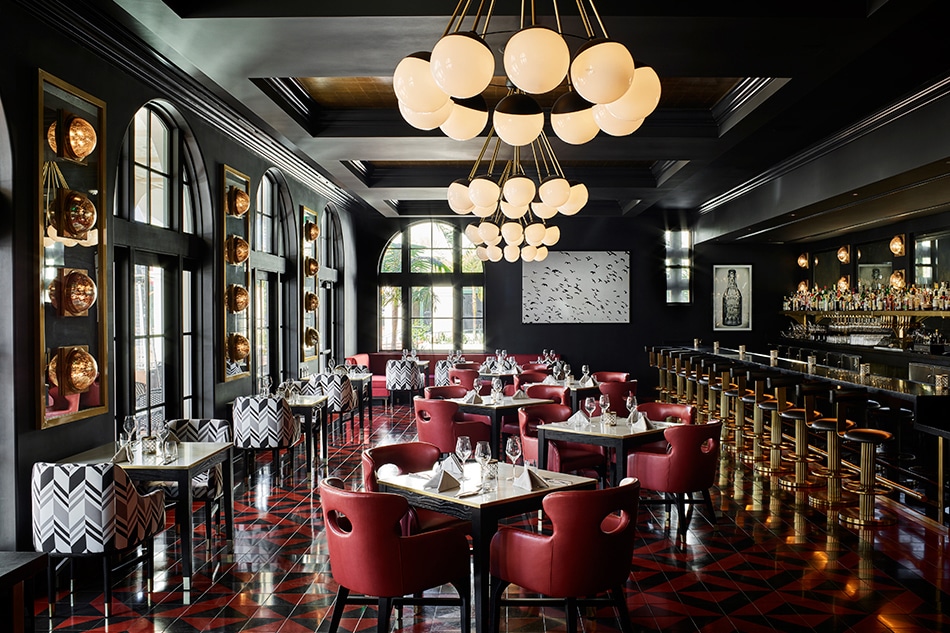 For the hotel’s Mediterranean restaurant, Blackbird — overseen by a former chef de partie at Napa’s French Laundry — Bullard designed custom pieces inspired by mid-century Italian furniture. He borrowed the look of the merlot-colored seats from Giò Ponti armchairs created in 1950 for the Italian cruise ship the Augustus. 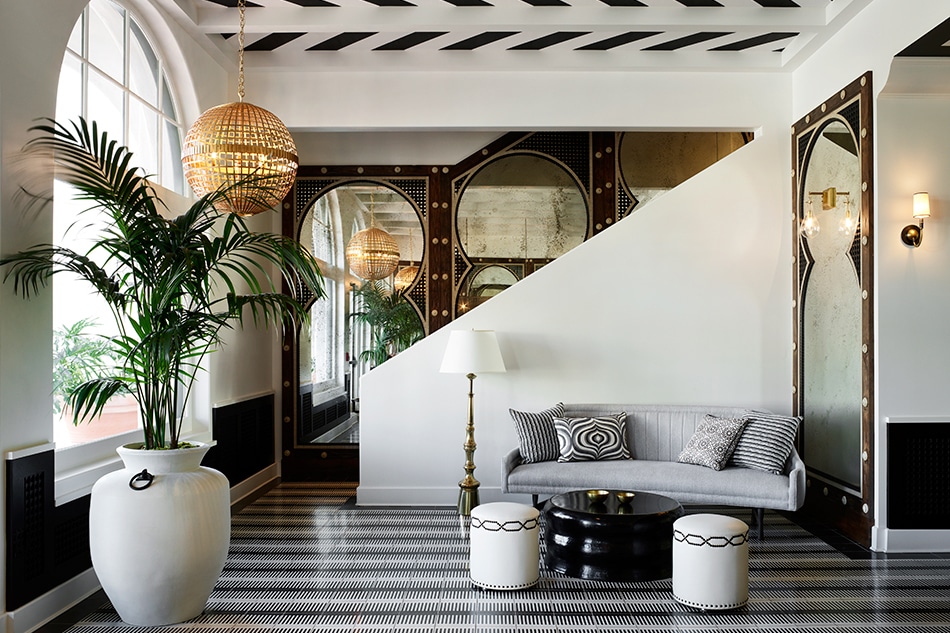 In another part of the light-filled lobby, Bullard paired a mid-century modern sofa from Lawson-Fenning with an Arteriors table and Moorish mirrors from his own MLB Atelier. 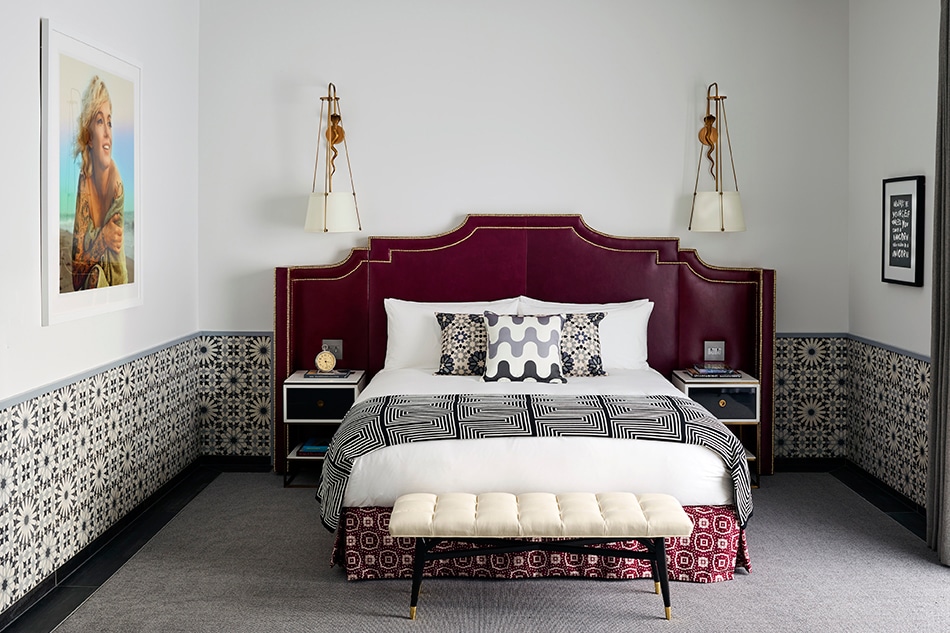 Bullard says he based the hotel’s palette “on bold black and white contrasts,” with pops of particular colors, including the eggplant purple seen in this guest room. The wall sconces are a custom creation by the designer for Corbett Lighting. 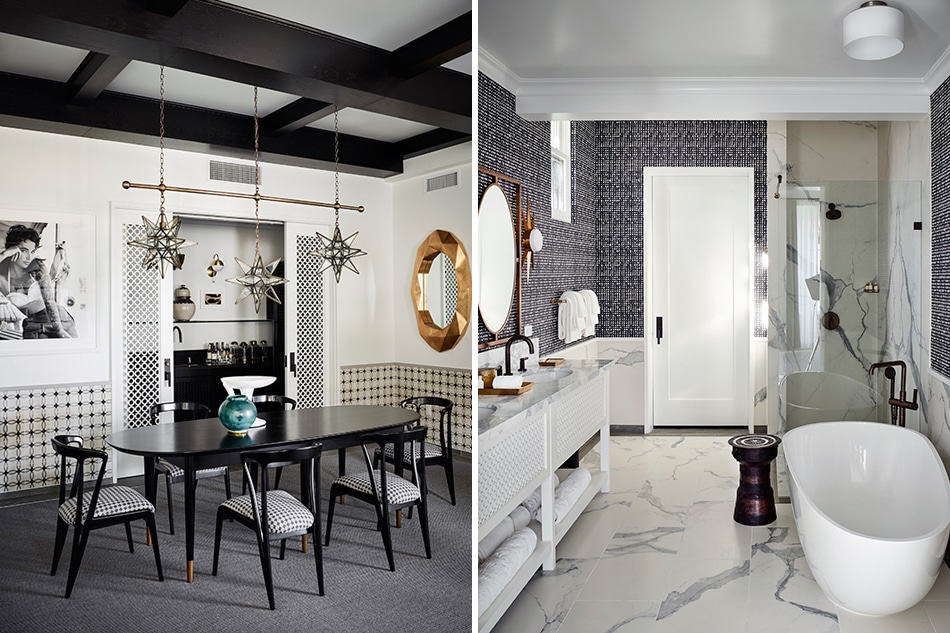 Left: In the Presidential Suite, Bullard is particularly proud of the carved mousharbia panel screens that conceal the wet bar. Right: The suite’s bathroom features Kallista fixtures and a vintage rain drum used as a table or stool. 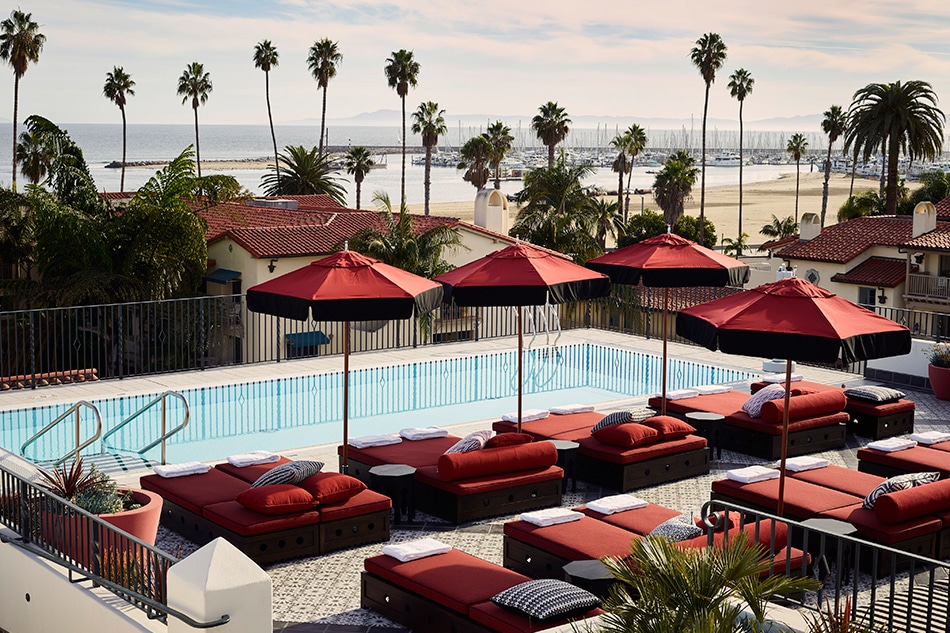 The hotel’s rooftop pool and terrace afford views that Bullard says are “unsurpassed in Santa Barbara” of the beach, the ocean, the hills and the rest of the area, including the city’s mission and surrounding vineyards. 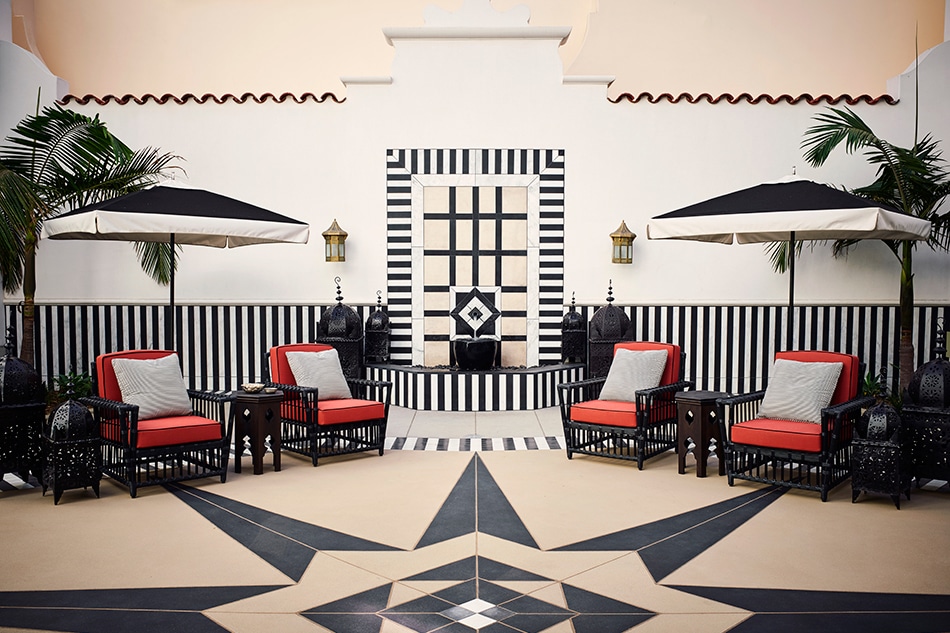 On the patio of the spa at the hotel, Bullard placed several candle-lit Moroccan lanterns of different sizes among the woven-rattan outdoor club chairs. The seats are based on a 1950s design and fitted with deep-terracotta-colored cushions. 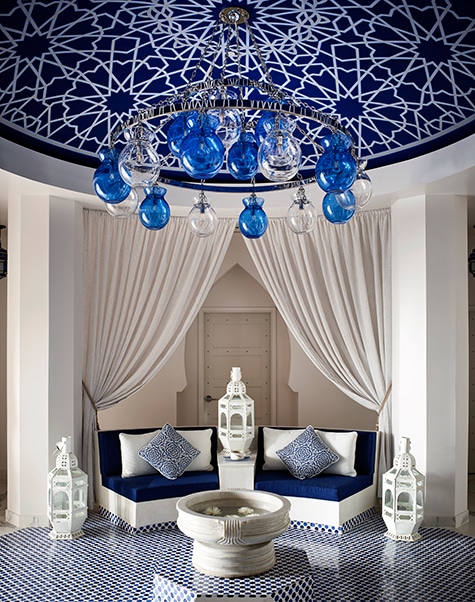 White-painted lamps from Marrakech line the tile-covered floor in the hotel’s spa. The ceiling design was painted by hand, while the chandelier is by Bullard.

I got some cool mid-century modern chairs, side tables and lighting on 1stdibs for the lobby spaces, finding Giò Ponti chairs at Los Angeles’s JF Chen; lighting from the 1940s, fifties and seventies at Palm Springs’ Fabio Ltd; forties Italian side tables from New York’s John Salibello; and fifties French lamps at Craig Van Den Brulle, also in New York. There are Italian club chairs from the fifties and Vladimir Kagan swivel chairs from the sixties, too. These original vintage pieces give an added element of authenticity to the space. They provide a layer of patina and an eclectic but curated vibe that I think is a vital ingredient in a boutique hotel.

I’d say it’s the wallpaper installation in the ballroom. I combined different wallpapers and borders from my collection for Schumacher, hand-cutting them in different sizes to create the magnificent mix-and-match look of the walls of a Moroccan palace. I then added carved-wood roundels and exotic mirrors, all applied directly to the walls and framed by the wallpapers. This decoupage is truly splendid, a labor of decorative love.

There are so many great and unusually spacious rooms in the hotel, many with their own balconies and breathtaking views. A particular favorite of mine, though, is the Presidential Suite, not because of its grandeur of size — 1,700 square feet! — but because it’s such a fun place to stay with friends for the weekend. It’s got two bedrooms, a large terrace an a private entrance. Among my favorites of the suite’s design features is the pair of beautiful carved mousharbia panels hiding the wet bar and the fifties-style club chairs. They offer a particularly cozy, homey environment for entertaining. 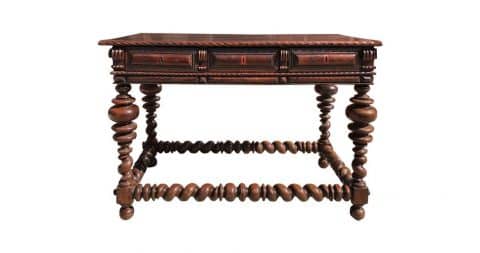 “This rosewood table has the vibe of those I used in the hotel’s lobby. The quirky Portuguese style is a fun element that’s so exotic and unexpected.” 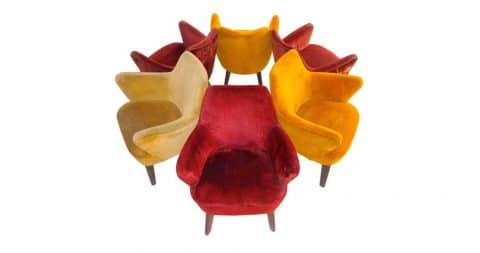 “These Giò Ponti chairs, originally designed for the Italian cruise ship the Augustus, were the direct inspiration for those used in the hotel restaurant and guest suites. Their classic mid-century style is both refined and very comfortable.” 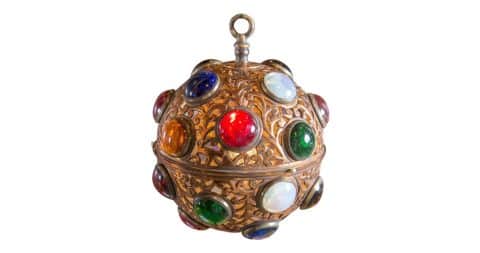 “This lantern offers all we expect from a Moorish interior, but the colored-glass inserts create an unexpected pop of color and a modern design element.” 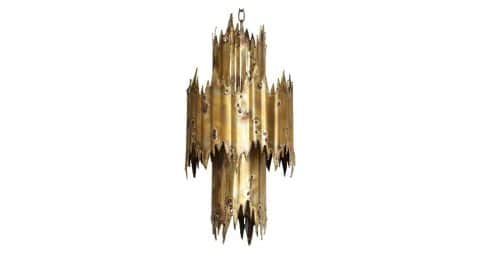 “Similar to one that I used in the hotel’s historic lounge, this Brutalist chandelier has an edge to it that’s again unexpected. Here, there’s almost a tribal feeling that adds a layer of drama.” 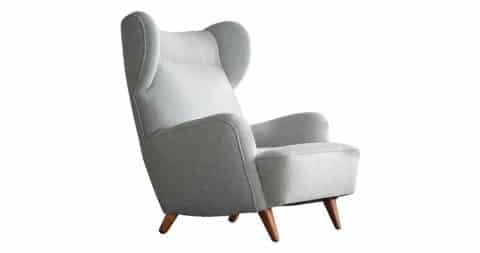 “This chair has a look that defines much of what I developed for the hotel: architecturally shaped forms that make a statement and are welcoming and completely comfortable.” 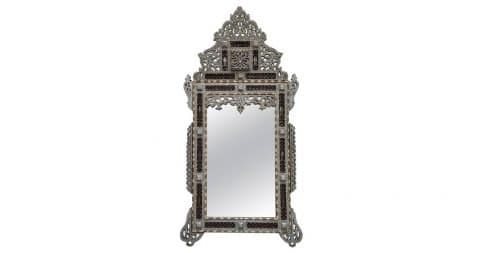 “The Syrian mirror has all the elegance of an ancient culture and simultaneously creates a magical, exotic orientalist vibe in any space. I used similar mirrors to add both drama and romance.”