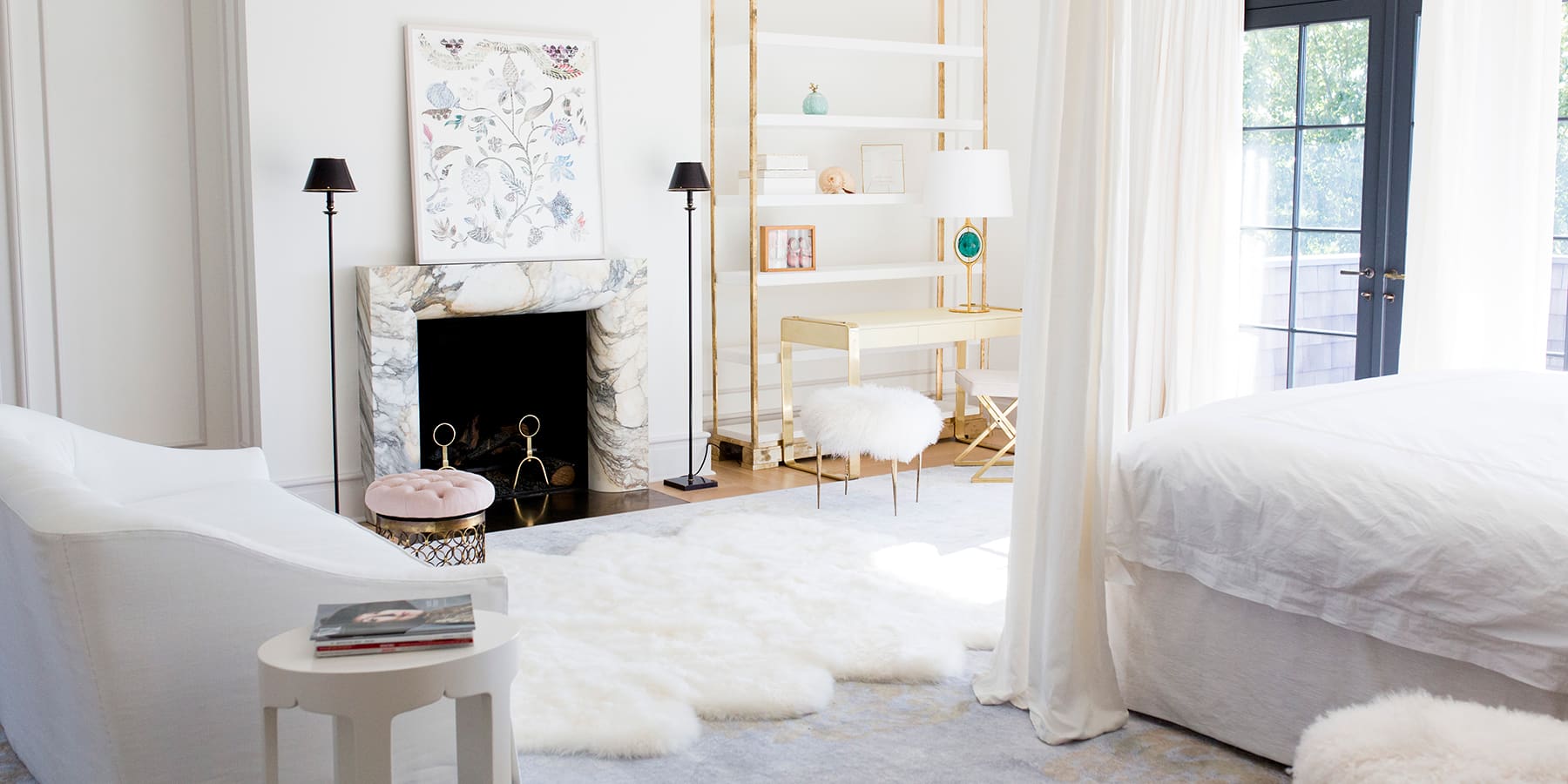 Michael Aiduss Is a Man for All Houses

The interior designer creates tailored spaces that delight his clients and exude a sense of timeless luxury. 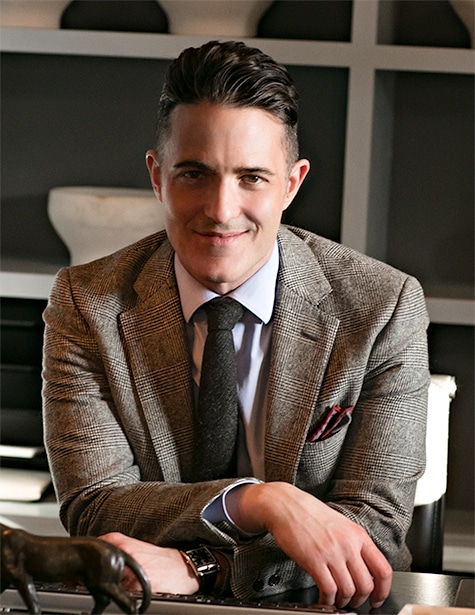 New Jersey– and New York–based designer Michael Aiduss personalizes his clients’ exquisite, luxe interiors to carefully fit the way they want to live (portrait by William Heuberger). Top: In the master bedroom of a home in Watermill, New York, on the East End of Long Island, Aiduss combined a bed, sofa and mantel of his own design with pieces from Phoenix Gallery and the Antique & Artisan Gallery (photo by Grace Brown).

Beautiful houses have always obsessed Michael Aiduss. As a boy, he used to spend hours sketching floor plans and figuring out the layouts of buildings, and how he’d make them better. Such a monomania might have distressed some parents — go out and play some ball, son! — but Aiduss’s mother and father encouraged him because they too were obsessed. “Every vacation was spent visiting a historic property somewhere in the U.S.,” he recalls. “We really studied what was out there.” The members of the Aiduss clan applied what they learned in the renovation of their own historic house, in Nutley, New Jersey, which they completed just as Aiduss finished high school. He then went off to study interior design at FIT, afterward joining the Soho studio of Thomas O’Brien, the renowned designer and home furnishings entrepreneur, where he worked for 14 years.

Today, Aiduss — who now has his own thriving interior design practice based in a former lacrosse-netting factory in Montclair, New Jersey, as well as a satellite office on the parlor floor of a historic townhouse in midtown Manhattan — considers those early family outings formative. “That was how I developed my point of view: by embedding myself in classicism and understanding, at least from an American perspective, the basis for architectural balance and order.” If Aiduss sounds a bit like an academic, rest assured he’s anything but stuffy. He’s a boyish-looking, down-to-earth fellow who just gets serious when discussing how he grew from a design-consumed youth into a consummate design professional.

In a creatively luxe twist, Aiduss hung silver platters from a Paris hotel over the custom-designed table and banquette in the breakfast area of a home in Essex Fells, New Jersey. Photo by George Ross

In many respects, Aiduss is a rare bird. Some interior designers are essentially decorators, individuals with a certain flair for making rooms inviting and personal through felicitous arrangements of furnishings and objects and choices of color, pattern and material. Others have a gift for rethinking layouts, rerouting mechanics, devising new moldings and the like. Aiduss excels at both. In addition, he has a knack for envisioning what will delight his clients about their homes both on the day they move in and as their years there unfold. That last bit requires some good instincts but even more research. Aiduss asks his clients to answer hundreds of highly detailed questions about their lives and routines. It may seem like prying minutiae, but, oh, the end result: homes exactingly tailored to their owners’ dreams. “The client,” Aiduss says, “should be in the design.”

One of his firm’s first projects was working on a newly constructed 39,000-square-foot stone pile in the “backcountry” of Greenwich, Connecticut. Called Westerleigh, the house was based on the work of late-19th- and early-20th-century British architect Sir Edwin Lutyens, with grounds inspired by a Gertrude Jekyll plan. “The owners, a sophisticated semiretired couple in their sixties with children and grandchildren, hadn’t originally anticipated such a big house,” says Aiduss, “but when you design one with proper hallways, you end up with something really big.” Over a period of 10 years, the house became the couple’s pet project, on which they acted as general contractors, skillfully overseeing the complex construction. But when it was time to finish the interior, they were exhausted. The number of decisions still to be made was overwhelming, especially as this pair were not just Anglophiles but true romantics who wanted a home with rooms as richly evocative as those of Manderley, the fictional mansion in Rebecca, the Daphne du Maurier novel turned Alfred Hitchcock film. 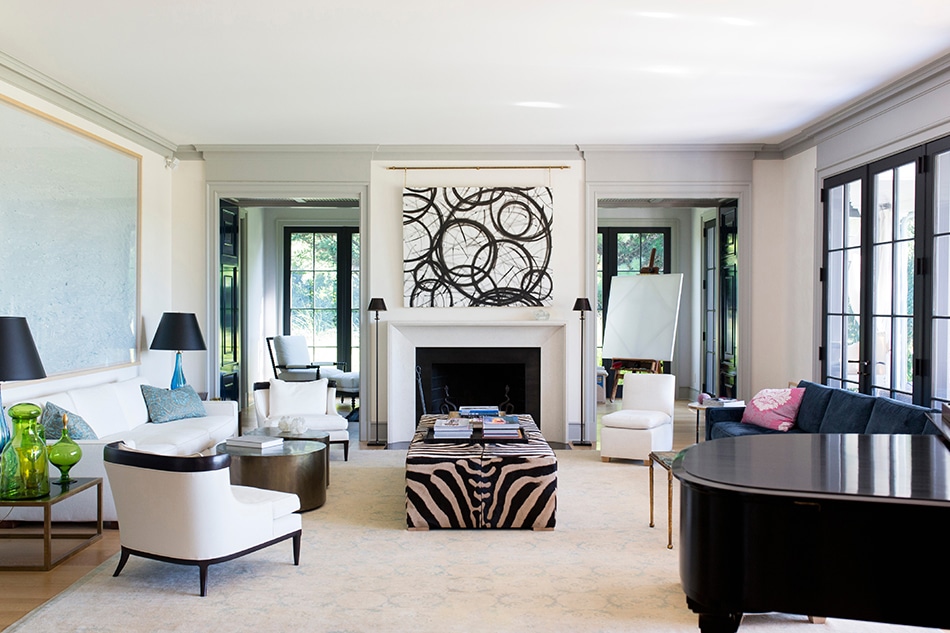 The light-filled living room of the Watermill home combines custom sofas of Aiduss’s own design with Erwin-Lambeth slipper chairs, ca. 1960, from the 1stdibs showroom at Manhattan’s NYDC; vintage turquoise Murano glass lamps from John Salibello; and a bronze and aquamarine-colored onyx table, ca. 1970, from Bardin Palomo. The artwork about the mantel is by Karen Tompkins. Photo by Grace Brown 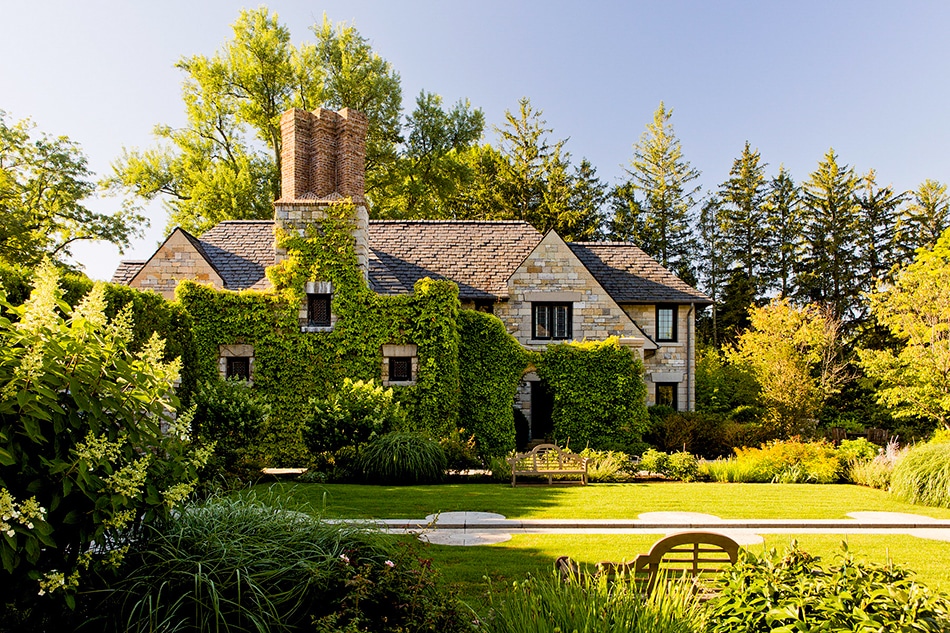 Shortly after starting his own studio, Aiduss began work on Westerleigh, a 39,000-square-foot new-build residence in Greenwich, Connecticut’s “backcountry” inspired by the grand English architecture of Sir Edwin Lutyens. Seen here is the property’s guesthouse. Photo by George Ross 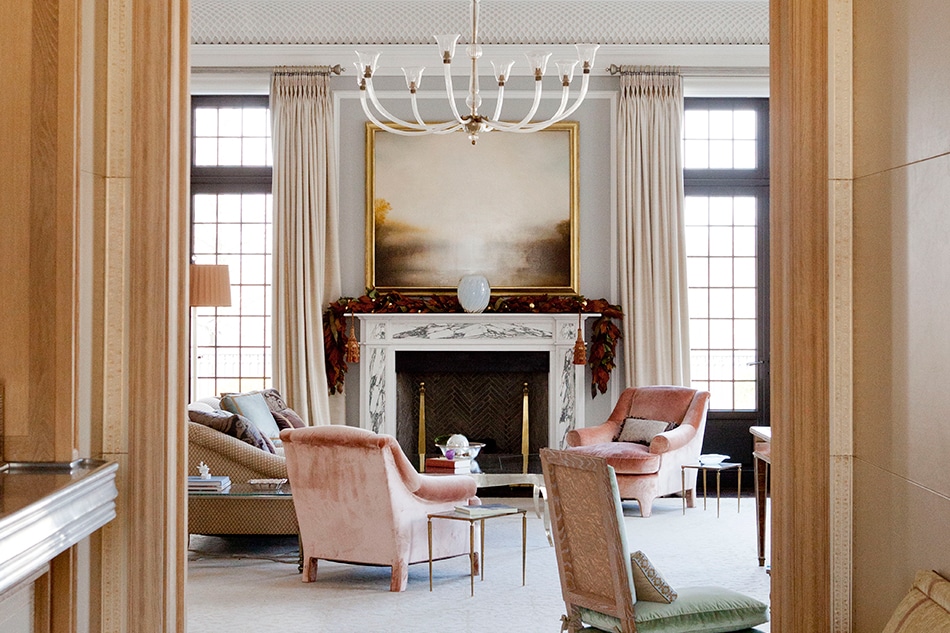 Aiduss selected a ca. 1940 Murano glass chandelier from Lee Calicchio for the Westerleigh living room. A work by Hiro Yokose holds pride of place over a mantel designed by Aiduss and made in London. Photo by George Ross 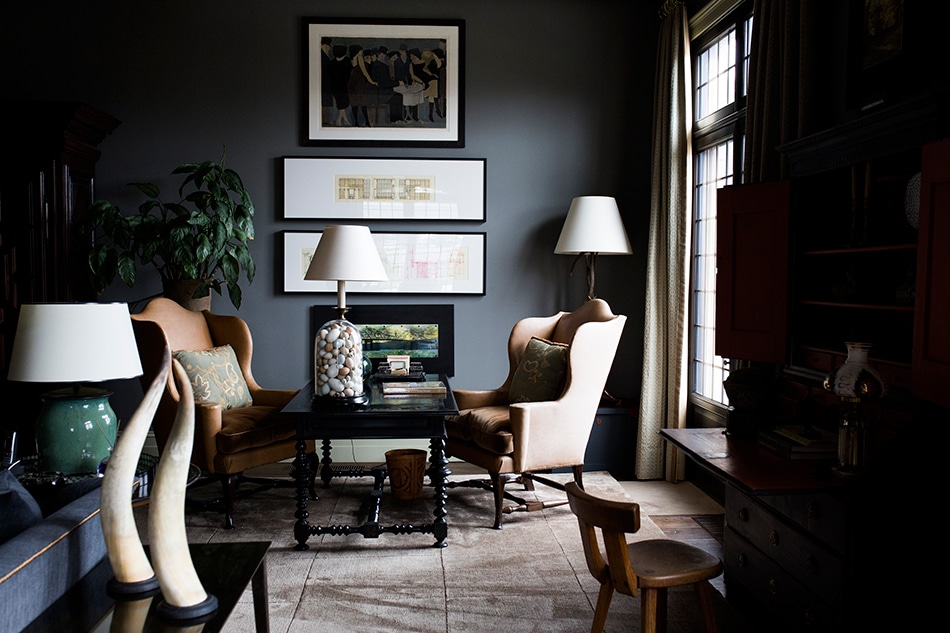 In the family room of Westerleigh, a pair of leather wingback chairs flank an ebonized desk by Rose Tarlow. Photo by Grace Brown 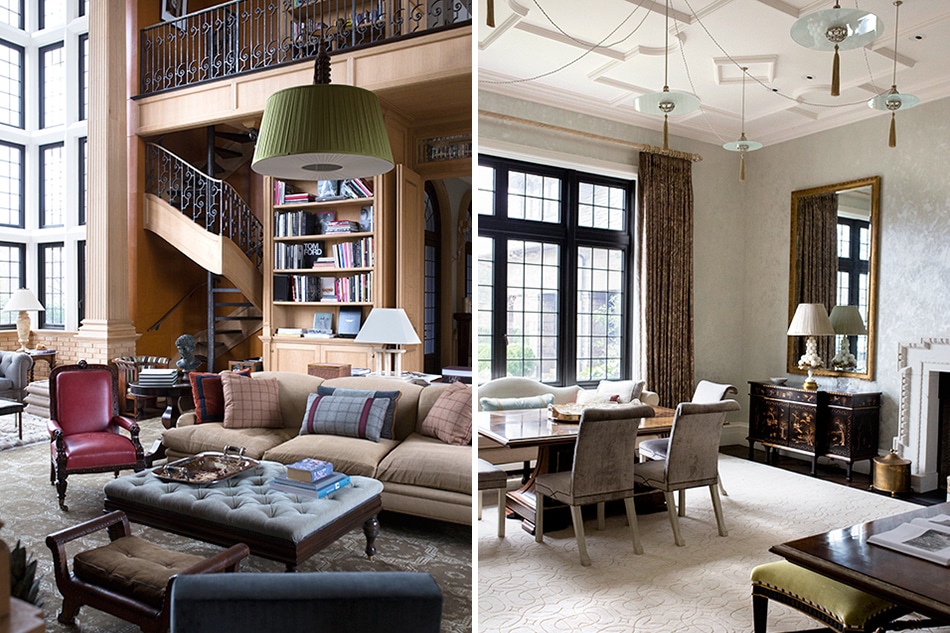 Left: Westerleigh’s library features a custom silk hanging lamp of Aiduss’s own design, which he had made in Florence, Italy (photo by Grace Brown). Right: In a direct nod to the home’s architectural inspiration, Aiduss hung reproductions of Lutyens’s Cardinal Hat lights in the dining room at Westerleigh (photo by George Ross). 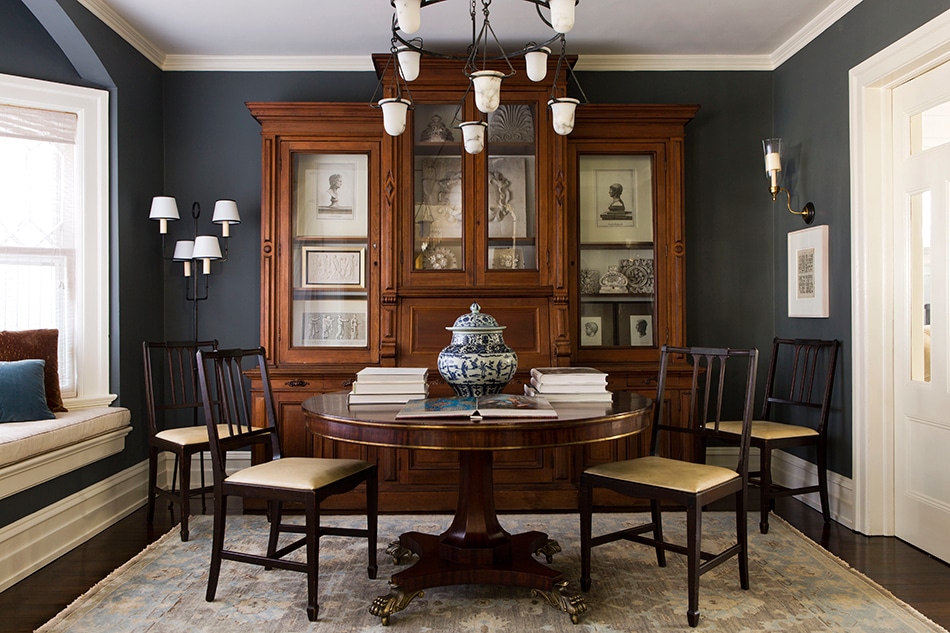 The dining room of Aiduss’s own Montclair, New Jersey, home centers on an English Regency dining table, ca. 1830, surrounded by American dining chairs, ca. 1920. Behind, a collection of 19th-century English and French plaster reliefs from Balsamo Antiques mix with classical engravings in a tall glass-fronted hutch from the 1850s. The Tommi Parzinger floor lamp is from the Palm Beach Antique & Design Center. Photo by George Ross 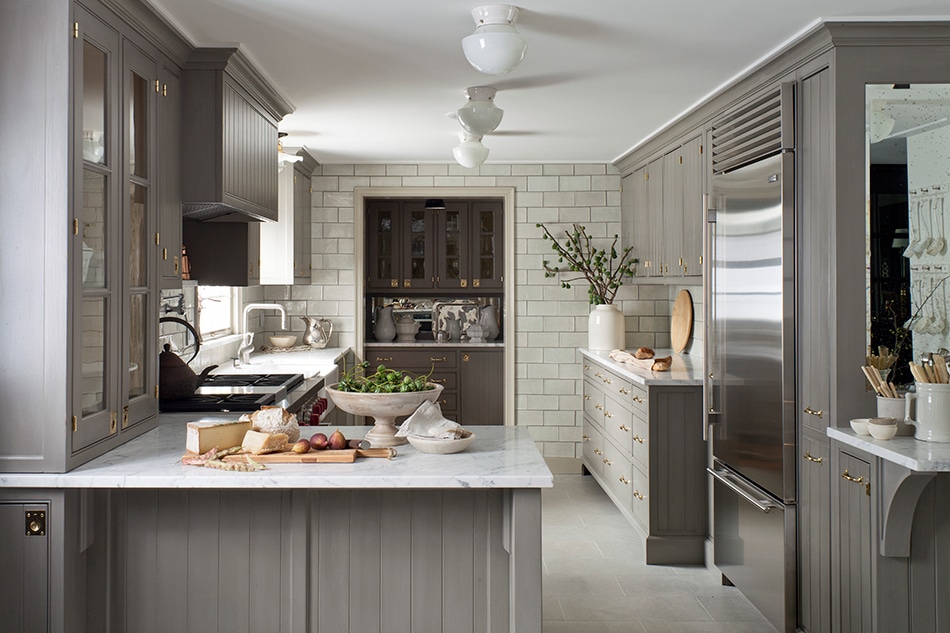 Aiduss selected a custom milk-paint finish and English-made brass hardware for the reclaimed-wood cabinets in the Essex Fells kitchen. The collection of vintage creamware comes from the Antique & Artisan Gallery. Photo by George Ross 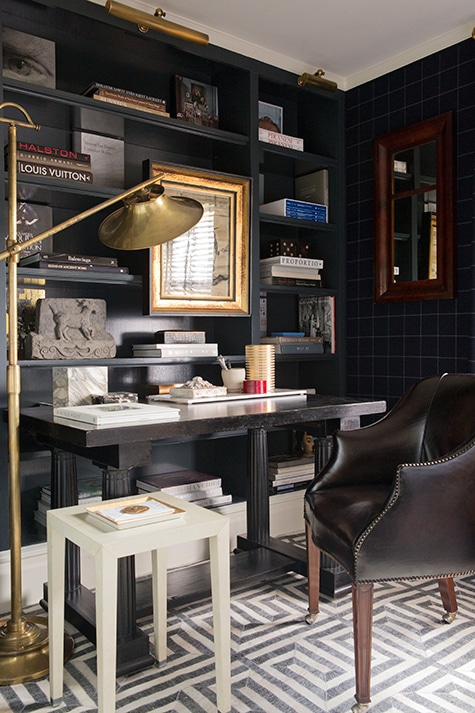 A ca. 1940 chair from London’s Carlton Club sits at the desk in the study of Aiduss’s Montclair home. The designer found the 1940s Italian bronze floor lamp during a Paris shopping trip, and he used a Holland & Sherry navy windowpane fabric to upholster the walls. Photo by George Ross

Enter Aiduss, who systematically plotted out all that needed to be done, from finishing the design of some of the rooms, to handling the remaining architectural detailing, to selecting wall surfaces, finishes and furniture. Six years later, Aiduss produced a house distinguished by its sumptuous style — hallways lined in hand-tooled leather with reversed palmette borders, draperies with embroidered pleats echoing the pattern of the ceiling’s plasterwork, exquisite bespoke pieces like a Lutyens-inspired table upholstered in a Fortuny fabric made of Egyptian cotton — and utter comfort, with every furnishing and fixture artfully configured for both practicality and pleasure. The house feels incredibly personal and lived in, which for Aiduss is the highest compliment of all.

An air of timeless luxury has become something of an Aiduss signature. When a German-born painter came to him to help her salvage a 1980s Hamptons spec house, she pleaded, “Please don’t give me an American-style house.” On the exterior, Aiduss moved columns and reframed windows to transform the building into a “classic shingle-style house” — in other words a house that spoke the local patois of the East End of Long Island. But inside, he put the accent on old-world grandeur and glamour, fitting out the rooms with such refined details as generously proportioned double doors, gridded vestibules and distinctive lintels to raise the eye, along with charming surprises of vivid color. The client, who spends most of the year living in an apartment in a Florentine palazzo adorned with magnificent frescoes, couldn’t be happier. Now, she has the kind of cosmopolitan summer retreat where she and her American-born college-age daughters can proudly entertain their super-sophisticated globe-trotting friends. 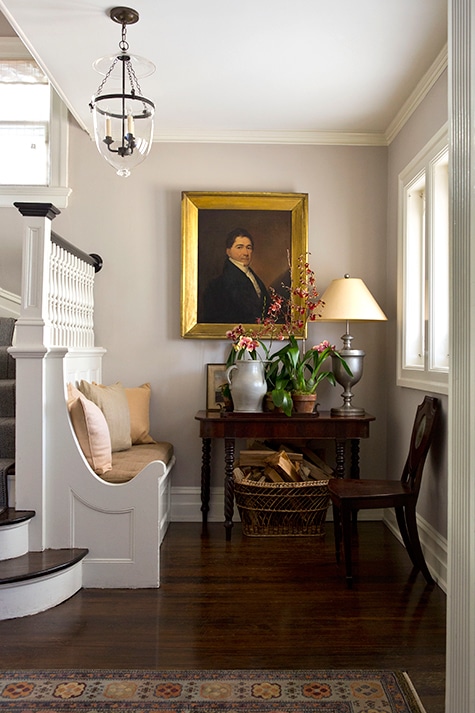 A 19th-century portrait acquired at a Park Avenue estate sale looks out from a cozy corner of the entryway in the designer’s New Jersey home. The 18th-century mahogany hall chair still sports its original painted detail, while the bench cushions are done in Holland & Sherry cashmere and linen fabrics. Photo by George Ross

The project, though, that may best showcase the breadth of Aiduss’s talent is the house he built from scratch and is currently decorating in Palm Beach. While the facade is inspired by an elegant David Adler design, Aiduss carefully conceived the interior layout to suit the needs and activities of his married clients and their two nearly grown children. “They gave me carte blanche,” says Aiduss — who had earned the clients’ trust by helping them with their Center Hall Colonial in Far Hills, New Jersey — “and that enabled me to lead them to discover something new.” The house has a distinctly formal ambience, which is why, Aiduss explains, he chose not to put the central staircase by the front door. Instead, the stairs sit at the far end of a large reception hall that comprises both entry and dining areas. The hall seamlessly connects to adjacent public rooms in the home, making it perfect for entertaining.

If the house has a stately feel, it is hardly somber. Aiduss employs colors in shades from brilliant to muted to add spirit and whimsy throughout the house, beginning with the luscious cherry-colored front door. The living room, with imperial-yellow walls, is light and airy, possessing a distinctly Venetian feel, thanks to its matching silk draperies and pelmets, opulent silver-gilt petaled side tables, gilded sconces, Fortuny cotton pillows and upholstered cocktail table. In a nod to the stained-glass windows at Miami’s fabled Vizcaya estate, Aiduss installed a stained-glass skylight in tones of amber, lilac, rose, pale blue and citrine in the kitchen and chose glass in pale yellow, blue, lilac and clear for the cabinets. But his tonal virtuosity may be most apparent in the master bedroom, where the walls and floors are faintly patterned with muted gray geometries, the bed has a tarnished silver-leaf finish and panels of pewter-colored python, and the room’s sole chair is finished in a Monet-worthy palette of lilac, patinated celadon and gold.

What’s next for this versatile designer? Beyond more homes, both near and far, look for a line of case goods next fall. Michael Aiduss appears to be poised to become a household name. 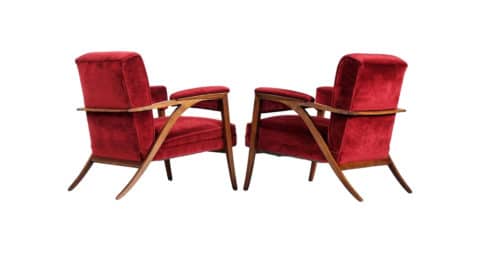 “I love how sculptural these chairs are and the color of the deep red velvet fabric that covers them.” 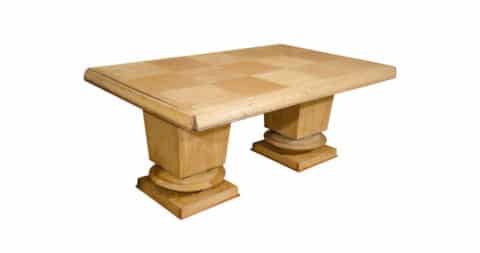 “This table is such a bold architectural piece. The patina and scale are fabulous.” 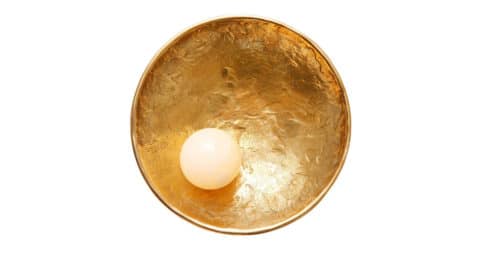 “The pairing of simple form and beautiful finishes, matched by the perfect glow — a must-have for special projects” 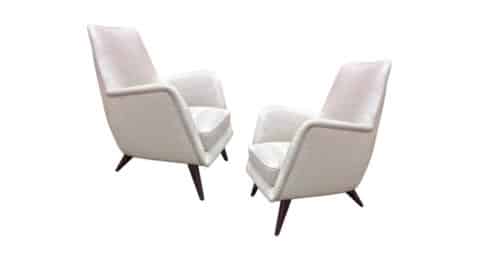 “Sensually designed in style and form, an easy pair for any room” 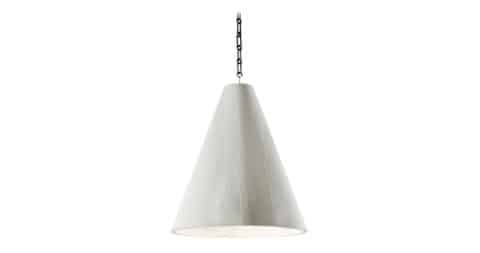 “Plaster is one of my favorite materials and is perfect in this conical-form hanging lamp.” 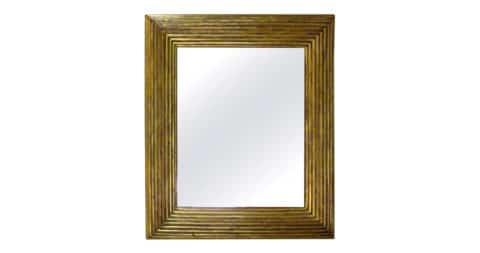 “The patina of this antique gilded mirror is really wonderful. I love using mirrors to play with light.” 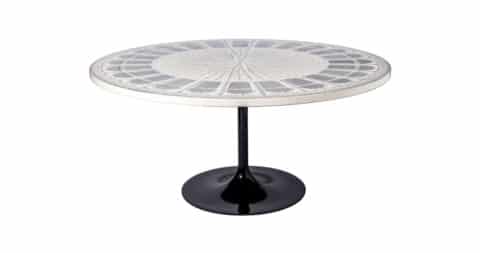 “I have always enjoyed the graphic nature of Fornasetti’s architectural drawings. This table is purely sublime.” 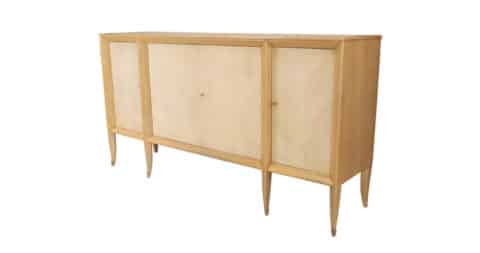 “This sideboard is beautifully crafted to capture Arbus’s true spirit.” 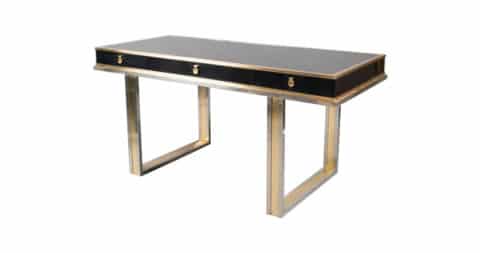 “A mix of classic materials from the 1970s — black Formica and chromed and natural brass — makes this chic desk covetable.” 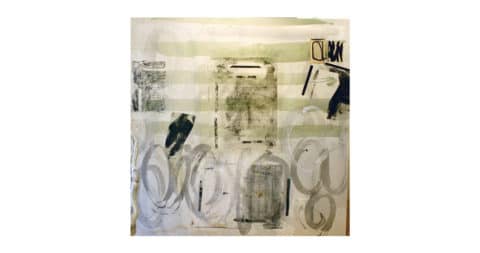 Shop Now
The Remains of a Labyrinth II, 2008, by Maria Noel, offered by Gerald Bland

“This fabulous painting is from Argentine painter Maria Noel. Her eloquent uses of materials pairs seamlessly with her graphic techniques.”