Michael Reynolds Is the “Secret Sauce” of Photo Shoots 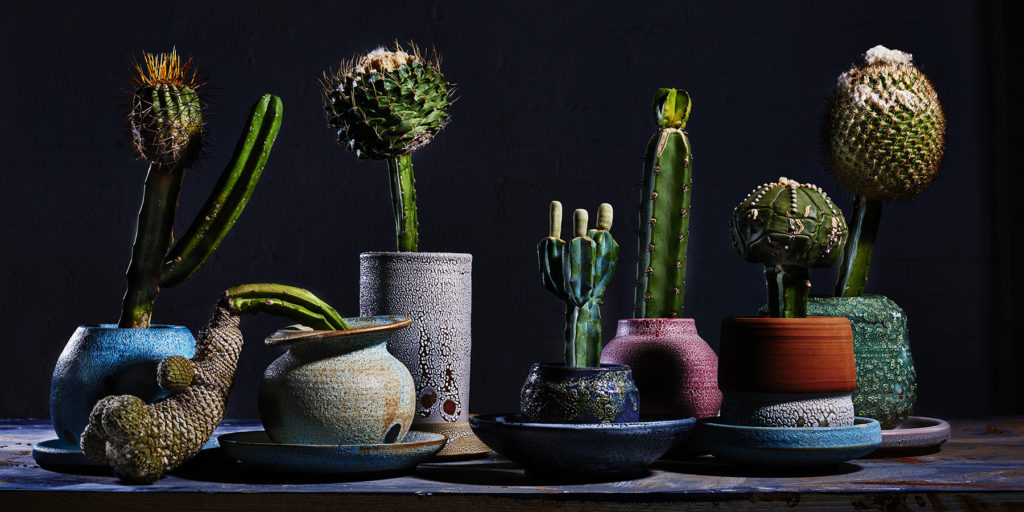 Top editors tout the producer, stylist and creative director as an oracle of style, but he’s more interested in collaboration than accolades.

August 29, 2016Michael Reynolds in his New York City apartment, surrounded by his collection of art and photography (portrait by François Dischinger). Top: Reynolds, who profiled Los Angeles–based ceramic artist Adam Silverman in Wallpaper*, says he wanted a “subversive vibe” for his shot of a collaboration between Silverman and Japanese botanist Kohei Oda that combined mismatched pottery and grafted cacti (photo by Adrian Gaut).

Michael Reynolds is a true original. At a time when every teenage YouTube phenom is described as a “visionary” or an “icon,” he is one of the few people who can legitimately make a claim to those lofty designations. Trying to put a label on his wide-ranging talents and body of work is not easy. He’s been described as a design editor, creative director, stylist, producer, artist and innovator. But regardless of the nomenclature, one thing is certain: Whatever it is he does, no one else does it quite like him.

“There are so many titles out there,” says the native New Yorker. “Someone once described what I do as a ‘visual narrative director.’ I think that’s quite a good one.” Whether he’s styling a fantastical interiors shoot, art directing a fashion campaign that merges couture and objets d’art or turning everyday kitchen utensils into reflective works of art, Reynolds always brings a feast to the table.

“I think of Michael as the Oracle of Delphi of the style world,” says Mayer Rus, West Coast editor of Architectural Digest, where Reynolds is a contributing editor and for which he has styled many memorable spreads, including, most recently, one of fashion designer Marc Jacobs’s New York City townhouse. “Michael sees beauty in places no one even thinks to look.”

A pioneer in interdisciplinary fusion, Reynolds blithely hops over the artificial borders that once separated the arenas of design, art, fashion and pop culture. He famously styled the groundbreaking first cover of Wallpaper* — which debuted 20 years ago this October and featured a pair of fetching, skin-baring models in a sumptuous all-white interior — and as U.S. editor he has been a driving creative force at the magazine ever since.

“Michael is the king of Wallpaper*,” says editor in chief Tony Chambers. “He never compromises, never plays safe, never gives less than one hundred percent. He’ll always push the people he works with to produce better and better work. He has the most exquisite taste but always challenges the boundaries of what is good or bad taste.” 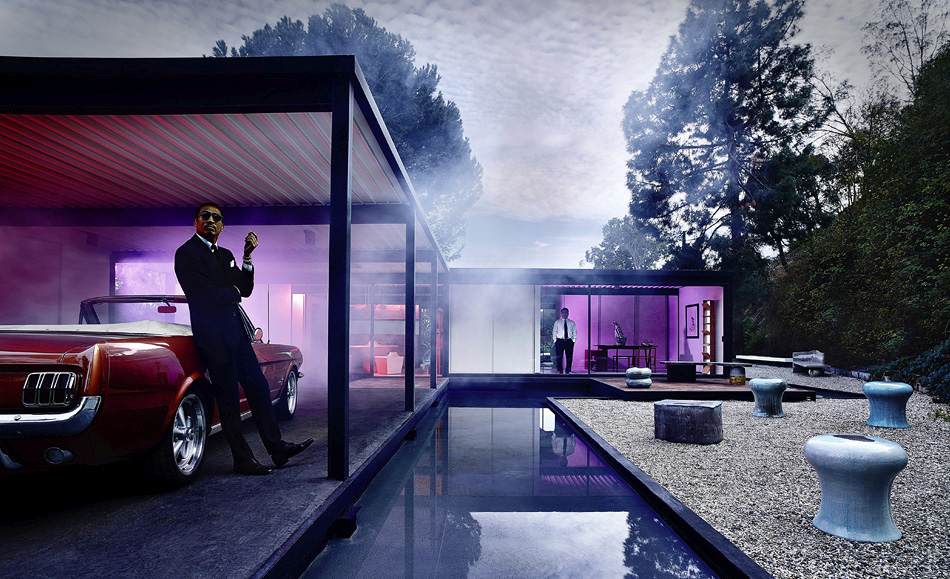 “We wanted a Men in Black–type treatment,” Reynolds says of this 2014 shoot for Wallpaper* featuring Seomi International owners P. J. Park, (foreground) and Jacob Koo at their gallery, Pierre Koenig’s Case Study House #21, in the Hollywood Hills of Los Angeles. “They’re characters,” Reynolds adds, so he wanted a “slick vibe to complement their personalities.” This entailed getting new black suits for the pair, plus a smoke machine and colored lights. Photos in this slideshow by François Dischinger, unless otherwise noted 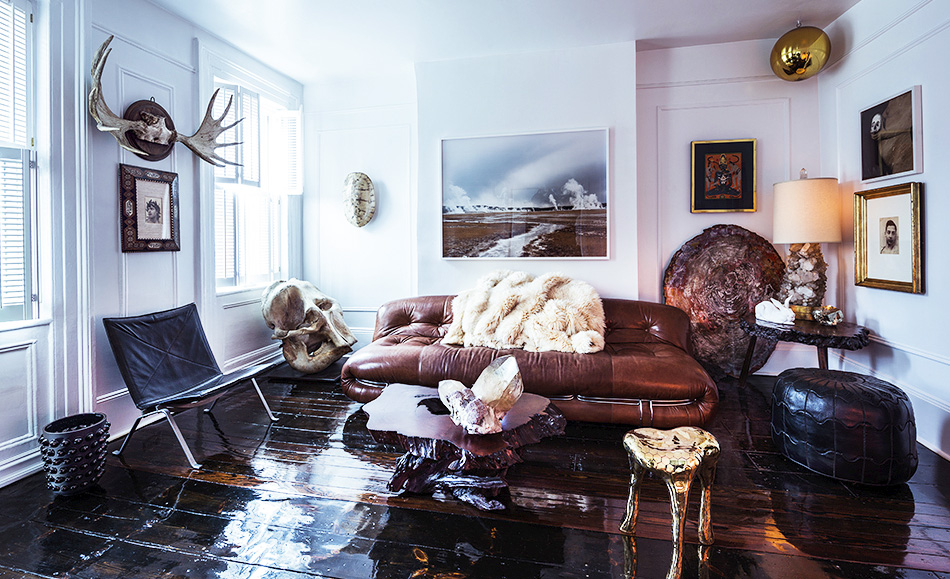 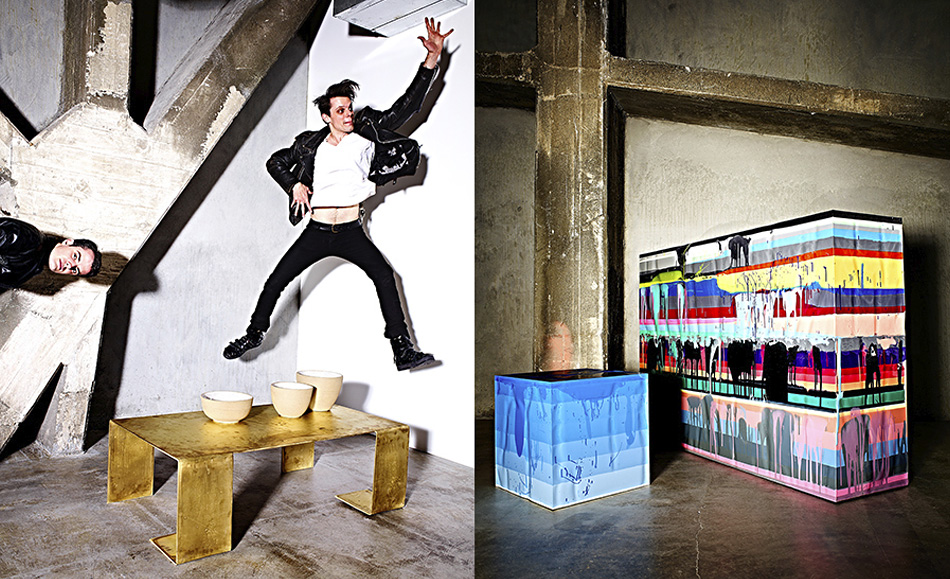 Artists Niki and Simon Haas, better known as the Haas Brothers, posed with some of their earliest prototypes in a 2012 issue of Wallpaper*, back when they were relatively unknown. 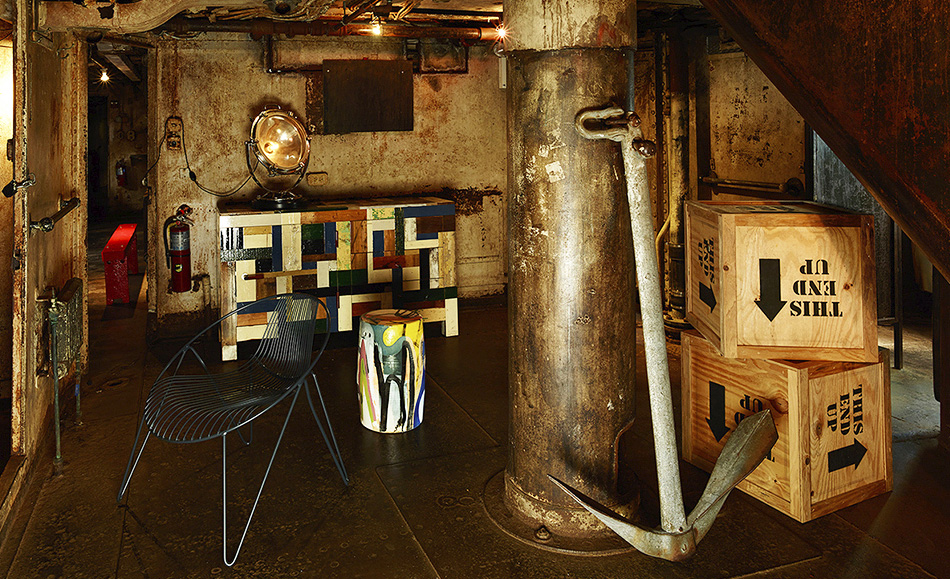 Reynolds staged an interiors shoot on the Frying Pan, a 1929 lightship docked at Pier 66 in the Hudson River, for Wallpaper* in 2013. Photo by Anthony Cotsifas 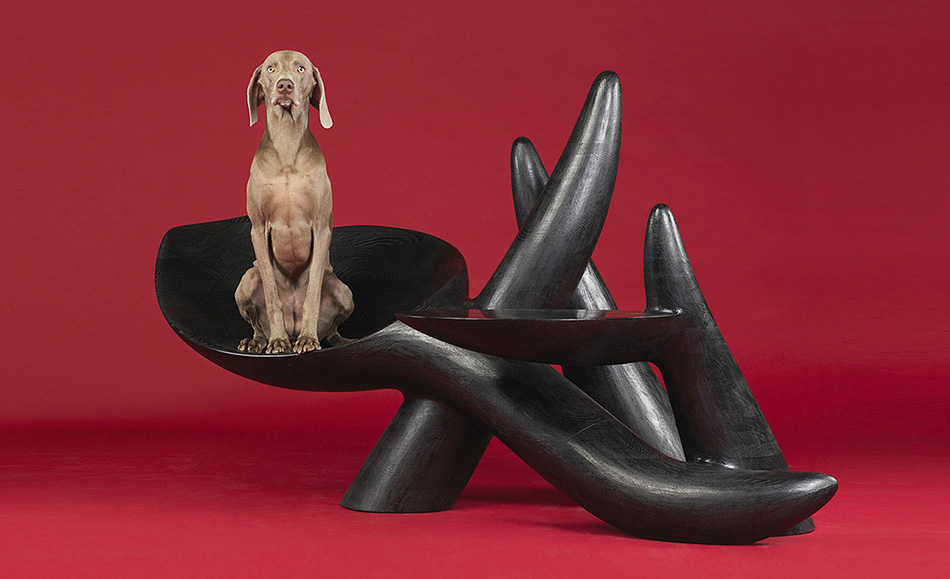 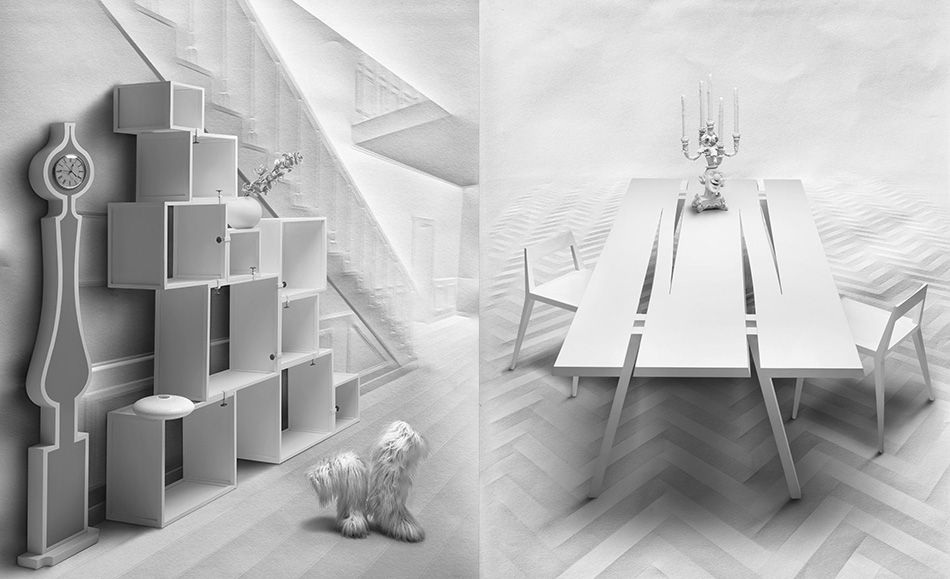 “I was so inspired by his work,” Reynolds says of his collaboration with German paper artist Simon Schubert for a 2010 interiors story in Wallpaper*. Reynolds and photographer Anthony Cotsifas shot objects from the same perspective as Schubert’s works, then dropped them into his pieces. “It turned into this absolutely surreal optical illusion.” Photo by Anthony Cotsifas 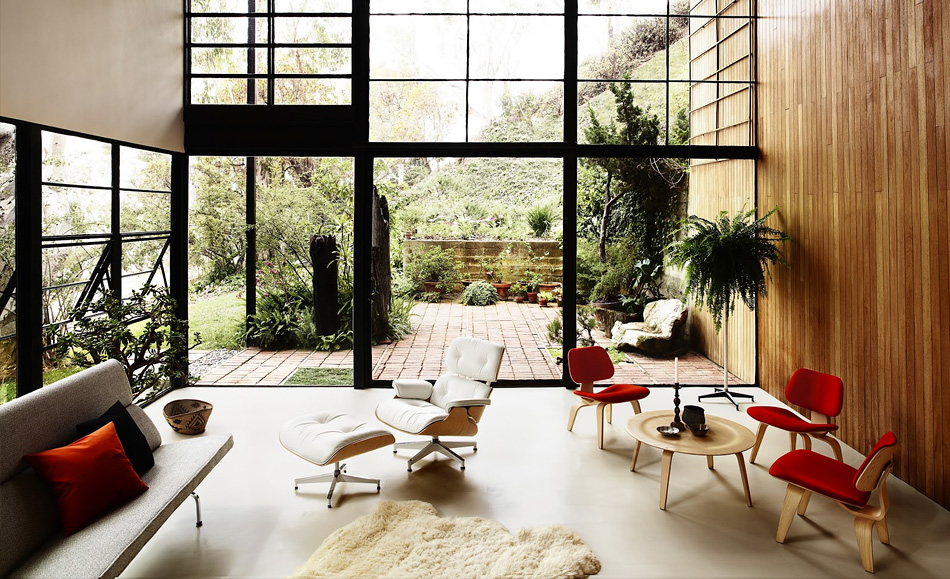 Reynolds shot the California home of Charles and Ray Eames — also called Case Study House No. 8 — for a Herman Miller campaign in 2012. 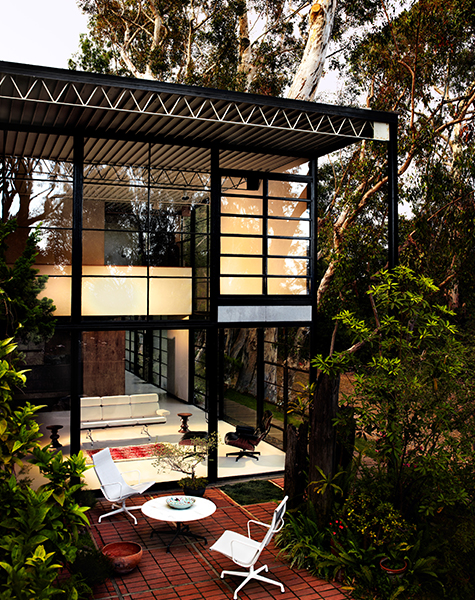 Collaborating closely on his myriad projects with contemporary artists, photographers, designers and craftspeople, Reynolds cross-pollinates ideas and inspiration from one demimonde to another. Projects include profiles and collaborations with such artists as Paul McCarthy, William Wegman, Marina Abramović, Jack Pierson and Bjarne Melgaard. “It always begins with the conceptual phase,” Reynolds says of his process. “Then pulling together the team, establishing a feel, the lighting, look, composition.”

One of the most sought-after creative forces of his generation, Reynolds is also a contributing editor at Cultured and a frequent contributor to T, the New York Times style magazine, as well as an array of high-profile international publications. In the world of advertising, he has made compelling images for such formidable clients as Calvin Klein Home and Herman Miller, often creating sets in architecturally historic locations, like the Eames House in Los Angeles and Ludwig Mies van der Rohe buildings in Chicago.

He has designed exhibitions for such museums as the Albright-Knox Art Gallery, in Buffalo, and curated shows at major design galleries, including Maison Gerard and R & Company, in New York. And he recently conceived, art directed and edited his first book, Tom House (Rizzoli), a meditation on the idiosyncratic Los Angeles home of the late legendary homoerotic artist Tom of Finland.

“Michael has impeccable taste, as well as an encyclopedic knowledge of design and art,” says Sarah Harrelson, founder and editor in chief of Cultured. “He also has a particular kind of genius for knowing when to insert himself and when to hold back.” Describing a recent cover shoot in the Brooklyn studio of artist Rashid Johnson, Harrelson explains that Reynolds set the perfect stage “and then had the confidence to let the subject shine.”

Reynolds’s eye for discovering talent is legendary — as is his generosity in making introductions. Indeed, his skill for matchmaking has changed the trajectory of many budding careers. ”Michael is one of the most supportive and tenacious individuals I have ever met,” says Niki Haas, one half of the Haas Brothers design duo. “Without his vision, I’m not certain the Haas Brothers Studio would even exist. I love the guy, and I owe him the world.”

Reynolds’s provocative sensibility can be traced to his childhood. “Ethnically, my makeup is entirely East Village — Sicilian, Ukrainian and Irish,” says the Manhattan-born tastemaker. “My grandparents were put together by a matchmaker in Sicily who misled my grandmother into thinking my grandfather had money.” That not being the case, they immigrated to America in search of some. 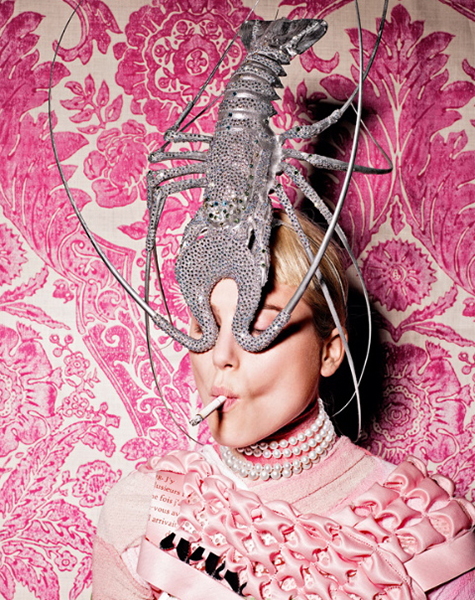 Reynolds’s grandmother was a seamstress who worked for Bergdorf Goodman and Henri Bendel. With her savings, she bought a building in the East Village. Today, Reynolds and his partner of 17 years, Eric Hoffman, founder of the New York–based branding agency Hoffman Creative, reside in the apartment where his grandparents once lived.

“My earliest memories are of sitting next to my grandmother at her sewing machine in the living room or cooking in the kitchen,” Reynolds recalls. “We always knew when we were having pasta for dinner because she would hang it on the back of the dining room chairs to dry.”

Reynolds’s parents lived in the East Village when they were first married but moved to Scarsdale to raise their five children. His father, a lawyer and an intellectual, was the executive officer of New York State’s Appellate Division of the Supreme Court. An article in the Village Voice in the late 1960s featured his pro bono work helping runaways reconnect with their families. “They called him the ‘hippie lawyer,’ ” Reynolds says.

As a kid growing up in the suburbs, Reynolds remembers rolling up his sleeves and moving furniture with his mother. “Whenever we needed a change, we’d move everything around,” he says. “It was fun and creative, and to this day we always joke about my career. Little did we know back then!” In high school, Reynolds took advantage of his proximity to New York City. “I was hanging out at CBGB, art galleries, Keith Haring openings, Andy Warhol parties, Danceteria,” he says. “I had a taste of that whole world.” 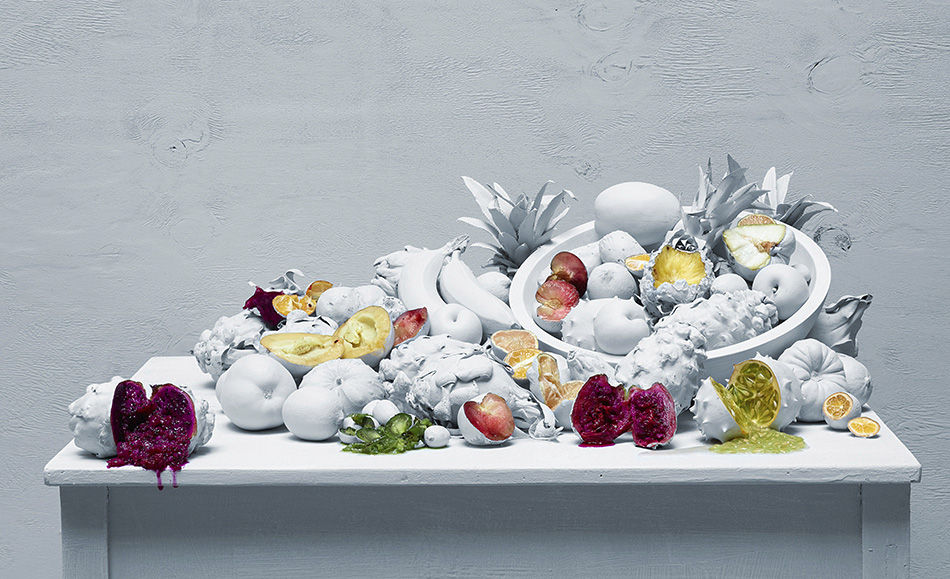 “If you were to send George Segal a fruit basket, this is what is would look like,” Reynolds says of this shoot he styled for a recent issue of T magazine. Titled “Strange Fruits,” the story is about hybrid produce, and Reynolds calls this image of white-painted fruits and their vibrant innards “a celebration of the guts.” Photo by Anthony Cotsifas 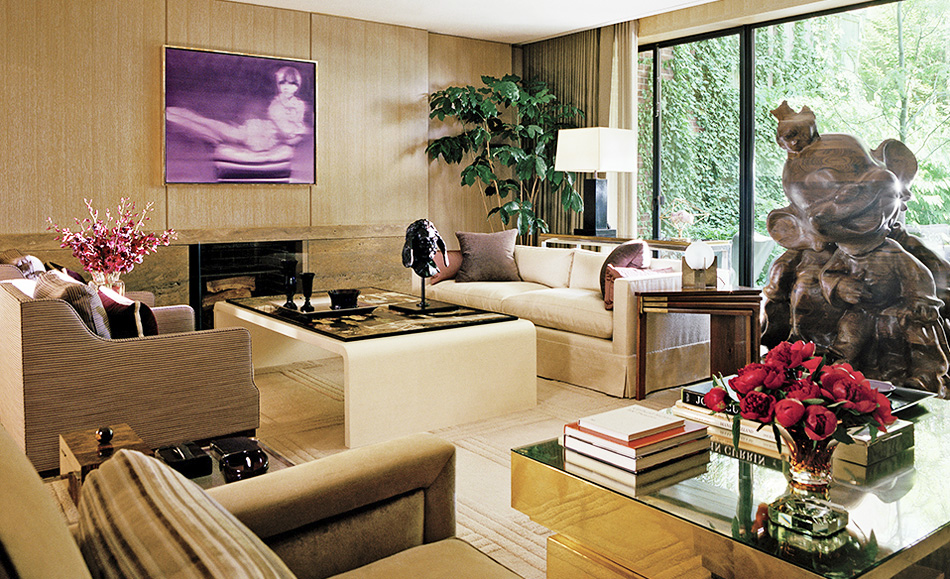 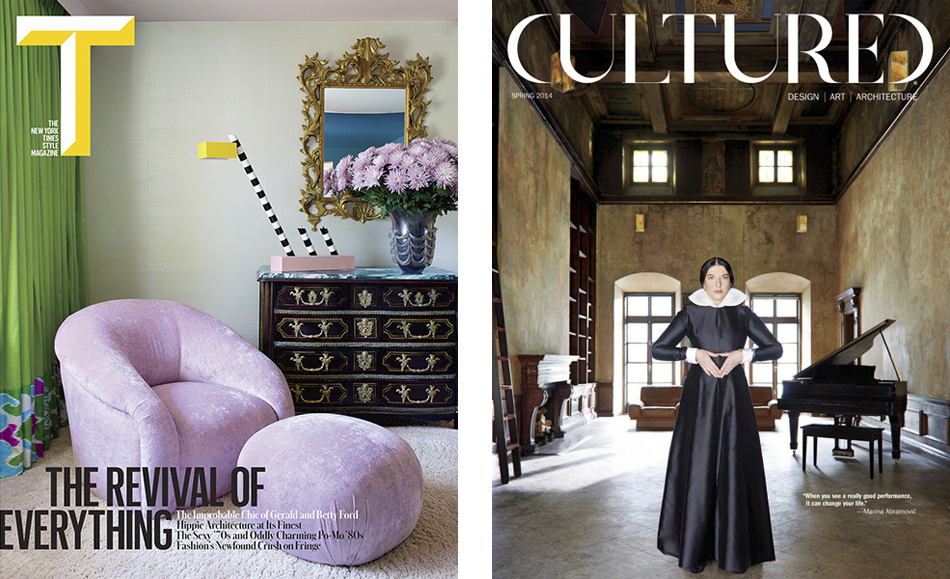 Left: The former home of Gerald and Betty Ford in Rancho Mirage, California, was depicted in a 2015 T magazine cover story (photo by by Anthony Cotsifas). Right: Artist Marina Abramović was photographed in a 19th-century Italianate mansion in Manhattan for a 2014 issue of Cultured magazine (photo by Jason Schmidt). 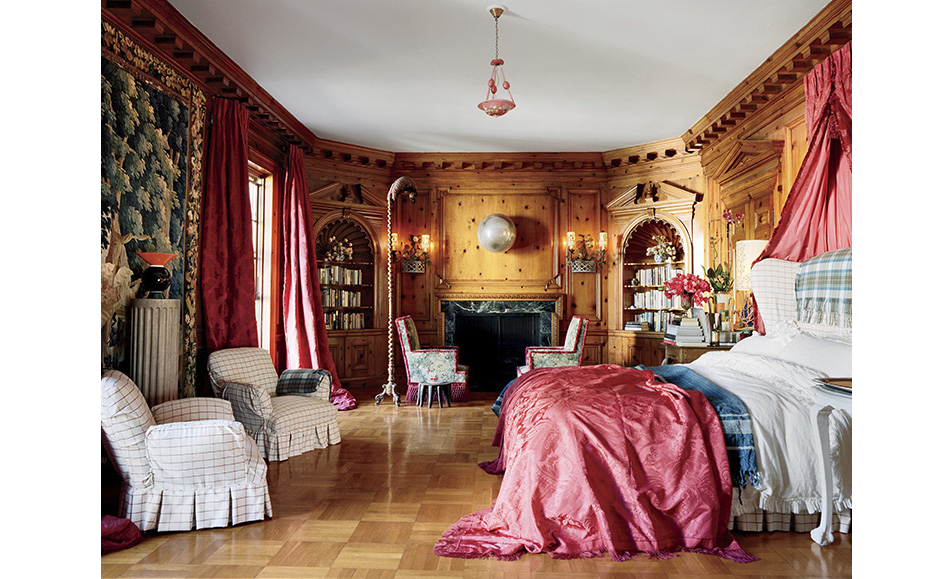 The West Hollywood home of fashion photographer Matthias Vriens-McGrath and his husband, yoga instructor Donovan Vriens-McGrath, appeared in a 2016 issue of Architectural Digest. Photo by by François Halard 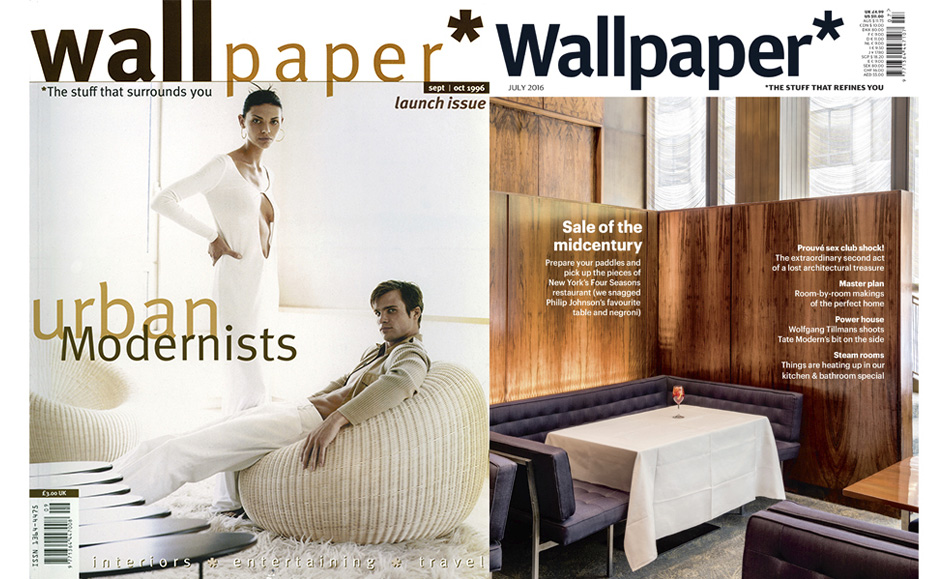 Left: The cover of Wallpaper* magazine’s October 1996 launch issue. Photo by Stewart Shining. Right: The publication’s July 2016 cover documented the end of an era marked by the closure of the legendary Philip Johnson—designed Four Seasons Restaurant in Manhattan. Photo by François Dischinger 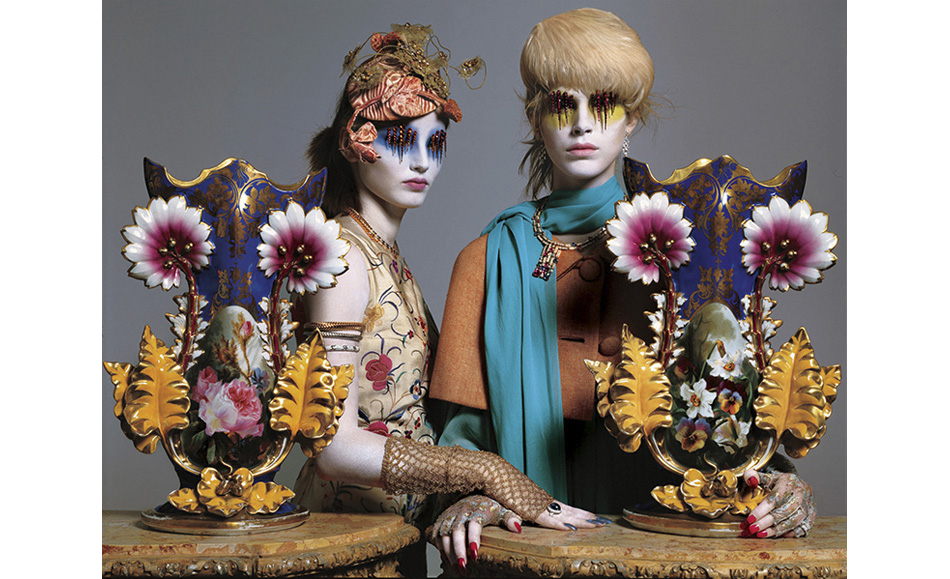 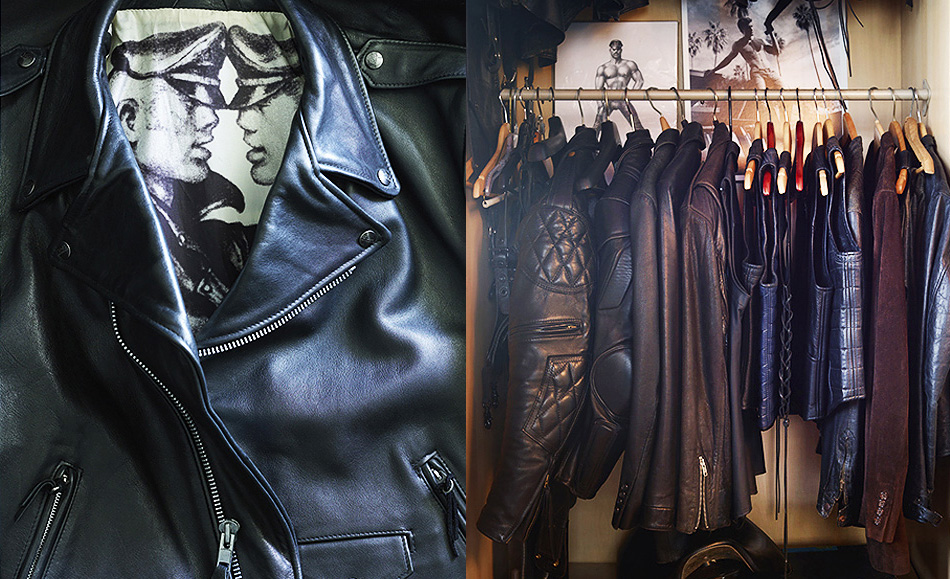 Reynolds’s book, Tom House: Tom of Finland in Los Angeles (Rizzoli), is a photographic tour of the former home of deceased Finnish artist Tom of Finland (whose real name was Touko Valio Laaksonen) in the Echo Park neighborhood of Los Angeles. On the left is the front cover image, and on the right is the back cover image. Photo by Martyn Thompson 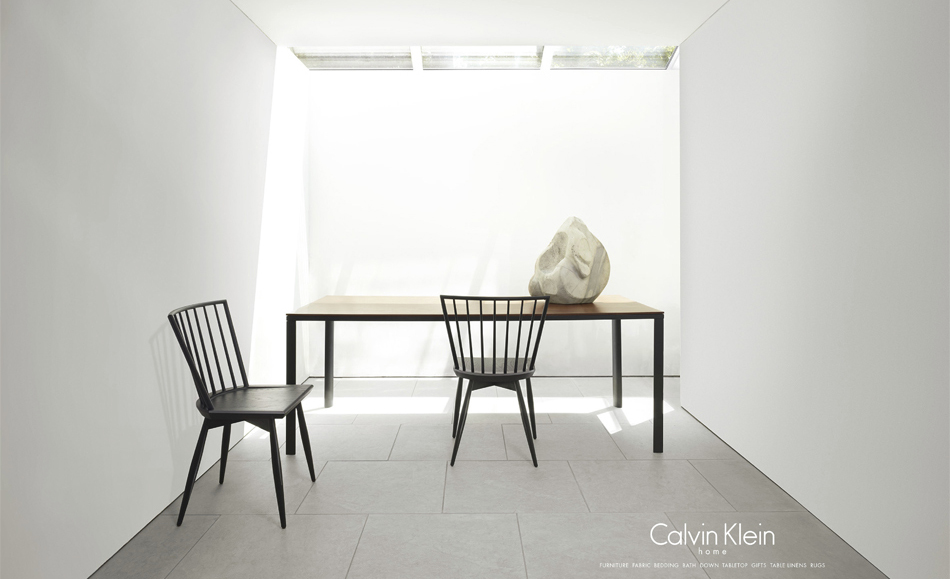 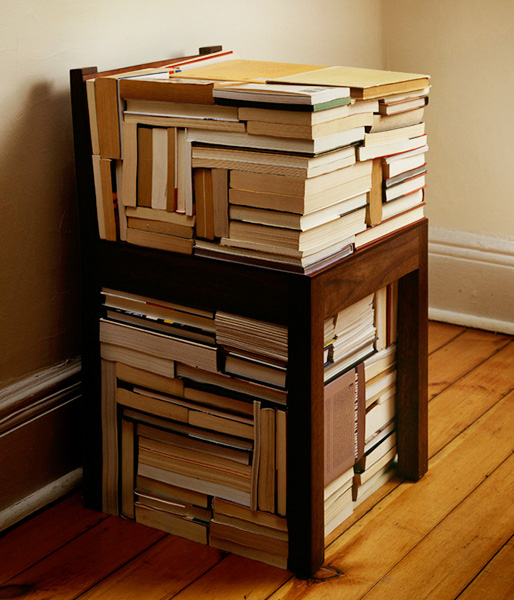 He studied anthropology and art history at New York University, remaining close to the action. After graduation, he says, he wasn’t sure what he wanted to do, but he loved photography. He heard that Condé Nast was interviewing and landed a job as assistant to Vogue’s art director at the time, Raul Martinez. After a few years, Reynolds became an associate style editor, producing design and style pages with Hamish Bowles.

“Michael and I met back in the day at Vogue, when we were both kids,” says Amy Astley, editor in chief of Architectural Digest, who was an associate beauty editor at the time. “He was a total joy to work with — funny, fun and passionate about style.” Today, Reynolds “is able to bring visual clarity to anything from a house to a collection of objects,” Astley adds. “He is the secret sauce in many a successful shoot.”

After nearly seven years at Vogue, Reynolds embarked on a freelance career. The rest, as they say, is history. “In the work that I do, everything is about composition and placement,” Reynolds explains, referring to what is now nearly 30 years of experience. “It’s very intuitive. I know how to move energy by moving objects.”

“Michael brings a very rare and advanced combination of personal aesthetics, sophistication, deep knowledge and affection to his work,” says ceramist Adam Silverman, whom Reynolds has profiled and whose work he has celebrated in the pages of Wallpaper*, Architectural Digest and T. “He makes whatever he is featuring look better than it ever has.”

Reynolds claims that what he likes most about his work is collaborating with other talents. “I don’t take full credit for anything,” he explains. “At the end of the day, I believe the ‘ours’ conversation always trumps the ‘me’ conversation. If everybody can get on the same page, leave their egos behind and bring all their gifts to the table, you have a gourmet meal. And it’s amazing.”