Miles Redd, a Man about Style 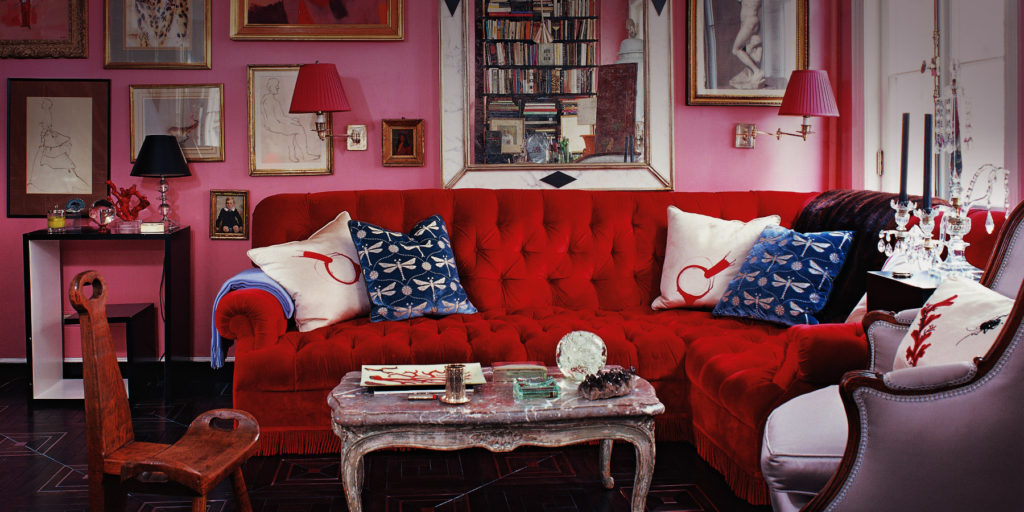 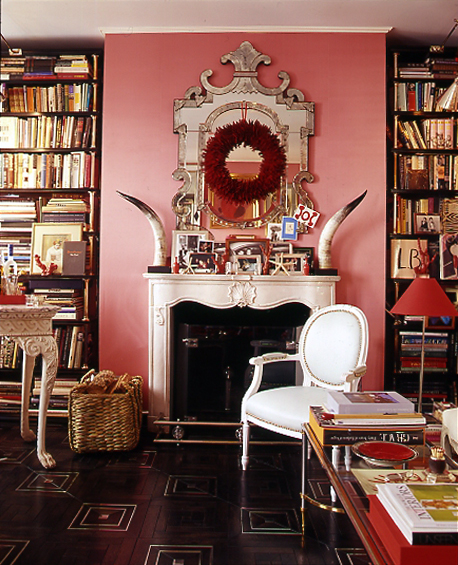 July 8, 2009Interior designer Miles Redd‘s eclectic style is on full display in his Manhattan home, where he has paired a plush red sofa with a pink wall covered in figurative art. Above: In true maximalist form, Redd hangs holiday cards and a crimson wreath on an ornate Venetian mirror above the fireplace. Photos by Tim Street-Porter

I would say I probably am a worrier. I care a lot,” confesses the dashing and stylish decorator Miles Redd. “Lots of lists. Endless lists,” he adds. With the attention to detail obvious in his projects — notice the padded and studded zebra skin doors in his apartment and the parquet floors with metal inlay — it is easy to see that Redd is passionate about his work. “Embellishment and layers are part of my design personality,” says Redd, a decorator who considers animal print a neutral. “I do look at minimalist interiors with one big ‘design stroke,’ but my style is really about layering using different elements.”

Redd studied art at New York City’s Parsons School of Design, and says that if he hadn’t become a decorator, he would have been an art dealer. Today, in his interiors, he uses art to change the emphasis of a room, hanging contemporary paintings to add punch to traditional decoration, and introducing traditional art into contemporary interiors for an extra layer of richness. At auction recently (a favorite place of his for discoveries), he bought both a Neapolitan painting of Vesuvius and an architectural etching of a temple, both of which would look great in a modern space.

Following his time at Parsons, Redd studied film at New York University, but when he graduated in 1991, he resisted the temptation to move to California and become part of the film industry. In love with late-1950s and early-1960s glamour, Redd had always wanted to work in design, and so instead of heading West, he went to work for antiquarian John Rosselli instead. Next, he worked for five years for Roselli’s wife, decorator Bunny Williams. “She taught me everything I know!” exclaims Redd. “The best ways to do floor plans — really super practical decoration — and how to run a business and a budget.” 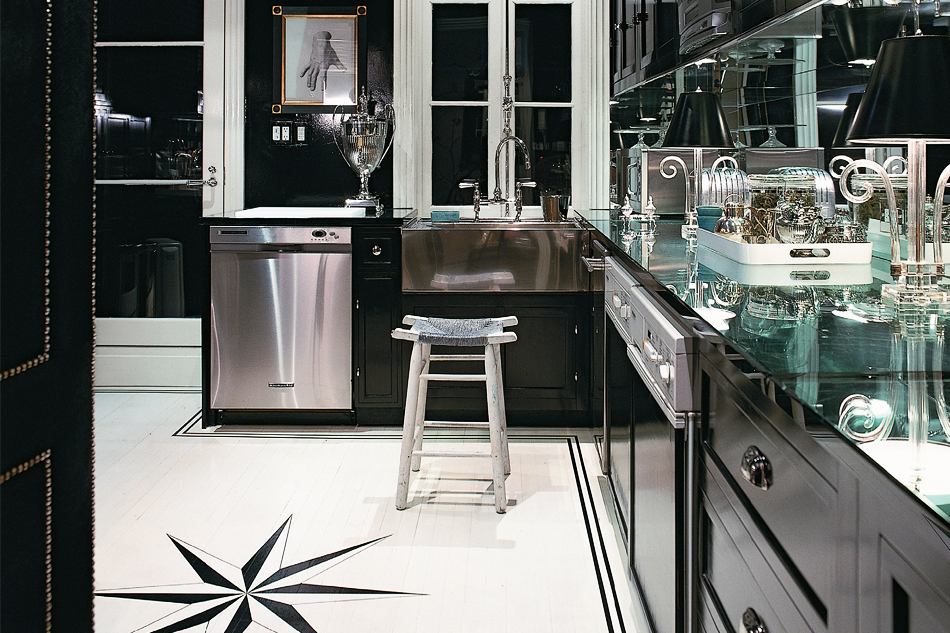 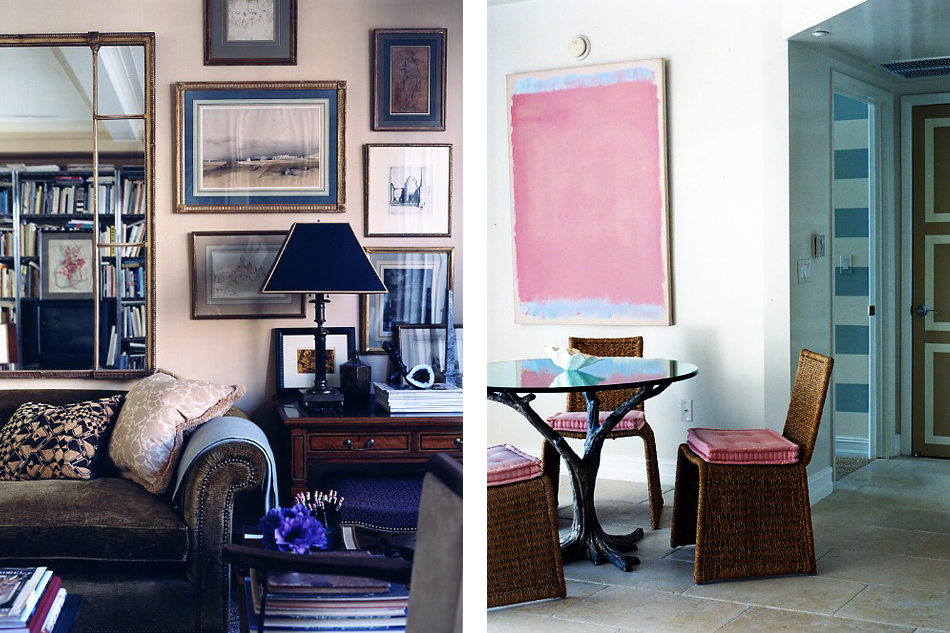 Left: Redd’s work in the former home of the classical architect Gil Schafer. Right: a dining nook in an apartment in Miami. 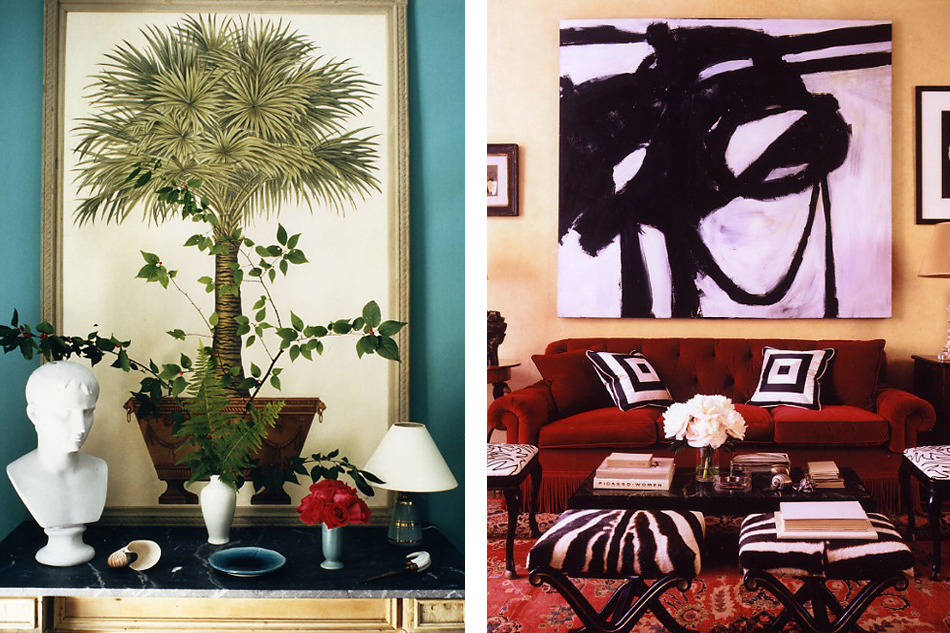 Left: a vignette from the North Carolina highlands home of Redd’s parents. Right: the living room of a New York townhouse (photo by Simon Upton)

Even his tiny East Village apartment became a workshop for his ideas: Redd painted the floor in bright green triangles, piled his favorite design books to the ceiling and filled the walls with various prints and drawings, including his own figure drawings. 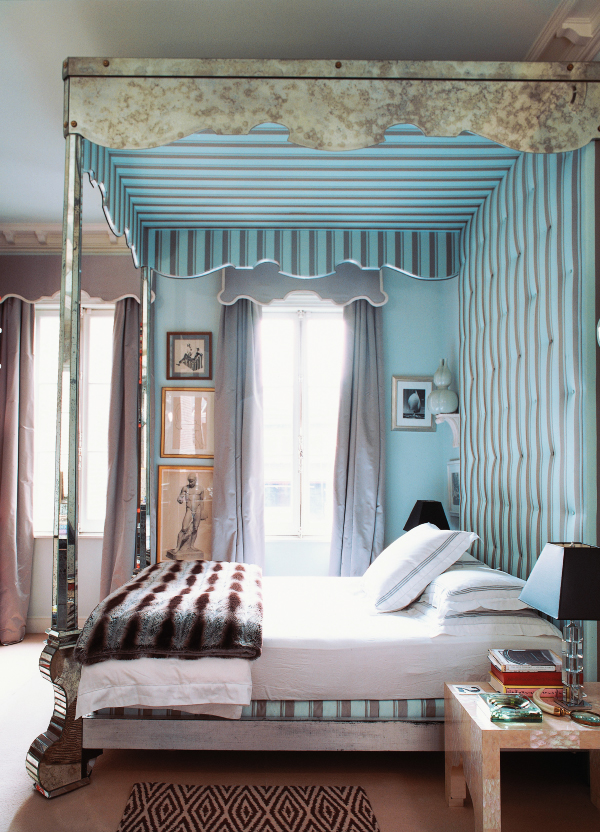 Redd’s bedroom plays on the exotic and eccentric traits that characterized Regency style. His choice of this oversized, mirrored four-poster bed takes advantage of the ceiling height in a top-floor room of his townhouse.

”I’m still interested in set design. I mean, who wouldn’t be?” he says, and today, the pretty front facade of the New York townhouse, which Redd shares with his sister, could double as a Cecil Beaton set for “My Fair Lady,” with its striped blinds and neat Regency-esque front door. Inside, the illusion does not fade: Ascending the stairs to the top two floors where Redd has taken up residence, mirrored walls and pale blue silk curtains continue the theatrical flourish. He is noted for his sure hand with color, and here he has chosen pale blue to balance the reds of this room. Blue dragonfly-bedecked cushions are plumped up against the red sofa, and pale-blue leather covers the seats of a pair of occasional chairs designed to float around in the room. A well-stocked drinks table in the corner lends a genial feeling of hospitality — a place where friends might meet before a night out on the town. “I spend tons of time here. I’m a real homebody. I love to entertain,” says Redd. 

One of the largest rooms in his house is the master bath. It was installed intact as a period mirrored bathroom designed by decorator David Adler and discovered by Redd in Chicago. It is a stunningly beautiful space; the entire wall surface and moldings, except for the bath alcove, are mirrored. Even the built-in dressing table is covered with mirror, and Redd has added a mirror-like Venetian blind with Grecian-style tapes to match the room’s period charm. And as his apartment is small, this room is even used occasionally for dinner parties. “I’ll have Christmas Eve dinner and special occasions in there. When I bought it and had it successfully installed, I knew I was lucky that it all fit!”

Redd’s main focus is New York, but he is also working on such diverse projects as a family home in Houston, Texas; a 1920s colonial in Greenwich, Connecticut; and a Delano & Aldrich house in Locust Valley, New York. In 2003, Redd was named creative director of Oscar de la Renta Home. His celebrated work has been prolifically featured in such shelter publications as House Beautiful, Elle Decor, House & Garden and Domino, but fashion arbiters including Vogue and W have taken note of his discerning, too.

As well they should. Redd is quick to point out that fashion, and not just film, is a big influence on his work, pointing to couture photographers like Richard Avedon, Irving Penn, and illustrator Rene Gruau as inspirations. When it is pointed out that these aren’t designers, he cries, “I want to create rooms for people who are in those books!”