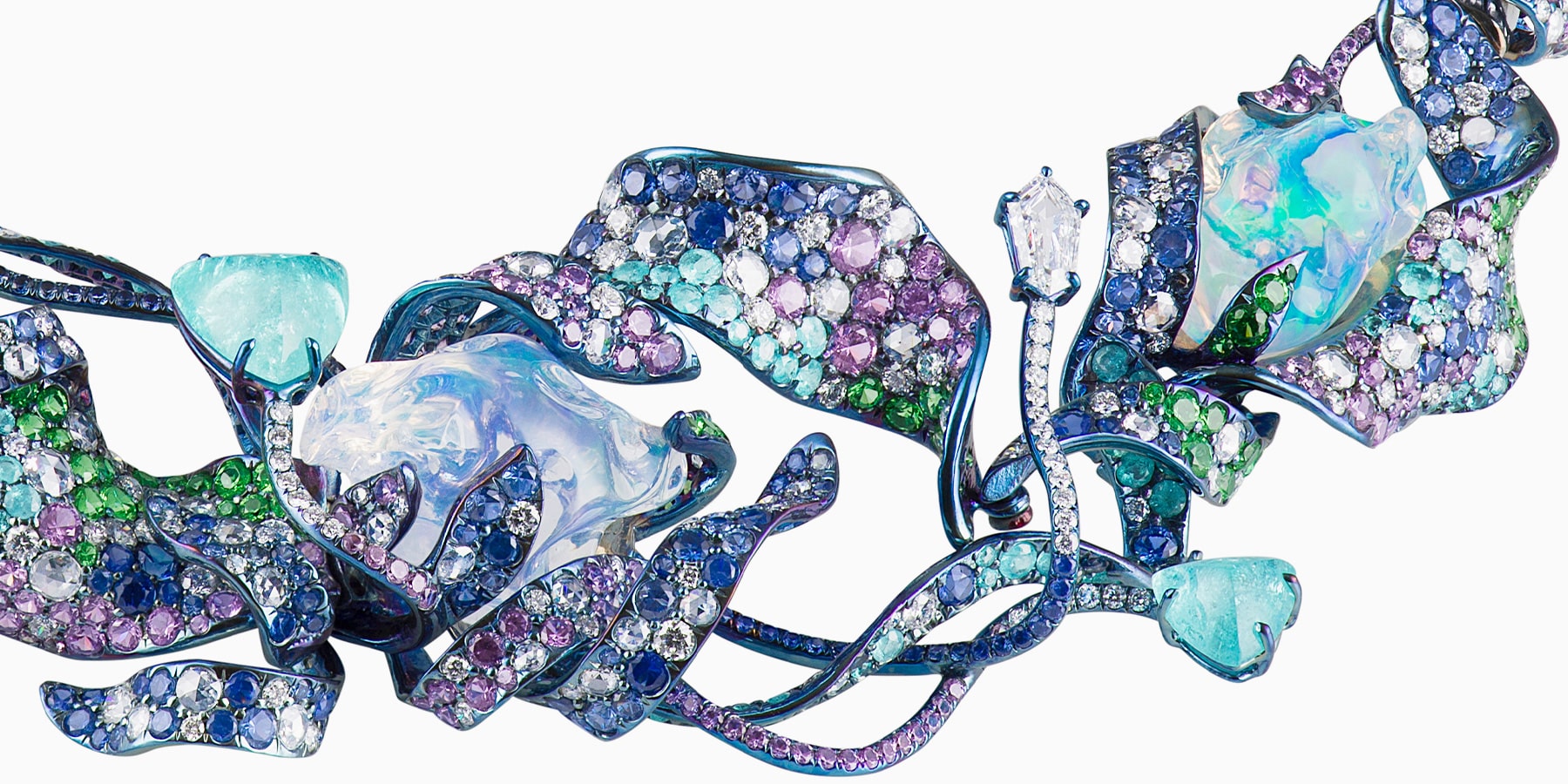 Neha Dani’s Jewelry Strikes a Balance between Tradition and Irreverence

The designer takes inspiration from the natural world (like glaciers and sea life) to create one-of-a-kind pieces made the old-fashioned way. 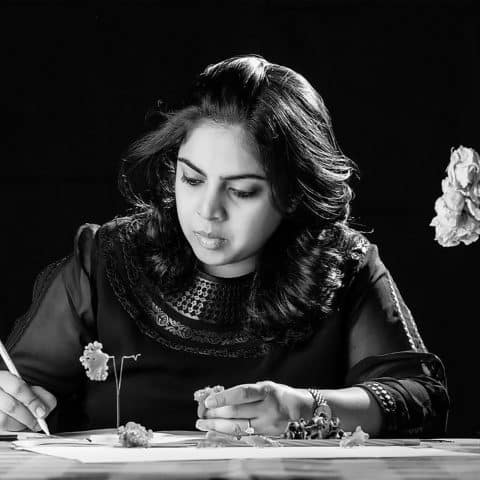 India has a long, rich history of jewels. It is home to the world’s first diamond mines, in the storied Golconda region, and originated exquisite enameling techniques as well as the opulent Mughal style that has been riffed on by everyone from Cartier to JAR. It’s a nation with a distinct, instantly recognizable jewelry lexicon — one that could provide any jeweler with a career’s worth of inspiration. But Delhi-based designer Neha Dani isn’t one for convention. From her methods to her materials, Dani’s work is entirely, uniquely her own. Since launching her collection of one-of-a-kind creations in 2014, she’s developed a singular style — titanium and gold washed in psychedelic hues; intricate, undulating lines — that isn’t so much Indian as it is out of this world. 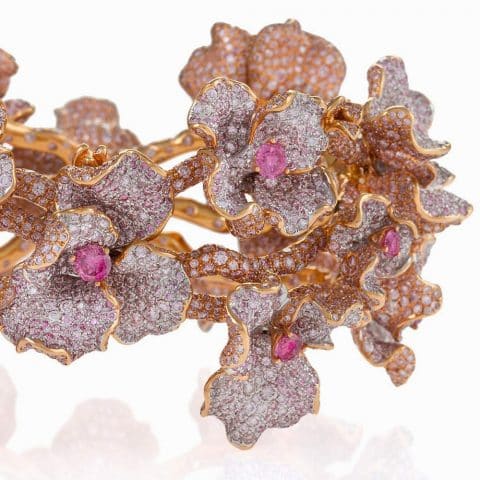 The juxtaposition of tradition and irreverence is central to her designs, and has been a defining feature of her life. One of her strongest childhood memories is of her father, a transportation and logistics professional, commissioning a striking modernist building to serve as a community center in her small hometown of Coimbatore, in southern India. The sleek structure, resembling a pristine white flying saucer, presented a stark contrast to the surrounding village. “It got me to start thinking out of the box,” she recalls. “He was there to do something different. I feel that I, too, need to do something different.”

Her creative impulses led her to California, where she trained as a gemologist, designer and wax carver at the Gemological Institute of America. Eager to delve even deeper into the science of gems, she earned a diploma from the Gemmological Association of Great Britain, winning election to the esteemed Fellowship of the Gemmological Association. Dani’s expertise attracted the attention of the International Gemological Institute, which tapped her to launch its first location in India, establishing the organization’s gemstone certification and grading labs in Mumbai. She parlayed that experience into running jewelry workshops and sourcing stones for private clients, which eventually led to designing pieces of her own. 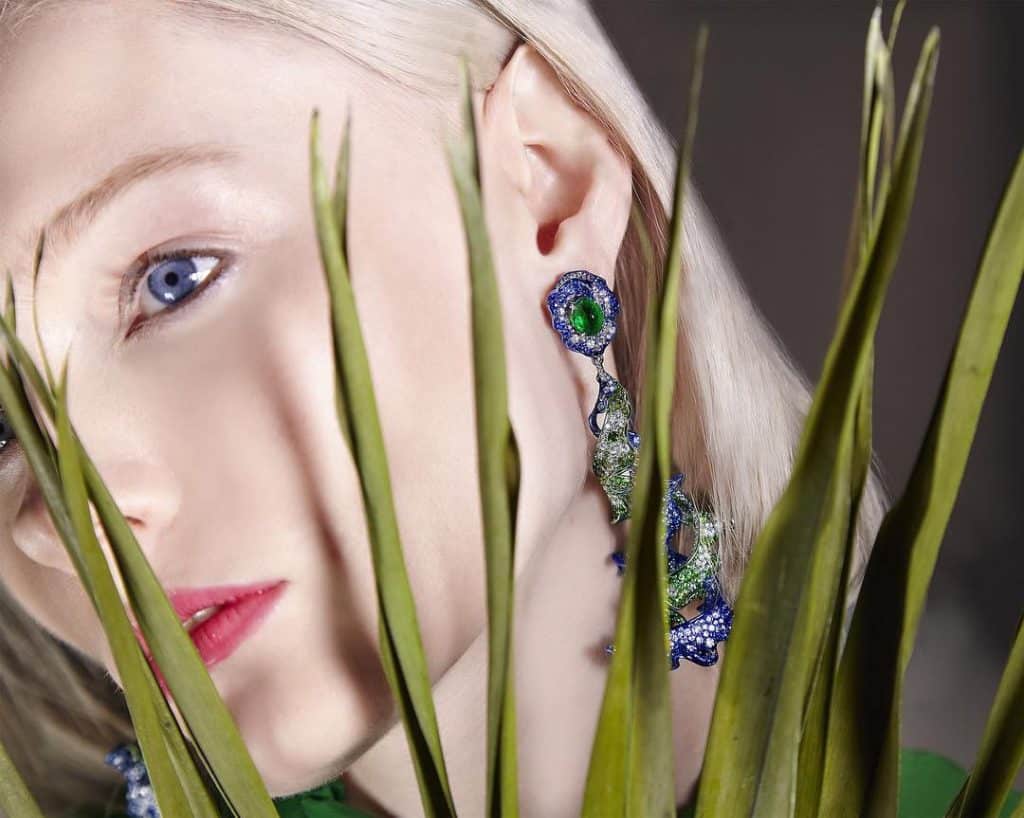 Inspired by the world under the sea, Dani’s Bi Color Parisa earrings each comprise a small blue floret with a cabochon tsavorite center from which hang two intertwined gold strands, one plated in green and the other in blue rhodium. The two are encrusted with 583 round and 40 rose-cut diamonds and accented with 534 sapphires and 425 tsavorites.

But her journey wasn’t as easy or as seamless as this makes it sound. Progressive as her parents were, they still expected a woman of Dani’s social standing to settle into life as a wife and mother. “I really had to fight my family to work,” she says. “It wasn’t even about being a designer, just ‘Why do you want to work?’ ” Defying societal norms in her career while also getting married and starting a family, she proved that the two weren’t mutually exclusive. Her hard-won independence drives her to continually think bigger and bolder. 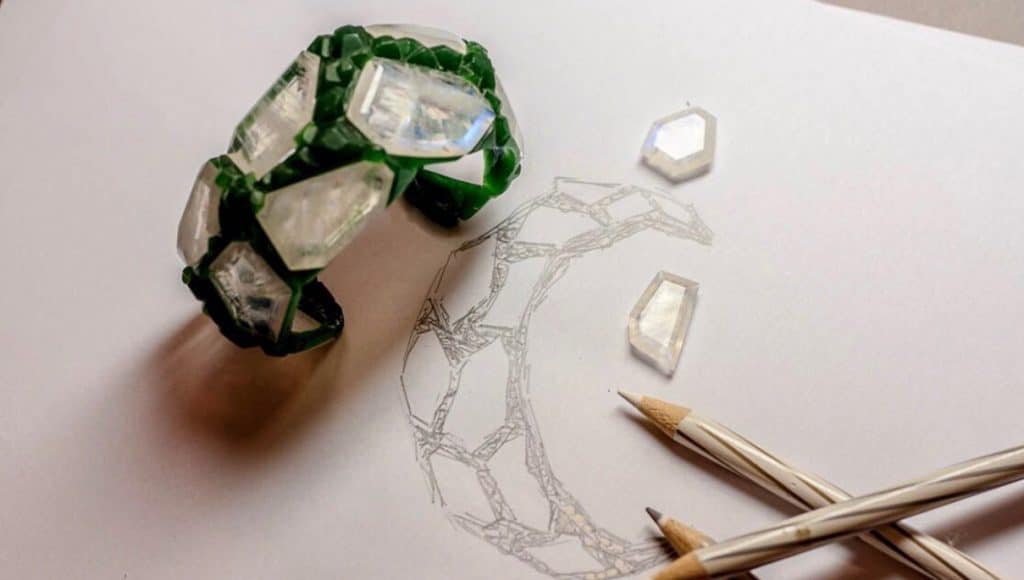 “Because I fought so hard to be doing this, I’ve always felt I needed to contribute something,” she says. “As an artist, as a designer, you’re constantly crossing your own internal hurdles to express yourself. It’s about believing in what you do and believing in your concept. You have to fight your own nerves and just put it out there — and then try to make something even more beautiful.” 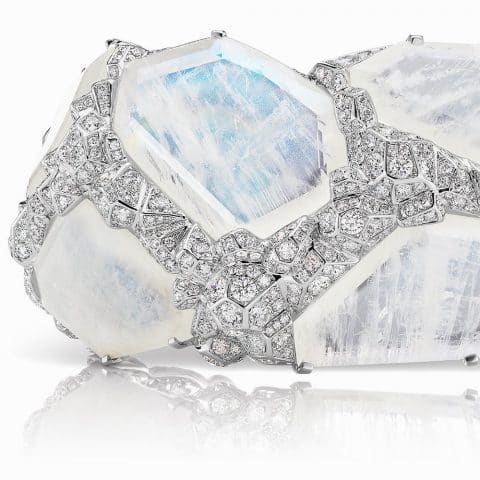 The completed Aialik cuff, rendered in white gold, contains more than 10 carats of round-cut diamonds and 163 carats of moonstones.

Dani’s nonconformist streak extends to every aspect of her work. “Wearable art” may be a cliché within the jewelry world, but Dani’s approach is truly much closer to an artist’s than a traditional jeweler’s. She begins with a rough, hand-drawn sketch to give an idea of form and her concept, and then each piece is meticulously carved out of wax — a painstaking process that can take months to complete and has elsewhere largely been replaced by more time-efficient technology. For her Amarante bangle, for instance, with its spray of delicately rendered rosebuds on intertwined branches, every petal is sculpted individually, so that, just as in nature, no two are exactly alike. “It’s a lot of working and reworking,” she says. “Usually, when a wax is complete, it sits for a few weeks. Then I come back to it and see if I feel differently, if anything needs to change. Most of the time, I feel differently.” 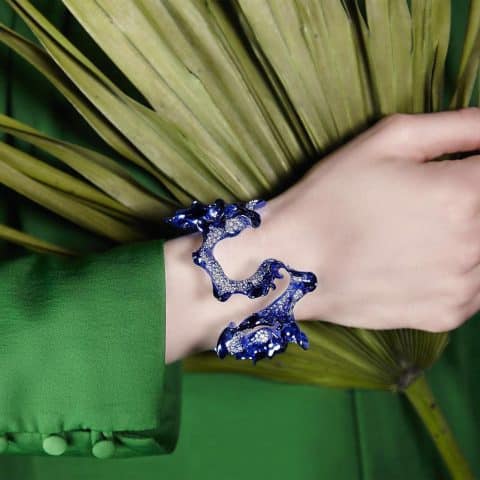 The shape of the Bonita cuff, rendered in white gold and custom blue rhodium studded with diamonds and sapphires, is reminiscent of seaweed tossed by the tide.

And while most jewelers find the stones first and build their design around them, Dani does the reverse. For her, the concept is king — with gems providing the palette she uses to realize it. Once she’s satisfied with her wax model, she’ll bring it along as she travels the world sourcing gems specifically for it. Because of this pursuit of the perfect stone, the production of a piece can take years. Displaying a pair of her pink-diamond-studded Fiorella earrings, inspired by the first blooms of spring opening on flowering branches, she explains, “I could have done this with pink sapphires, and it certainly would have been a different price point. But I really look at what’s best for the design, how to express it most beautifully. Here, with the colors and the old mine diamonds, pink diamonds enhance it, make it its best.” As further evidence of Dani’s exacting eye, the branches are made of a pale-green-brown titanium to accurately mimic a bush just emerging from winter’s chill. 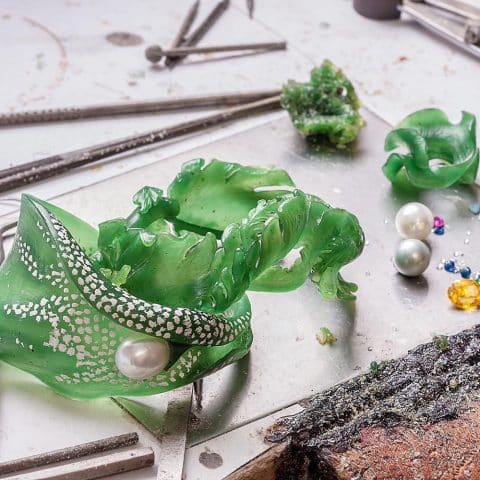 Each piece of Dani’s jewelry begins as an intricately carved wax model. “It’s a lot of working and reworking,” she says. “Usually, when a wax is complete, it sits for a few weeks. Then I come back to it and see if I feel differently, if anything needs to change. Most of the time, I feel differently.”

Nature is a constant font of inspiration, although Dani’s interpretations are never about mere prettiness. As in those earrings, she’s drawn to flora that perseveres — beauty that withstands the elements. Other collections reference glaciers, with dazzling shards of custom-cut moonstone and white diamonds; or cosmic nebulas, dotted with water opals and Paraiba tourmalines in hypnotic shades. Discussing a range of designs drawn from the otherworldly plants of the deep sea, she says, “All of us keep ourselves kind of hidden in everyday life. We get into the rhythm of work and family and responsibilities, and a lot of our aspirations and desires get buried within. To me, that’s the beauty of the deep sea — this vibrantly colored world hidden beneath the water.”

Dani’s fantastical renderings of the natural world are what piqued the interest of New York’s Macklowe Gallery, which now carries an unparalleled assortment of her jewels. Known for their collection of Art Nouveau masterworks, Ben and Hillary Macklowe see Dani as a modern-day successor to René Lalique and Henri Vever. Because of this, she has the distinction of being the only contemporary designer Macklowe represents — a resounding endorsement of her work’s collectibility and place within the canon of jewelry design. “Art Nouveau was all about forms and nature and color,” says Hillary Macklowe. “Although Neha uses stones that weren’t associated with Art Nouveau, she captures all the emotion and sensuality and movement that defined it.” 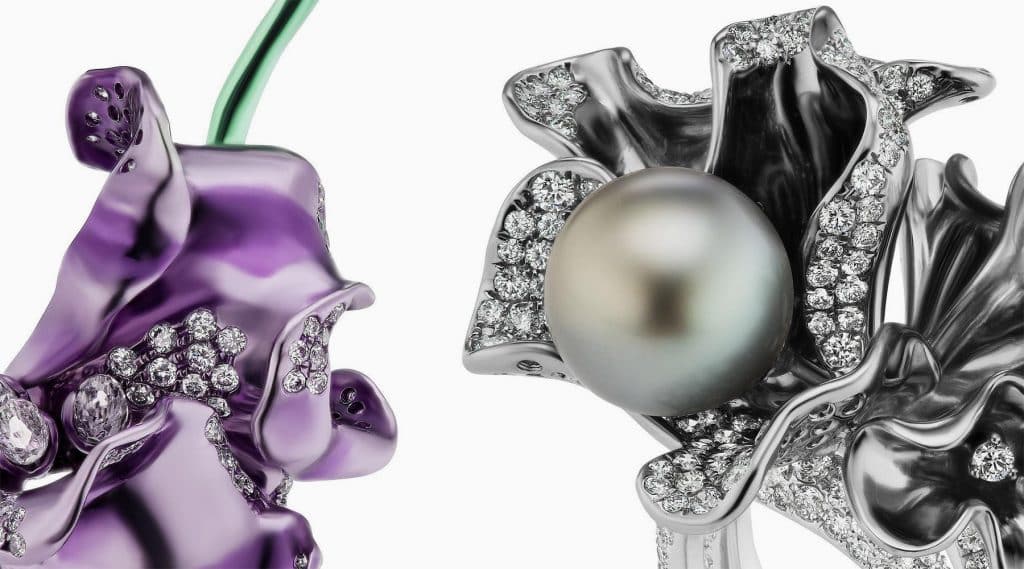 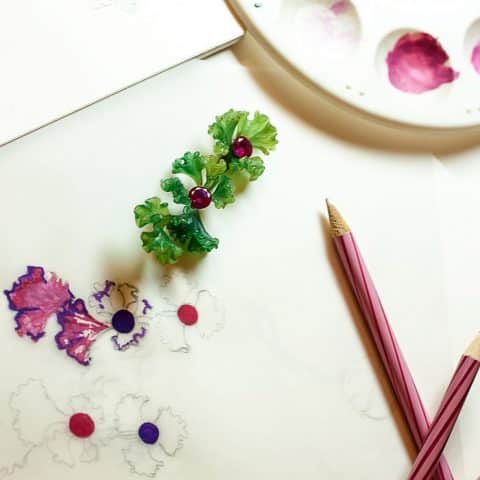 After sketching the design for her Brassica earring and carving it in wax, Dani experimented with different gemstones before deciding to set it with old mine diamonds.

Given that she produces only between 15 and 20 pieces a year, Dani’s work is arguably as rare as the antique treasures in which Macklowe typically deals. In the few years since launching her brand, she has become one of the world’s buzziest talents: She was included alongside such elite names Suzanne Belperron and Elsa Peretti in Antique Collectors Club’s 2017 book Women Jewelry Designers and, in 2019, she won one of Fashion Group International’s Rising Star Awards. While some designers would be content basking in the accolades, success has pushed Dani to pursue ever more challenging designs. “It’s easy to get into a comfort zone,” she says. “But what motivates me is, Does this piece have magic in it?”