JAR Chrysophrase Chalcedony Earclips
By JAR
Located in New York, NY
A chic & unusual pair of JAR earrings in silver and 18k gold; each designed as a circular chrysophrase ring, set on each side with a blue chalcedony cabochon with pavé-set single-cu...
Category

Free Shipping
JAR Paris Volume 2, Book
By JAR
Located in London, GB
This is the second volume of the work of JAR Paris - Joel Arthur Rosenthal, who is one of the most important and sought after jewellers of the late twentieth and twenty first centuri...
Category

Free Shipping
JAR Volume 1, Book
By JAR
Located in London, GB
This beautiful book is the 2013 reprint of an original from 2002, which was produced to coincide with an exhibition in London of the jewels of JAR (Joel Arthur Rosenthal). The photog...
Category 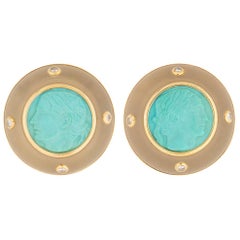 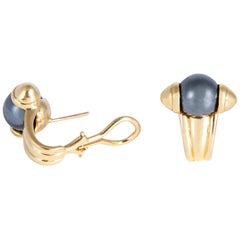 Previously Available Items
JAR Large Geranium Earrings
By JAR
Located in New York, NY
Very fine and scarce aluminum geranium earrings by JAR, Joel Arthur Rosenthal. Beautifully designed to remind one of the changing colors of foliage in the fall. These are the large ...
Category

Free Shipping
Jar Paris Wristwatch
By JAR
Located in San Antonio, TX
JAR collectible watch is from the Metropolitan Museum of Art New York 2013, no 0463. The honey-colored plastic bezel is signed JAR Paris and the case is signed JAR Swiss Made. Dial...
Category

L 9 in.
JAR Large White Gardenia Earrings
By JAR
Located in New York, NY
Fine and scarce "Gardenia" earrings by JAR, Joel Arthur Rosenthal. Made of white resin and featuring "omega" earring backs in 18k gold. These are made in limited edition. Pouch is in...
Category