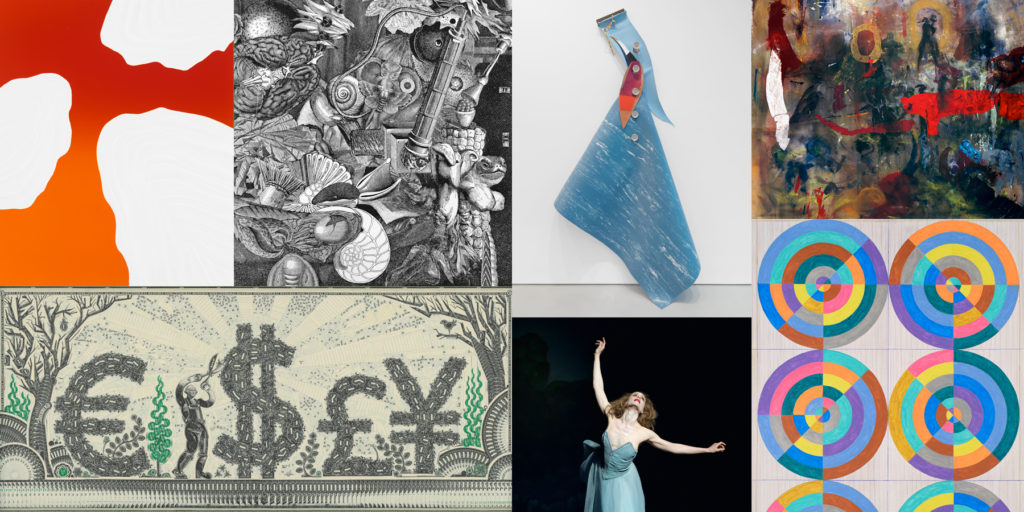 Our selection of the season’s best Manhattan exhibitions is full of pleasant surprises, from cut-up dollar bills to precarious furniture sculptures. 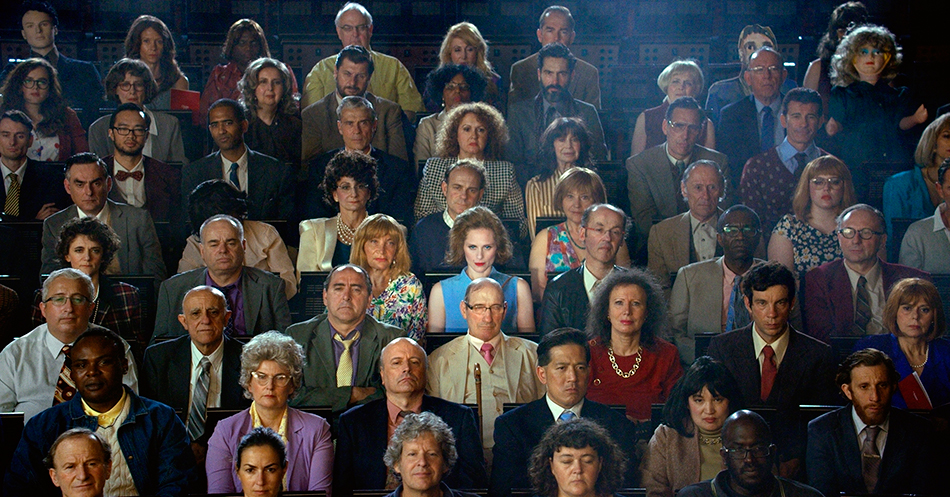 L.A. photographer and filmmaker Alex Prager is back with the U.S. premier of her latest project, La Grande Sortie (2015), a 10-minute film commissioned by the Paris Opera Ballet and shot in the Paris Opéra Bastille. Prager, who stages her sets and directs her actors, takes on the subject of performance in a story centered on a prima ballerina. She homes in on the dancer’s performance anxiety but also captures the audience as they react to the human frailty on display before them. Prager collaborated with the Paris Opera Ballet in adapting Benjamin Millepied’s celebrated choreography for “Amoveo,” which he created for the troupe. Radiohead producer Nigel Godrich composed the film’s score by sampling Stravinsky’s “Rite of Spring.” The show, at Lehmann Maupin‘s Chrystie Street gallery, also includes Prager’s photographs shot on location at the opera house. 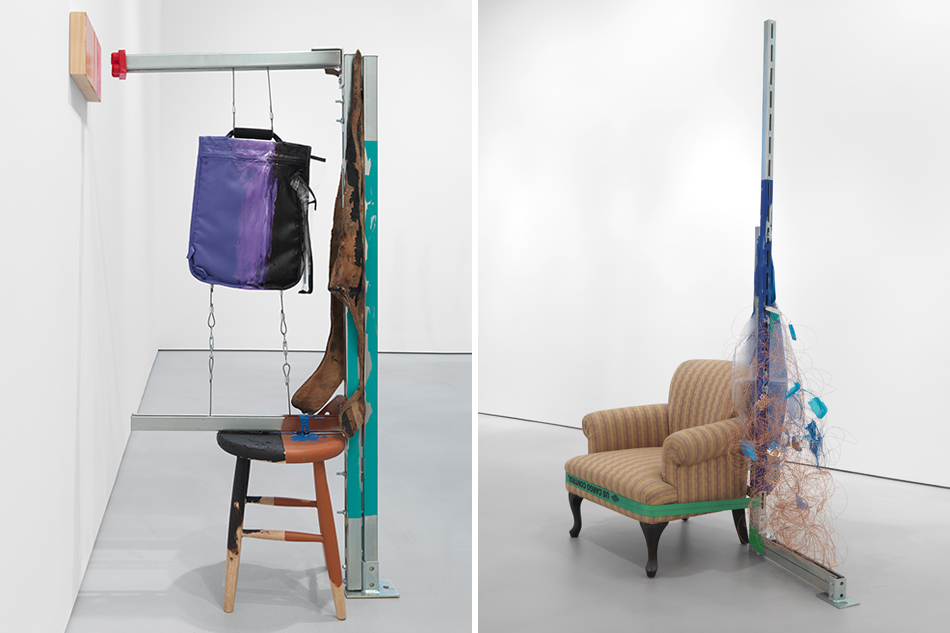 The multimedia sculptures Security Detail (left) and Assist: Smoke and Mirrors, both from 2016, are included in Jessica Stockholder’s solo show at Mitchell Innes and Nash. © Jessica Stockholder, Courtesy of the artist and Mitchell-Innes & Nash, NY

In Jessica Stockholder’s first show at Mitchell Innes and Nash since 2012, the pioneering mixed-media artist presents a new series of her curious hybrids. She makes her pieces by combining found and purchased objects, then altering and embellishing them with her own artistic materials, adding paint, string and the like. Included in the show is a large-scale site-specific stage-like structure as well as several of her “Assists,” sculptures that must lean on something to stand upright; here, two of them rest against matching club chairs. There is also a work incorporating a little stool, and another employing an ice-cube tray. Stockholder’s use of building materials, hardware-store finds and furnishings provides a disconcertingly domestic subtext. She binds these elements neatly into household vignettes that feel familiar but still seem oddly wrong, as though they’d been created by some destructive force. 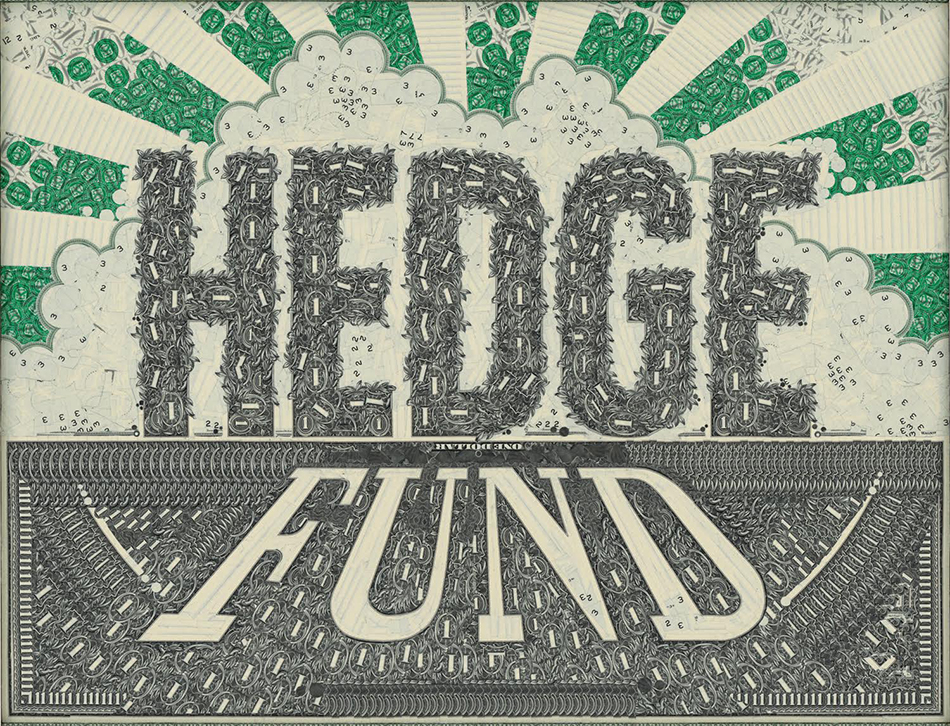 Hedge Fund, 2016, by Mark Wagner, on view as part of “I’m Mark Wagner and I Approve This Message” at Pavel Zoubok. Courtesy of the artist and Pavel Zoubok Gallery, New York

As we descend into the depths of an election cycle fraught with unsavory connections between power and money (among many other things), what could be more topical than a new series of Mark Wagner‘s clever cut-paper collages constructed from U.S. currency? “I’m Mark Wagner and I Approve This Message,” as the show is cleverly titled, features new work made from thousands of meticulously cut and spliced dollar bills. Pavel Zoubok‘s eponymous West Chelsea gallery specializes in collage — an art form long associated with the avant-garde. With their engraved markings from the printed bills, these pieces don’t look all that radical, but they merge social commentary and political satire with a good dose of rebelliousness. Regardless of what side of the political spectrum you’re on, you’ll find Wagner’s creations provocative and just plain fun to look at. 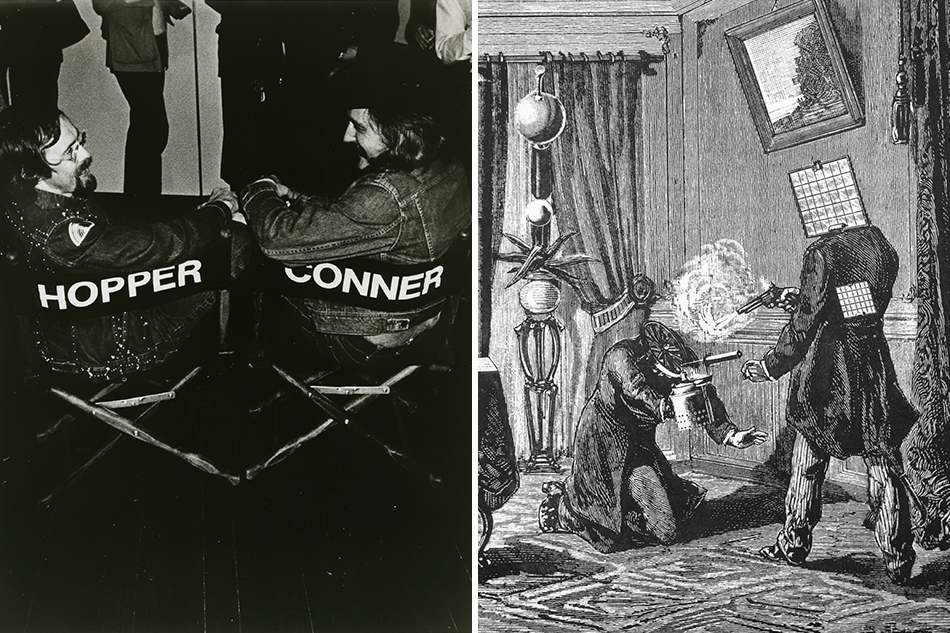 The late artist Bruce Conner wore many hats rather masterfully: filmmaker, assemblage creator, draftsman, collage artist, photographer, printer and, most notably, mischief maker. He was particularly adept at obscuring his own identity and did so repeatedly. One of the most infamous tales surrounding his persona concerns the time he wanted to stage a show of his work — psychedelic cut-paper collages made from anonymous 19th-century engraved illustrations — and pretend the pieces were, in fact, made by his friend Dennis Hopper, unbeknownst to the actor. Conner’s Los Angeles dealer, Nicholas Wilder, rejected the idea, so the show never happened. But in the early 1970s, Kathan Brown, the founder of Crown Point Press, helped Conner create a set of exquisite prints based on the collages that were then bound into three volumes called DENNIS HOPPER ONE MAN SHOW. A copy resides in the collection of MoMA, where a brilliant retrospective devoted to Conner is now on view, but it is Chelsea’s Senior & Shopmaker Gallery, which handles all the prints for the artist’s estate, that is exhibiting a selection from the folios. They’re redolent of Max Ernst yet entirely Conneresque in their eerie darkness and extraordinary, nearly obsessive detail. 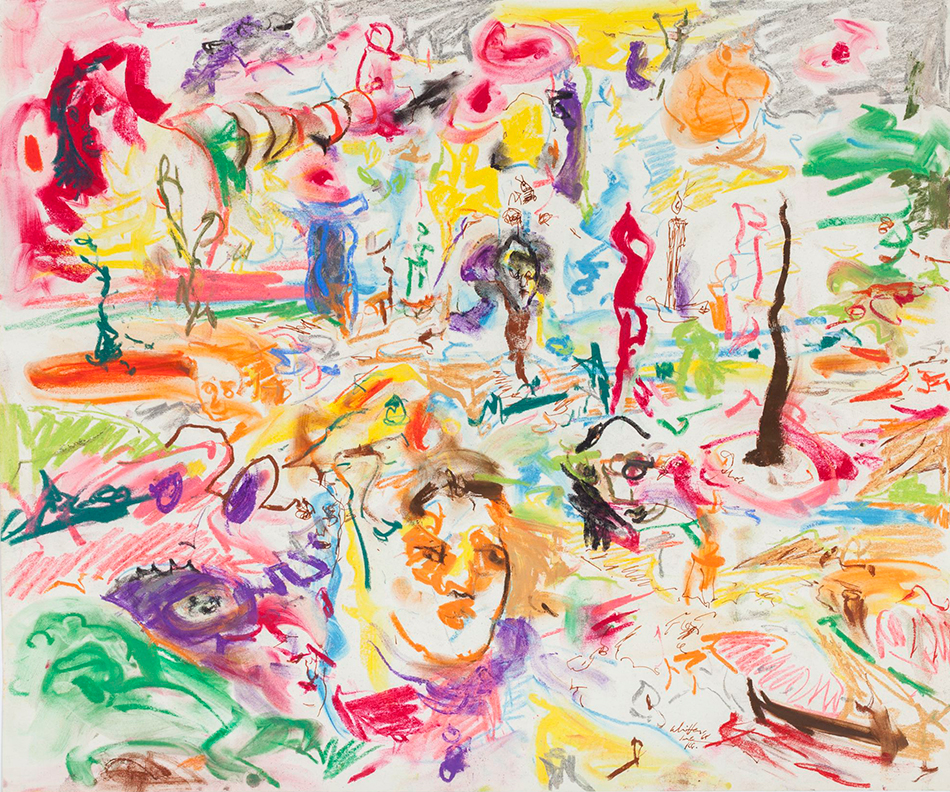 The selection of 1960s Jack Whitten paintings and drawings currently on view at Allan Stone Projects, in Chelsea, beautifully merge the influence of Abstract Expressionism, which weighed heavily on many artists of the time, with figuration. By the late ’60s, Whitten had clearly devised his own vibrant, energetic language of mark making — a kind of controlled, graffiti-esque scrawling, with faces and figures emerging through wiry brushwork. But some of these works also hint at the processes of squeegeeing and scraping that he developed in the early ’70s and that we now associate so closely with the Alabama-born artist. Whitten, one of the era’s best-known African American abstractionists, left the South for New York City in the midst of the Civil Rights movement. His work is no more ethnic than that of, say, Willem de Kooning or Cy Twombly (whose pieces Whitten’s recall), but the frenetic marks and the immediacy of the imagery here convey something of the social strife of the era. This show follows a major traveling retrospective last year, and we’re likely to see much more of Whitten in the future as his art historical significance becomes increasingly clear. 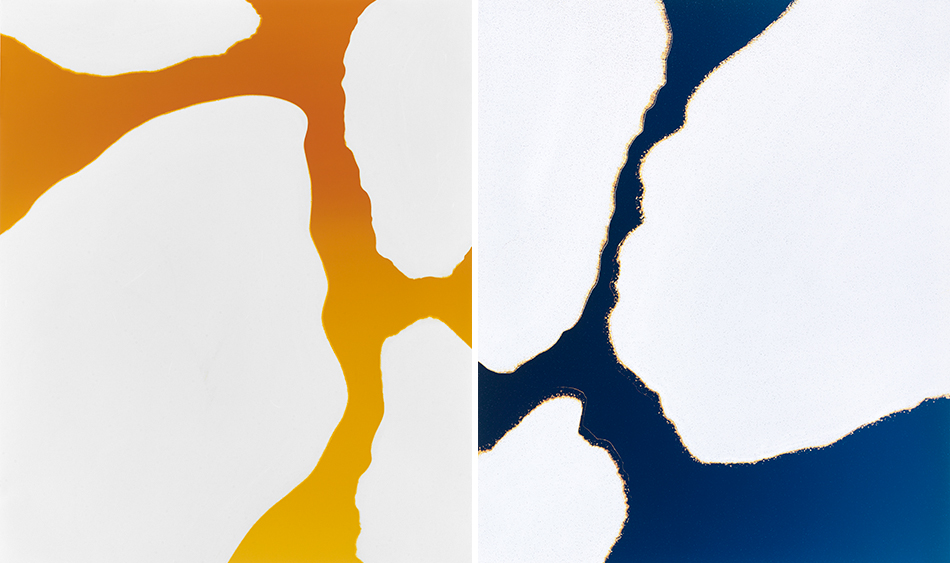 Artist Marco Breuer employs photography as his medium, but rather than take pictures, he makes them. The New York–based German artist is known for his complex abstractions formed by subjecting photographic materials to physical processes like scraping and peeling. In this new series of works, he plays with absence and presence, abstraction and figuration, creating silhouette-like shapes that feel organic. (One picture brings to mind Robert Longo’s famous falling men from the 1980s, but the black form in the Breuer might just as well be negative space.) To make the pieces, Breuer scrapes away sections of the light-sensitive emulsion that coats the photographic paper. The scraped areas often have a strong physical presence, and there is a juiciness of color and a slickness of texture that couldn’t be achieved with paint. This show at Chelsea’s Yossi Milo Gallery precedes a traveling solo exhibition of the artist’s work opening at the Milwaukee Art Museum next year. 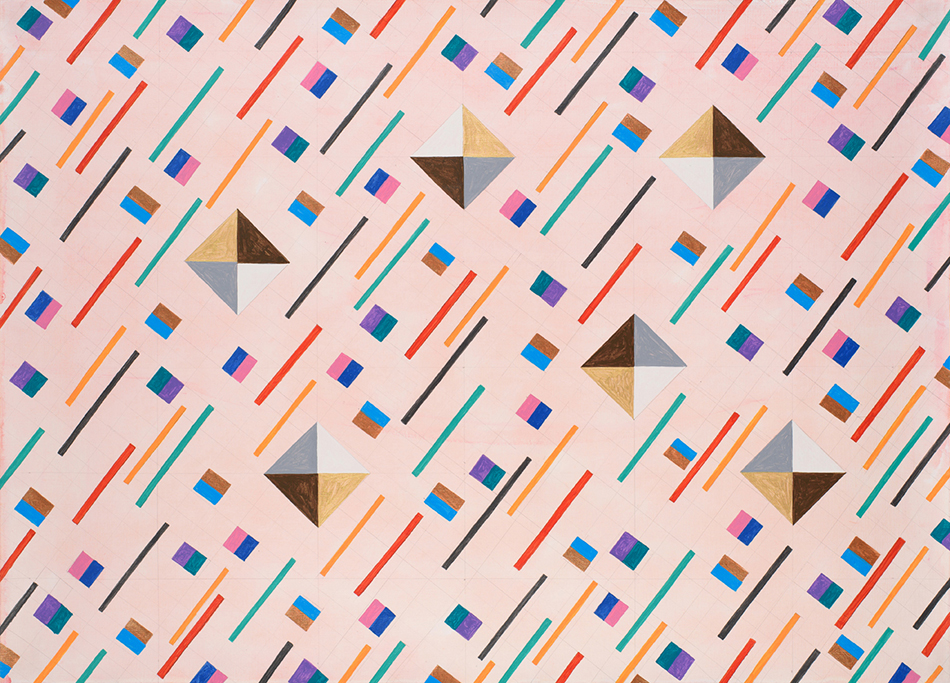 Sueños diurnos No.1, 2016, one of the works in “Outer Life,” Tulio de Sagastizábal‘s new show at Praxis. Courtesy of Praxis NY

Buenos Aires–based artist Tulio de Sagastizábal uses a simplified language of grids and circles to create rich patterns in candy colors. Viewing the pieces in “Outer Life,” at Praxis, it’s easy to think of Frank Stella’s early geometric paintings or even Piet Mondrian’s abstract streets or Jasper Johns’s targets. These works, however, are in acrylic on paper, a medium that gives them a bit of vulnerability. In some, the empty squares of graph paper show through; the obsessiveness of coloring in the grids, coupled with the unrefined material, has a lovely, humanizing effect. 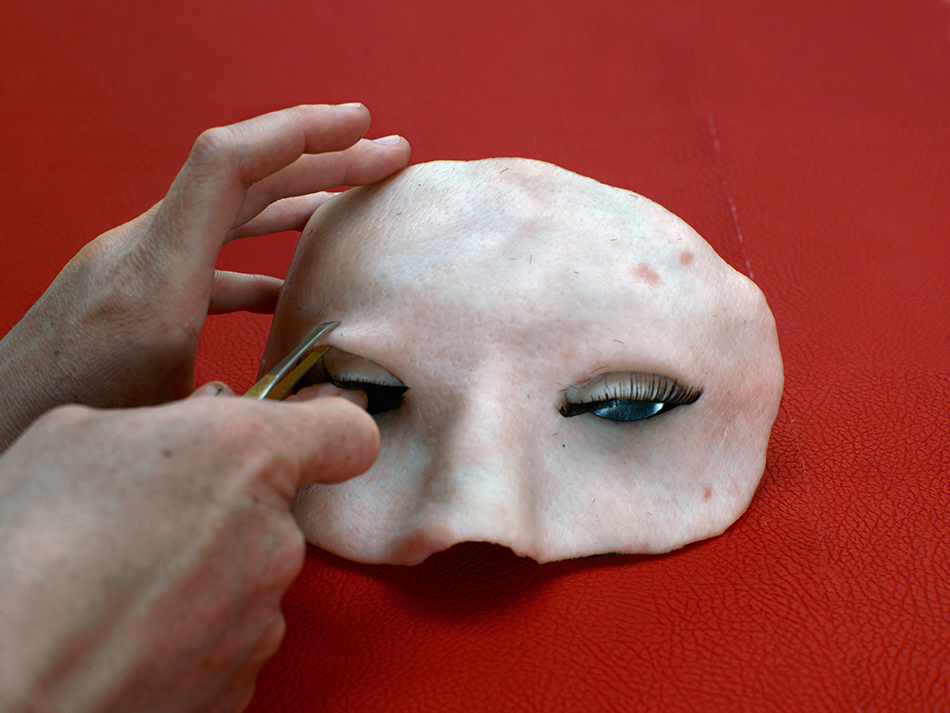 Selfie #15, 2015, a work included in Aneta Grzeszykowska’s show “No/Body,” jointly mounted by the galleries 11R and Lyles & King. Courtesy of the artist and Raster gallery, Warsaw

At a time when so many non-artists use photos of themselves to weave stories — true and fictional — about their lives, self-portraiture has taken on some weighty socio-cultural significance. It has also provided rich fodder for artists. Among those shedding light on the illusionism (not to mention delusionism) of the self-portrait in refreshingly creative ways is the Polish artist Aneta Grzesykowska. In “No/Body,” a show jointly presented by Lower East Side galleries 11R and Lyons & King, Grzesykowska presents several new series that use collage, photography and sculpture to cleverly toy with the rules of self-representation. For the series “Selfie,” for instance, she photographed her hands putting the finishing touches on sculptural avatars of herself made from such materials as pigskin. In another series, she collaged images of her nude body onto someone else’s portrait. She seems to deliberately channel Cindy Sherman in some of her work, but somehow these images still feel satisfyingly new and raw.