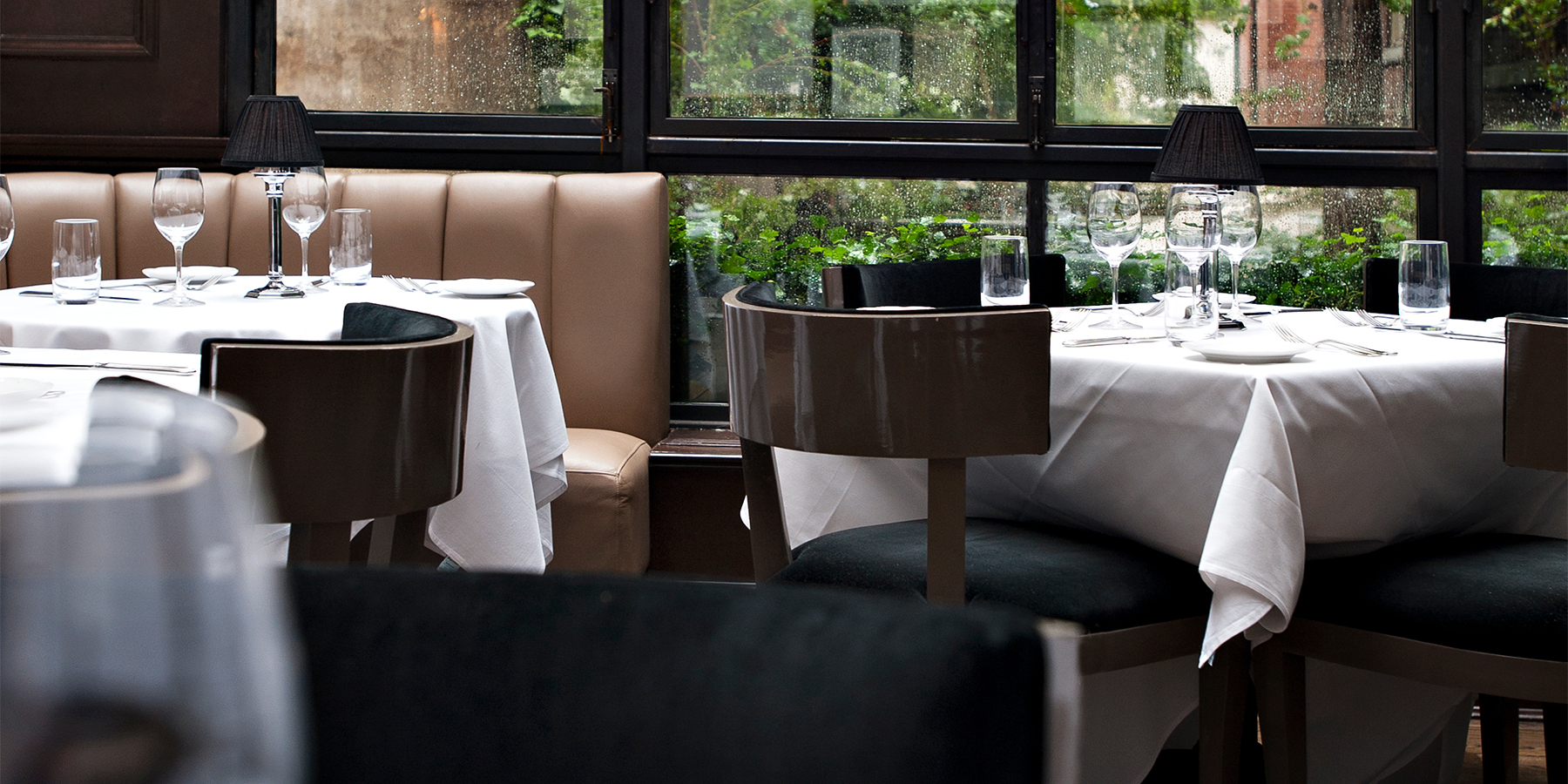 Three fresh-thinking firms are transforming our dinner, one eye-popping space at a time.

Creating a successful restaurant requires a special kind of alchemy. The same ingredients — concept, food, location, service, design — can be combined in infinite ways with widely varying results. And while it may not be as front-and-center as what’s on the plate, a restaurant’s design often proves just as important as its cuisine. Everyone can recall a great-tasting meal marred by bad lighting or a stale environment. But when a restaurant hits that sweet spot — convivial crowds, a glowing warmth, a feeling of escape, if only for a few hours — it is pure magic. In that spirit, we turned the spotlight on a trio of New York-based interior design firms that specialize in creating just this sort of food-focused social space: one, AvroKO, well-established, and two others — Dekar Design and Meg Sharpe Interiors — on the rise. Though they have different approaches and varying aesthetics, all three have the ability to draw in the crowds and keep them coming back. 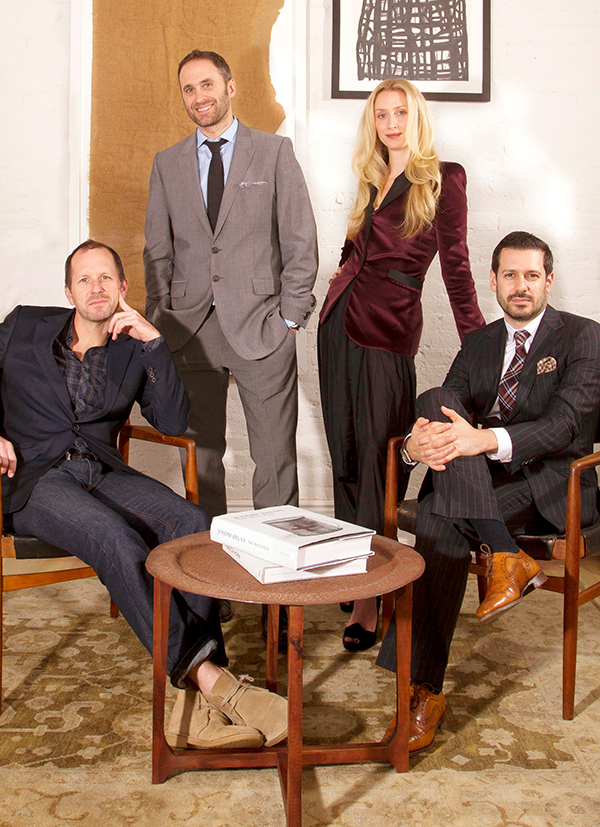 The minds behind AvroKO, from left: Greg Bradshaw, Adam Farmerie, Kristina O’Neal and William Harris. Today the firm has a staff of more than 60 spread across three different cities. Photo by Yuki Kuwana

Looking at AvroKO’s work, one gets the feeling that the firm, which is behind nearly 30 restaurants in more than a dozen cities worldwide, doesn’t just focus on designing fresh spaces: They make it a goal to create transformative experiences. Their restaurants — whether a futuristic floating eatery in Singapore or a Mediterranean bathhouse–inspired lounge in Las Vegas — feel like inhabitable stage sets but with none of the hokeyness that might imply.

Consider, for example, two New York projects. Of Madam Geneva, a sexy, secreted bar in Noho, New York magazine wrote that it “feels like a backroom bar for 19th-century governors in Singapore.” A few blocks away, at their restaurant Public, a wooden library-card catalogue, clipboard menus and vintage mailboxes filled with wine suggest the municipal look of post offices, libraries and civic buildings, thus signifying, as AvroKO puts it, their desire to make quality food a common commodity. (In a first-time sweep for a single firm, AvroKO won the James Beard Award for Outstanding Restaurant Design and Outstanding Restaurant Graphics for Public in 2004).

Founded in 2001 and comprised of four partners — William Harris, Greg Bradshaw, Kristina O’Neal and Adam Farmerie, who work out of offices in New York, Bangkok and San Francisco — AvroKO designs every aspect of a project, from furniture to branding, menus to uniforms. They even own and operate several of their own restaurants, including Manhattan’s Saxon & Parole and the Thomas in Napa Valley, lending the team a unique view into the industry’s realities. “Every week we learn something clever about how to optimize clients’ spaces through experimentation in our own,” says Farmerie.

So what’s their definition of a successful eatery? “The patron should feel loved,” says O’Neal. “It’s hard to get the trifecta — the food preparation has been done lovingly by the chefs, the service done with joy and the space designed with affection in the details — but the most memorable restaurants give you the overwhelming sensation that a very quiet love is everywhere.” 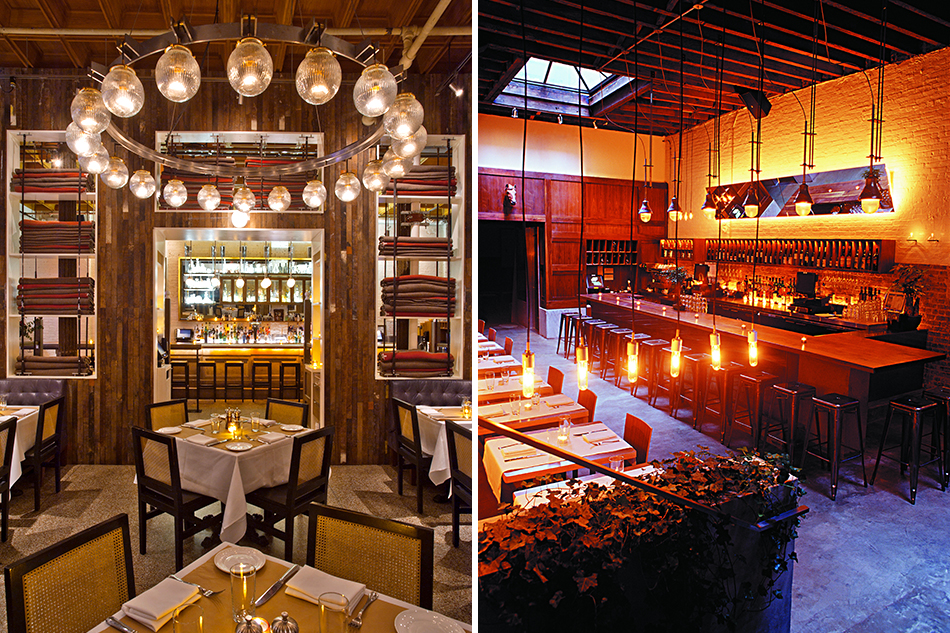 Left: In addition to designing restaurants, AvroKO owns several as well, including downtown Manhattan’s Saxon & Parole, which is named for two turn-of-the-century racehorses and has a subtle equestrian theme. Photo by Jason Lang; Right: At Public, another AvroKO-owned and -operated restaurant, the “municipal” look contrasts with the “free-spirited fusion” cuisine, which includes grilled kangaroo and Szechuan-crusted tenderloin. Photo by Jason Lang 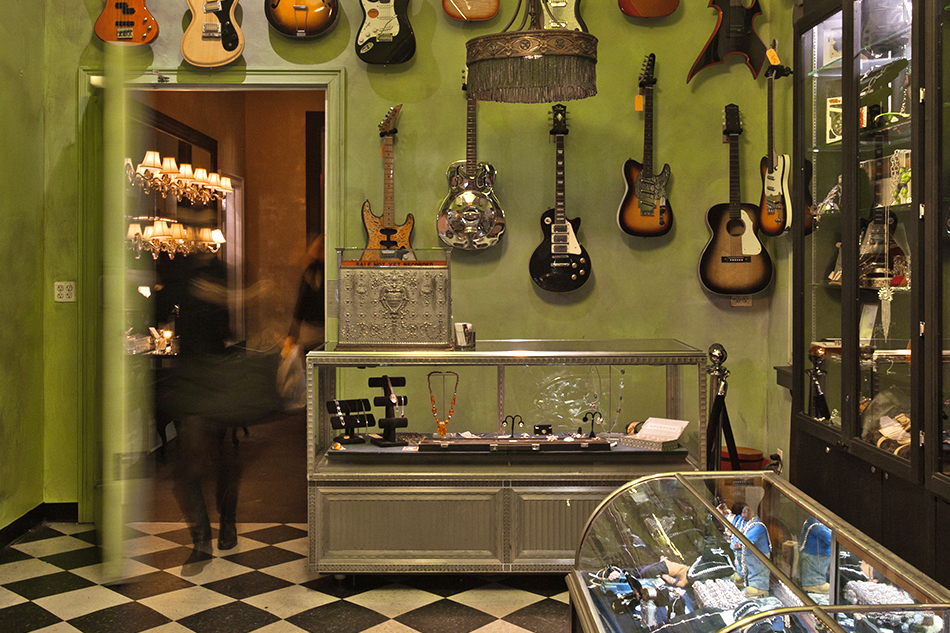 To reach the restaurant Beauty & Essex on the Lower East Side, one must first pass through a faux pawn shop complete with vintage guitars and other rock-and-roll paraphernalia. Photo by Jason Lang 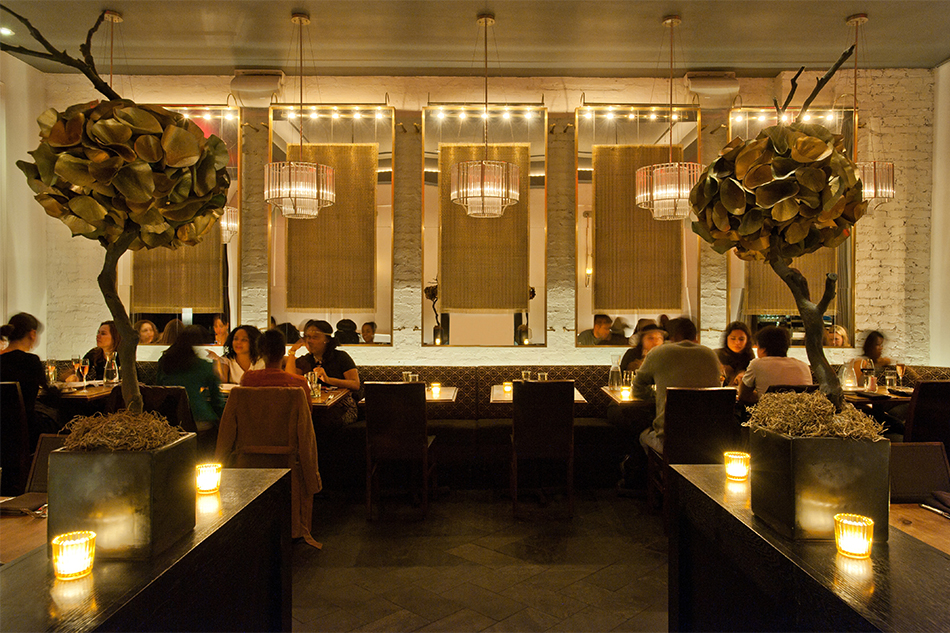 Once inside Beauty & Essex, diners are rewarded with an interior that, its creators say, is meant to recall “a fashion doyenne’s 1930’s department-store fantasy.” Photo by Jason Lang

Homes Away From Home
Dekar Design 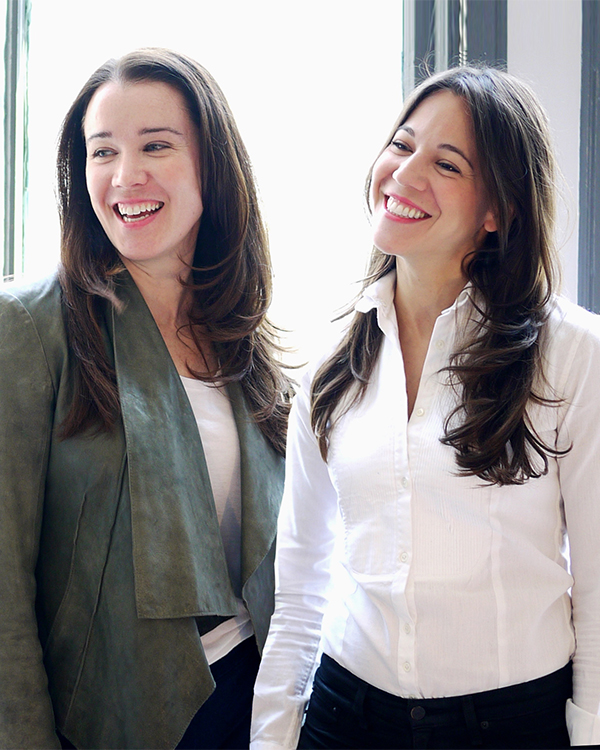 From left: Caroline Grant and Dolores Suarez, both native New Yorkers and graduates of Georgetown University. Courtesy of Dekar

Dekar Design co-founders Caroline Grant and Dolores Suarez made their mark on the New York restaurant scene in 2007 with Bobo, a charming hideout ensconced in a West Village townhouse. Decorative painters and interior designers, the pair created the townhouse space to feel less like a restaurant and more like the home of a quirky, well-traveled aunt, all mismatched dining chairs, vintage family photos and novels stacked on fireplace mantles. From the black-and-white striped foyer to the pale blue-and-red dining room, Grant and Suarez gave each room and floor its own palette and style. “We really look at commercial spaces from a residential design perspective,” explains Grant of their approach.

While their look has evolved with the laid-back chic of their newer West Village hotspot, Rosemary’s (2012), and with the understated sophistication of Trattoria Nervosa (2011), in Toronto, their interest in creating a hybrid of home and restaurant continues. Rosemary’s, for example, features a bar that looks like a cheerful residential kitchen, with painted cabinets, a colorful vintage-tile backsplash, hanging cooking utensils and lemon trees.

The space beautifully blurs the line between indoors and out, reflecting the farm-fresh menu that showcases veggies grown in the restaurant’s own rooftop garden: Plants are sprinkled throughout, fruits and vegetables hold pride of place as design elements and, in the warmer weather, tall windows are thrown open, letting the roaring buzz of happy diners leak outside. Regardless of the project, the two are always after one goal: “We want our spaces to have character and soul,” says Suarez. 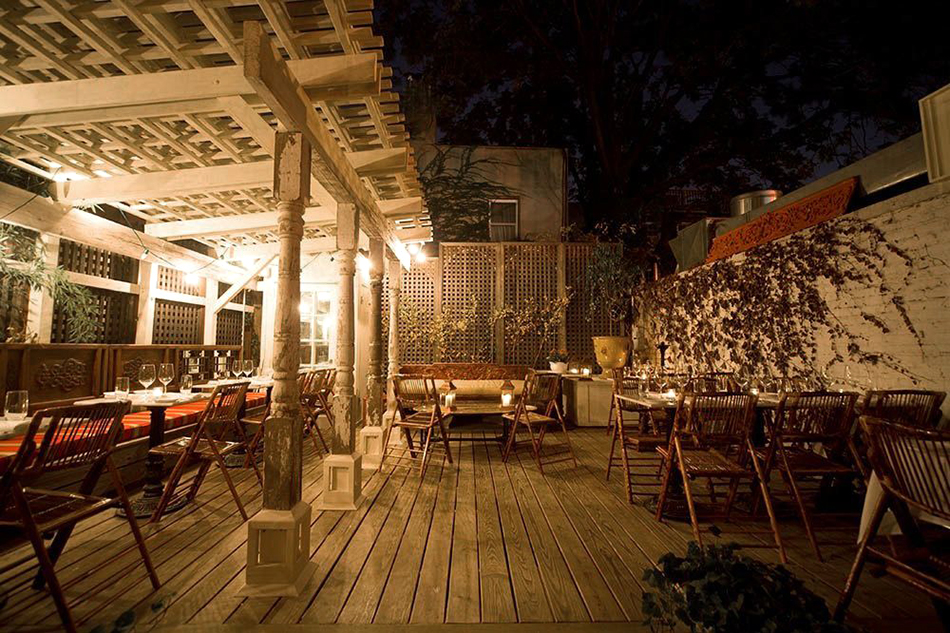 For the patio of Bobo, also located in the West Village, Grant and Suarez repurposed vintage Chinese doors as the seatbacks of the banquettes. Courtesy of Dekar 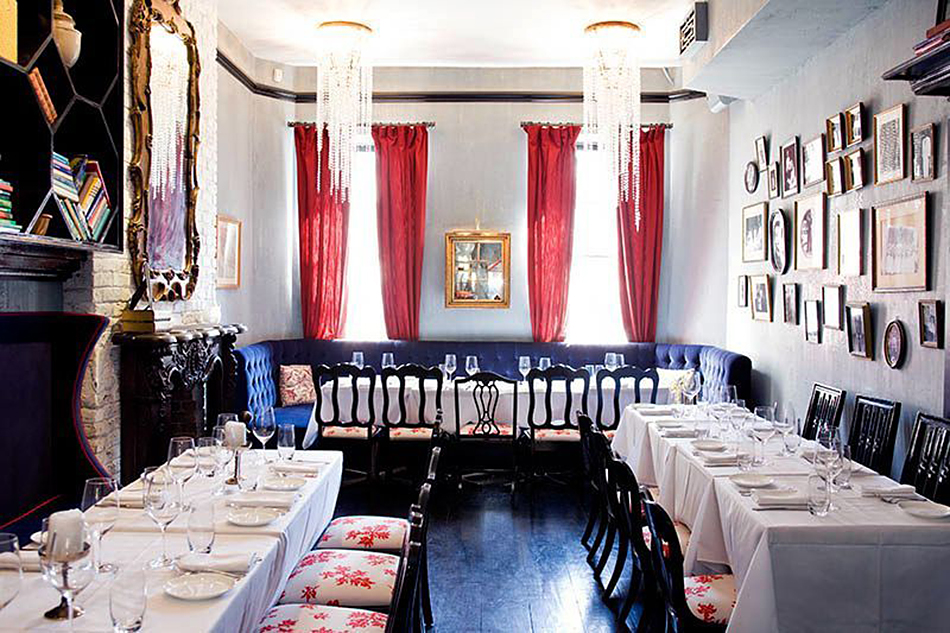 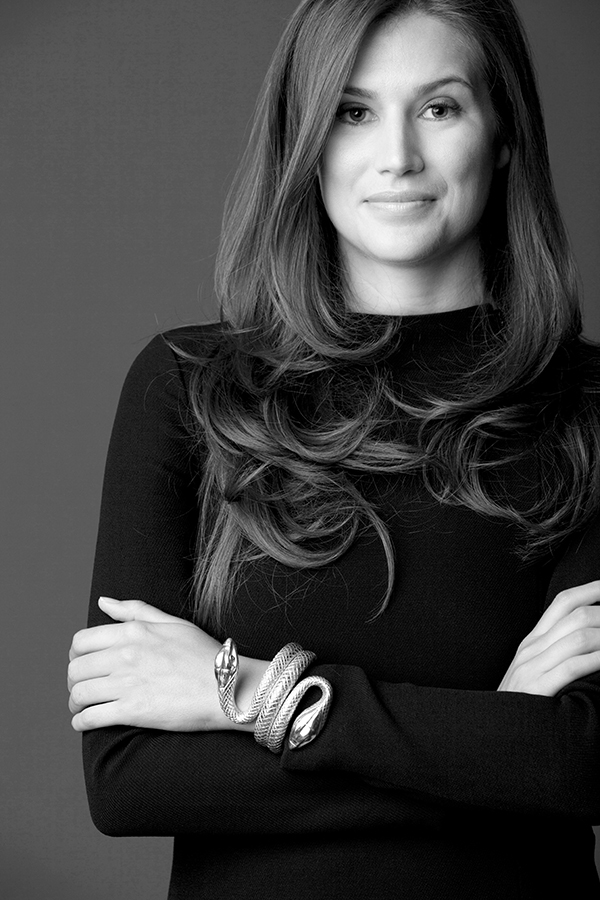 When Meg Sharpe initially got an offer to design the West Village restaurant the Lion, her initial response was a firm, “Absolutely not.” To be fair, Sharpe hadn’t even applied for the job. She already had a full-time position at Ralph Lauren in the international store development division. But after months of listening to her friend John DeLucie — the Lion’s chef — and his co-owners complain about other designers not understanding their vision, Sharpe pulled together a few tear sheets to help them in their discussions. When they saw her ideas, however, they immediately wanted Sharpe to be their collaborator. “They wore me down,” Sharpe says with a laugh. “They told me I had to do it.”

In her mid-20s at the time, Sharpe juggled the Lion project with her Ralph Lauren duties, working on it at night and during the weekends. Ultimately, she gave the place a clubby, old-world feeling, one marked by art-covered walls, vintage lighting and green leather banquettes.

The Lion, which opened in 2010, quickly became a downtown destination (DeLucie, after all, is behind the other crowd-magnets Waverly Inn and Monkey Bar), and, not long after, Sharpe started her own firm. Her collaboration with DeLucie has continued, encompassing the Crown, on the Upper East Side; Bill’s, in Midtown; and the newly opened Redhouse, in London. And beyond her DeLucie projects, she also has a Times Square supper club, a Paris-inspired Chelsea coffee bar and an Art Deco hotel project in Miami in the works.

For each project, Sharpe designs with a specific muse in mind: for Crown, it was Coco Chanel; for Bill’s, a photo of a sharply-dressed Old English gentleman sitting on a chaise, smoking a pipe, with brandy in hand. “I really imagine the person that I want to use the space,” says Sharpe, “and then I create the restaurant for them.” 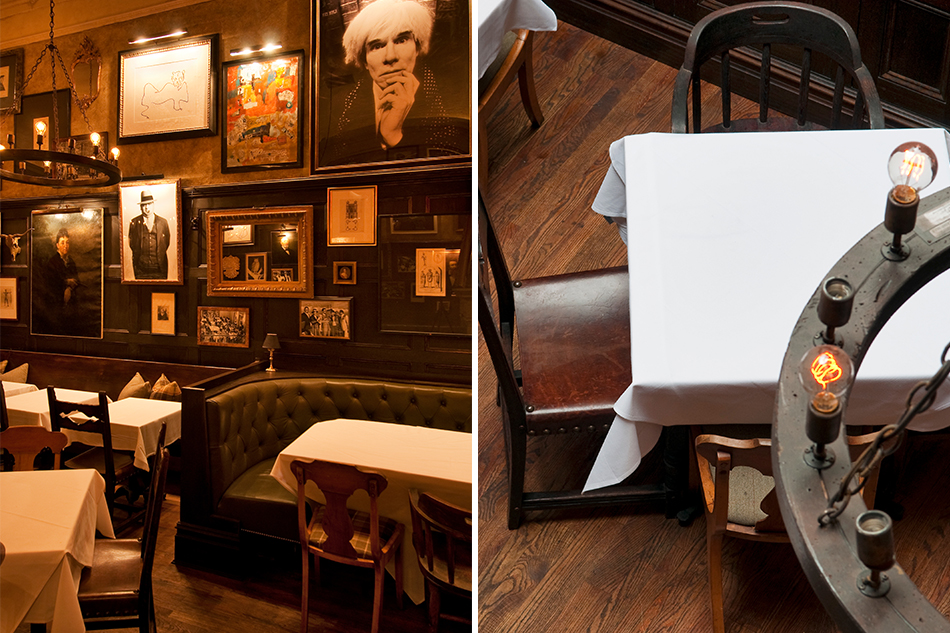 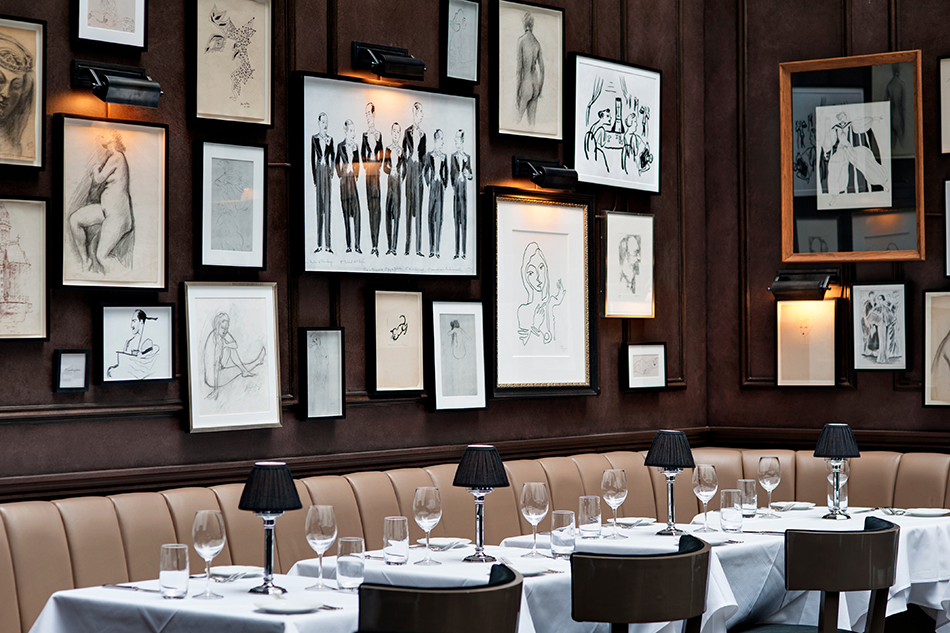 Sharpe acquired the Crown’s collection of prints and engravings from various sources, including 1stdibs and flea markets. Photo by Adam Macchia 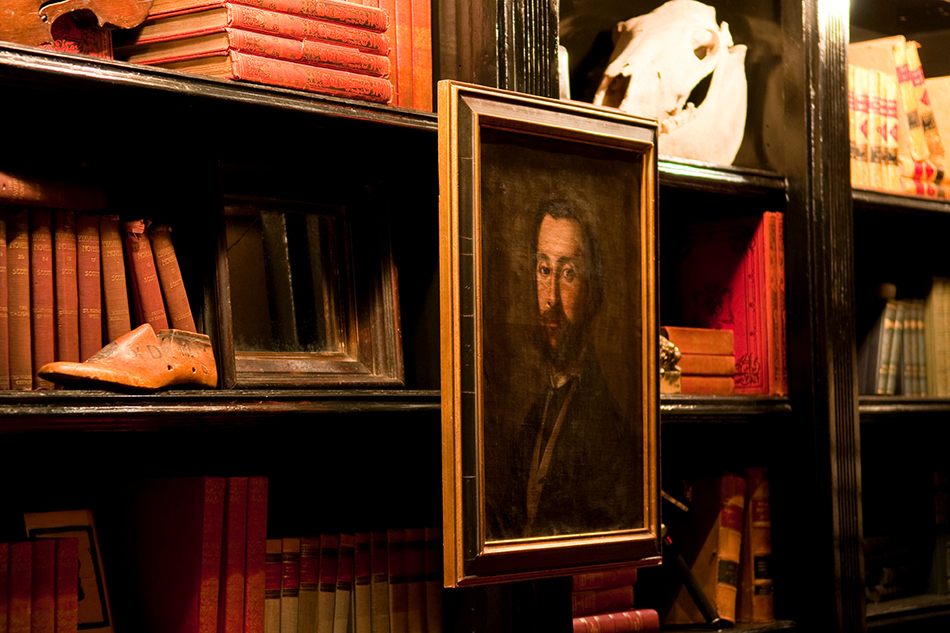 A detail of the Lion reveals the old-world aesthetic created by its designer. Photo by Adam Macchia