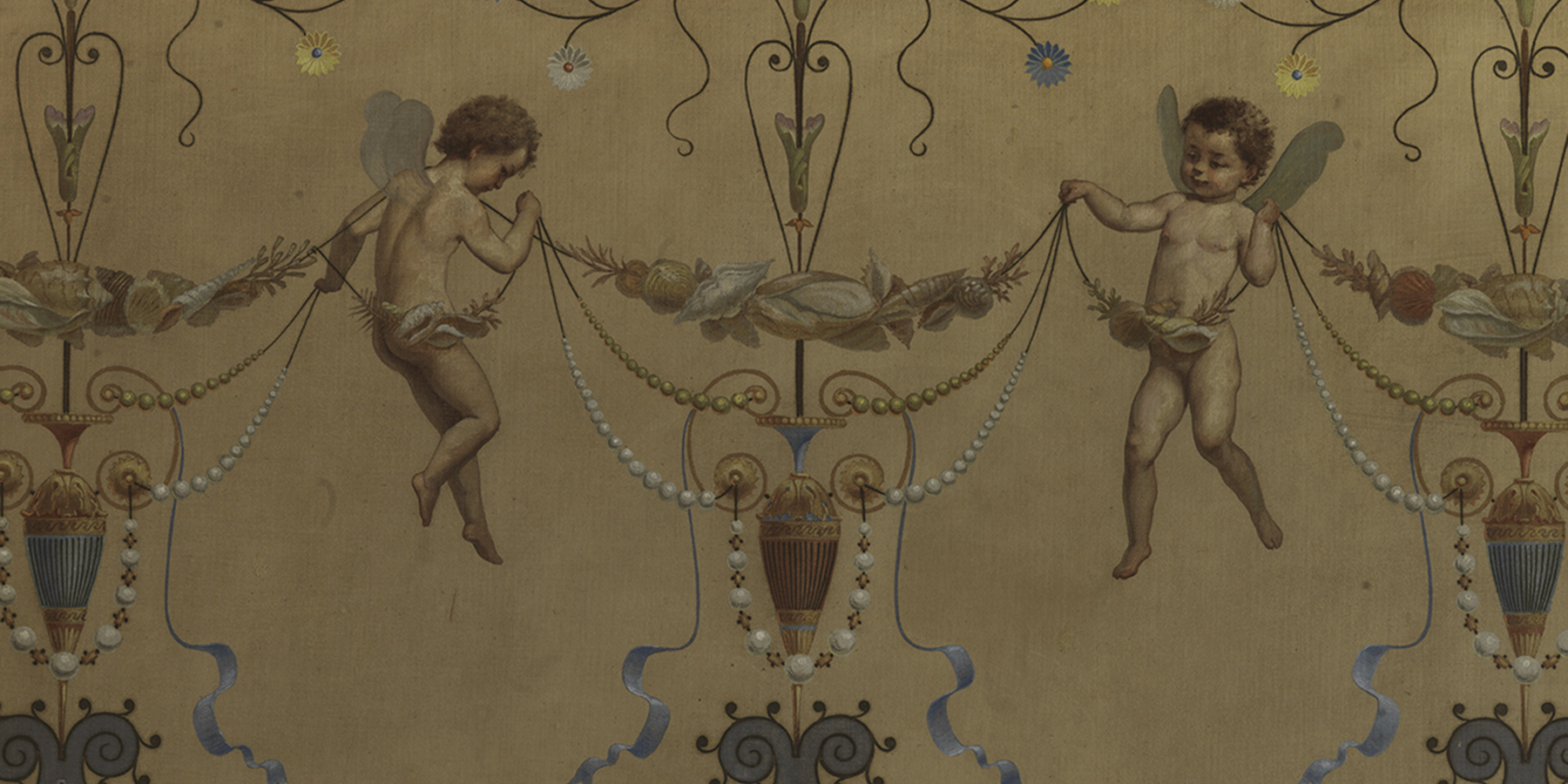 With interest growing in the designs of the Aesthetic Movement, a new permanent installation and an accompanying exhibition at the Metropolitan Museum of Art recalls lost passions and the émigré cabinetmaker who gave them form. 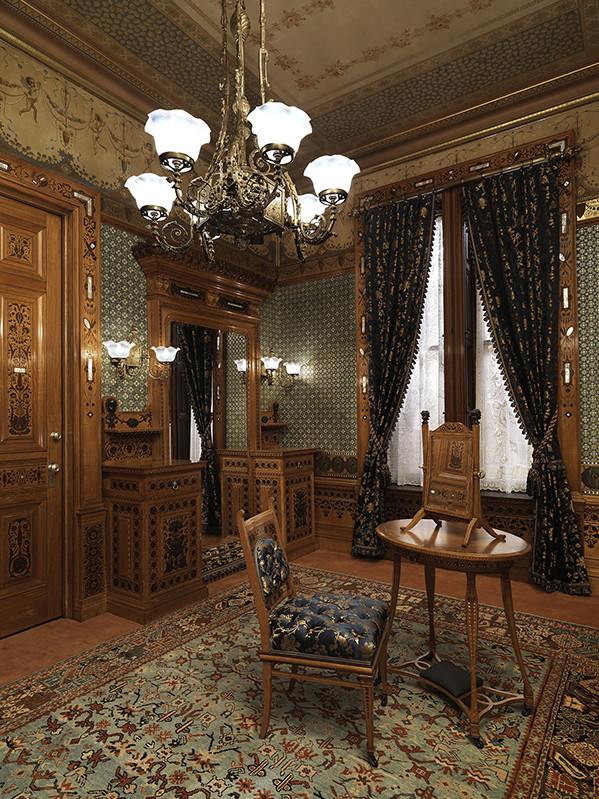 We Americans have always obsessed over real estate. In the 1880s, our robber barons, who were richer than European dukes and Asian potentates, built themselves imitation French châteaux and Italian palazzi up and down Manhattan’s Fifth Avenue — the magnificent mansions made famous by Mark Twain in his 1873 novel, coauthored by Charles Dudley Warner, whose title begot the term the Gilded Age.

Only some of these houses had society owners, however. Near the homes of the Vanderbilts and Astors, for instance, a Virginia-born courtesan named Arabella Yarrington Worsham had a large brownstone just off Fifth Avenue, at 4 West 54th Street (now the garden at the Museum of Modern Art). Her house, built in 1865, may not have had as grand an exterior as many of its neighbors, but the interior was far more luxurious.

From 1877 to 1884, this brownstone belonged to Worsham (known as Belle), the mistress of railroad tycoon Collis P. Huntington. He met her in 1869, in Richmond, where he was acquiring control of the Chesapeake and Ohio Railroad. She was 19; he was 48. Smitten, he moved her entire poverty-stricken family to New York. In 1877 she managed to buy the house on West 54th Street, and beginning in 1881, Huntington gave her an unlimited budget to hire the German émigré cabinetmaker-decorator George Alfred Schastey to expand and redecorate the entire building.

Schatsey’s design for Worsham is one of the most outstanding extant examples of Aesthetic Movement decor in America. On December 15, New York’s Metropolitan Museum of Art unveiled one of his creations — Worsham’s sumptuous dressing room, with its original furnishings — alongside an exhibition of other work by Schastey and his rivals. 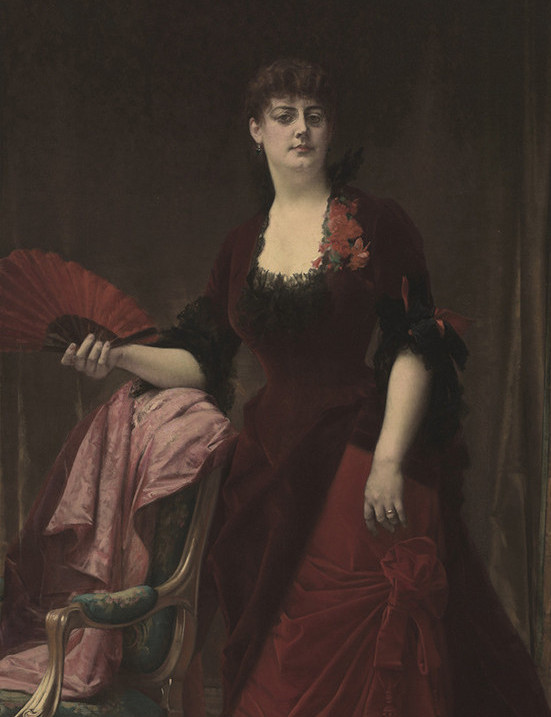 Worsham, depicted here in an 1882 portrait by Alexandre Cabanel, was the mistress and eventual wife of of railroad tycoon Collis P. Huntington. Upon marrying him, she sold her Schastey-designed home on West 54th Street — now the site of the Museum of Modern Art’s sculpture garden — to John D. Rockefeller. Portrait courtesy Fine Arts Museums of San Francisco, Gift of Archer M. Huntington, 1940

The dressing room is adorned top to bottom: Each wall has a frieze of dancing cupids above expanses of hand-painted teal geometric patterns and built-in cabinetry with matching satinwood dressing table, mirror and side chairs. Pattern can be seen on every surface, from the parquet floor to the ceiling, which is covered with stenciled checkerboard motifs and a painted floral mural.

Most remarkable is the honey-colored satinwood door surround, which depicts, in purpleheart marquetry, the necessaries of a woman’s toilette: hand mirror, brush, scissors, combs, pearl necklaces, earrings and étui (a decorative case for sewing materials). The elaborate custom hardware is silvered brass. Interspersed with the marquetry and carved purpleheart swags are mother-of-pearl inlays that must have glowed in the light of the opalescent glass chandelier. A Turkish carpet covers the  floor. This is a room for seduction, an intensely private space that is unencumbered by anything practical. It’s as lavish as you can get, which is exactly the point.

For most of us, the Aesthetic Movement is a hard style to wrap our heads around, mostly because we don’t encounter examples in their proper environments: An ornate inlaid Herter Brothers sideboard might sit in a white museum gallery, looking like a lonely over-the-top sculpture. Viewing an entire ensemble, however, with its luxurious layering of pattern, rich textiles, wall lights, period ceramics, stained glass and metalwork, you get the appeal. These are not just period rooms — these are fantasies.

Met decorative arts curator Alice Cooney Frelinghuysen conducted years of pioneering research on Schastey, who, unlike his Gilded Age contemporaries the Herter Brothers and Louis Comfort Tiffany, is barely known. Now, however, we are learning that in the 1870s, ’80s and ’90s, his was one of New York’s preeminent cabinetmaking and decorating firms. The exhibition that accompanies the Met’s unveiling of the room (“Artistic Furniture of the Gilded Age,” on view until May 1) includes several of his works: teal velvet curtains with red appliqués; a brass chandelier with glass shades and facets of mother-of-pearl and semiprecious stones; an immense oxidized-oak tall case clock with meticulously carved faces and floral motifs; a cabinet with brass, bronze and agate decoration; and, best of all, a magnificent Steinway grand piano made of Schastey’s favorite satinwood and purpleheart in multiple patterns, with brass and silver mounts. 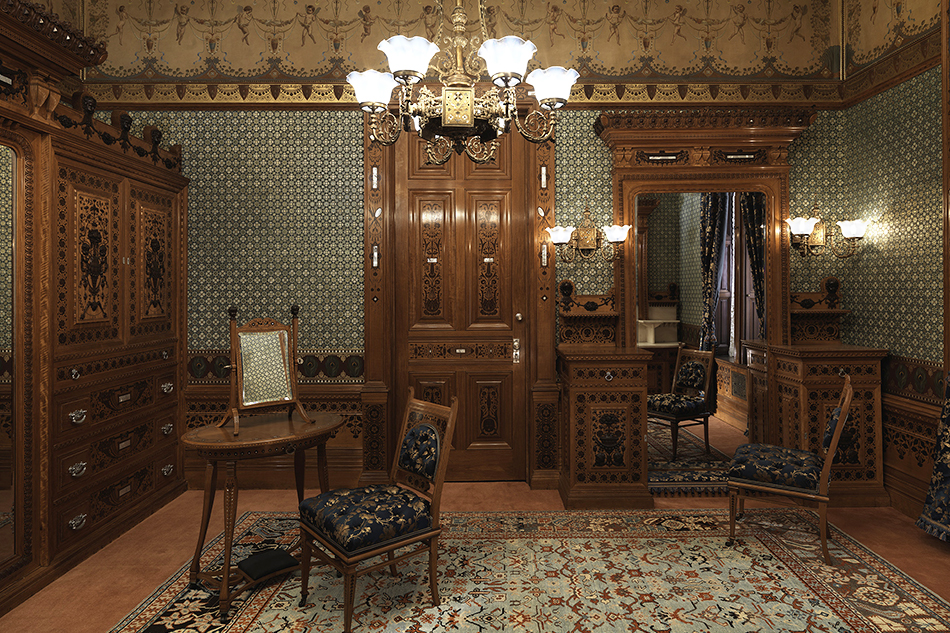 The dressing room reveals a luxurious layering of pattern, rich textiles, stained glass, metalwork and marquetry, with a Turkish carpet completing the scheme. 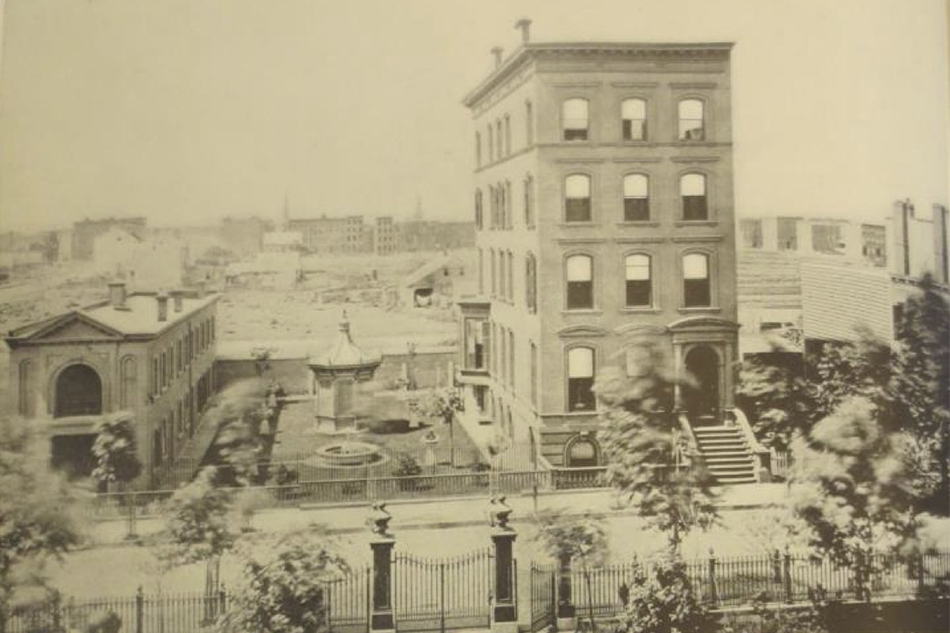 A photo taken around 1864 depicts the townhouse at 4 West 54th Street, which Worsham bought in 1877. Photo courtesy of the Rockefeller Archive Center 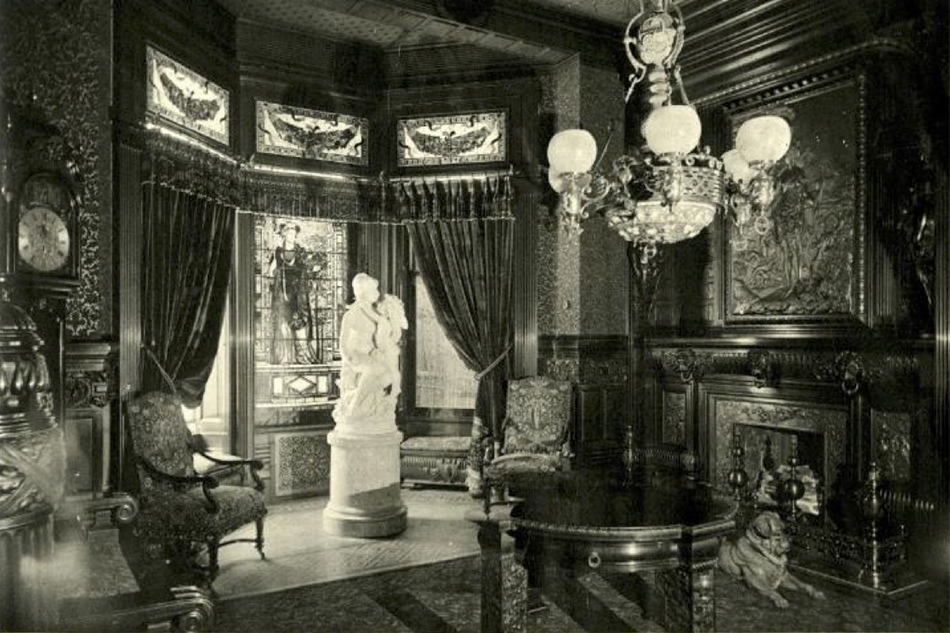 Schastey decorated the entry hall of the home, shown here around 1883, in splendor rivaling that of the dressing room. Photo courtesy of the Hispanic Society of America 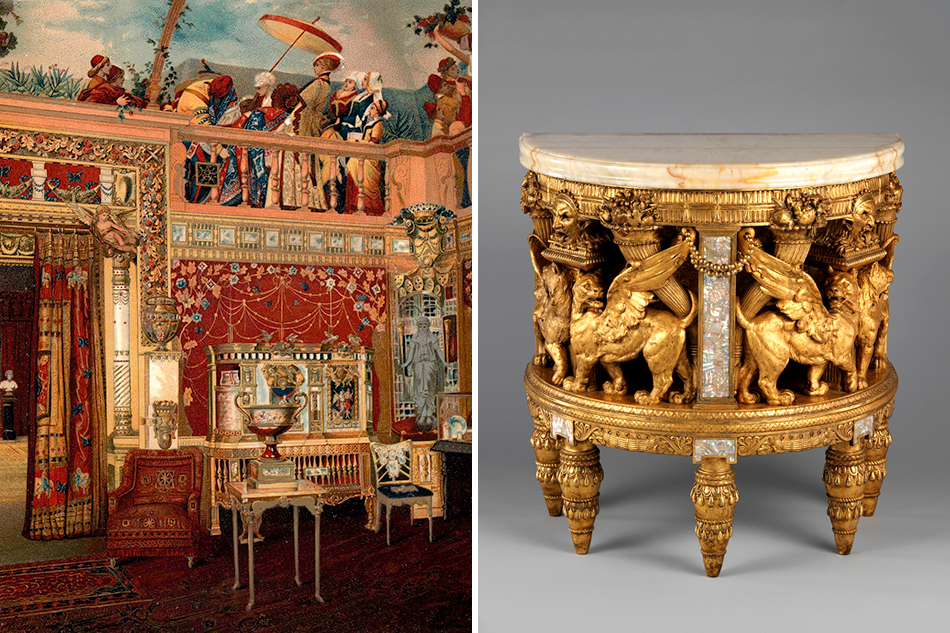 The Met exhibit also includes images and furnishings from a Gilded Age Manhattan mansion belonging to William H. Vanderbilt. Left: A chromolithograph of the drawing room from Mr. Vanderbilt’s House and Collection (1883–84), a four-volume publication produced by Vanderbilt to document the home’s interiors. Right: This giltwood drawing-room console was designed by the Herter Brothers and embellished with mother-of-pearl, abalone and Egyptian alabaster. 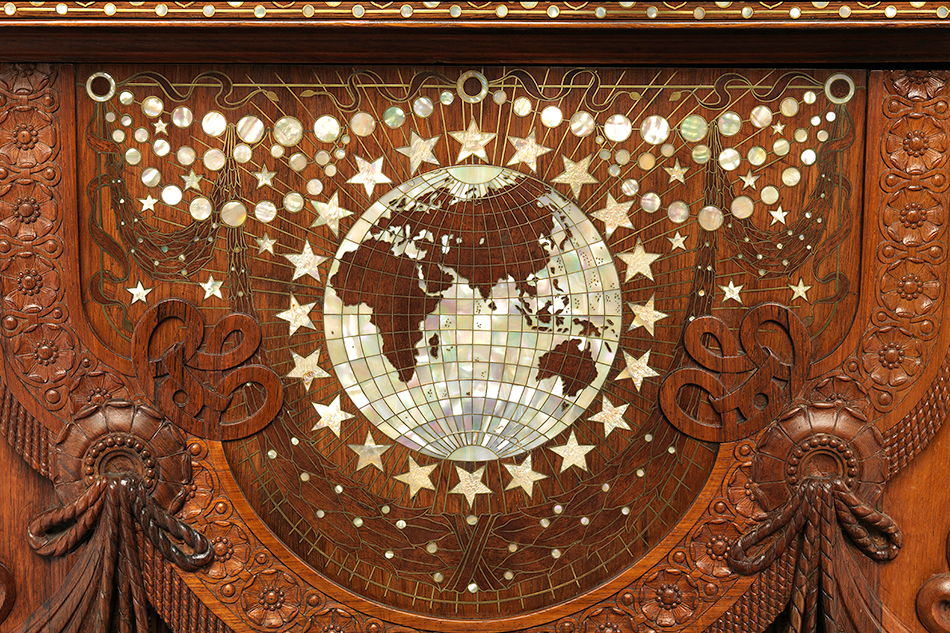 A detail of a Herter Brothers library table from the Vanderbilt house shows off a luxe mix of materials: rosewood, brass, mother-of-pearl and abalone. 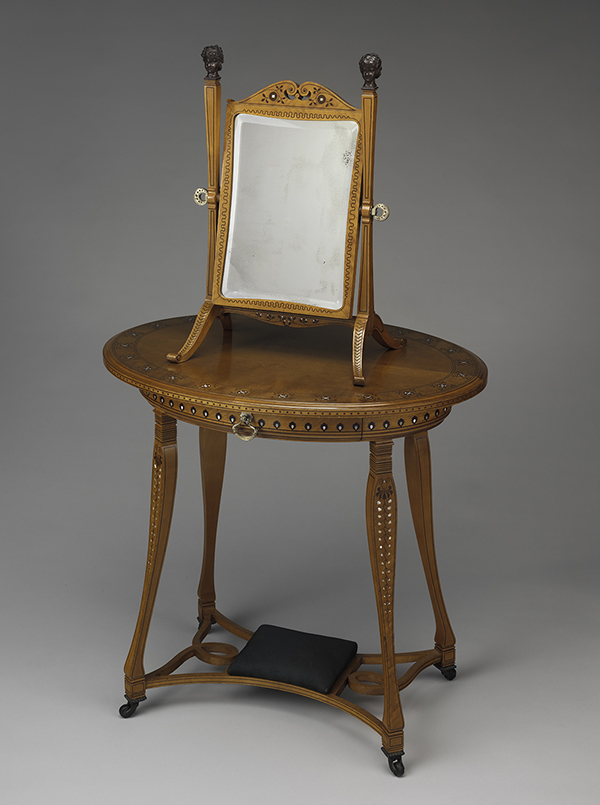 A mirror Schastey created for the dressing room, with mother-of-pearl and brass detailing, sits on a dressing table he designed, which still has its original upholstery.

These pieces hold their own next to comparably elaborate antiques in the gallery that the Herter Brothers made for the library of the William H. Vanderbilt house in New York, which was built nearby at precisely the same time as Worsham’s.

Schastey came to America with his family around 1849, when he about 10 years old. He apprenticed with other firms — New York at the time was filled with skilled émigré German cabinetmakers — served in the Civil War and then struck out on his own. Although based in New York, he worked on the San Francisco estates of Huntington’s Central Pacific Railroad partners, Charles Crocker, Leland Stanford and Mark Hopkins Jr., which perhaps led to Huntington hiring him for the 65 Park Avenue residence he shared with his first wife, Elizabeth Stoddard. All those interiors are lost to us, as are most of Schastey’s creations, which is why he is anything but a familiar name, even to specialist dealers.

“Works by Schastey are exceedingly rare on the market,” says David Petrovsky, a private dealer in Hudson, New York, who specializes in the Gilded Age period. David Scott Parker, co-owner of Associated Artists in Southport, Connecticut, who has been selling antiques of that period for years, notes that no one has focused on Schastey until now. “It’s very good quality work, but it’s normally not marked,” Parker says. “If I have seen his pieces, I haven’t known what they were. I’m sure there will be more interest with the Met show.” 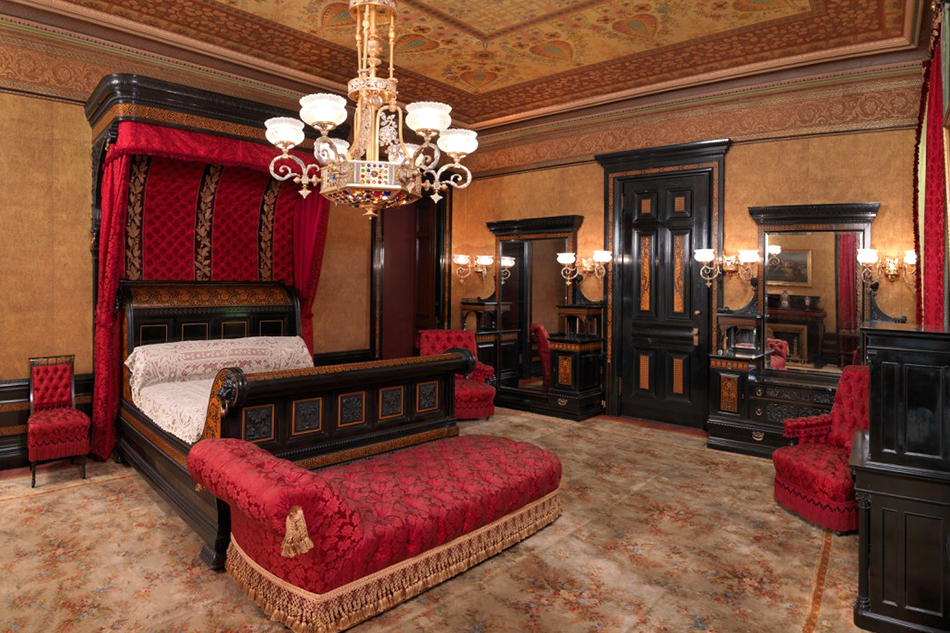 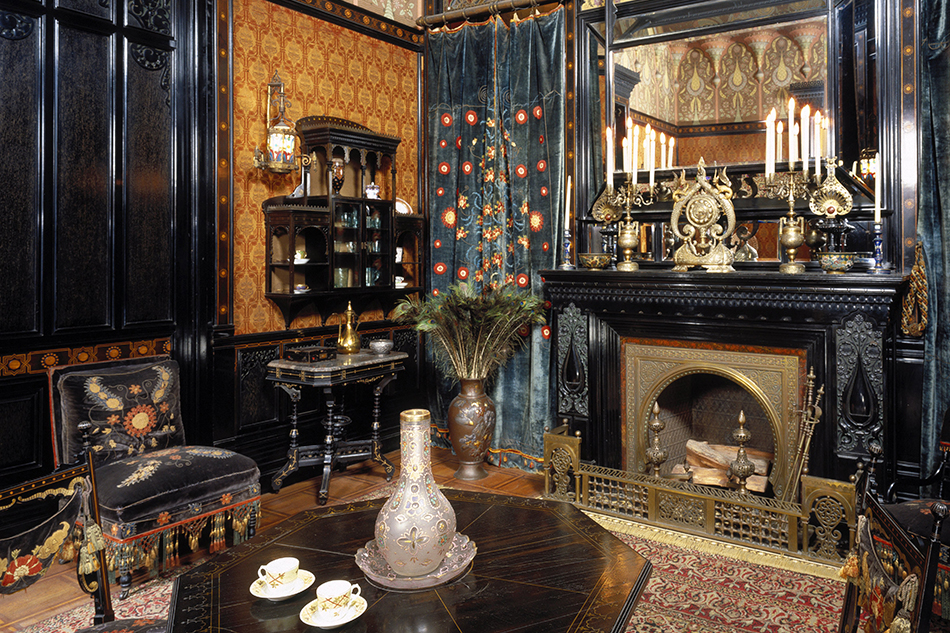 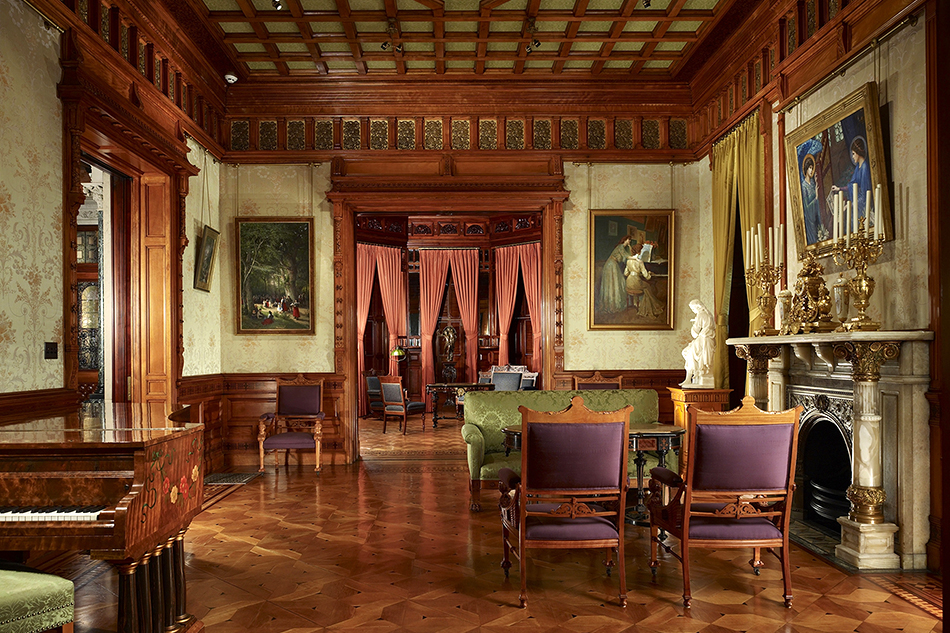 Drawing room decor in Chicago’s Driehaus Museum includes some of its original Schastey furnishings, including a set of Empire-style armchairs made especially for the room, two of which are included in the Met exhibition. Photo by Steve Hall of Hedrich Blessing, 2008, courtesy of the Driehaus Museum 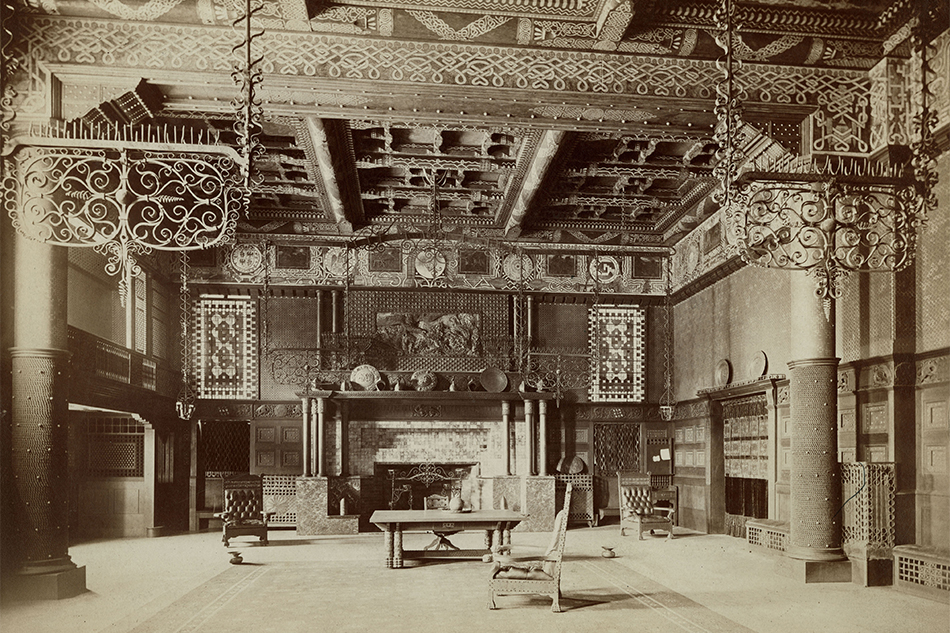 Another example of Aesthetic Movement decor now getting its due, the Louis C. Tiffany–design Veterans Room on the ground floor of New York’s Park Avenue Armory — seen here around the time of its debut in 1881 — will reopen next month. Photo courtesy of the Park Avenue Armory 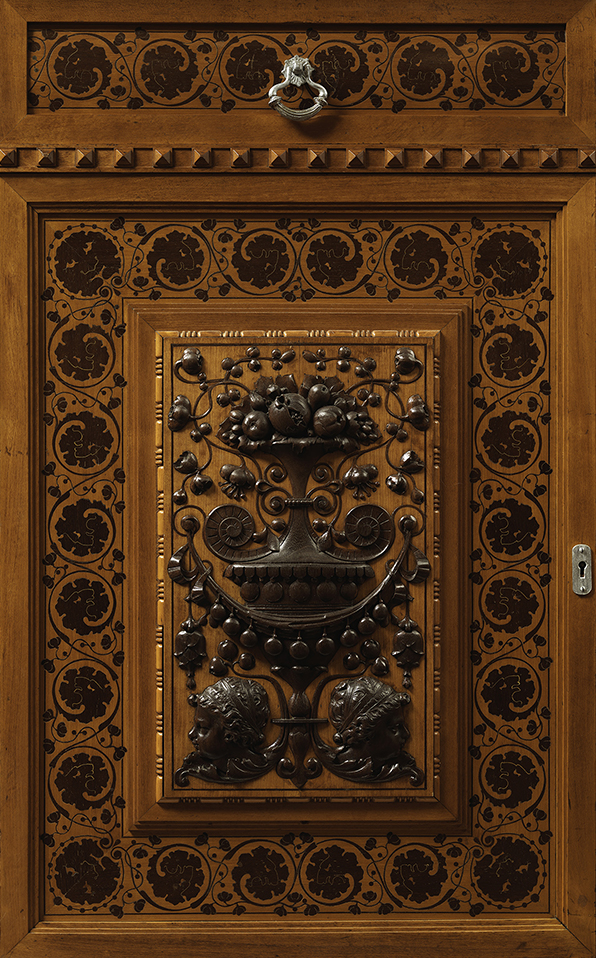 Detail of a full-length dressing glass cabinet in the Worsham-Rockefeller Dressing Room, designed and executed by George A. Schastey & Co.

The interior at the Met is called the Worsham-Rockefeller Dressing Room because Worsham sold her West 54th Street brownstone with everything in it to Standard Oil magnate John D. Rockefeller in 1884. (After Huntington’s first wife died, he married Worsham and subsequently built her a new house at Fifth Avenue and 57th Street, where Tiffany & Co. is now located.) Surprisingly for a strict Baptist — and happily for us today — Rockefeller kept the ornate interiors virtually intact.

After Rockefeller’s death in 1937, the family donated the dressing room to the Museum of the City of New York, which was unable to display it and so gave it to the Met in 2009. (The townhouse itself was torn down in 1938.) Worsham’s exquisitely ornate bedroom, meanwhile, ended up in her hometown of Richmond at the Virginia Museum of Fine Arts, where it was unveiled in 2010. The Rockefellers donated her “Moorish” reception room — a fantastic amalgam of exotic Near Eastern, Asian and Indian motifs — to the Brooklyn Museum, where it remains. A delicate octagonal japanned center table from Brooklyn is included in “Artistic Furniture.”

The exhibition also shows off chairs Schastey designed for Chicago’s Nickerson House, where he collaborated on the interiors, and which for the past several years has operated as the Driehaus Museum, opening one of the city’s great period gems to the public. But it’s in New York where the Aesthetic Movement and Gilded Age seem to really be having a moment these days. In addition to the Met’s dressing room, the newly restored Veterans Room, a triumphant confection by Louis C. Tiffany, will reopen next month at the Park Avenue Armory.

Huntington died in 1900, leaving Worsham a widow — and the richest woman in America. She was never accepted into New York society, but she didn’t seem to care. She moved to San Marino, California, with her nephew, and together they built the Huntington Library, one of the greatest American repositories of rare books and great paintings, surrounded by formal gardens.

Schastey, for his part, died in 1894, the year after a fire destroyed his New York workshop on West 41st Street. Now, thanks to Frelinghuysen’s detective work, he is being rediscovered and given a much-deserved moment of fame. 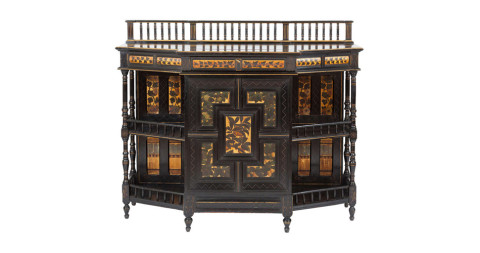 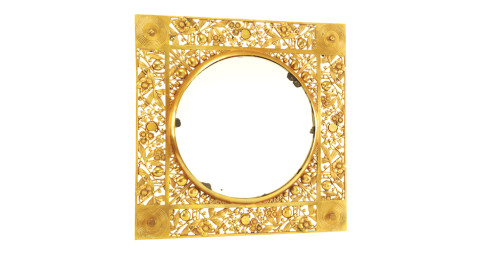 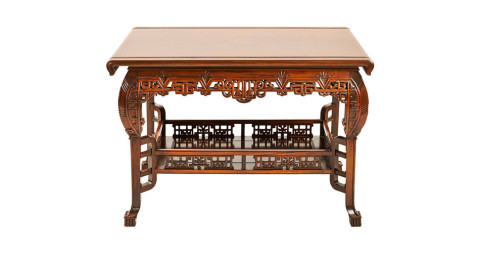 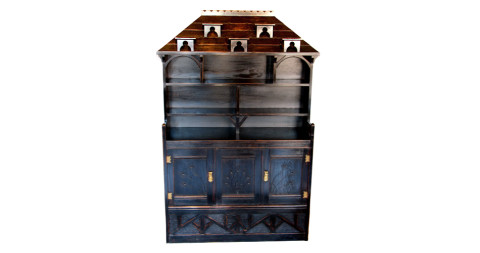 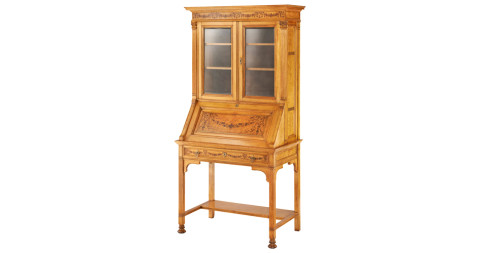 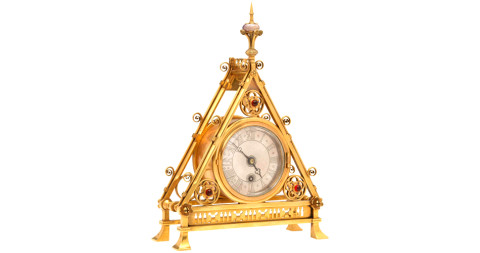 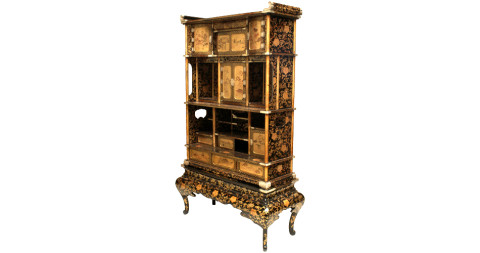