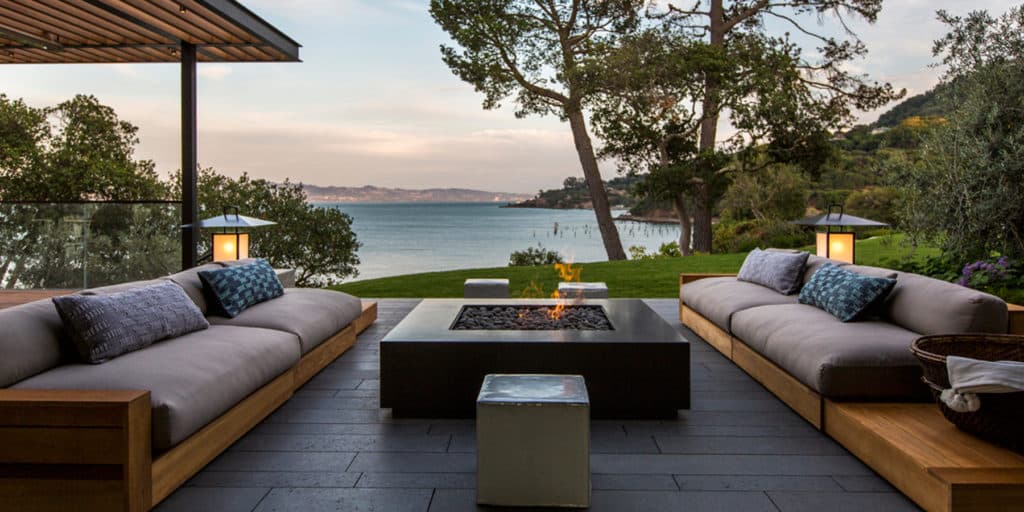 The interior designer and the architect teamed up on a warm, contemporary Bay Area home that's in tune with its surroundings. 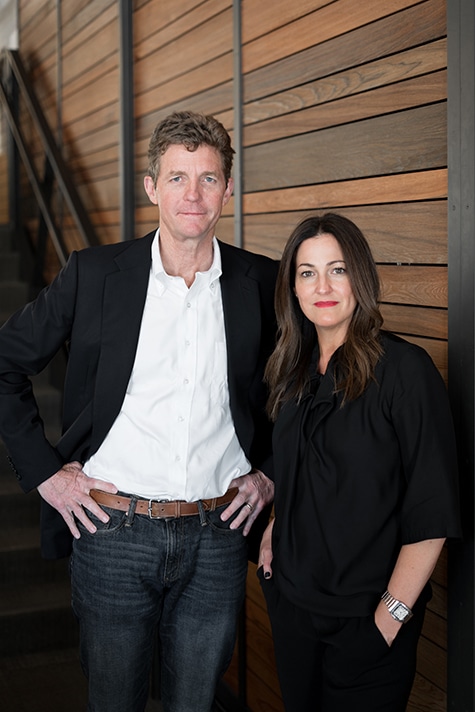 May 8, 2017Nicole Hollis worked with architect Brooks Walker to design a contemporary home in California’s Marin Country that could accommodate a couple and their teenage son, as well as in-laws (portrait by Josephine Liu, Nicole Hollis). Top: The outdoor lounge area features a fire pit flanked by a pair of teak sofas by James Perse and outdoor lanterns by Kevin Reilly. All photos by Laure Joliet, courtesy of Nicole Hollis, unless otherwise noted

Some 10 years ago, a couple who had been working in finance in Hong Kong returned home to California’s Bay Area with the intention of building a house in Tiburon on a hillside that sloped down to the Pacific. They had discovered this special property, with its picturesque wind-gnarled trees and spectacular bay views, several years before, when they spent a summer renting the mid-century ranch house that occupied it.

Returning every summer thereafter, the husband and wife became well acquainted with the grounds and its particularities and decided to buy the land, tear down their summer rental and build a contemporary house that harmonized with the landscape while expertly framing its vistas and verdure.

To conceive the house, they chose Brooks Walker of Walker Warner Architects, a firm renowned for integrating buildings with their surroundings, and Nicole Hollis, a designer much sought after for her elemental interiors enriched with an understated use of luxe materials and bespoke artisanal furnishings.

Although the two were both based in San Francisco, they were unacquainted with each other. But they soon developed a rapport, thanks to their shared aesthetic, and worked easily together, developing the exterior and interior of the house as a unified whole.

Indeed, one of the home’s key architectural elements, a bronze screen by the sculptor Michele Oka Doner that divides the formal living and dining areas, was proposed by Hollis. Weighing two tons, it needed to be assembled on-site, before the building’s frame was finished to secure its foundation.

If the natural beauty of the property made this project especially intriguing for Walker and Hollis, so too did its unusual multigenerational program. In addition to the husband and wife, there was a teenage son to be considered, as well as parents and in-laws, so the home includes rooms for extended family and grandparents.

Enthusiastic entertainers, the clients also wanted a house that would welcome an abundance of guests to parties that could flow out to the pool without disturbing everyone else’s privacy. Finally, they required designers who could sensitively place their impressive collection of contemporary Asian art.

The couple calls their new home “Paradise.” Herewith, Walker and Hollis, who now often work as a team, share with Introspective how they designed a house that earned this special designation.

The home’s exterior is a combination of vertical red cedar and horizontal zinc siding panels, with doors and windows that have dark bronze anodized aluminum frames. The flooring is honed Basaltina stone. Landscaping is by Todd R. Cole, of Strata Landscape Architecture, and SCDA.

“One of the key starting points in our design conversations with the clients was determining what ‘modern’ meant to them,” says Hollis. Walker notes that “in terms of the architecture, Frank Lloyd Wright served as an immediate touchstone. I then introduced them to the mid-century Californian architects William Wurster and Cliff May, who were masters at creating simple, informal houses with flowing spaces that blend with their surroundings.

“In this case, figuring out the roof became a crucial part of the design, since the house is situated halfway down the hillside, so you look down on the roof in your approach. We utilized a shallow zinc-clad hip roof to articulate the main building masses. The roof’s deep eaves give the house an embracing feel.”

Inside, Hollis adds, the husband and wife desired a warm modernism: “Warmth and livability came through our choice of materials, especially those with a high-touch factor, and custom-made furnishings, especially lighting fixtures.” 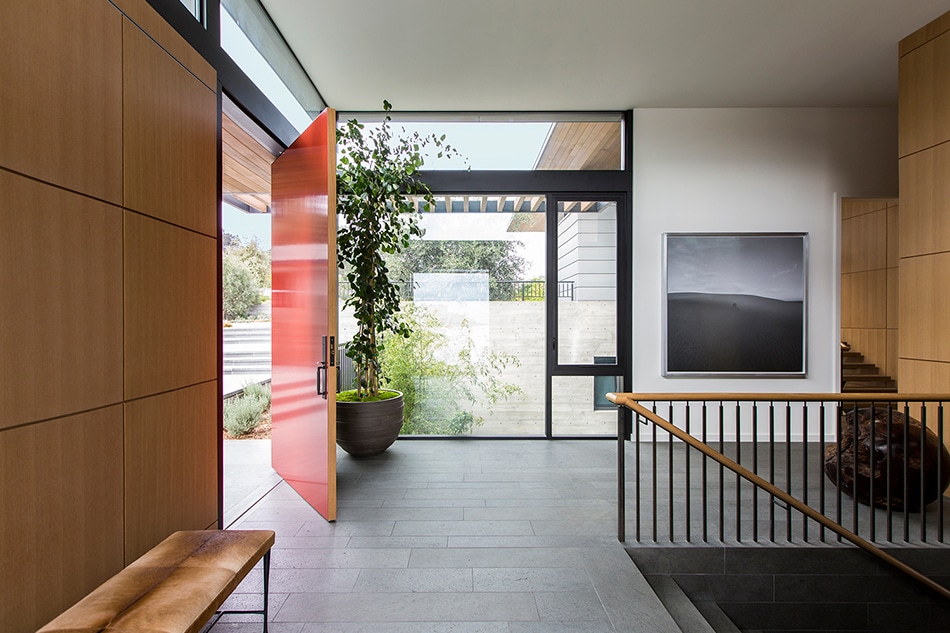 The entryway features a photograph by Richard Misrach as well as a bronze bench with hair-on-hide upholstery by Christian Liaigre and a walnut root sculpture by Keith Holamon. The walls are rift-sawn European white-oak paneling and Aegean limestone, and the floors are honed Basaltina stone. The front door is painted in Rouge Chinois n28 from Emery Et Cie in Paris.

“The house actually has two entries,” says Walker. “There’s one at the top of the hill, so the couple can depart in the morning from their top-floor bedroom suite, and there’s the formal entry halfway down the hillside, where the auto court is located.”

According to Hollis, one of the earliest decisions, which helped harmonize inside and out, was specifying the same Aegean limestone for the interior walls and outdoor paving and surrounds, with different finishes according to use. Generously proportioned white-oak square panels on the walls and fumed-oak planks on the floor add to the home’s serene, natural feel, as does Christian Liaigre’s simple bronze bench with hair-on-hide upholstery. 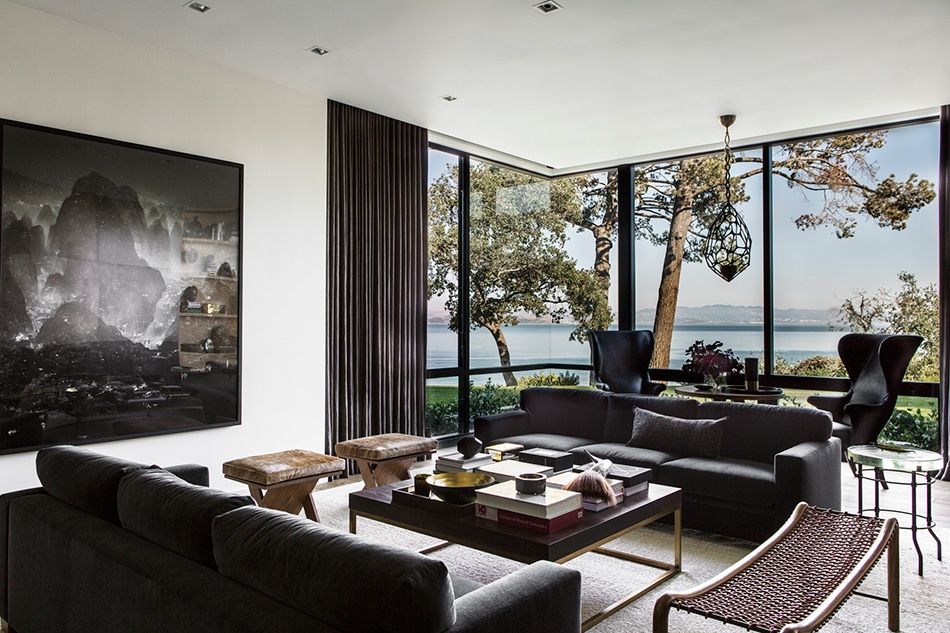 “While the furniture in the living room is quite elegant — the tailored sofas are Jean-Michel Frank reproductions upholstered in a dark gray mohair — the irregular bronze web of Hervé Van der Straeten’s pendant lamp adds an element of captivating imperfection,” says Hollis. The cleverly placed lamp almost appears to be a hornet’s nest hanging from the tree outside. Originally, the wife did not want curtains, but Hollis encouraged her to accept very simple gray-brown linen draperies that descend like columns from an inner recess in the ceiling, specially designed by Walker. 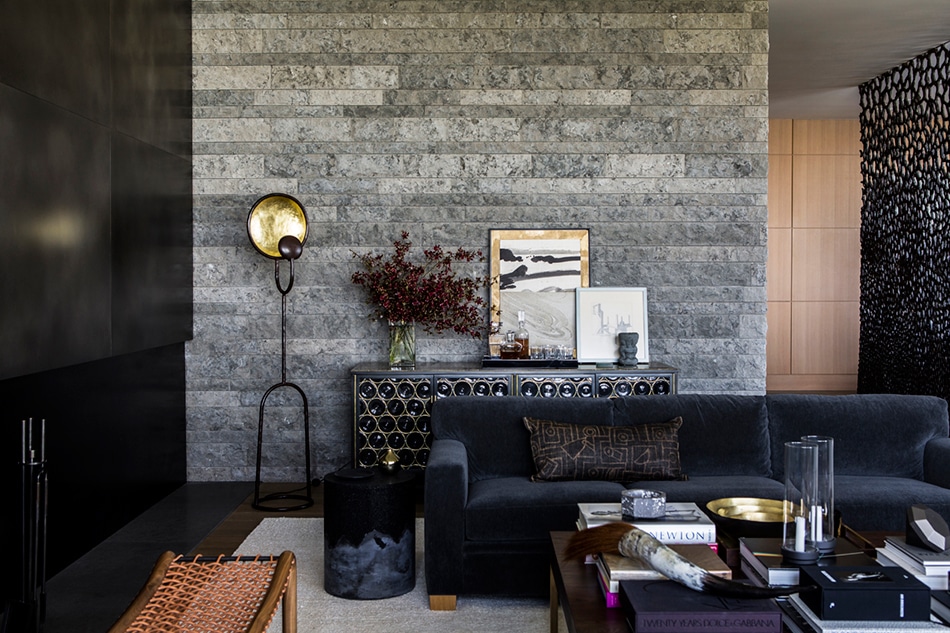 A set of decanters and glassware sits atop the John Pomp credenza in the living room. The hide-covered stool is by Michael Boyd.

The clients don’t drink, but they often entertain guests who do, so Hollis chose a John Pomp credenza, crafted from antique brass and blackened steel and punctuated with crystal rondels, to serve as a discreet bar. Vincent Collin, a master French metalsmith, crafted the wrought-iron torchiere with gilded reflector, which enhances the room’s ambience of organic modernism, as does the gracefully carved William Emmerson teakwood bench and Michele Oka Doner’s bronze screen, visible at the far right. 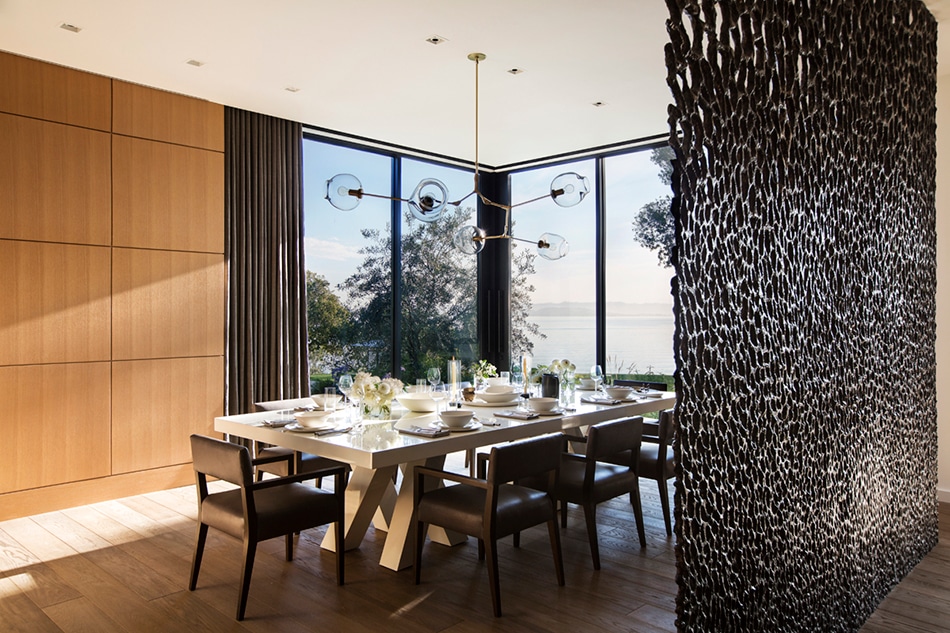 “Originally, the couple wanted two dining tables in this room — or a single large table that could be pulled apart. That way, one could be used for dim sum service when guests came over. But the proportions just weren’t working,” says Hollis. “We custom designed the table to suit the tight proportions of the room. White automotive paint gives it a shiny lacquer finish. What’s great about Michele Oka Doner’s screen is that it bounds the space without closing it in. It’s especially powerful at night, when it casts shadow patterns on the floor and walls. We needed a very clean chandelier to go with these strong designs, which is why we commissioned this piece by Lindsey Adelman.” 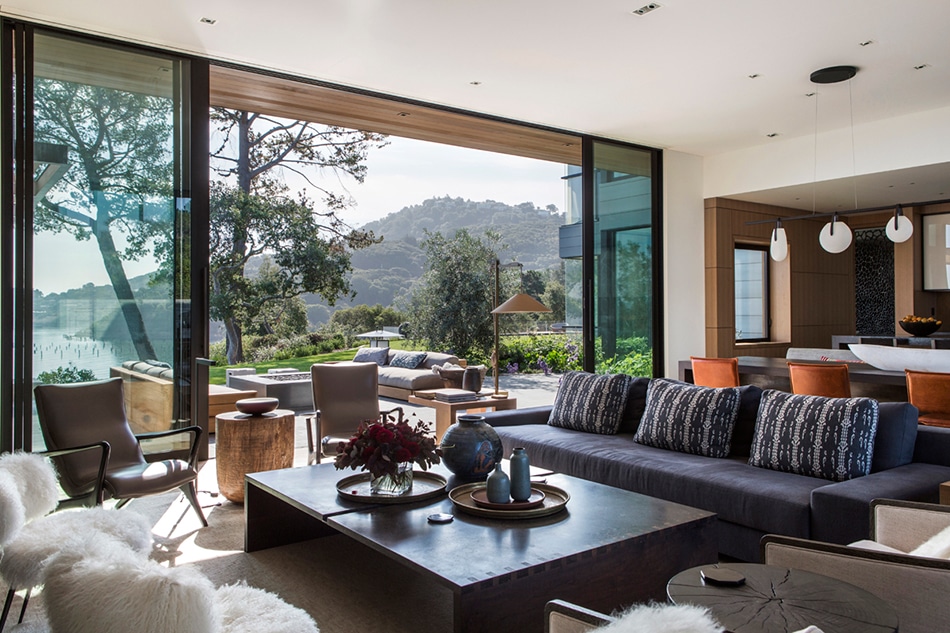 The great room, which features a wall of sliding glass panels that open to the outdoor lounge area, includes a navy linen sofa by Christian Liaigre and a Belgian bluestone and walnut coffee table by Nicole Hollis. The space also contains a pair of white flokati chairs upholstered in Mongolian fur and two leather armchairs by Vladimir Kagan.

“This room flows into the family dining area and kitchen as well as out onto the patio,” Hollis explains. “You can slide open the doors, as you see here, so gatherings can naturally spill outside if the weather permits. The scale and shapes of the seating create a seamless transition between indoors and out.” 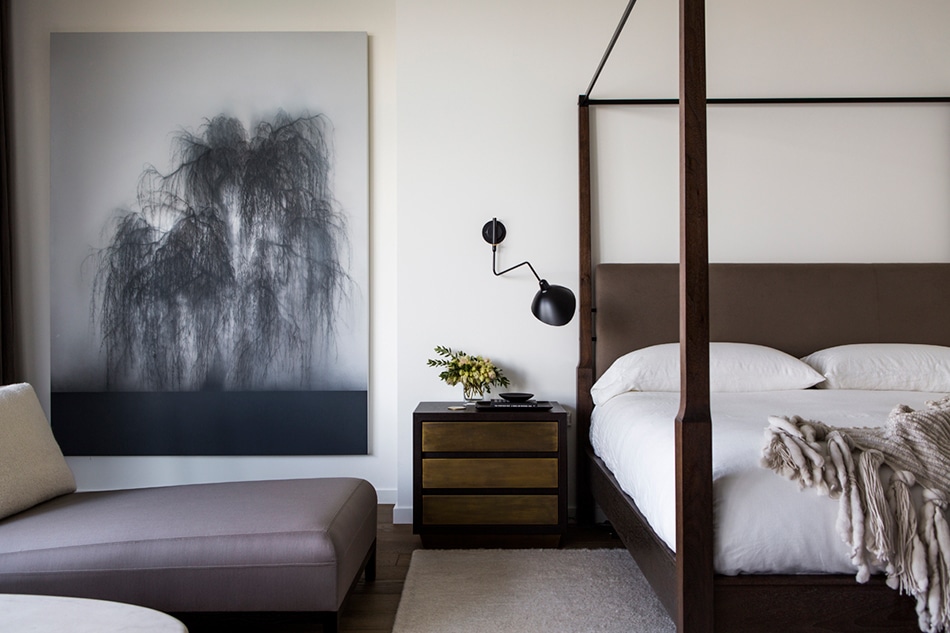 In the master bedroom, a walnut four-poster canopy bed by Holly Hunt is paired with a brass and leather nightstand by Nicole Hollis. The painting No Air, No Distance by Ki-bong Rhee hangs beside a chaise longue by Christian Liaigre.

“After we chose this elegant four-poster bed, we had a hard time finding the right nightstands. So, finally, we designed these ourselves,” says Hollis. “They’re leather-wrapped with brass-front panels. The reading lights are by Serge Mouille, and that beautiful canvas is No air, No distance [2010] by Ki-bong Rhee. It’s acrylic, Plexiglas and mixed media on canvas.” 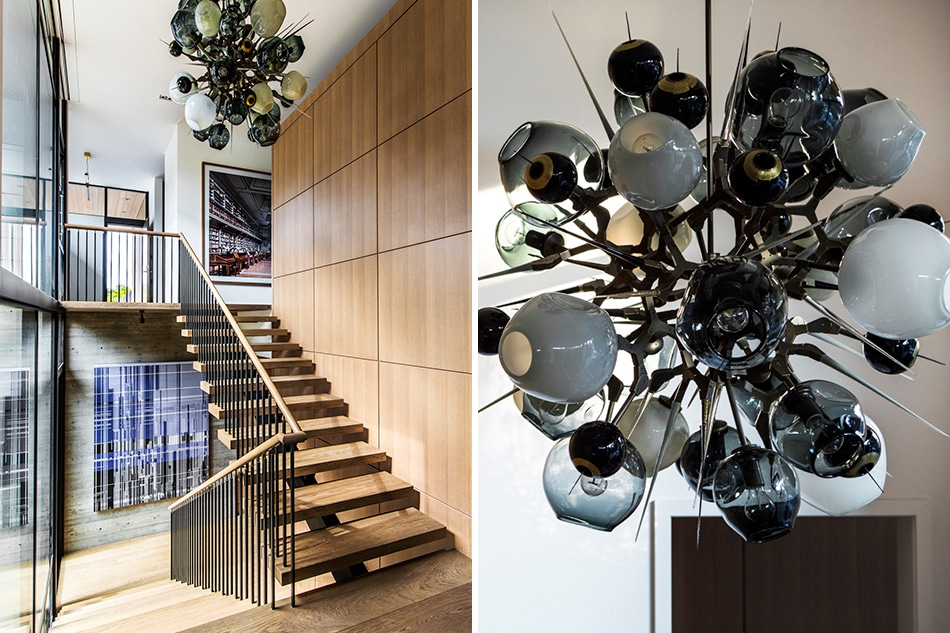 Left: A Boom Boom Burst chandelier by Lindsey Adelman hangs above the staircase. A photograph by Candida Höfer and a painting by Liu Wei are displayed on the walls. Right: A detail of the chandelier, which includes hand-blown glass bulbs and spikes

“This is the stairwell that leads up to the bedroom and bath suite of the couple and to their son’s room. Downstairs are the public spaces, including a formal dining room and great room,” says Hollis. “Note the textured surface of the board-form concrete wall. There’s an oil-on-canvas work by Liu Wei hanging on it and a photograph by Candida Höfer on the wall upstairs, but I think it’s Lindsey Adelman’s custom-made chandelier with glass globes and white glass spikes that makes the space.”

Watch a Video Tour of the Tiburon “Paradise” House