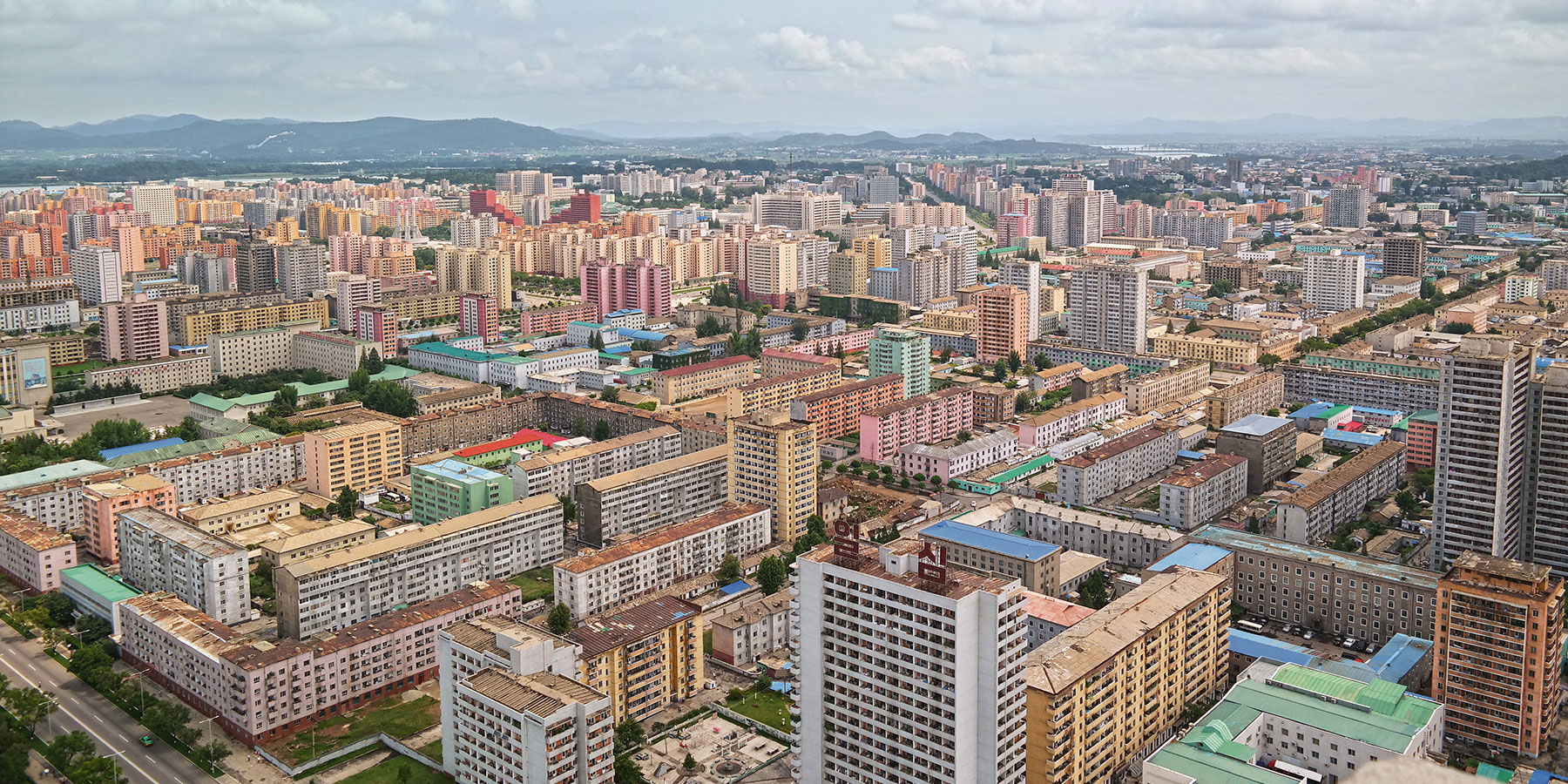 The Side of North Korea That’s Not Been Making Headlines

The architecture and color palette of the Hermit Kingdom aren't what you might expect. 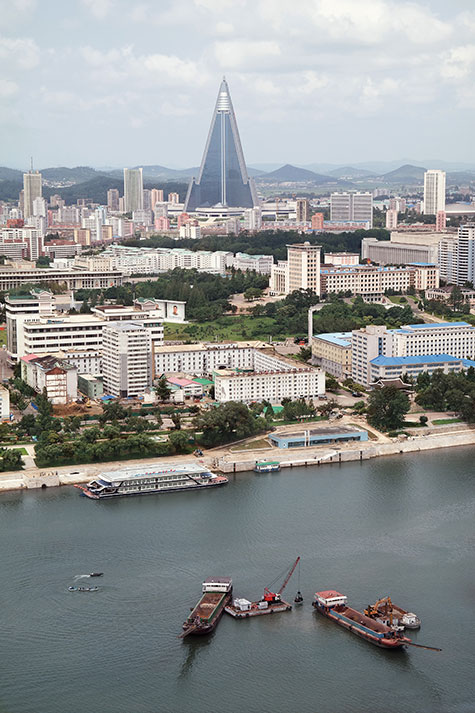 Construction on the pyramid-shaped Ryugyong Hotel — intended to contain 3,000 guest rooms and five revolving restaurants — began in 1987, but it remains unopened. Top: The pastel-colored expanse of Pyongyang is visible from the top of the Tower of the Juche Idea. All photos © Oliver Wainwright

When Oliver Wainwright, the London-based architecture critic of the Guardian newspaper, heard that the capital of North Korea looked like no place else on earth, he decided to see for himself. What Wainwright found, during a weeklong trip in the summer of 2015, is that Pyongyang “isn’t the monotonous grey that you might expect it to be.” Indeed, as he writes in his new book, from the observation deck of the 500-foot-high Tower of the Juche Idea, built to mark Kim Il-sung’s 70th birthday in 1982, Pyongyang “stretches out beneath you as a pastel-colored panorama.” With its tower blocks of salmon and teal, pink and baby blue, he adds, it “looks as if someone has emptied a packet of candy across the city.”

Inside North Korea (Taschen) will make you realize how little you know about the Hermit Kingdom — or, at least, how little you know about how the Hermit Kingdom looks. A deft writer, Wainwright here reveals himself to be a skilled photographer as well, aided by the surreal scenes he encountered in Pyongyang and beyond. His subjects included the murals of the country’s leaders that adorn seemingly every building. Wainwright quotes Kim Jong Il’s 1991 directive, written three years before he became the country’s Eternal Leader, that  “architectural space must be composed to ensure that the leader’s image dominates all the elements of the space. This will help people to look up at the leader’s image at all times and inspire them with the pride and consciousness that they are happy in the leader’s embrace.”

Pyongyang was destroyed in the Korean war. Rebuilding, beginning in 1953, followed the country’s ideology of self-reliance, juche, which entails avoiding outside influences as much as possible. “An architect who is convinced that his country and his things are the best will not look upon foreign things or try to copy them,” Kim Jong Il wrote in the 1991 treatise. In describing the look he wanted, he used a word not normally associated with North Korea: cozy.

Thanks to Pyongyang’s unusual pastel palette, Wainwright’s book has a powerful aesthetic. But it delves beneath the surface, explaining the connections between form and the regime’s political preoccupations. The city was designed with wide boulevards for military parades and — should it come to that — military maneuvers. Perhaps more importantly, Wainwright writes, “[t]he perspectival effects of marching colonnades of columns and the flanking wings of symmetrical monuments are consistently used to amplify the significance of whatever lies at the end of the grand axis — usually a statue of one of the leaders — and consequentially diminish the status of the individual.” Walking the city, he notes, he “felt very small indeed.”

As for individual buildings, there are attempts to impress, exemplified by oddities like the 105-story pyramidal Ryugyong Hotel, begun in 1987 but still unopened. (Long a concrete carcass, it was clad in mirrored glass in 2012 as part of a deal with an Egyptian telecom company.) And there are efforts to compete on an international stage, as in the world-class athletic facilities built for the 13th World Festival of Youth and Students in 1989. Each a different pastel hue, these include “a weightlifting gymnasium shaped like a pair of dumb-bells and a badminton hall whose barrel-vaulted roof is modelled on the arc of a flying shuttlecock,” Wainwright writes, going on to observe that the buildings’ interiors are equally surprising: “Their pre-school color palettes and axial symmetry [give] the surreal feeling of walking into a Wes Anderson film set.” 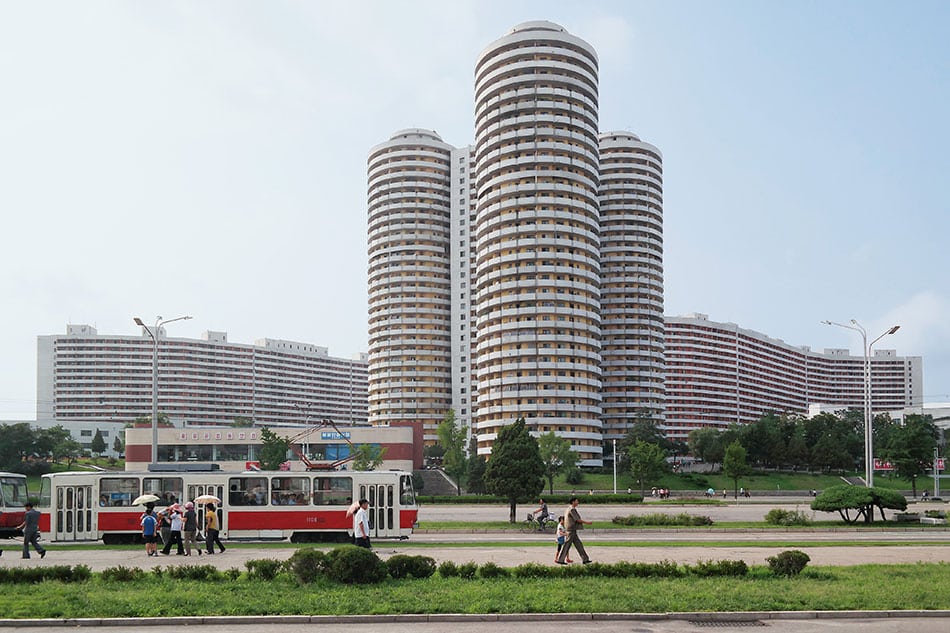 Some members of the Pyongyang elite, including party officials and scientists, reside in cylindrical apartment buildings along Kwangbok Street, a ceremonial boulevard built for the 1989 World Festival of Youth and Students. 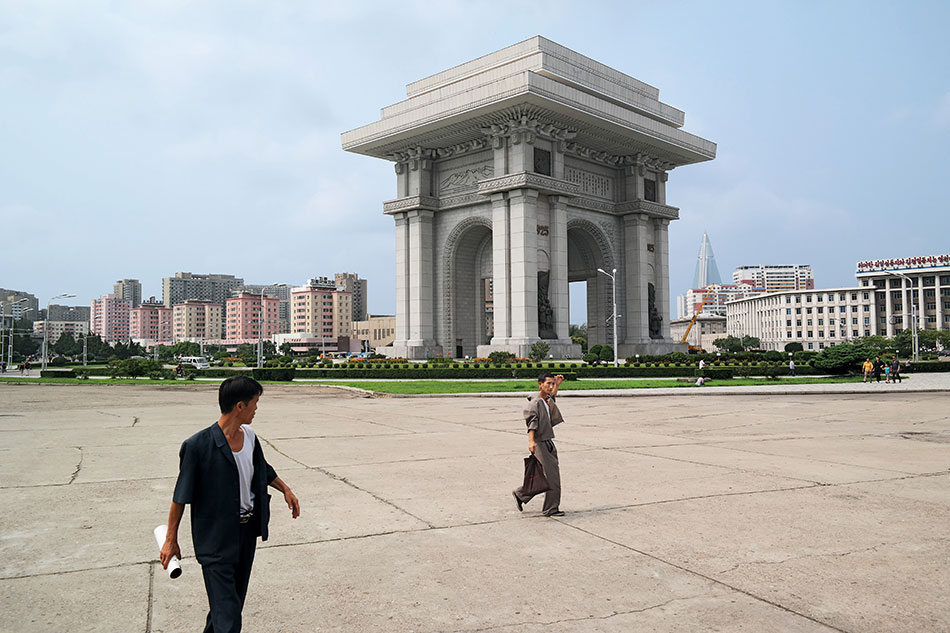 The Arch of Triumph, inspired by the similarly named Paris landmark, is built from 25,550 blocks of white granite, representing the number of days of Kim Il Sung’s life on his 70th birthday in 1982, when the structure was unveiled. 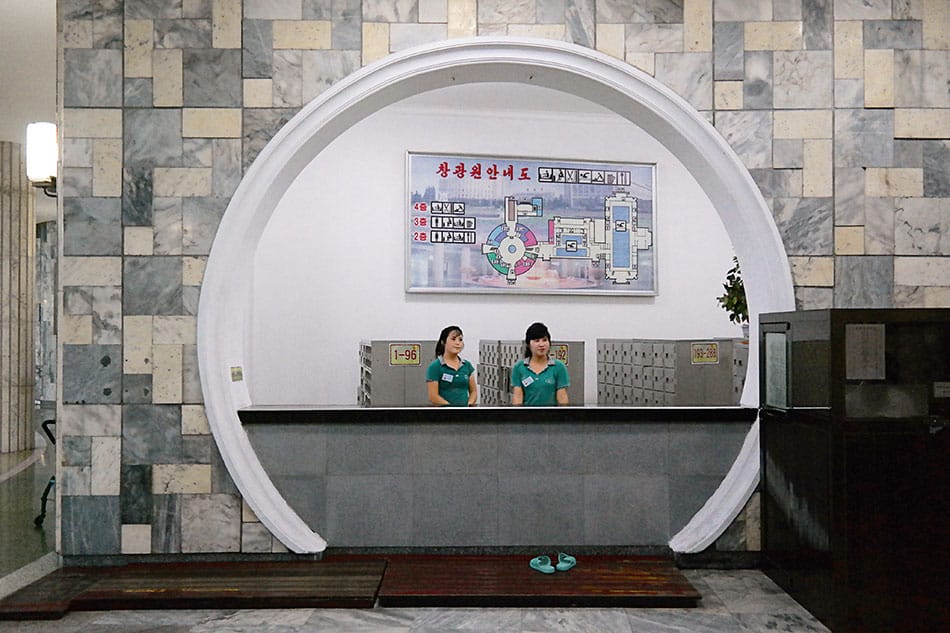 The Changgwang Health and Recreation Complex was Pyongyang’s flagship fitness center when it opened, in 1980. 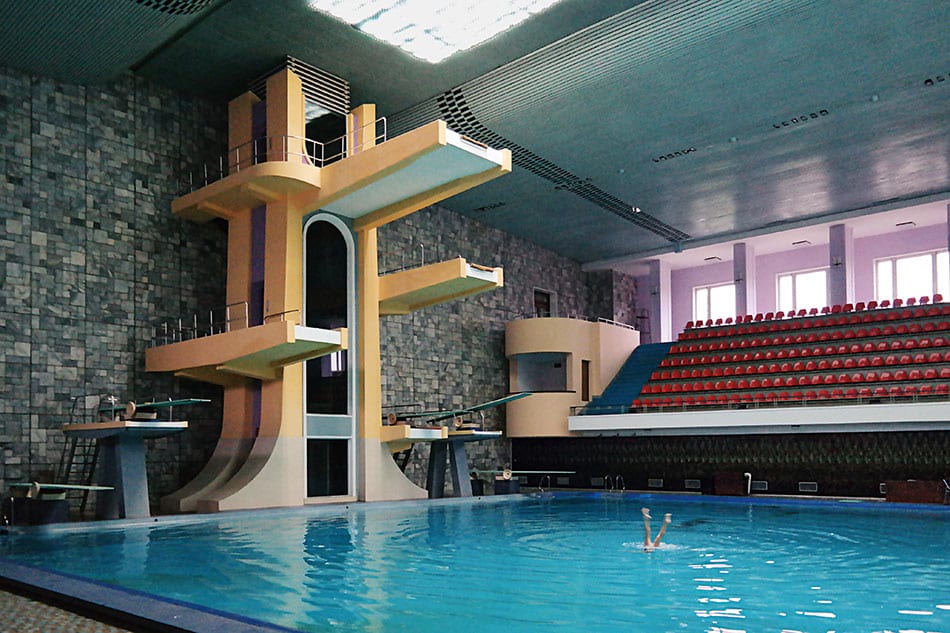 The more than 130,000-square-foot health center contains swimming pools, a sauna and a bathhouse. At the pool, the diving boards are reached via a mechanical elevator in a shaft faced with smoked glass. 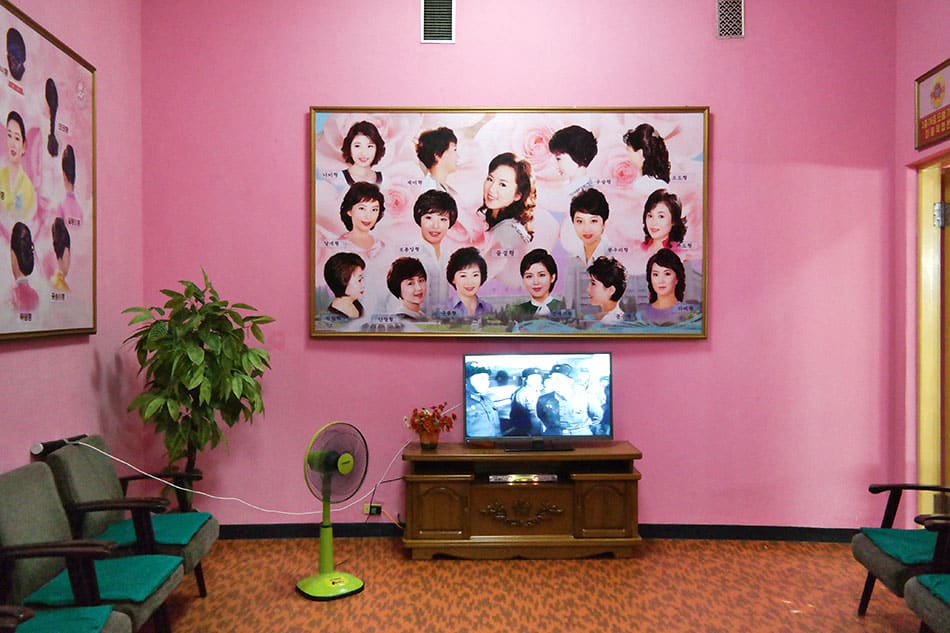 This room at the health center displays Pyongyang’s candy-colored aesthetic. 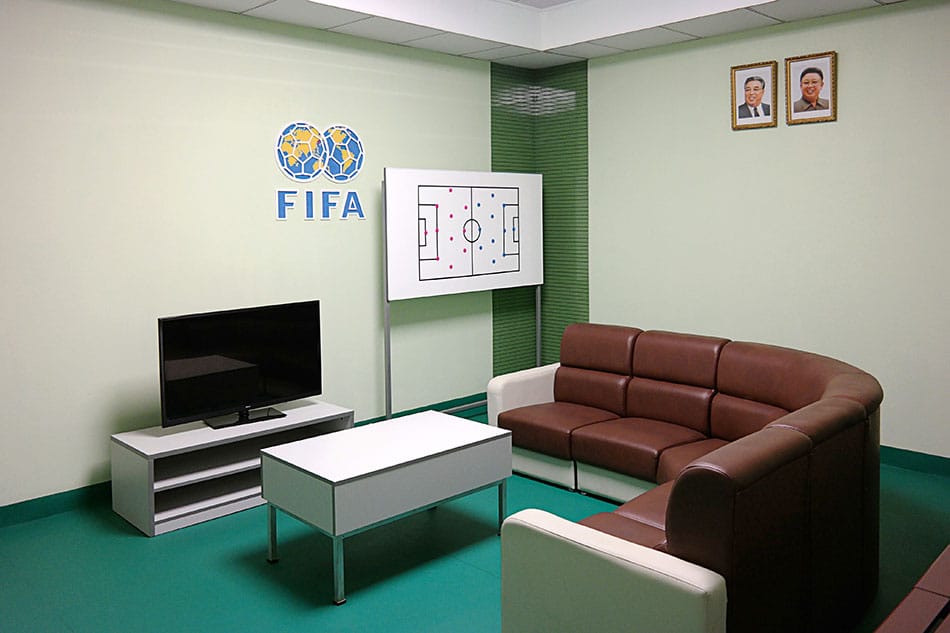 Built in 1989, the Rungrado May Day Stadium was renovated and reopened in 2015 with a new football pitch and running track. The updated support rooms (seen here) “embody the essence of the current North Korean interior aesthetic, with their complementary color schemes and synthetic, wipe-clean surfaces,” Wainwright writes in Inside North Korea. 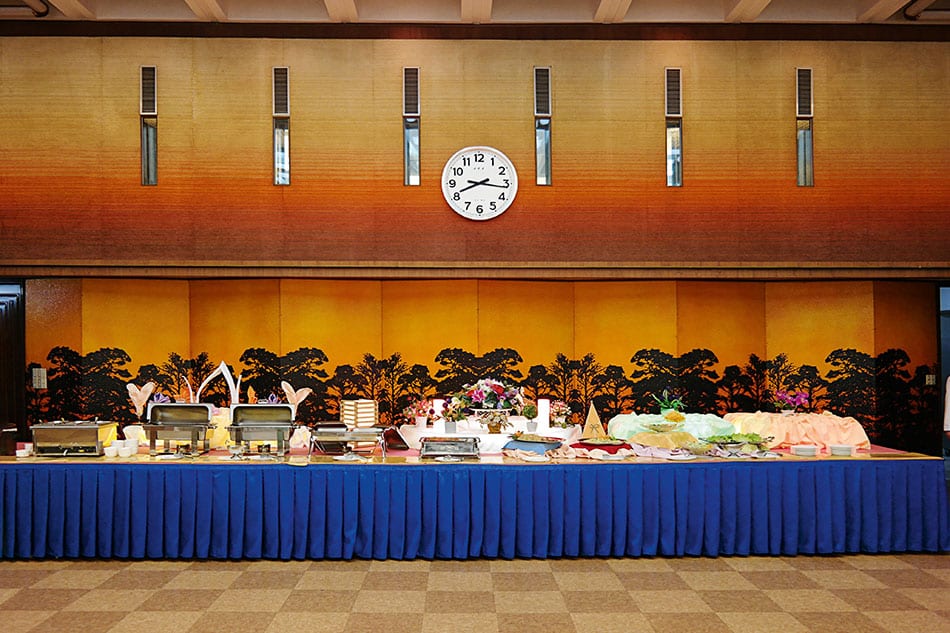 The 500-room Koryo Hotel, which was built in 1985 as the main property catering to visiting foreigners, comprises twin 45-story towers connected by a bridge. Both are topped with revolving restaurants, one of which is off limits because it overlooks a residential area of the Pyongyang elite.

Many newer buildings contain housing meant to keep the elite happy. “When the 18 cylindrical apartment towers of Changjon Street sprouted in 2012, rising up to 47 storeys on the banks of the Taedong River,” Wainwright reports, people “generally assumed the project was a one-off publicity stunt, designed to court international attention with shiny facades of prosperity.” Yet, he notes, “the high-rise wave has continued. Kim Jong Un has inaugurated a brand-new apartment complex almost every year.” Pyongyang is in the midst of a building boom, as the Supreme Leader promises to turn it into a “socialist fairyland.” In fact, Wainwright observes, Kim is “conjuring a flimsy fantasy of prosperity and using architecture as a powerful anesthetic, numbing the population from the stark reality of his authoritarian regime.” (Wainwright also notes that much of the country is, if not squalid, far less developed than Pyongyang.)

Wainwright’s visit to Pyongyang and Kaesong, near the South Korean border, was organized by Koryo Tours, a Beijing-based company that has led groups into North Korea since the 1990s. The 10 tourists — including, he writes, “a young Mormon from Utah, a Californian globetrotter in her 70s, a Brazilian anthropologist fresh from the Amazon jungle, and a pair of Italian architects” — were accompanied by three official guides who “would dutifully recite the statistics of each building on our itinerary: the total square meterage and visitor capacity of the building in question, along with the astonishingly short time in which the structure was built. But the most important statistic was how many times the leaders had visited the site, a fact of almost sacred significance, always inscribed in a hallowed red and gold plaque above the building’s entrance.”

As to who designed the buildings, Wainwright told Introspective, “No names of architects were ever mentioned, but we did get to visit the Paektusan Academy of Architecture, the main state architecture office, where prestige projects are designed, and we met one of the architects of the new airport. All projects are presented as a collective effort, designed under the close guidance of the leader.” 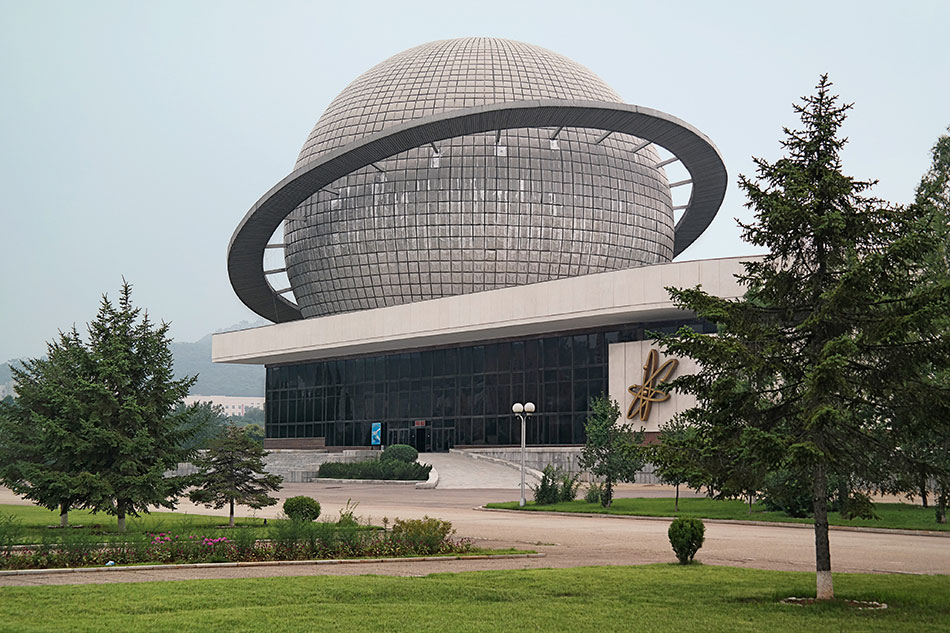 This planetarium is part of the Three Revolutions Exhibition park, a grand expo campus built in 1992 to showcase North Korea’s ideological, technological and cultural achievements in fields ranging from heavy industry and mining to agriculture and electronics.

Wainwright carried a Samsung NX30, a mirrorless compact system camera that he describes as “handy for the trip, as we were always on the go.”

The group was “briefed in advance about the rules on photography: No military sites, no construction sites, and if you take a shot of any statues or portraits of the leaders, they can’t be cropped. But apart from that,” he writes, “we were given more free rein than I was expecting. I was never stopped from taking a picture.”

Nevertheless, Wainwright was conscious of strictures, by which he felt bound even after leaving the country. His North Korean handlers remained behind, and “I was obviously keen not to put them in danger,” he told Introspective, explaining that while “nothing was enforced or censored, the safety of the local guides could have been severely compromised if we had cropped off one of the images of the leaders, or placed them in the gutter of the book.”

Wainwright worked with Taschen, and particularly its Los Angeles–based art director, Andy Disl, to make sure those things didn’t happen. But little if anything was compromised. Indeed, seeing the leaders and their buildings, in uncropped photos across largish, 8.3-by-10.8 inch pages, lets us imagine North Korea as North Koreans see it. Wainwright’s book is a revelation. 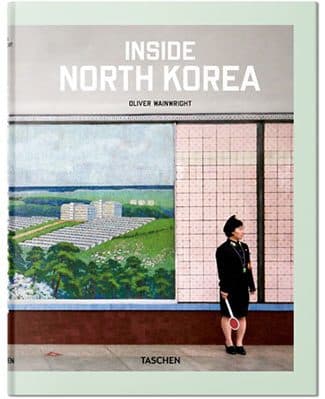