For Oliver Lee Jackson, Painting Is a Fierce and Sacred Matter 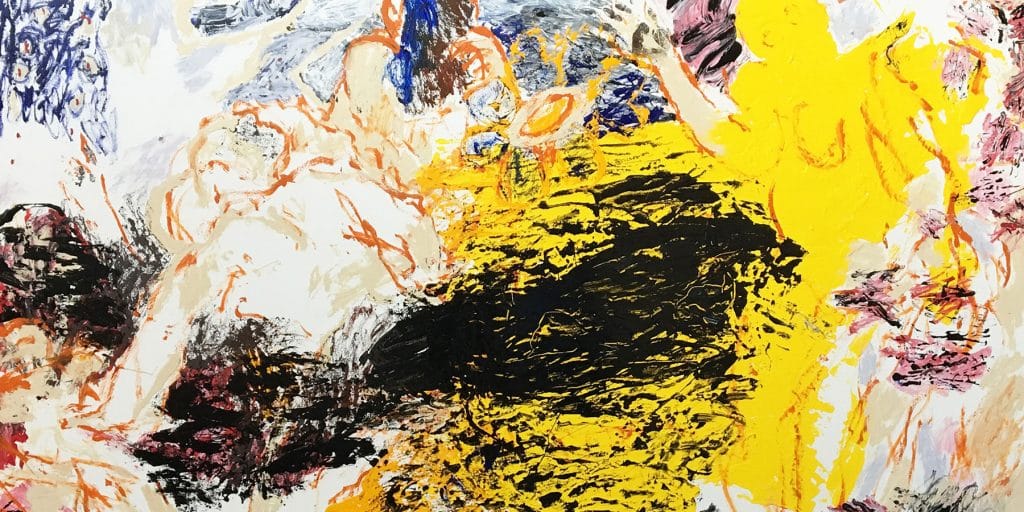 The artist and activist is the subject of a new show at Washington, D.C.'s National Gallery of Art. 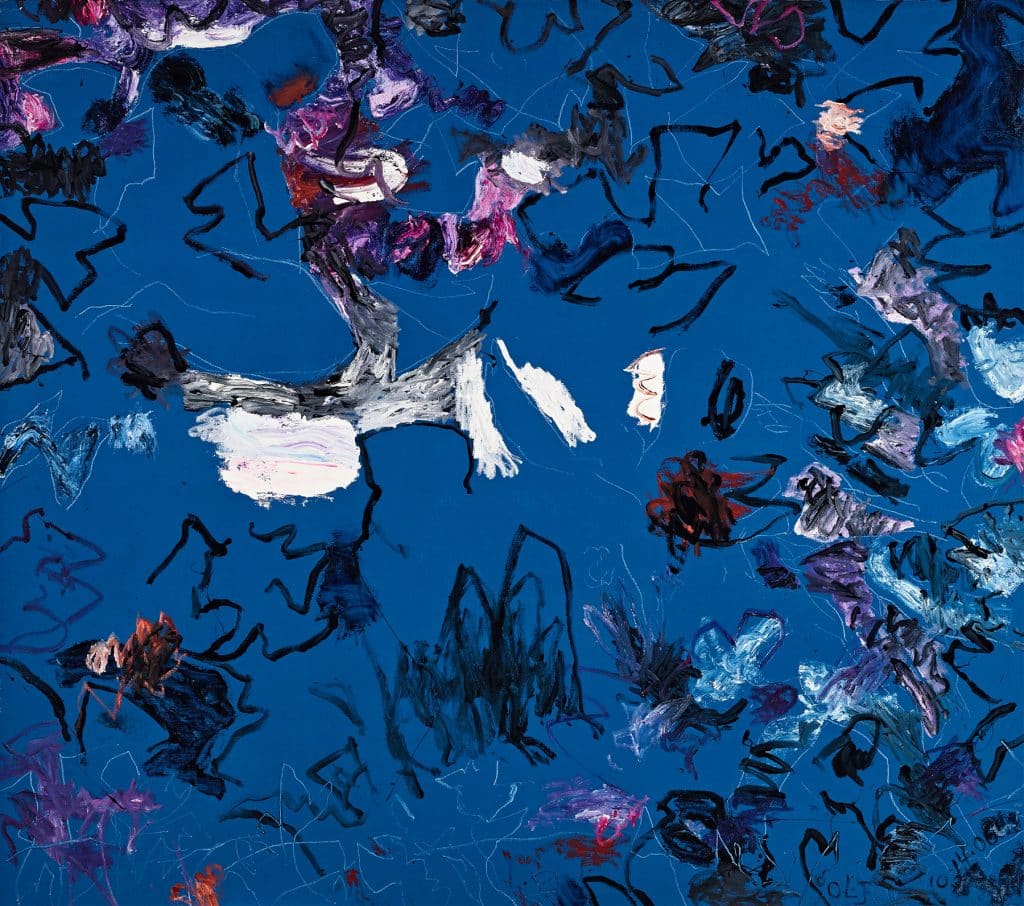 Ask Oliver Lee Jackson about the success of the National Gallery of Art’s current show devoted to his recent paintings, and you feel him pause poignantly on the word recent. “It’s not exactly recent,” he says. “I’ve been honing my art pretty much nonstop for nearly sixty years.”

Born in 1935 in St. Louis, Jackson received a BFA from Wesleyan University in 1958 and an MFA from the University of Iowa in 1963 — an era of racial, artistic and social ferment that likely framed Jackson’s sensitivity to the black community, to the often complicated exchange between Western and indigenous cultures and to Abstract Expressionism’s truth to form. His work lies somewhere in that mix but is equal to none of its components — too carefully process based to be illustrative, too magical in its impact to be merely form.

Jackson is a purist, if he can be labeled as anything; his clear commitment is to “the work.” Talking with him about art and life is a little like being exposed to Thelonious Monk or Frantz Fanon — you glean that the craft is a fierce, even sacred matter.

Incisive at 84, Jackson today works with no assistants in a busy Oakland, California, studio where jazz plays and friends stream in and out. In addition to teaching art, philosophy and Pan-African studies at various respected colleges, his six-decade résumé includes residencies, exhibitions and works in collections at venues like New York’s Museum of Modern Art; Metropolitan Museum of Art; Washington D.C.’s National Gallery of Art; Chicago’s Museum of Contemporary Art; Seattle Art Museum and many others. Yet, for all that, he’s managed — by choice — to remain largely out of the art world limelight. Until, that is, two adamant supporters, curator Harry Cooper and gallerist Barry Thomas Malin, entered the picture. 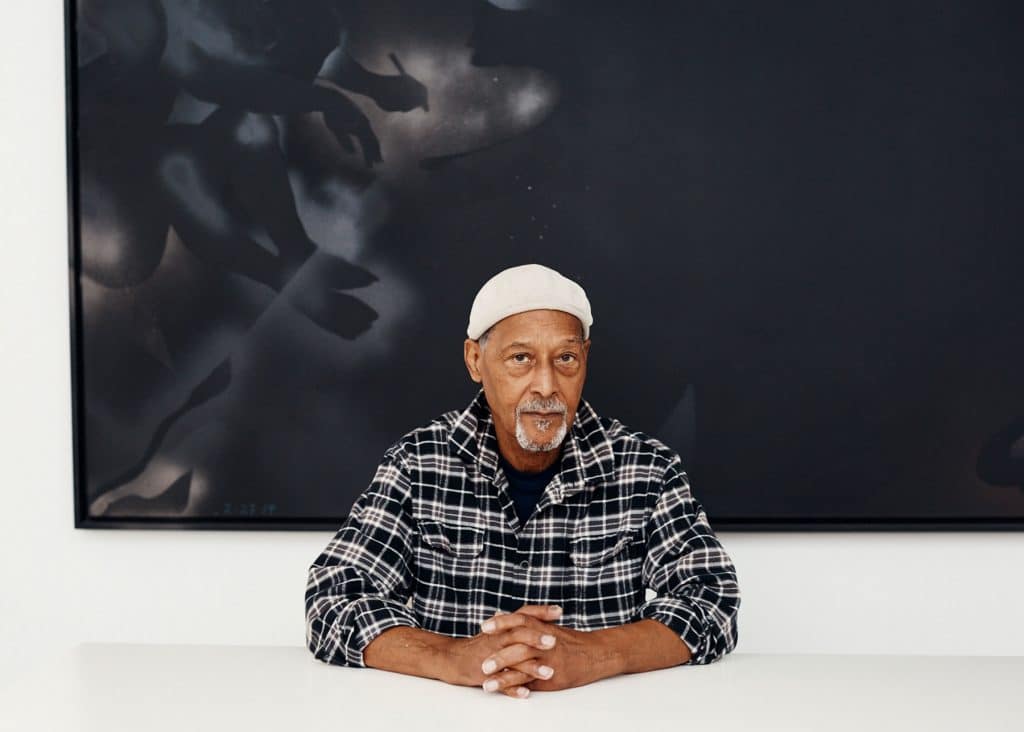 Although he’s spent most of his 60-year career flying under the radar, Jackson has works in New York’s Whitney and MoMA and the Museum of Fine Art, Boston.

Cooper, a former curator of modern art at the Harvard Art Museums and a jazz buff, became fascinated with Jackson after seeing composer and saxophonist Julius Hemphill’s album cover that featured his work. In 2000, he invited Jackson to be an artist-in-residence at Harvard, and now, as the senior curator and head of the department of modern art at Washington, D.C.’s National Gallery, he has mounted the stunning “Oliver Lee Jackson: Recent Paintings.” Running through September 15, the show features 18 pieces, seven of which are never-before-exhibited canvases created over the past 15 years. Malin, meanwhile, mounted Jackson’s first solo New York show in 25 years at his gallery, Burning in Water, in 2018, only a short time after learning about his work and then meeting him in Oakland.

Here, Jackson discusses his process, and Malin reveals his history with the artist. 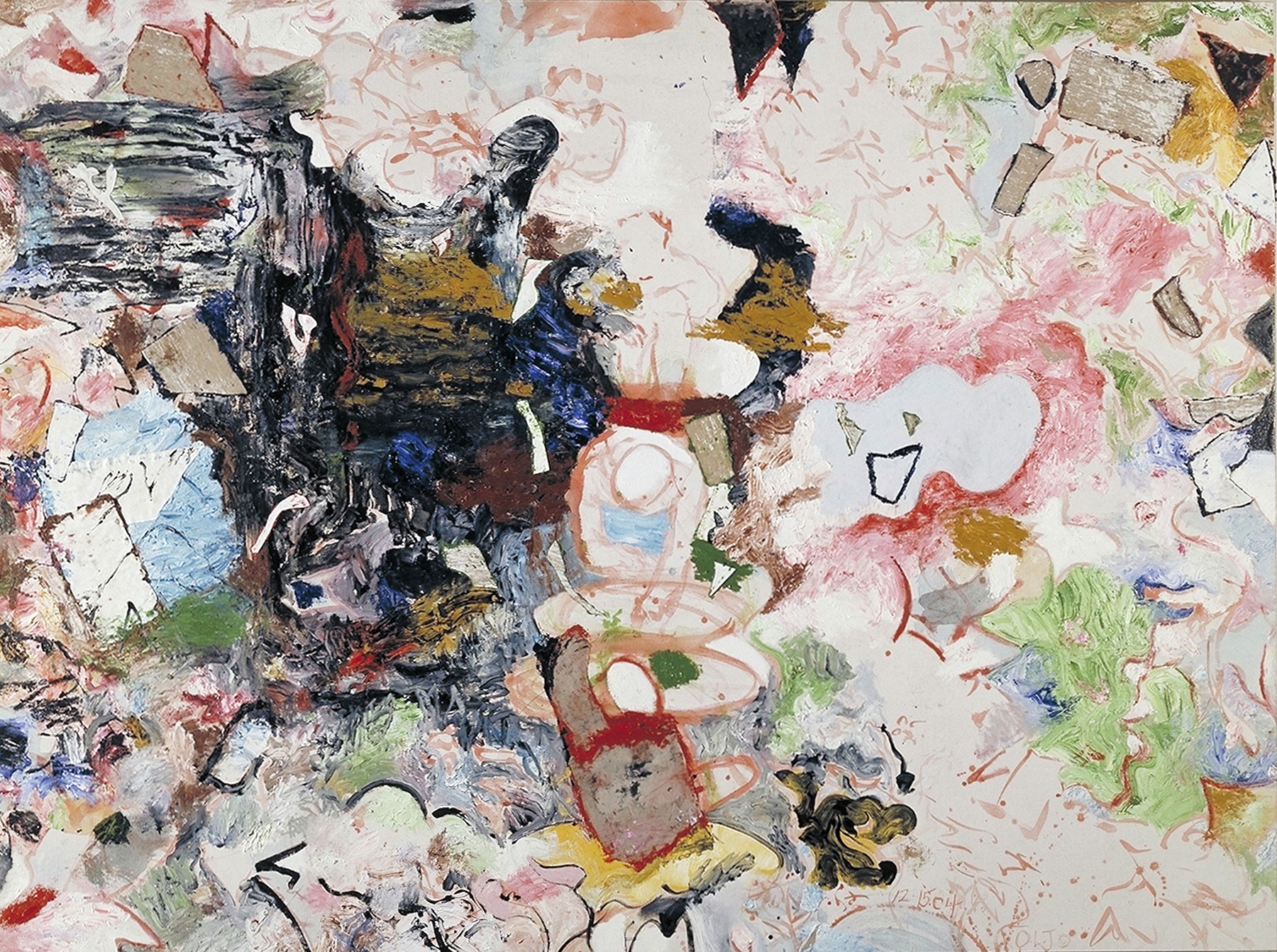 Your paintings are called abstractions, but you always qualify this term.

Oliver Lee Jackson: If by abstraction, you mean that I move around forms with no reference to the world, then my work is not abstract. I utilize abstract shapes, textures, colors, lines, all sorts of materials in a very thoughtful way to serve the function of each work. The intent is to achieve, sustain and share something profound about the world — not necessarily a picture of a person or an event or a thing. 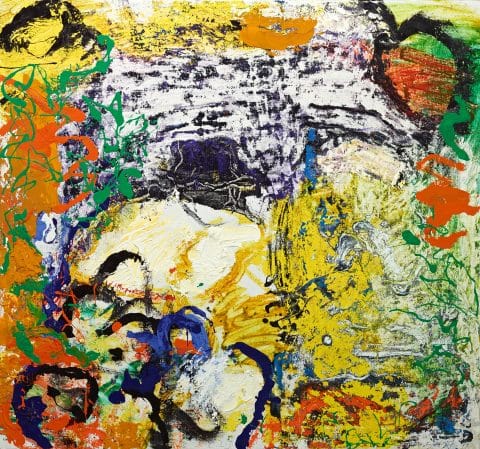 Would you call your work figurative then?

Words like figuration or naturalism usually imply people or landscapes — my works are most certainly not landscapes. Whether you see a recognizable figure or not, my work is inspired by nature. It always references an experience from the world, because that is where I, and all humans, come to know ourselves.

Your work features a lexicon of strident and lyrical figures, some lithe, some fulsome, that are barely suggested. But in the end, they read as shapes, textures and atmospheres.

Again, the word figurative usually means a human. But that is just because we humans have huge egos and see ourselves as the central event in nature. Everything in the world is part of nature. Every object or thing we experience is figurative. But once figures — an arm, a drum, whatever — enter a work, they are never descriptions of the world. My figures are carriers of form, vehicles to create a space or modality.

Can you explain what you mean by “creating a modality”? Are you using form to express your emotions?

Each season has its modality — a sensation, a space in which, and through which, we experience it. It is not exactly emotion. Emotion is external. It is the outward and obvious expression of a unique and complex inner space. Happiness is an emotion, but some shout when happy, others get very quiet.

The same goes for grief. I can show no outward signs of struggle and yet experience it.

You have a history of African American advocacy that goes back to the sixties.

In the nineteen sixties, my dear friend, the late saxophonist and composer Julius Hemphill, and I worked with other St. Louis musicians, actors, dancers, poets and visual artists in the Black Artists Group, or BAG, exposing underprivileged black communities to the richness of black arts beyond easy popular entertainment. It was one of Julius’s album covers with my art on it that Harry Cooper saw when he became aware of my work. 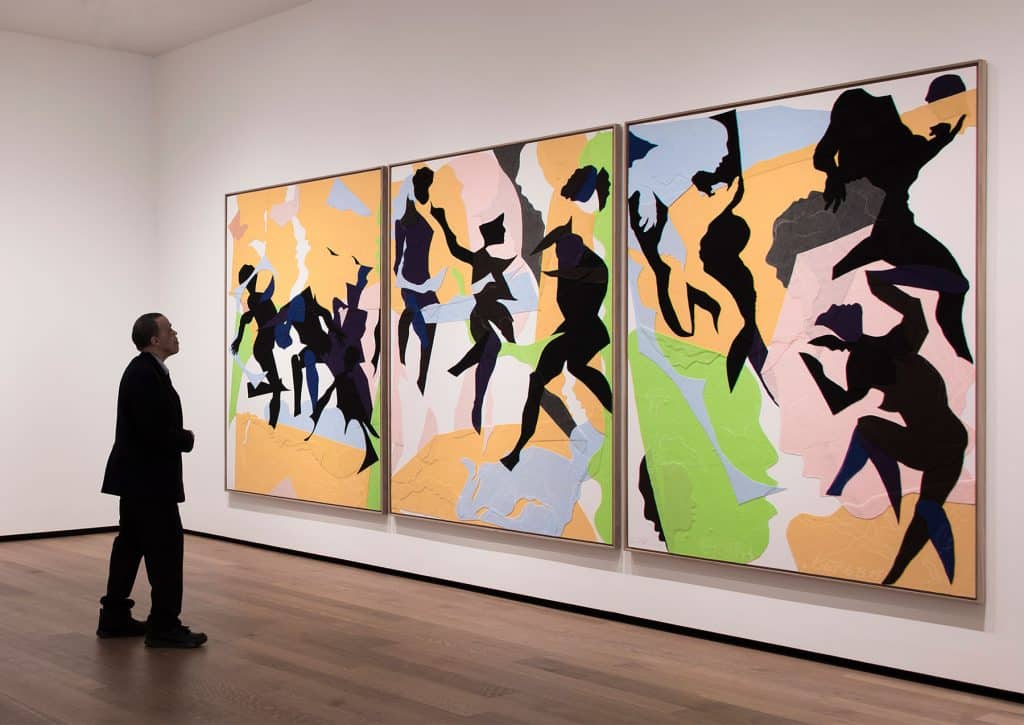 I read that in 1971 you founded African Continuum as another way to showcase African creative traditions, but you resist being labeled a political artist.

Race is not my theme. Art is my theme. Yes, I’ve worked on behalf of equality, and I was deeply inspired by my travels to Africa, where I learned that any materials — rags, metal, paint — can be thoughtfully selected in the service of artistic function.

African art also taught me that when forms do their job as form, when they are disciplined and clear, the final work becomes something else. It then transcends formal decisions and becomes a space, a modality where artist and viewer meet on common ground. I am a black person making art quite seriously, and that is very different from being a black political artist. 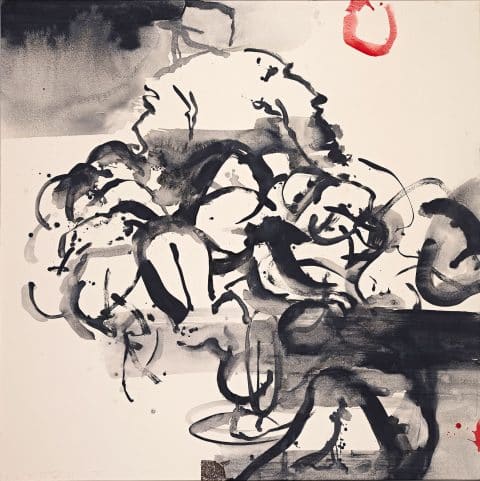 Dr. Malin, how did you come to know Oliver Lee Jackson and his work?

Barry Thomas Malin: I had an active career as a face and neck surgeon — very intense work. I’d always collected art avidly. I had to start selling some pieces to make room for more art, and I found that the process was really fulfilling.

Are you involved in the National Gallery of Art exhibition?

Harry’s show was in the works during the time I was planning my shows. Of course, we were aware of each other’s projects. I deliberately did not exhibit any of the works he was considering because the shows were staged close together. We wanted to avoid overlap, and I had other goals.

Collectors and institutions are primarily familiar with Oliver’s admittedly stunning paintings. I wanted to showcase and expose the whole arc of work: paintings, drawings, the mixed-media pieces and the larger-scale sculptures.

Many of the sculptural works are huge and heavy, hard to transport, some are made of hefty Carrara marble. Oliver works without assistants and designs all these remarkable pulleys and contraptions to move heavy pieces around while he works. I was determined to show the range of work. 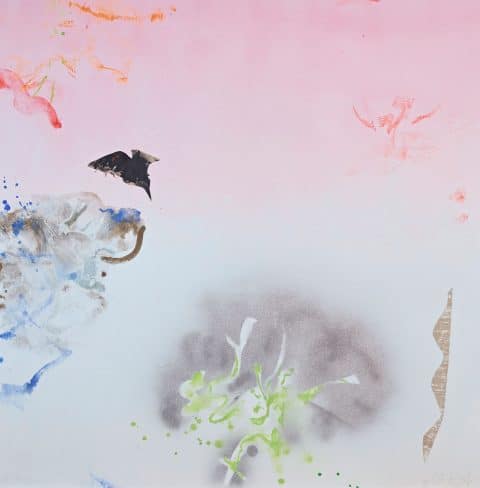 His influences and exposure are expansive: Dogon art, Giotto, Michelangelo, Vermeer, El Greco, all sorts of music and dance.

What was it that sent you off to meet him in Oakland?

His ingenuity, his vision, his rigor. He wants the viewer to be enveloped in a kind of dream that is remotely familiar, that you want to enter but that you cannot fully know. The images are enveloping and evocative, like avant-garde music or free-form jazz.

He understands that when he uses African references, many viewers may not understand the deep ritualistic, coming-of-age relevance that this art has for African culture. But that does not change its ability to impact us. I think that is part of his point.

Whether lighthearted, like Sculpture No. 3, which we showed, or darker, like No. 5, which is on view in D.C., Oliver’s art is aesthetic instead of cognitive. Rather than analyze or intellectualize it, you respond to it experientially, visually. 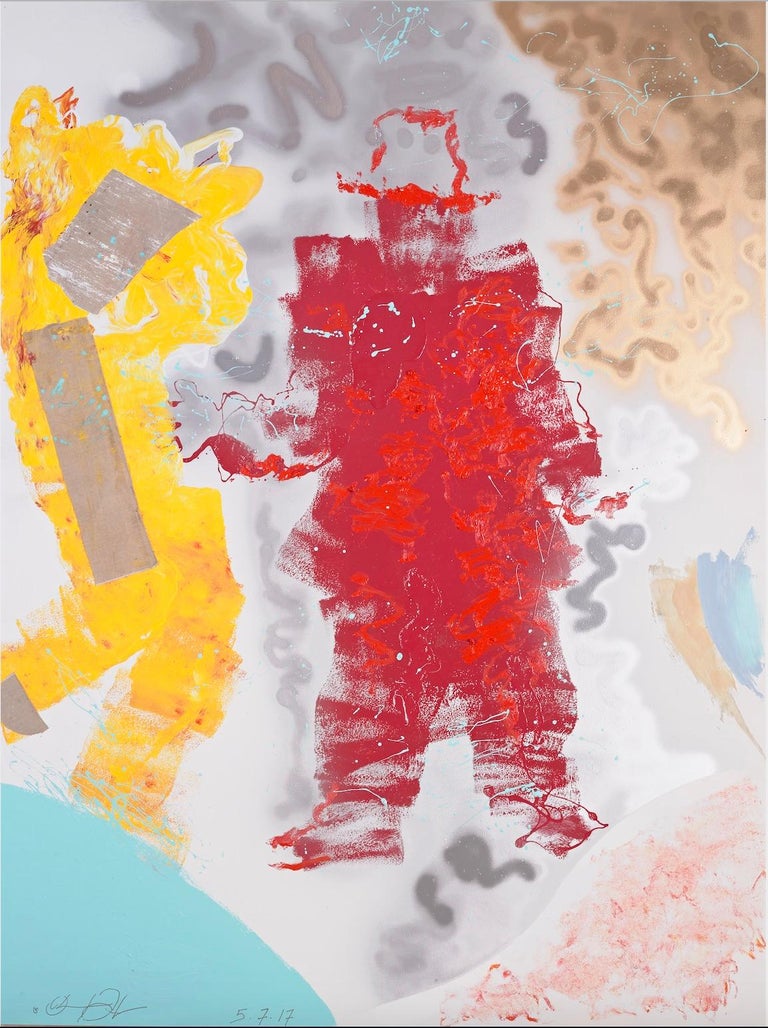 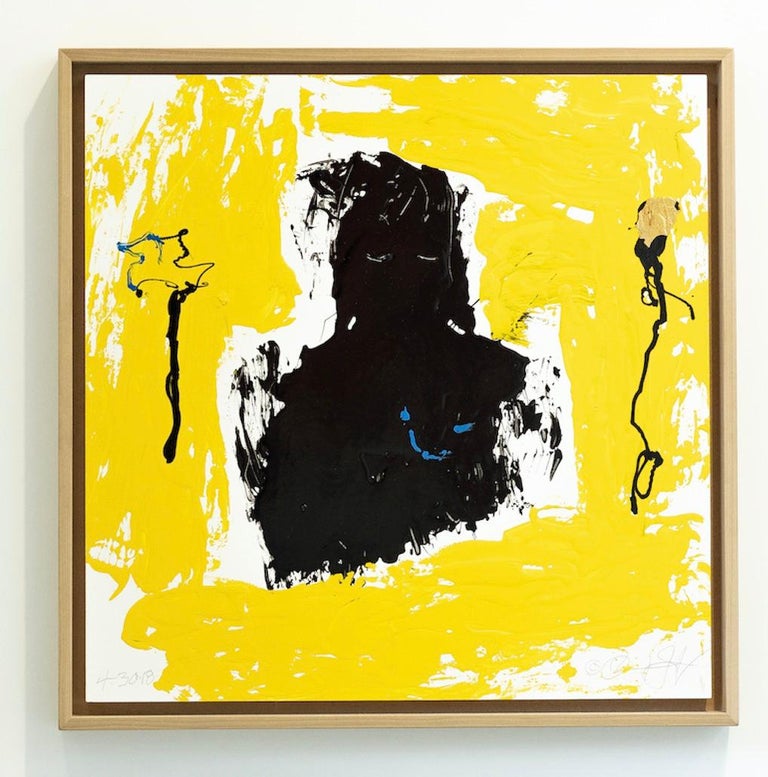 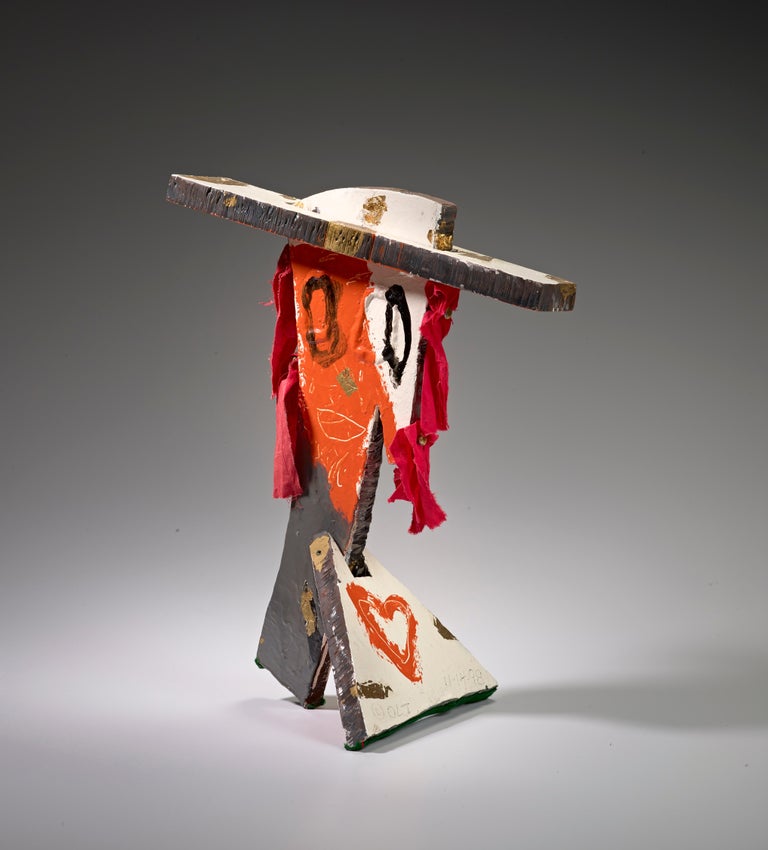 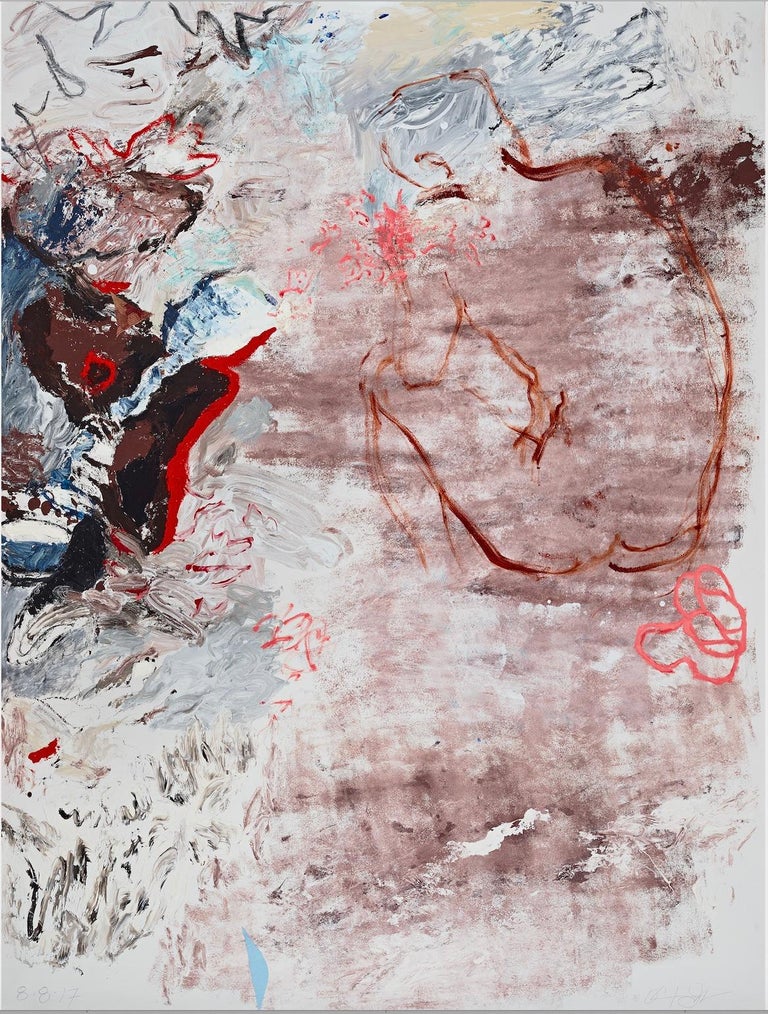 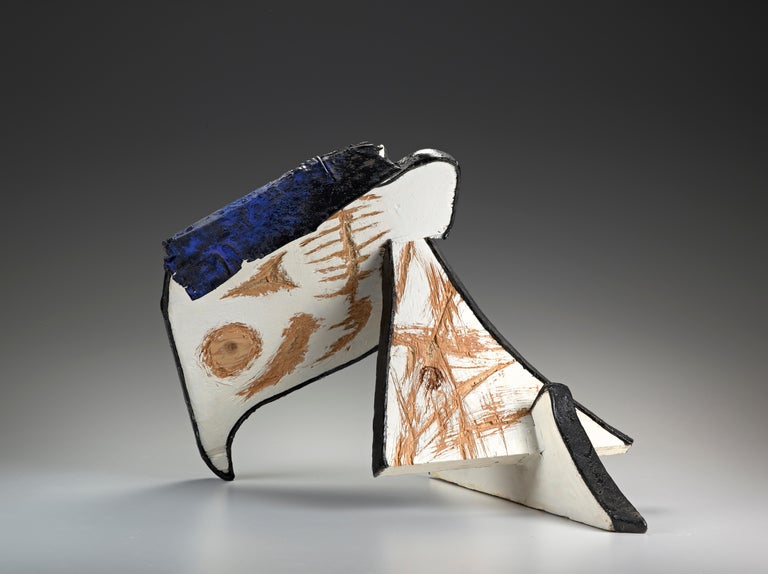 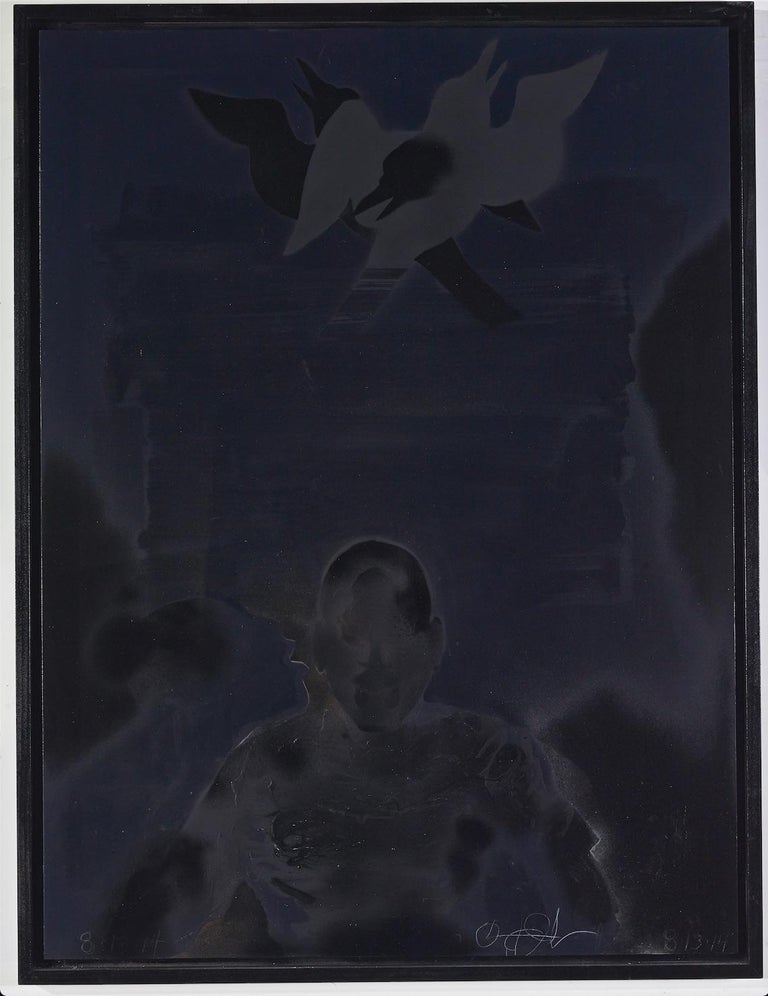 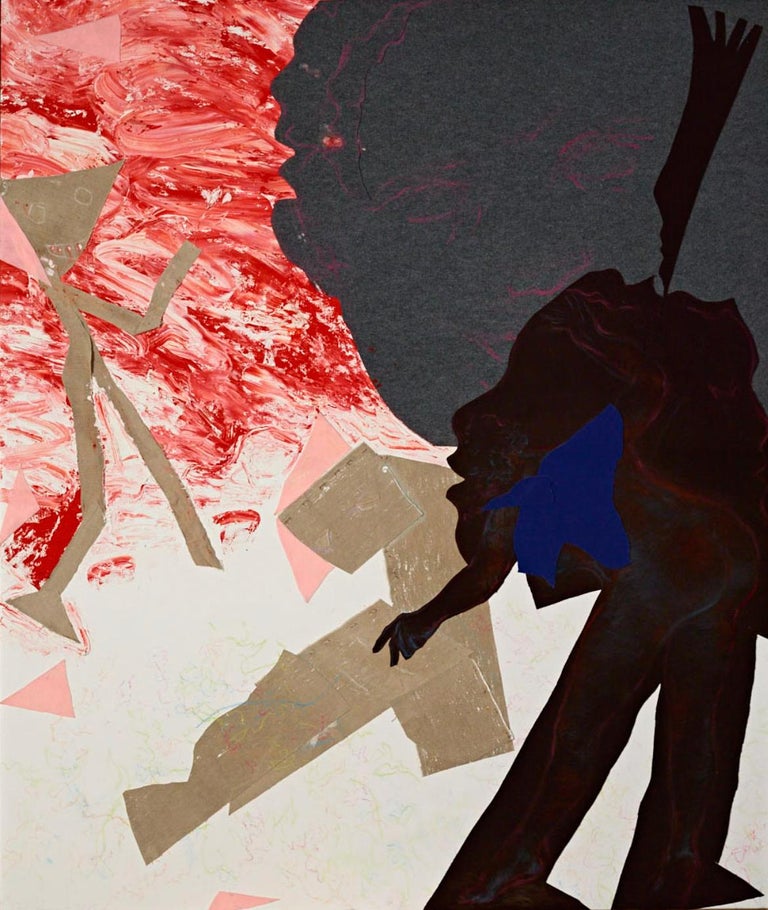 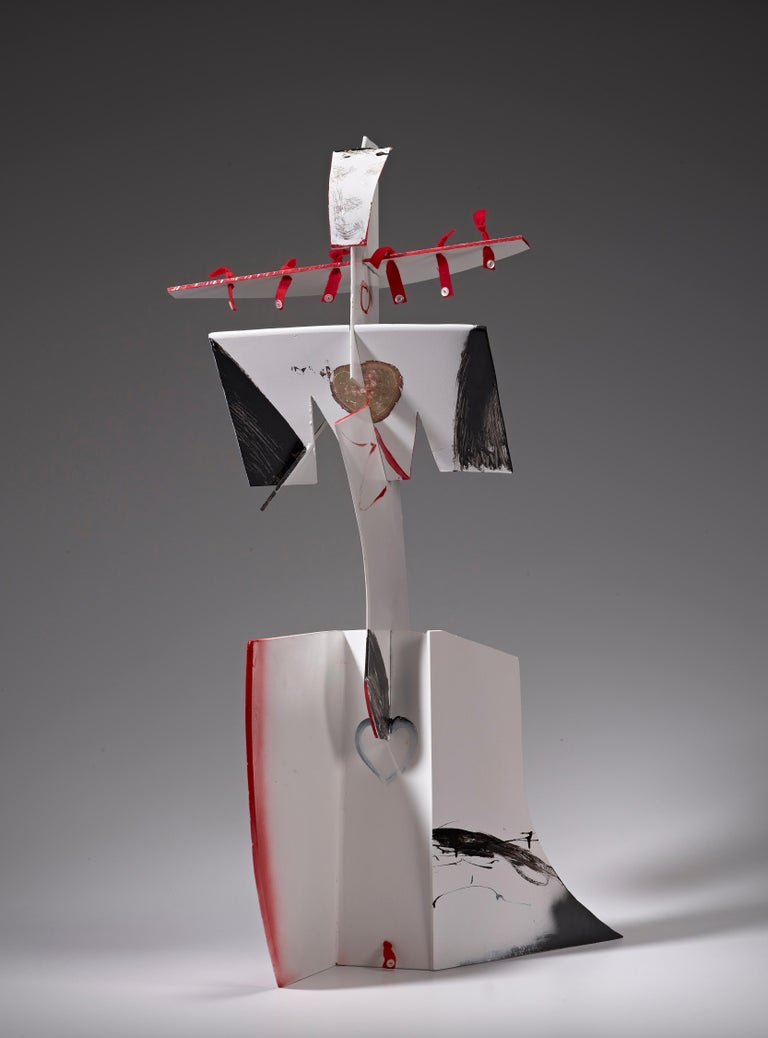