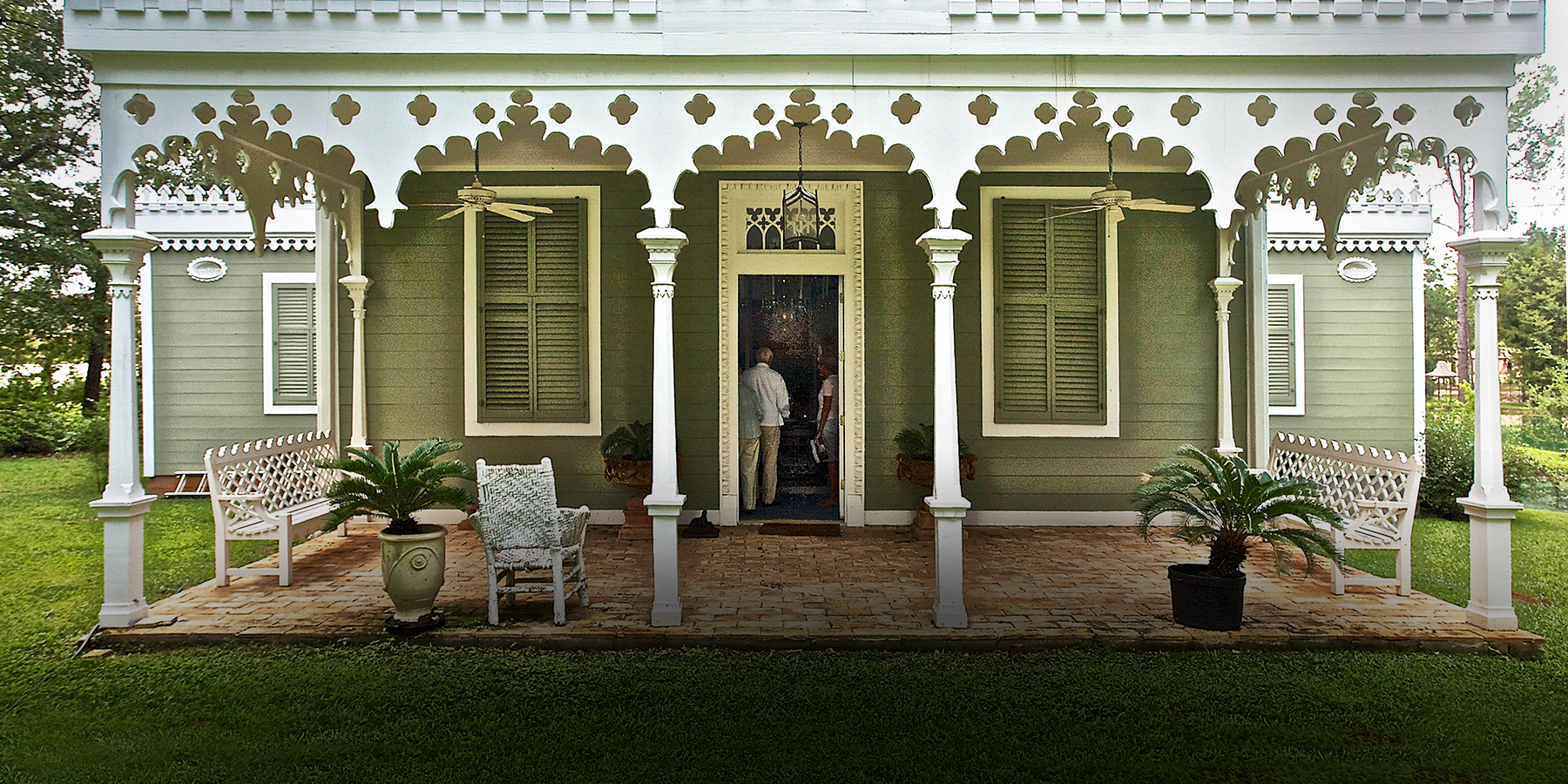 A new book takes readers into the dazzling, bucolic and ever so slightly baroque Georgia estate of Furlow Gatewood, a leading expert in antiques and evangelist for Southern vernacular architecture.

June 11, 2014Collector and antiquaire Furlow Gatewood relocated two historic homes to his estate in Americus, Georgia; here, he sits in the living room of one of them, the pre-Civil War Lumpkin House (photo by Rodney Collins). Top: The Gothic transom window of a door Gatewood found “somewhere” on the Hudson River inspired the Peacock House’s fretwork. His longtime carpenter, Joe McElroy, says Gatewood instructed him “to build me a house around this door.” All photos by Paul Costello, except where noted, and all courtesy of Rizzoli

With his good looks, great manners and enormous charm, Furlow Gatewood is the epitome of a Southern gentleman. Dogs are his passion, and his homemade cheese straws are legendary. But these are incidentals. What sets Gatewood apart is his singular eye. Afflicted with the collecting bug since he was a child growing up in the small town of Americus, Georgia, he has been on the prowl for all things beautiful — be it 19th-century Regency mirrors, abandoned Victorian wrought-iron vents, French directoire chairs, faded remnants of chintz or blue-and-white porcelain (one of his most serious passions) — for more than 70 years.

Artful collecting is not a skill you pick up in school. It is, instead, learned in the course of the pursuit. And no one has pursued more avidly or expertly than Gatewood, as is made perfectly clear by One Man’s Folly: The Exceptional Houses of Furlow Gatewood (Rizzoli), written by Julia Reed and with a foreword and afterword by New York interior designer Bunny Williams.

Gatewood’s professional career first got off the ground in the 1950s, when he left Americus (where he had been running a flower shop — “a disastrous occupation,” he says) and came north to study at the New York School of Interior Design. At the same time, he opened a tiny antiques shop on East 66th Street.

However, “Furlow never wanted to be a designer,” laments Williams in her contributions to the book. “Too bad, as he would have made a great one.” Not long after his arrival in Manhattan, he met and joined forces with Williams’s husband, John Rosselli, who owned another store nearby on Second Avenue, and they have been business partners for more than 50 years. At 90, Gatewood finally quit buying for their company, John Rosselli Antiques, retired full-time to Georgia, and called a halt to his regular antiques runs between there and Manhattan. But he still shops for himself, and every month he makes the six-hour round-trip drive between Americus and Atlanta — where he shops at Scott’s Antiques Market, long one of his favorite sources.

“Furlow never wanted to be a designer,” laments decorator Bunny Williams. “Too bad, as he would have made a great one.” 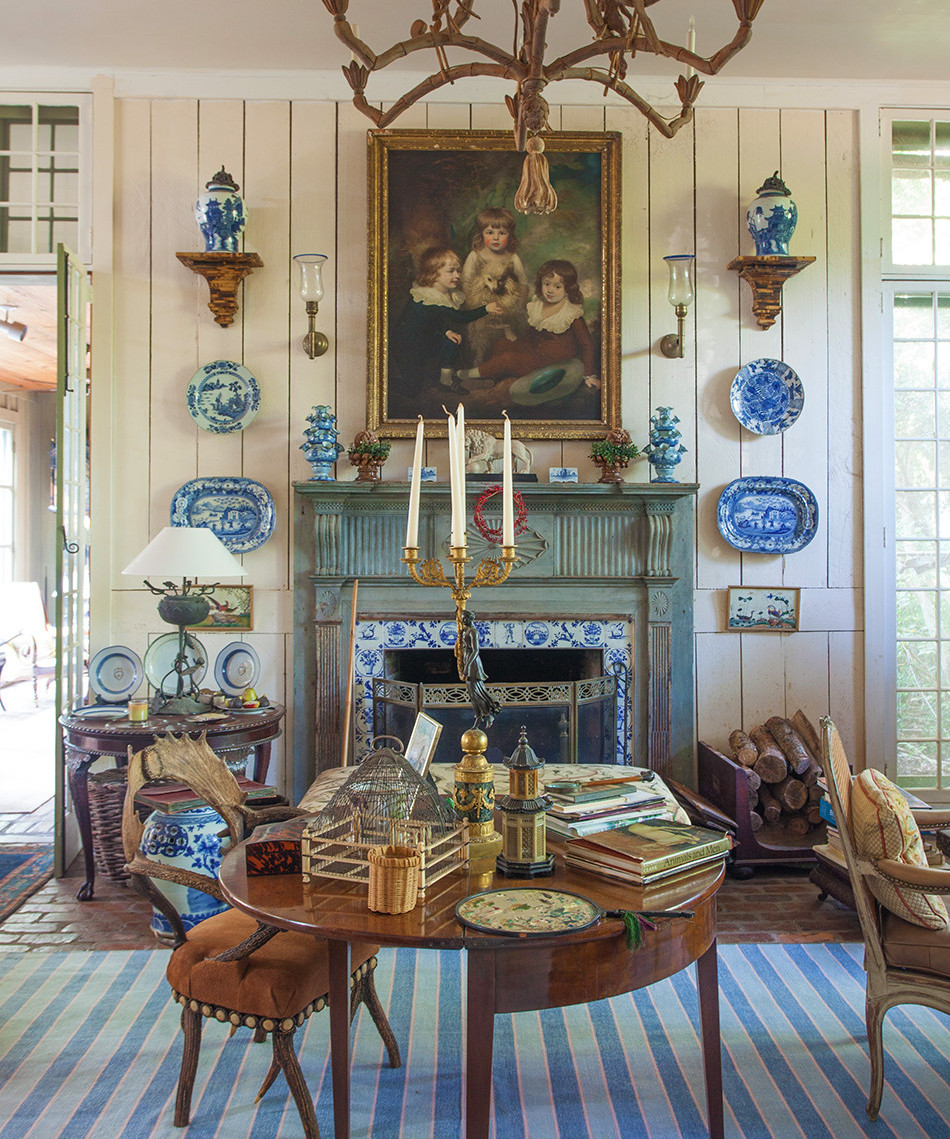 In the property’s restored carriage house, tiles that Bunny Williams and John Rosselli had made in Italy surround the fireplace and complement Gatewood’s porcelain collection.

One Man’s Folly focuses on the unique architectural compound Gatewood has fashioned on 11 acres of family land in Americus. Today, the estate contains: a renovated carriage house, built on the property in the mid-19th century and now known as the Barn; the Peacock House, designed by Gatewood from scratch; and two period houses — Cuthbert and Lumpkin — that he moved from nearby towns and has overhauled and restored. Each structure has a distinctive flair, and each is filled with an astonishingly perfect collection of furniture, textiles, china and art. Most surprising is that three of these four houses have been created within the last 10 years, when their maker was already in his 80s. (Gatewood recently celebrated his 92nd birthday.) What he refers to as a mere “folly,” the majority of us would consider a gargantuan feat.

Gatewood began work on the Barn in the 1950s, explaining, “It was a falling-down carriage house that had got to the point where it had to be restored or torn down.” He shored up its structural underpinnings by adding a long dining room with huge bay windows (some decorated with Gothic fretwork), two porches and bedroom wings, which also gave the space definition. The palette, as in all his spaces, is primarily neutral, and there are blinds, not curtains. Blue-and-white porcelain abounds, the furniture is gorgeously eclectic and comfort is never compromised. 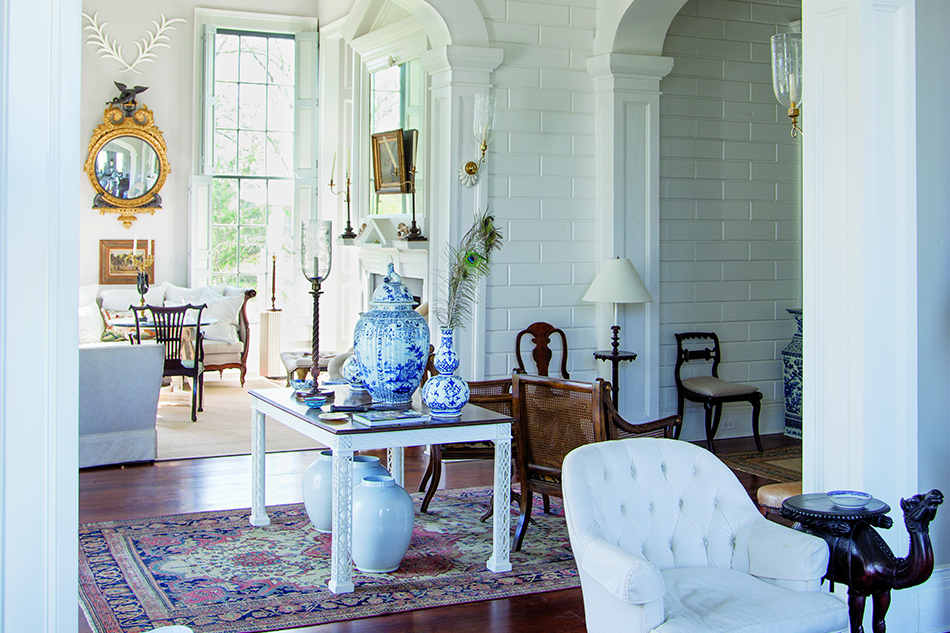 A view of the reception rooms at Cuthbert, the other historic house Gatewood had moved to his property. 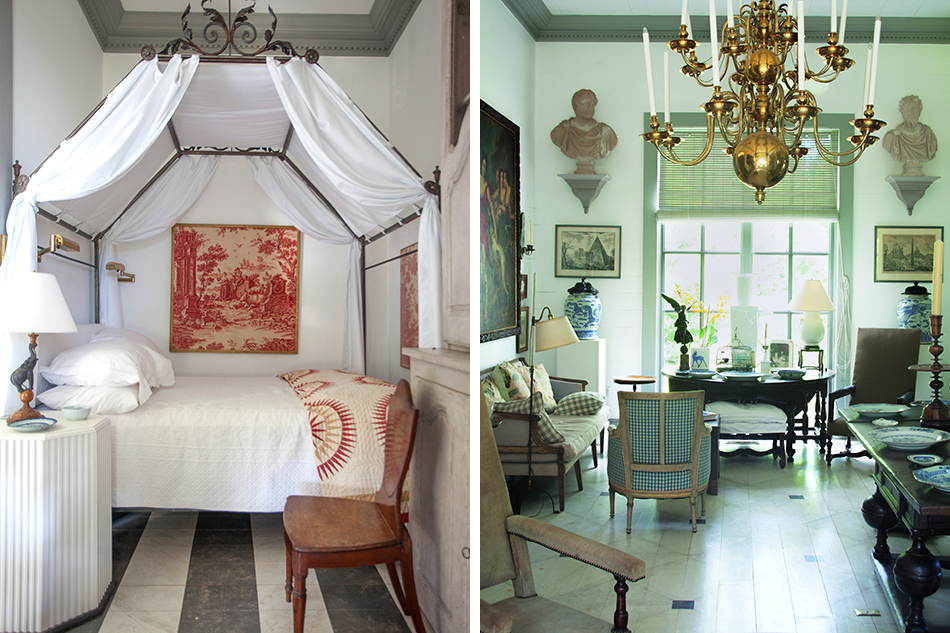 Left: Framed pieces of vintage toile decorate the walls of a small bedroom; the bed and table are from John Rosselli. Right: In the front room of the Peacock House, the mix of fabrics – Robert Kime Susani Yellow, a simple check, white duck cloth and a faded linen print – is typical of Gatewood’s style. He found the busts in England. 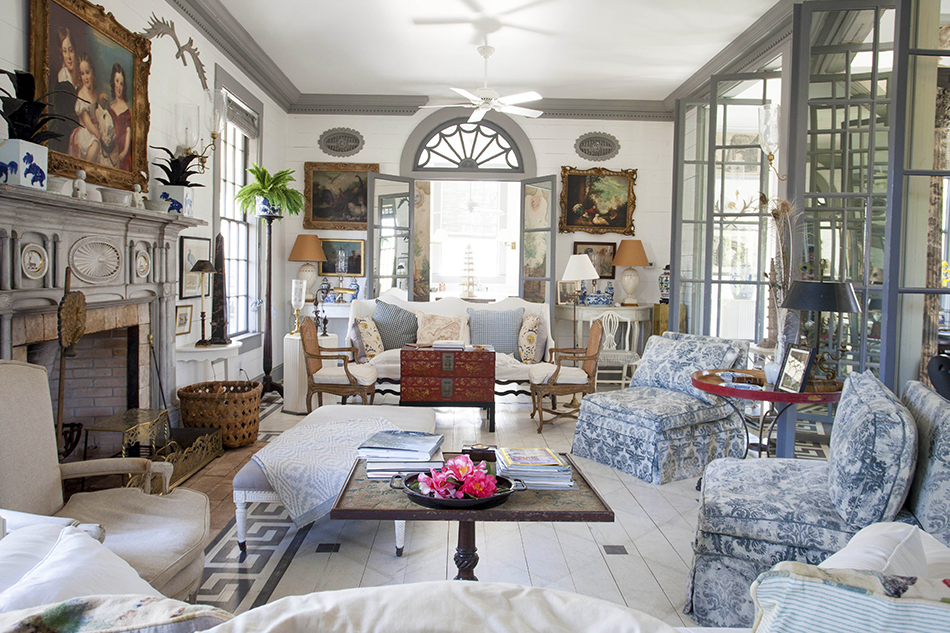 Before its renovation, the Peacock House was a wintertime repository for outdoor plants, complete with dirt floors. 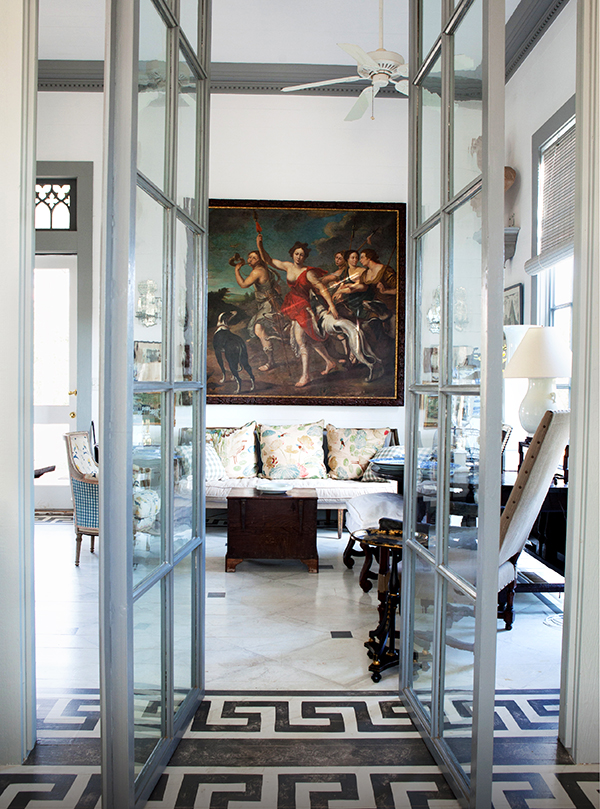 In the Peacock House, a pair of French doors that Gatewood found at the Pier Antiques Show, in New York, open to a living room dominated by a painting of Diana, goddess of the hunt.

He built the Peacock House 10 years ago and today cheerfully admits that its primary reason for being was to make use of three sets of extraordinary French doors he found at the Pier Antiques Show, in Manhattan. It is a dream of an architectural folly, with painted floors, a superb mahogany mantel that Gatewood says he “grayed up” with several coats of paint, lots more of his signature blue-and-white china, simple slip-covered chairs and a back porch whose elaborate white-fretwork roof makes it looks as if it it was lifted from a Maharajah’s palace.

Next, Gatewood moved two historic properties onto his land: the Gothic Revival Cuthbert House, in 2010, and, later, a pre-Civil War–era cottage, the Lumpkin House, whose appeal, Gatewood admits, lay primarily in its magnificent front doors and the gingerbread decoration of its front porch.

Beyond its in-depth exploration of Gatewood’s creation and furnishing of these four buildings, the book also offers glimpses at the surrounding landscape that has evolved around the houses. In addition to hydrangeas, crape myrtle bushes, roses and camellias, the property features an elegant chicken house, which now serves as a hospital for injured peacocks; two pigeonniers that Gatewood designed around a pair of 18th-century fanlights; an antique French fountain and a Gothic “chapel,” which he uses to store garden tools and equipment.

The maker of this magic has never bought an antique or artifact with an eye toward future value. “I buy what strikes my fancy,” Gatewood explains in the book. “You know what, I really like everything.” That statement offers profound insight into a true collector’s makeup, and it’s one of the many lessons found within One Man’s Folly that make you think that the art of collecting might well be teachable after all. Here is a book to be read, studied and treasured — one that’s not just inspirational but downright educational. 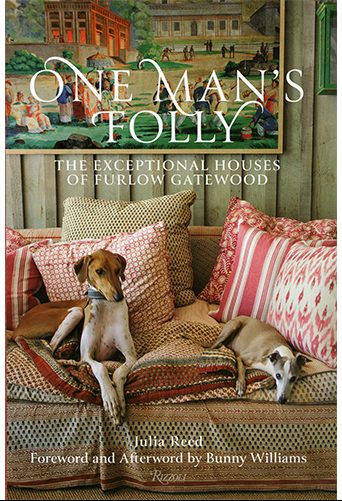