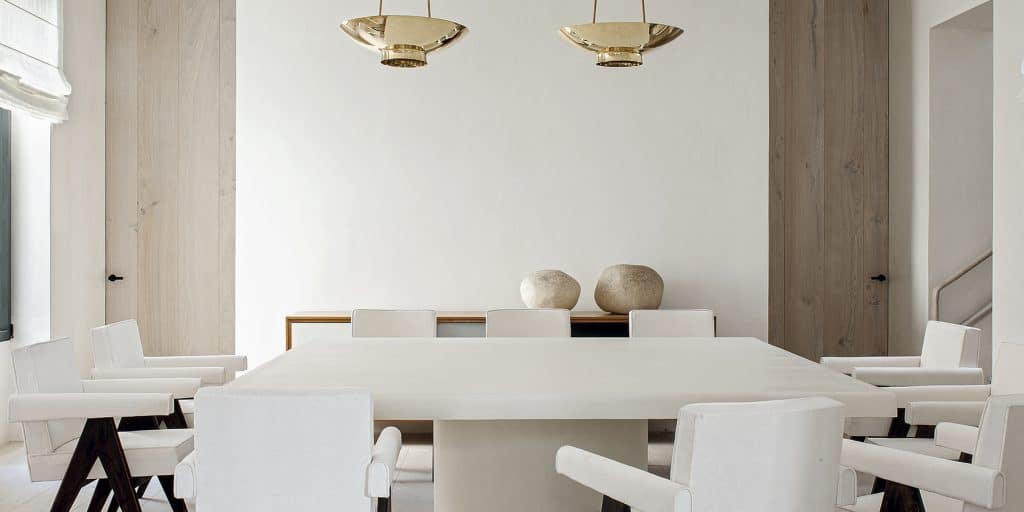 The founder of the Spanish firm OOAA creates quietly compelling rooms and residences that are as spare as they are stylish. 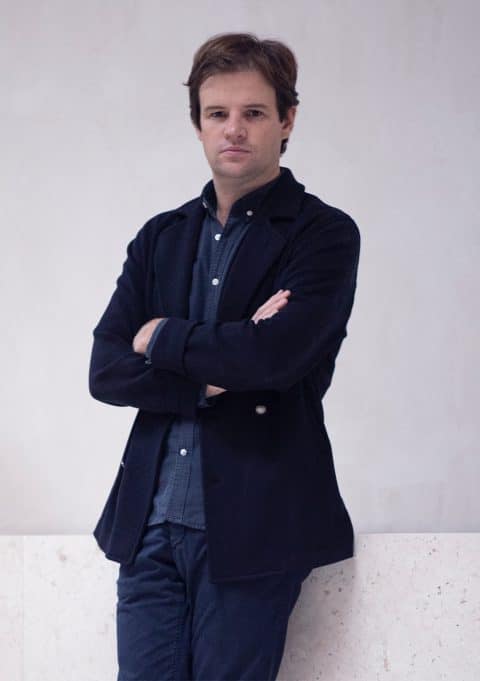 January 26, 2020Spanish designer Iker Ochotorena founded his firm, OOAA, in 2011, immediately after finishing his architecture studies (portrait by Rafael Diéguez). Top: One of his recent projects, a house in Madrid’s Almagro district, landed on the cover of AD Spain. Its dining room features Paavo Tynell pendant lamps found on 1stdibs and Pierre Jeanneret chairs. The concrete table is OOAA’s own design (photo by Montse Garriga).

The October 2019 issue of AD Spain features one of the latest projects by Iker Ochotorena, the 35-year-old founder of the Madrid-based practice OOAA Arquitectura: a nearly 6,000-square-foot duplex in the Spanish capital’s Almagro district. The magazine’s cover displays the apartment’s living room, a subtle space outfitted in a mix of creams and beiges, with a low-slung linen-clad couch, a Willy Rizzo coffee table, a Charlotte Perriand stool and two welcoming armchairs upholstered in a plush teddy-bear-like fabric. The article inside is titled “En Casa Calma,” meaning “calm at home,” and serenity is indeed something Ochotorena strives for and achieves with practiced ease. He claims his overriding goal is to create a “protective atmosphere,” and his minimalistic spaces have quite understandably been described as monastic. “Iker can be seen as an apostle of nothingness,” says AD Spain editor in chief Enric Pastor. “He always looks for silence and timelessness, as if he were a twenty-first-century Fra Angelico creating pure and honest interiors.” 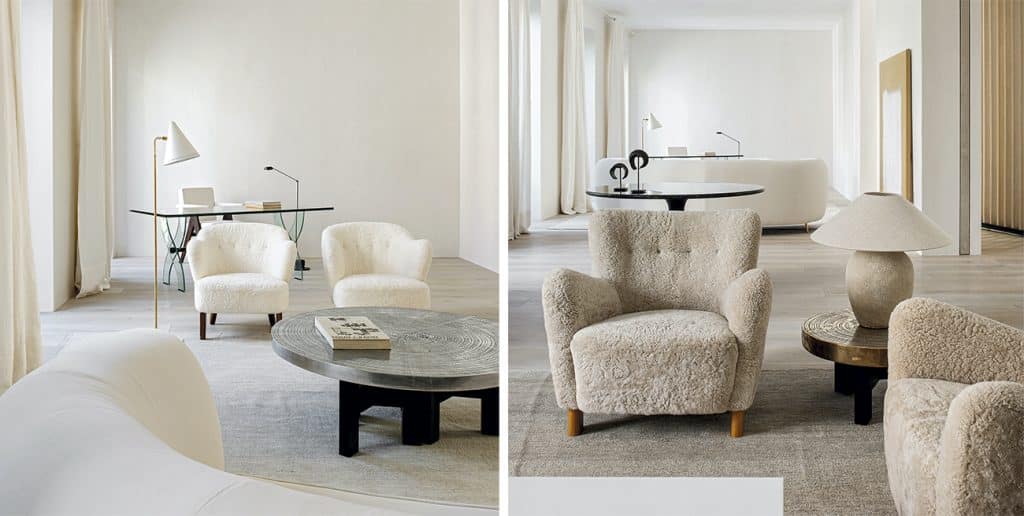 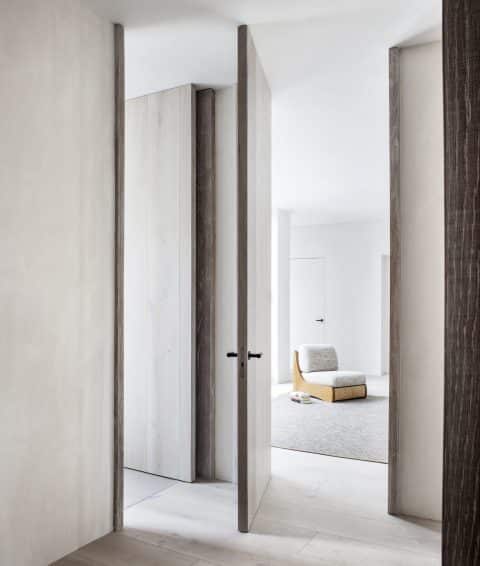 The Almagro home’s oak doors extend from floor to ceiling, creating clean vertical lines that are complemented by a palette of soft neutral colors. Photo by Rafael Diéguez

Ochotorena’s aesthetic is strongly defined and extremely consistent. Comparisons to 15th-century Italian religious painters notwithstanding, it calls to mind iconic Belgian designers Axel Vervoordt and Vincent Van Duysen, both of whom Ochotorena admires. “Especially Van Duysen,” he says. “He creates spaces you feel good in.”

One of his all-time favorite decorators, however, is the late Portuguese-born maestro Duarte Pinto Coelho. At first, the choice seems puzzling. Pinto Coelho’s grand interiors with their rich colors and opulent furniture could hardly be more dissimilar from his own. But Ochotorena, it seems, is a traditionalist deep down.

“I like classic decoration much more than the modern style,” he insists. And, indeed, the sitting room of another Madrid home he designed features an 18th-century French Rococo mirror amid an otherwise extremely pared-down scheme. That mirror, the designer says, is the kind of object he likes — it’s just not necessarily what his clients want. 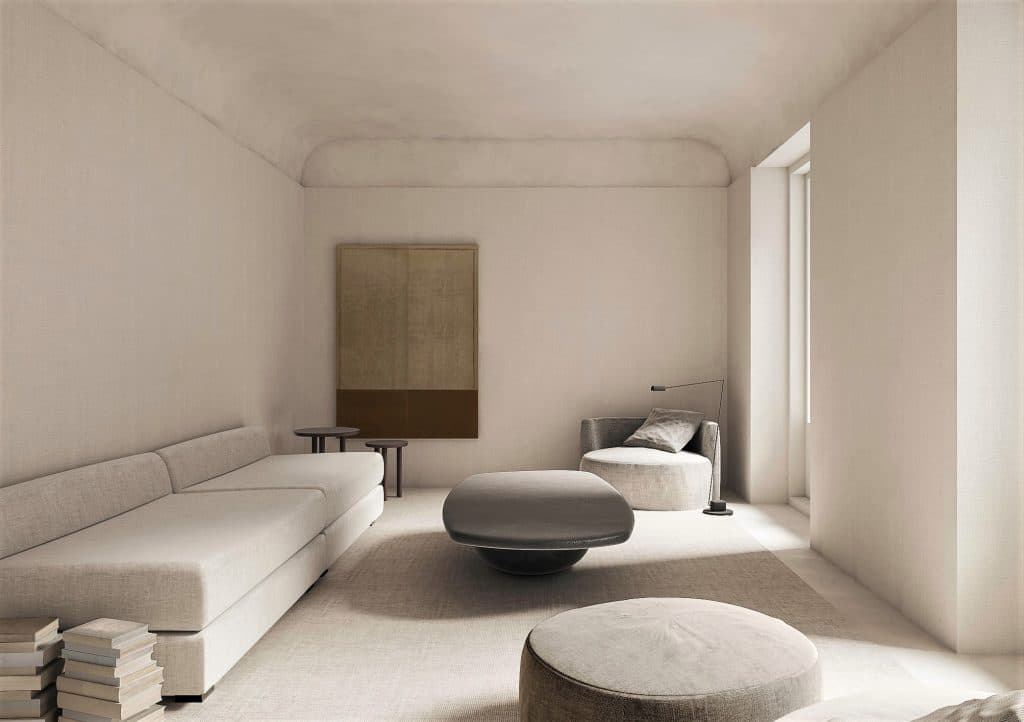 In the living room of an apartment near Madrid’s Gran Via, Ochotorena paired a low-slung upholstered sofa and black stone coffee table of his own design with a chair by Christophe Delcourt and a floor lamp by Tommaso Cimini. Photo courtesy OOAA

Born in 1984 in San Sebastián, in Spain’s Basque country, Ochotorena studied architecture at the Universidad Camilo José Cela, in Madrid, and started working in the field during his last year there; his first commission was the renovation of a friend’s 860-square-foot apartment in San Sebastián, which he reorganized to create a sense of open space, maximizing the natural light and deploying a clean-lined aesthetic — all of which would become signatures. 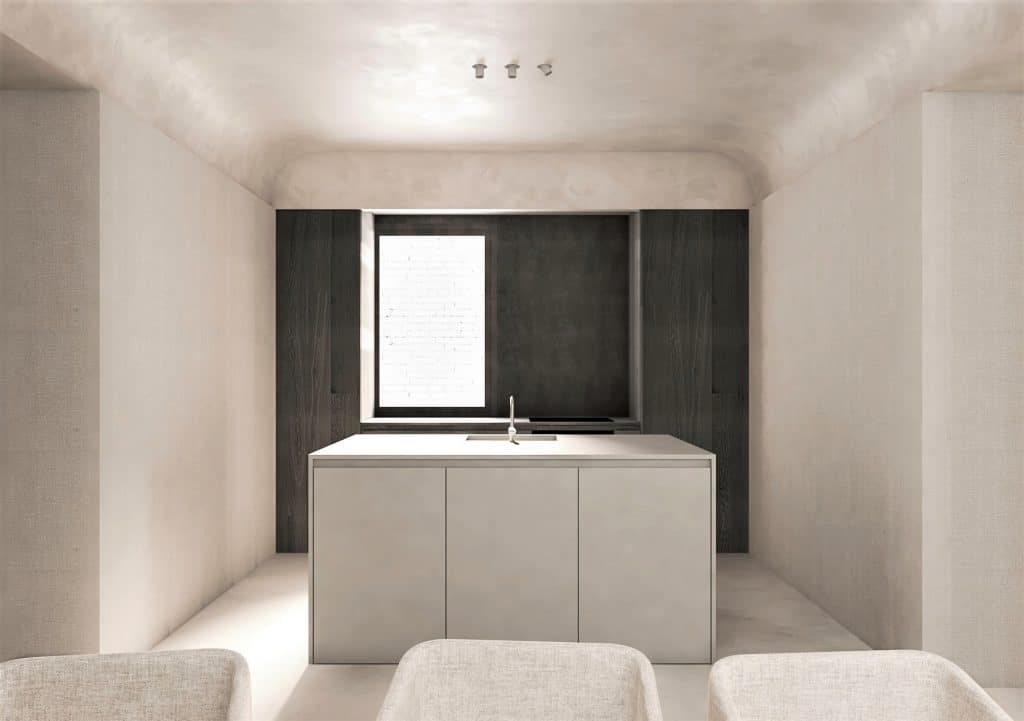 The apartment’s kitchen radiates serenity, as do all the rooms in the residence. Throughout, Ochotorena applied a new layer of thickness to the walls, stopping short of the curving ceiling. His goal, he says, was to give the home a modern look while respecting the historic building’s classical architecture. Photo courtesy OOAA 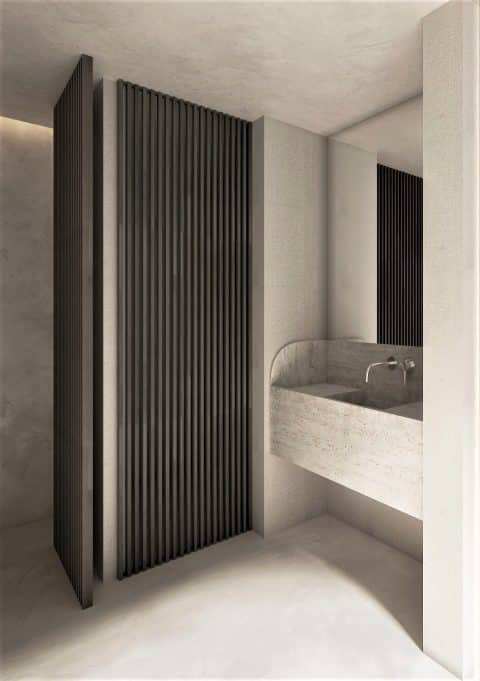 In a bathroom, two smoked-oak doors provide a contrast with the pale travertine vanity and the bone-colored walls. Photo courtesy OOAA

Immediately after graduating, in 2011, Ochotorena set up his own practice. He named the business OOAA because he liked the way the letters, corresponding to the initials of Ochotorena Arquitectos, look together. He also enjoys the fact that it’s confusing to say out loud. (He pronounces it “OA,” as if there were just one of each letter.)

Ochotorena’s work to date has been almost entirely residential, and it’s likely to stay that way for the foreseeable future. Of his 20 or so current projects, only one — the offices of a Madrid marketing firm — is commercial. He recently completed a villa comprising more than 10,000 square feet on the Balearic island of Menorca and is busy with other private commissions, not only in Spain but also in Biarritz, Munich and Amsterdam.

His interiors are characterized by strong architectural lines and perspectives, a neutral palette and an emphasis on textures, with a particular use of wood and stone. He avoids creating anything “groundbreaking or daring,” he says, explaining that his goal is “a sense of naturalness, that everything is in its place.” That said, his spaces never contain all that much. He rarely hangs artworks on the walls and keeps objects to a strict minimum. “I don’t feel the need to complete a project with lots of furniture,” he says. “For me, an interior is more complete with fewer things.” 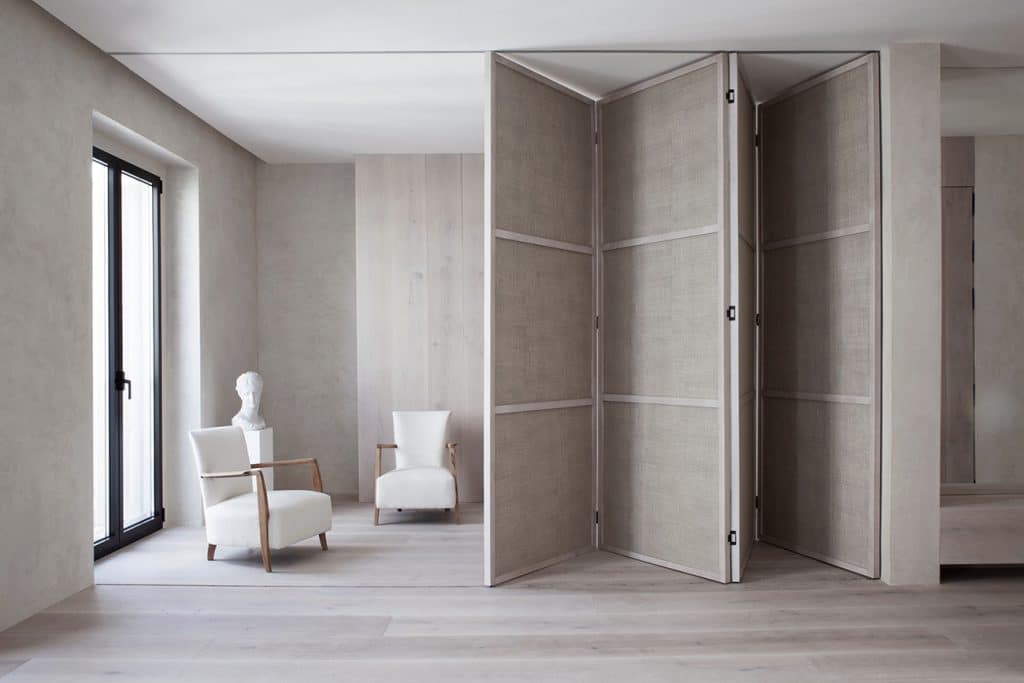 Elsewhere in Madrid, on Calle Blanca de Navarra, Ochotorena designed a residence whose living room features a built-in, floor-to-ceiling, four-panel screen, which can be opened out to turn the alcove into a semiprivate guest room. The chairs are vintage French. Photo by Rafael Diéguez

An especially graceful example of his less-is-more approach is an apartment in an early-20th-century building near Madrid’s Gran Via. Ochotorena removed the existing architectural details, created a gently coved, limewashed ceiling and clad the walls with a paper-backed fabric in an almost identical tone. In the images of the project on his website, the only accessories are two strategically placed piles of books and a pair of spindly floor lamps. He doesn’t shy away from decor entirely, however. The living room, for example, features a custom black stone coffee table and a bespoke sofa, both of his own design, the latter upholstered in bone-colored linen. An impossibly thin Tommaso Cimini bent-arm floor lamp stands beside a Christophe Delcourt armchair. 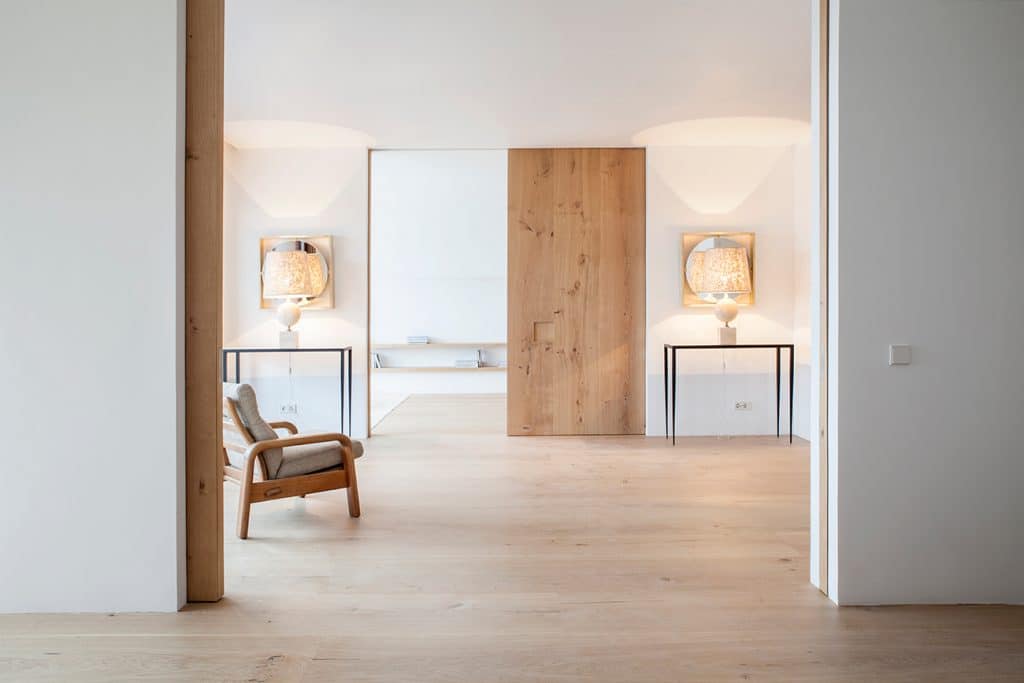 A similar asceticism defines the house on the outskirts of Madrid that Ochotorena shares with his wife, Maria Escauriaza, and their two daughters: four-year old Michaela and one-year-old Maria. “I can’t touch anything,” says Escauriaza, who manages the studio and the business side of the firm. “I can’t even add a cushion. It’s Iker in his pure state.” What about the kids? “They’re used to having very few things,” Ochotorena says. Adds Escauriaza, “Our girls are well behaved. They know their father.” 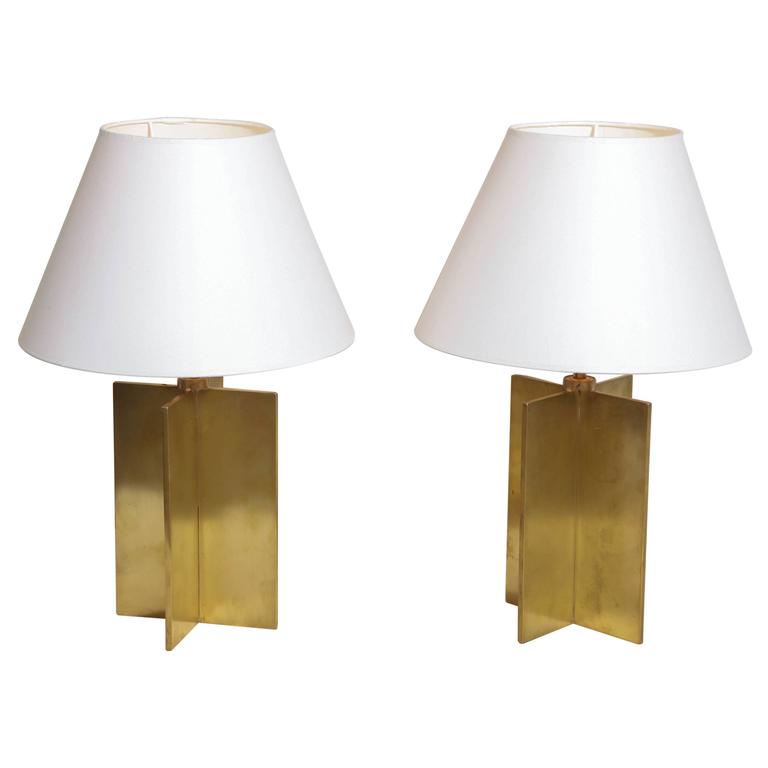 “I love these lamps for the simplicity of their shape and the elegance of their proportions and materials.” 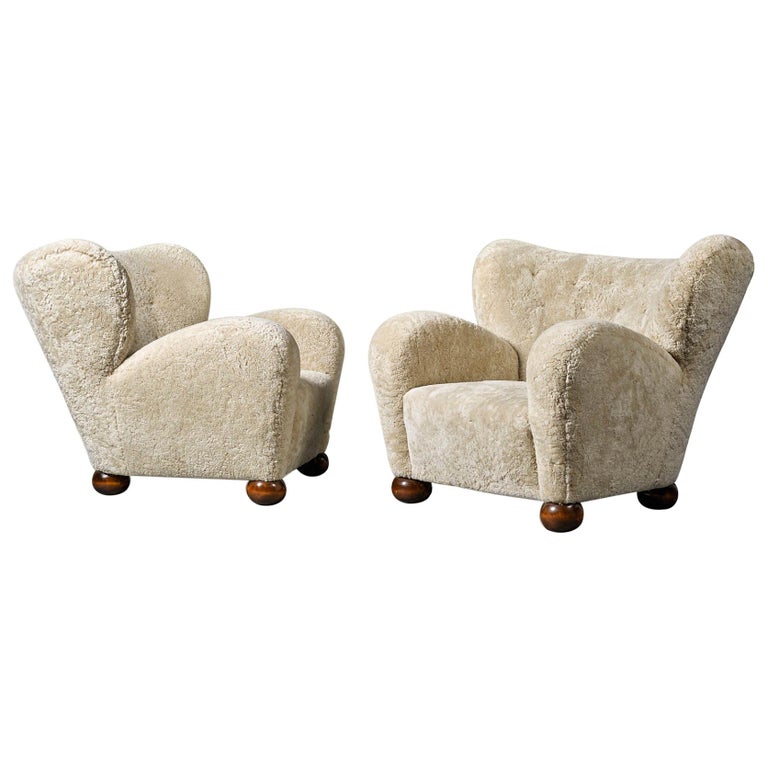 “These chairs look like they have open petals, inviting you to sit down. I imagine the petal will then close, not letting you escape.” 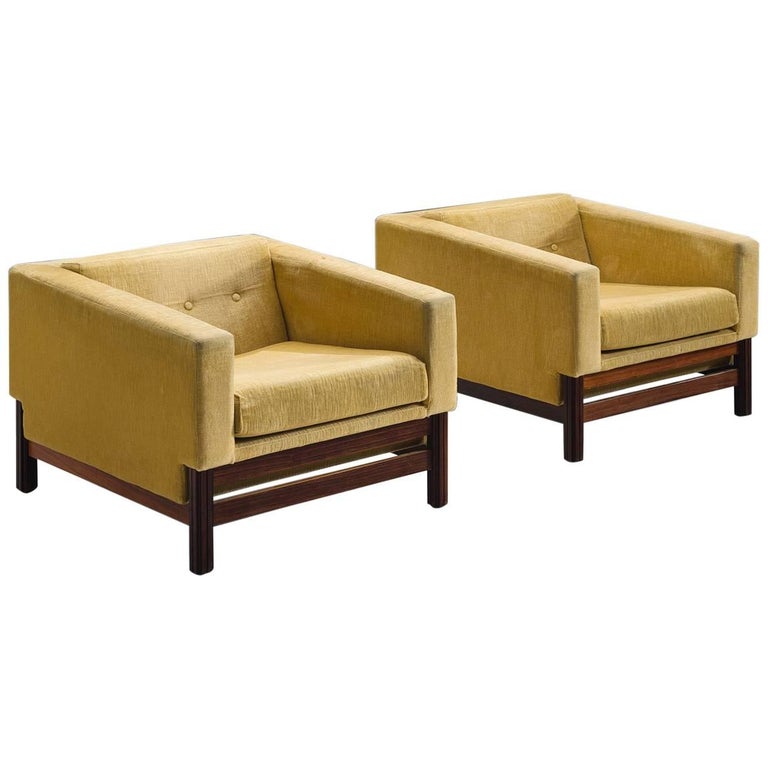 “The cubic and stiff-looking volume of these seats would be nicely juxtaposed with softer decor.” 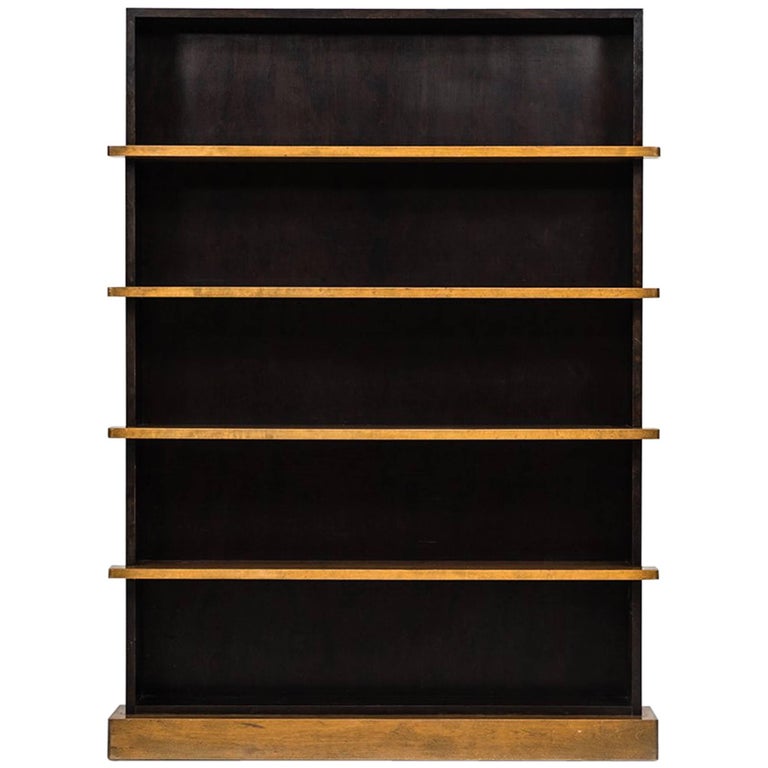 “The contrast between the black background and the golden details dresses up this piece.” 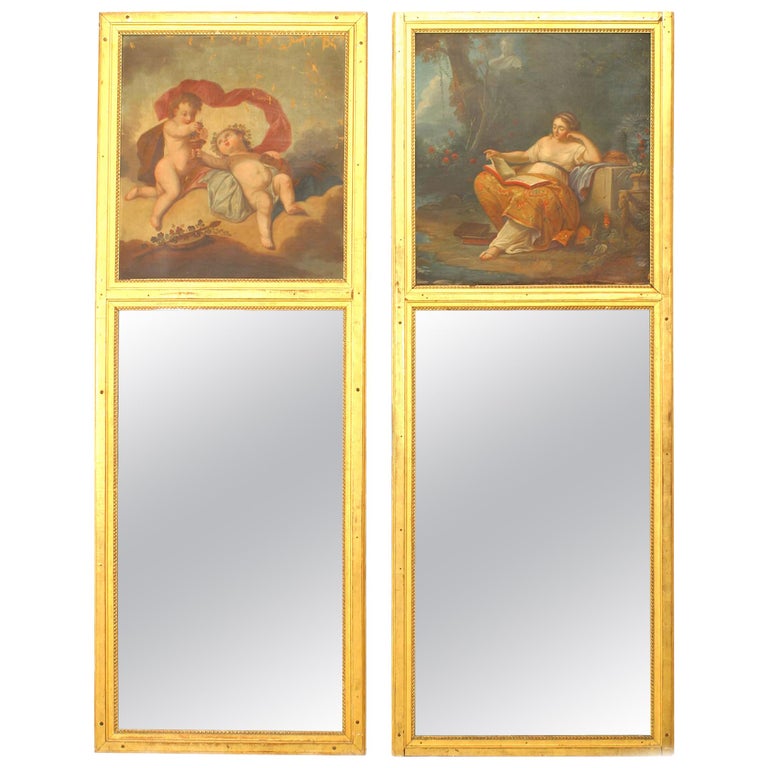 “Classicism, proportion, simplicity and pleasant paintings — this pair of trumeaux has it all. I find them to be disconcertingly magical.” 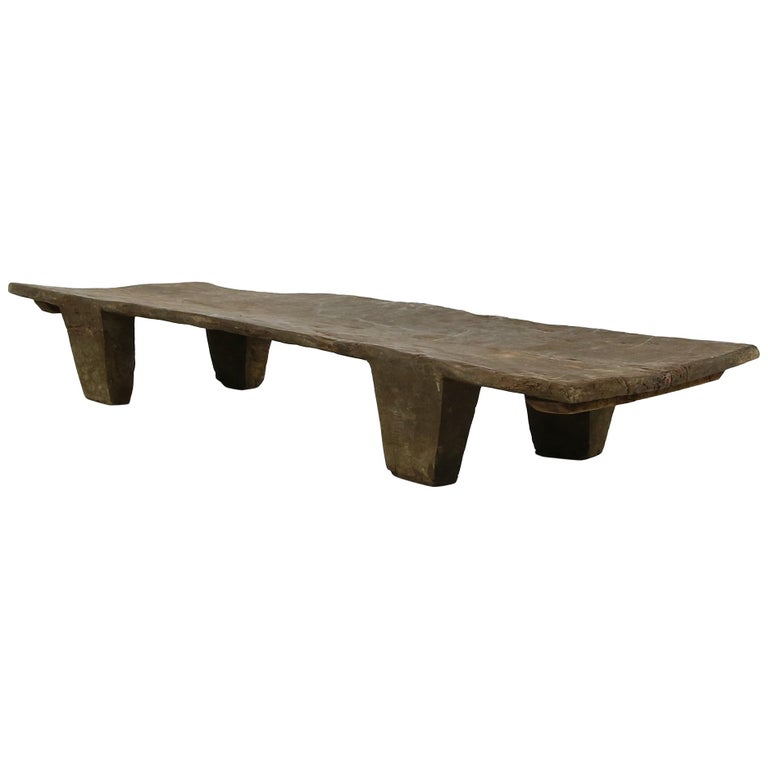 “This unique bench has a wabi-sabi style I love.”