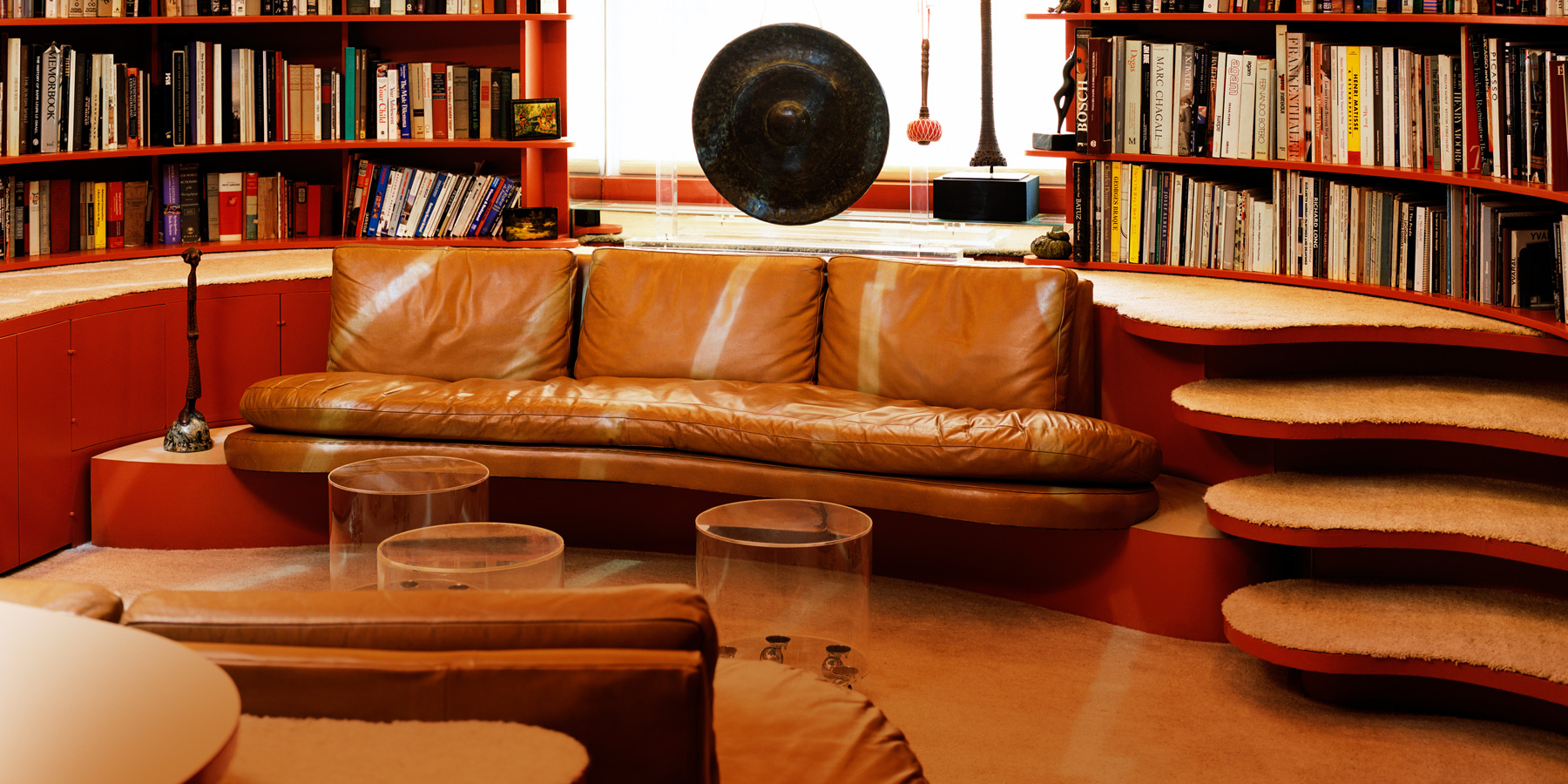 The author reflects on the formative years she spent living in an iconoclastic Manhattan apartment designed by Paul Rudolph, the modernist master who served as the chair of Yale’s architecture program. 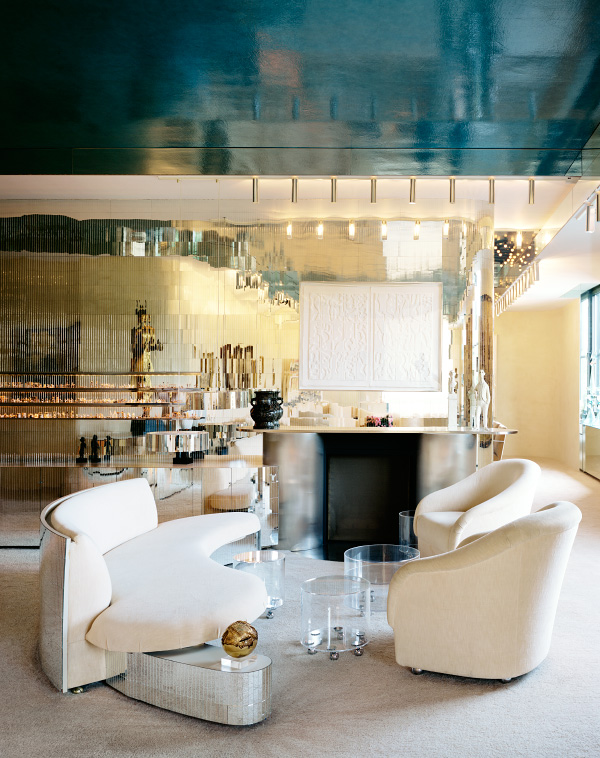 In the early 1970s, when I was eight years old, my family moved from a large Tudor house in the New York suburb of Scarsdale to a Paul Rudolph-designed apartment on the city’s Upper East Side. And from that time until the apartment was recently sold, it was part of my identity. It wasn’t like any place in which anybody else I knew lived. Sometimes I liked that; sometimes I didn’t. For years, it seemed to me that new friends couldn’t understand me until they visited the place I called home. Although the apartment was in a formidable 1917 building designed by Warren & Wetmore (the firm responsible for Grand Central Terminal), Rudolph had removed all vestiges of a pre-war sensibility — crown moldings, parquet floors, narrow hallways — and transformed the traditional layout into his concept of a modern, minimalist urban home.

The same oatmeal-colored, low-pile carpeting that covered the floors extended to the walls, which Rudolph gently curved (no right angles), and he had many of the custom furnishings built in and upholstered in a soft velour or made of white Formica. The apartment was both very designed and very practical — except that someone had to regularly vacuum the walls. Indeed, there was a uniformity that visitors loved, but that I, at least initially, found extremely disorienting.

In the center of the apartment was our playroom, created from a series of tiny maid’s rooms whose walls Rudolph blew out. I was fascinated by the tape on the room’s many windows, purple and orange swirls created to mask the view of the gray buildings next door; Rudolph was inspired by a visit to post-war Japan, where people had decoratively taped together broken glass shards to use as windows when pristine panes of glass weren’t available. Besides the windows, the room was otherwise dominated by two never-used beds with heavy orange spreads (designed by Rudolph himself), two large white-plastic egg-shaped chairs (the only furniture from the apartment that I have held on to) and a pair of gray-metal wheeled cubes (used as both coffee tables and file cabinets). 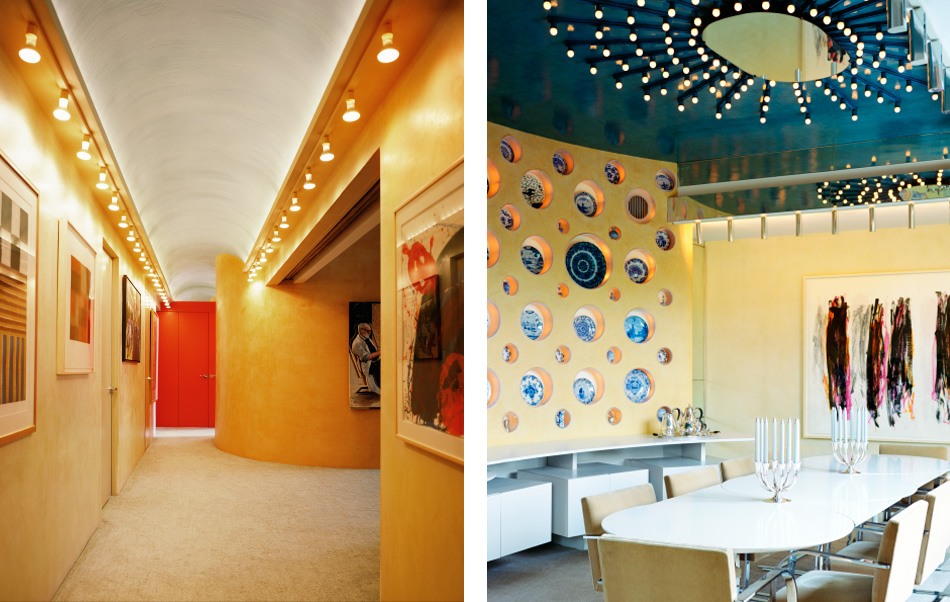 Left: Rudolph obliterated all vestiges of the apartment’s original pre-war layout. Here, a formerly dark, narrow hallway leads to a playroom (unseen but accessed through the opening on the right) that had been carved out of a series of small maid’s rooms. Right: The curved wall of the dining room sports lighted niches that displayed the family’s collection of Delft pottery.

Of course, by the time I was nine, the apartment had become my new normal. When my parents gave parties, I led tours pointing out the mirrored mosaic tiles that Rudolph used to form numbers on the kitchen cabinets (ideally, we would know that the flour was in cabinet 12; the cereal in 22) and the Jean Arp relief mounted on the oval library’s ceiling, which was painted a deep orange where it wasn’t mirrored (the ceiling, that is, not the Arp). Then there was my parents’ extensive collection of Delft pottery, displayed in lit circular niches worked into one curved wall of the dining room.

It wasn’t like any place in which anybody else I knew lived. Sometimes I liked that; sometimes I didn’t. For years, it seemed to me that new friends couldn’t understand me until they visited the place I called home.

Not only had this unconventional place come to feel normal to me, I now felt vaguely sorry for people who lived in traditional apartments with heavy drapes and even heavier furniture, which I had been told by my forward-thinking mother made no sense in the modern age. At the same time, however, I envied the girl who lived upstairs, with her pink four-poster bed piled high with multitudes of stuffed animals. My sleek, streamlined bedroom wasn’t a space that lent itself to the self-expression of a pre-teen girl. On the upside: I never argued with my parents about the color I wanted to paint my walls or the posters I wanted to hang on them because it never completely felt like my space. 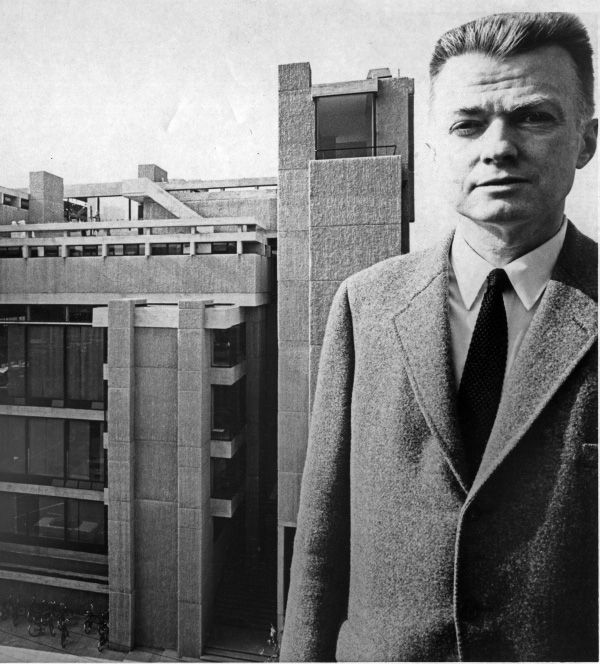 The architect, then the chair of Yale’s School of Architecture, posed across from his Art & Architecture Building, which made the cover of every major design magazine when it was completed in 1963. Photo courtesy of Yale University

My mother had met Rudolph in the mid-1960s, when she went to hear him lecture at Yale, where he was the chair of the architecture school, and she became entranced by his belief that life can and should be enhanced by creative design. A few years later, when my father decided he’d had enough of the daily commute from Scarsdale, my parents found an apartment in Manhattan and asked Rudolph to design their new home.

At that point, the architect’s life had undergone some dramatic changes. As recently as 1963, when his Brutalist Art & Architecture Building had been completed at Yale, Rudolph had been a darling of architecture critics, admired for his low-slung beach houses in Sarasota, Florida, and his unique take on the International Style. By the late ’60s, however, the world — both inside and outside the field of architecture — had changed dramatically. “The Vietnam War, the free-speech movement, the military-industrial complex — in sixty-nine it all flared up in the architecture school,” explains Robert A.M. Stern, the current dean of Yale’s architecture school and a student of Rudolph’s in the 1960s.

Rudolph had left his position at Yale in 1967, and his once-beloved building — which had received, among other accolades, an Award of Honor from the American Institute of Architects the year it was completed — had become a lightning rod, maligned by students and faculty as oppressive. In June of that year, Rudolph’s building “burst into flames,” as Stern puts it, and although allegations of arson never came to anything, suspicions remained. The gutted Art & Architecture Building received a renovation, but little effort was made to restore it to anything resembling what Rudolph had designed. The architect wouldn’t set foot on the Yale campus for decades. 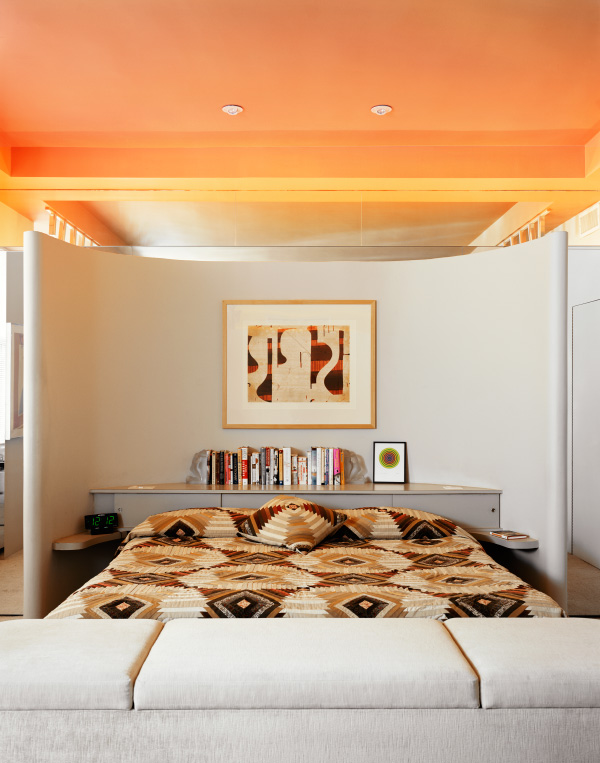 The author’s parents’ bedroom includes another one of Rudolph’s curved walls, this one appearing to embrace the bed and float in front of its mirrored backdrop.

My parents, however, didn’t care about any of that; they were simply saddened by the fact that Rudolph’s commissions in the United States had started dropping off. (He was building more and more in Asian cities, including Hong Kong and Singapore.) My mother was offended on his behalf. She and he had become friends, and I remember his presence at family dinners: the conversations about where to place whatever artwork my mother had just bought, Rudolph delivering advice in the slight twang of his Southern youth and occasionally directing a twinkling eye in my direction.

I was oblivious to the fact that I lived in something of a landmark, and a potentially polarizing one at that. Then I arrived at Yale as a freshman in the early ’80s, and the ongoing controversy surrounding Rudolph and his Brutalist style made me uncomfortable, though whether it was because I felt disloyal to Rudolph for not defending the Art & Architecture Building or embarrassed around my peers for loving the apartment in which I’d grown up, I still don’t know. Needless to say, I had never felt brutalized by my home.

By my junior year, Rudolph’s legacy was being reassessed. When a group of students invited him back to give a talk in 1985, says Stern, he came. From then until his health failed a decade later, he made regular trips back to New Haven, although always refusing to discuss the Art & Architecture Building. Rudolph died in 1997, 11 years before the building was renovated by Gwathmey Siegel Kaufman Architects at a cost of $126 million. When it reopened a few years ago, Yale rechristened it Rudolph Hall. “People are beginning to see that he was a great architect who was the victim of historical circumstances,” says Stern. 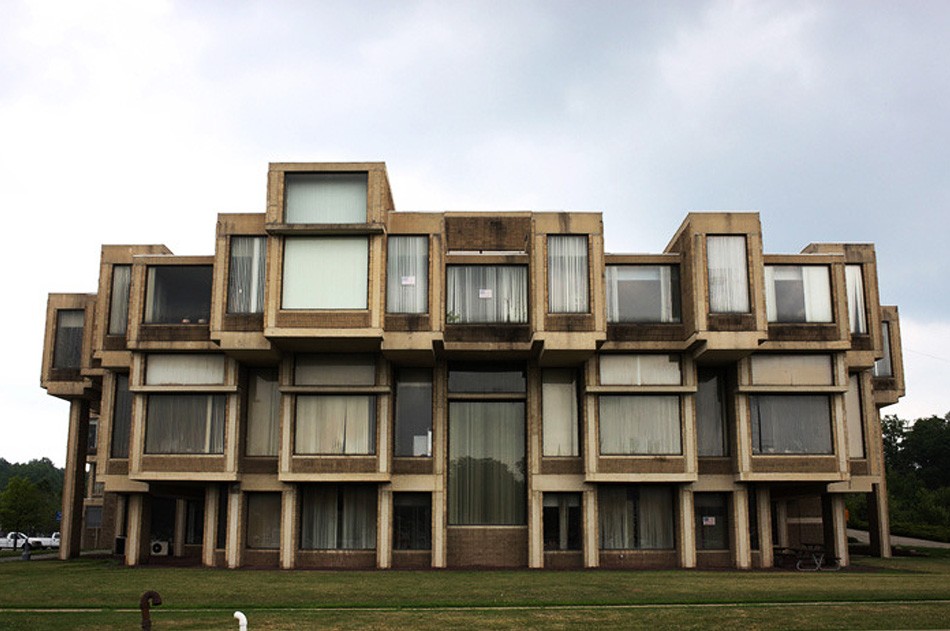 Photographer Chris Mottalini traveled the U.S. in 2007, documenting Rudolph buildings on the verge of demolition and eventually compiling them in his 2013 book After You Left, They Took it Apart. Included in it is the Orange County Government Center, in New York, which was recently granted a reprieve from the wrecker’s ball and is slated for renovation. 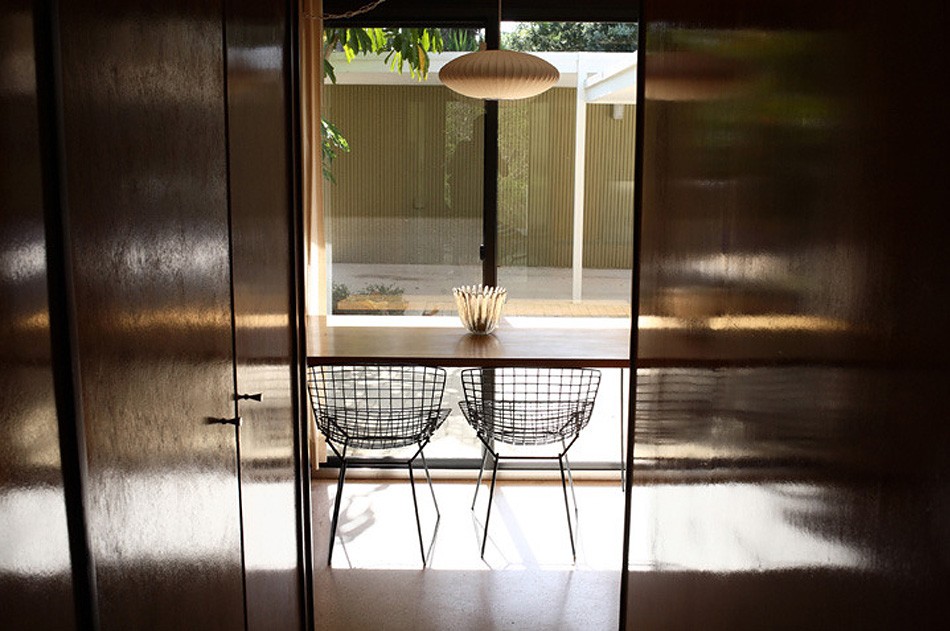 Rudolph’s Cohen House, built in Sarasota, Florida, in 1952, is still standing — and, in fact, is on the market. 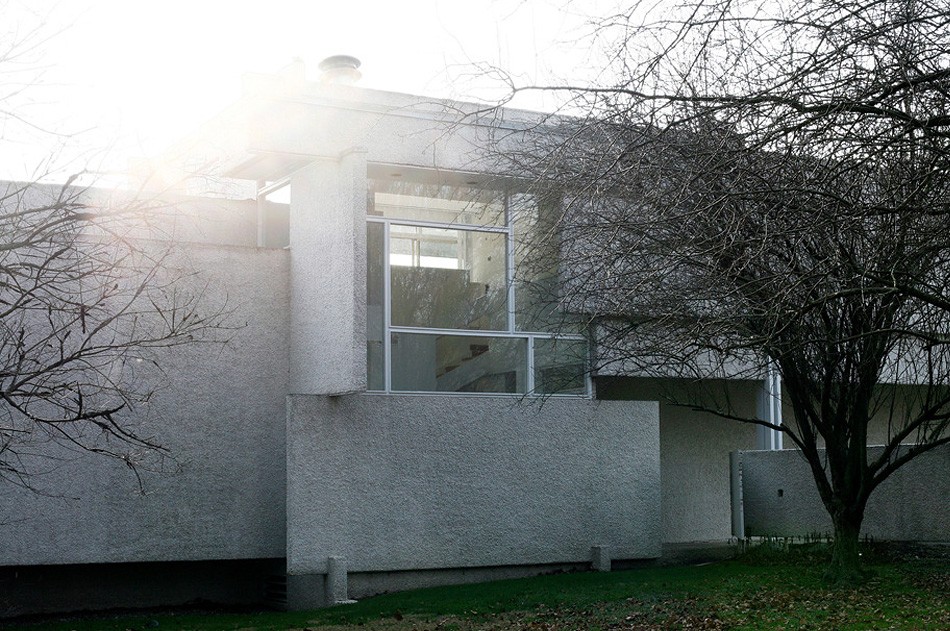 Mottalini photographed Rudolph’s 1972 Micheels House, in Westport, Connecticut, before it was demolished in 2007. 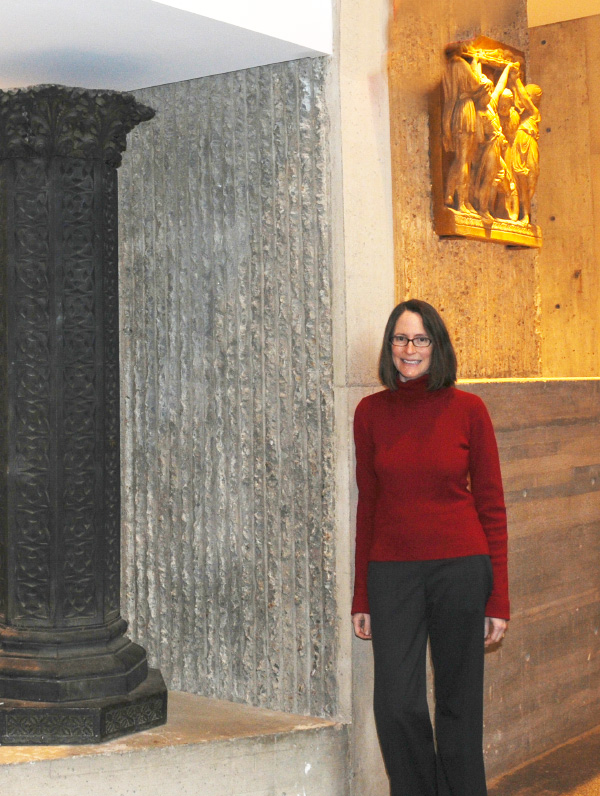 The author, a senior editor at the Yale Alumni Magazine, poses inside Rudolph’s Art & Architecture building. Photo by Marilyn Roos

I’ve come across a few articles lately on how childhood rooms, or childhood homes, leave their mark. A review of an exhibition at New York’s Jewish Museum discussed how the artist Elaine Reichek re-created her 1940s Ethan Allen bedroom (“1776 Collection”) as one way of showing, literally, where she came from. And journalist Susan Chira recently wrote a piece for the New York Times about growing up in a modernist house in the suburbs, and the sense of mourning she felt when she heard it had been torn down. Striking even closer to home is After You Left, They Took It Apart, a new book of photographs by Chris Mottalini that features Rudolph structures that have been demolished because they were in sorry shape (modernism is expensive to maintain) or deemed too modest for their valuable suburban acreage. “The majority of people who lived in, or came into contact with, Rudolph houses loved them,” says Mottalini, adding that after shooting his first Rudolph residence, he became “fascinated with the way sunlight moves through his rooms, transforming them and bringing attention to angles and surfaces. This seems to be the unifying theme of his work.”

So, what’s left of my childhood home today? I’d heard that the new owners intended to preserve elements of Rudolph’s design, but they’re free to do what they want since New York’s landmark laws don’t protect private residential spaces. As for me, I have those egg chairs — not to mention an abiding aversion to chintz. And I hold on to the knowledge that I was lucky to grow up in a work of art, to experience architecture in a visceral way, and to appreciate just how special “different” can feel.

These days, my husband, children and I are in the process of moving into a new home in our Connecticut town. There is no question that my aesthetic has been informed by Rudolph — I like clean lines and less stuff. But I’m the first to admit that our home, a 100-year-old Colonial with lovely moldings and hardwood floors, has none of the iconoclasm or design drama of the apartment of my youth.

But, unlike me, my children are getting to choose their own wall colors and put up (almost) any posters they please.