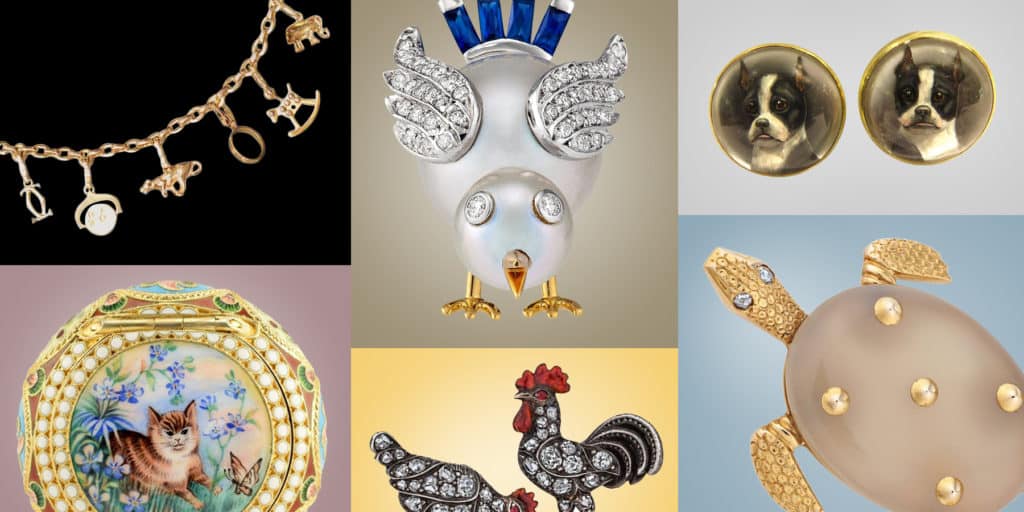 Even in jewelry form, our furry, feathered and finned friends have the power to delight.

Pets are pleasers, and whether they walk, swim or fly, their very presence in our lives makes for sunny days and happy smiles. Wearing jewelry, novelty pins or retro pieces that feature our favorite felines, caring canines and heroic horses can show off our allegiance to these loyal creatures. The popularity of animal-themed jewelry goes back centuries, and superb pieces abound for the discerning collector. Whether its maker is anonymous or from a distinguished house such as Van Cleef & Arpels, each item in this brisk roundup of pleasingly bejeweled animals reminds us that pets looks best not just by our side but sometimes even closer to our hearts. 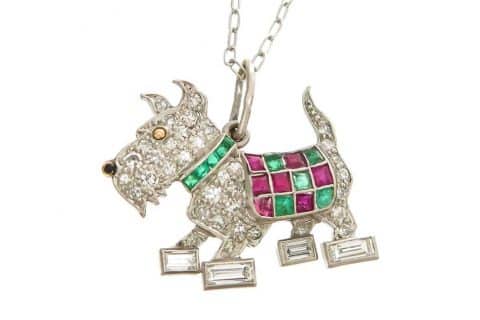 January 16, 2017This darling terrier is well turned out indeed, with a ruby-and-emerald plaid coat and diamond-baguette paws. In 1936, the Scottish terrier was the third-most popular breed in America. A few years later, FDR was presented with a Scottie, whom he named Fala, giving Americans cause to smile throughout the Depression and World War II. The continuing Fala mania in the years after the war led to the addition in the 1950s of a little Scottie to the Monopoly board game. 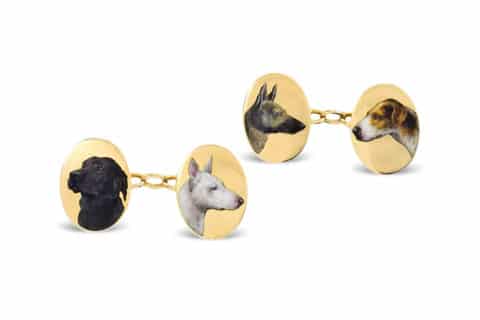 Sporting paintings often feature dogs, and collectors of the genre tend to be known as much for their love of canines as for their love of art. Hunting dogs and their owners have a special bond that finds expression in accessories for the well-heeled gentleman, with cufflinks high on the list. Here, superb enamel work on 18-karat gold depicts both sporting and herding dogs. 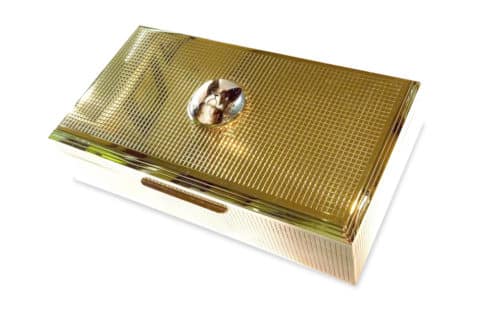 Reverse intaglios, more commonly known as Essex crystals, are like little time capsules. These preserved portraits — which had their heyday in the middle of the 19th century — were typically enamel on ivory or copper, backed with foil or mother-of-pearl and covered by a rock crystal dome. French bulldogs (distinguished from closely related breeds by their bat ears) are known for clownish behavior, although the one on this large box has been captured in a rather somber mug shot. 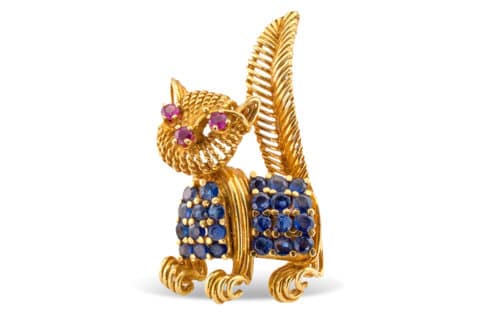 For some growing up in the 1960s, watching cartoons on TV was endlessly entertaining. Top Cat, Tom and Jerry and Felix the Cat offered feline mayhem and amusing antics. Tiffany & Co.’s playful brooch from the period captures the goofy fun of the cartoons with its bonny gold-wire tail and ready-to-skedaddle paws. But there is a touch of class, too, in the critter’s sapphire coat and ruby eyes. 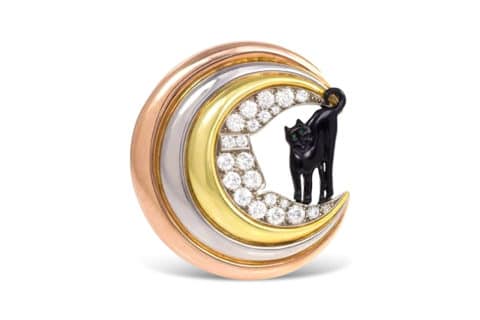 What is it about cats and the moon? They may be low to the ground, but their built-in lunar antennae cause them to do all sorts of zany cat things. Black cats in particular caused a pileup of myths and superstitions. But the ebony enamel kitty of this 1940s brooch is neither fearsome nor predatory, and it seems quite content perched on this alluring gold crescent moon. 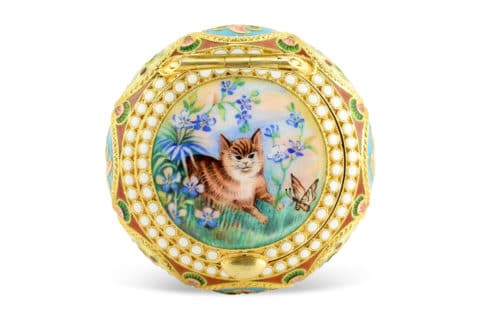 A tabby surrounded by summer flowers and butterflies is the endearing centerpiece of this ornately enameled box for pills or pastilles. The innocence of the sweet-faced kitten offers a cunning contrast to the mature craftsmanship of Nikolai Alekseev, the Russian artisan who made this piece at the turn of the 20th century. 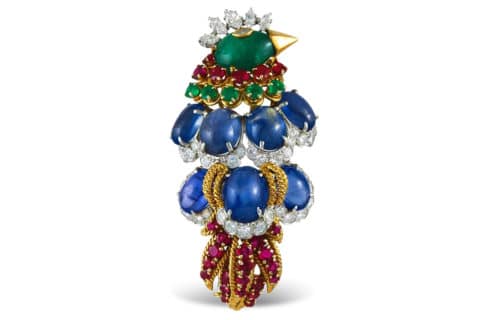 Although David Webb consulted many reference books when it came to depicting animals and motifs from other cultures, he never sweated the details. Hence this fantasy bird, surely among the most gem-saturated in his animal kingdom, with its marquise-cut-diamond crest, double-strand collar of emeralds and rubies and proud chest of cabochon sapphires. 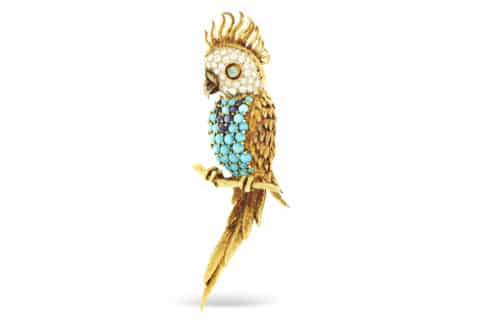 Cockatiels are family birds who prefer to roost near their owners. Members of the parrot family, they are sweet, are known to enjoy watching television and can be taught to talk or sing. Hammerman Brothers, an American firm established in 1946, captures the elegant birds’ gentle nature in this pin, whose largely turquoise bib and gold-crest feathers give it a suitably dignified bearing. 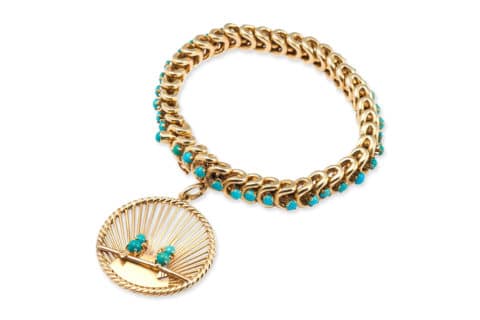 There are many lessons to be learned from lovebirds. They mate for life. They do better in pairs than flying solo. They generously share food with one another. They do not like chocolate . . . hmm, perhaps this is where human lovers part company with our feathered friends. Nonetheless, this endearing lovebird charm bracelet is a perfect present for ornithologists and chocolate aficionados alike. It’s also an appropriate motif for Van Cleef & Arpels, a house built on a foundation of love and romance. Perched against an openwork back, these stylized birds swing from a chain ornamented with cabochon turquoise. 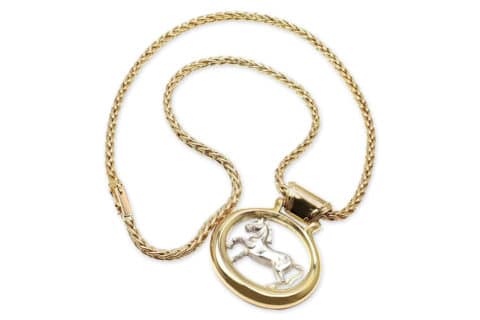 The horse has always been central to Hermès, going back to the house’s 1837 beginnings as a maker of superbly crafted leather harnesses. Today, the company demonstrates its excellence in all sorts of luxury goods, and the horse, tethered to a carriage, is its well-known logo. The equine in the pendant shown here is majestic, rendered in white gold in a surround of yellow gold and suspended from a spiga, or wheat, gold chain. 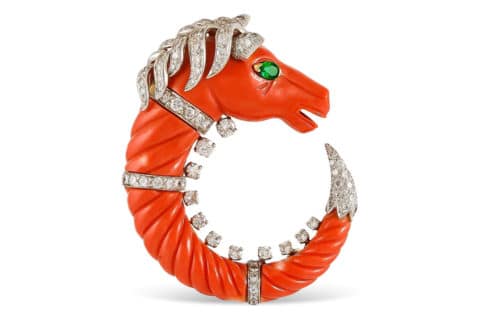 David Webb was crazy for coral, and he made a number of carved-coral animals, including several horses. The one in this stylized circle pin, with its glistening diamond mane and emerald eyes, reveals Webb’s mastery in making appealing animal jewelry. 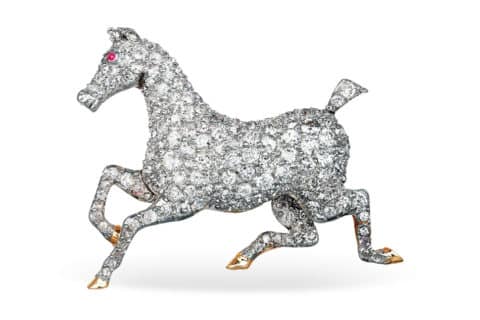 Animals portrayed in diamonds become for the wearer elegant emblems of ownership and passion. For the equestrian, horse-themed jewelry is a perennial favorite, and this Edwardian brooch of old European-cut diamonds is a superb example of the form. 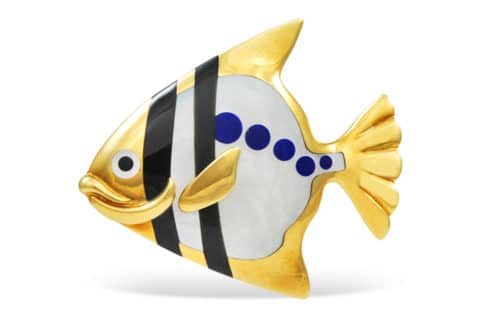 Beginning in the 1950s and continuing into the ’70s, women collected what were originally referred to as scatter, or novelty, pins in the shape of cartoon-like animal images. Many of the fine jewelry houses produced these cute, fun creatures, including Tiffany & Co., whose jaunty angelfish, with its telltale stripes, is brightened by a trail of blue enamel bubbles. 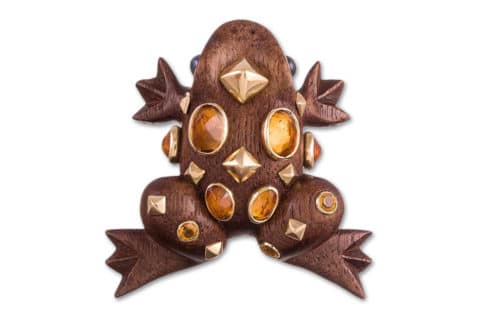 This amiable little walnut-wood frog radiates happiness, an emotion underscored by the warmth of its carved citrine insets and twinkling cabochon sapphire eyes. Here’s one little fellow who wants to be your very own pet. 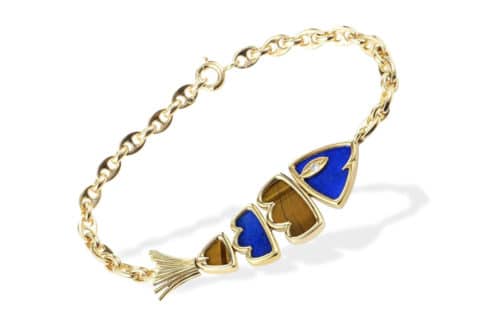 Fish have an enviable flexibility as they dart and glide about in water, a fact that Van Cleef & Arpels emphasizes with its use of alternating tiger’s eye and lapis lazuli panels. The chain of this charming bracelet carries on the marine theme. 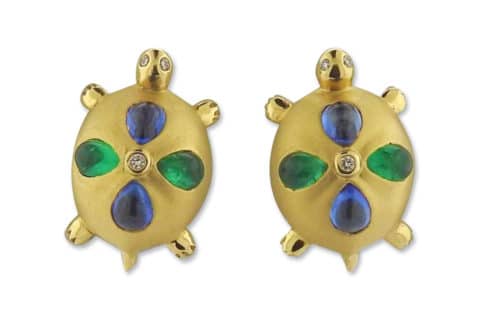 Say “pets,” and most people think of dogs or cats, yet many households have cherished turtles. These reptiles can live upward of 25 years in real life, but as pieces of jewelry, they’re timeless. That is also a good characterization for the gems made by Temple St. Clair, with their clean, modernist look and signature cabochon stones.