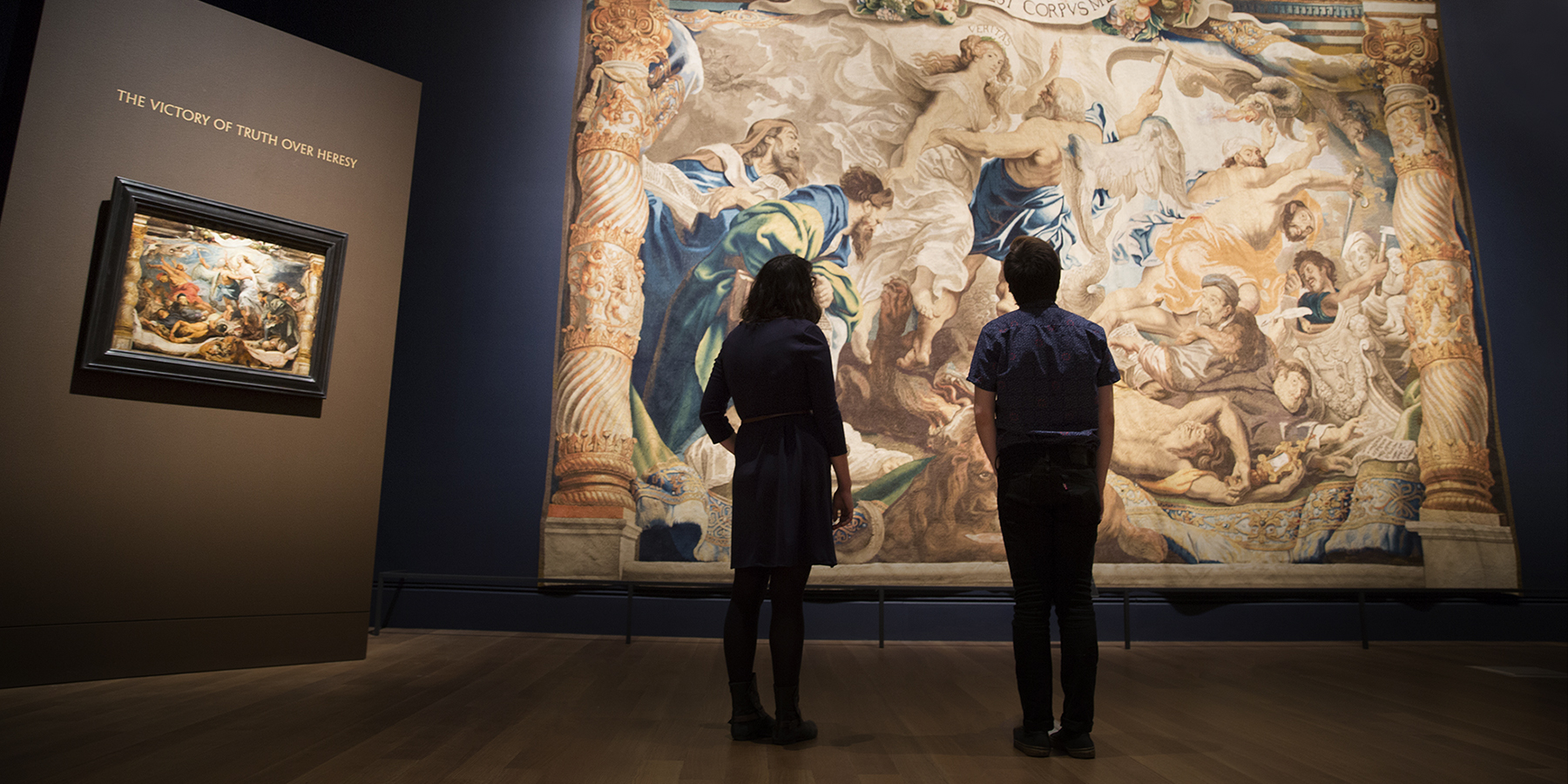 Currently on view at the Getty Center, in Los Angeles, a show of magnificent 17th-century Eucharistic work by Peter Paul Rubens dazzles with its depictions of sensual, Baroque beauty in both oil paint and silk thread.
DECEMBER 2014 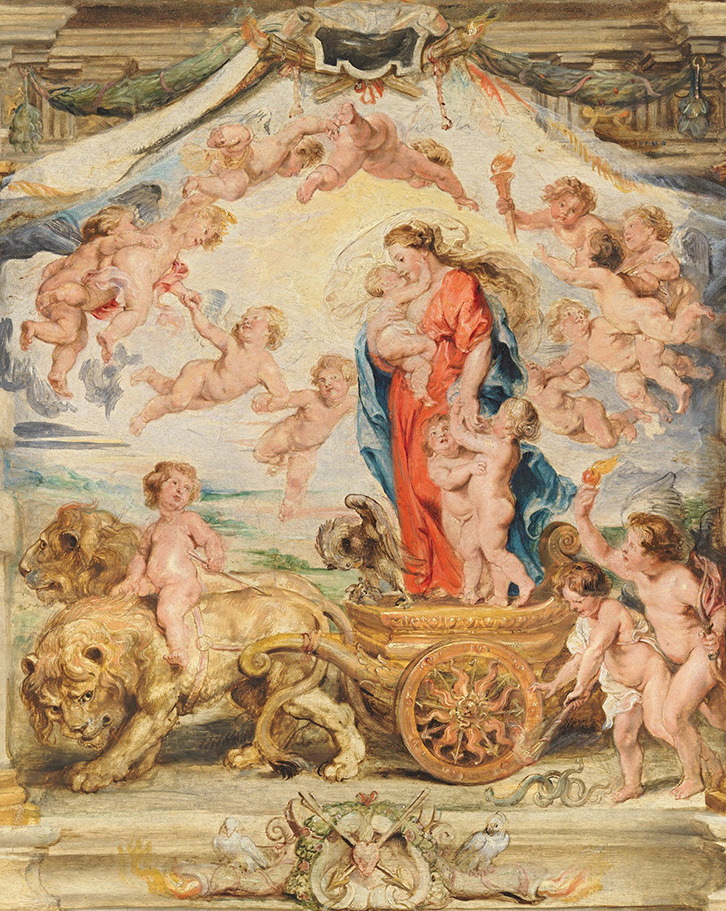 December 21, 2014The Triumph of Divine Love, ca. 1622–1625, is one of the oil-on-panel paintings by Peter Paul Rubens in the Getty’s show (image courtesy of the Prado). Top: Uniquely, the exhibition places Rubens oil paintings alongside the tapestries each inspired (photo courtesy of the Getty).

Even if you know nothing about history, art or the religion, it’s likely you know the term Rubenesque, which conjures painted images that feature full lines, brilliant colors and undulating sexy volumes, often as applied to the female form. Now, transpose those visuals, their tone and emotional impact, to a series of 20 monumental, eight-foot-tall tapestries, and you’ll have a feel for what’s on view in “Spectacular Rubens: The Triumph of the Eucharist,” a wonderful exhibition on view at the J. Paul Getty Museum, in Los Angeles, through January 11, 2015. Showing off tapestries designed between 1626 and 1632 by Peter Paul Rubens — all ostensibly celebrating the Eucharist but mostly displaying dazzling figures in rich spaces — the exhibit includes several examples of the Flemish Baroque artist’s greatest woven works. These were all made from a fabled series of his paintings by the same name, which depicts the Last Supper, when Jesus asked the Apostles to eat the bread and drink the wine (the sacrament of the Eucharist) that symbolized his body and his blood and formed a covenant of faith.

Regarded to be on a par with masters like Michelangelo, Rubens was born in Siegen, Germany, in 1577, nearly a century after the start of the Renaissance, during the wars between the Papacy and the followers of Martin Luther. The son of a Protestant lawyer, Rubens was raised in Antwerp from the age of 10 and rose to fame as a staunchly Catholic and preternaturally gifted painter who was the favored artist of Belgian, Spanish and Italian nobles loyal to the pope.

Rubens was well educated, charming and multilingual, and when he was still in his early 20s he accepted commissions in Madrid, Rome and Mantua, Italy. In Rome, he studied works not just by Michelangelo, but also by Tintoretto, Velázquez, Titian and others. As he matured as an artist, Rubens magnificently blended strange bedfellows: the influence of classical art, glorious decorative excess and religious metaphors promoting Catholicism over its rivaling sects — though you can hardly see the piety for all the sensual beauty.

The Getty’s show features this skill in four premier tapestries, six original oil sketches, or modelli, alongside thematically related works by Rubens and disciples from his workshop, revealing much about the artist, his work and times. The oil paintings are borrowed from the Prado, where the show began, and the tapestries from the Patrimonio Nacional, also in Madrid. After the Getty, the exhibition will travel to the Museum of Fine Arts, Houston, where it’ll hang from February 15 through May 10, 2015. Here, Anne Woollett, the Getty’s curator of painting, discusses the show with 1stdibs’ Marlena Donohue.

These tapestries were created after Rubens returned to Antwerp from abroad, when he’d made a name for himself.

Not just made a name for himself; Rubens writes in his letters that he is inspired, a genius. He never lacked confidence.

And Antwerp had become the hub of Catholic-versus-Protestant power struggles — on battlefields and through images.

Exactly. Queen Infanta Isabel Clara Eugenia, the favored daughter of Philip II, ruled southern Flanders for Spain with her husband, Cardinal-Archduke Albert, and they were among Rubens’s patrons. She commissioned these works.

Isabel was quite a personality. You included two paintings, not by Rubens, showing a beautiful, regally attired young Isabel and then a mature Isabel dressed as a nun after re-entering convent life following her husband’s death.

Isabel and Rubens shared much — they were extremely smart, exposed to art from a very early age, committed to the Church. She hired Rubens in 1626 to do these tapestries for the Monastery of the Barefoot Royals in Spain after her return to cloistered life.

Can you discuss the general subject for the tapestries?

The subject is the Eucharist, which, of course, Rubens does not handle in any literal way but as a creative, multi-part, visually engaging symbol.

Like The Victory of Truth Over Heresy, where truth, or Catholicism, is this opulent female in flowing drapery, entering what first looks like a festive pageant.

And the unfaithful flee at the sight of her, with tiny, fairly accurate portraits of Luther and Calvin trampled at her feet.

As he matured as an artist, Rubens magnificently blended strange bedfellows: the influence of classical art, glorious decorative excess and religious metaphors promoting Catholicism over its rivaling sects — though you can hardly see the piety for all the sensual beauty. 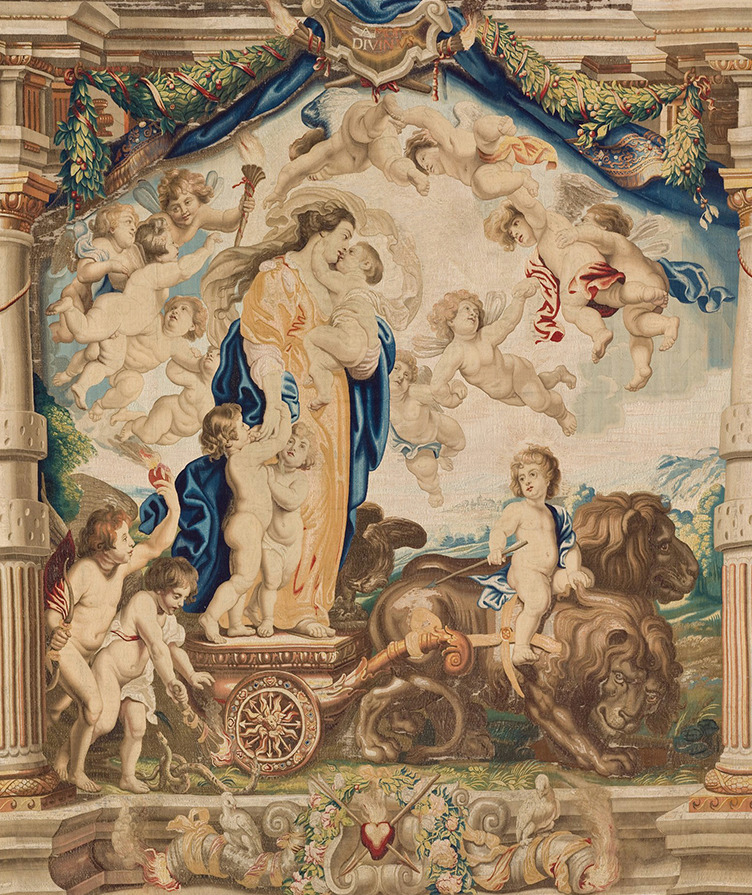 Jan Raes I, Hans Vervoert and Jacob Fobert wove the tapestry version of The Triumph of Divine Love in Brussels from 1626 to 1633. Image © Patrimonio Nacional

Theatrical compositions defined the Baroque, but seeing them transferred to literally millions of silk threads is astounding.

This series raised the bar for tapestry execution. Textile-based arts, for practical reasons, tended toward more two-dimensional concepts. Rubens offered no concessions to his weavers; he challenged them to fully capture his painterly vision. From one small area to another within an eight-foot surface, as well as from one finished piece to the next, everything, including theme, design, symbolism, color, line quality, it all had to be orchestrated. Weavers worked from the back and couldn’t even see the image as they created it.

Were these skilled weavers famous artists in their own right? I noticed names like Jan Raes I, Jacob Geubels II and Jacob Fobert.

This took inordinate skill, but projects this size could never be completed by a single person working alone. There were workshops or guilds of experts; two or three weavers — more often not known — worked on one section under the control of an entrepreneurial studio head, also a weaver, who saw to sketches, to dyes, to budgets, to work load, to quality control. Jan Raes, who you mentioned, was one of the best. 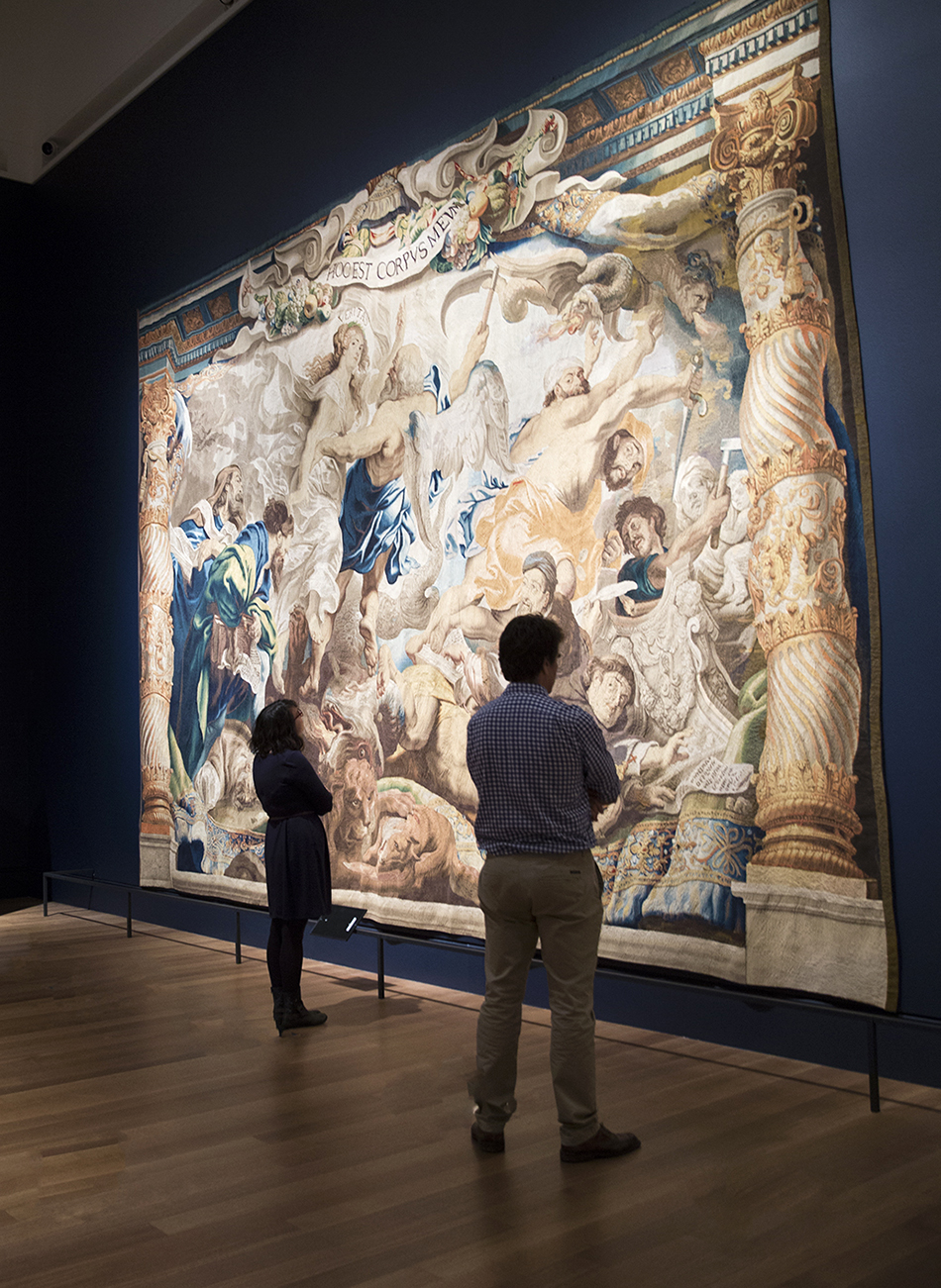 The beauty of your display is that we get to watch this fascinating transference from paint to thread.

Rubens saw this as a painter would. Tiny, foreshortened angels in each textile hold up illusionistic tapestries, opening up deep spaces filled with figures who gesture, bend, fall toward and away from the viewer. Shaded contours and large areas of lush flesh tones were unprecedented in textiles and a real challenge to weavers, who managed brilliantly.

How would these works have been displayed once they got to the Spanish convent to which Isabella gave them?

In two rows, one atop another, sometimes outdoors but always only on important holy days — otherwise they’d be carefully rolled. Rubens never saw the convent room where these were to hang; he designed the whole spatial display from Antwerp using only architectural plans.