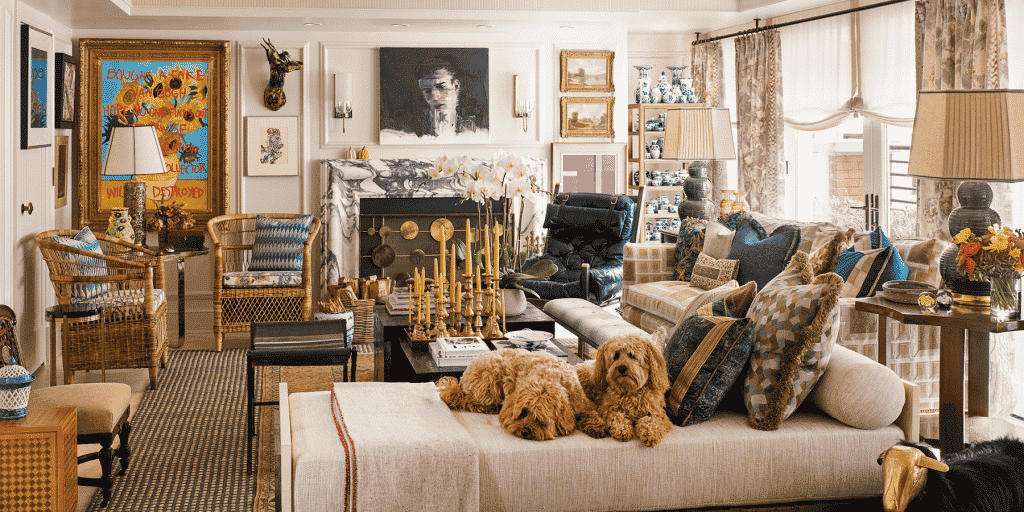 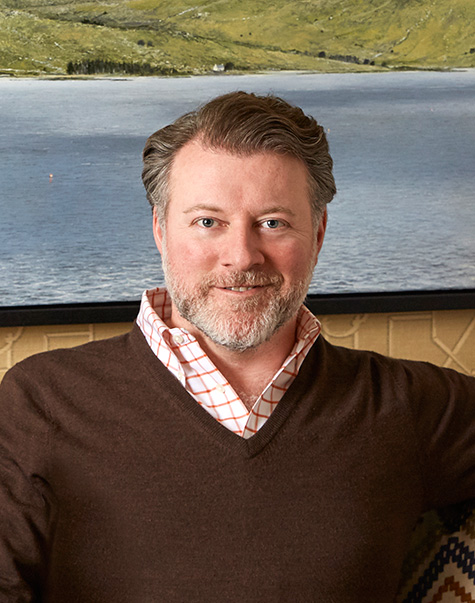 February 3, 2019“Probably the common thread for all the projects that we work on is that we really do love to do layers of things,” says designer Philip Mitchell. Top: In the salon he did for last year’s Kips Bay Decorator Show House, Mitchell found harmony in an arrangement of such disparate items as academic French paintings from the 1860s, rattan furniture and a Marie Suri firescreen from Liz O’Brien Editions. Photos by Annie Schlechter

A certain softness comes through in all the work of designer Philip Mitchell. The comfort of the materials, and the felicitous way the pieces are arranged, make you want to plop down and put your feet up, even when the room in question has all the traditional trappings — like proper moldings — that would usually make you sit up straight.

Mitchell, 43, is a Toronto native and still based in that Canadian city, but he travels often to his offices in New York City and on the Nova Scotia coast, where he also has a home. He studied at the university level for only three months, starting right away in the decorating trade at age 19; you might call it the School of Soft Knocks. He comes by his interest in the field naturally, since his mother was a decorator too. This connection may well be the reason for the sense of ease that imbues his work.

“Probably the common thread for all the projects that we work on is that we really do love to do layers of things,” he says of his residentially focused business. The neutral palette he usually employs means that he can combine beautiful objects, furniture and artworks without the result seeming stuffed to the gills.

Using just that approach and a team of around 10, Philip Mitchell Design made a big splash at two recent editions of the Kips Bay Decorator Show House. In 2015, he did the stair hall, filling it with artworks in a way that made it less of a passageway and more of an event in itself, with the whole coming together as a single tableau. 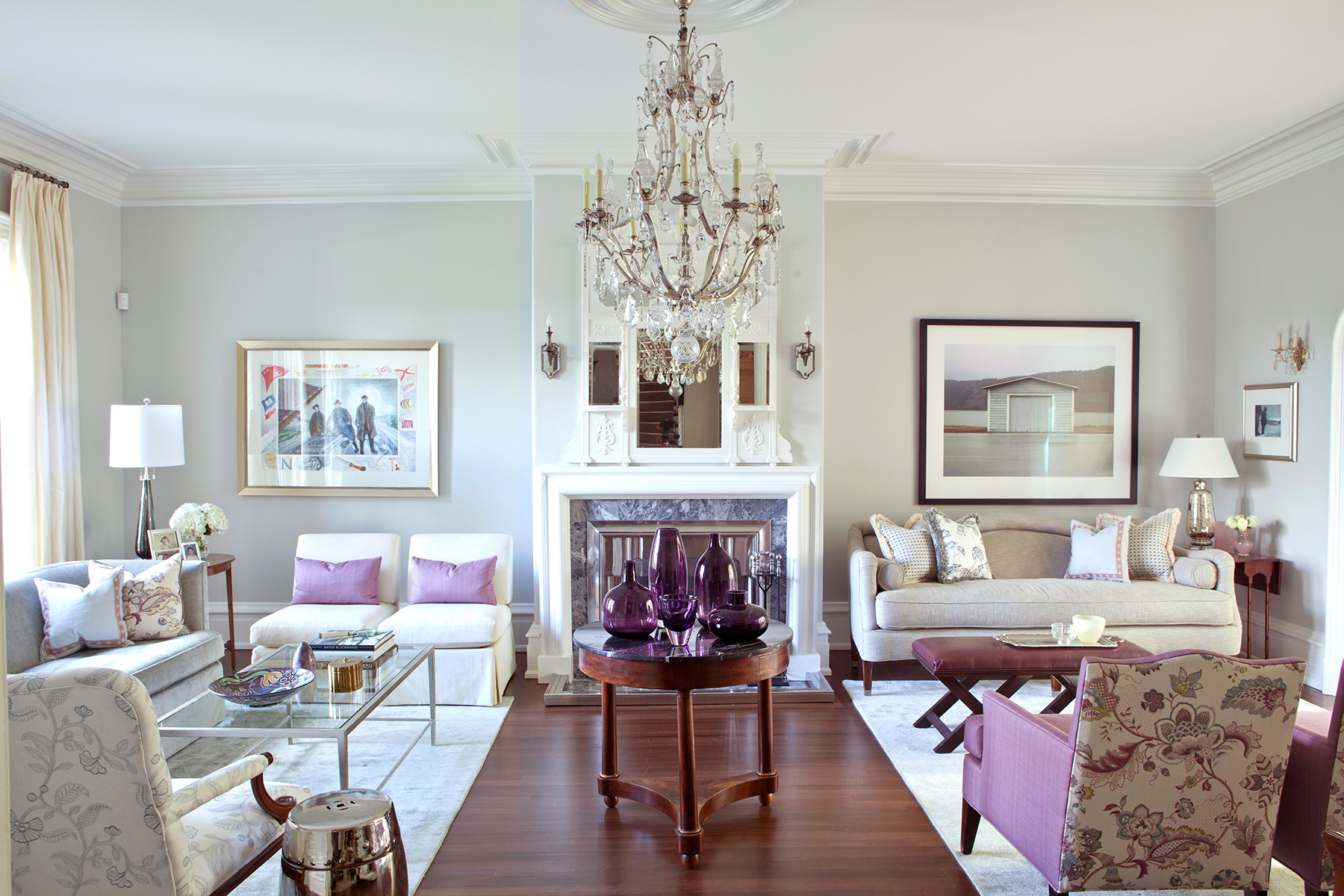 Decorating a classic Victorian house in St. John’s, Newfoundland, Mitchell subtly deployed purple — one of the homeowners’ favorite hues — in a variety of ways, including a collection of amethyst glass displayed on a French Empire gueridon table. Elsewhere, he paired Georgian armchairs with English-style pieces by Lee Jofa. Photo by Caroline Ryan

“It’s terrifying, because everyone is going through the space to decorate the rooms, and so you can’t really hang it until the last minute,” Mitchell says of designing the oh-so-central stair hall. “But it was a fantastic experience.” Having set a tone of buzzy activity with silvery toile wallpaper, he hung art of all stripes, including one of Hunt Slonem’s signature bunny paintings. A graphic Jackson Pollock–y Stark carpet and a neutral stair runner from Patterson Flynn Martin balanced each other and the scene. Mitchell topped off the look with a 1950s Venini light fixture purchased from David Duncan Antiques on 1stdibs, a frequent shopping stop for him. (Several of the artworks also came from the dealer.) 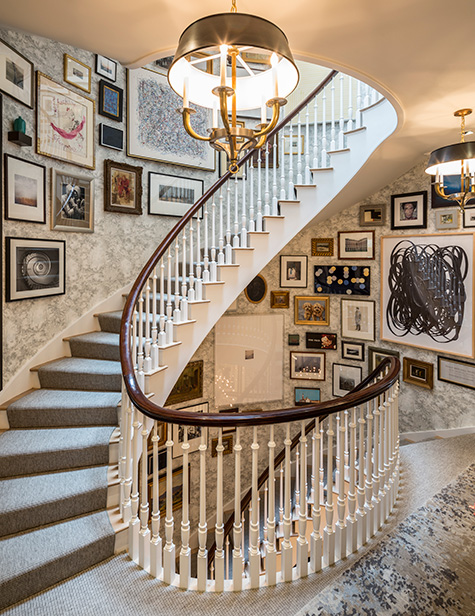 Mitchell took on the soaring, spiraling stair hall in the 2015 Kips Bay Decorator Show House, putting a silvery toile paper on the walls and a Jackson Pollock-esque carpet on the floors, then hanging a riotous array of art salon-style. Photo by Marco Ricca

Last year, Mitchell took on a proper room for Kips Bay, evoking “an old-school, historical salon where people would entertain and have great parties,” the designer says. “It’s very collected, and there’s something from every period.”

The result may be the first living room to combine Yayoi Kusama’s polka-dot pumpkins with an academic French painting from the 1860s, both appearing alongside black-and-white photography and colorful throw pillows embroidered with snakes. Not to mention rattan furniture and a floral-upholstered wing chair, set near a Marie Suri Cirque firescreen sourced from Liz O’Brien Editions on 1stdibs.

“The idea was just to show people that you can really buy what you love,” says Mitchell. “I can’t imagine a better example of a room where there are so many different styles, so many almost competing things. But altogether it reads as one place.” His dogs, Jacob and Wilo, added a fluffy exuberance to the scene when they perched on a chaise for a photo.

A designer’s own residence is always revealing of his style, and the penthouse Mitchell shared with his husband, Mark Narsansky, until its recent sale, telegraphs their interest in tailored comfort. Despite its location in an “architecturally uninspiring” 1970s building, the apartment has a great view over Toronto’s leafy residential Rosedale neighborhood. Mitchell redesigned the home, and his first step was to give it some real architecture. He gutted the space and created a barrel-vaulted ceiling in the foyer, adding a sense of scale. Then, he clad the entire apartment in panel moldings, immediately dressing up what was previously just a series of plain boxes. 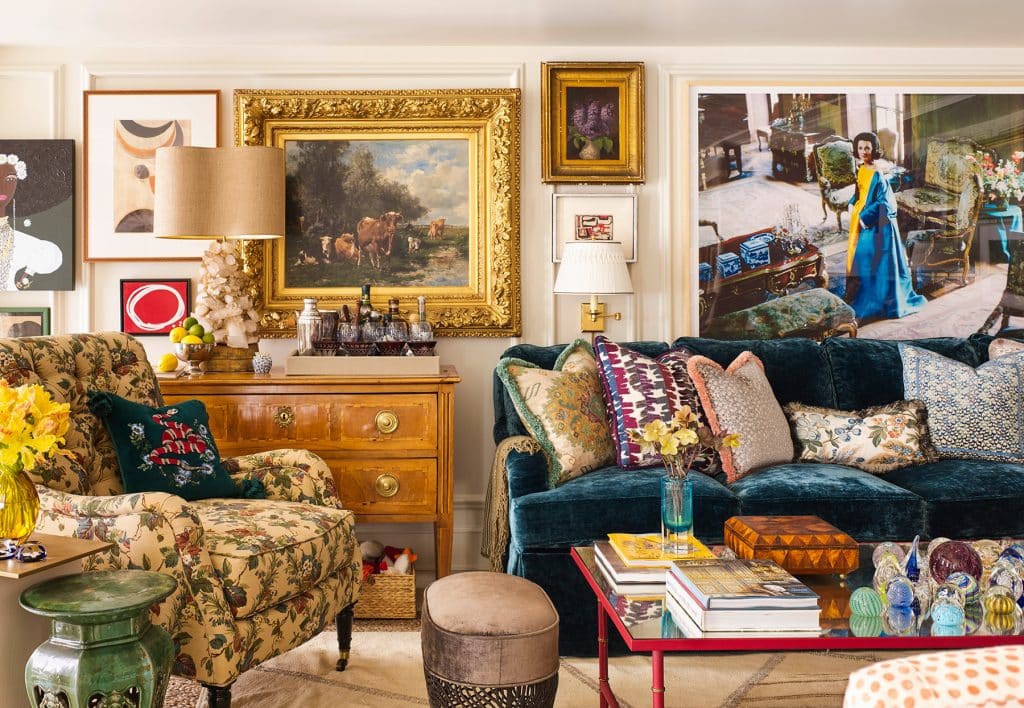 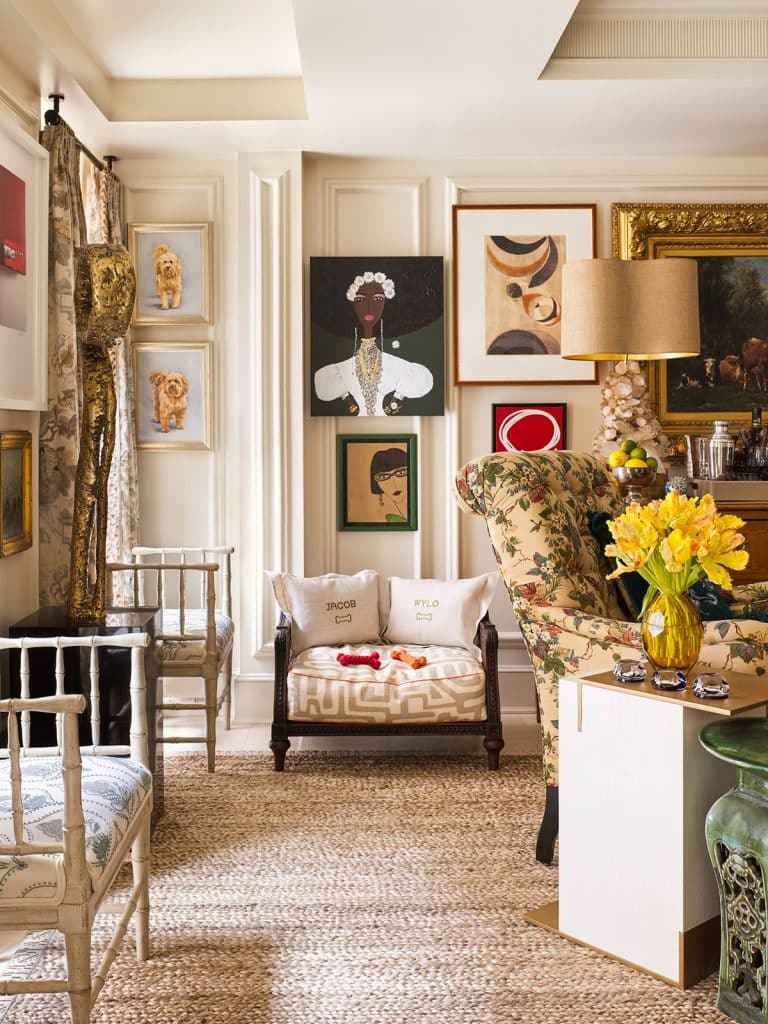 Art in the Kips Bay salon included pieces by Beth Rundquist, Rebecca Moses and Kayce Hughes. The quartz crystal Carole Stupell lamp at back right and brutalist sculpture at far left are from David Duncan Antiques. Photo by Annie Schlechter 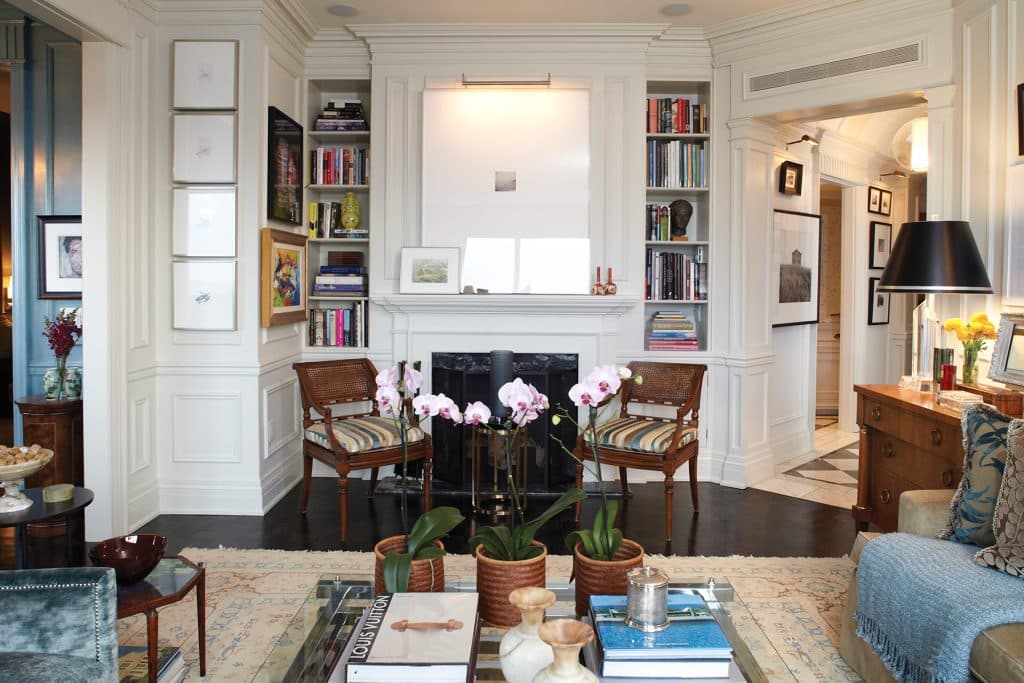 A pair of antique English cane-back chairs sit in front of the fireplace in the living room of Mitchell’s own Toronto penthouse apartment, which he recently sold. The photo above the mantel is by Paul Weeks. Photo by Caroline Ryan 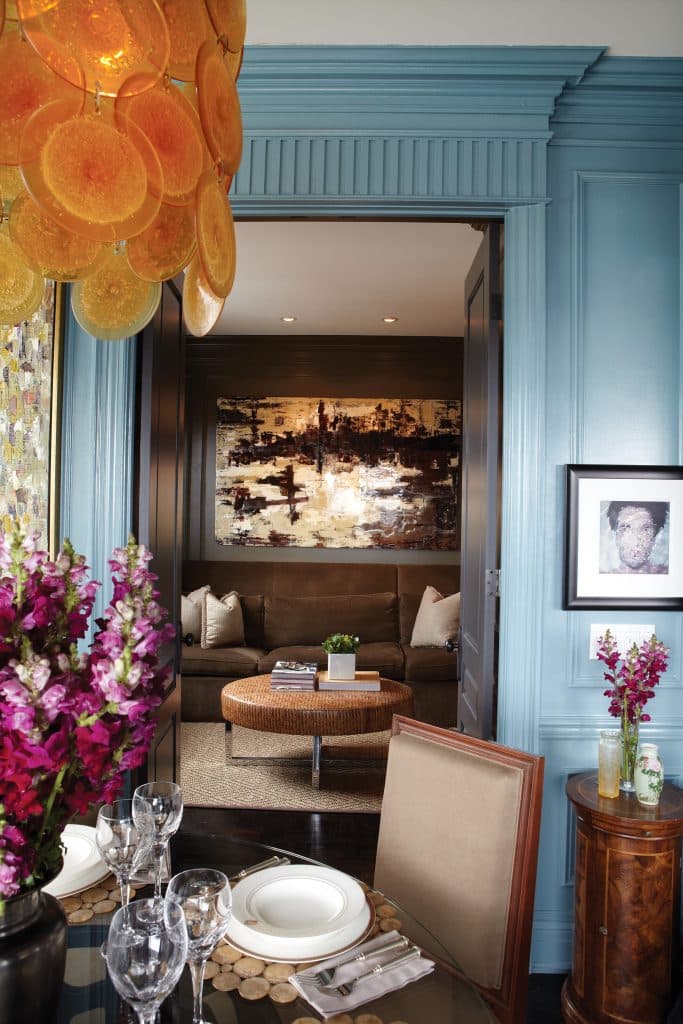 In the penthouse’s blue-walled dining room, an orangish Murano fixture hangs over an English center hall table, here used for eating, which is surrounded by antique French chairs. Glimpsed through the double doors is the den. Photo by Caroline Ryan 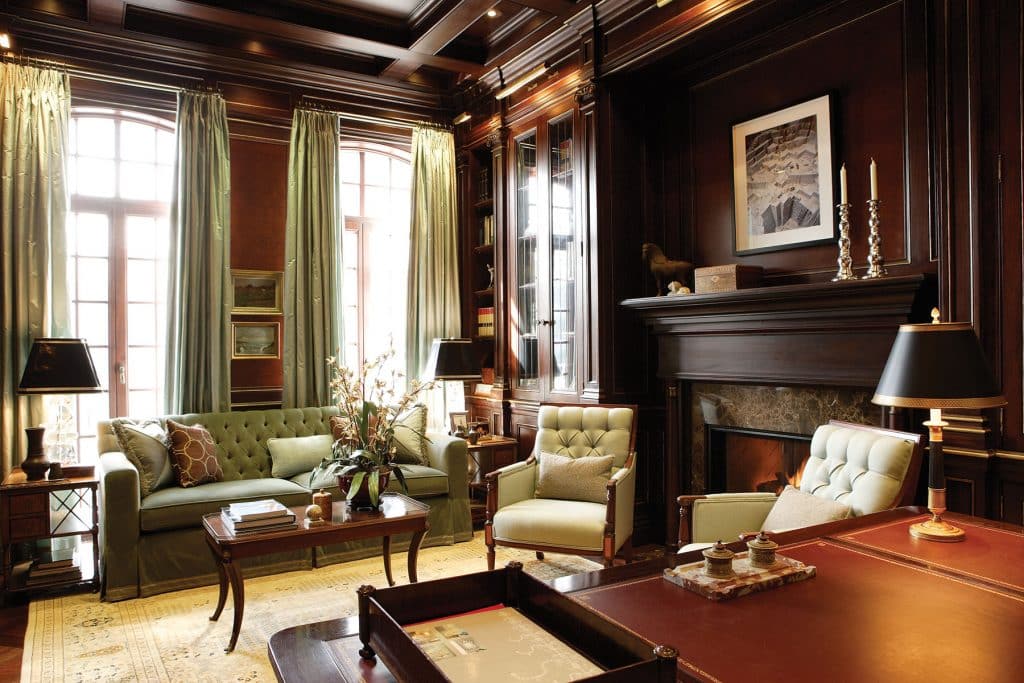 The library of a home in Toronto’s Bridle Path neighborhood features a pair of English turn-of-the-20th-century landscape paintings, an English mahogany partners desk and, over the mantel and a photograph by Edward Burtynski. Photo by Tim McGhie Photography

The dining room scheme represents a happy compromise: Mitchell prefers a lighter palette, but Narsanky likes darker hues. So, the walls were painted teal tinged with gray, which looks particularly good after 6 p.m. “We’re nighttime people in the sense that we only entertain for dinner or a cocktail party,” says Mitchell, who hung an orangish Murano fixture over the dining table for extra punch. Antique French chairs and a simple, vintage central hall table keep the room eclectic but also practical. It’s a small space that manages to feel bigger because of its humming variety. 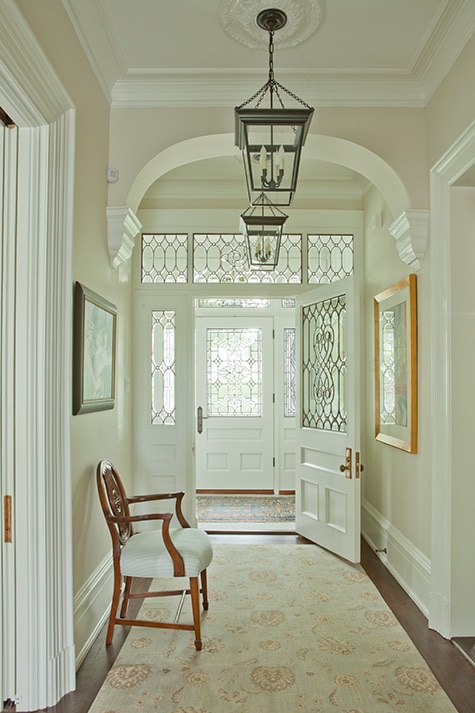 The entry hall of the St. John’s Victorian is awash in soothing cream hues, adding a touch of the contemporary to a classic space. Photo by Caroline Ryan

A home in St. John’s, Newfoundland, gave Mitchell the chance to spread out. He took a narrow Victorian with a charming stack of bay windows and doubled it in size with an addition that featured a new porch. The clients were a young family. The husband is something of a traditionalist, but the wife wasn’t willing to live in a period piece, although she liked the historic feel of the original structure. “She said, ‘We want antiques, but can we have some modern pieces too?’ ” recalls Mitchell, who naturally answered in the affirmative.

Lavender and purple, the couples’ favorite hues, were employed throughout the house to varying degrees. The master bedroom has a soft mauve on the walls, in the curtains and in the upholstery of the antique English armchairs, the ensemble serving to gently frame the greenery outside the bay window.

In the grand living room, the color is more of an accent, as in the amethyst-glass collection displayed atop a French Empire gueridon table beneath a crystal chandelier. Georgian armchairs mix with furniture by Lee Jofa, all in a winning English style but upholstered so as not to be stuffy. Case in point: the bold floral backing on two of the Jofa chairs.

Every time Mitchell turned up the volume of traditionalism somewhere, as when he restored the striking mantelpiece in the living room, he tempered it with something a bit more offhand, like the silvered Chinese ginger jar that serves as an end table. Using jars and garden stools as furniture is one of his signature moves. “It just layers the room a bit,” says Mitchell, noting this as an example of his simple-but-effective philosophy: “Adding another point of interest really helps.” 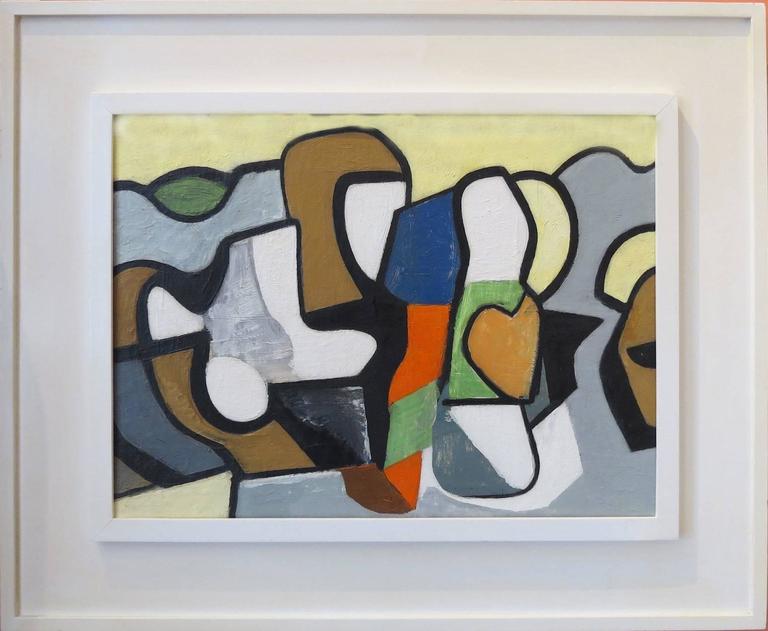 “I love the light-hearted quality of this painting by Nell Blaine, not to mention the unusual color combination she uses, resulting in a feeling of quiet sophistication.” 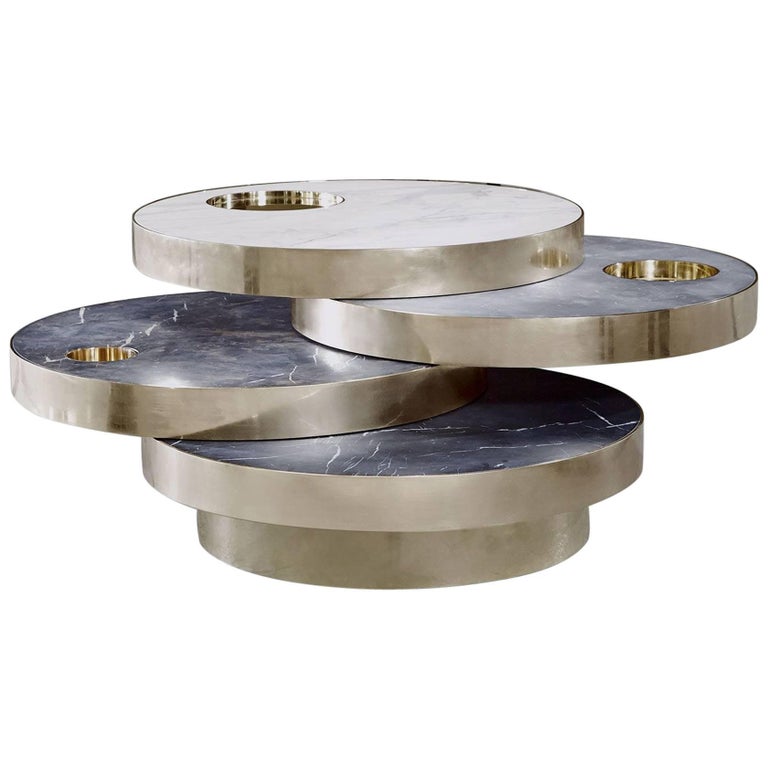 “The exacting standards of design, engineering and construction associated with this coffee table make it extremely flexible in a space while at the same time creating a unique sculptural composition.“ 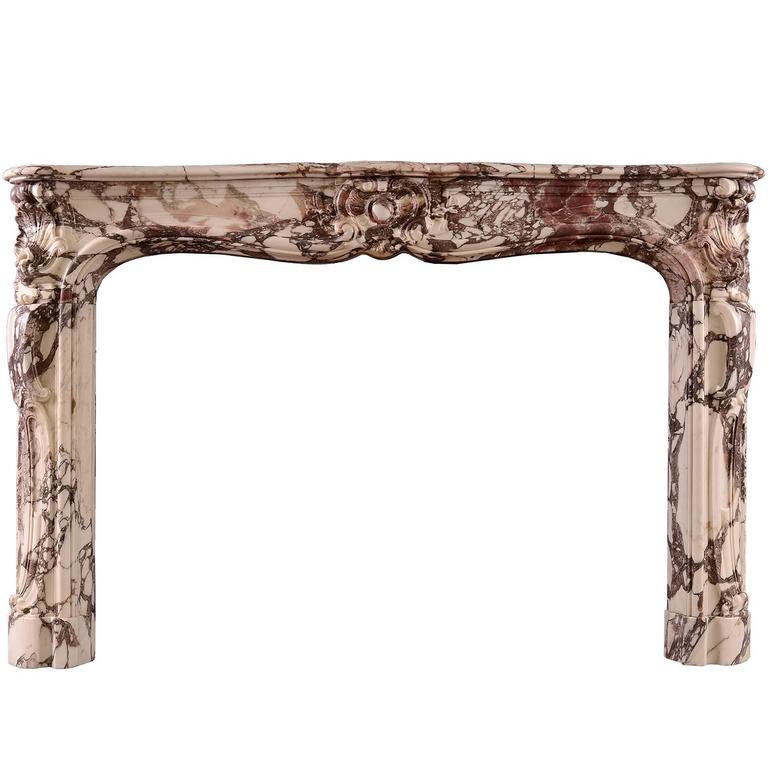 “The rarity of the Breche Violette marble used to sculpt this French Louis XV fireplace makes it an exceptional find.” 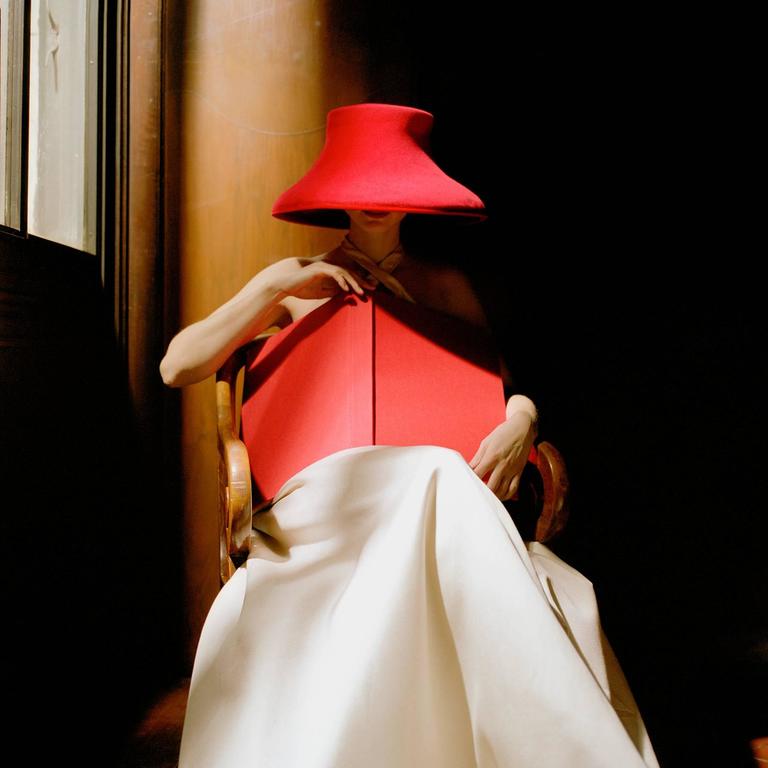 “I love the graphic quality of this photograph by Rodney Smith. The timeless and classic beauty of the image and the surreal mood created by the hat and book feel so very contemporary.” 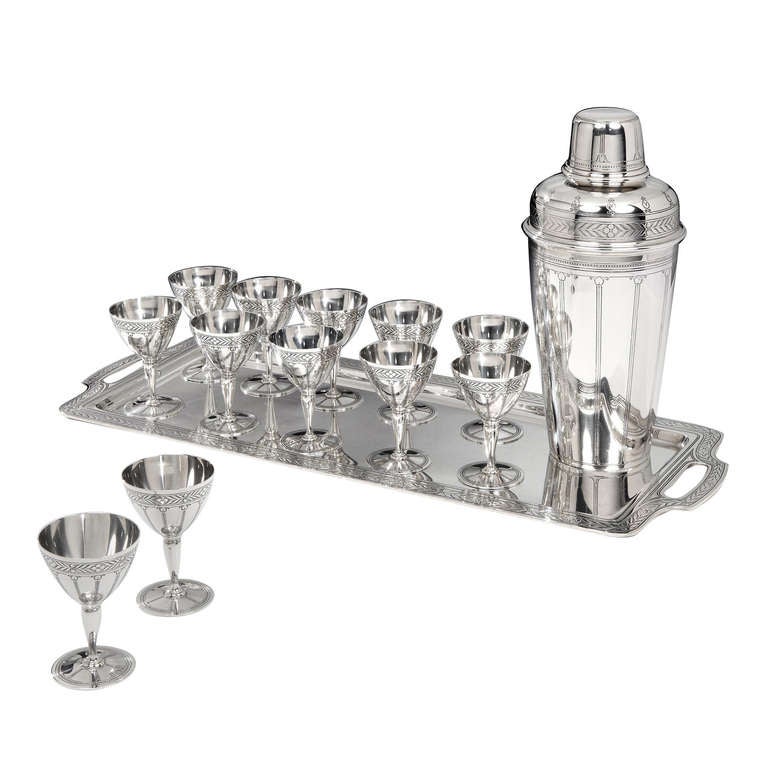 “There is nothing, and I mean nothing, like the taste of a drink mixed in an exquisite antique cocktail shaker like this sterling-silver Art Deco example from Tiffany & Co. It harks back to a bygone era when one took the time to enjoy the entire process of preparing drinks.” 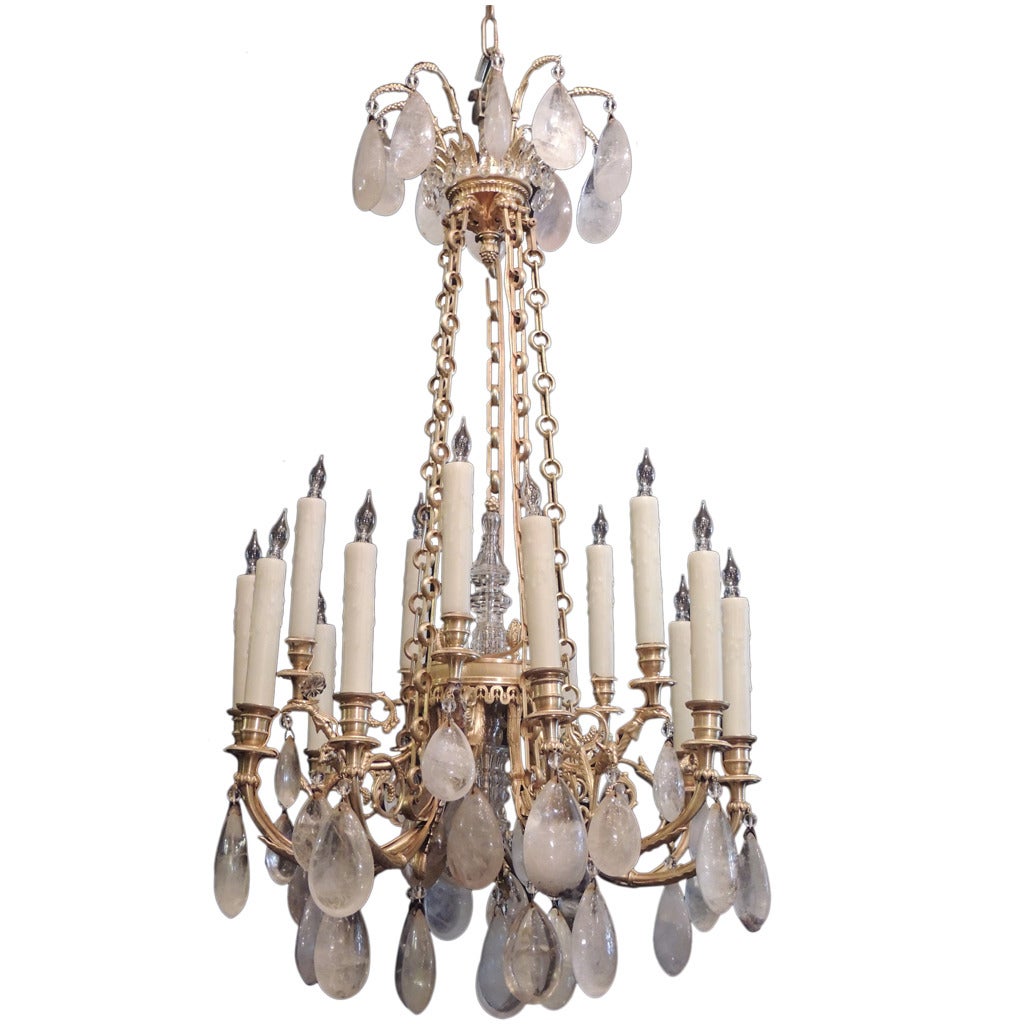 “This unique Russian rock-crystal chandelier has a wonderfully elegant shape and is perfect for either a traditional paneled room or a spare contemporary space, where it would make a particularly interesting focal point.” “These channeled leather dining chairs feel very current. They would look amazing in a clean and contemporary architectural space.”

“This piece of Wedgwood Jasperware in an unusual olive green is the perfect kind of decorative accessory to build a collection around. Massing a number of similar pieces in this finish would make for a wonderfully striking visual display.”