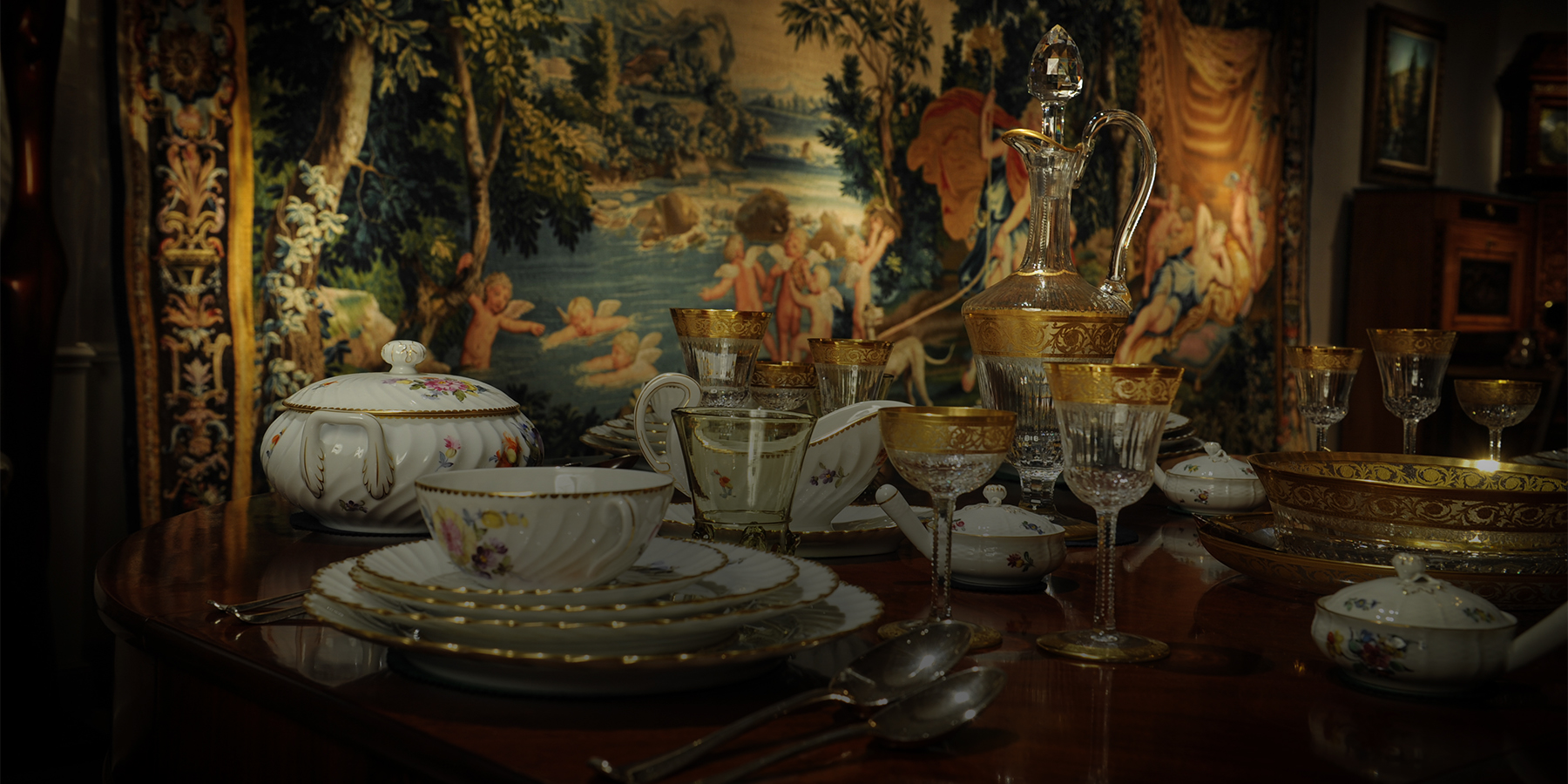 A college dropout, Pieter Hoogendijk turned to antiques restoration to make a living only to become one of the world’s top specialists in 17th-century Japanese lacquer and 18th-century Northern European furniture. 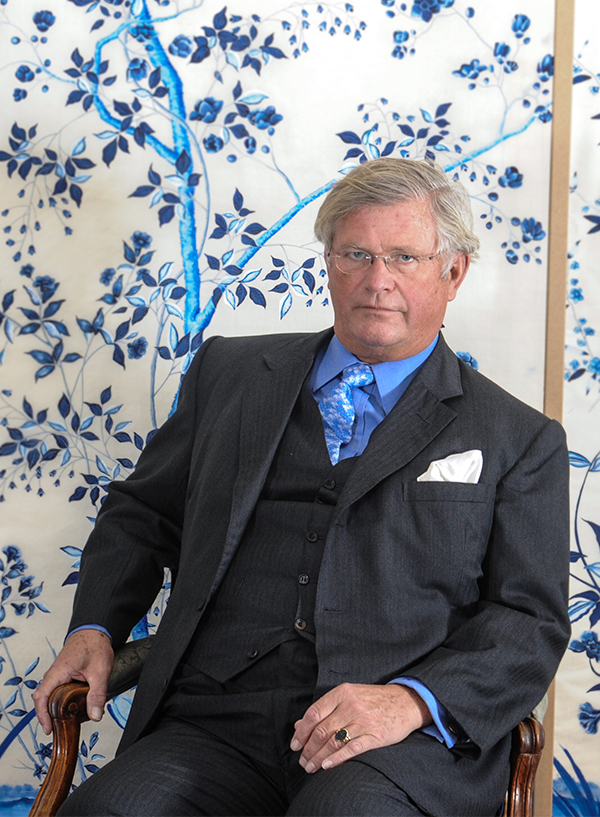 March 19, 2014From his gallery just outside of Amsterdam, Dutch antiquiare and master restorer Pieter Hoogendijk presides over a prized assortment of 17th-century Japanese lacquerware and 18th-century northern European furniture and decorative arts. Photos by Maria Cavali

Sometimes a curse can turn out to be a blessing. Pieter Hoogendijk’s father was so dismayed when his son dropped out of school that he cut him off financially, at age 20, just after his mother died. “He gave me no money, not a penny, no nothing,” says the younger Hoogendijk, a cheerful and robust Dutchman, now 65, with a ready smile and pale blue eyes. “I went to Amsterdam, and there I was lucky to find a cellar where I could work.”

In that cellar, on the Nieuwe Spiegelstraat, Amsterdam’s main street for museum-quality antique shops, Hoogendijk set up an atelier and practiced some of the skills he’d learned at technical school — woodworking, woodturning and French polishing — and proved he had a great deal of talent. Thankfully, as he put it, he discovered that “there were a lot of dealers on the Nieuwe Spiegelstraat who were very happy to have a restorer right on the street.”

Hoogendijk supplemented his income as a restorer with work as an art handler at Mak van Waay (which later became Sotheby’s Amsterdam) and by assisting a jewelry dealer. And this proved to be just the right trifecta of experiences to become what he is now: one of the world’s leading dealers in 18th-century northern European furniture and 17th-century Japanese lacquerware, who just so happens to restore everything he offers himself.

Hoogendijk didn’t know he’d eventually become a dealer in his own right, but a year on the Spiegelstraat gave him a taste of what it might be like. So, in 1971, he moved to France, reasoning that learning French was a skill necessary for international trade. Learning the language had another side benefit, too: The main subject that had tripped him up in school had been French, he says today, and he thought learning to speak it fluently, while living France, would finally prove his father wrong about his ambition.

“I took a meat lorry to Paris for fifteen guilders, and I stayed in a hotel for fourteen francs a night on the Rue Saint-Denis in Les Halles,” he recalls. “After three days, I found an apprenticeship in a workshop for furniture restoring with Claude Bonnal, at that time the biggest restorer in Paris, where eighteen people were working.” At the same time, he attended workshops in the restoration of Japanese lacquer pieces at a little antiques atelier on the Rue Henri Monnier, and studied French at the Sorbonne. 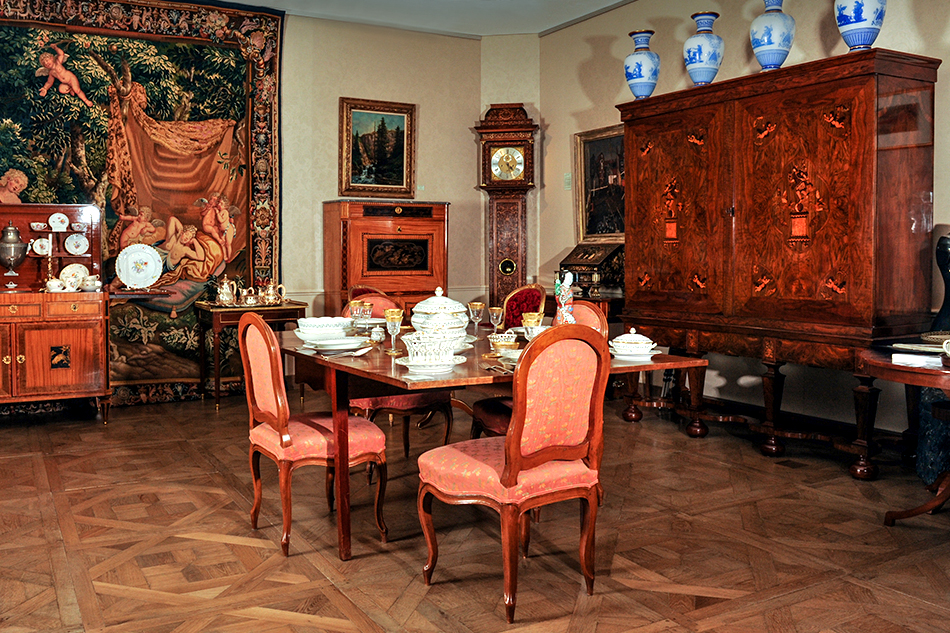 Four of a suite of ten French 18th-century beechwood chairs surround a table set with a Dutch dinner service of Amstel porcelain, ca. 1790; in the background is an early Dutch 18th-century walnut marquetry cabinet. 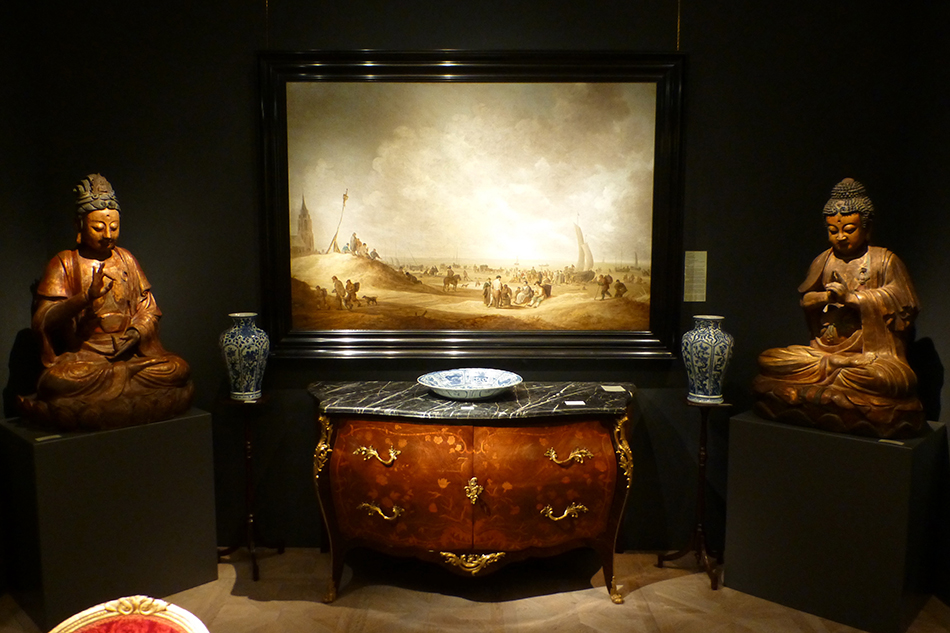 The dealer’s booth at TEFAF features two figures of Shakyamuni and Guanyin from the late Ming dynasty (mid-16th to mid-17th century) as well as On the Beach at Scheveningen, by Jan van Goyen, 1642, which hangs over a large Dutch Louis XV commode. Photo courtesy of the gallery 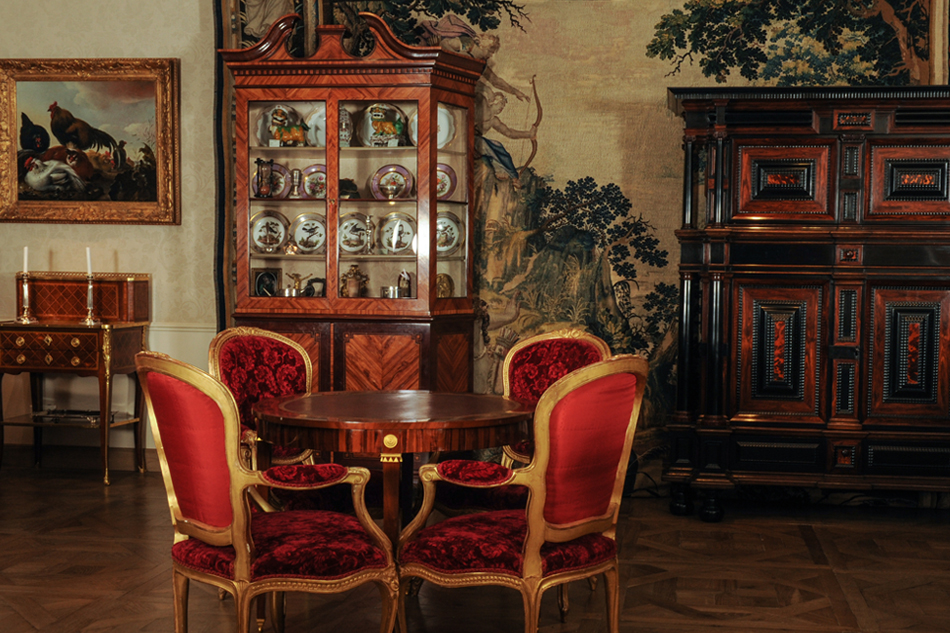 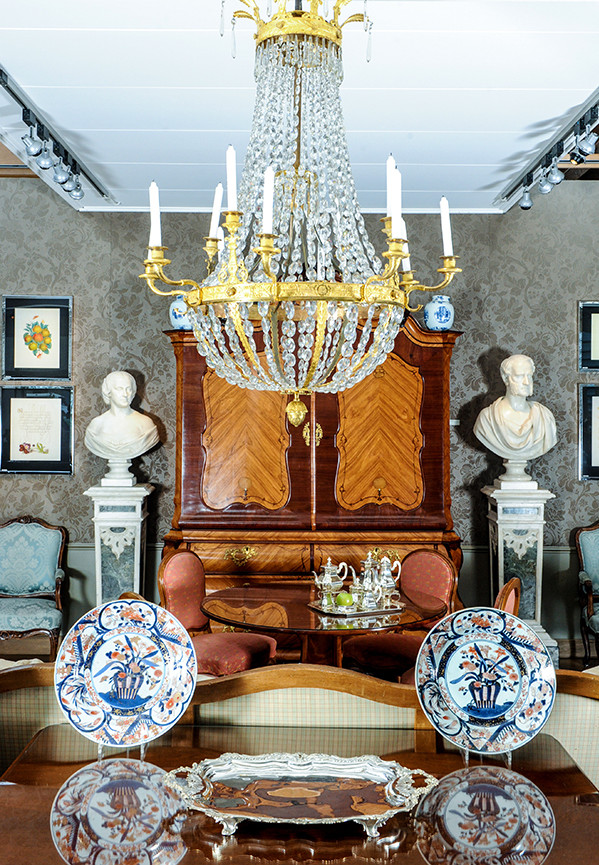 In the foreground, a 12–light French Empire chandelier, ca. 1800–1820, hangs above a pair of Imari dishes from the late 17th or early 18th century; behind, a pair of busts carved by Randolph Rogers, in Rome, in 1860, flank a rare Dutch Louis XV cabinet from the second half of the 18th century.

A couple of years later, he began taking classes in art history at the École du Louvre. Even though he hadn’t finished his university studies, the admissions committee deemed his three years of work in the antiques field equivalent to a baccalauréat, and he was admitted into the graduate program. “So, in the end, I did my degree in a different way,” he says smiling. “Unfortunately, by then, my father had passed away. He would have loved it.”

Now that he had connections in France, he was able to work with Dutch dealers who were looking to buy French furniture. And soon enough, his network was so strong that some of the specialists at Sotheby’s took notice and encouraged him to take their Works of Art Course in London, which he was only too happy to do. His classmates there included Peter M. Fairbanks, now of San Francisco’s Montgomery Gallery; London antiques dealer Robert Young; and Swiss art auctioneer Simon de Pury.

In 1977, he returned to the Netherlands to establish his own business, calling it simply Pieter Hoogendijk, and operating it out of a 19th-century country house in Baarn, the hometown of the Dutch royal family, about 35 minutes southeast of Amsterdam. He stayed there, welcoming clients from around the world and doing a brisk business for more than three decades. Over the years, he became one of the most respected names in antiques. (In 2012, he was elected president of the Confédération Internationale des Négociants en Oeuvres d’Art, or CINOA, a federation of art and antiques dealers associations.)

Six years ago, the owners of the estate where he was based sold it. As Hoogendijk saw it, however, the timing was just right for a move. “No one really needs an antiques shop anymore,” he says. “Ninety-nine percent of business is done on the internet these days; you don’t get walk-ins off the street for this kind of material.” In fact, he gets most of his new clients from TEFAF, in Maastricht, where he’s been exhibiting regularly since it started in 1978. (Currently midway through its run, the illustrious art and antiques fair goes through March 23.) 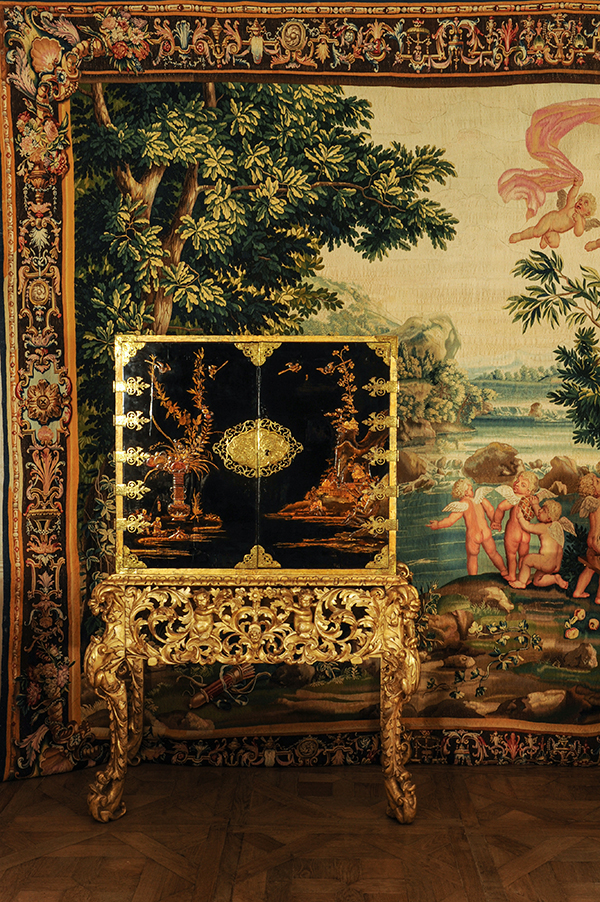 A Japanned lacquer cabinet made in Europe sits on a stand in front of a French Beauvais tapestry titled Adonis led by Cupids to Venus. Both are from the late 17th century.

After closing the Baarn atelier, Hoogendijk searched for a new space, finally landing on something quite unexpected: a nearly 4,000-square-foot storefront in an industrial park surrounded by car dealerships, just a five-minute drive from his home in Naarden, which is 25 minutes southeast of Amsterdam. Previously used as a printing facility for a publisher of pornographic magazines, the space had been completely stripped bare, so to speak, by the time Hoogendijk discovered it. “Everybody asks if we found anything left behind,” he admits with a laugh.

The shop-to-be was hardly in move-in condition. Hoogendijk had to replace the electrical wiring, the heating, the ceilings and walls. Once the raw space was refitted, he added a thick oak-parquet floor and wall coverings from the Jim Thompson Thai Silk Company, which he had embossed with 18th-century patterns at Leliévre, a custom-fabric house in Paris.

With its car dealerships and nondescript architecture, the industrial park is a far cry from Baarn and the Nieuwe Spiegelstraat. So when the dealer flips on the gallery lights, it’s hard not to gasp at the chests and coiffeuses, the blue-and-white Chinese porcelains, the veneered mahogany, oak and rosewood cupboards hidden therein.

On one wall, a mythological tapestry hangs; elsewhere are Lalique vases and neoclassical settees, all in pristine condition, along with paintings by the highly collectible 19th-century Dutch painter George Hendrik Breitner. A back room houses the restoration studio, where, on a recent visit, Hoogendijk was working on three exquisite 17th-century Japanese lacquer trunks.

Looking around the gallery with obvious delight, Hoogendijk revels in the unlikeness of his new space. “Johnny van Haeften [the London-based dealer of Old Master paintings] came to visit me, and he said, ‘Aren’t you a clever devil?’” Although mindful that he is now at an age when he could easily retire, Hoogendijk says he doesn’t see any reason to stop. He’s glad for every decision he has made along the way — including dropping out of school at 20. “I have the most delightful profession in the world,” he says.

Pieter Hoogendijk shares his thoughts on a few choice pieces. 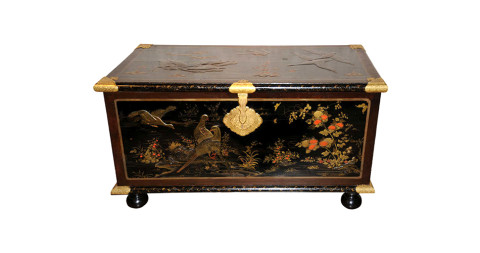 I found this extremely rare piece 32 years ago at a small auction in Holland. I cleaned it, restored it and later sold it in New York. It came up for auction in London about 10 years ago, and I bought and sold it again. That owner passed away, so I bought it back from the family. I’ve never seen anything else like it in all my years. With these kinds of images – pheasants, geese and flowers surrounded by butterflies – it’s very special. As for its origins, we still don’t know. 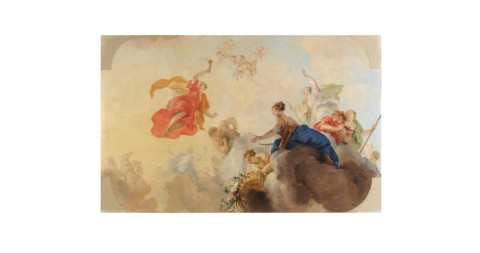 Shop Now
The First Light, a ceiling painting with Apollo and Diana, by Jacob de Wit, 1729

This is the only existing ceiling painting by Jacob de Wit on the market. A friend of mine found it in New York, brought it back to Holland and restored it. De Wit was extraordinary. He did many of the murals and ceiling paintings for the royal palaces and important homes in Amsterdam in the 18th century. 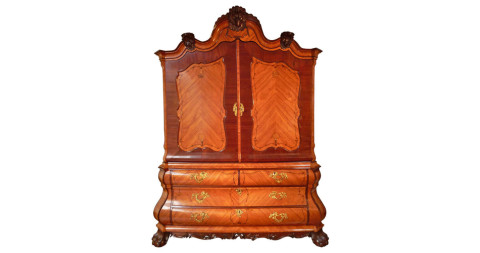 The doors of this tulipwood and amaranth-veneered cabinet bear the initials “GZM” and “JWW,” which tell you it’s a cabinet du marriage commissioned for a newly married couple. The two panels at the knees open to reveal four hidden drawers on each side. It’s the nicest cabinet of that period that I’ve ever had in my inventory – so nicely balanced, so well designed. The wood carvings on the top are made of solid amaranth wood, or purpleheart, an extremely rare, purple wood from South America. 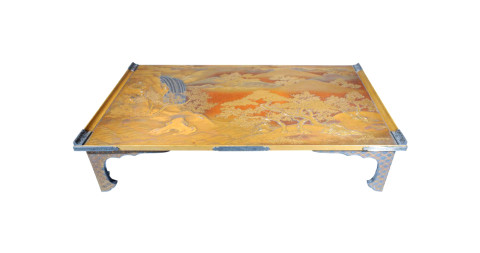 This is a little piece from Japan’s Meiji period, the second half of the 19th century. What makes it very attractive are the silver mounts with floral relief on its four shaped legs. A present from a Japanese visitor to the Dutch royals, it came out of the collection of Princess Juliana, who was Holland’s queen regent from 1948 to 1980. 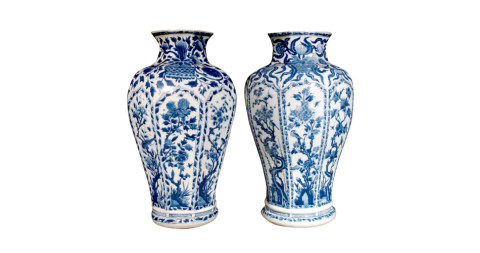 These vases from the reign of China’s Emperor Kangxi (1662–1722) were brought to Holland by Anna Pavlovna, queen of Apollonia and daughter of Czar Paul I of Russia, after her marriage to Prince William II, who would become the Dutch king. On the bottom you can see her marks. They were in Paleis Soestdijk, a palace in Baarn. I purchased them directly from the royal family. There’s nothing like them on the market anymore. 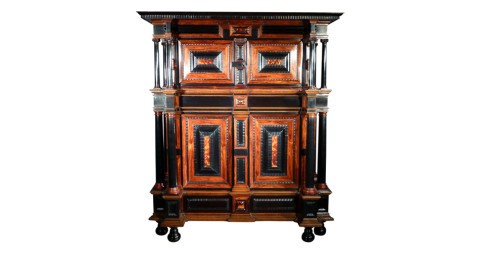 I found this Dutch cupboard at an estate auction in Belgium. It had a thick layer of dirt on it, but underneath it was all the original woods. There’s a similar piece in Amsterdam’s Rijksmuseum, but I think this one is more handsome. There’s tortoiseshell veneer, and the six pillars give it an architectural depth. It’s balanced in all the ways you can balance a piece of furniture. It is an incredibly unique piece and in incredible condition.