The Secret Society of Rebellious Artists Behind a Dreamy, Hyper-Romantic Movement

A new show explores the historical context and influences of the Pre-Raphaelites, whose works still provoke very strong and opposite emotions.

August 19, 2018The San Francisco show “Truth and Beauty: The Pre-Raphaelites and the Old Masters” juxtaposes works by these two influential groups of artists. Above: Beata Beatrix, 1864–70, by Dante Gabriel Rossetti. Top: Love and the Maiden, 1877, by John Roddam Spencer Stanhope

There is rarely a middle ground where Pre-Raphaelite art is concerned: People are either seduced by it or underwhelmed. Whichever side you find yourself on, there’s little doubt that the Pre-Raphaelite style is one of the most recognizable in British painting, or that it mirrors the Victorian era, caught as it was between tradition and irreverent progress.

Its seduction stems, in part, from the stunning, luminous color applied — a full 20 years before the French Impressionists tried such techniques — into wet, white grounds and the pieces’ astoundingly fine linear detail, often recalling manuscript illumination. Imagery tends to involve porcelain-skinned maidens, their auburn locks flowing, enacting scenes of longing or tragedy drawn from tales about Camelot or told by Dante, Shakespeare, Tennyson and Keats.   Today, our contact with the Pre-Raphaelite movement is usually limited to the occasional film or saucy article digging up new facts about the sybaritic lives of these well-heeled and talented lads, for they were mostly men. In the 1850s, John Everett Millais, Dante Gabriel Rossetti, William Holman Hunt and their cohort made dramatic art as they traded wives, lovers, models and muses like paintbrushes. 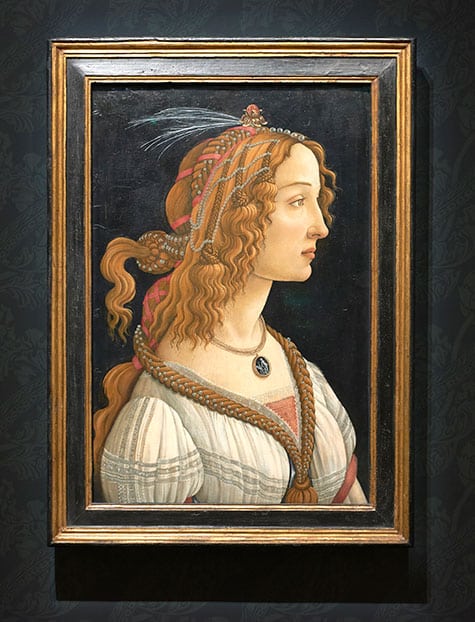 The San Francisco show “Truth and Beauty: The Pre-Raphaelites and the Old Masters” juxtaposes works by these two influential groups of artists. Above: Idealized Portrait of a Lady, ca. 1475, by Sandro Botticelli. Top: Love and the Maiden, 1877, by John Roddam Spencer Stanhope

An opportunity to revisit the movement has arrived with an ambitious new exhibition. “Truth and Beauty: The Pre-Raphaelites and the Old Masters,” on view at San Francisco’s Legion of Honor through September 30, rises above juicy scandal to earnestly and historically contextualize the group’s sense of rebellion, its connections to literary sources and its embrace of looking back — to guilds, to medieval culture, chivalry and the precision of Northern European art — in order to break with the stifling, overly dictated Victorian order.

“Truth and Beauty” contains some 100 undeniably striking paintings, works on paper, tapestries, stained glass and textiles, many lent by major collections, including the Städel Museum, in Frankfurt; the Tate, in London; and the Boston Museum of Fine Arts. Curated by Melissa Buron, director of the Art Division at the Fine Arts Museums, San Francisco, it displays pieces by the best-known Pre-Raphaelites alongside rarely loaned Old Master works that might have moved and instructed these free thinkers. Also exhibited is a thoughtful selection of other works by members of their intellectual circle, such as the famous critic and Pre-Raphaelite champion John Ruskin (whose wife, Effie, Millais fell for and, after the scandalous annulment of the Ruskins’ marriage, wed) and William Morris, the designer and founder of the Arts and Crafts revival (with whose wife, Jane, Rossetti likely carried on a long affair).

Because of the complexity of its loan agreements, the exhibition will be on view only in San Francisco. It’s definitely worth visiting if you’re in town. 1stdibs recently spoke with Buron about the goals of the show and the complex, often contradictory movement itself. 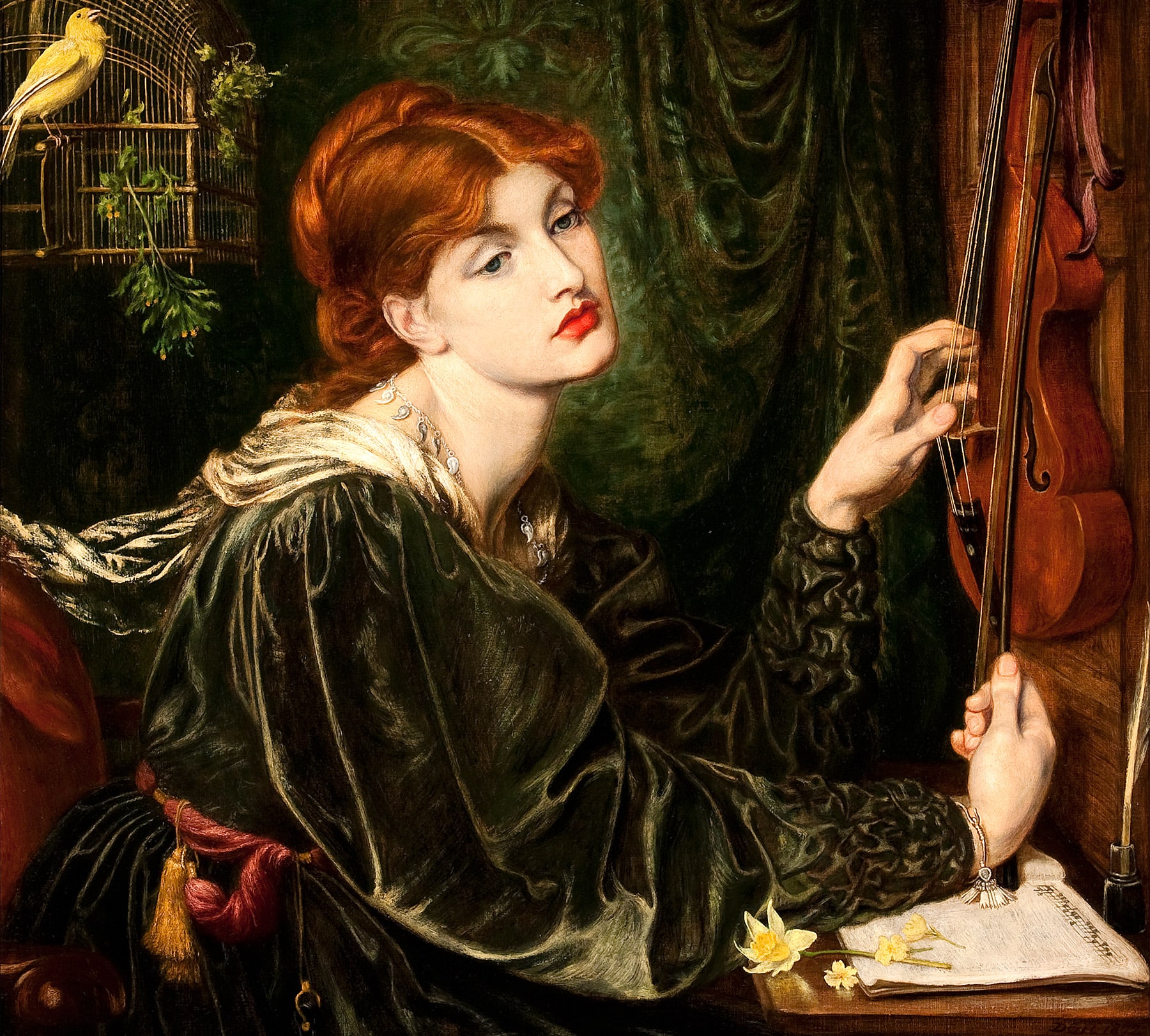 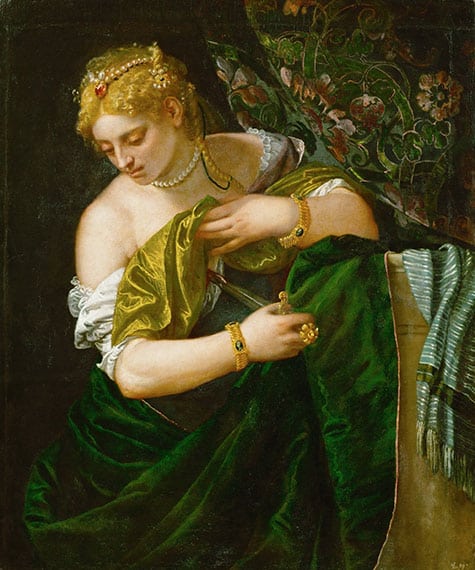 Were there major challenges in putting this exhibition together?

What unifies this project is risk: our institutional risk and the risk of these unconventional artists. There are no neutral feelings about the Pre-Raphaelites — not now nor in the eighteen fifties.

It is hard to see this appealing work as risky. How has the public responded to the show?

We have been astounded at the attendance. Curators from the Getty Center, in Los Angeles, lent key pieces, and they were here for a walk-through. They noted that midday, midweek the galleries are filled.

Your premise seems to be that the dreamy, hyper-romanticized world evoked by the Pre-Raphaelites was more than eye candy for newly wealthy industrial barons, that it was, in fact, a dangerous rebellion. Is that accurate?

Absolutely. The Pre-Raphaelites gathered in 1848, when all of Europe broke out in protests against prevailing authority. Their rejection of standards, of revered academic art by teachers like Joshua Reynolds, wasn’t just subversive, it was literally risky.

Joshua Reynolds was the new director of the Royal Academy, where some of these young men studied. Yet they called him Sir Sloshua.

They mocked him, but more so everything he stood for. We hit on the title “Truth and Beauty” precisely because these artists were asking questions like “Who gets to decide what beauty is and what truth is?” Those were loaded questions then, and we’re struggling with them today.

You propose that the name they gave themselves might be a misnomer.

It needs qualification. Pre-Raphaelites refers to their distaste for the countless followers of the painter Raphael who rotely copied formulaic elegance. They did not call themselves the Pre-Raphaels! The point of the show is to suggest that these artists looked at and drew inspiration from not just Raphael but also artists like Fra Angelico, Botticelli and Veronese and that they reacted against some aspects of past art and embraced others with a good deal of thought and individuality.

That’s ironic because they do come up with their own formula, so to speak, which is not, on first impression, easily relatable to the Old Masters.

The most obvious influences they took were the use of fine line and crisp, luminous colors, the angularity of the figuration, the emotional intensity and very personal use of symbols and allegories. I can’t point to the very document that proves they saw or reacted to this exact master work or that — although I am searching! As students at the Royal Academy, Millais and Hunt — and, by extension, Rossetti — must have studied work in the national collection, since the school and the collections were in the same building. They saw the newly acquired Arnolfini Wedding by Jan van Eyck, which remains in the National Gallery in London today. We know this moved them because Rossetti and Hunt made a trip to Bruges [, Belgium, where Van Eyck lived and worked]. 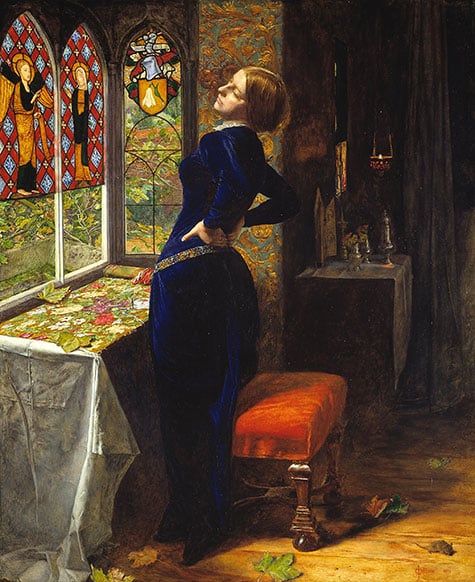 Can you give an example of a Pre-Raphaelite–Old Master pairing you find instructive?

We could not get that famous Arnolfini Wedding, but we show Van Eyck’s Annunciation, from the National Gallery in Washington, D.C., in dialogue with Millais’s painting Mariana, which is related to a Tennyson poem inspired by a character from Shakespeare who is abandoned by her betrothed. There’s a similar color palette, similar use of complex symbols to suggest motherhood.

The Botticelli works you gathered are impressive, and there, the connections to lyrical line and concepts of feminine beauty are clear.

We installed six very fine works by Botticelli for context, more than have ever been gathered on the West Coast.

What about their secret society — was it just another attempt to shock, or did they actually believe in those old fraternal notions?

Maybe both. What better way to create a stir than by declaring yourselves a clandestine brotherhood going by the mysterious initials PRB and leading libertine lives? When planning the show, we agreed that coming up with a secret society sounded like advice from a hip PR firm. It’s important to recall that the brotherhood lasted only about five years — their careers went on much longer. I hope the exhibition forefronts their evolution from twenty-something, inexperienced idealists to the mature and singular artists they became.

Wealthy industrialists responded to the work and acquired it, held on to it — luckily for us — but critics like Charles Dickens and others were brutal. Ruskin was an insightful defender. The Getty lent us the book of hours dating to the 1300s owned by Ruskin. It is open to a page showing the elaborate vegetative designs that appear in paintings, stained glass and tapestries on view. 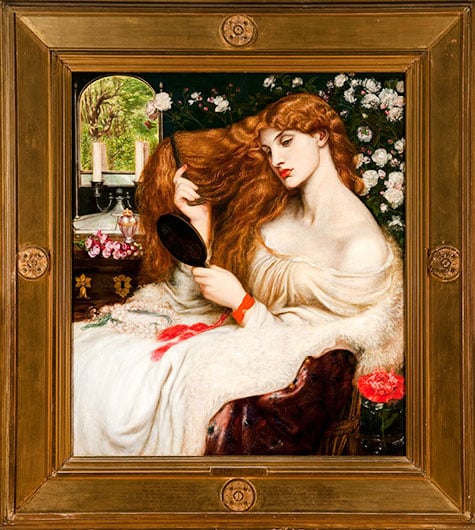 It might be unwise to use a 2018 lens here, but you can’t help but notice a conflicted approach to women — as people and as subjects. Women seem both venerated and exploited.

To explore this, I included many women Pre-Raphaelite artists. Many of the muses were artists in their own right. I show Holy Family by Elizabeth Siddal, Rossetti’s wife, who died young, and terrific photographs by Julia Margaret Cameron, as well as works by Evelyn De Morgan and others.

You’ve mentioned that this nearly two-hundred-year-old movement has direct implications for us today.

I think museum shows must relate to their own global moment. In the eighteen fifties, human experience was changing drastically, at an unprecedented speed — trains, printing, industrialized production, consumer society, world travel. This produced a great deal of social and individual confusion, so the Pre-Raphaelites sought liberation in the past. This absolutely mirrors our current conditions. Life moves even faster today, and young people look to handcraft, DIY, nature and other seemingly retrogressive ideas to reinvent themselves and renew their times.