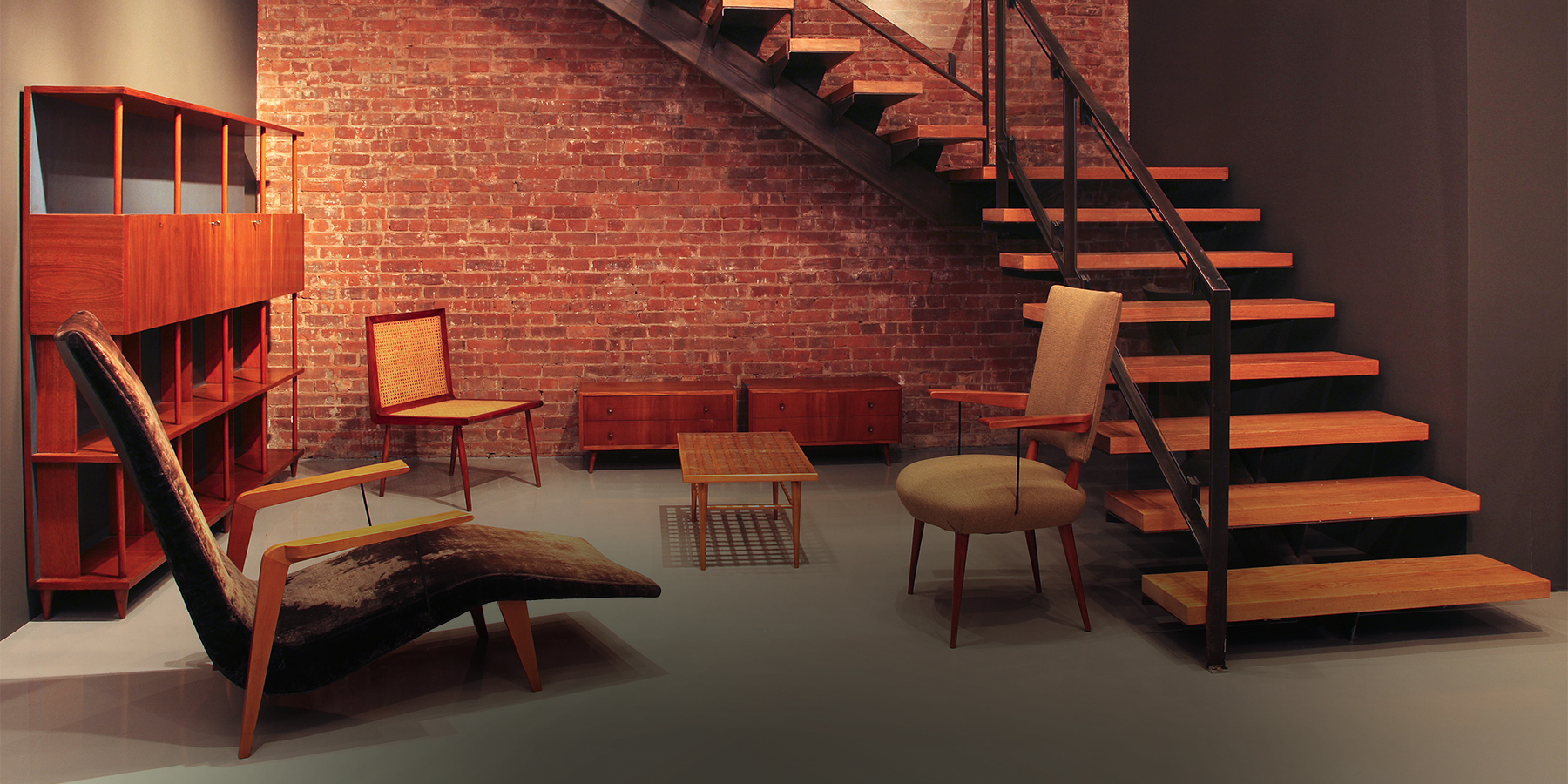 For the design-dealing duo behind the Tribeca mid-century mainstay R & Company, formerly known as R20th Century, the 1900s were just the beginning. Lately, they've been expanding their purview and have a brand-new name to prove it. 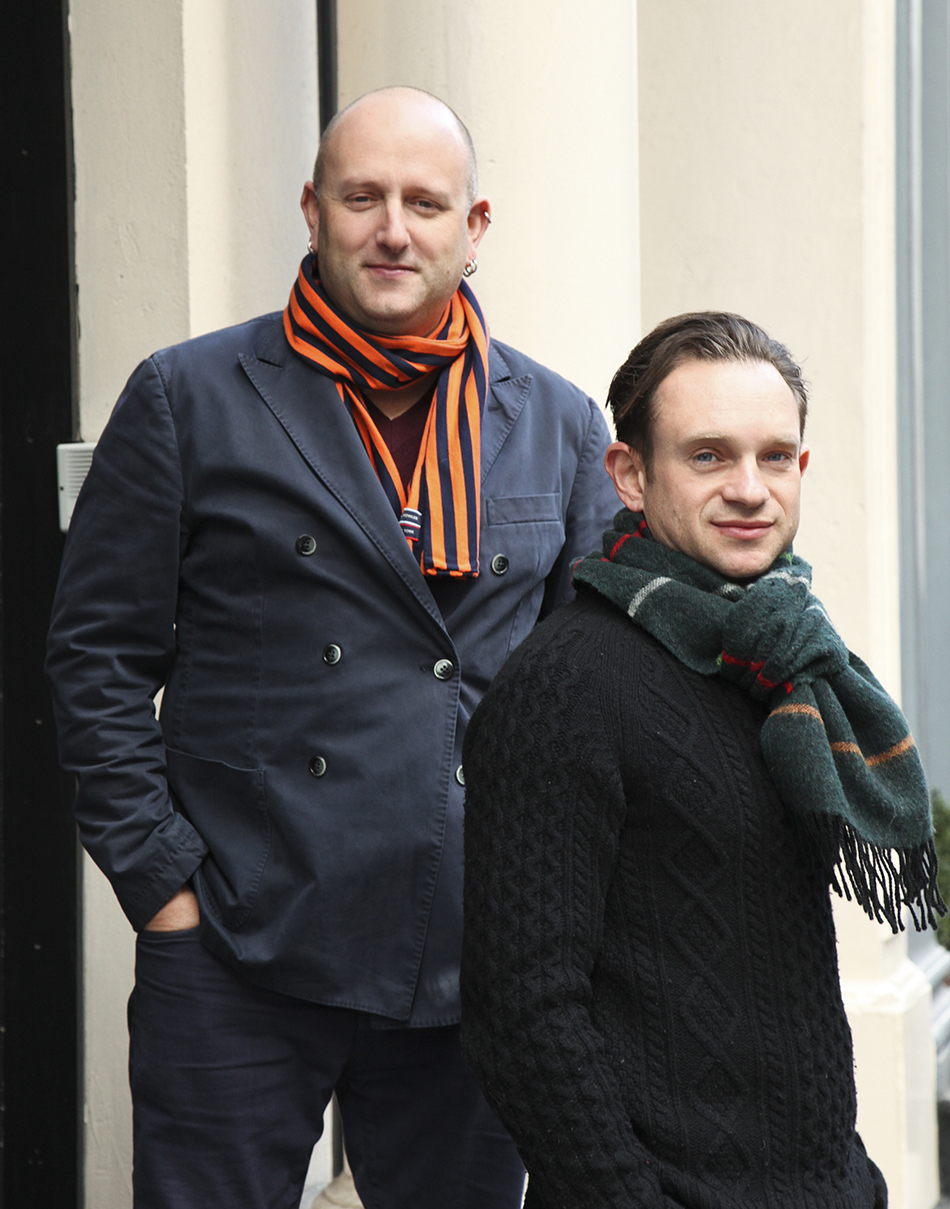 Zesty Meyers (left) and Evan Snyderman recently renamed their New York gallery to better reflect its split focus on mid-century modern designers ­— like Joaquim Tenreiro, whose pieces can be seen at top — and those who are working today.

Behind the scenes of the sleek, quiet Tribeca headquarters of R & Company — one of the world’s top modern and contemporary design dealers practically since its 1997 inception — there’s a bustling museum-like operation. Founders Evan Snyderman and Zesty Meyers are not just dealers, but devotees (other words that spring to mind: zealots, true believers, even apostles), and they’re on a mission to carefully steer the relatively young field of “design” into the future. They want to establish its credibility as a collecting category and, from there, expand appreciation and grow a market for the material that’s on a par to that for fine art.

To that end, their shows of work by historical figures are thoughtful, highly curated and much-researched affairs culled largely from their gallery’s massive inventory, as well as its expansive permanent collection of prototypes, original works and editions, all housed in a 10,000-square-foot warehouse in Williamsburg, Brooklyn. (The gallery also maintains vast collections of supporting photographs, books, notes and other ephemera, all of which they have used, as academics would, to better understand how their designers’ careers developed.)

But for this duo, the modern past is not so far away from the exciting present, and they fully expect that the design canon they are helping to build will one day include today’s best makers. It’s for that reason that they are also devoting significant resources to nurturing the careers of the nine contemporary designers they represent, including cutting-edge glass artist Jeff Zimmerman (whose new show at the gallery is on view through March 8); David Wiseman, who transforms bronze and porcelain into elaborate nature-inspired forms; and Wendell Castle, the octogenarian American Studio master who is still creating sleek yet whimsical furniture and sculptures. 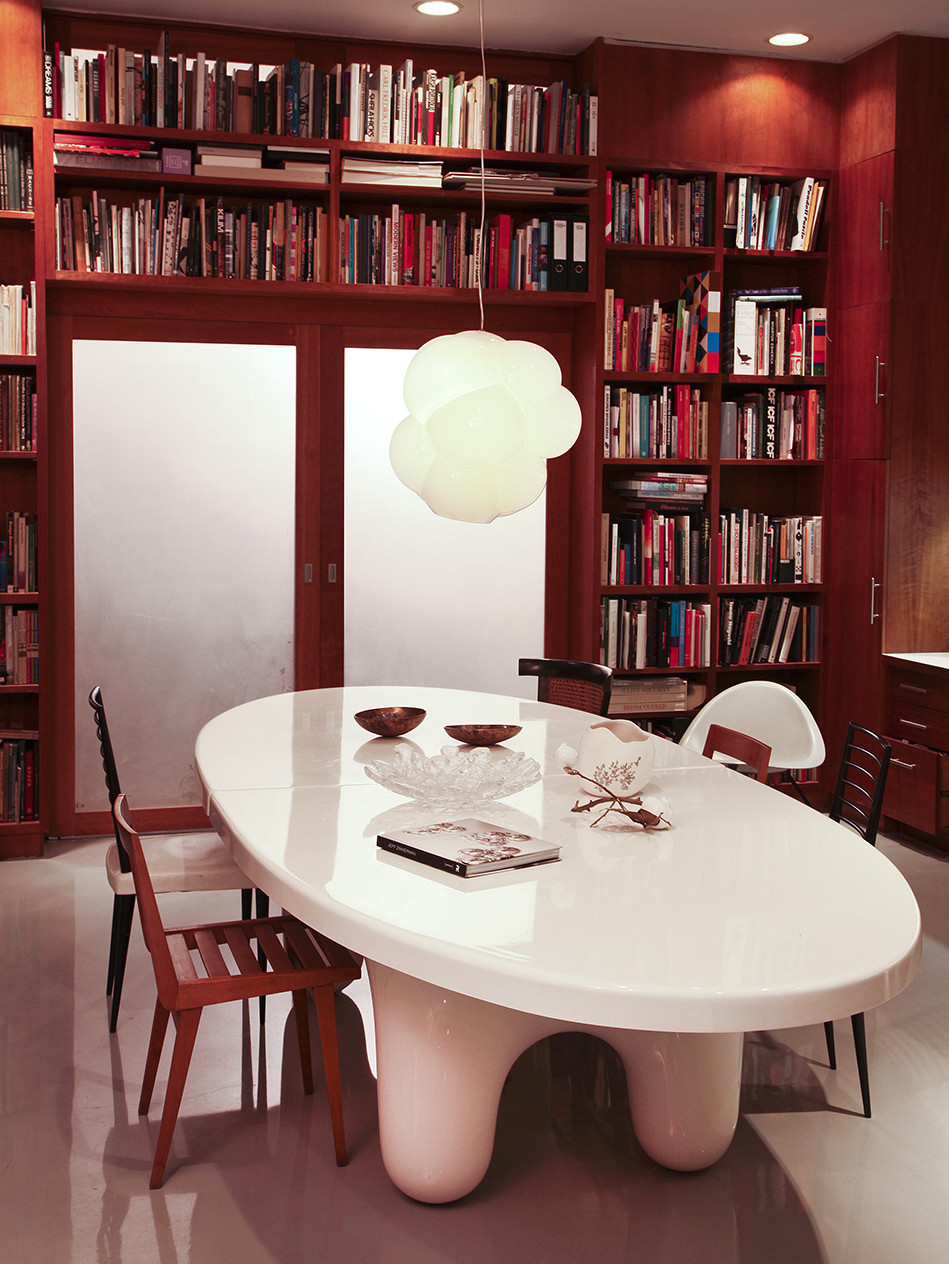 With its limited-edition Wendell Castle White Edition table (original design, 1970; edition, 2006-11) and Jeff Zimmerman’s Biomorphic Bubble hanging glass sculpture (2009), the office and library at R & Company could be mistaken for one of its installations.

The depth of their approach is evident in the new name of the gallery, R & Company — a rebranding that reflects their interest in the 21st century as well as numerous collaborations with curators, architects, photographers and others. “This isn’t to say we’re moving away from historical design,” cautions Meyers. In fact, their new moniker will enjoy its public debut at this week’s Winter Antiques Show, to which they’re bringing exceptional examples of historical (read: pre-1970) furniture by Brazilian modernist Joaquim Tenreiro; mid-century designer Greta Magnusson Grossman; and ceramicist La Gardo Tackett, who worked for California’s legendary Architectural Pottery. (Hear Meyers discuss these designers and more on Friday, January 24, at the Park Avenue Armory as part of 1stdibs’ free Design Friday program at the Winter Antiques Show.)

“For us it has always been about the long haul as opposed to the quick and fast buck,” says Snyderman, 43. He and Meyers, 44, first met in 1995 as members of the B Team, a radical New York–based collective of performance artists who used molten glass as their medium. The two began collecting antiquarian books and selling vintage modern furniture in the mid-’90s at the 26th Street flea market in Chelsea. “When we launched the business, we were in the right place at the right time,” says Snyderman. “People were just starting to pay attention to modernism, but you could still find great things in the trash.” They quickly formed a devoted collector base. “Everybody was going to the flea in those days,” adds Meyers. “People building museum wings, curators, movie stars.” They opened their first shop in Williamsburg in 1997.

“It’s about slowly building a market for a designer,” says Meyers, “the way
a dealer does for an artist.” 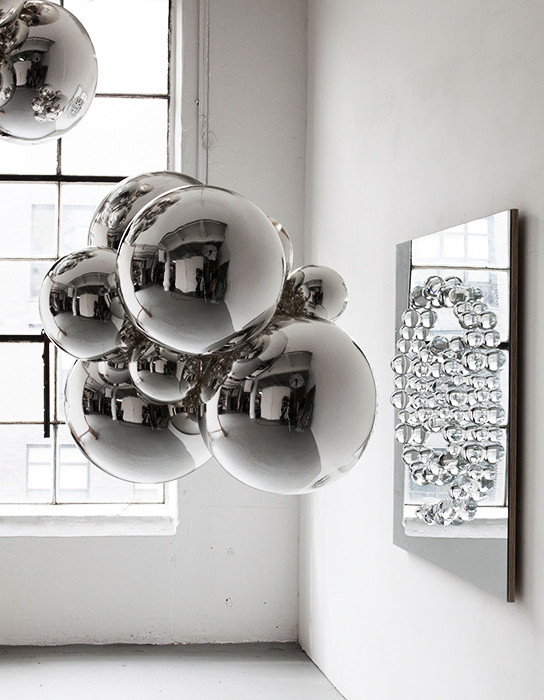 The gallery’s current show celebrates contemporary designer Jeff Zimmerman with pieces that include a hanging sculpture in hand-blown silver mirror glass and a mirror with hand-blown glass orbs, both from his 2013 “Multiverse” series. Photo by Sherry Griffin

But it wasn’t your standard mid-century names they were after. “We knew that Eames, Perriand, Prouvé and Nakashima were already discovered, and we’d never be able to take over those markets,” says Meyers. “But there was all this other stuff that no one had ever made a case for: Architects and designers who had great shows in the fifties and sixties, and you could just pick up the phone book and call some of these people.” One such person was Pierre Koenig, the Los Angeles–based modernist architect of Case Study House fame. Koenig introduced the dealers to legendary architectural photographer Julius Shulman, who became a friend and collaborator. It was through Shulman that they got their lead on the Swedish-born, LA-based Grossman, whose long-forgotten work he had once captured in photographs.

They eventually purchased Grossman’s entire estate after courting her stepdaughter for six years. But it wasn’t just the designer’s sleek mod lamps and furniture they were after — it was her drawings, notes, letters and other documents that contained information about her personal life, manufacturing processes, employers and endless other details about the rich mid-century period of design in Los Angeles. “As we started to search more on the vintage end, we knew that if we were going to be able to do great things, we’d have to find this ephemera,” says Meyers. “We’d have to be able to say why this is important, why this happened.” The scholarly Grossman show they organized in 2000 traveled to three different museums. “It’s about slowly building a market for a designer, the way a dealer does for an artist,” says Meyers.

Similarly, 10 years passed from the time they first collected and researched Joaquim Tenreiro to their major solo show of his work this past December. Curated by modern and contemporary art dealer Gordon VeneKlasen, a Tenreiro collector, and designed by architect Annabelle Selldorf, the exhibition featured more than 20 examples of the Brazilian designer’s mod wood furniture, along with drawings and ephemera from private collections. Meanwhile, Snyderman co-curated “Wendell Castle: Wandering Forms, Works from 1959-1979,” with Alyson Baker, director of the Aldrich Contemporary Art Museum, in Ridgefield, Connecticut, culling some of the works from R’s permanent collection. Now on view at the Savannah College of Art and Design (SCAD), the show debuted at the Aldrich in fall 2012. 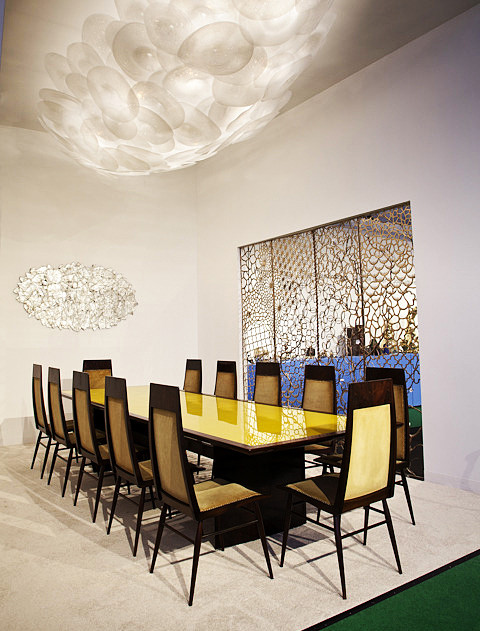 The gallery’s display at December’s iteration of Design Miami included a dining table and chairs by Joaquim Tenreiro (ca. 1949), an illuminated sculpture in hand-blown soda glass by Jeff Zimmerman (2013) and a bronze screen by David Wiseman (2013). Photo by Joe Kramm

Meyers and Snyderman take the long view with their contemporary designers, too. “It’s our job to let these artists develop and to help fund their studio and their dreams,” says Meyers. They very deliberately only take on designers who both conceive and make work with their own hands. “We’re interested in this uniquely American thing happening now, this hybrid of craft and design,” says Snyderman. So along with Zimmerman and Castle, the gallery has shows planned of works by German toymaker Renate Müller and the Los Angeles–based Haas Brothers, who make playful, luxurious furniture, like fur-covered chairs and settees with cast-bronze hooves. Their first solo show is slated for November 2014.

If overseeing commissions and exhibitions for nine designers while planning in-depth historical shows — not to mention participating in multiple fairs around the world every year — seems like a lot, it is. “We just can’t add anything else right now,” says Meyers. “We have no more space and no more time.” That said, the dealers can’t seem to stop collecting, regularly bidding on vintage material at auction. “It’s a legal addiction,” says Meyers. But as self-appointed stewards of the design world, their commitment to the field is far more than a matter of amassing an inventory.

“It’s about creating a global community that collects design,” says Snyderman, “and about getting institutions, trustees and patrons involved in the same way they are with contemporary art.” And compared to contemporary art, Meyers notes, design is still a bargain. “In the last ten years, so many of the best masterpieces have sold for around one hundred thousand dollars or less,” he says. “So we’re really the penny-candy store.”