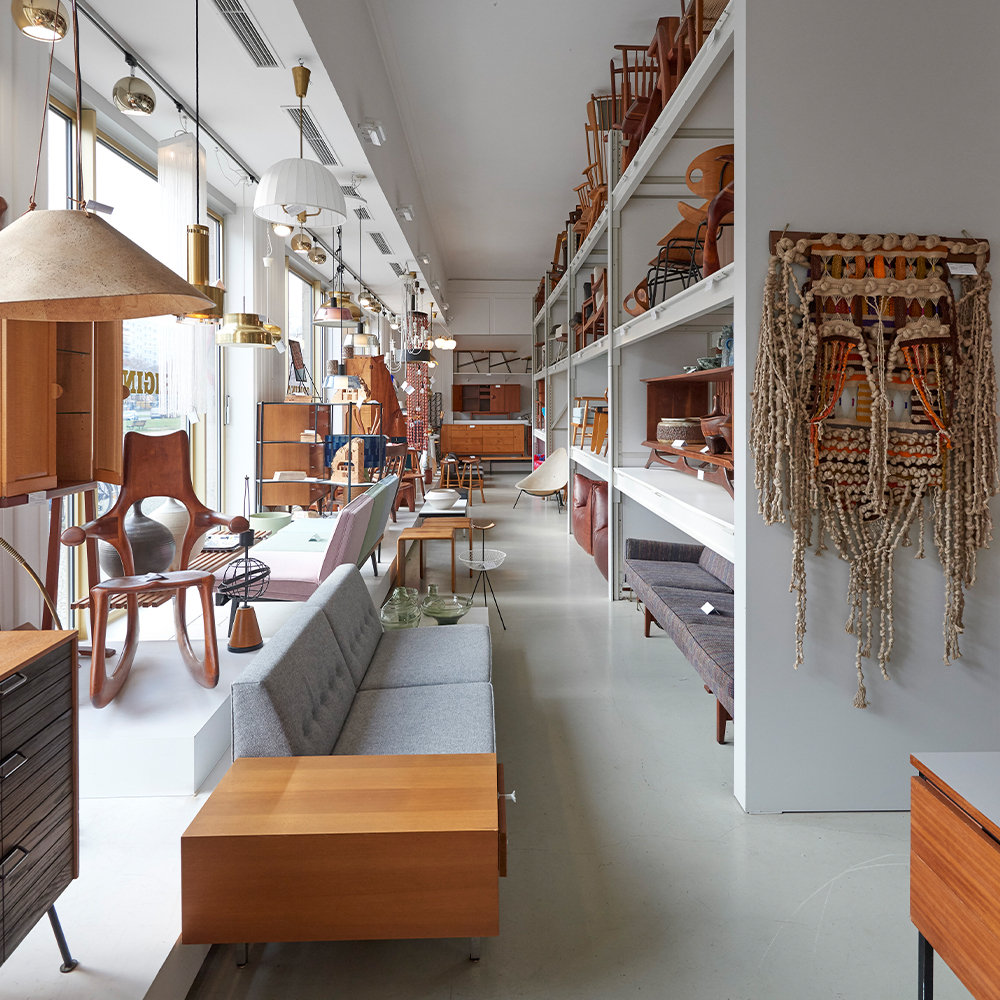 His two gallery spaces in the German capital bring together thousands of pieces ranging from mid-century classics and Murano glass to covetable reproductions manufactured in-house.

August 28, 2022There are dealers who over time become collectors. With Lars Triesch, founder and owner of Original in Berlin, it was the other way around. He started out as a collector and then became a dealer. “I was fascinated by design even as a teenager,” says Triesch, “especially American modernist design.”

Back then, he was a musician by trade, playing drums in an indie rock band influenced by West Coast surf punk and 1960s psychedelic rock. “At eighteen, I was driving a 1956 Chevy and reading Charles Bukowski’s poetry,” he recalls. “I liked the whole American lifestyle, especially the California spirit.”

An interest in the architecture of the postwar era and how those unpretentious but remarkably elegant homes were furnished followed almost as a matter of course.

What Triesch calls the “first serious piece” in his collection was Danish — an S-Chair by Verner Panton from the late ’60s — but his love of American mid-century design remained undiminished. “It’s no coincidence that the era’s great architects — Frank Lloyd Wright, Rudolf Schindler, Richard Neutra — all eventually ended up in California,” says Triesch. “It had a social climate that was ripe for a new, unconventional and open way of building.”

The Case Study Houses commissioned by Arts & Architecture magazine, the designs of Charles and Ray Eames, the photography of Julius Shulman — these continue to be the centers of gravity in Lars Triesch’s world, although, like the universe, his world is ever expanding.

Triesch opened Original in Berlin in 2010, not long after moving to the German capital from Koblenz, in the west of the country. The shop has since established itself as a place to find such rare items as Daniel Wenger lounge chairs, a Henry Glass stool and armchairs by Czech designer Jindřick Halabala, names largely known only to connoisseurs.

These are complemented by modernist American pieces by the likes of Adrian Pearsall, Harvey Probber and Paul McCobb, as well as Scandinavian, French and Italian design, be it Kerstin Hörlin-Holmquist’s captivating Eva and Adam chairs for Nordiska Kompaniet, a Charlotte Perriand table for the Les Arcs ski resort or lamps by Afra and Tobia Scarpa or Achille and Pier Giacomo Castiglioni.

The gallery’s grand showroom — in the Friedrichshain district of what was once East Berlin — is located on the ground floor of a Soviet Realist–style apartment block that was itself designed to impress, with its immense volumes, porticoed main entrance and columned facade. Now a listed building, it forms part of the monumental Communist-era Karl-Marx-Allee, the starting point for the workers’ revolt of June 17, 1953.

Step inside the 5,400-square-foot space today, and in addition to floor-to-ceiling shelving filled with design classics, you’ll encounter three more of the owner’s particular passions — decorative Murano glassware, metalwork by Carl Auböck and ceramics by American artist Stan Bitters. After discovering the work of Californian woodworkers that emerged in the ’60s, Triesch developed a keen interest in quality traditional craft pieces.

He may have gone from collector to dealer, but Triesch remains an enthusiast first and foremost. Three hundred feet from his gallery, he has opened a second showroom, in which he presents his New Originals collection: authorized reproductions that are handcrafted to order by highly skilled artisans. Currently, it features seating designed by Mira Nakashima and a sofa, credenza, tables and even a letter box by the late Californian architect Ray Kappe, who is best known for the dramatically cantilevered, open-plan Pacific Palisades home he constructed for himself in the mid-’60s.

Triesch’s domestic life shows how seriously he takes his passions. In Kleinmachnow, just southwest of Berlin, he recently had a house built for himself and his family. Its designer? Ray Kappe. It was one of the last projects he conceived before his death in 2019.

Here, Triesch talks about his favorite design pieces, his approach to restoration, partying with ceramist Stan Bitters and chancing upon a trove of Charlotte Perriand treasures in the south of France.

Your showroom is truly impressive. Do you know how many design pieces are in it right now?

Around two thousand. We’re looking for somewhere even larger, but Berlin’s industrial property market is rather overheated at the moment.

You started out as a collector. Have you ever regretted selling a particular piece?

To be honest, yes. I once owned a beautiful hand-carved door by the sculptor Harold Balazs. He made just three hundred of them over a period of decades. I’d like to still have that.

And are there pieces here that you wouldn’t want to part with?

I’ve an old Lotus chair by Dan Wenger that’s genuinely not for sale. He only produced about two hundred of them, in the sixties and seventies, and most of them no longer exist. Dan and his wife, Katherine, are now close friends of the family. So, it’s not only rare but also has a very personal meaning for me.

You also offer furniture restoration at Original in Berlin. What is your approach?

The ideal is always something that’s in unadulterated original condition, with the charm of patina. But sometimes, a chair or table might need minor repairs. These are taken care of by two highly skilled colleagues. We can also recover or reupholster if required.

In your search for design rarities, you must travel a lot. Have you ever experienced anything that truly beggared belief?

Once, I was not far from Bordeaux when an intermediary led me to a barn in which fifteen original shelving units by Charlotte Perriand were being stored. He’d found them in Mali. I think I’m right in saying it was during the civil war, when militant Islamists took over, and they put him in jail for a couple of days just because he had a lot of cash with him to buy the furniture.

As part of your New Originals collection, you offer pieces by Stan Bitters, a ceramist the New York Times described in 2014 as “one of the art world’s best kept secrets.” What attracted you to his work?

I’ve always had an interest in ceramics, and Stan Bitters’s work has a very special aura. His sculptures and murals are highly sought-after. I like the way they blur the line between art and architecture. And going back to your question about what I’ve experienced on my travels, I was once invited to Bitters’s workshop in Fresno, a rather less glamorous corner of California. Bitters had invited people to a large dinner party, and after the meal, a full orchestra played Bach in this big space full of kilns and workbenches. That was an unforgettable moment. 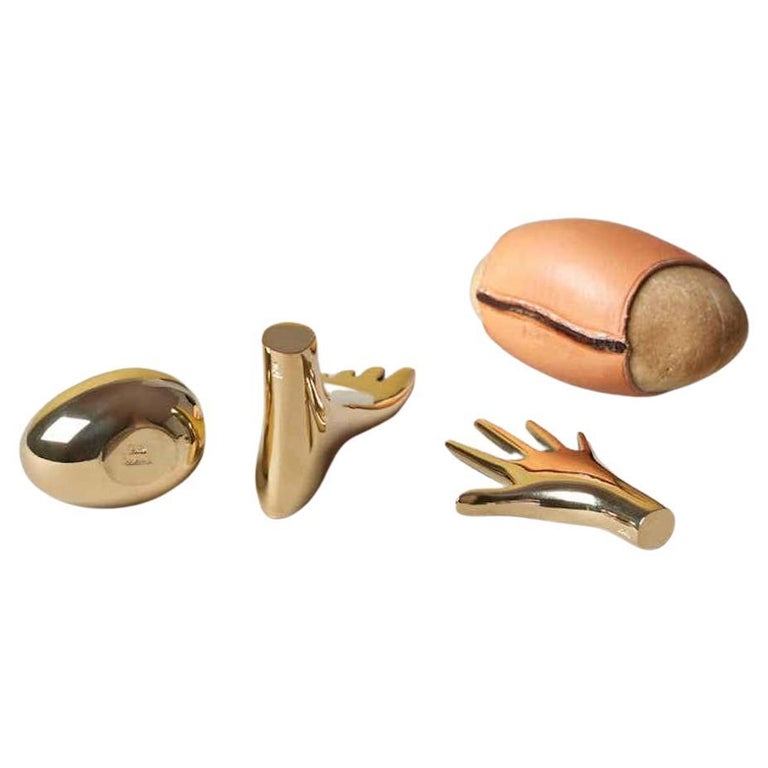 “One of Carl Auböck’s most famous designs, known as the Walter Gropius set, as the Bauhaus founder had one of these lying on his desk. It’s a beautiful gift for everyone who’s into design and architecture.” 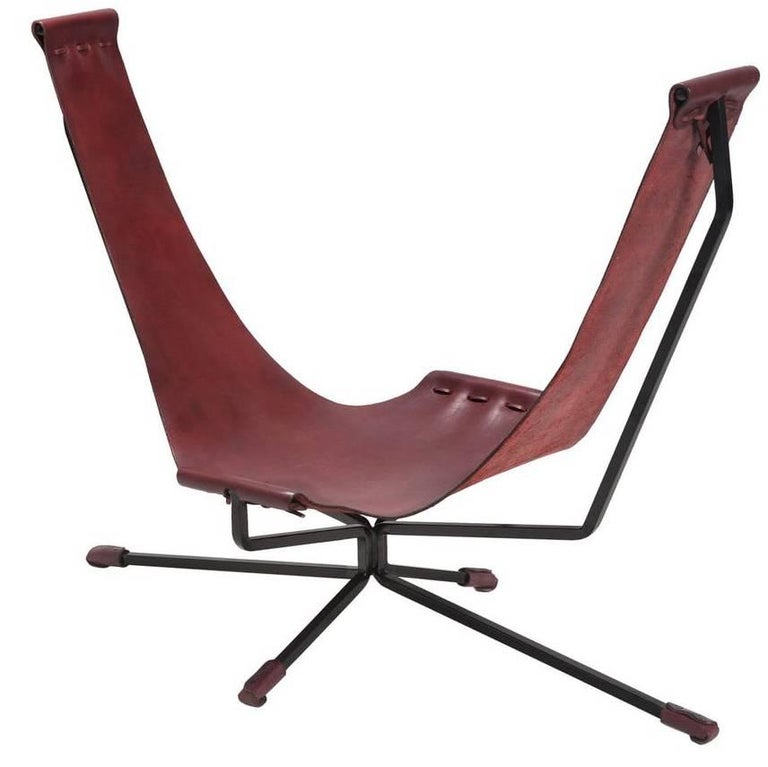 “This chair unites simplicity, craft perfection and comfort. The design has been handmade in Santa Cruz since the late sixties. It brings a unique California hippie vibe to your home.” 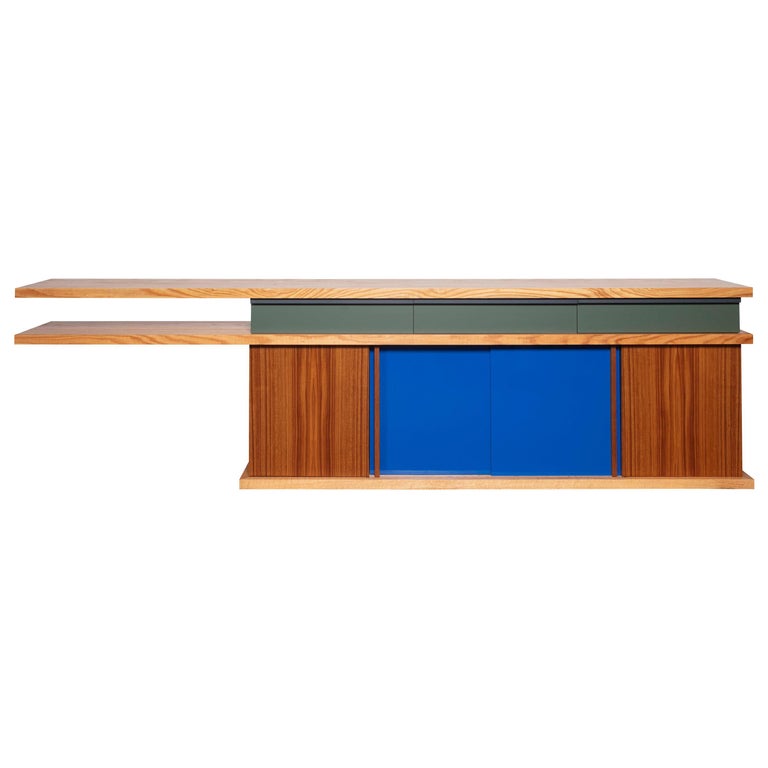 “Our own production, which has never been released before. This masterpiece was only made once, in the sixties, for the famous Kappe residence in Pacific Palisades, Los Angeles.” 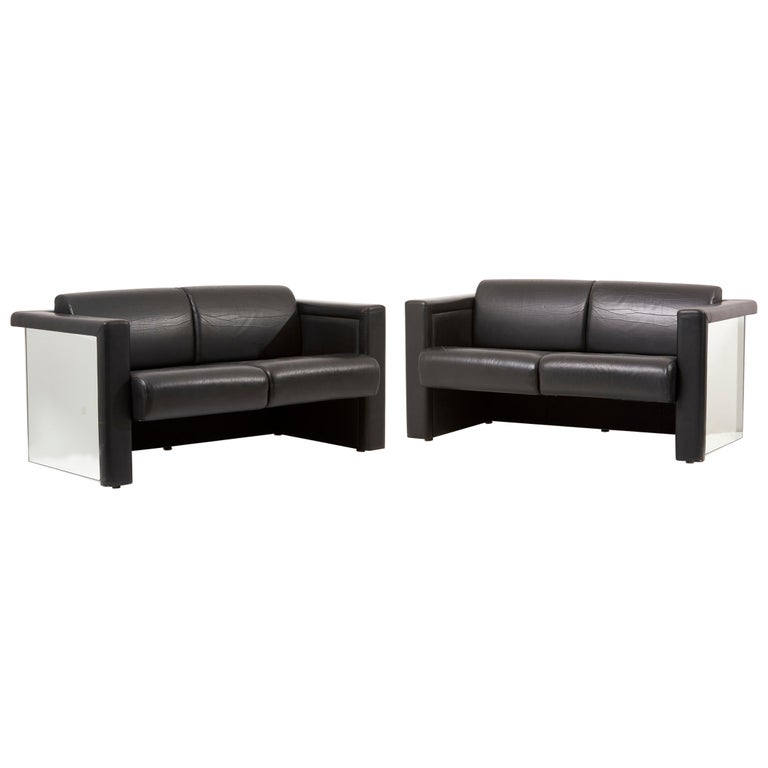 “This is furniture that is already on the edge of being art. It’s very delicate and intellectual.” 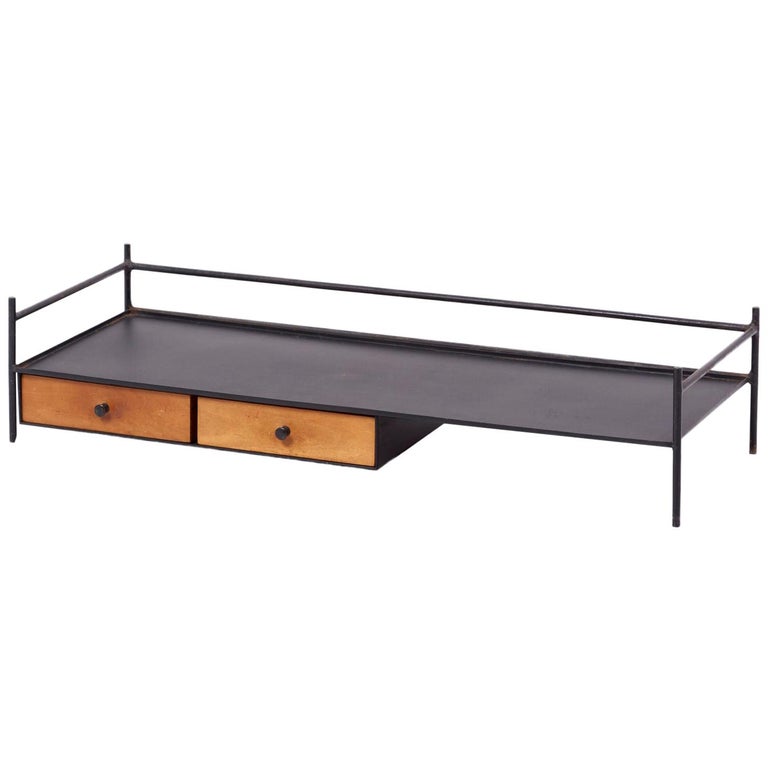 “The McCobb pieces for Bryce are very rare and hard to find. So, we’re particularly happy to have this piece in our collection.” 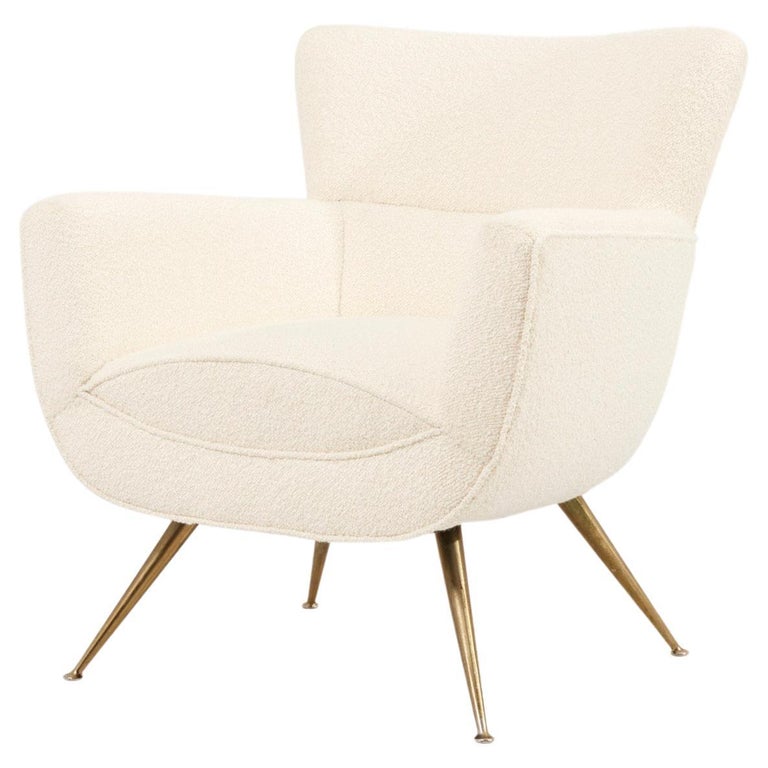 “A very sculptural and rare chair that we updated for the twenty-first century with new upholstery in a Dedar bouclé.” 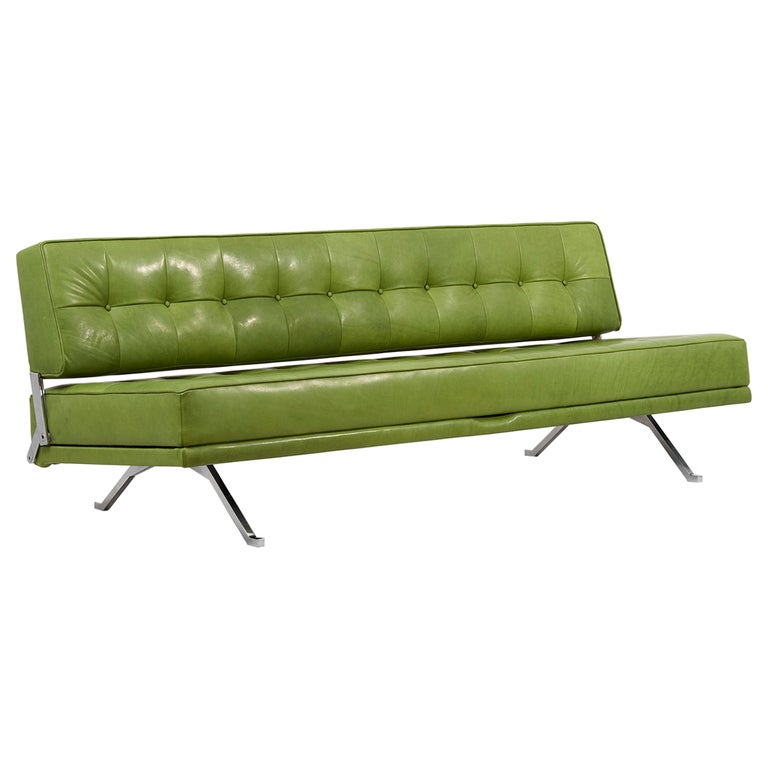 “I’d always liked this green leather from the Danish manufacturer Camo but was looking for some time for an opportunity to use it. I purchased this sofa from a private collector in Austria, and the leather takes the fantastic design by Spalt to another dimension.” 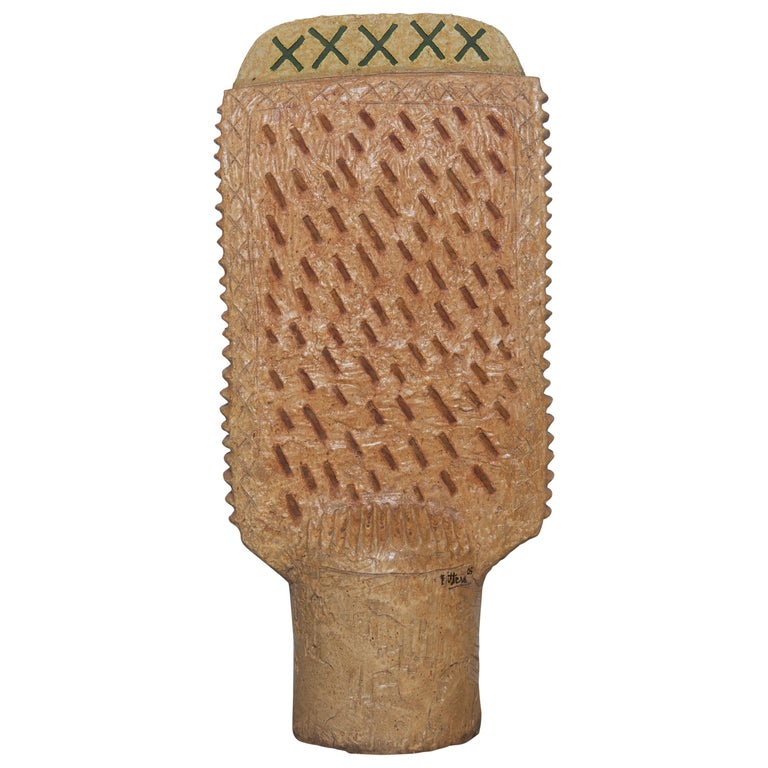 “When I visited Stan Bitters at his workshop in Fresno, California, for the first time, in February 2018, I immediately fell in love with this large, stunning sculpture. It’s enormous in both size and weight and is one of the pieces we presented at our Stan Bitters exhibition in Berlin in March 2020.”