Back to the Future with Pierre Cardin

When designing fashion, furniture or anything in between, the prolific Pierre Cardin was always forward thinking. Here, Los Angeles vintage-fashion dealer Rachel Zabar lauds his vision and discusses her special collection of his mid-century clothes — modern, flattering and no less than transformative.

Pierre Cardin may have put his name on everything from fashion to furniture, autos to airplanes and toiletries to toilets, but the true signature of the legendary designer, now 92, has always been his focus on the future. “He is a visionary,” says vintage couture dealer Rachel Zabar, who is offering a collection of classic midcentury Cardin clothing on her 1stdibs storefront. “In 1959, he was the first couturier to do ready-to-wear. Then he created collections for department stores in America and Japan. He liberated young women by designing modern clothing that allowed them to move. He pioneered unisex clothing and created the lexicon of Space Age fashion.”

Over the course of six decades, Cardin built an empire that not only includes hundreds of fashion and product licenses, but also ownership of the Maxim’s restaurants throughout the world, the fortified Provençal château of the Marquis de Sade and the exuberant Palais Bulles, a bubble-shaped house near Cannes that was built in 1989 by architect Antii Lovag. (In 2011, he put all his holdings up for sale at 1 billion euros. To date he has had no takers.)

It all began humbly enough. Born Pietro Cardin, the designer was raised and educated in France after his parents emigrated from Italy. Following an apprenticeship to a tailor in Vichy, he moved to Paris in 1945, where he studied architecture and worked for the fashion houses of Pacquin, Schiaparelli and Dior before establishing his own atelier in 1950. 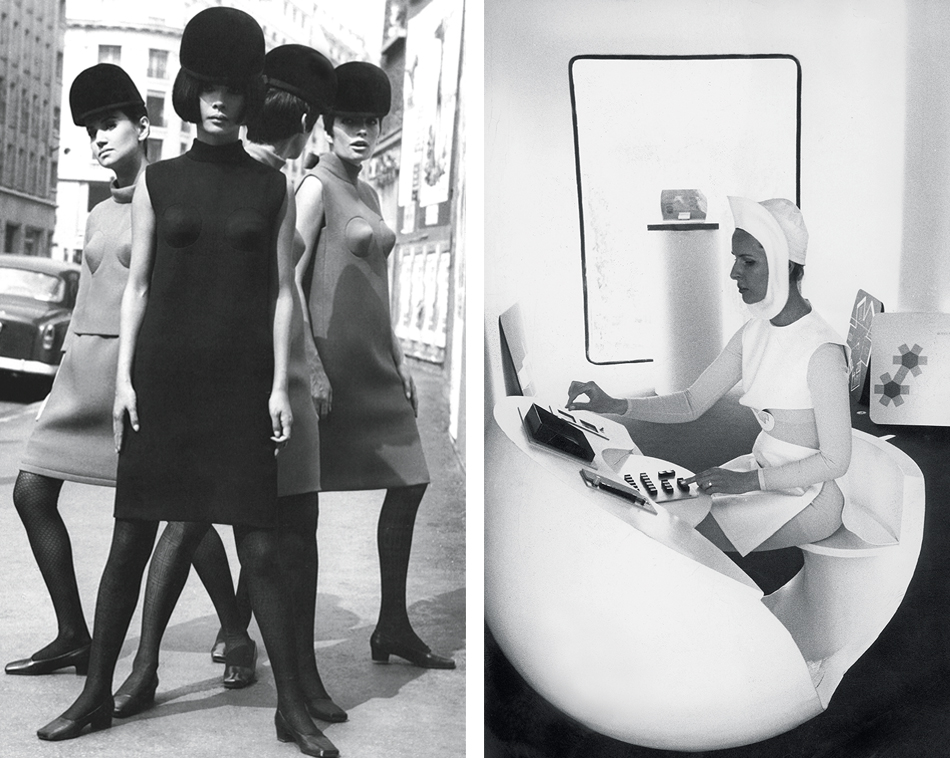 Left: Cocktail dresses with conical breasts from 1966. Photo by Yoshi Takata from the Pierre Cardin catalog, published by the Carl Sozzani gallery, Milan. © Pierre Pelegry. Right: Photo of a model at a futuristic desk in an infirmary pod that was taken in 1970. © Archives Pierre Cardin

In the swinging 1960s, Cardin’s space age design led an international pack of fashion progressives influenced by the Mod movement including Paco Rabanne, André Courrèges, Mary Quant and Rudi Gernreich, that changed the shape of the industry. Cardin’s work was architectural, streamlined and minimalist: A-line shapes with keyhole necklines and bold geometric appliques. His omnipresent logo — a swirling black P that cleverly created a white C in the negative space around it — was a commercial touch that horrified fashion’s stuffed shirts.

“He knew what the youth quake wanted,” Zabar says, speaking to Introspective in her Los Angeles home and office, a space decked out with outsider art, a Tony Duquette paper mache and jeweled angel sculpture, Thonet chairs covered in Jack Lenor Larsen fabric and velvet Pucci pillows. “He knew construction and fabric, but he also believed in mixing materials like gabardine with vinyl in an haute couture garment. He understood how to make those materials look beautiful with all the hallmarks of a new age.” (Zabar is not the only fan: In a piece that recently appeared on British Vogue‘s website about the new Pierre Cardin museum in Paris’s Marais district, legendary fashion journalist Suzy Menkes wrote: “throughout his career, the designer created glamorous evening clothes that could grace a red carpet today.”)

For Zabar, the easiest way to illustrate is to play dress up. She quickly slips out of the room — and out of her 1960s Marimekko zippered shift and quilted Chanel Mary Janes. In what seems like a matter of seconds, she re-emerges in a 1968 Cardin Bubble dress in a very 2014 shade of orange. “Cardin’s designs are like no one else’s, modern yet feminine; they’re flattering and fit like a dream,” she says. “You put this on, and you’re transformed.”

At Zabar’s by-appointment Los Angeles showroom, a number of vintage Cardin pieces are on display, including, from left,  a 1969 space-age pink satin mini dress, a 1967 wool trapeze accordion pleat coat dress and a circa-1968 pleated silk mini dress. Photo by Samuel T. Frost 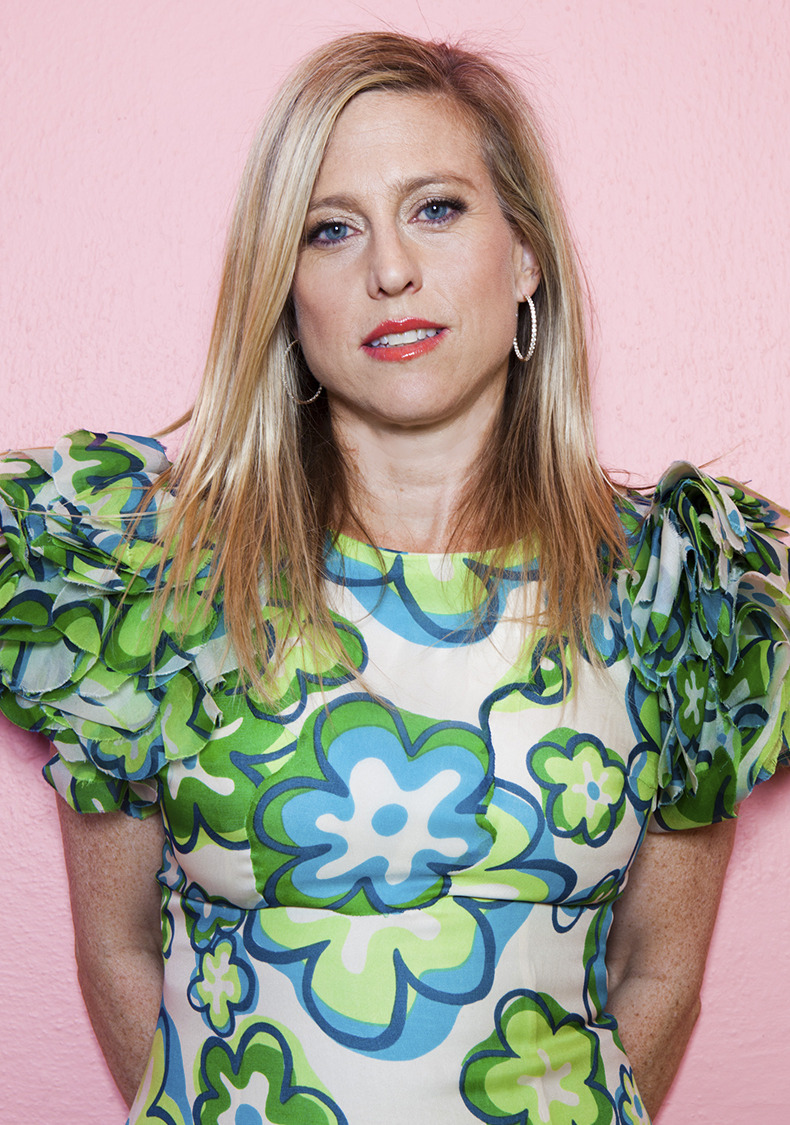 Zabar, seen here wearing Pierre Balmain haute couture from the 1960s, became fascinated with Cardin after buying a bed and credenzas from a 1970s furniture collection he designed. Photo by Samuel T. Frost

“Cardin’s designs are like no one else’s, modern yet feminine; they’re flattering and fit like a dream. You put this on and you’re transformed.”

She disappears again to don a 1960s above-the-knee swing coat with diagonal accordion pleats, a padded tubular neckline and a weighted hem. “Mia Farrow wore this design in a Life photograph with Frank Sinatra,” she says, twirling in a swirl of fabric. “Hers sold for twenty-thousand dollars at auction.” One quick change later, and she’s modeling a 1982 Cardin A-line suit in Harris tweed with a peplum jacket and a snap-on shoulder cape. “It’s a ladies-who-lunch suit,” she says. “And it still looks relevant.”

Zabar should know: She earned her fashion stripes during the shoulder-padded 1980s. Growing up on the Upper West Side of New York, near Zabar’s — her family’s famed gourmet-food market — she was inspired by Molly Ringwald films and haunted flea markets and the designer-vintage boutique Allan & Suzi. “I would take every dime I had there, and they gave me such an education,” she recalls.

After graduating from Brown, where she studied fine art (painting) and history, Zabar won a scholarship to work in the couture archives at Yves St. Laurent in Paris: “I was twenty-one and thought he was that fuddy-duddy fashion designer,” she admits. “Then I got to hold and touch and scrutinize every gown he made.” Zabar earned an MFA in film at NYU and, after moving to L.A. in 2003, a screenwriting degree at the American Film Institute. Four years later, hating the solitude of that profession, she took a booth at a flea market selling furniture, home decor and art.

“I discovered that jewelry and clothing were a lot easier to transport and there was less breakage,” laughs the collector and dealer, who today uses a carefully culled network of expert re-weavers, dyers and cleaners to rejuvenate vintage pieces. (She also has her own formula for neutralizing the smell of mothballs: “Layer an airtight box with kitty litter, tissue paper, the garment and baking soda in a nylon stocking. Place half a lemon in a dish on the side and let it all cook for three days,” she says.)

She became intrigued with Cardin’s clothing after discovering his furniture when she bought a bed and credenzas from his 1970s furniture collections. Now, she is a self-taught Cardin-ologist, poring over old copies of L’Officiel, looking at vintage celebrity photos and searching the Internet to authenticate pieces. Finding a Cardin tag — or the customer number added beneath it on couture pieces — is just the beginning.

“He was so prolific,” Zabar sighs. “He’d create three hundred looks a season instead of one hundred and had dozens of labels and licensing all over the world. Some say he did himself a disservice with all those deals — there was even a book about him called The Man Who Became a Label — but he has a singular, brilliant mind.” And therein lies a mystery, Zabar concludes: “Did he just make things that looked great then and still do now, or could he really see into the future?”