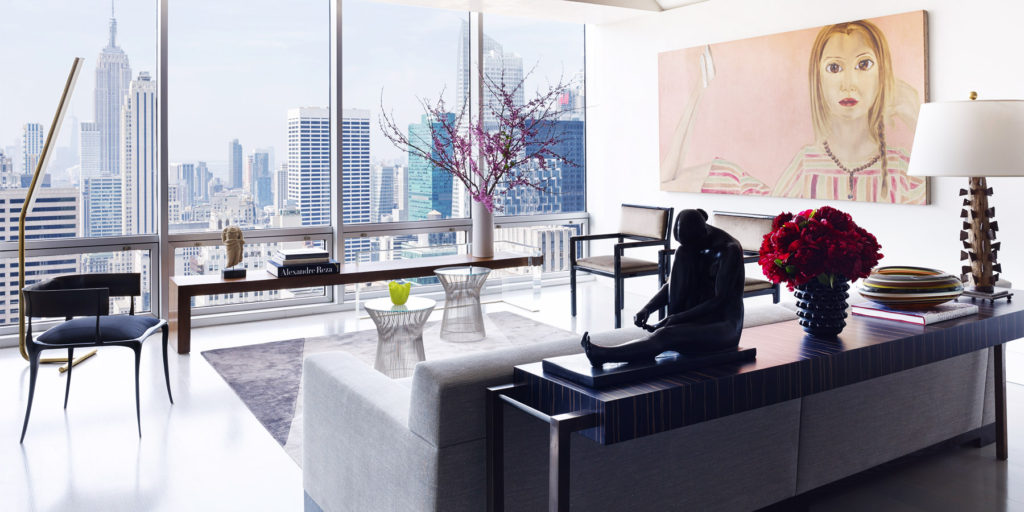 From menswear to posh homes to luxury stores, the Architecture at Large founder dives into every endeavor with excitement and an open mind. 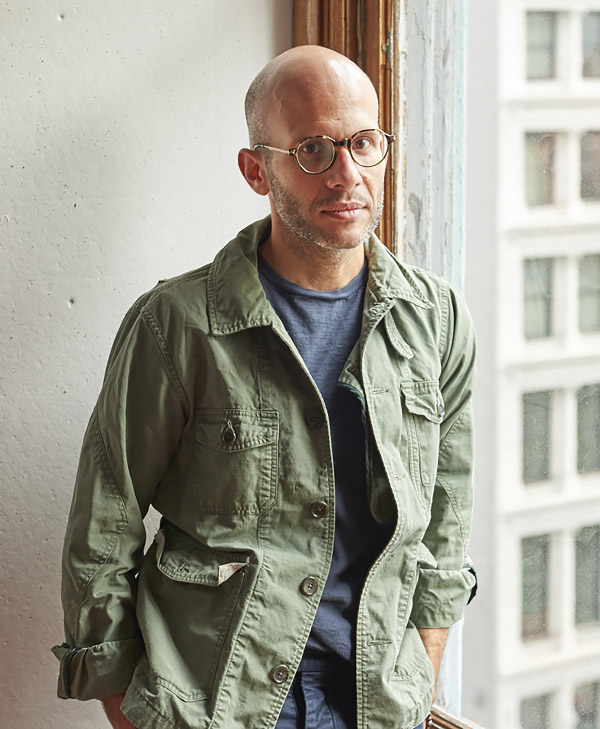 September 5, 2016Maison&Objet Americas named New York–based Rafael de Cárdenas its 2016 Designer of the Year. The projects undertaken by his firm, Architecture at Large, include work for Baccarat and Nike as well as luxe residences in the U.S. and Europe (portrait by Tim Barber). Top: For the living room of an apartment in Midtown Manhattan’s Olympic Tower, de Cárdenas sourced Michael Anastassiades‘s Lit Lines floor lamp from Nilufar and designed the custom bench and console himself (photo by Björn Wallander).

My interest is not in design or architecture,” insists Rafael de Cárdenas as we sit in his Soho office one afternoon. It’s a surprising statement coming from the founder of the New York–based firm Architecture at Large, who has designed such aesthetically impressive Manhattan interiors as Baccarat’s eye-catching Madison Avenue store, a new East Village space for the trendy eatery Asia de Cuba and Nike’s private 45 Grand fitness studio in Soho, as well as a London boutique for the jewelry designer Delfina Delettrez, among other notable projects. And if that weren’t enough, de Cárdenas was chosen by Maison&Objet Americas as its 2016 Designer of the Year, which honors new and emerging talent. Is he just being contrary?

“My interest is in human behavior,” he explains, “or why I’m excited by Madonna or Prince’s “Little Red Corvette.” I’ll see The Bitter Tears of Petra von Kant,” he adds, referring to Rainer Werner Fassbinder’s 1972 film, “and I’ll want to do a design based on that. I take pictures of what’s on the screen and send them to the people I work with.” Yet de Cárdenas’s practice is neither esoteric nor academic. “I have a very commercial practice,” he says. “We have to please a lot of people. Achieving that while referencing Paris Is Burning is what we do.”

And he does it very well. In Delettrez’s small shop in London’s Mayfair neighborhood, for example, he used mirrors to create an infinity effect and faux malachite walls that allude both to luxury and jewelry. Asia de Cuba, with its mint-green suede walls, tufted banquettes and artificial ficus spray-painted mint and peach — the last, a custom-designed installation by artist Aaron Somers — is “very nostalgic,” de Cárdenas says. Its pastel colors suggest Cuban Art Deco, but the space also reminds him of the Russian Tea Room, “where I ate with my dad when I was a kid.” De Cárdenas’s design for the Baccarat store features a double-height entry space clad in faceted Macassar ebony and mirrored panels, references to the company’s legendary crystal-cutting techniques. 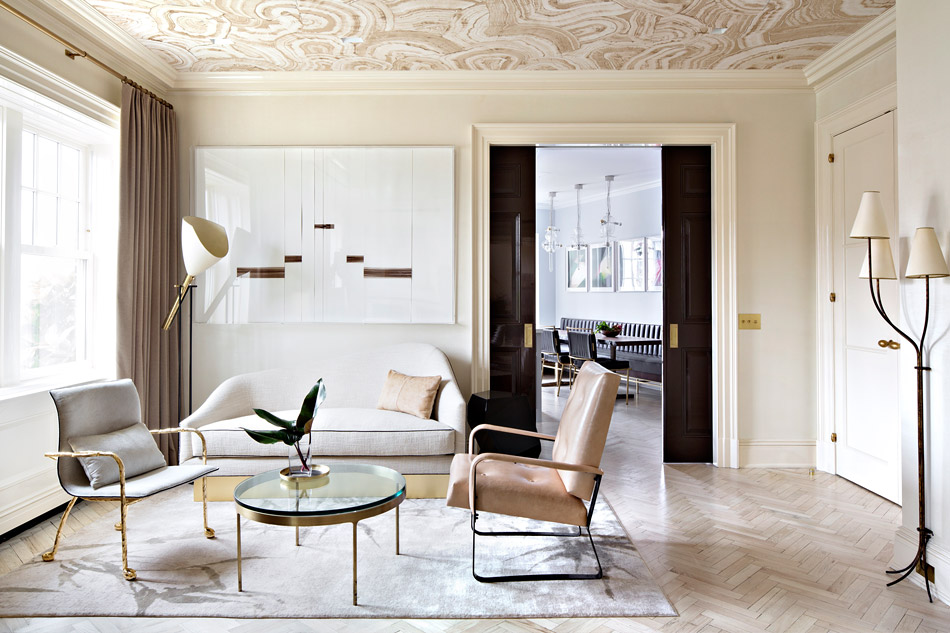 In the living room of a home on Horatio Street in New York’s West Village, a piece by artist Isabelle Cornaro hangs above a custom sofa of de Cárdenas’s own design, next to which sits an Ettore Sottsass lamp. A gold-plated Mattia Bonetti armchair (left) from Paul Kasmin Gallery and a Jacques Quinet armchair (right) from Maison Gerard flank the coffee table. Photo by Floto + Warner 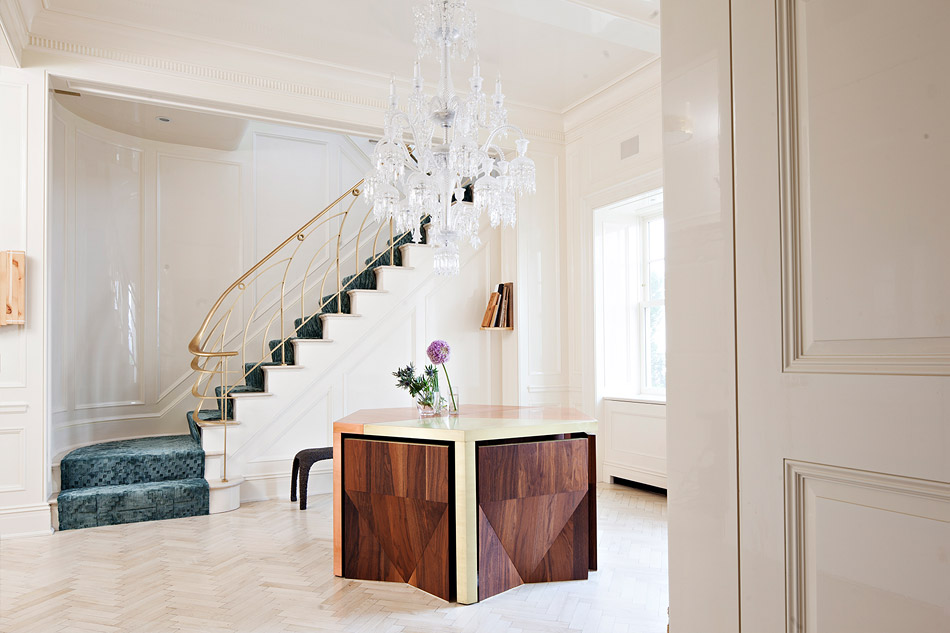 De Cárdenas hung a Baccarat chandelier over a custom-designed table and nested chairs of his own design in the entry hall of the Horatio Street home. Photo by Floto + Warner 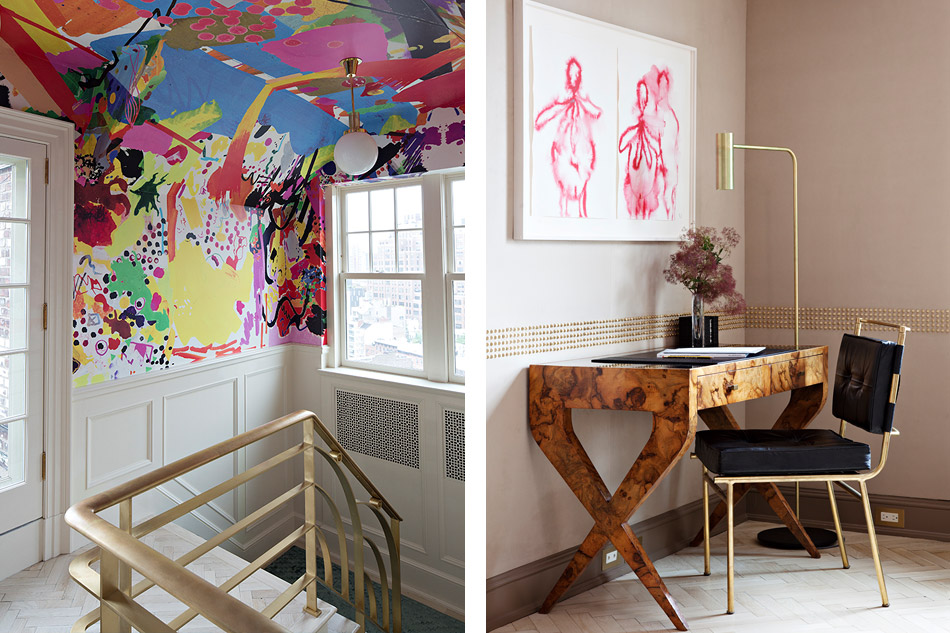 The architect enlivened two otherwise quiet corners of the Horatio Street apartment by deploying vibrant color on the walls; the artwork, at right, is by Louise Bourgeois. Photos by Floto + Warner 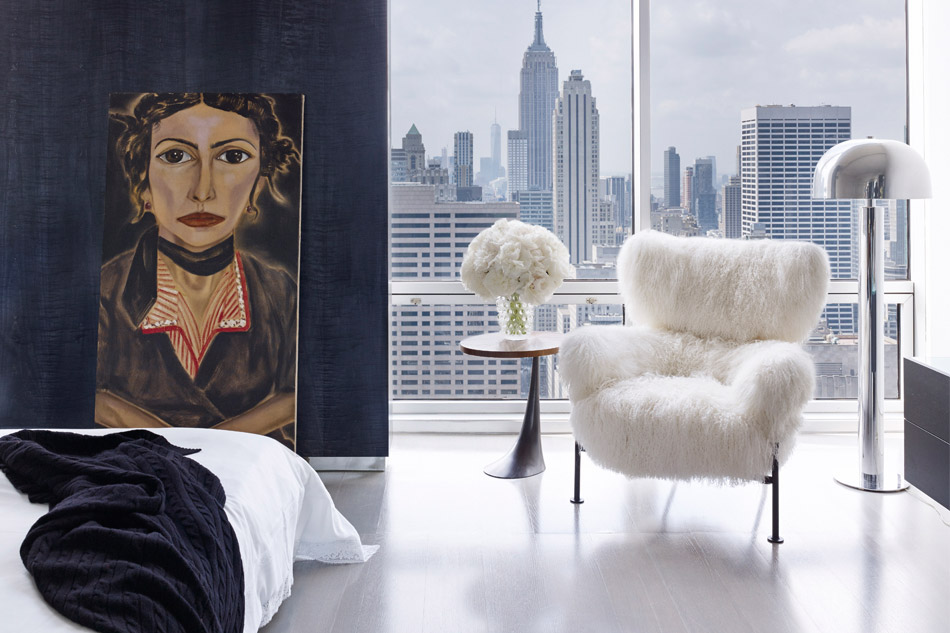 De Cárdenas’s neutral-colored, minimalist scheme at Olympic Tower divides the residence into three zones — lounge, study and private chambers — each of which capitalizes on and frames the soaring skyline views. In this bedroom, a chair by Franco Albini for Cassina sits next to a portrait of the singer Marisa Monte by Francesco Clemente. Photo by Björn Wallander 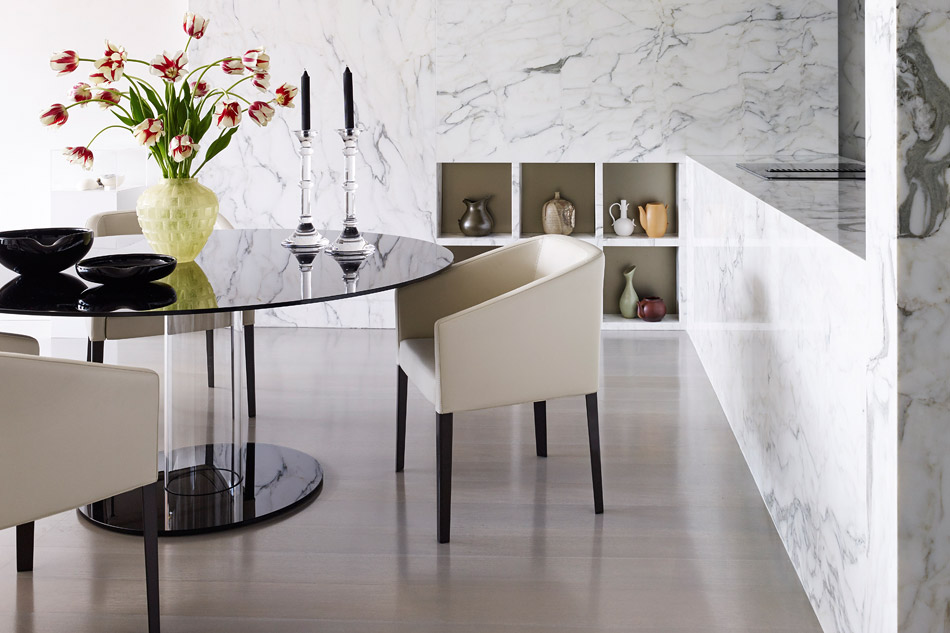 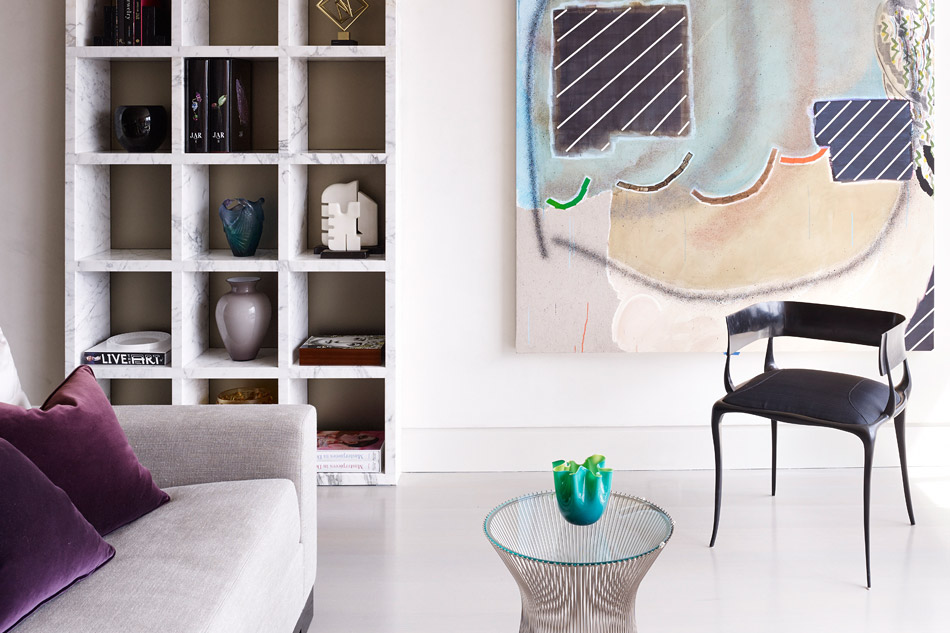 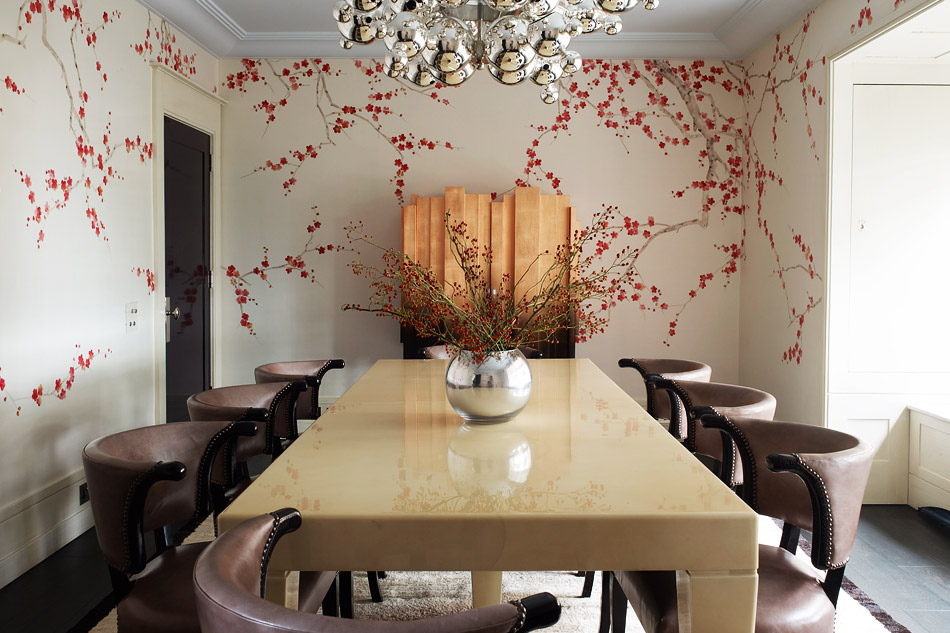 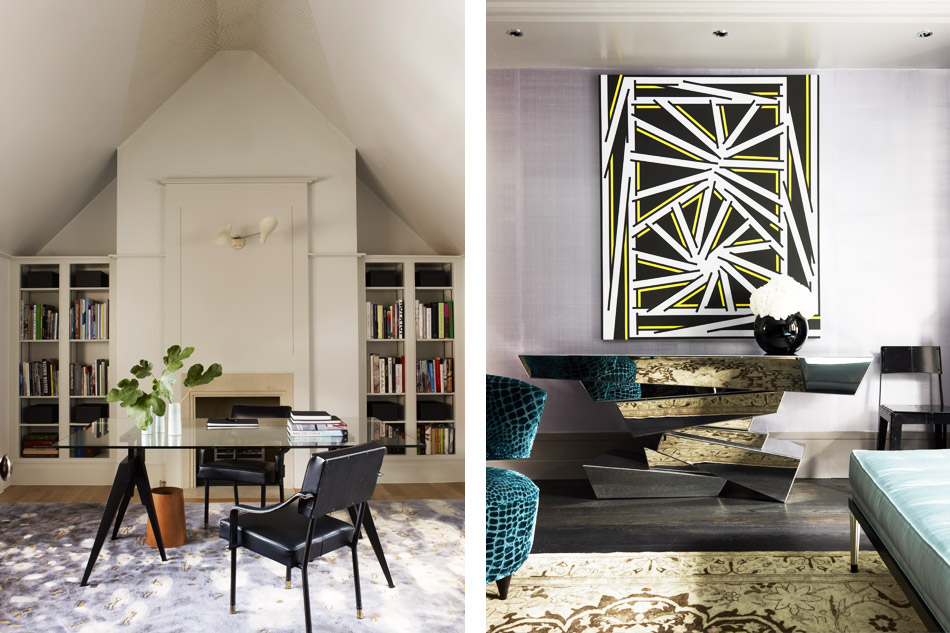 Left: In the Glebe Place library, a Shimmer rug by New York’s Fort Street Studio serves as a lustrous base for an assemblage of modern furnishings. Right: An Hervé Van der Straeten console forms a focal point in the living room, presided over by a Nicholas Krushenick artwork. Photos by Simon Upton 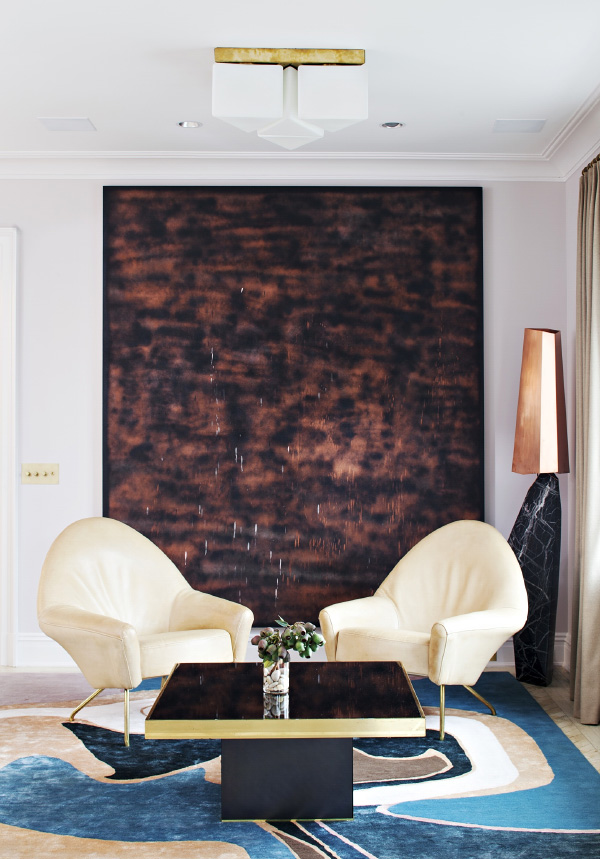 Back on Horatio Street, a seating area in the home’s master bedroom contains a pair of Joseph-André Motte armchairs from Demisch Danant cozying up to a 1970s French cocktail table from Flair. The Stilnovo ceiling light fixture is from John Salibello, and the artwork is by Sterling Ruby. De Cárdenas found the Giacomo Ravagli floor lamp at Nilufar. Photo by Floto + Warner

De Cárdenas’s path to architecture was not exactly a straight line. After high school, he enrolled at the Rhode Island School of Design, where he thought he would study glass-making. But his upbringing in the 1980s and early ’90s in New York City — where he reports he was “totally into the culture, with gender-bending club kids, Barbara Kruger” — led him to study fashion instead. He calls Madonna’s Blond Ambition tour “very influential. It was so polished, but still challenging. I’m kind of obsessed with making the subculture cosmopolitan.” He followed RISD with a stint at Calvin Klein, designing menswear, before deciding, at 24, that he “wasn’t ready to settle into a job.” So he applied to graduate school in architecture, not because he wanted to be an architect but because he thought it would be “a more thorough education.” At UCLA, he studied with Greg Lynn, an architect known for his innovative use of digital technology, and after he got his degree, he worked with Lynn on the competition for the design of the new World Trade Center, a process he calls “one of the greatest experiences of my life.” This led to two and a half years as a creative director for experience design at Imaginary Forces, the Los Angeles creative agency behind the iconic falling-man title sequence for Mad Men.

After that, de Cárdenas returned to New York, where he designed Pharma, an organic beauty products store on the Lower East Side, for the writer, editor and decorator Sara Ruffin Costello. (He says he had “two consulting mathematicians helping design complex shelf miters.”) He also did an apartment for the actress Parker Posey and a clothing store, both completed before he officially opened his own office, in 2006. Since then, he has designed projects as edgy as a 2008 temporary performance space in Soho that he wrapped in more than 5,800 feet of Day-Glo masking tape (“I was interested in dazzle ships,” he says, referring to the bold camouflage patterns on World War I British naval ships). He has also created, for the Johnson Trading Gallery, a line of brightly colored geometric furniture resembling pixelated video game characters that debuted in 2011; a graphic, sawtooth-patterned fabric for Rivieras’s Summer 2013 collection of slip-ons; and blankets for a fall 2013 outdoor event at Philip Johnson’s Glass House, in New Canaan, Connecticut. 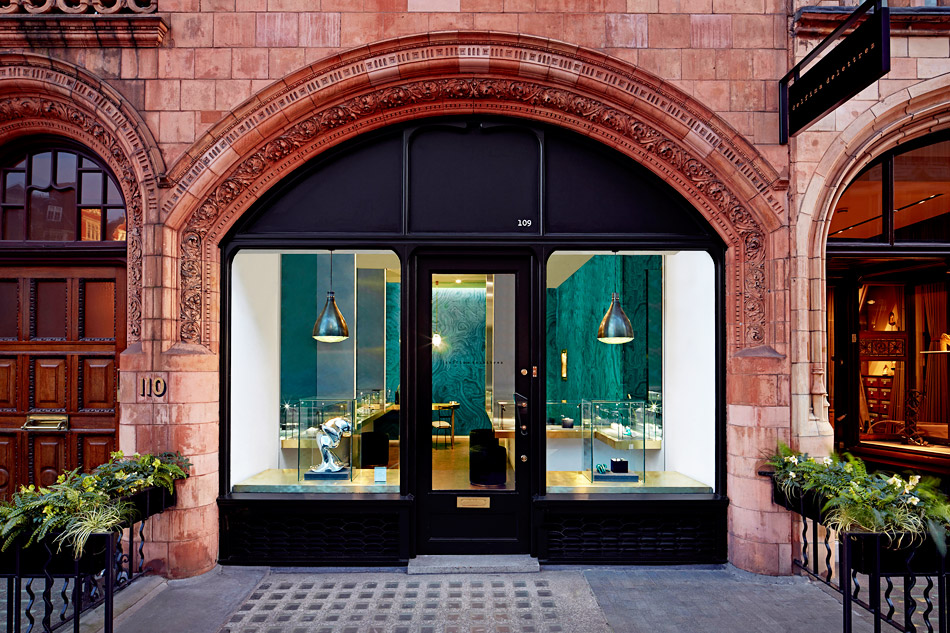 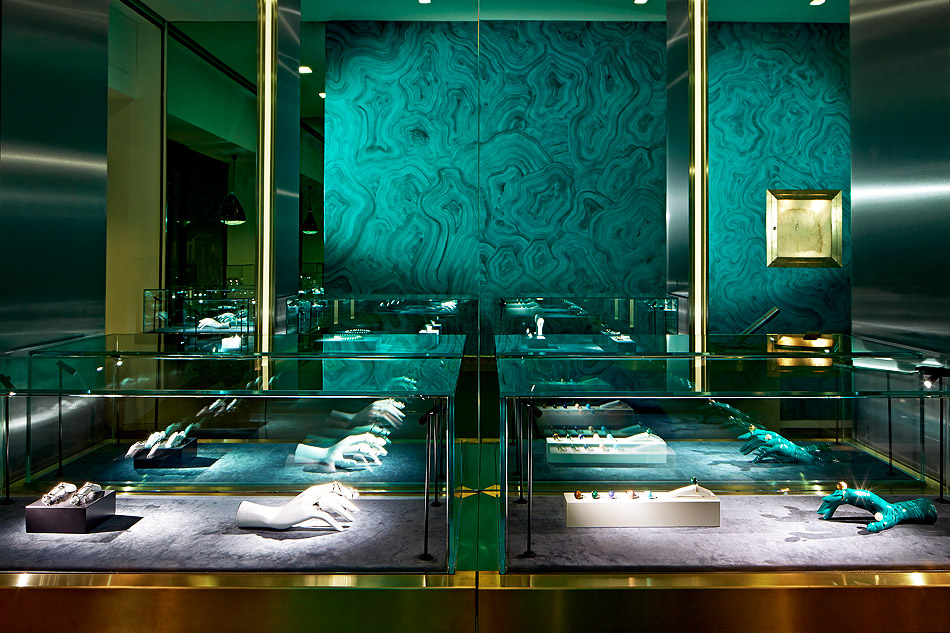 Faux malachite covers the back wall of the Delettrez boutique, where a staircase leads down to a lounge. Mirrored wall panels behind the display cases give a sense that the space goes on forever. Photo by Mark Cocksedge 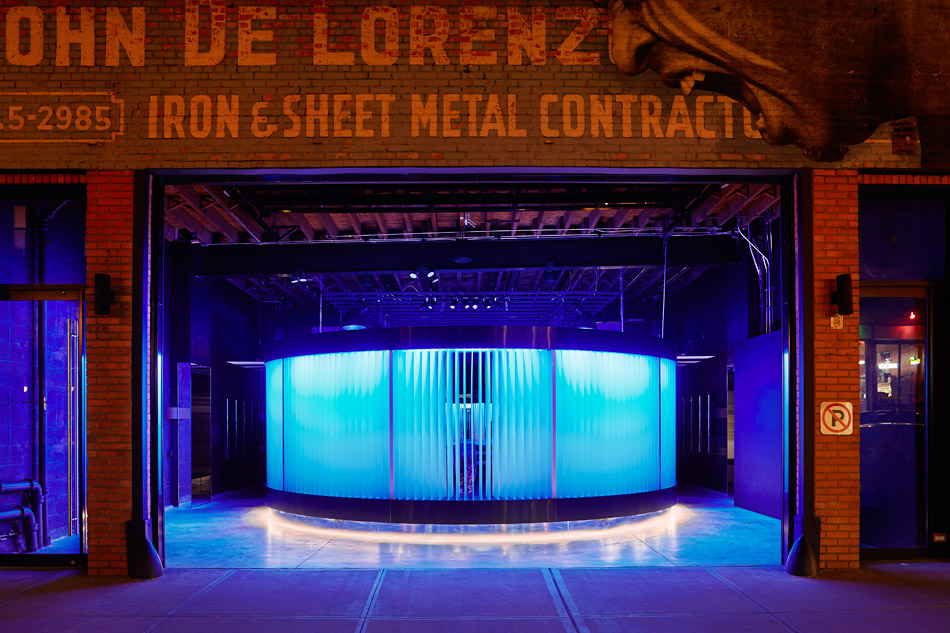 For Nike’s invitation-only fitness studio and showroom in a former metalwork shop in New York’s Soho, de Cárdenas designed a gym area that sits behind a glowing curved wall of frosted-acrylic fins. Photo by David Allee 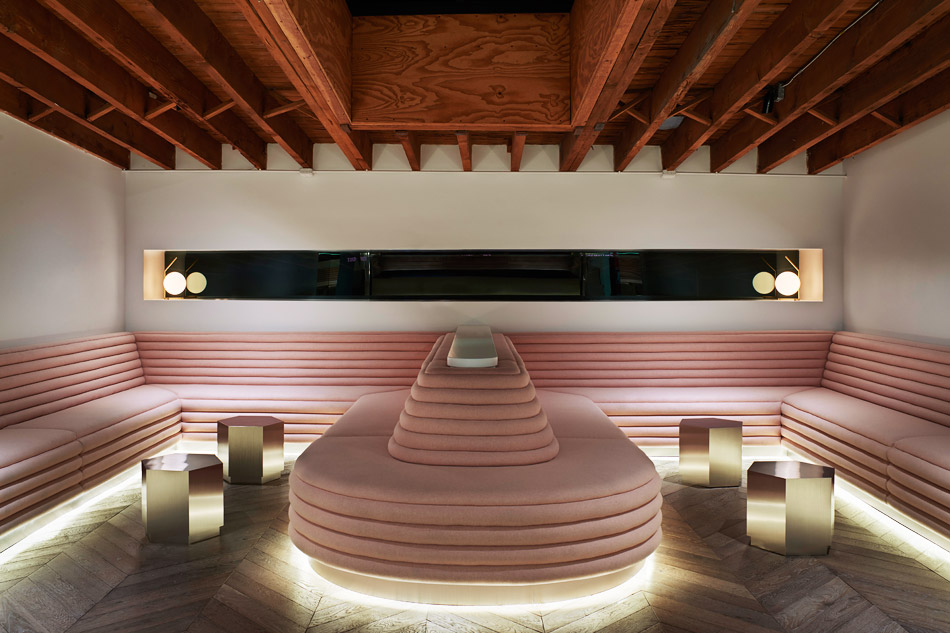 Located up a discreet set of stairs, the lounge and showroom at Nike’s 45 Grand offers visitors a place to relax, with plush pink banquettes upholstered in Kvadrat’s wool Divina MD. Photo by David Allee 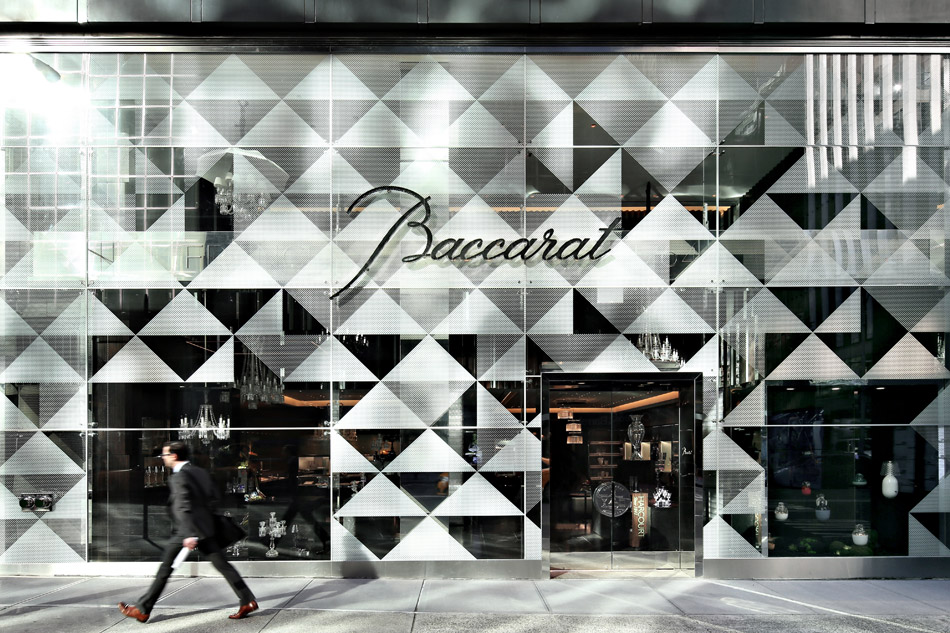 The patterning on the bright, two-story fritted-glass facade of the Madison Avenue flagship de Cárdenas designed for Baccarat in New York suggests the facets of the cut crystal that made the French company famous. Photo by Floto + Warner 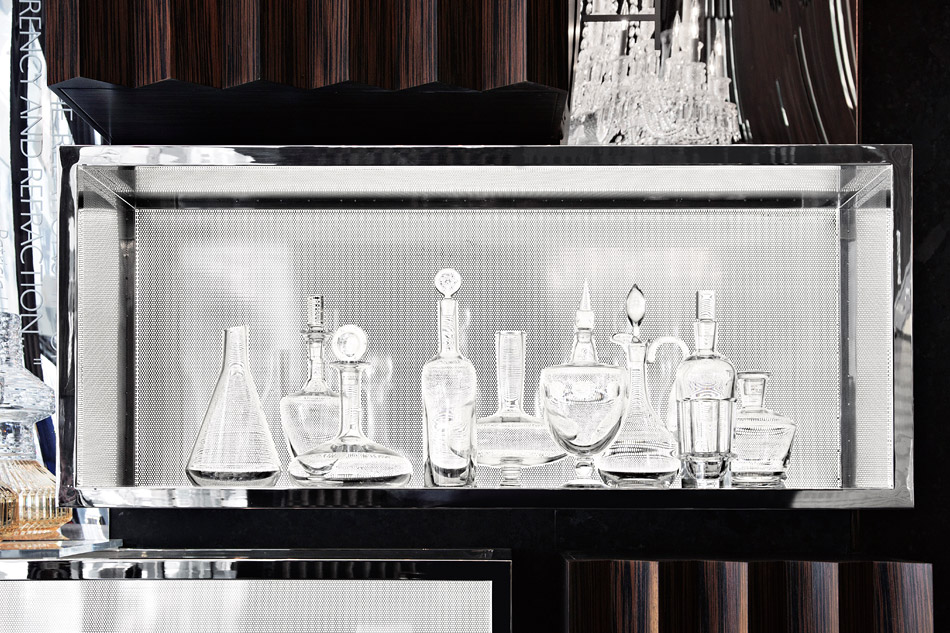 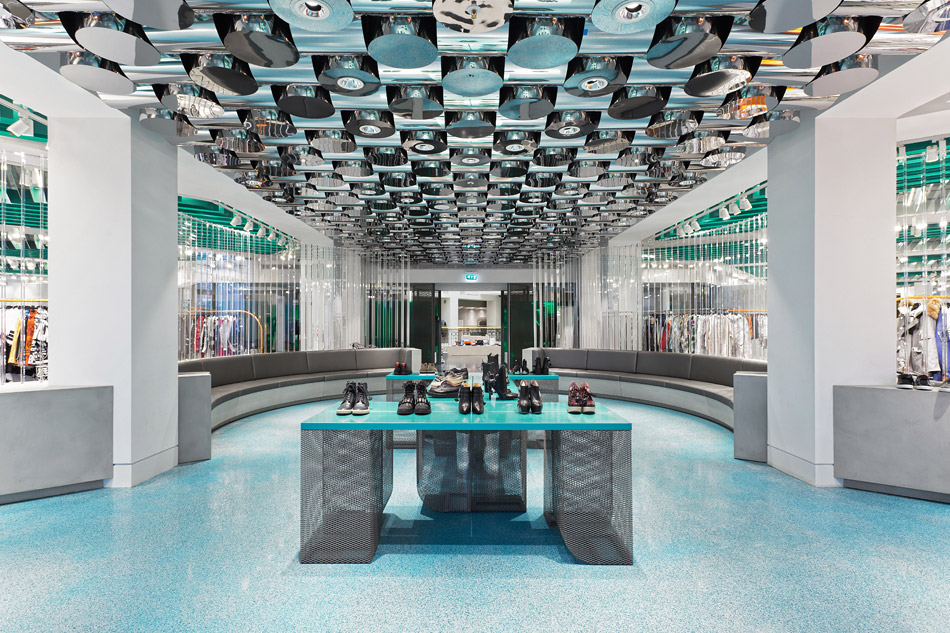 Earlier this year, de Cárdenas completed a boistrous redesign of St. Petersburg’s historic Au Pont Rouge department store. One of the most distinctive elements of the scheme is the ceiling, where a sea of sculptural light fixtures contrasts with boldly colored anodized aluminum. Photo by Alexey Bogolepov 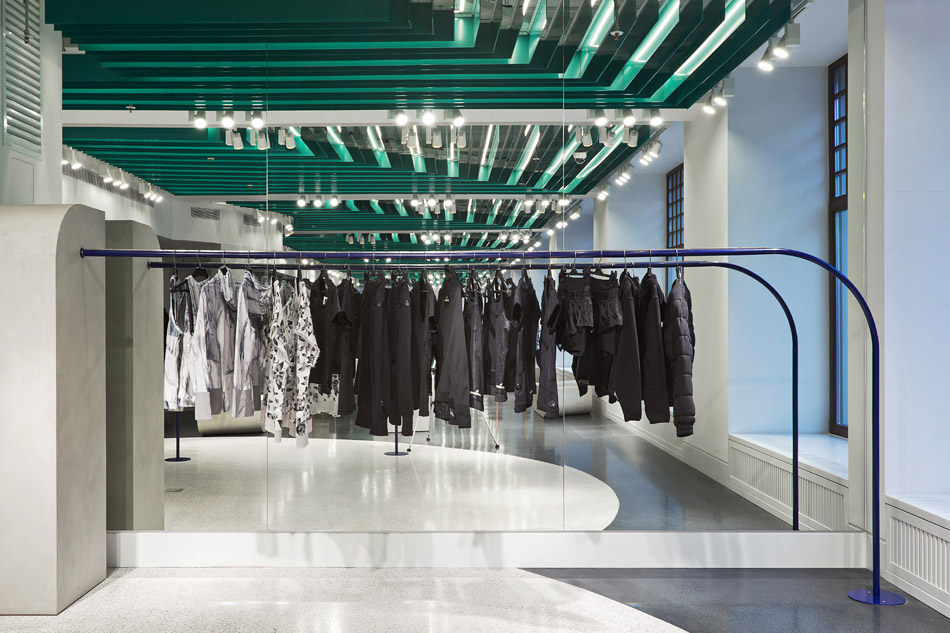 De Cárdenas and his studio custom-designed all the furniture and fixtures for Au Pont Rouge. Photo by Alexey Bogolepov

De Cárdenas claims that his work has become “a lot more quiet” over the past few years. “I’ve lowered the contrast,” he says. Indeed, his recent projects are more uptown than down, encompassing elegant residential projects in London and Paris for clients who prize anonymity, and a pale celadon yacht, on which he collaborated with the shipbuilder Wally. “The interiors are light and open,” he says. “It doesn’t look at all like a boat on the inside.”

In the offing now are a house in the Pacific Northwest made of concrete, cedar and blackened steel; a facade for a Kenzo store in South Korea; and a new space at 30 West 12th Street in Manhattan for the design gallery Demisch Danant, opening this month. Even after a solid decade of high-profile projects and wildly favorable press coverage, de Cárdenas still seems to be pinching himself. “I always feel like I’m getting away with it,” he says. “I’m so lucky people pay me to do this.” 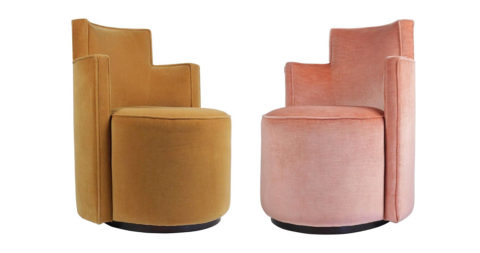 “These are so Art Deco, with the stepped-skyline rounded backs, but they also feel incredibly contemporary. Interestingly, they are neither, but that is the magic of Andrée Putnam’s timeless contemporaneity.” 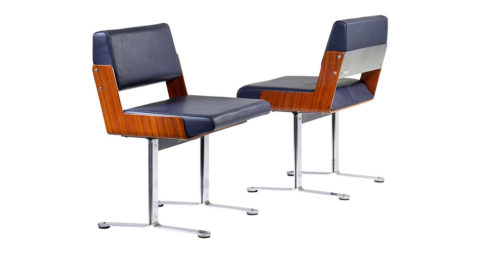 “These chairs feel very James Bond to me. They are sixties space-age finery.” 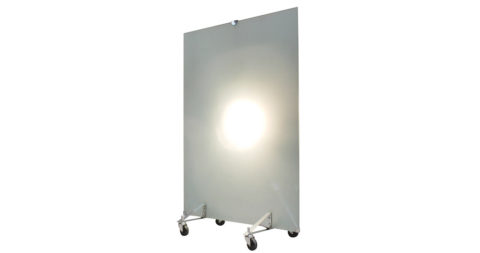 “This is the most bad-ass light in history.” 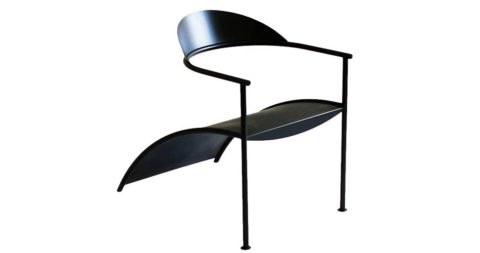 “This chair is sleek and aerodynamic, like a sportscar, but also romantically mannerist. The extending seat curving to the floor produces an interesting visual tension.” 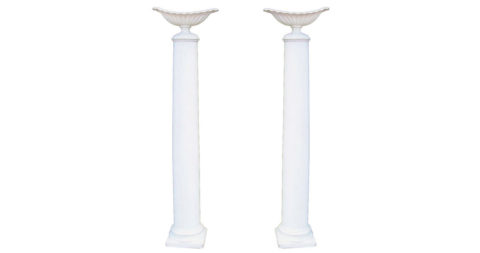 Shop Now
Pair of Serge Roche plaster torchieres, 1940, offered by Gustavo Olivieri
“Exuberant, classical but also golden age Hollywood in all its tackiness. I’d love to see these in a sparely decorated room.” 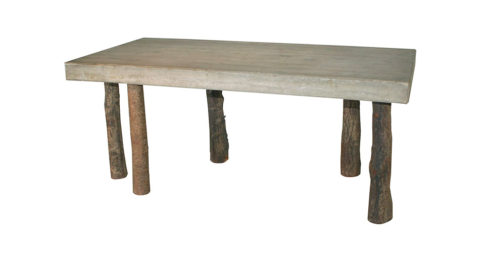 Shop Now
Jens Peter Schmid table, 1986, offered by Demisch Danant
“This table is beautifully clumsy. It looks like Hobbit furniture. I’d love to see it on that Chinese Deco rug.”