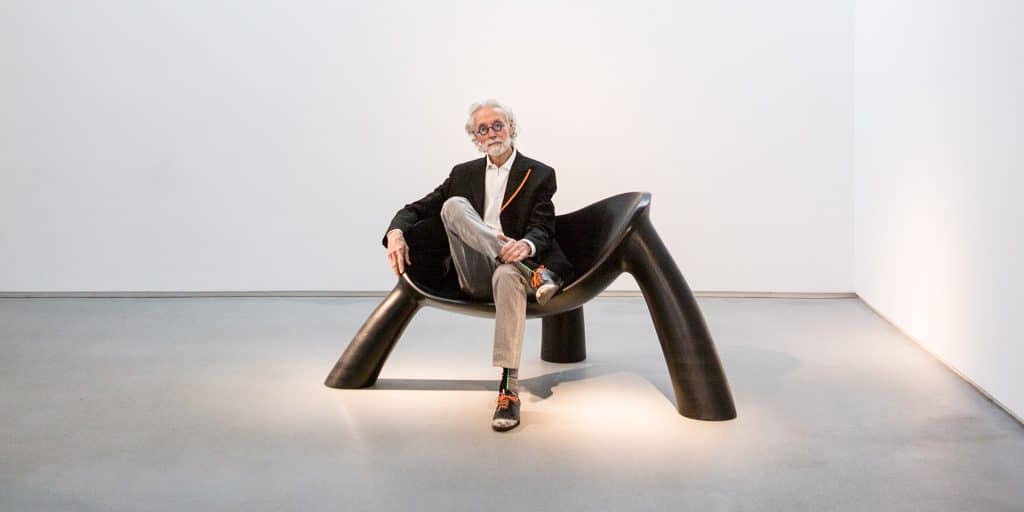 The visionary designer was the first to create pieces that functioned as furniture but looked like art. 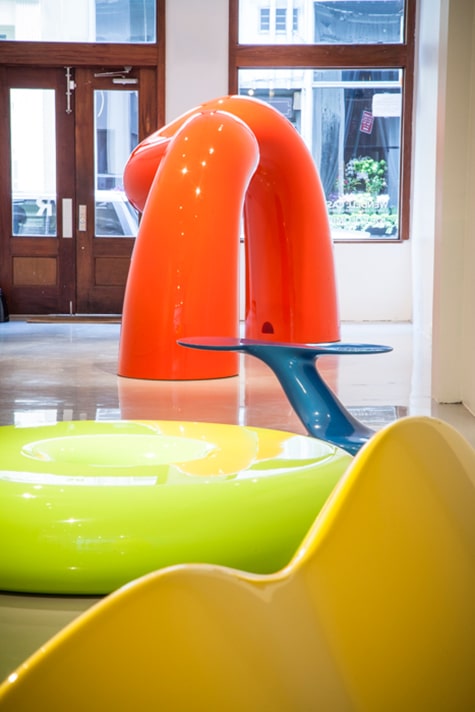 When Wendell Castle died last month at age 85 in his upstate New York home, the design world lost a true legend, perhaps the most influential and most individual furniture creator of the contemporary era. He erased the line between art and design, and the one between form and function. He was way ahead of his time. It’s taken us decades to catch up.

A native of Emporia, Kansas, Castle studied art and design at the University of Kansas. In 1962, he moved to New York state to teach at the Rochester Institute of Technology, where he remained an influential faculty fixture for decades while also working and traveling around the world. Eventually, his designs ended up in the collections of the Metropolitan Museum of Art, the Museum of Modern Art and the Victoria and Albert Museum.

From the start, Castle experimented with biomorphic natural forms, but always in the service of crafting useful pieces. His works had volume and sculptural heft. One of the founders of the Studio Furniture movement, he’s particularly known for his stacked lamination technique, involving thin layers of wood glued together. He worked, however, in all materials (among them fiberglass-reinforced plastic, which seemed the very antithesis of wood at the time) and became a canny user of high technology, including a large robot to help him sculpt. Anything in the service of a piece that engaged both the body and the mind.

I interviewed Castle last year on the occasion of a show of his new work at Manhattan’s Friedman Benda gallery, and he shared his thoughts about his life and career. After his death, I also gathered remembrances from important people in the field who knew him best. 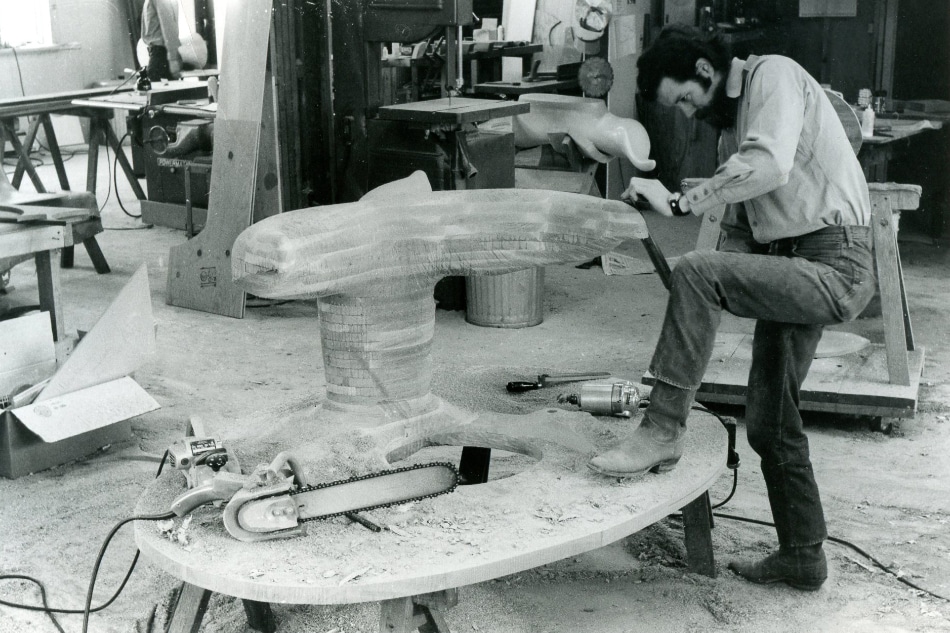 I don’t have a precise answer about where my forms come from. But if I’m making a seat, what supports the seat? And wouldn’t it nice to have some height? Chairs are normally low, so I exploded it here [referring to a piece from his “Free Form” series], and they got really big.

I think of this as sculpture. And then, I put the chair there and ruin the whole thing [laughs]. That’s what I do.

If I have to give another artist credit for inspiration, it’s Brancusi. But I like to have multiple references. One overriding thing in everything: It’s organic. They grow.

At my age, I’m not able to wield the chainsaw like my assistant, who’s thirty-five. I tell my assistants how I want it to look, and then they take it over. The thing I do one hundred percent is the models — no one helps. They are in foam on an architectural model scale.

In 1960, I was a graduate student in sculpture. I made this very weird chair — it didn’t look the least bit like a chair, and it was about as comfortable to sit on as a fence [chuckles]. It went into a juried exhibition at the Nelson-Atkins. I entered it as a sculpture, and it got in.

When my catalogue raisonné was being done, I found a catalogue for that early show. I had the most expensive piece in the show, at $1,000. And nobody bought it! I had priced it as fine art. I like staying in that little crack between art and design.

I wanted to be a sculptor. The day came that I decided to make furniture instead. What justified that in my mind was that I saw no difference — they should be treated the same. That was my goal. In the 1960s, if something had function, it couldn’t be fine art. But today, it’s different. 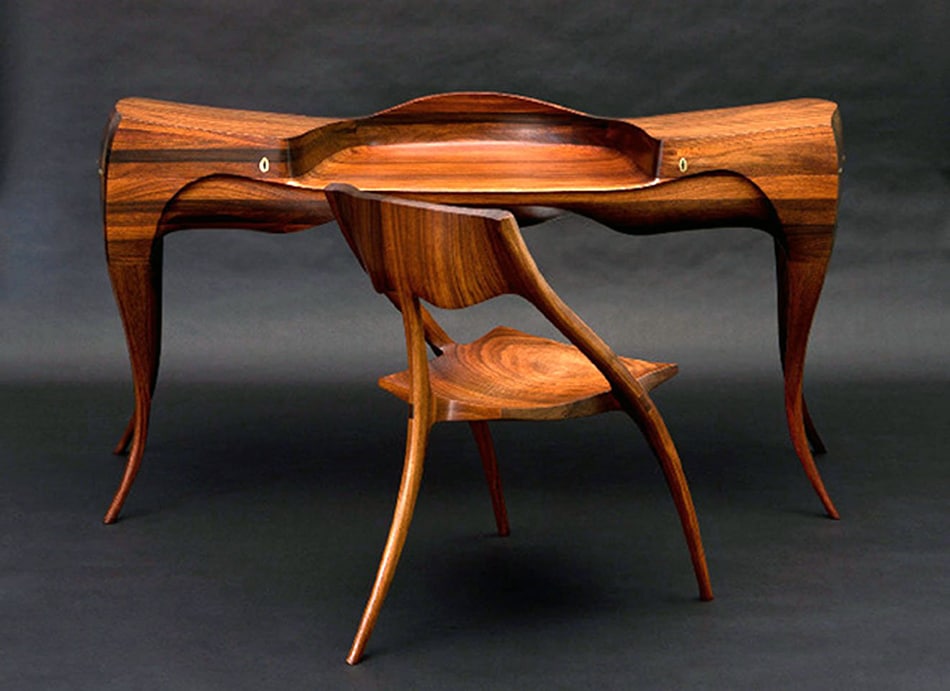 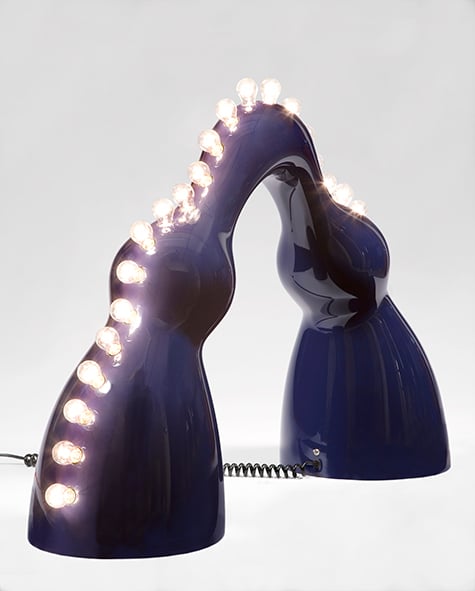 Castle designed the “Raquel” floor lamp series in 1969. This version, of gel-coated fiberglass-reinforced plastic covered in dark blue auto-body paint and with an illuminated spine, is one of eight examples made and signed by Castle along with the date 2009–2011. Photo courtesy of R & Company

Principal, R & Company, a lifelong Castle friend and a primary dealer of his work

I knew Wendell my entire life. If you can believe it, my parents were his dealers in Philadelphia in the late 1970s and early ’80s. I went to the Rochester Institute of Technology, and he was a teacher there. When I first moved to New York, I called Wendell and asked if I could buy one of his plastic chairs for my Bushwick loft, one of the first pieces of real design that I didn’t pick out of the trash. It was the Castle chair, bright yellow, with a side table built into it. I paid $1,000, which at the time was a lot of money.

The first show we did at R in 2002 was called “AutoPlastic: Wendell Castle, 1968-1973.” Donald Albrecht curated, and we spent so much time going through forty years of Wendell’s work. Plastic was the work people didn’t know. That’s what interested us. Everyone knew him as a woodworker, but he did these Pop art plastic pieces too. And then for “Wandering Forms,” the show I curated at the Aldrich Contemporary Art Museum, in Connecticut, my goal was to show the contemporary art world that Wendell was more than just a furniture maker. Form came first.

We had a great run. Wendell will be missed, but he will never be forgotten. Now, we start the next chapter: a deeper study of the work and celebrating how he opened the door for everyone.

Amy Lau Design, a friend since the late 1990s who employed many Castle pieces in her interiors work

He was the first one doing this art-design furniture. We didn’t even know what to call it. If you look at his work, the complexity is amazing, how involved the pieces are technically. Most people don’t know that he embraced new technology. He was using computerized systems and three-D modeling so late in his life — that’s what’s so impressive. He didn’t do the same thing over and over.

He was also the most incredible gentleman. The two most gentlemanly types I have known are Wendell and Jens Risom [who died in late 2016 at the age of 100]. Wendell was kind, interesting and really listened to you. 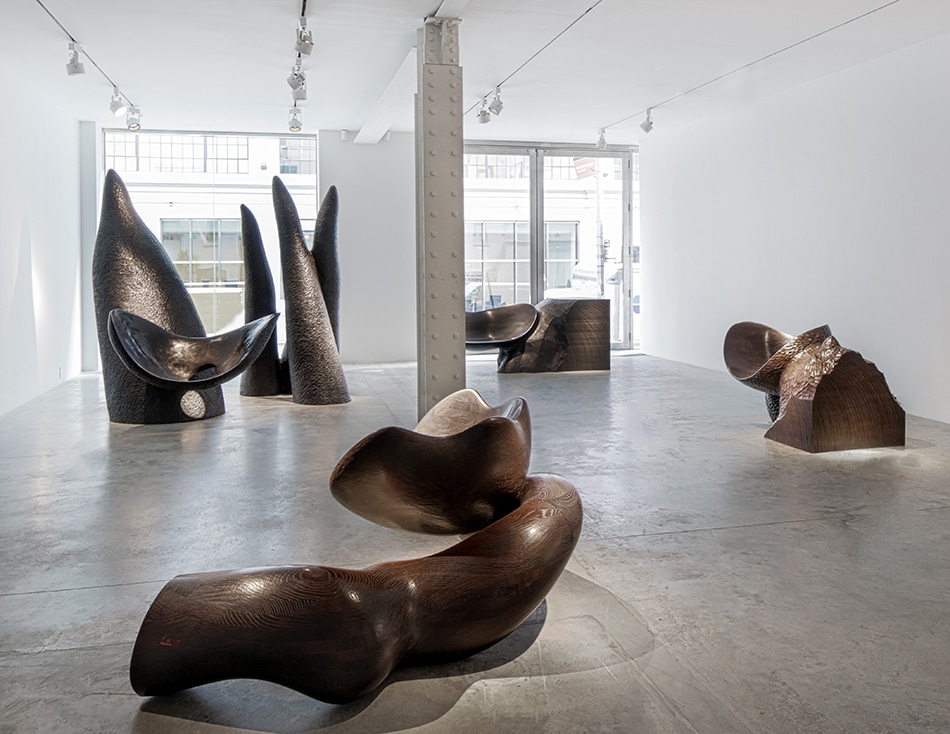 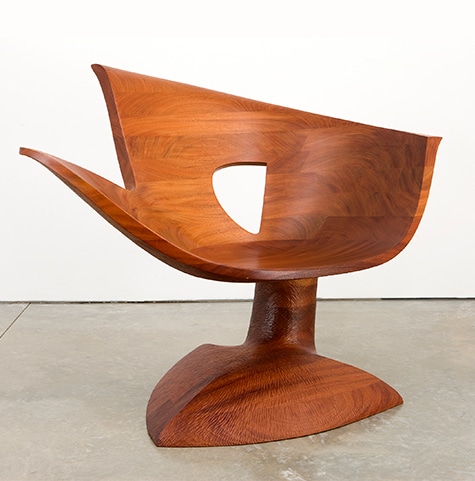 Principal of Friedman Benda, one of Castle’s primary dealers

I knew of him long before I met him, around 2003, and I thought of him as a historical figure, not contemporary. I admired him. I thought of it as meeting a legend, not someone I was going to work with. I didn’t think he was au courant. But he started showing me drawings, and he was proving me super-wrong. That was fast — he was ready for action!

We set about to change the perception of Wendell. The perception today is of him as a designer, and fifteen years ago, it was as a craft artist. He’s now seen as the innovative force that he was.

We had several layers to our relationship. One-on-one, he was very assertive, very strong about what he wanted. He said to me: “I just want to work. I just want to make things.” He gave me my mission statement after five minutes. In public, he was more shy. I just loved him.

Miami-based collector of Castle and other top artists and designers

I have a lot of Wendell! I counted, and it’s forty pieces or so. I have the first chair he ever made, the Student chair. It’s the beginning. It’s a brown wood piece, petite, not big and bulbous like the later works, but it has the curves. In a nutshell, Wendell, along with being an artist, was a great furniture maker, so when you sit in his pieces, they’re comfortable. That’s the punch line. I eat breakfast every morning at a 1970 stacked laminate table he did, and he later made me chairs to go around it. I take my socks off and rub my feet on the stacked laminate, and that’s sexy. He never lost sight of the fact that people want to use it.

In Aspen, I have a stacked laminate chair that is cantilevered out some three feet. I was worried about the far part of the cantilever, that it was somehow delicate. At one point, Wendell was visiting me, and he stood up on the chair and started jumping up and down! Without asking me! He said, “This is a fortress. You couldn’t damage it if you tried.” He never took himself too seriously. 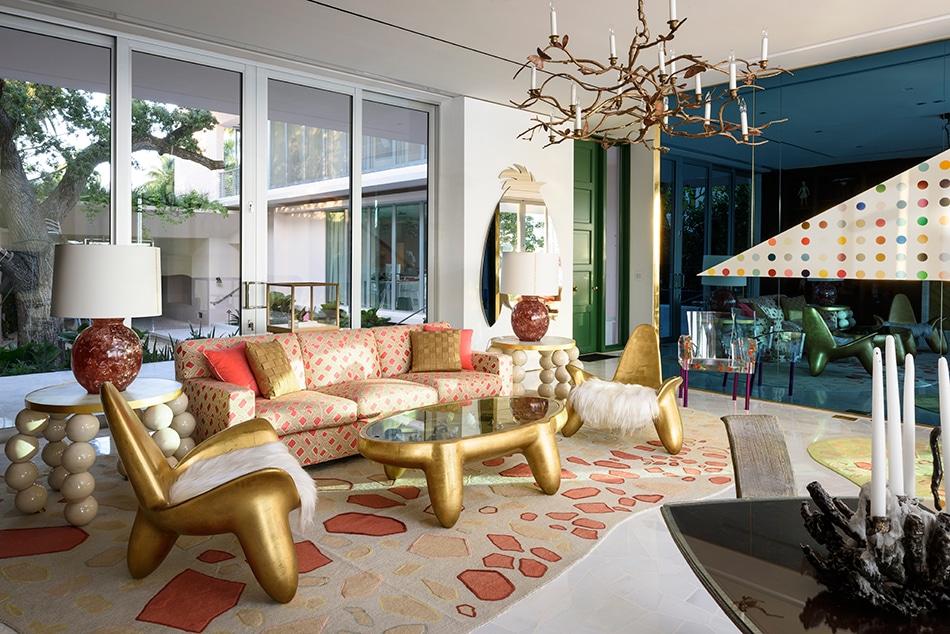 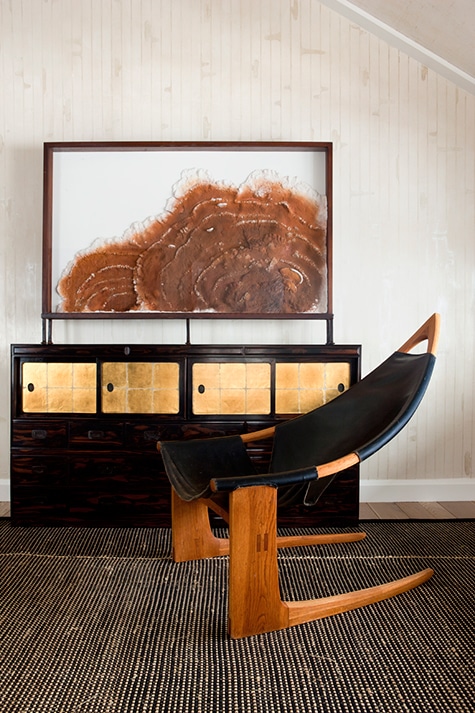 I have designed with his furniture a lot. Some of the work I had to warm to over time. At first, the works from the seventies I didn’t understand. But now, I have a great appreciation of that era, helped along by George Lindemann, one of my clients, who had so many early pieces. Then I started buying Wendell’s work for other clients. For a client who owns a townhouse in Brooklyn, I used three of the Cloud bookshelves. And I was so happy we did it. We didn’t want traditional bookshelves. We needed something sculptural.

These carvings he did, you wonder how they stick together! From an engineering standpoint, it’s incredible, and I’ve never, ever seen a Wendell piece with a condition problem or coming apart. That’s a quality that defined him.

Wendell came at it from the heart and the head. These iconic artisans weren’t safe, and the work wasn’t always immediately appealing to the consumer. It pushes buttons, and I like that. As with the Wiener Werkstätte, there are a few artisans doing amazing quality. The foam rises to the top, and I think Wendell was at the forefront of that.

Author and curator, former director of the Museum of Art and Design

Thinking about Wendell Castle now, through the sadness of his loss, I recall the old adage “the mind is a muscle.” He was such a hard worker, and his turn of creativity was so physical. Whether working at full scale, directly in wood, or in a drawing or model, he had an extraordinary, palpable sense of form. It was why you wanted to touch his furniture, to try it out. He decided to remain grounded in functional forms, not to be a pure sculptor, and I think part of the reason was that he valued physical contact. Look, for example, at the surfaces of his late works in stained ash or bronze. They are often beautifully textured, a soft modulation of the form that works on you both visually and through tactility.

Castle was so important for breaking down hierarchical stereotypes, most obviously between art, design and craft. At the very root of his practice was this more primary idea: that looking and touching could be equally important, equally intellectual, equally aesthetically satisfying. 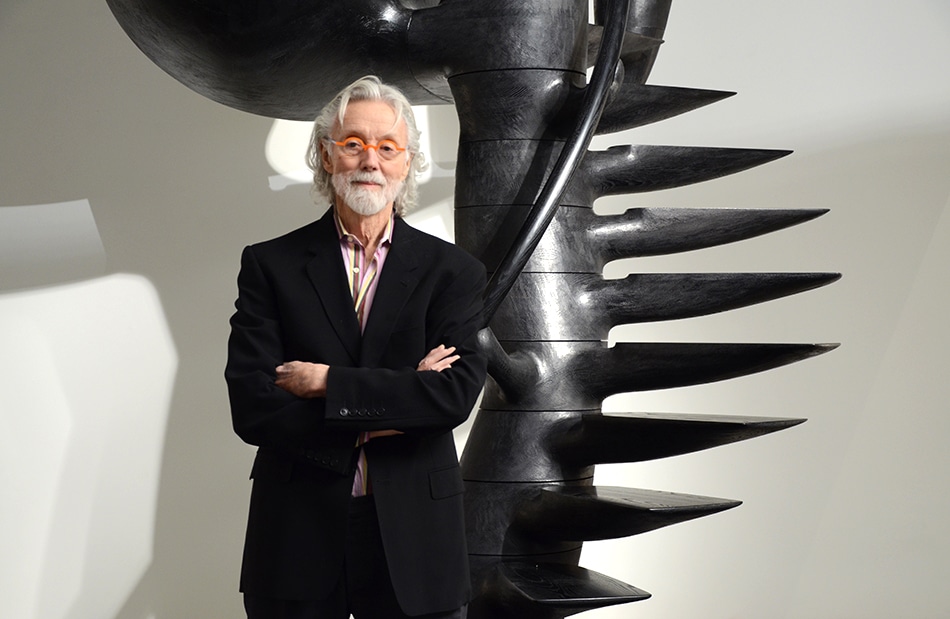 Castle stands with A New Environment, 2013, a two-story installation of stack-laminated works that includes a spiral staircase leading to a nest resembling a tree house. Portrait courtesy of Friedman Benda and Wendell Castle