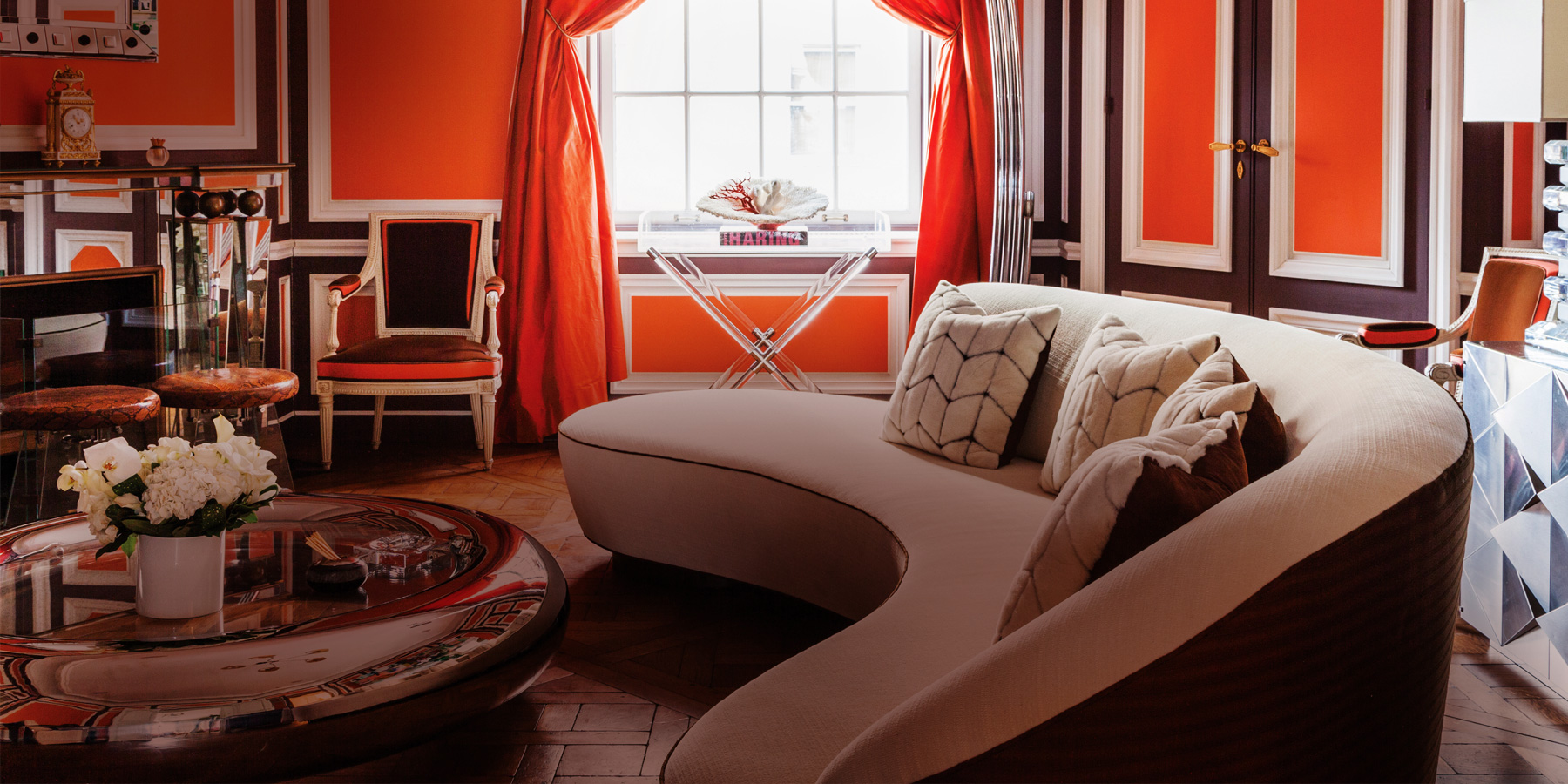 Grand yet comfortable, posh but playful, the homes the celebrated Robert Couturier creates for himself and his high-flying clients — now collected in his first monograph — prove that spaces need not be fussy to be fabulous. 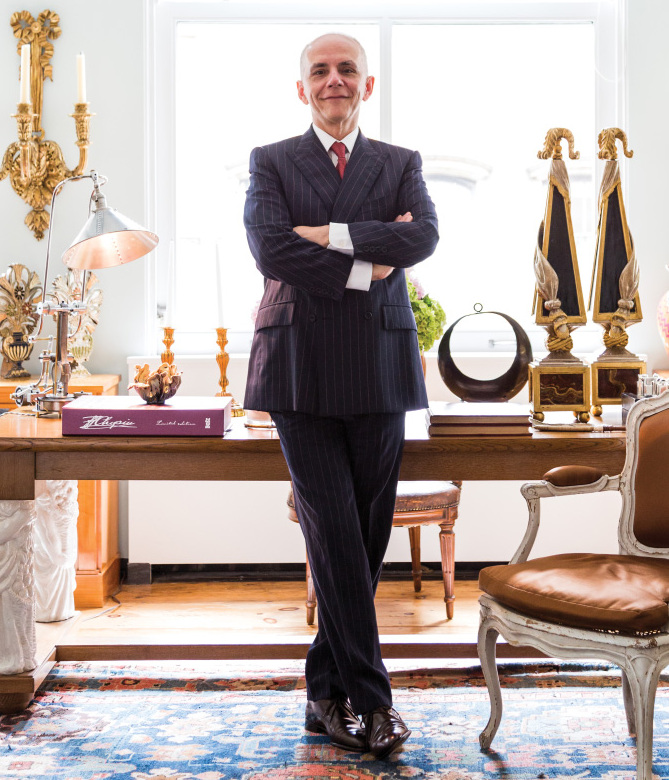 The designer leans against a table by Jacques Adnet and Maurice Savin in his New York apartment. Photo by Zach DeSart,  all photos courtesy of Rizzoli

If you have the good fortune to consider hiring Robert Couturier as your interior designer, you won’t need sketches or swatches to help you make a final decision. Simply finagle a dinner invitation to his house in bucolic Kent, Connecticut. You’ll know you’re in the presence of a true style connoisseur while enjoying cocktails in his living room, with its 17-foot-high tray ceiling and exquisite 18th-century French furniture, or feasting on sumptuous yet unfussy food in his orangerie-like dining room. Further confirmation comes when you observe your host not only presiding over the earthly paradise he’s created, but joyously engaging with it, too. Whether jumping into his guests’ wide-ranging conversations, generously serving a second helping of his signature dish, “Chaud-froid de poulet,” or just telling a story while his beloved dogs snooze in his lap, Couturier understands how to savor luxury without ever losing his sense of fun or the characteristic twinkle in his eye.

Couturier knows that the best spaces stem not just from a deep appreciation for history, but from a certain easy contentment with life. As he so aptly puts it in his new book, Robert Couturier: Designing Paradises (Rizzoli; $60), “Rooms are vividly tinted by the emotions that helped spawn them.” In the monograph ­— Couturier’s first — the French-born interior designer takes readers on a tour in words and pictures (Tim McKeough is his co-author; Tim Street-Porter took most of the spectacular photographs) of the homes he’s designed for himself as well as such clients as Jeff Koons and Amy Fine Collins. (Visit The Study to see photos of Collins and other Couturier fans and friends at a recent book party co-hosted by 1stdibs and Architectural Digest at Neuehouse in New York.) Here, 1stdibs’ Susanna Salk speaks with Couturier about several spaces in his new book and his secrets for creating rooms that are as comfortable as they are grand. 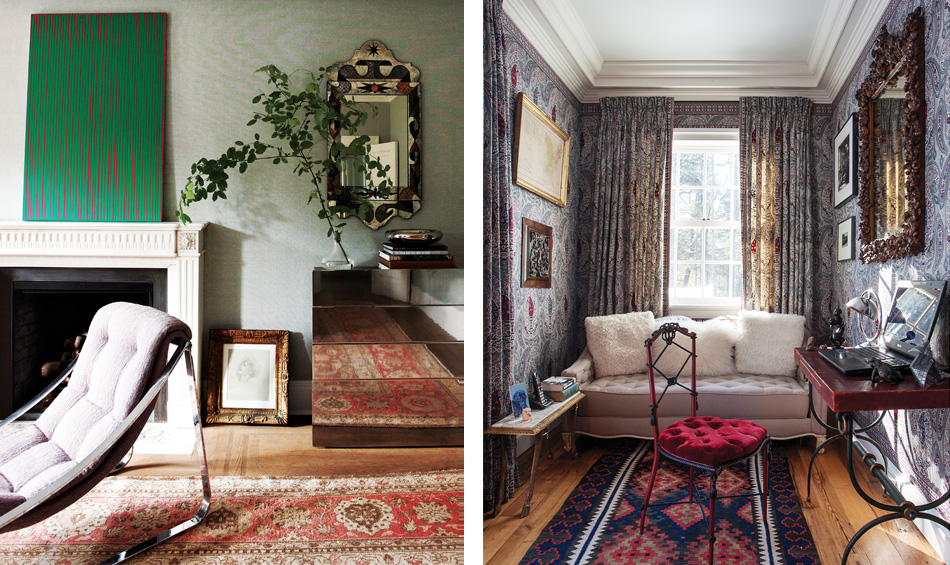 Left: In an apartment on New York’s Upper East Side, Couturier paired a 1960s French armchair with a mirrored Martin Szekely chest of drawers. The painting on the mantle is by Ian Davenport. Photo by William Abranowicz. Right: Couturier upped the intimacy of the small office in his Connecticut home by covering the walls in an Indian paisley by Le Manach. Photo by Tim Street-Porter 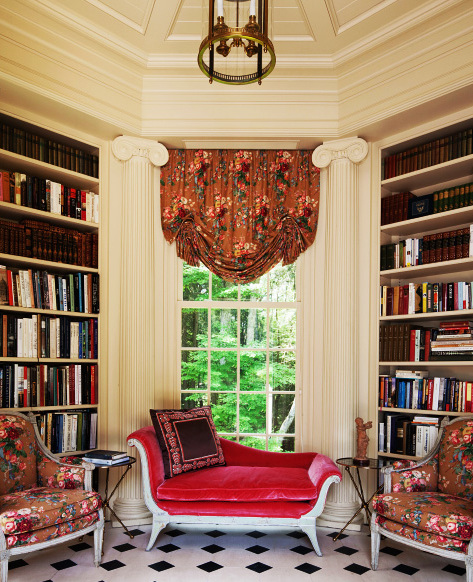 American columns from the 1820s frame a reclining chaise by Emilio Terry in Couturier’s Connecticut library. Photo by Tim Street-Porter

1. You constantly travel for work. In what ways are you grounded by your house in Connecticut, the first project shown in the book?

I don’t think I could run around the world for my clients the way I do if I didn’t have a home in the country. Mostly classic French, its style in some ways represents an imaginary idea of what my family house should have been. With its relative formality, it’s a house my beloved maternal grandmother — in whose Paris townhouse I lived my entire childhood — would feel at home. It’s a paradise that feels protected and independent, where the brutality of the world does not touch me or those I love. It is a place apart, not entirely related to what I do stylistically or decoratively, but it instead feeds my happiness.

2. You switched style gears for your New York apartment, mixing mid-century and modern art. How did you approach creating this urban oasis?

I am naturally much more inclined to mix all styles — modern and classic — than my country house indicates. In many ways, my SoHo apartment is more exciting than Connecticut, as it’s very much in the present. I have two floors, one being the office and the other the apartment. It was a very quick process to decorate: I think quickly and make up my mind immediately, but, if I don’t like something, I am not one to believe that things shouldn’t change. Rooms, like us, must evolve. 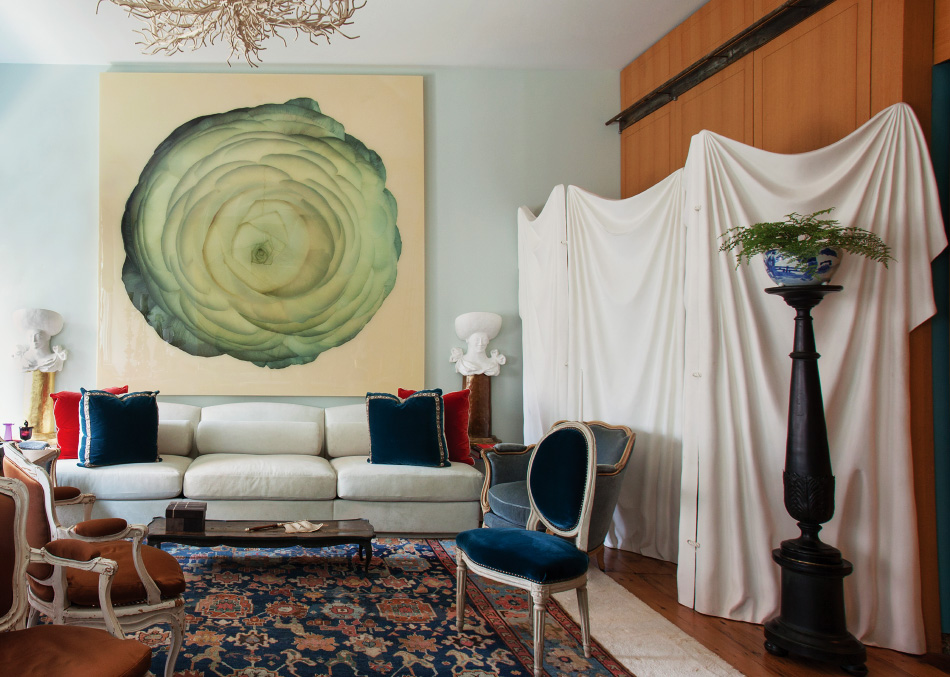 In the designer’s New York apartment, a photograph by Ron Agam hangs above a sofa Couturier designed himself. The 1930s cocktail table is by Frances Elkins. Photo by Tim Street-Porter 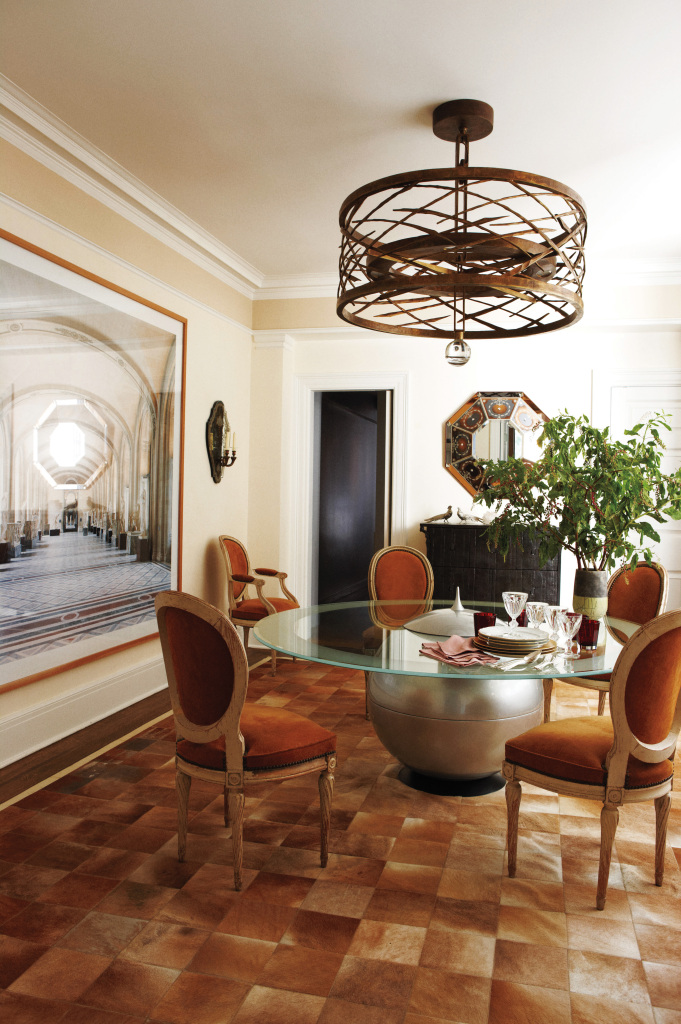 In the Upper East Side apartment, an Hervé Van der Straeten chandelier hangs above a 1980s Italian table, which is encircled by Maison Jansen chairs. The photograph at left is by Candida Höfer. Photo by William Abranowicz

3. You have a deep appreciation for European history, especially 18th-century France, but you never seem overly rooted in the past. How do you stay current?

I’ve always been voraciously curious, and I’ve always loved beauty in all shapes or forms, whether Indian, Moroccan, Persian or Western and Eastern European. I read the papers and new books on a variety of subjects. I go to museums and talk to my art-dealer friends and meet new artists. It’s a way to stay alive. I try to channel this curiosity into every project I create.

4. So many of your projects are of a massive scale: a 20,000-acre Mexican estate for your early patron, financier Jimmy Goldsmith, whom you refer to as a mentor, and, recently, a 10,000-square-foot town house in the West Village. What’s the secret to making such vast spaces feel homey?

Very large rooms can feel cozy. I remember spending some time at Ferrières, the Rothschild’s castle near Paris, and feeling quite warm and at home. The reason why European palaces look gorgeous is because they are filled with incredible works of art. It seems today that large spaces call for the accumulation of crap. A huge room should have architectural balance, proportion and equilibrium, and furniture should be laid out along an axis and be balanced as well. 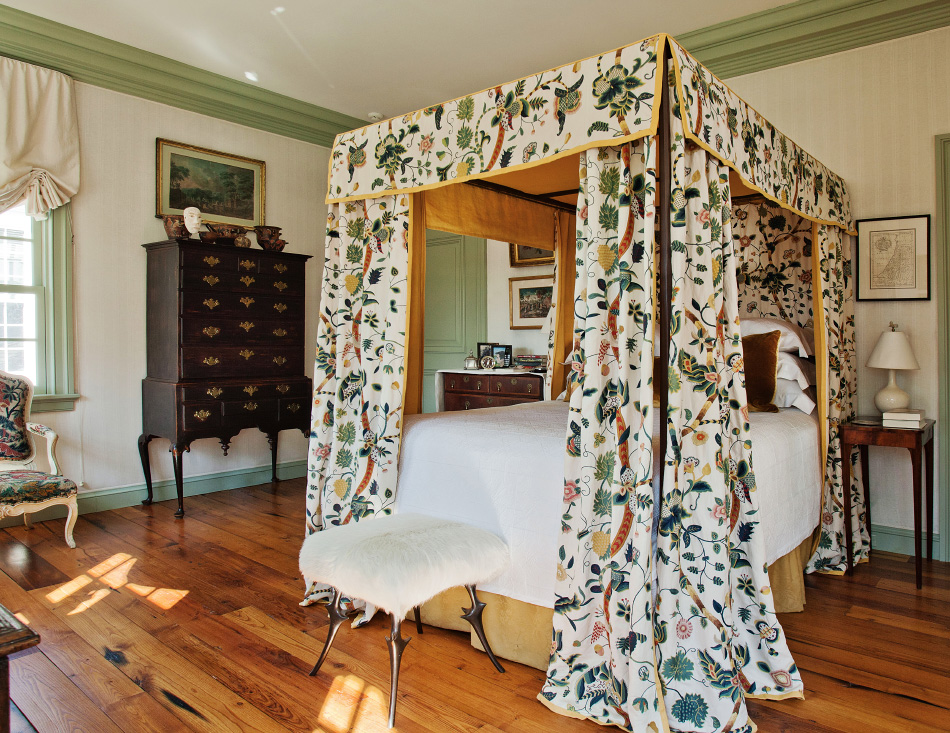 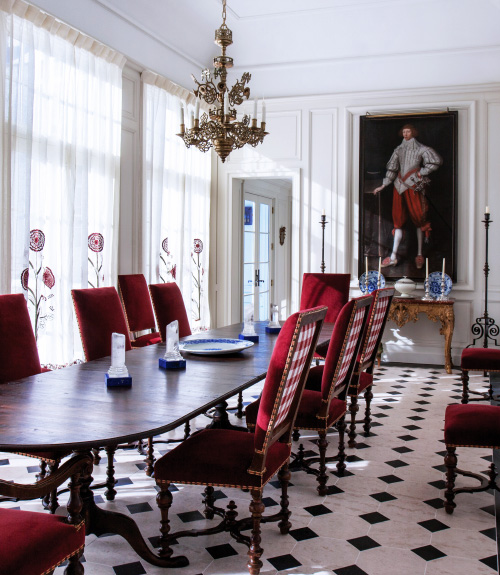 5. In the book’s introduction, you write that “a successful home can only be achieved through confidence, playfulness and humor.” For those of us not as fearless as you, how can we begin to achieve this type of success?

I always try to mix things that are not supposed to go together. Maybe the recipe is to allow yourself to make mistakes, as too much correctness is completely boring. My paternal grandmother was quite glamorous, and one day at a dinner party in New York, someone asked me about her style. Model and designer Maxime de la Falaise, who was across the table, suddenly said, “I knew Robert’s grandmother very well: She was not elegant; she was merely well dressed.” There was huge truth in that. Maybe if people strived to be elegant instead of just well dressed, decoration magazines would be less boring.