Since his first solo exhibition in 1980, Koons’s sculptures, prints and other works have been shown in major galleries and institutions throughout the world. His work was the subject of a major exhibition organized by the Whitney Museum of American Art, "Jeff Koons: A Retrospective" (June 27 – October 19, 2014), which traveled to the Centre Pompidou Paris (November 26, 2014 – April 27, 2015) and the Guggenheim Bilbao (June 9 – September 27, 2015).

Other exhibitions include “Appearance Stripped Bare: Desire and Object in the Work of Marcel Duchamp and Jeff Koons, Even”; “Jeff Koons at the Ashmolean”; and “Jeff Koons. Shine” at Palazzo Strozzi in Florence, Italy. “Jeff Koons: Lost in America” was on view at QM Gallery ALRIWAQ in Doha, Qatar from November 21, 2021 through March 31, 2022.

Koons is widely known for his iconic sculptures Rabbit and Balloon Dog as well as the monumental floral sculpture Puppy (1992), shown at Rockefeller Center and permanently installed at the Guggenheim Bilbao. Another floral sculpture, Split-Rocker (2000), previously installed at the Papal Palace in Avignon, Château de Versailles, and Fondation Beyeler in Basel, was most recently on view at Rockefeller Center in 2014.

Koons has received numerous awards and honors in recognition of his cultural achievements. Notably, the artist received the Governor’s Awards for the Arts “Distinguished Arts Award” from the Pennsylvania Council on the Arts; President Jacques Chirac promoted Koons to Officier de la Legion d’Honneur; former United States Secretary of State Hillary Rodham Clinton honored Koons with the State Department Medal of the Arts for his outstanding commitment to the Art in Embassies Program and international cultural exchange; and Consul General Ragini Gupta presented Koons the U.S. Consulate General’s Award for Cultural Diplomacy in Florence.

In 2017, Koons was made the first Artist-in-Residence at Columbia University’s Mortimer B. Zuckerman Mind Brain Behavior Institute and, also, made an Honorary Member of University of Oxford's Edgar Wind Society for Outstanding Contribution for Visual Culture. Koons has been a board member of the International Centre for Missing & Exploited Children (ICMEC) since 2002, and cofounded the Koons Family International Law and Policy Institute with ICMEC for the purpose of combating global issues of child abduction and exploitation and to protect the world’s children. 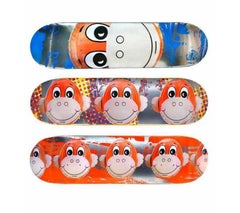 Balloon Dog (Blue)
By Jeff Koons
Located in Milano, MI
The work by Jeff Koons Balloon Dog belongs to a limited edition of 2300 pieces. The sculpture, made of blue glazed porcelain, comes with a certificate of authenticity and measures 27...
Category 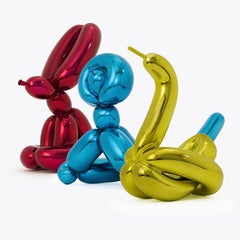 Puppy
By Jeff Koons
Located in New York, NY
Glazed white porcelain vase. Numbered 332/3000. With the artist's incised signature, date and edition number 1840/3000 on the base. Published by Art of This Century, New York and Par...
Category

Gazing Ball (Manet Olympia)
By Jeff Koons
Located in Montreal, Quebec
Sales can affect the inventory and the shipping time for works. Please contact the seller to confirm availability of works. Ed. of 20 Jeff Koons is an American artist known for his...
Category

Balloon Dog (Yellow)
By Jeff Koons
Located in Montreal, Quebec
Jeff Koons is an American artist known for his reproductions of banal objects—such as balloon animals produced in stainless steel with mirror-finish surfaces. He lives and works in b...
Category

BALLOON RABBIT (RED)
By Jeff Koons
Located in Aventura, FL
Signed and numbered on the underside. From the series Celebration, Balloon Animals. Produced by Bernardaud in Limoges, France. Sculpture in in mint condition and comes in original bo...
Category

Balloon Swan (Magenta)
By Jeff Koons
Located in Montreal, Quebec
Sales can affect the inventory and the shipping time for works. Please contact the seller to confirm availability of works. Ed. of 999 Jeff Koons is an American artist known for hi...
Category

Jeff Koons 'Balloon Rabbit, Balloon Swan, Balloon Monkey' 2019
By Jeff Koons
Located in Delray Beach, FL
Created in 2017, Jeff Koons’ balloon animals are comprised of metallic porcelain with chromatic coating. In terms of size, the Swan (Magenta) is, the Monkey (Orange) is , and the Ra...
Category

Jeff Koons 'Cracked Egg (Red)' 2008
By Jeff Koons
Located in Delray Beach, FL
This cracked egg was executed in 2008, as part of the edition for the Los Angeles County Museum of Art (LACMA), Los Angeles. It is unsigned as issued. Created over the years of 199...
Category

Monkey Train Decks for Supreme
By Jeff Koons
Located in New York, NY
A set of three individual screen-printed skate decks created by Jeff Koons for Supreme in 2006. Each with printed signature and inscription 'Monkey Train/JK' (on base of each deck),...
Category

BALLOON DOG (YELLOW)
By Jeff Koons
Located in Aventura, FL
Signed and numbered (signature and edition number are fired onto the back of edition). Edition of 2300. Original box and COA included.
Category

Jeff Koons 'Diamond (Red)' 2020
By Jeff Koons
Located in Delray Beach, FL
Diamond (Red) is a limited edition by Jeff Koons and is part of his iconic Celebration series, conceived in 1994. This work is in excellent condition and in an unopened box. Please c...
Category

1stDibs offers a wide variety of authentic Jeff Koons art for sale. If you are looking for art to add a pop of color to a neutral corner of your living room or bedroom, you can find work that includes elements of red and other colors. You can also search for art by Jeff Koons in ceramic, porcelain, metal and more by medium. Much of this artist's original work was created during the 21st Century and Contemporary, and is mostly associated with the Contemporary style. Not every interior allows for large Jeff Koons art, so small editions measuring 3 inches across are available. Customers interested in this artist might also find the work of Melanie Yazzie, Giuseppe Palumbo and Kevin Box. Jeff Koons art prices can differ depending upon medium, time period and other attributes. On 1stDibs, the price for these items starts at $350 and tops out at $135,000, while the average work can sell for $15,000.