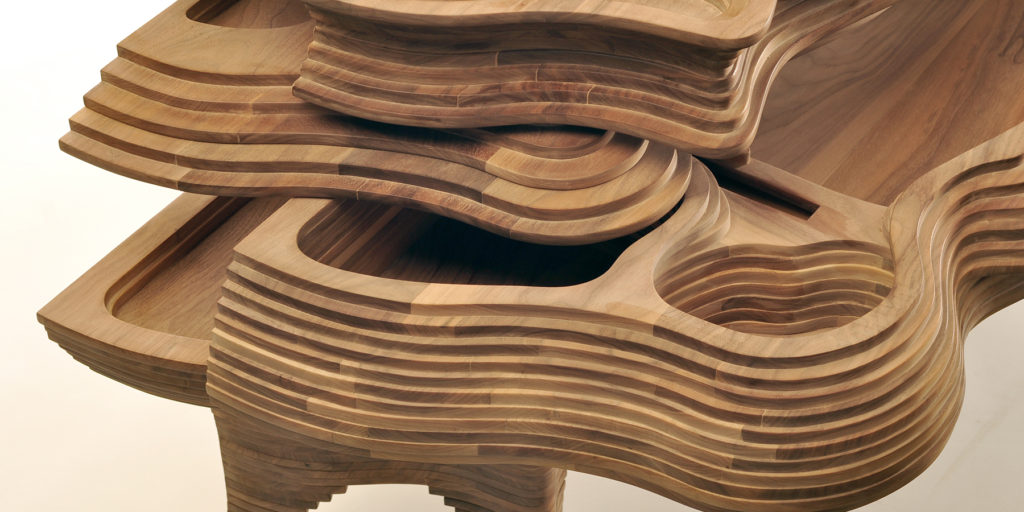 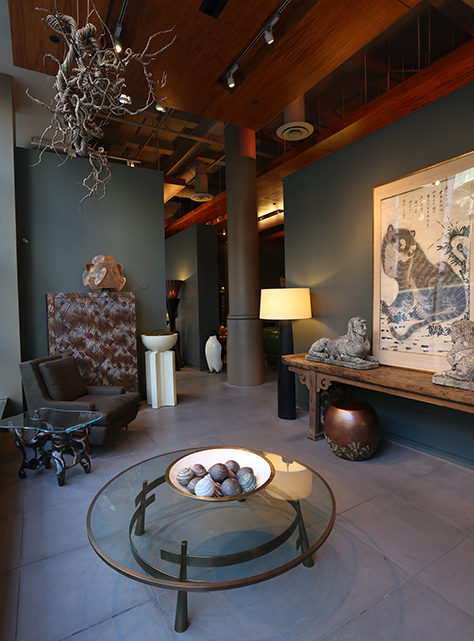 October 24, 2016A quartet of Los Angeles galleries — Blackman Cruz, Dana John, JF Chen and Robert Kuo — has brought works by contemporary L.A.-based designers to Manhattan for a show in Kuo’s Spring Street space through November 21. Top: Among the items from Blackman Cruz is this 21st-century take on a bombe chest. Photos by Frank Ritter, courtesy of Robert Kuo Gallery

Los Angeles is in the midst of a creative explosion, with a proliferation of wildly inventive interior designers — like Kelly Wearstler, Commune and Atelier AM — and a rising class of  innovative artist-designers, such as the Haas Brothers, Adam Silverman and Stefan Bishop. Now, four of the city’s most closely watched design galleries have banded together to present their unique ideas and discoveries in New York. “Robert Kuo Selects: Los Angeles Studio Made, Found and Represented Artists” presents top pieces from Kuo, Blackman Cruz, Dana John and JF Chen in Kuo’s Manhattan showroom through November 21.

The exhibition is the brainchild of Karen Kuo, Robert’s daughter and a manager of his business, who says she “wanted to bring something to New York that wasn’t there already.” She achieved this by focusing largely on contemporary talent unique to Los Angeles. Her father was excited about the idea, so the pair tapped L.A.-based interior designer Judith Lance, a longtime friend and client, to co-curate the show with Kuo.

“We wanted a unique point of view, but as far as antiques and vintage are concerned, you can see similar things in New York, Los Angeles, Chicago and elsewhere,” says Lance. “So we decided to make it primarily about contemporary workshop production from artists represented by the galleries, along with a modicum of vintage and antiques for balance. Especially in Los Angeles, the lines have become quite blurred between who’s a dealer, who’s an artist and who’s a fabricator. 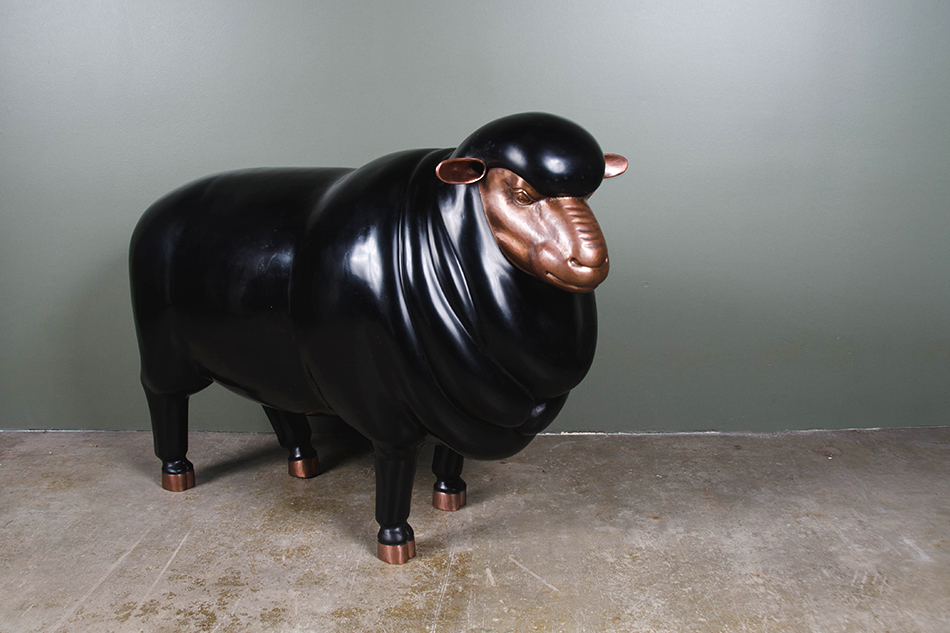 Kuo, who has several pieces from his own collection in the show, finished this ovine copper repoussé piece with black lacquer. 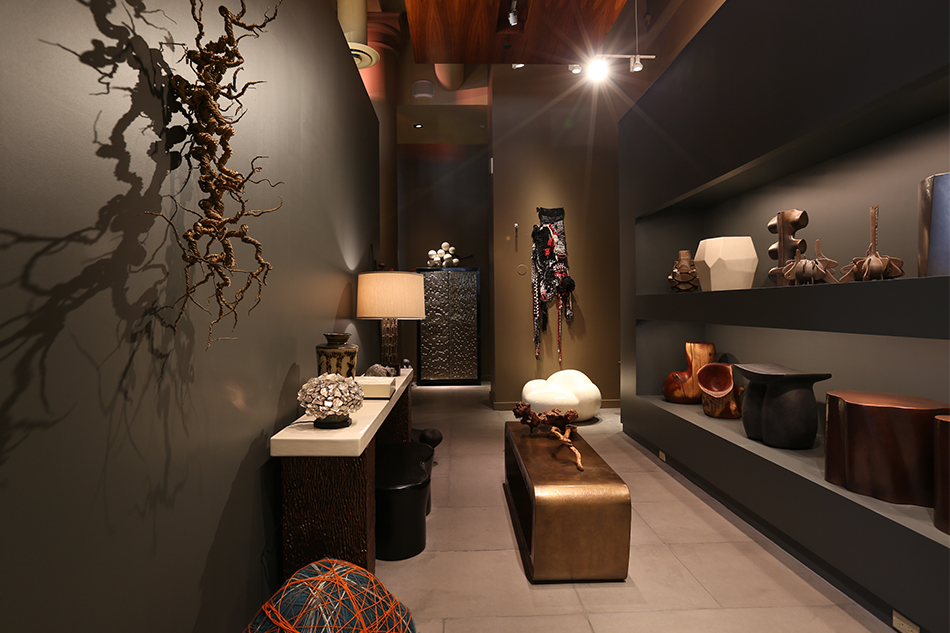 “Robert Kuo Selects: Los Angeles Studio Made, Found and Represented Artists,” as the exhibition is called, was co-curated by Kuo and L.A.-based interior designer Judith Lance. The sculptural bronze floor lamp, left rear, is from Dana John, as are the Titia Estes ceramic fin vessel and fin vessel with long neck on the upper shelf toward the foreground at right. The central piece is one of Robert Kuo’s O coffee table benches, this one in repoussé brass. 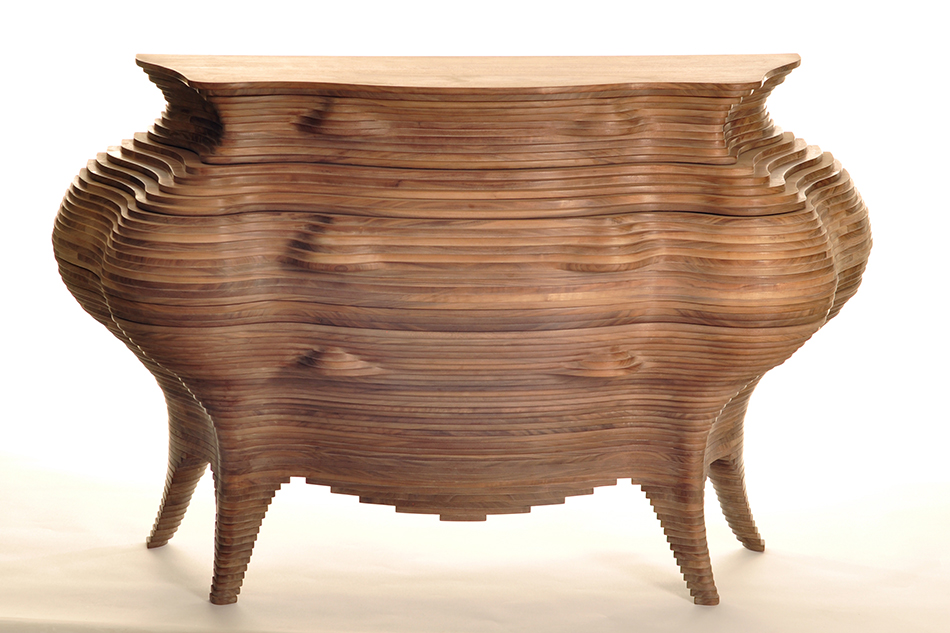 Made of stacked horizontal slices of walnut, the Blackman Cruz bombe chest is part of the gallery’s BC Workshop collection. 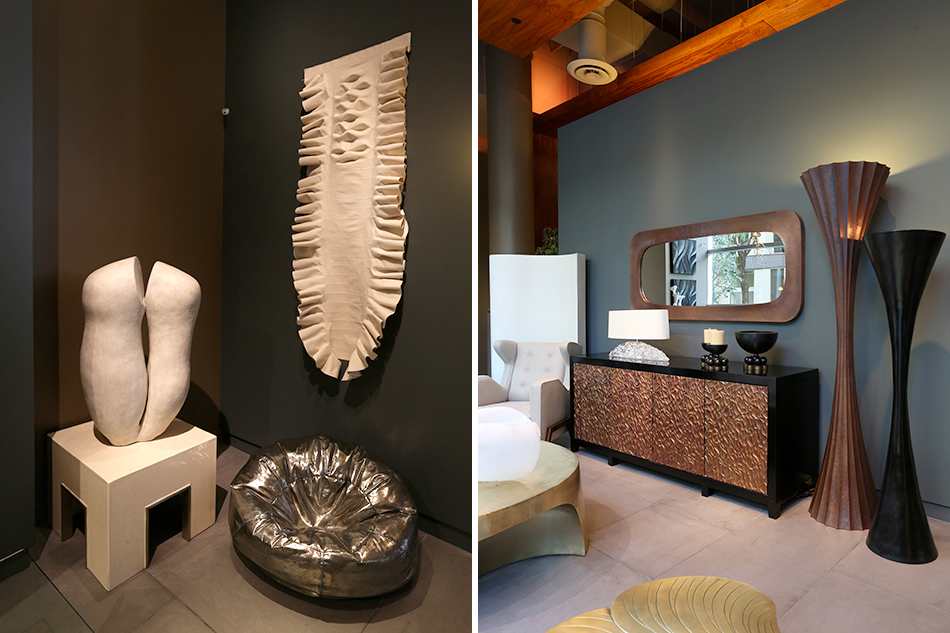 Left: A ceramic sculpture by JoAnn Patterson from J.F. Chen sits atop a cream-lacquer square side table by Kuo, while Mary Little’s unbleached canvas artwork Ennis-O’Sullivan, from Dana John, hangs above a Cheryl Ekstrom stainless-steel beanbag chair sculpture from J.F. Chen. Right: Kuo’s O mirror holds pride of place above his four-door buffet, on which sits his fish-shaped lamp; these are flanked by his cream-lacquer screen and Dana John’s Chair Three, to the left, and large Kuo torchères, to the right. 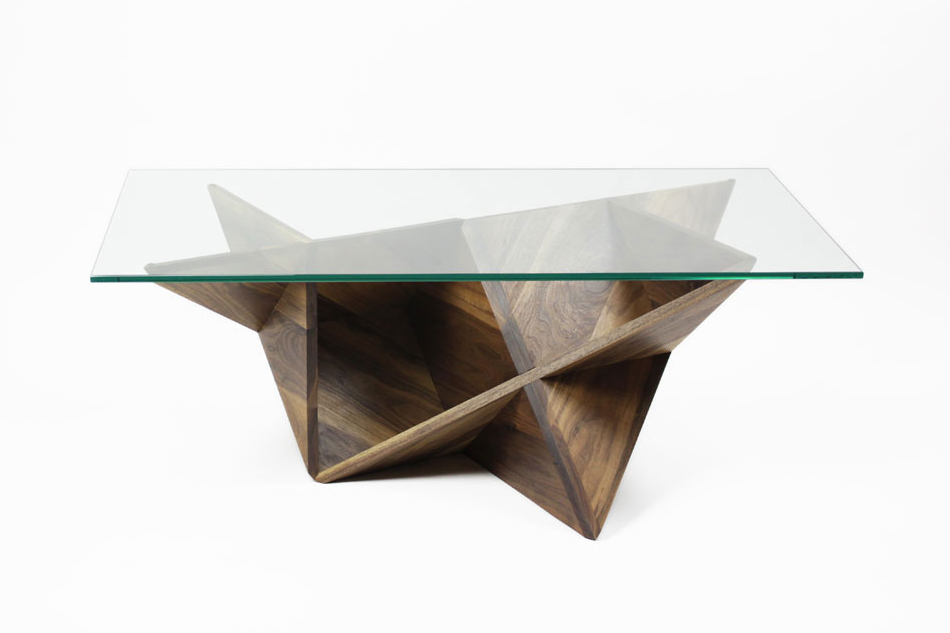 The walnut and glass T coffee table, 2015, is by Jae Won Cho, represented by J.F. Chen. 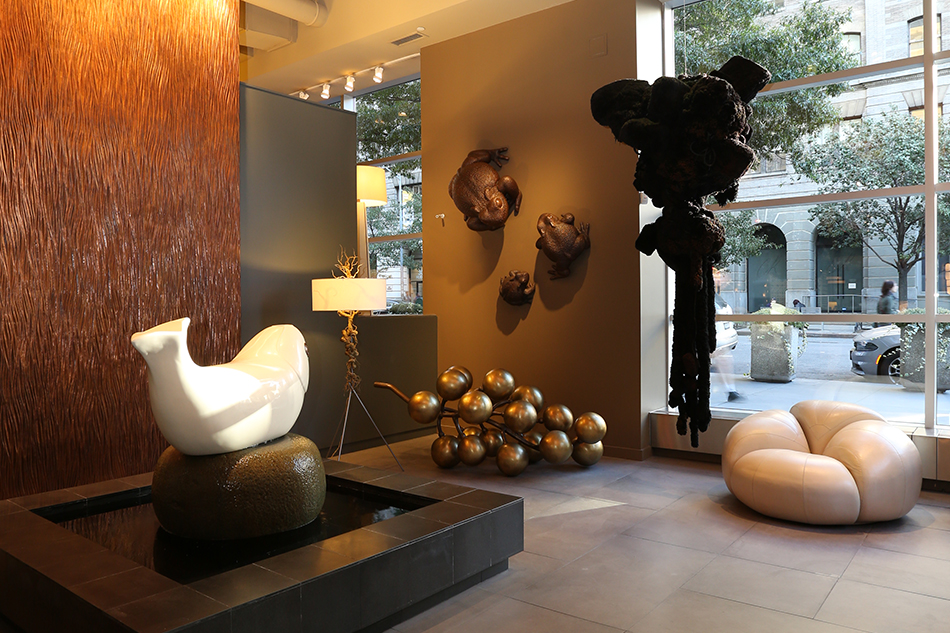 Pieces in the show include, from left: a Kuo Fish seat; a Mary Brogger twisted-wire floor lamp from Dana John; Kuo’s brass grape sprig and copper toads; Brogger’s From There to Black, made especially for the exhibit; and BC Workshop’s leather Peyote chair, an update of a design by Christian Adam whose form is inspired by the namesake cactus. 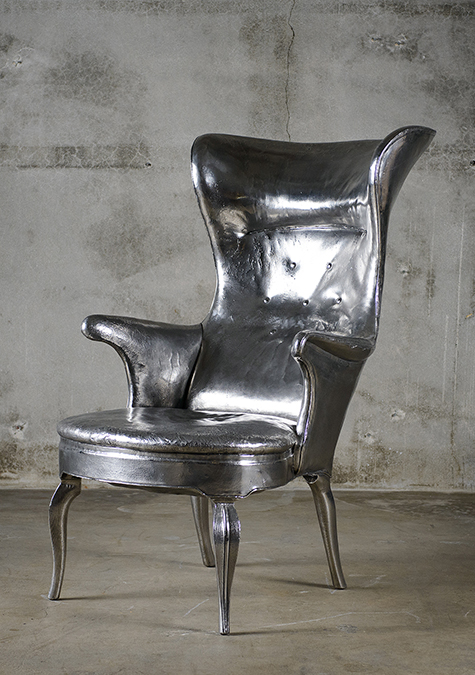 The exhibition bursts with intensely sculptural creations by artists and designers who are represented exclusively by the participating dealers. Dana John is showing muscular cast-concrete planters by ACRE, branch-like twisted wire wall pieces by Mary Brogger and chunky ceramics with organically shaped growths by Titia Estes, along with select pieces from the gallery’s own furniture line. From JF Chen come pieces like a new matte-black stoneware stool by JoAnn Patterson, an angular walnut coffee table by Jae Won Cho and a 2012 stainless-steel interpretation of a Frits Henningsen high-back wing chair by the late artist Cheryl Ekstrom. Blackman Cruz has pieces from its product line, BC Workshop, such as a brass-topped side table with bronze tree-trunk-shaped base, a bulbous leather chair inspired by a peyote cactus and an updated take on a bombe chest made from stacked horizontal slices of walnut.

Of course, Robert Kuo is represented as well. He’s displaying a special selection of the shapely, often whimsical, artisan furniture he began producing more than three decades ago, including an enormous 10-foot-tall cream-lacquer folding screen and a repoussé brass side table that references a cloud.

The objects are presented together, rather than separated by dealer — a configuration that demonstrates what might be possible if a collector were to go on an elaborate Los Angeles design-shopping spree. For the dealers, the exhibition represents an opportunity to collaborate with like-minded galleries they’ve long admired. “I thought it was a fantastic idea and was so excited, and honored, to be in the company of these people,” says Dana Lance, owner of Dana John and the husband of Judith Lance, the decorator who co-curated the show with Kuo.

“It’s a strong show, and we’re all very comparable” in terms of the level of material offered, says Joel Chen, owner of JF Chen. “I have often thought about creating an annex in New York, but it never happened, so this was a great opportunity.”

Although managing the varied ideas of four confident tastemakers could have easily led to conflict or delays, Karen Kuo says just the opposite happened. “The show has so many moving parts, with four very distinct, very unique brands. But it all came together very easily because everybody has so much respect for each other’s work.”

Shop the Show on 1stdibs 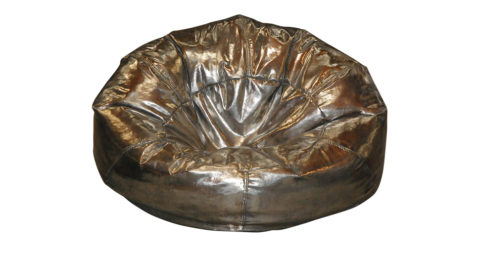 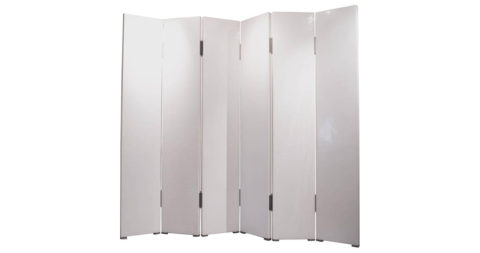 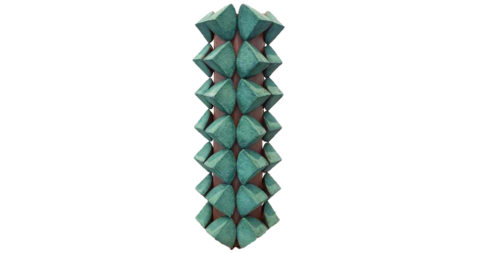 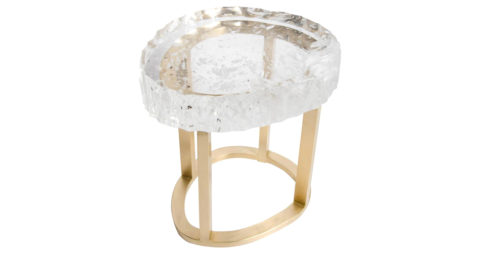 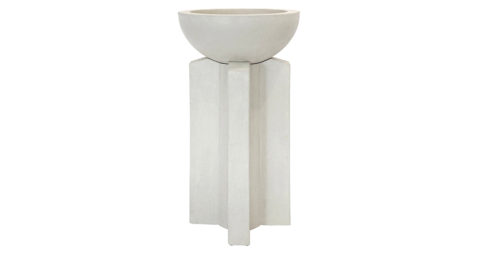 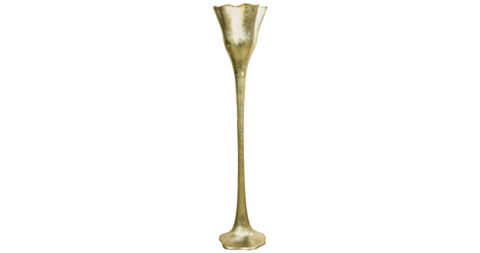 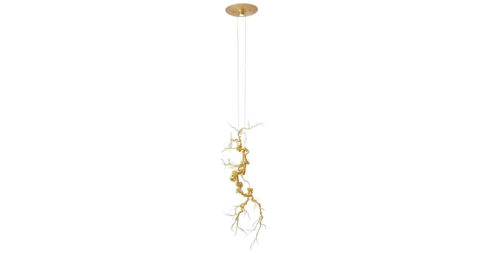 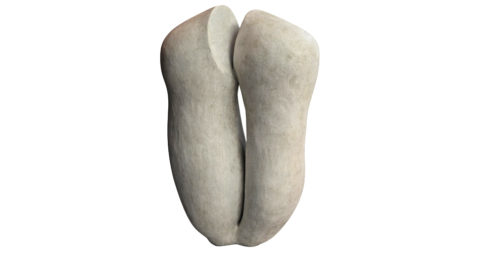 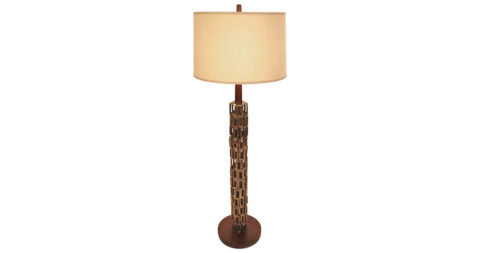 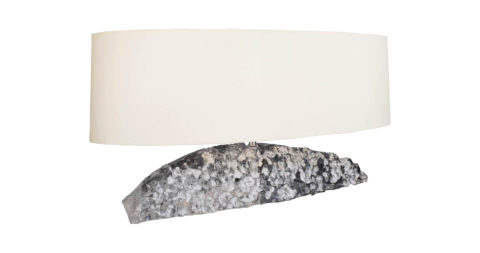 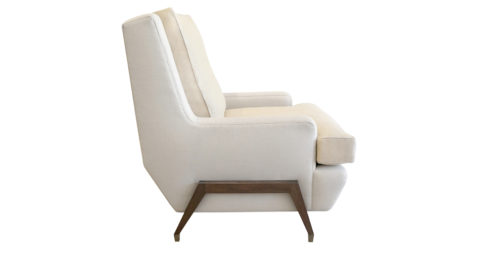